Length: 273 miles
Location: The trail runs along the spine of the Green Mountains for the length of the state of Vermont
Trail Type: End-to-End
Scenery: Classic eastern mountains with a surprising number of big views 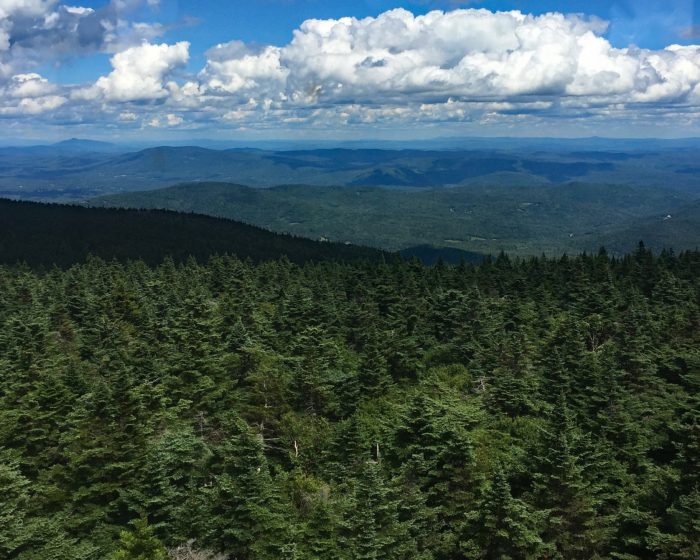 Operated by the Green Mountain Club (GMC), the Long Trail (LT) is the oldest long distance hiking trail in the country. Born in 1910, Vermont’s “footpath in the wilderness” runs the length of the State, from the Massachusetts border in the south to the Canadian border in the north. The trail shares over a third of its distance with the Appalachian Trail and was actually the inspiration for its longer, more famous cousin.

Along the way, the LT passes through six wilderness areas and over the top of 50+ named mountains. Both the views and the grades will take your breath away. This trail is not for the faint of heart. On the other hand, navigation is straightforward and both shelter and resupply options are plentiful. The Long Trail is both a great experience and a significant challenge.

The Southern Terminus of the Long Trail is located on the Appalachian Trail at the Vermont/Massachusetts border. The trail can be accessed via the AT by hiking north from the crossing of Mass Rt 2 between Williamstown and North Adams, MA. Another option is the hike the Pine Cobble Trail from Pine Cobble Rd in Williamstown to the AT just south of the Vermont state line.

The Northern Terminus, at the Canadian border, can be reached from North Troy, Vermont via North Troy/Jay Rd, Journey’s End Rd, then Journey’s End Trail. To return to the southern terminus, shuttles can be arranged to Burlington, which has bus service to Williamstown. Amtrak or bus trips can also be arranged. 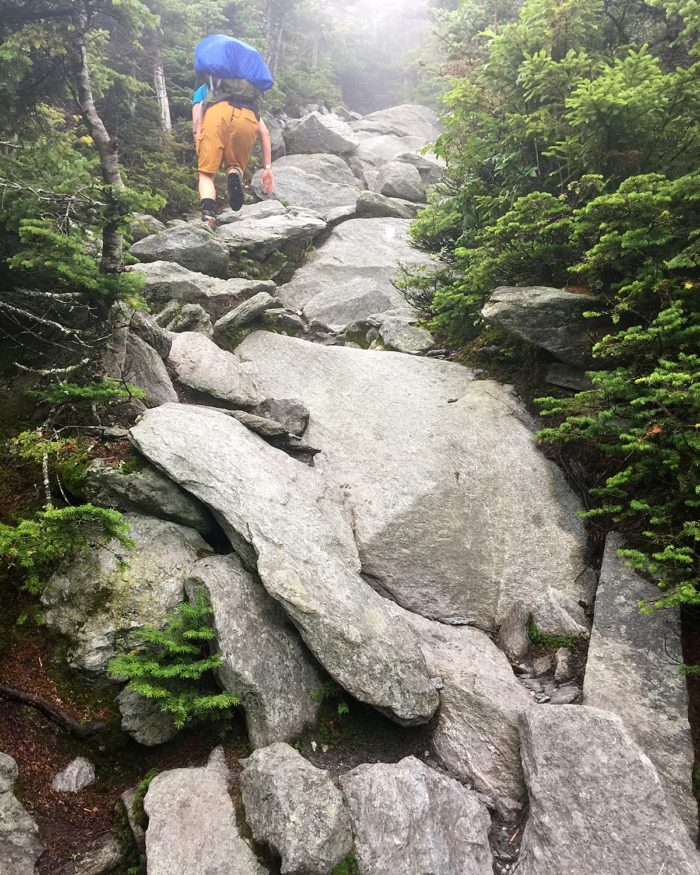 Because the trail runs the very spine of Vermont’s Green Mountains, there are regular opportunities to enjoy open vistas. Besides the bare peaks of Camel’s Hump and Mt. Mansfield, several other mountains crossed function as ski resorts in the winter. The cleared ski slopes reveal more scenery than typically found on other east-coast mountains. Some of the mountaintops are locations of fire towers, resulting in even better panoramas. Stratton Mountain is one such spot. It was on that mountain that Benton McKaye conceived of the idea of the Appalachian Trail. 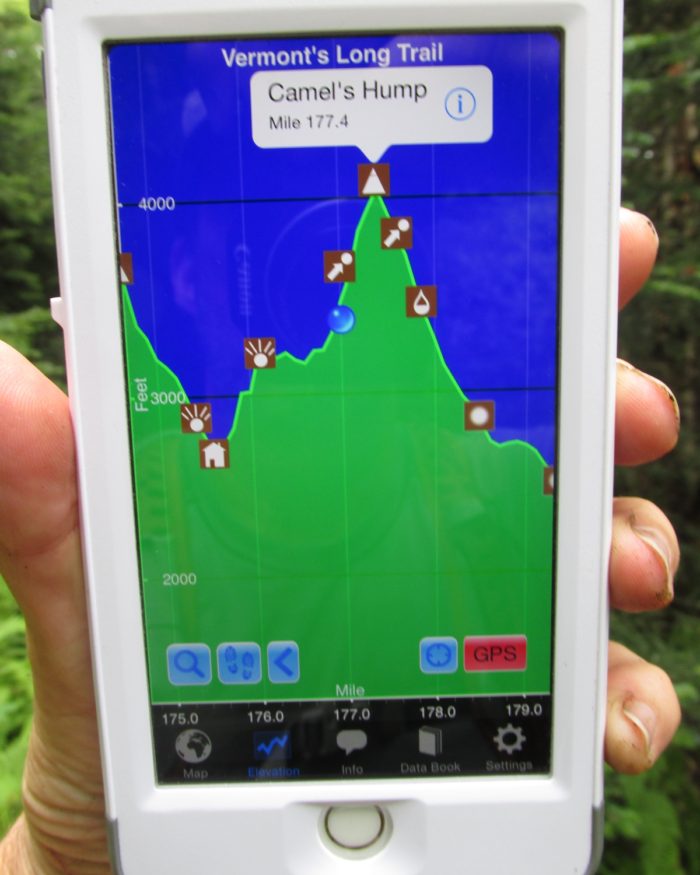 There is a price to be paid for the views however. This trail averages an elevation change of 500 feet per mile, nearly a 10% grade. In addition, the northern portion of the trail contains more than its fair share of topographic challenge. There are many slopes where hiking involves climbing ladders or metal rungs drilled into rock walls. There were spots where I saw the white blazes and thought someone had to be kidding. At one point, I lowered myself down a rope to get to a ladder bolted into the rock.

Some of the steepest slopes are over a slick rock known as Schist. When it is wet, traction is difficult at best. Dropping off Camel’s Hump in the rain, I was in deep Schist, falling repeatedly. (Switching to shoes with “Megagrip” rubber from Vibram made a huge difference for me.) Oh, and the famous “Vermud” does exist.

Why Hike The the Long Trail 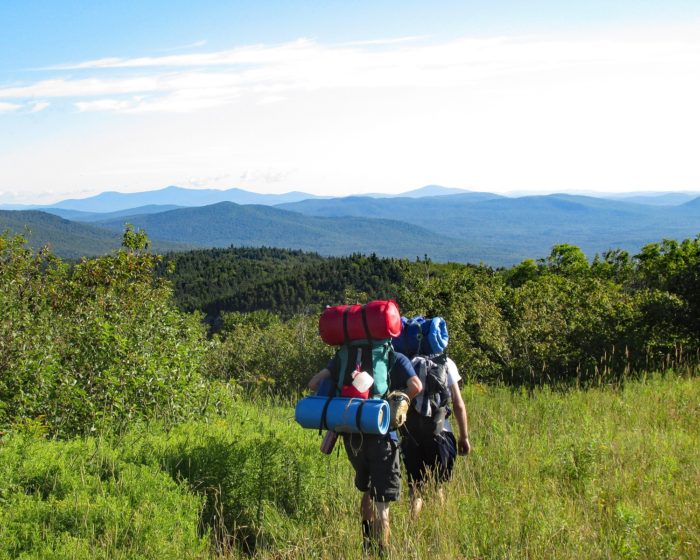 Beyond the history of walking America’s first long distance hiking trail, the southern 100 miles are perfect if you are looking for an AT-type experience. In fact, that stretch of the trail is shared with the AT. There are numerous shelters, plenty of company, nearby resupply and abundant vistas. One first time section hiker loved the atmosphere; telling me, “Even though I’m hiking alone, I never felt like I was ever really alone.”

Once north of the AT/LT split however, the trail becomes significantly more demanding. The crowds disappear and the hiking gets much more rugged. It was on the LT that I realized that backpacking could be an adrenaline sport. If just going backpacking is not enough of a challenge, the Long Trail is for you. Plus, you get to walk to Canada. 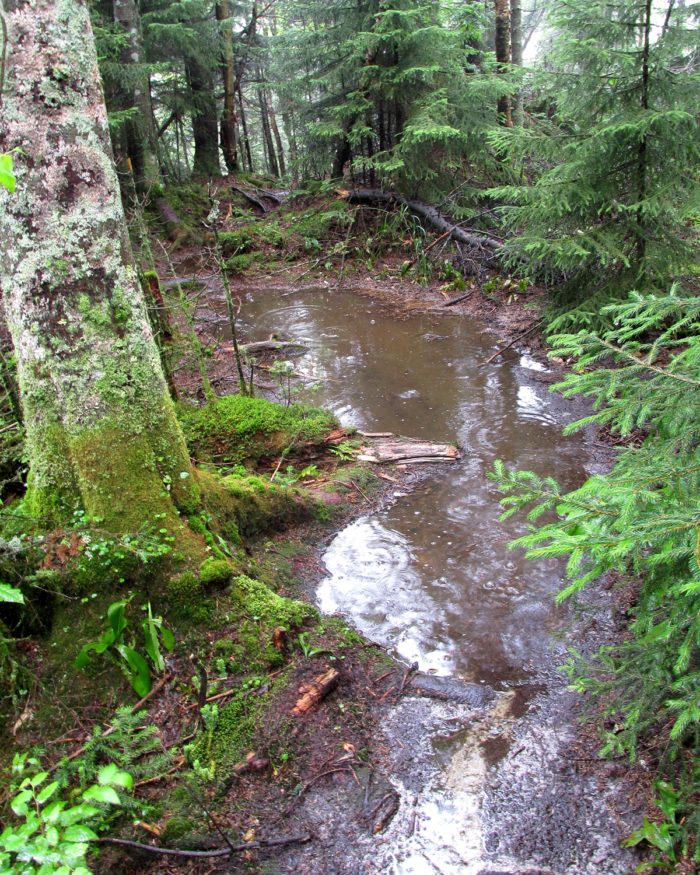 There is actually a “Mud Season” in the Green Mountains and several of the higher elevation portions of the trail are closed in the spring until Memorial Day Weekend. Insects can also be an issue in late spring or early summer. The Long Trail Guide states, “Black flies and mosquitos can make hiking the Green Mountains uncomfortable and sometimes unbearable.”

My personal feeling is that the best time of the year to hike the Long Trail is September or early October. The bugs and crowds are mostly gone and the Vermud is at a minimum. The temperatures are typically pleasant as well. For example, the average daily temperature range on Mount Mansfield in September is 42-56.

For those wanting warmer temperatures, August is also mostly bug free. However, at least on the section shared by the AT, shelters are often full as many AT NOBOs and SOBOs are crossing the state in that timeframe.

Regardless of the month, plan on dealing with some rain. The Green Mountains are high enough to affect the weather; squeezing extra precipitation out of the clouds. At the highest point on the trail, Mount Mansfield, expect about seven inches of rain during any month that the LT can be hiked. 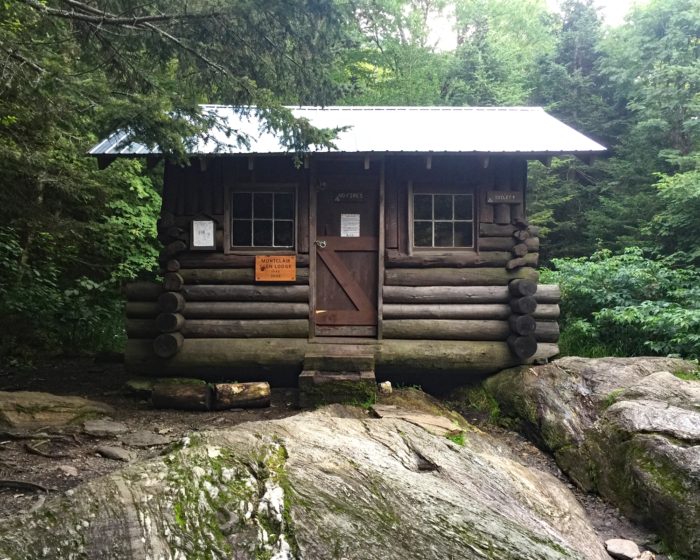 Montclair Glen Lodge. A close-up would reveal bear scratches on the door.

Camping logistics are pretty straightforward. There are over 50 three or four sided shelters on the LT and all of them have nearby water sources, spots for either tents or hammocks and a privy. (You can leave that “poop” shovel at home.) A few of the more popular sites have a caretaker and a small ($5) charge to camp, but most are free and no permit is required. During the summer, the shelters on the portion shared with the AT can often be full; or overfull if it’s raining. By contrast, while hiking the northern section in October, I generally had each shelter to myself.

Staying at the established areas is highly encouraged. But, if you’d rather camp away from the shelters, a hammock would be a better choice. There are many more well placed trees than there are flat spots. Be aware that only the established shelter/camp areas are to be used where the trail is above 2,500 feet. The higher alpine stretches are too easily damaged.

A water source is available near every shelter/camp area though a few may fail during dry weather. In addition, there are numerous creeks to cross during the hike. Water availability is generally not an issue, though all sources should be treated before drinking. 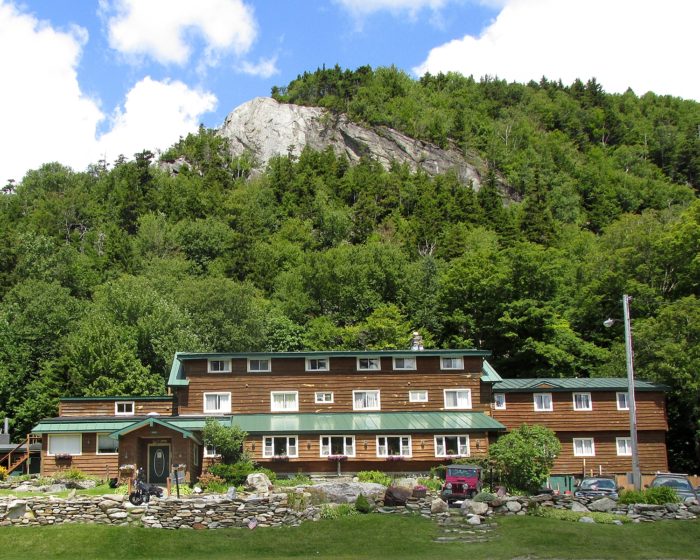 Inn on The Long Trail

There are an abundance of resupply options with many being “easy” hitches from trail crossings. If a bearded guy in his 50’s could get a ride within ten minutes, I’m calling it easy. In fact, once I decided to just road walk into a resupply and someone pulled over and asked if I wanted a ride. (The communities near the trail seem to be very hiker friendly.)

In addition, I actually resupplied at a couple of ski resorts. Stratton Mountain and Jay Peak resorts can be reached by just walking down one of the ski runs (or take the lift if it’s running).

Inn on the Long Trail is a great stop. It can be walked to, will hold a resupply box and offers lodging discounts for hikers. Until the trail was rerouted several years ago, the LT led right by the door. While no longer the official route, the trail still exists. 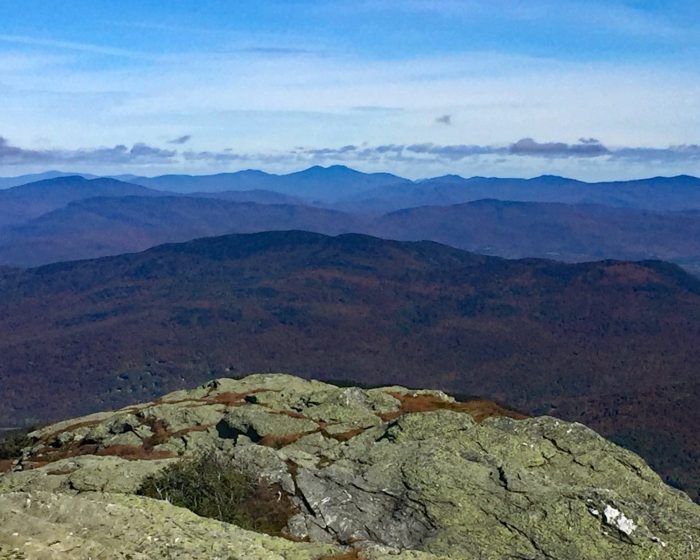 View north from Mount Mansfield, highest spot on the trail and in Vermont

For those longing for an extensive AT type experience but, for whatever reason don’t see a 2,000+ mile thru-hike happening, consider a thru-hike of the Long Trail. Despite the shorter distance however, don’t underestimate the challenge of this trail. Elevation changes, slick rocky sections and shoe sucking muck conspire to make this one tough trip. I would not make this your first long hike. As with most adventures though, the rewards are worth the effort.

For more information, the Green Mountain Club (GMC) is a great resource. Besides an informative website, they sell a detailed guide, a shorter End to Ender’s guide, and an excellent hiking map. The GMC has a program connecting prospective thru-hikers to mentors that have successfully made the trip. In addition, they can get you in touch with volunteer shuttle drivers. For those interested in reading more about the struggles and rewards of this hike, I’m partial to this short book on the Long Trail.