Via Dinarica Week 5! Halfway Thru.

A long day of pounding pavement and dirt track.

Gračac was a sleepy little town, but a couple of cafés were open, as was the bakery (which had these huge sandwich rolls, like Swiss cakes, that I hadn’t seen before and I definitely snagged one for lunch!) so after coffee and a pastry I hit the road.

The first few hours I hiked along a paved highway with not a lot of traffic or any shoulder.  Eventually I neared the top of the hill and the trail split off the highway and followed a dirt track for some miles.  I stayed along the lower flat road and skipped a small summit knowing I had a long day to get to Knin. 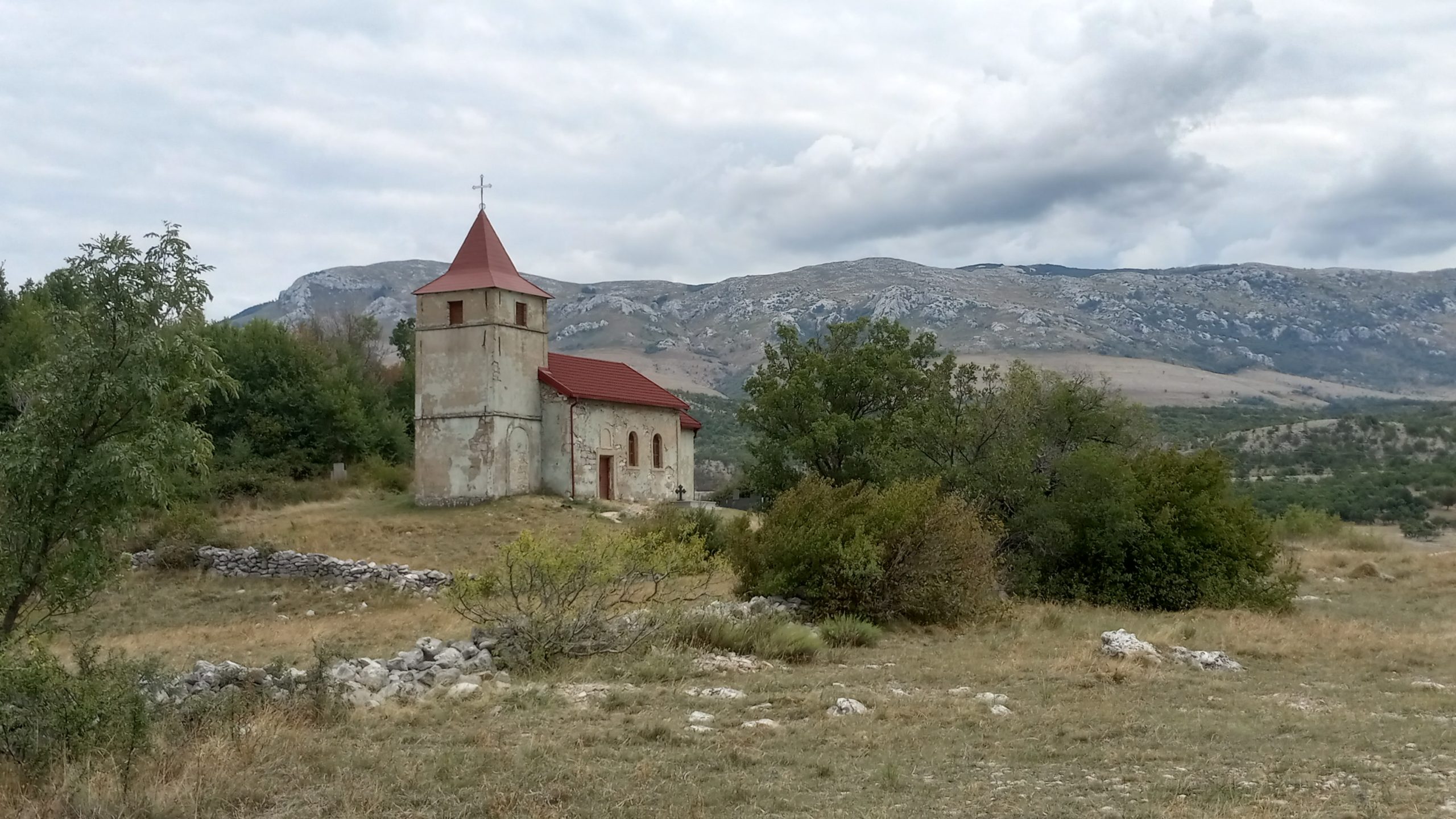 At the end of the track I found a quiet monestary placed perfectly in the rocky landscape.  Then I was on the highway again for a short stretch where I was stopped by a lovely Slovenian couple on vacation.  They asked me the usual questions and then offered a little trail magic… a chocolate icecream cone! 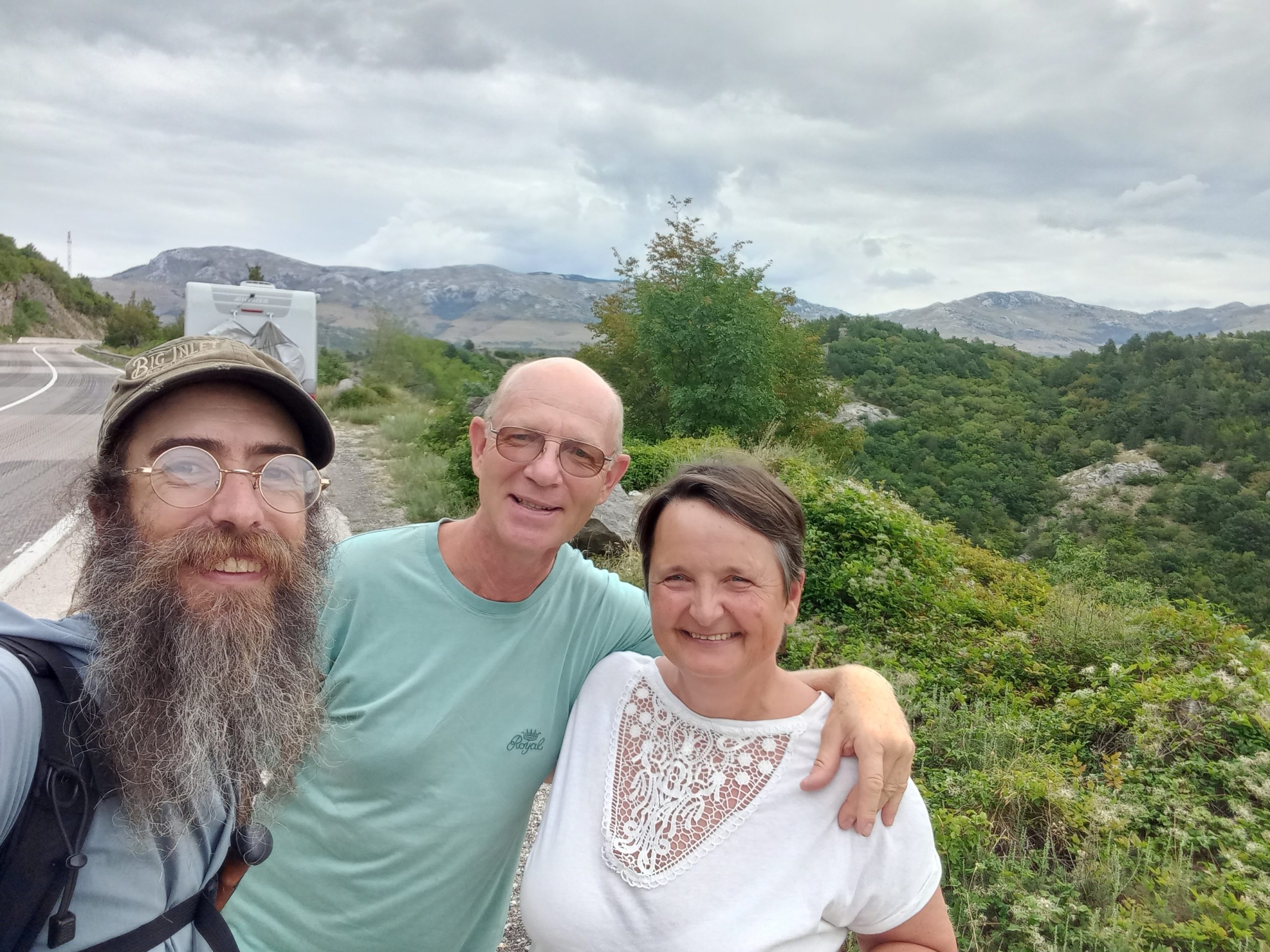 I parted ways and descended another rough dirt track to the Zrmanja River, which was flowing beautifully, clear and cold.  I paused beside it for lunch in the little hamlet of Zrmanja Vrelo.

As I continued along the road I found ripe figs, grapes, plums, and blackberries along the road side – along with the cold clear water, a thruhikers dream come true!

For the last part of the day I took an alternate staying low again to make sure I beat the darkness and the thunderhead chasing me down.  I made it into Knin just as the cloud broke and the deluge began.

Knin is an interesting town (look it up!) and just about the halfway point on the Via Dinarica, so it seemed like a good place for me to take a day.  Besides, I’ve said it before and I’ll say it again, I do not like hiking in the rain.  I had a beautiful, clean, and cheap pension apartment beneath the fortress and I enjoyed a restful day.

The highest peak in Croatia!

Though there was still some mist on the nearby peaks the weather looked much better so I packed up and walked out of town.  After a couple miles of pavement I turned onto trail where I met a large herd of sheep I thought I’d be following along the climb.  Luckily they turned off after a quarter mile and I had the trail to myself again.

The route followed a combination of trail and dirt track, and I climbed about 1,500ft to a plateau where I found some military doing training exercises (thankfully no ordinance, just rock climbing and some other drills). 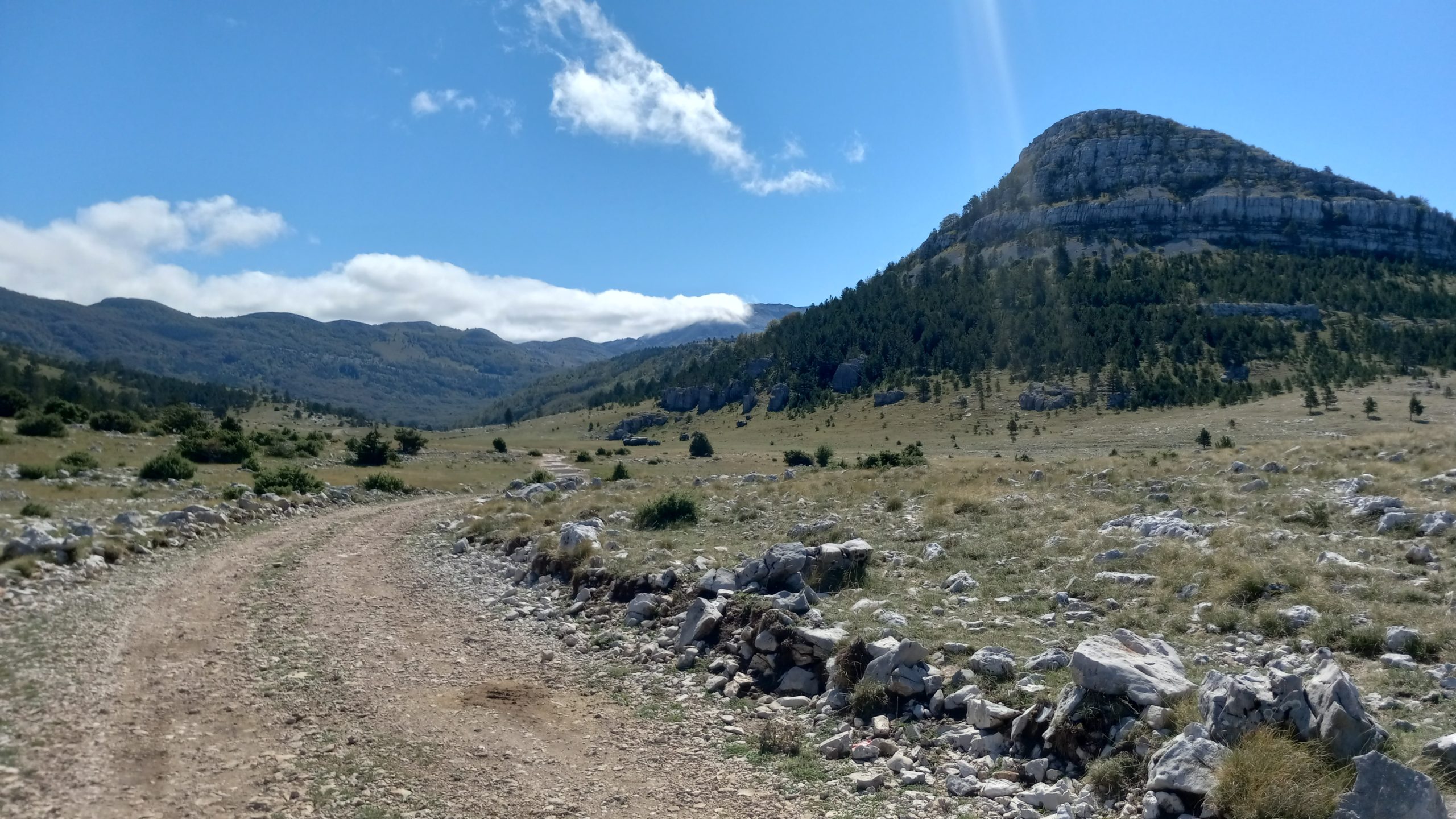 I got to the Brezovac shelter earlier than expected and found it locked tight, including the well.  So I continued on for a steep 2,500ft climb to the summit of Dinara.  Near the top I found the Zlatko Prgin shelter, which was not locked and had a full well, so I had lunch there in the shade out of the wind.

Lunch being finished I made the final ascent to the peak, which at just over 6,000ft is the tallest mountain in Croatia.  I found two Polish guys up there, and talked for a while with the one I had met at the tourist info center in Knin a couple days before. 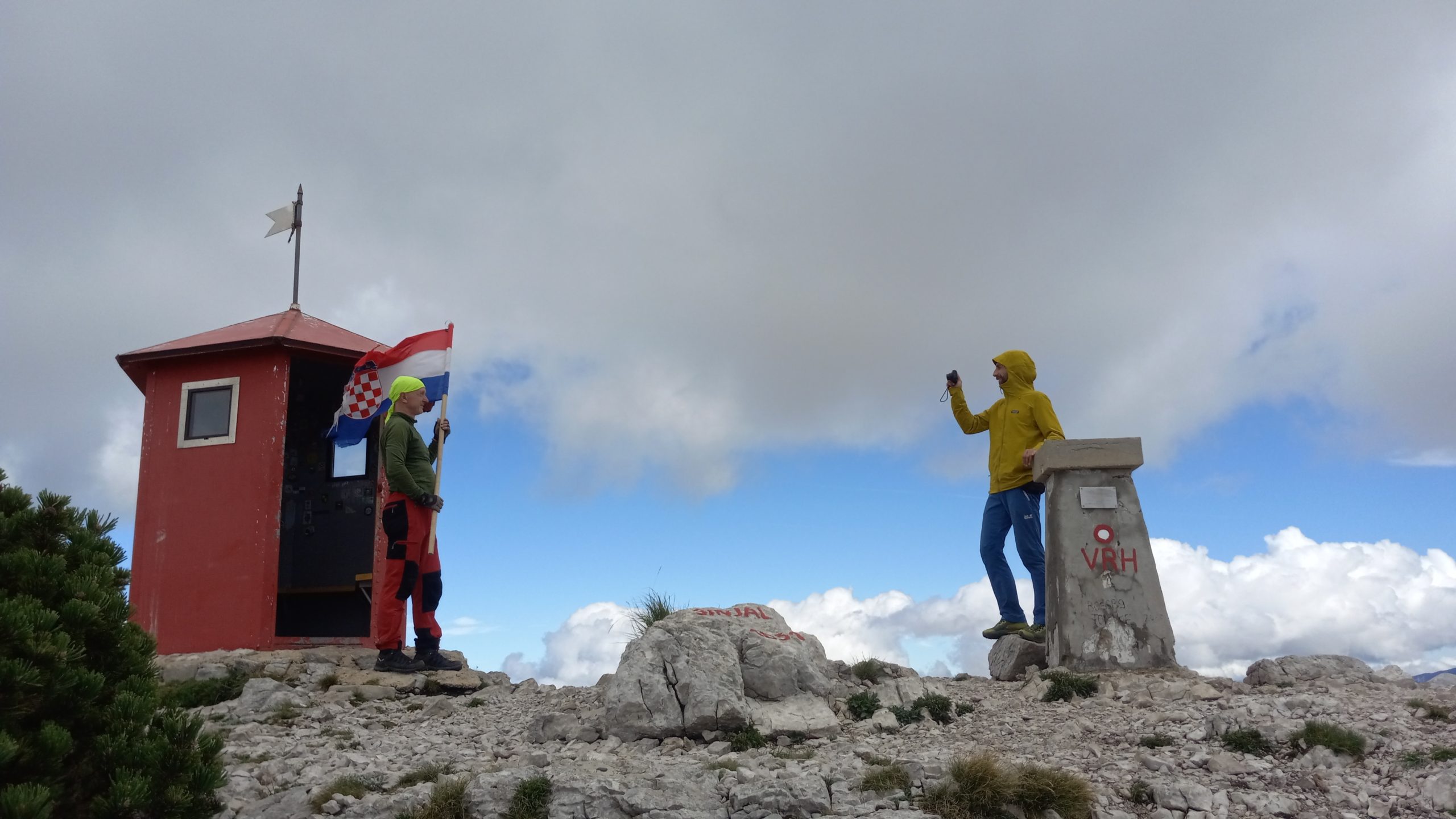 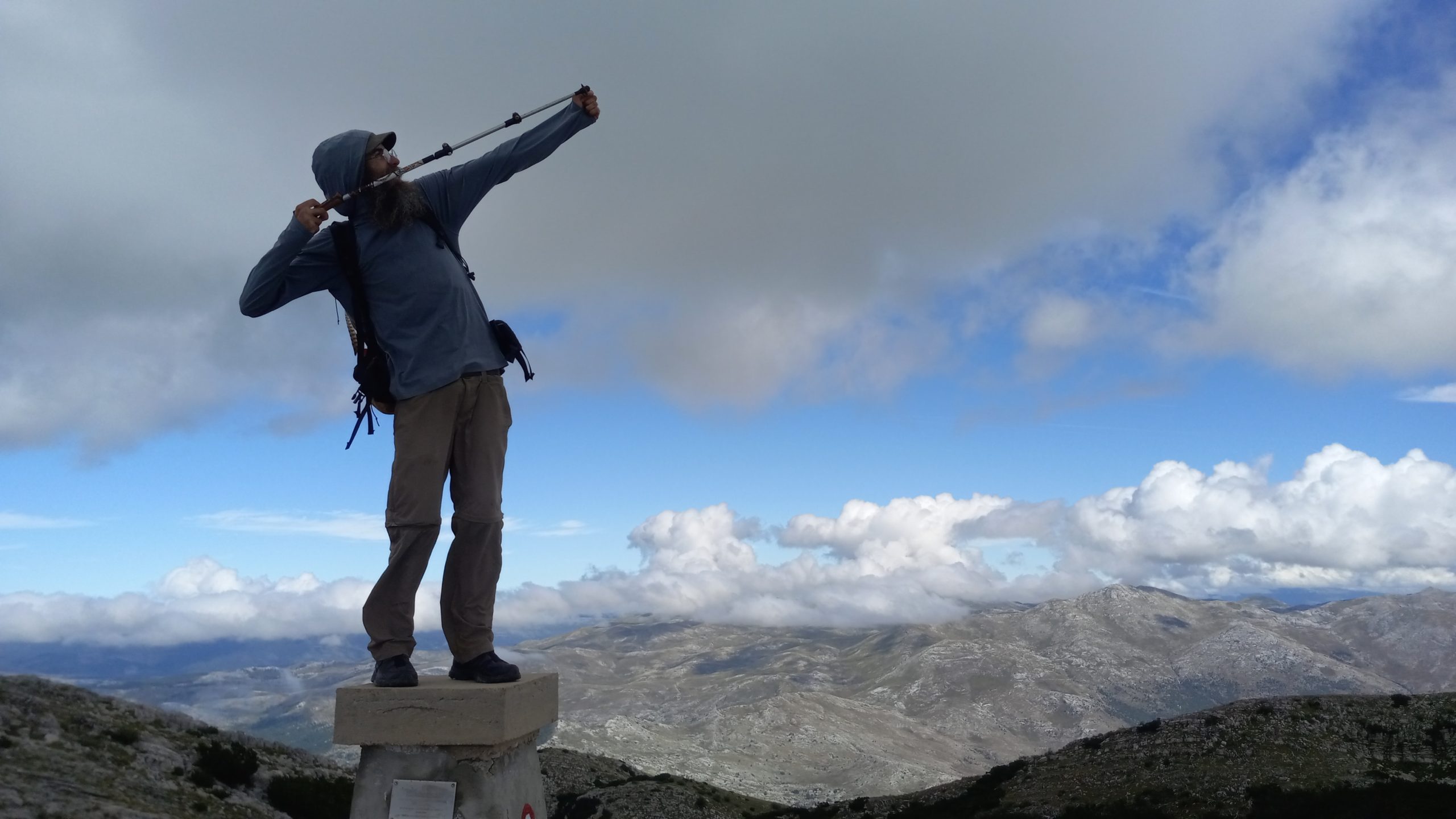 A cave, and a castle!

I knew I had to get down to water so I left and pretty much jogged down the nearly 5,000ft descent.  Along the way I passed a the rest of the Polish group (they said they had about 40 people).

On the descent I also found and explored a very cool little cave shelter and passed a 15th century castle ruin. 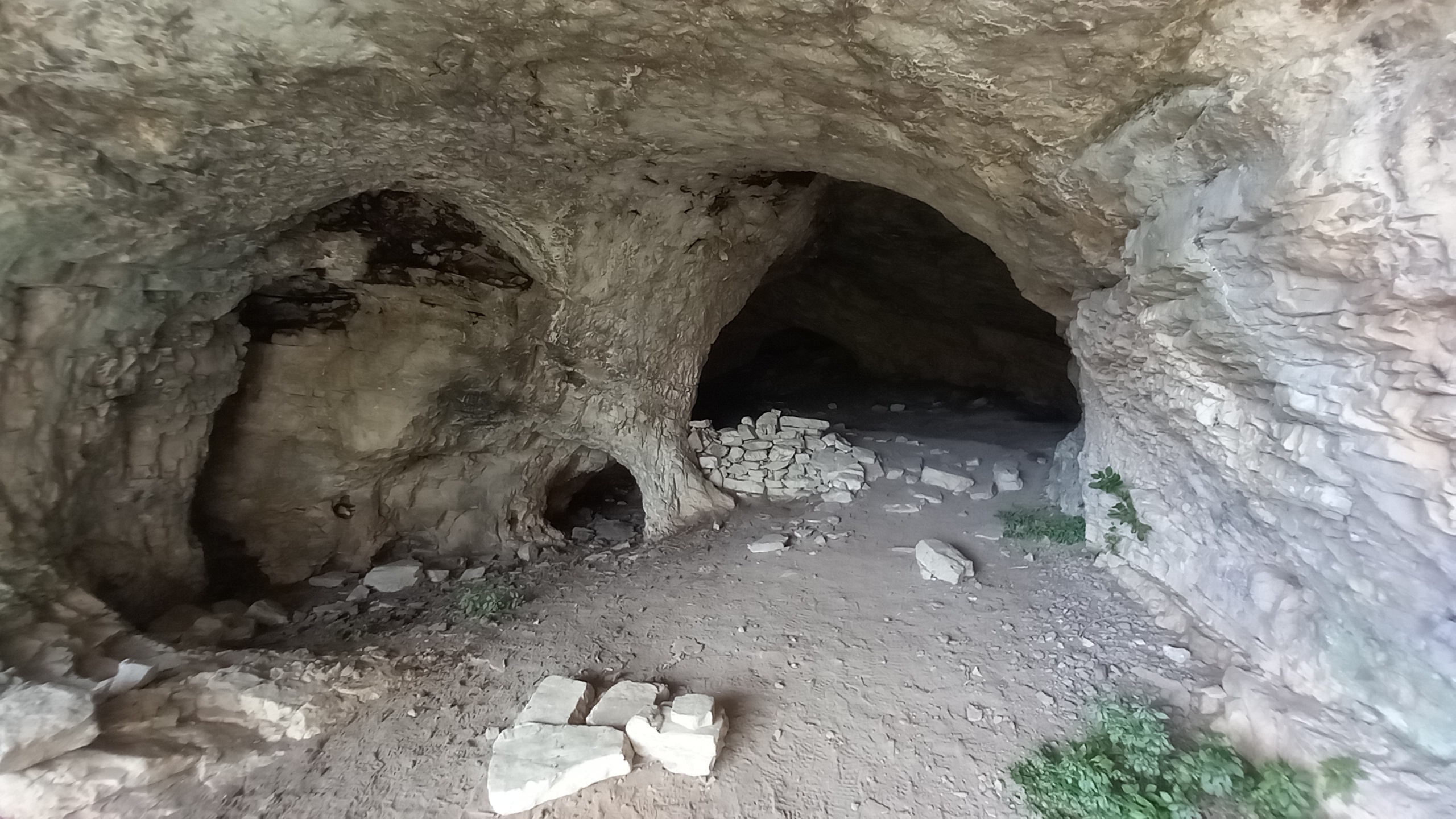 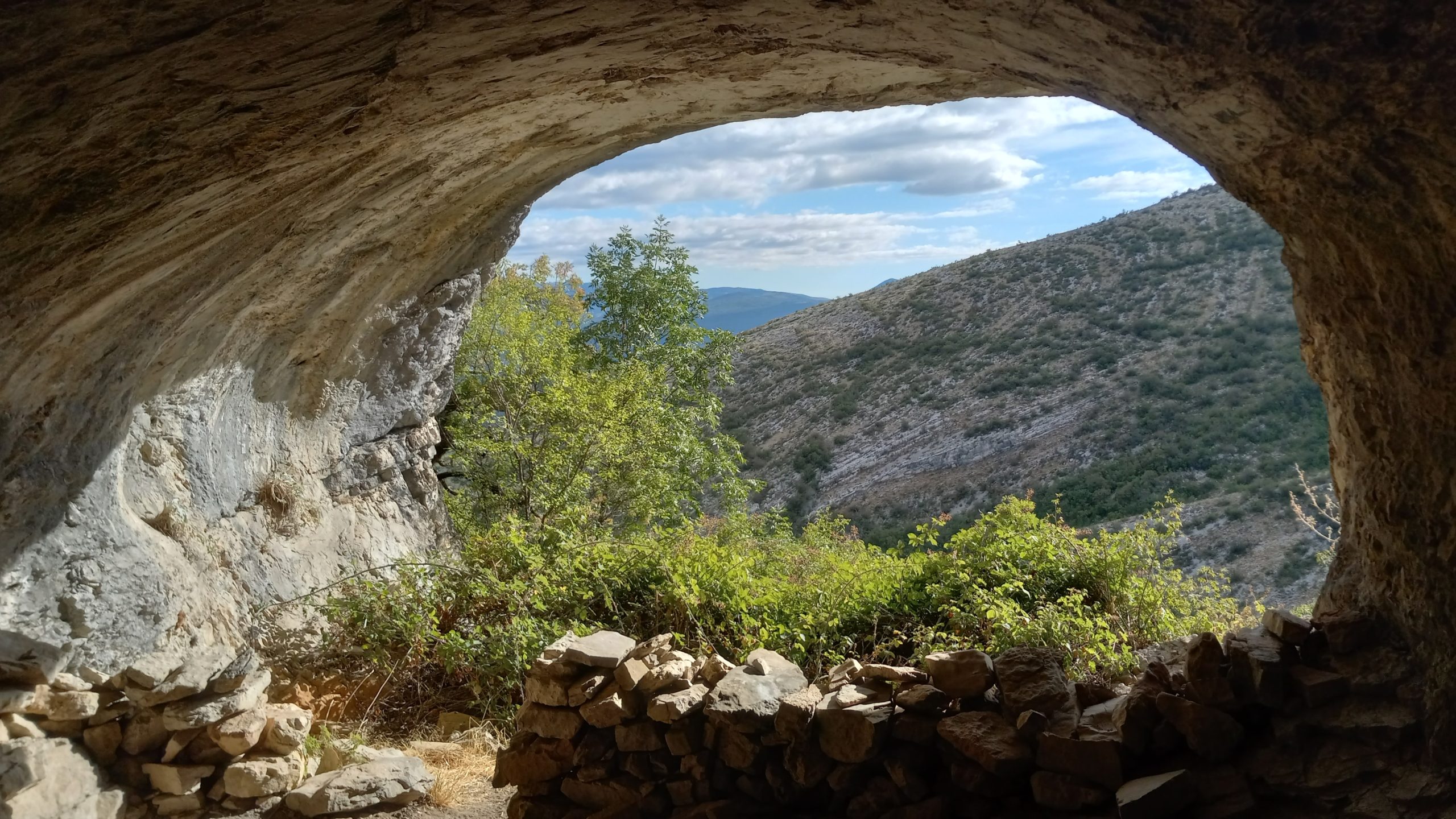 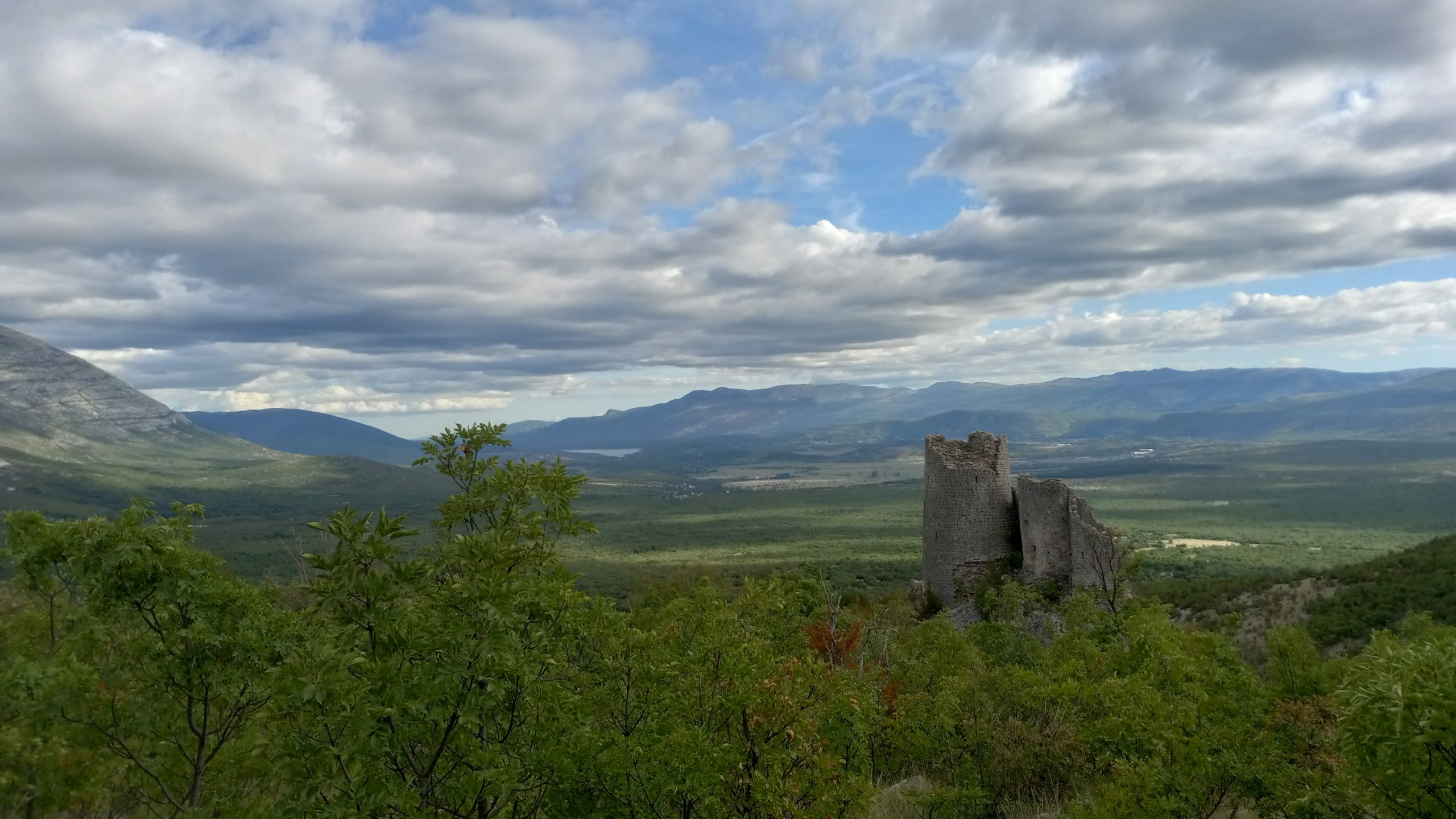 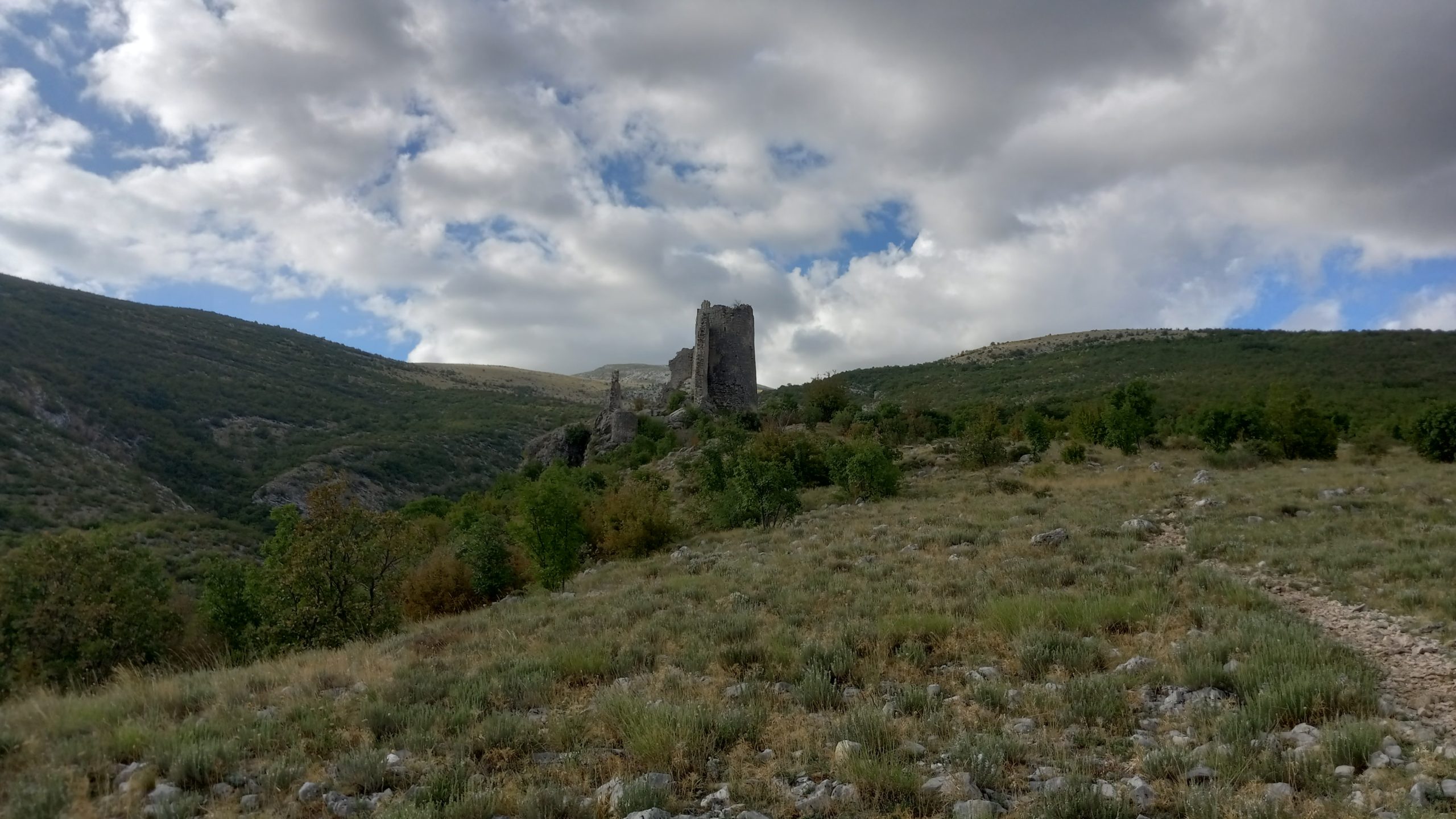 I arrived at the Cetina spring just before sunset and enjoyed a beer and conversation at the little kiosk beside the church. 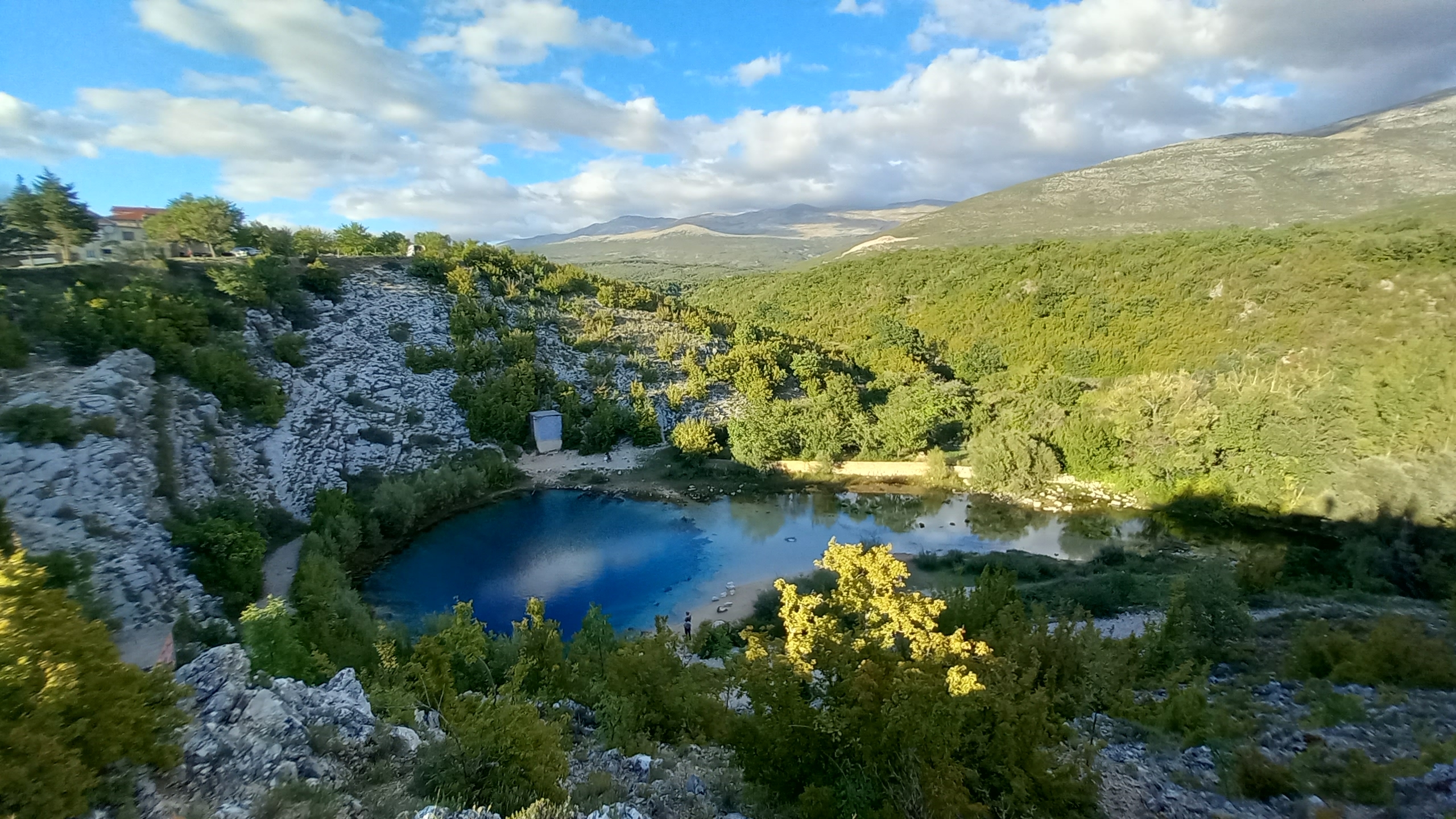 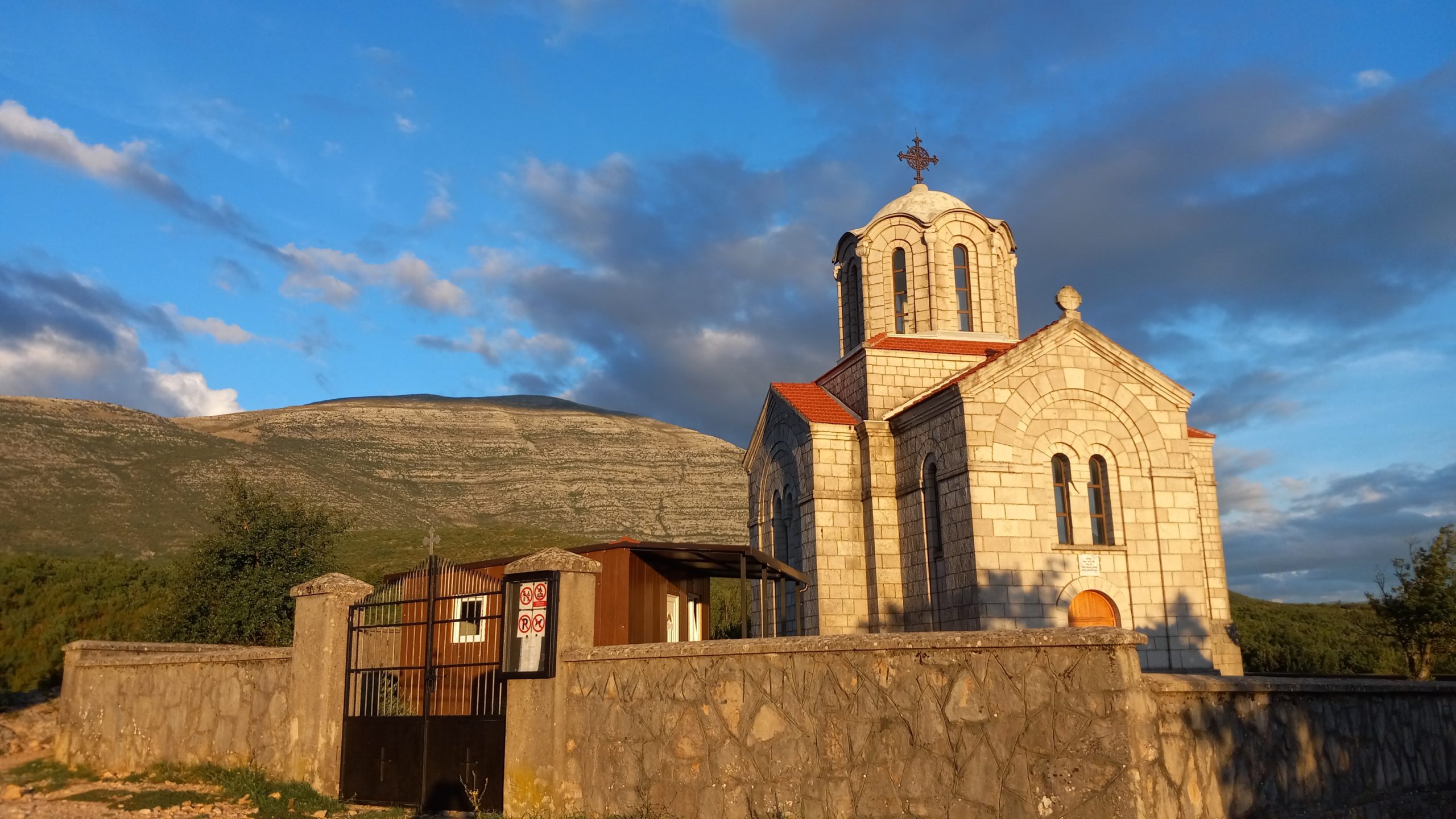 The woman there told me that people camp down the road a little, by the river.

I headed down to the camp and found just one van.  I introduced myself to the French owner and we shared some cheese, sausage, and a beer before retiring for the day.

I woke up early because I knew it was going to be a long, hot day.  I filled my water bottles and started out.  On the outskirts of the little village I passed one of the oldest churches in the country. 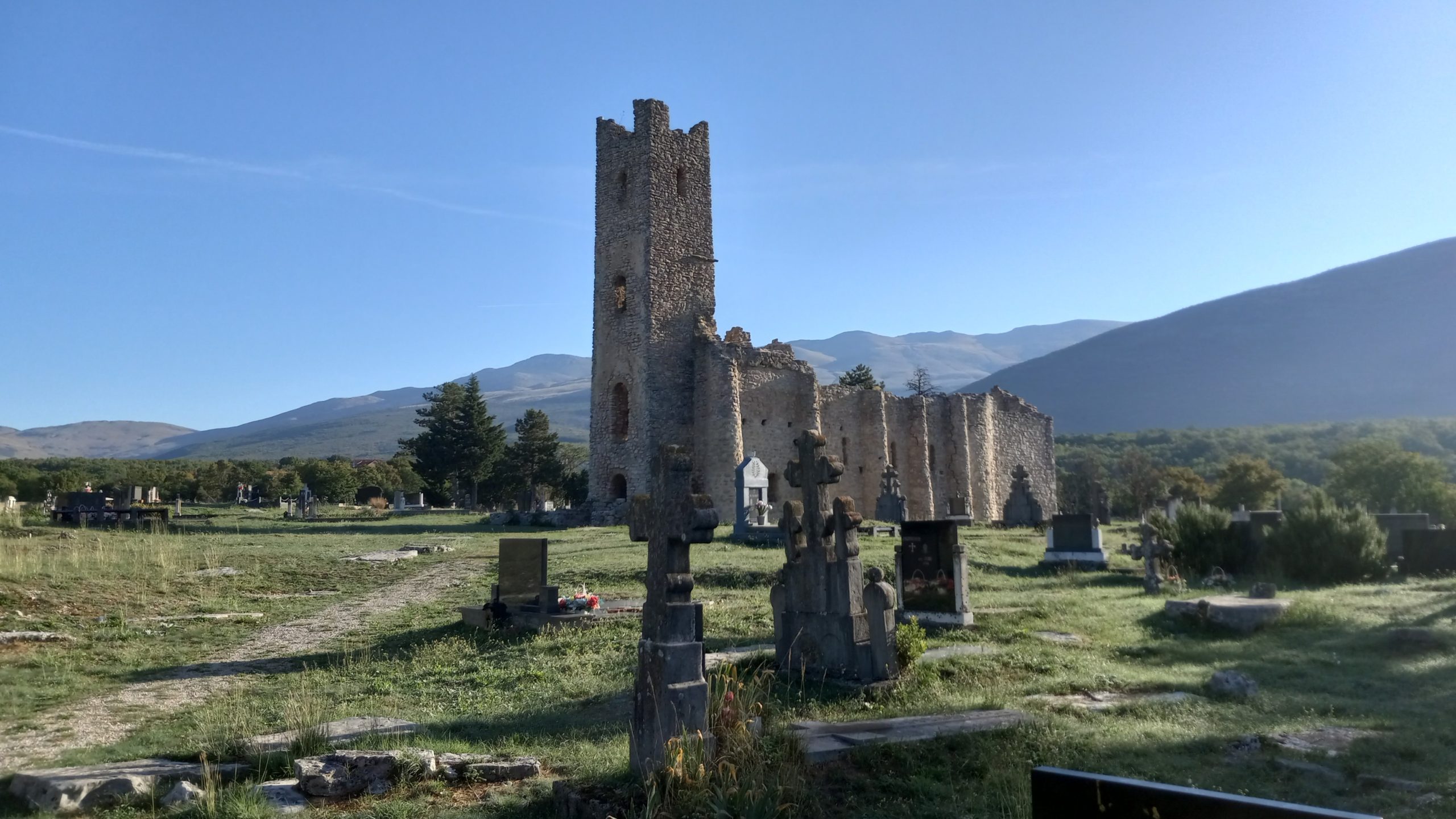 Then I walked the long, lonely road as the sun blazed higher and the temperature rose.  I was tempted to head into the high country of Dinara Nature Park, but the trails crisscross in and out of Bosnia up there and I didn’t want trouble with rangers or border patrol.  Also, I have to worry about landmines now.

Eventually the road did lead me to the shore of the reservoir (the largest in the country), so I was able to take a swim and cool down a bit. 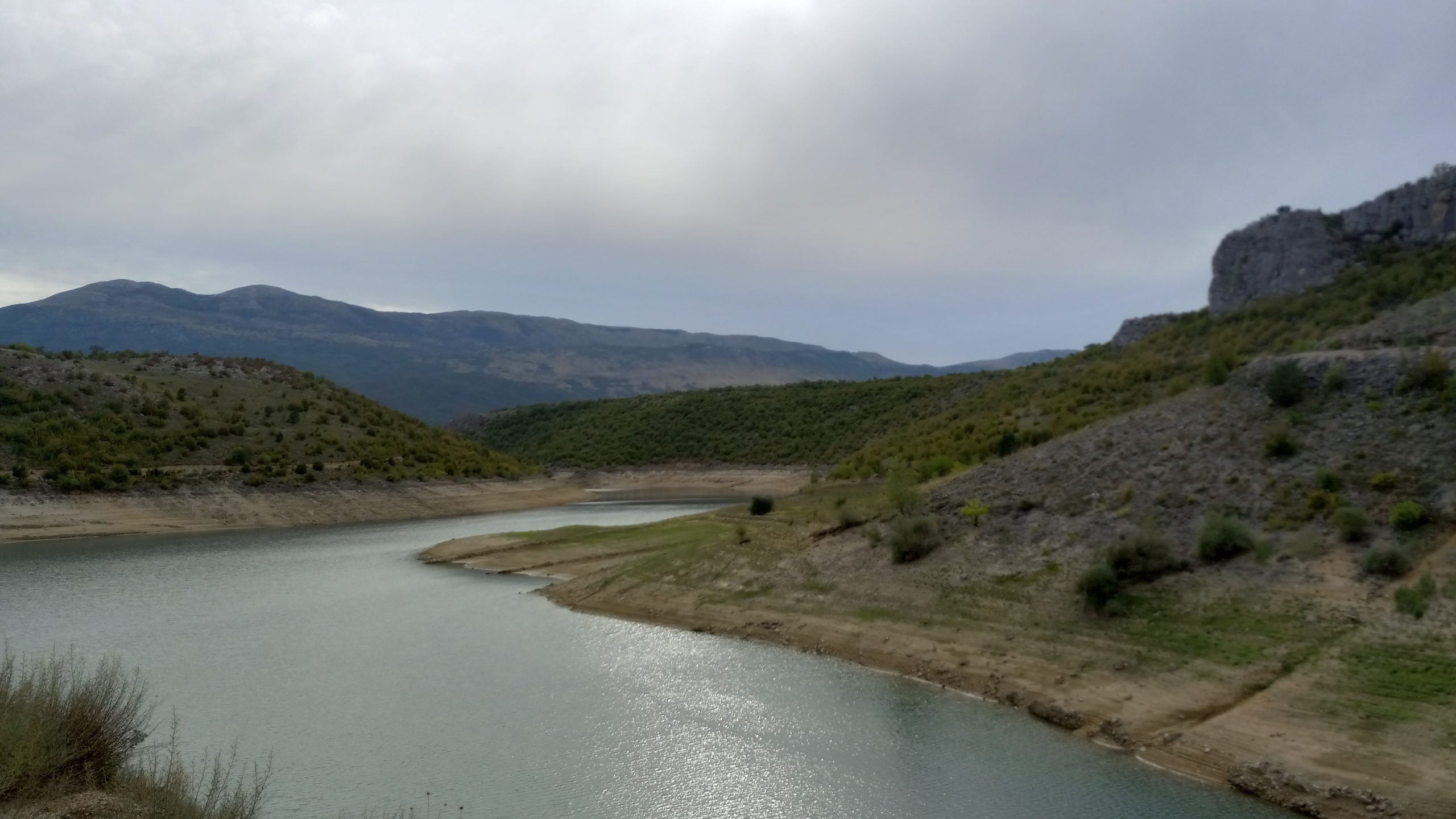 I walked until dark due to numerous shade stops.  In the fading light I followed a farm track beside the river until I found a comfortable, hidden flat spot not far from the shore.

A side trip to clean up before the border crossing. 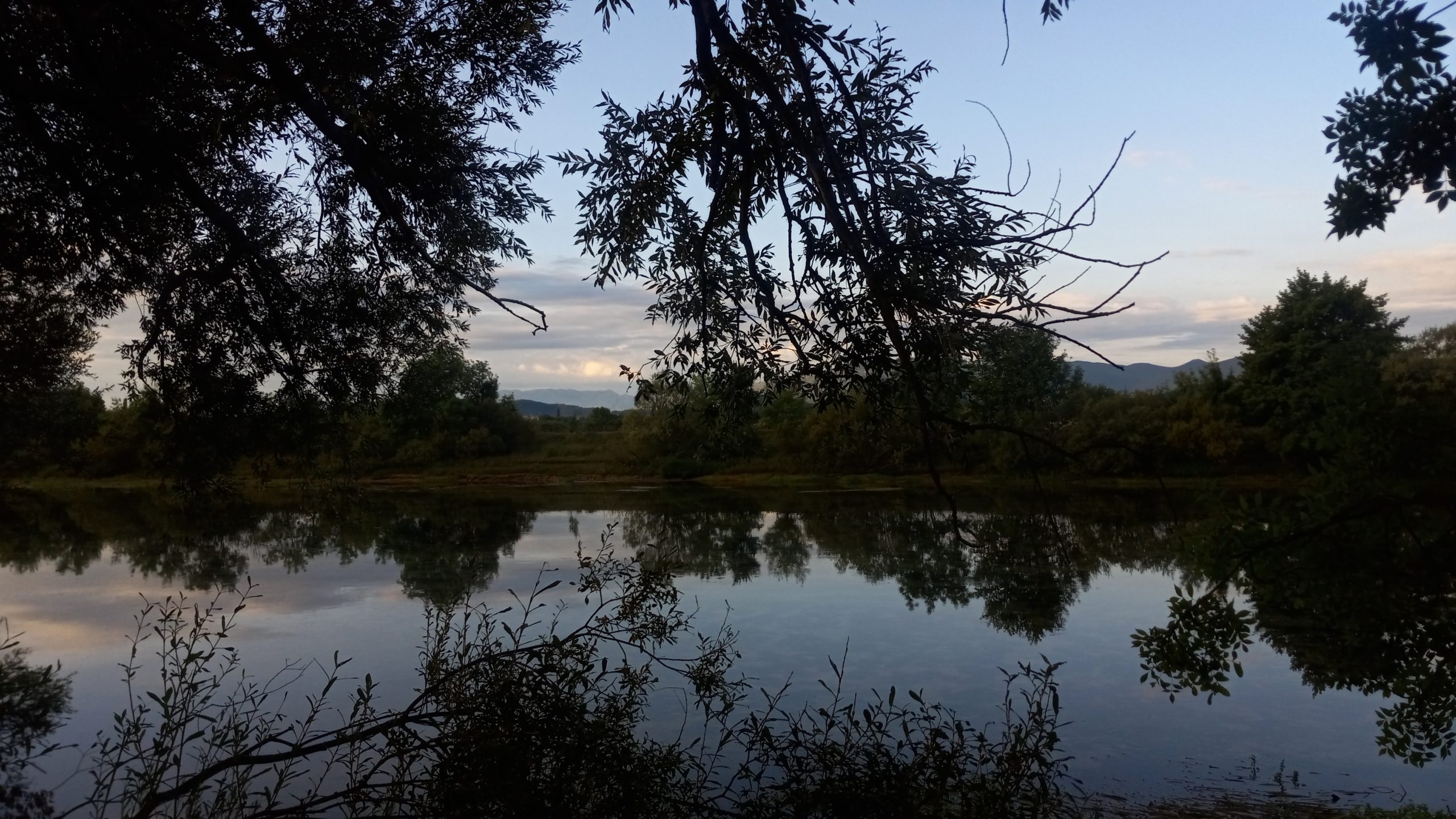 I tried to wake up as early as possible to avoid being found, but several cars pulled up before first light… hunters on the dawn prowl.  They didn’t bother with confronting me, but after I heard the first rifle shots I knew it was time to move back to the main road.

I got a little breakfast at the store in the hamlet Obrovok Sinjski.  While I was eating I saw a guy walking a fully packed horse, followed by another guy with a huge backpack, whom I would meet later.

I followed the official route until Otok, then I branched off to follow the Cetina river for my after lunch stroll. 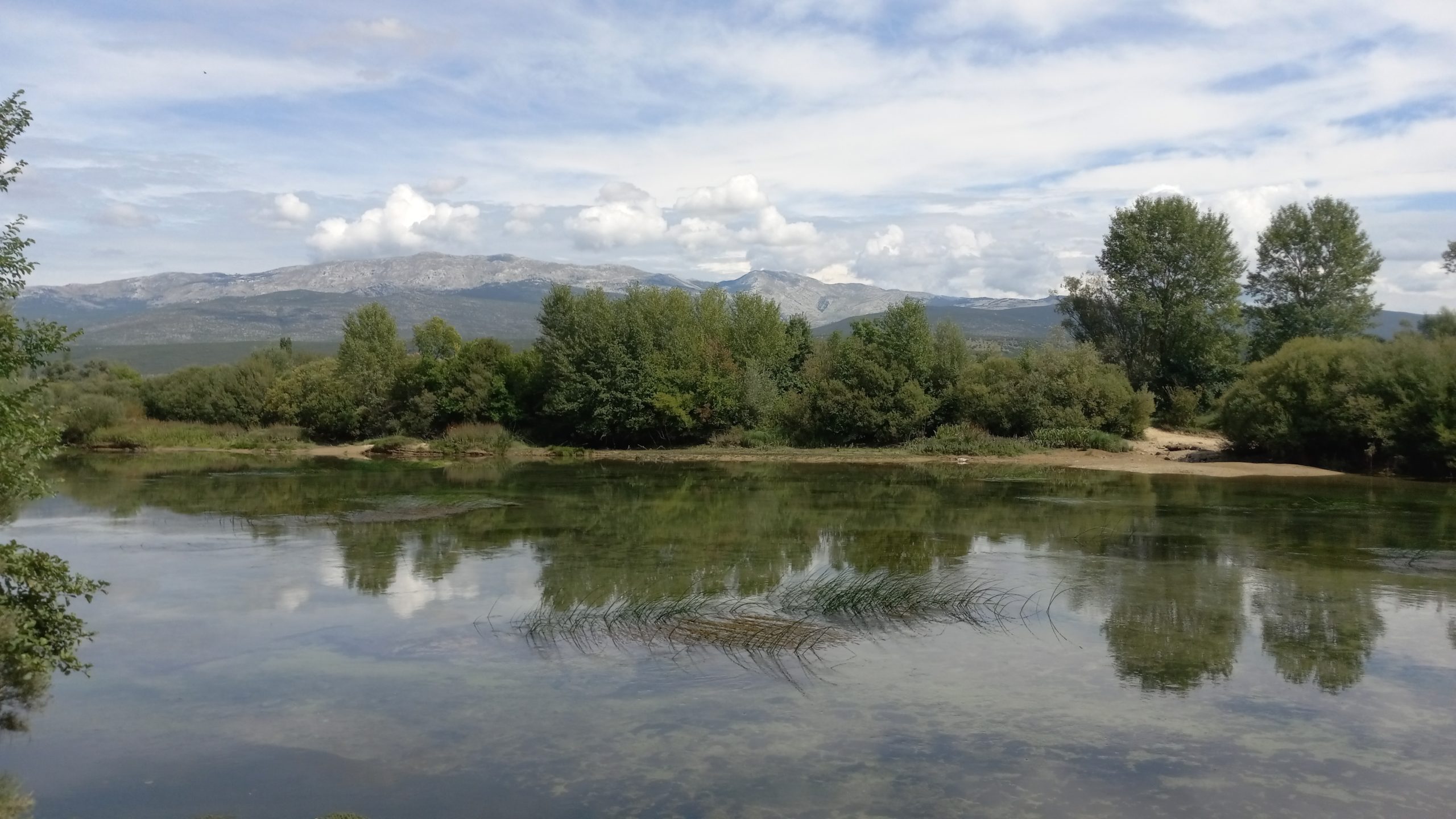 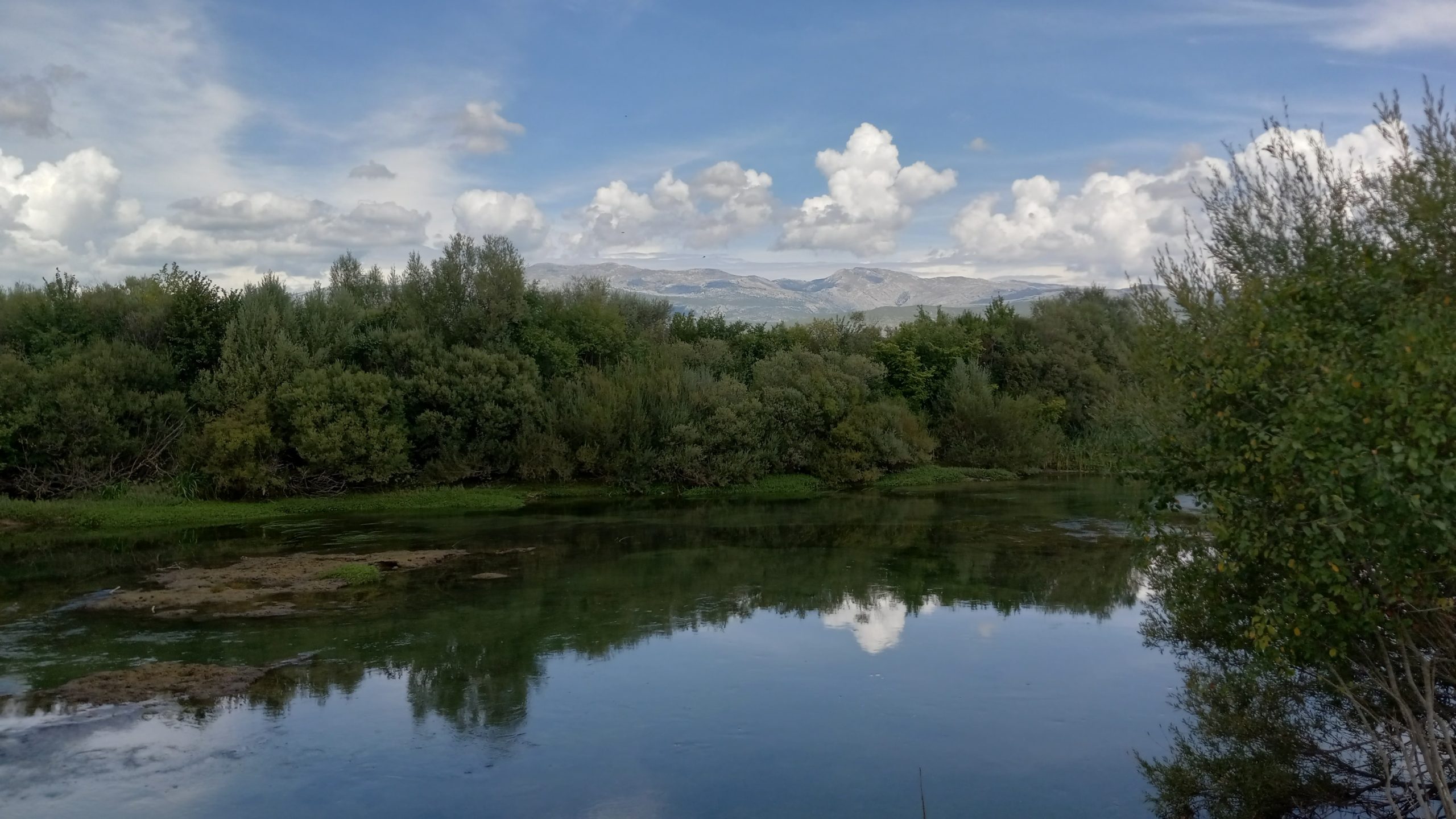 At a small ranch I found the aforementioned journeyers and found out they were walking from Italy to Greece to start a community there.  While we were talking the police pulled up and asked to see only my documents.  A red car pulled up with them, he had passed me a little before.  I have a long beard and am guessing he thought I was a Syrian refugee.

My credentials checked out, so I continued into Trilj where I got myself a hotel room.  The hotel unfortunately didn’t have laundry services so I did my laundry in the bathroom sink like a thruhiker is trained to do.

Shortly after I got my room a thunderhead let loose and it rained hard for an hour.  But then it passed and I was treated to a spectacular sunset over the Cetina river, my favorite body of water on this hike so far. 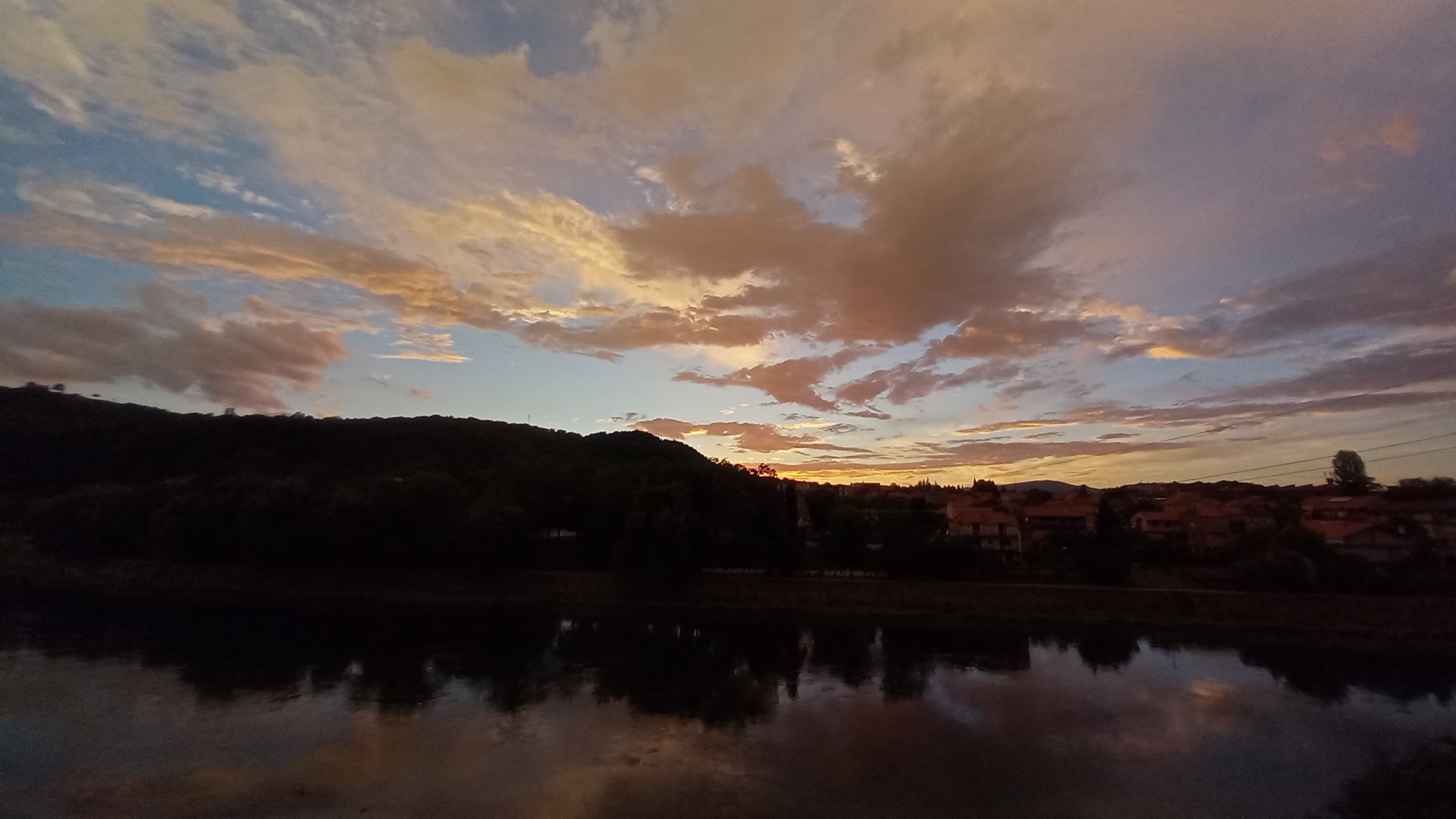 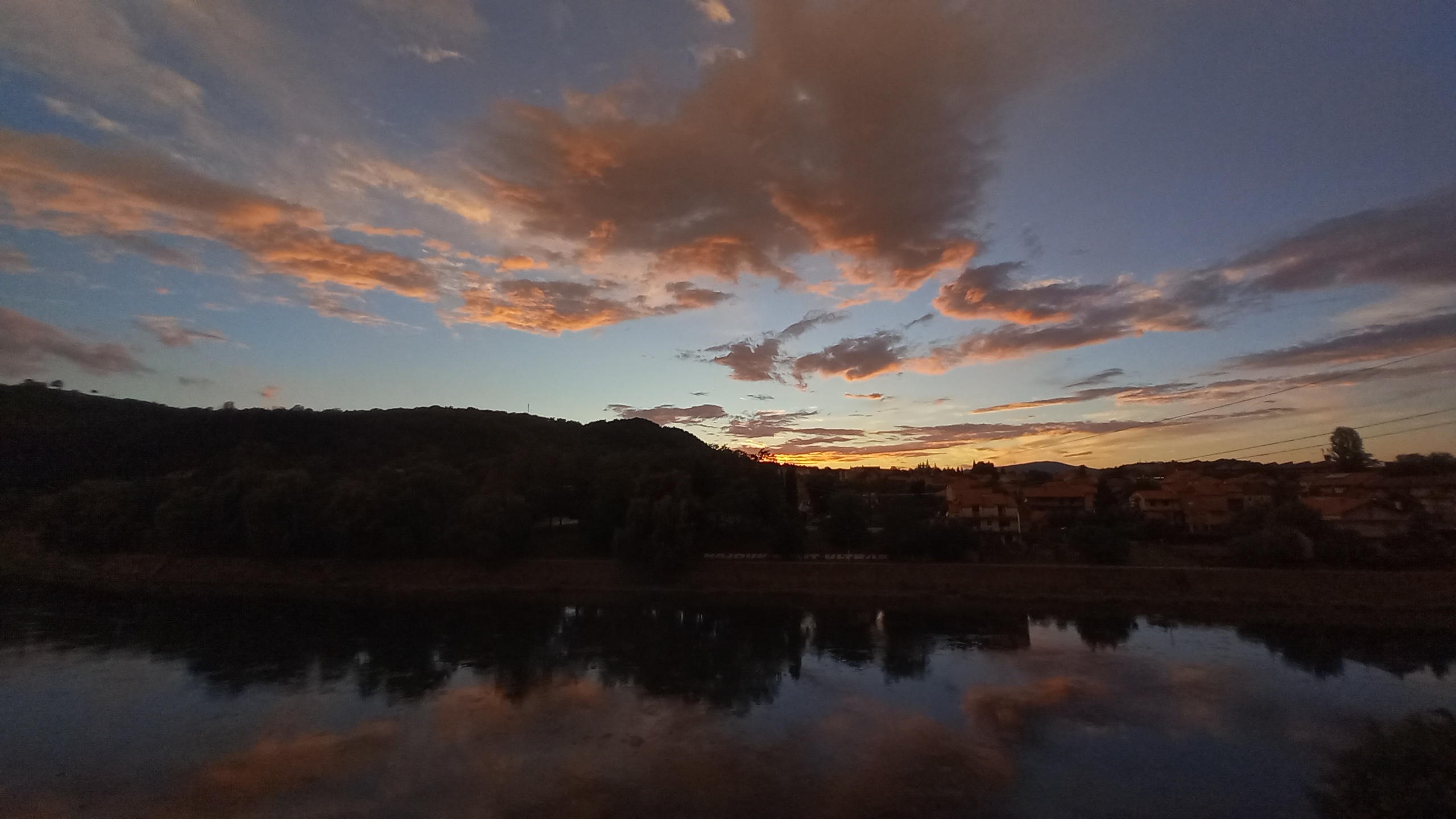 Working watermills and ultimately a campsite beside a wind turbine.

I had a late start out of Trilj due to an amazing view from the hotel room, a comfy bed, a big breakfast, and conversation with the other walkers I had met the day before.

By 10 I was on the road, a busy paved highway that I followed for a couple miles.  In Grab, where another confluence occurs, I met back up with the official trail. 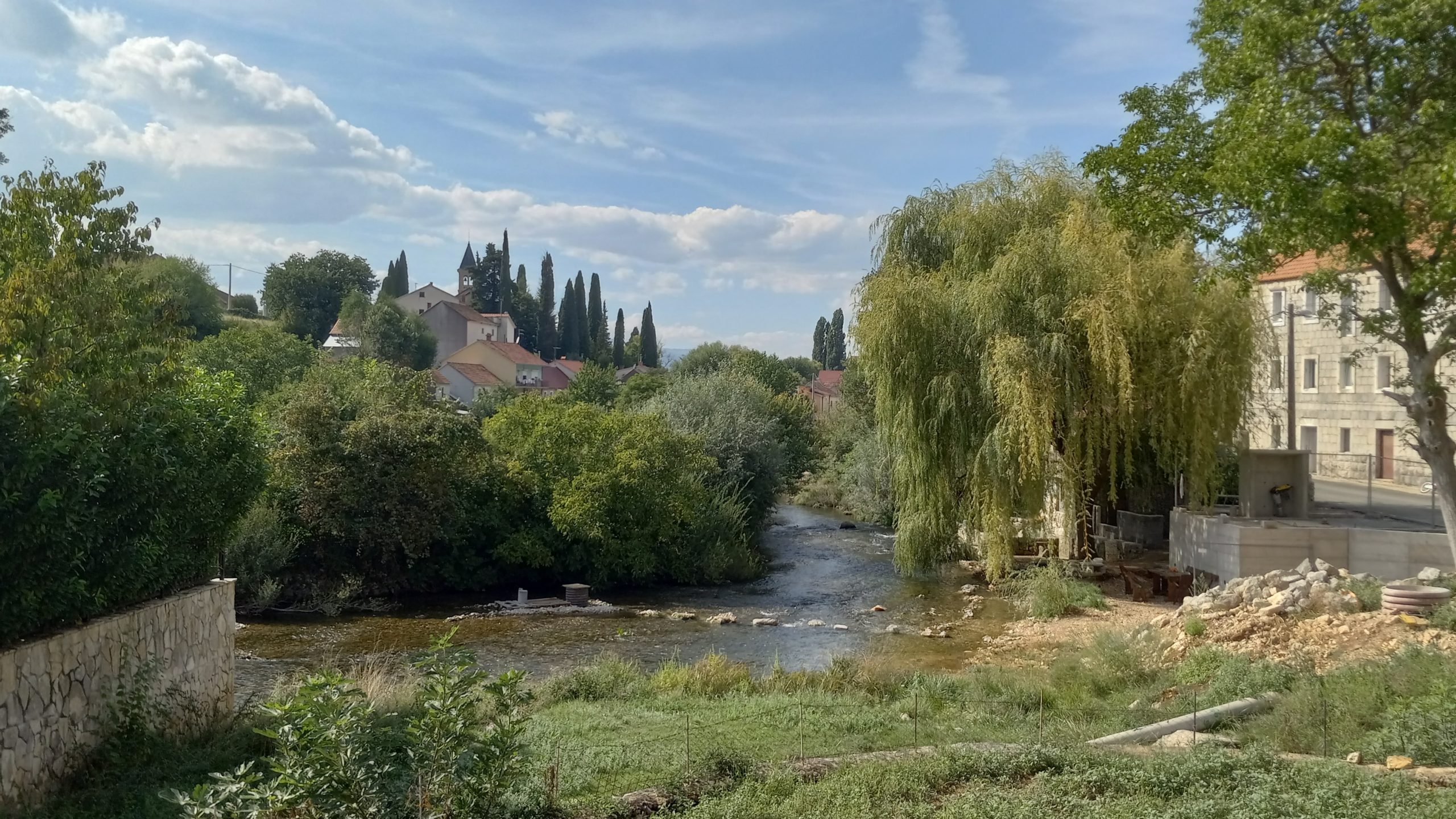 I did some side questing up the Grab stream to check out the 3 working watermills, finding that there are 5 mills all together, all of them centuries old. 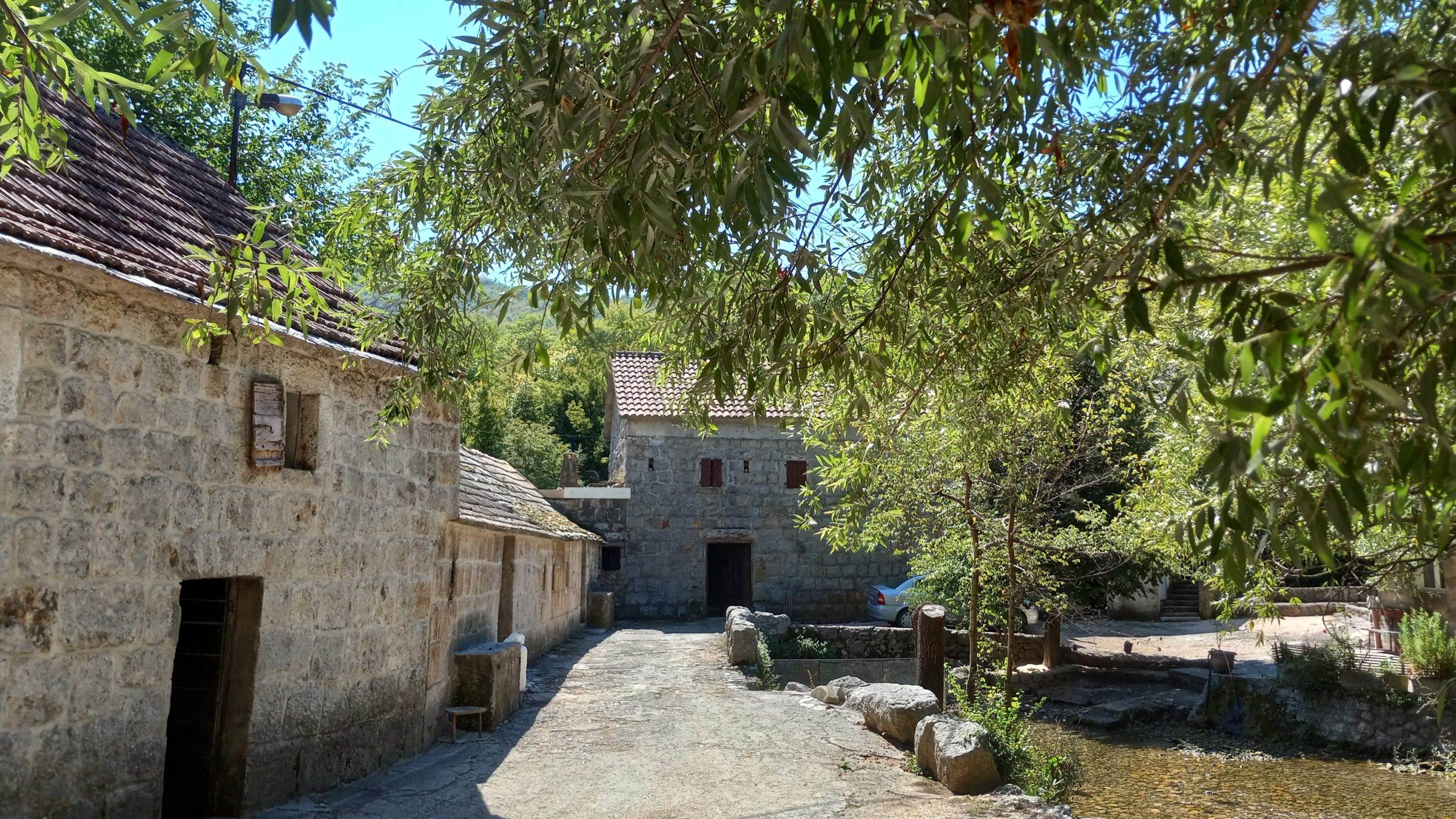 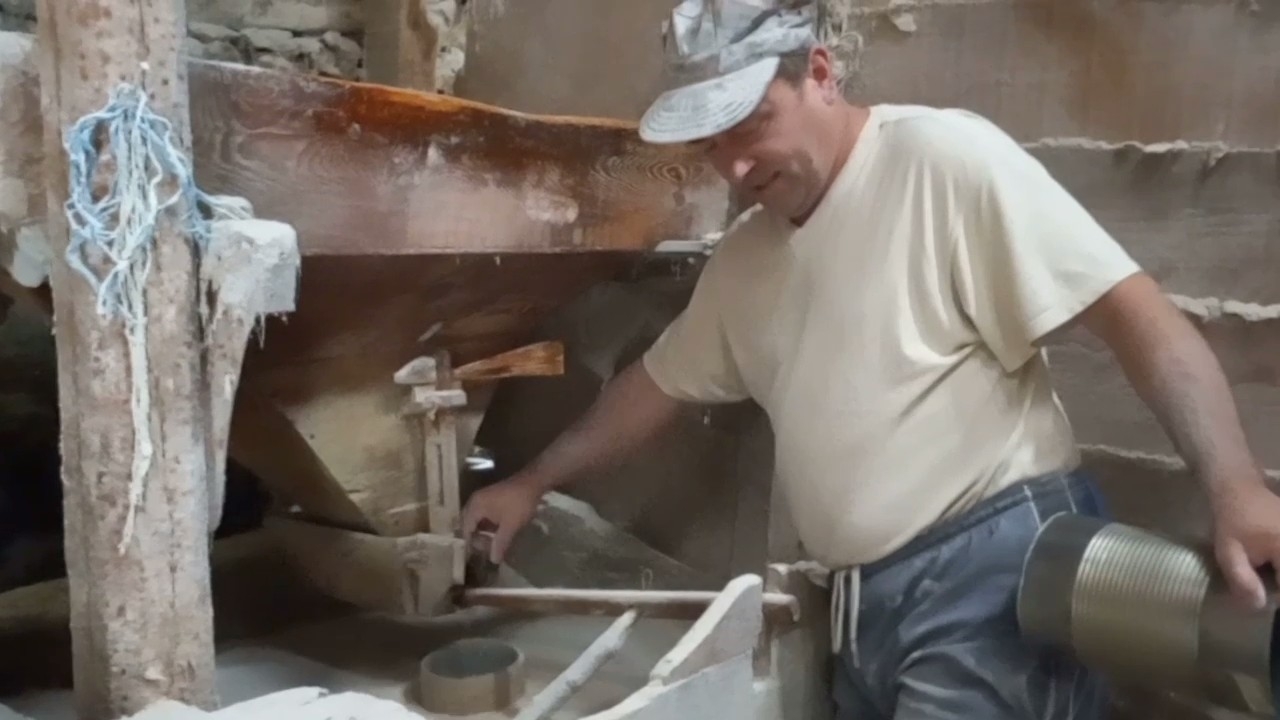 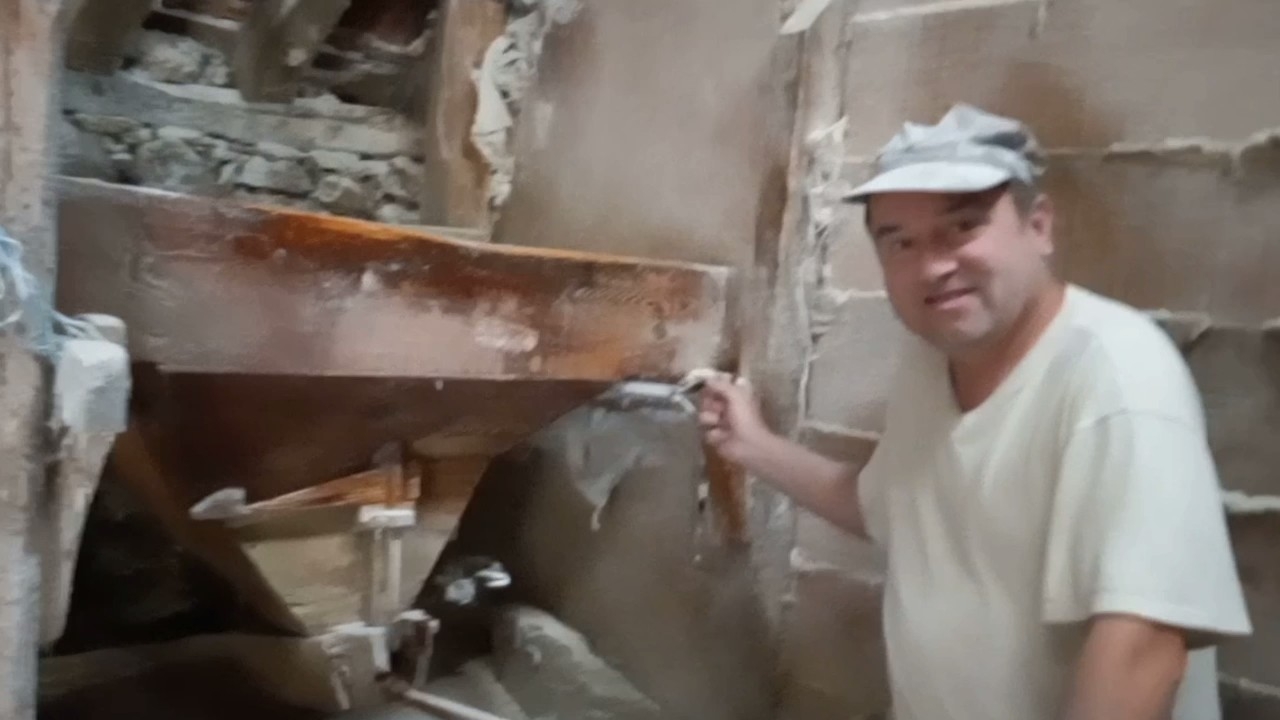 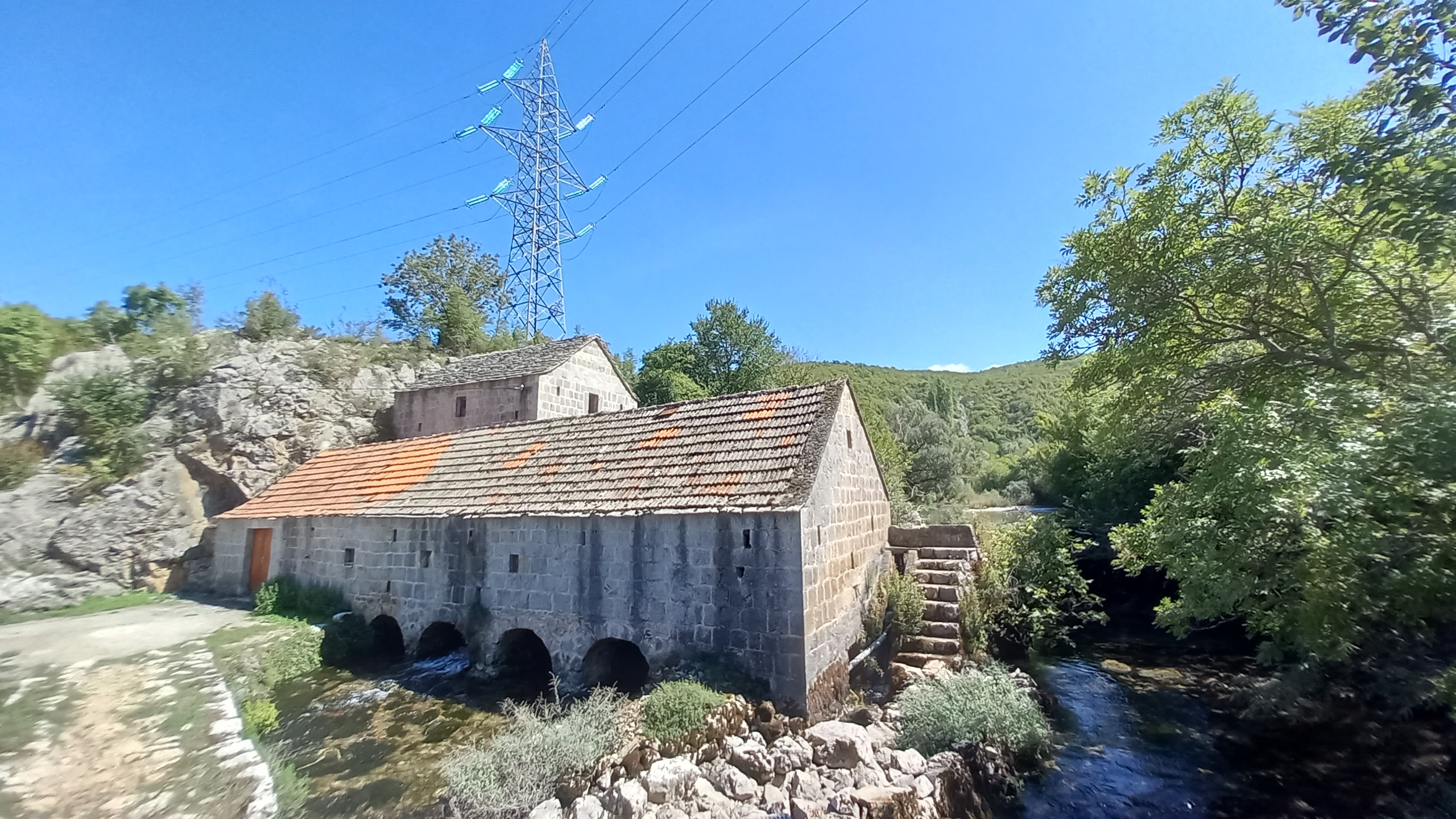 I also walked up to the source to fill water bottles.  It was cool in the shade with good, fresh spring water literally gushing out of the hillside!  I ended up staying there for several hours.

I had to make miles though, so I gathered myself and walked back down to the route.  The next 10 miles I hiked were exposed, uphill, and wearisome.  I hiked along a road that changed from concrete to gravel and back again and again.  During the entire distance and several hours I was only passed by two cars, and one motorcycle with a father and son looking for their cows. 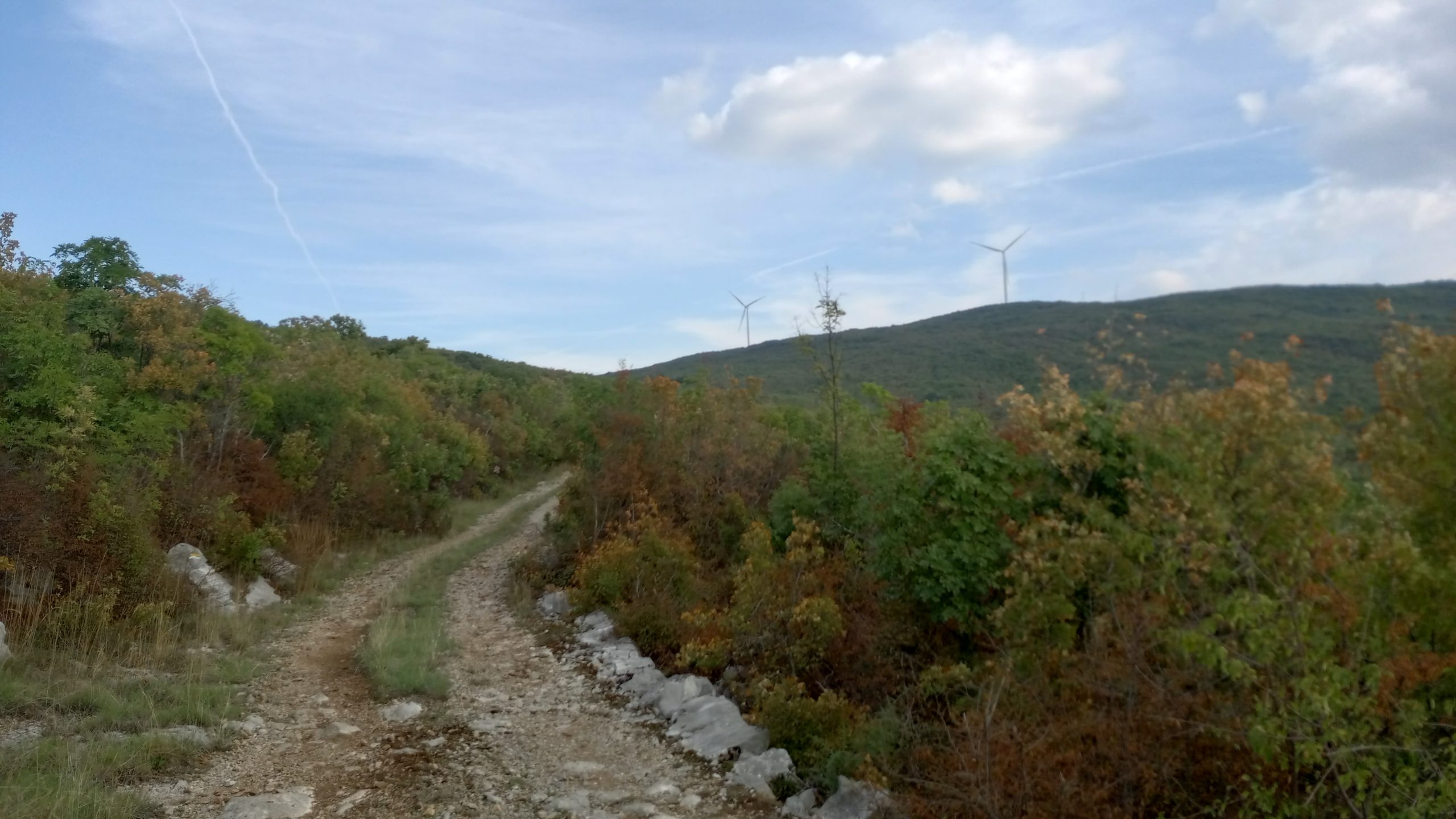 As I gained altitude I couldn’t help noticing the changing colors, a sure sign of the onset of autumn.  I topped out on a hill with a massive wind turbine spinning just in time to watch the sunset.  I noticed a sign saying cameras were present, and I was only a mile or two from the border, so I wandered a little ways away and into the shrubbery to find a place to pitch my tent.

Crossing into Bosnia and 13 bonus miles.

I got going early, but not too early because I didn’t want a repeat of the last border crossing.  I have a guide book for Bosnia/Herzegovina and both it and the GPX tack said follow a dirt track parallel to the main road into Bosnia.  So I went by that route but found no border chechpoint.  I then retraced my footsteps (little did I know this would be a theme for the day) to the main road so I could get my passport stamped. 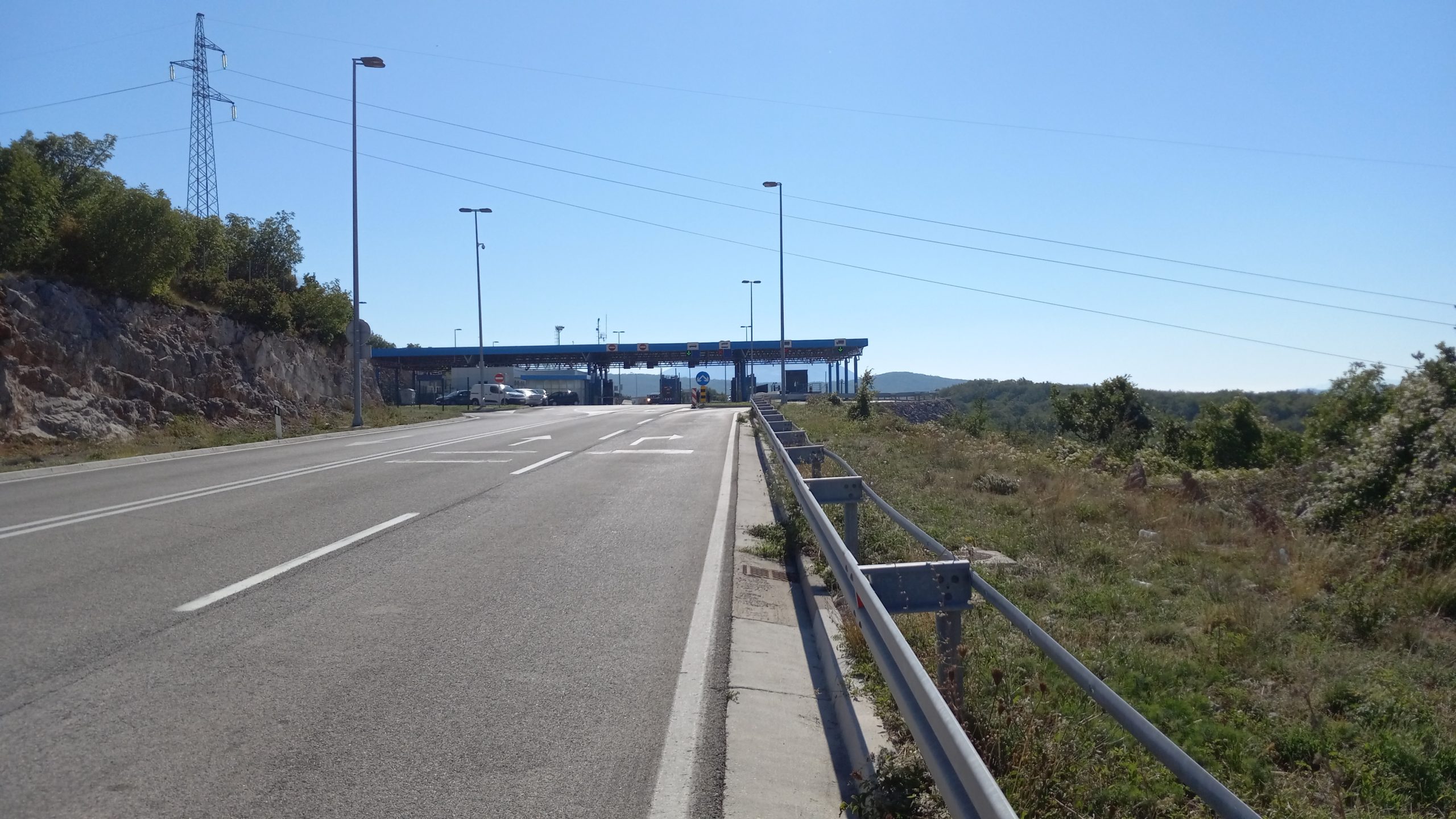 Crossing through both the Croatian and Bosnian checkpoints I had no hassle whatsoever.  I was barely asked any questions, got my exit/entry stamps, and proceeded on my way.

The route led to the picturesque Buško Jezero which I followed for most of the late morning and early afternoon. 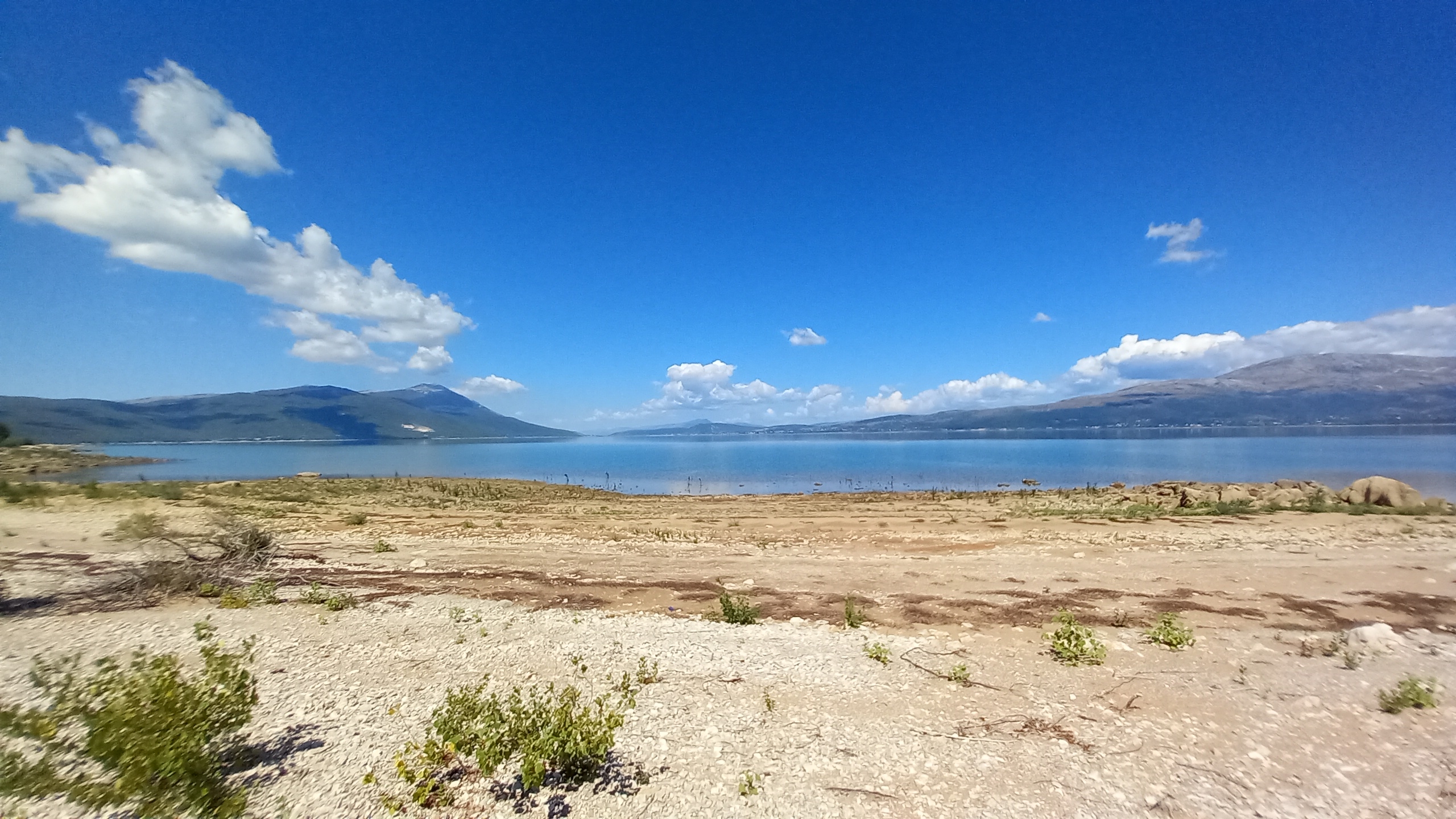 About midway along my shore walk I stopped at a café for a glass of wine.  I think I left my glasses there but I wouldn’t realize it until much much later.

A few miles down the road I crossed an old Bridge and passed briefly through the small town of Prisoje. 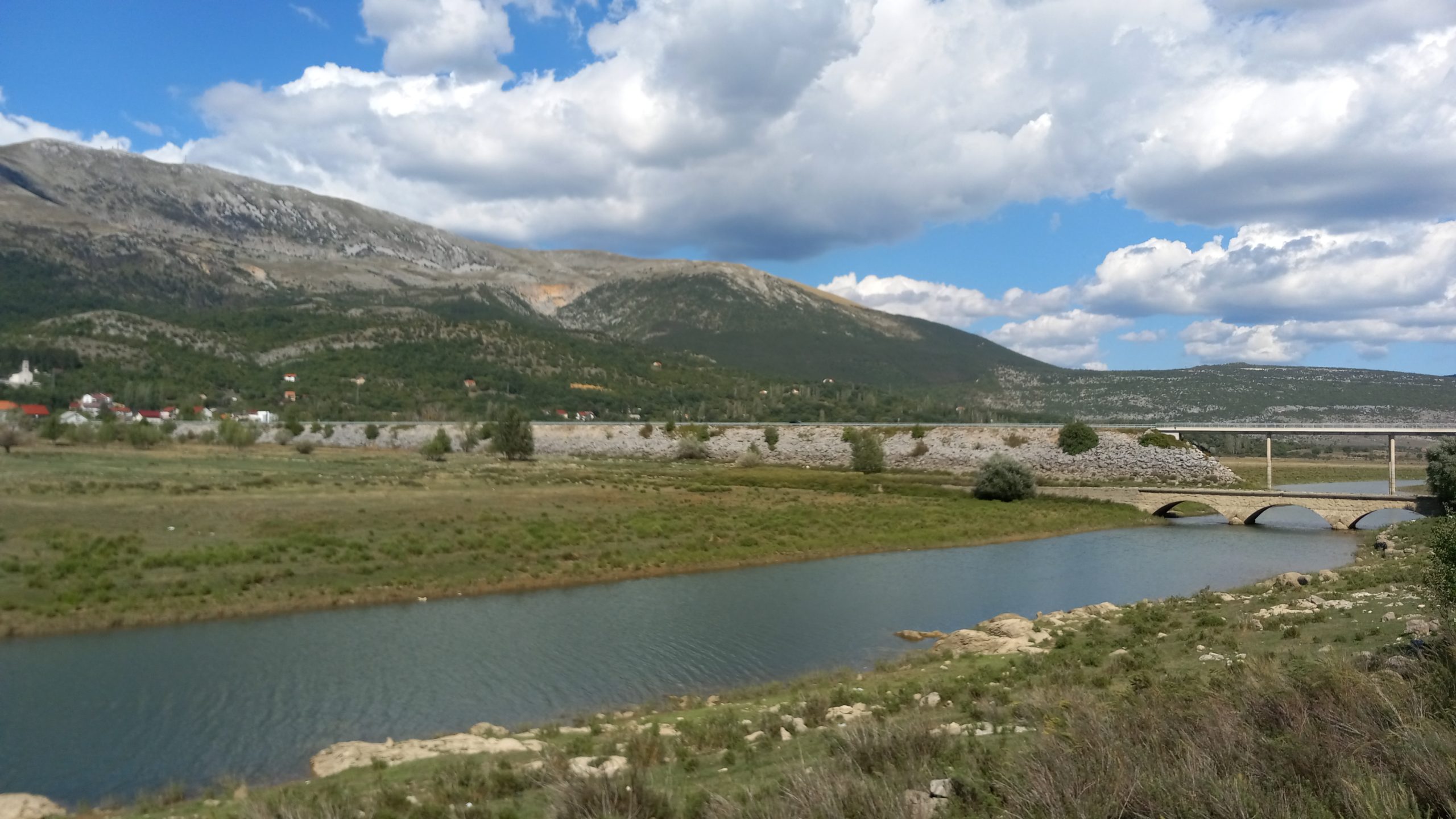 About a mile outside of town the road led me to a short section of actual trail up the hillside 1,000ft to a pass.

I arrived at the road and got ready to hitch into town to get some food and some Bosnian money (I had tried three stores and two gas stations looking for an atm aka “bankomatic” with no luck.)  I went to change my glasses from sunnies to normal lenses and realized the case wasn’t where it was supposed to be!

Glasses are important, so I begrudgingly descended the hill again and walked all the way back to the café, 6.5 miles back.  I looked and looked along the way, and asked at the cafe, but no glasses.  So I shrugged it off and hiked back up the hill, arriving back at the road on the pass as it was getting dark.

I attempted to hitch for an hour in the dark and just as I said to myself, “last car, then I camp and try again in the morning.” a friendly older Croatian gentleman actually stopped and gave me a lift to the hotel in Tomislavgrad.

What a day to end week five of this hike!

My name is Dillon, trail name "Enigma". My favorite trail snack is gorp. Favorite trail magic is either fresh fruit or craft beer, depends on the day. Ice cream is also on the list. This year I am thruhiking The Pyrenees High Route (HRP) and The Via Dinarica Trail (VDT)