A terrifying video uploaded to Youtube yesterday shows footage in which an adult cougar follows a Utah hiker for six minutes on the Slate Canyon Trail near Provo, UT. The video shows a mountain lion steadily advancing on the man as he walks backward up the trail, never turning his back on it. The cougar charges several times, lunging suddenly with teeth bared and claws splayed. The man keeps up a steady stream of commentary during the encounter, continually talking, shouting, and grunting at the mountain lion before throwing a rock to scare it away. The cougar is believed to have been defending her kittens rather than acting in a predatory manner. Mountain lions rarely attack humans.

Kyle Burgess is out for a run amidst the beautiful fall foliage of Utah’s Slate Canyon trail when he encounters what he thinks are bobcats on the side of the footpath. They’re actually mountain lion cubs. This becomes apparent a few moments later when the cubs’ mother pops out of the woods. She begins following Burgess up the trail, likely “escorting” him out of her territory to protect the cubs. The cougar follows the runner for six tense minutes before being scared off when he throws a rock at it.

Burgess breathes a sigh of relief when the cougar finally runs away (with terrifying speed and agility, we might add). “Yeah, not going back that way,” he can be heard saying in the video as he turns the camera down the trail in the direction the mountain lion just bolted.

According to the National Park Service, mountain lions are generally elusive and avoid humans. Cougar attacks are rare, but they do happen sometimes. The best way to stay safe is to hike in pairs or groups and keep children and pets close when traveling in mountain lion country. Never approach a mountain lion if you see one. Remain calm and stand your ground. Make yourself appear larger and don’t crouch or bend over, as this may make you look like prey to the big cat.

If the cougar approaches or acts aggressively, don’t run away. The lion may instinctively give chase if you do. Always face the animal—never turn your back on it. If the cougar continues to advance, act intimidating by speaking in a loud voice and throwing objects like stones, branches, or water bottles at it. It’s essential not to bend or crouch in the presence of a mountain lion, even to pick up stones and sticks from the ground to throw at it, because the lion may attack when you do so. In the unlikely event that the animal attacks, be prepared to fight back.

Burgess likely did the right thing in this particular incident by staying calm, facing the animal, and attempting to intimidate it with loud noises. Throwing rocks was what scared the mountain lion away in the end. The cougar was likely following him to put distance between him and her cubs. Still, it’s unclear how long she would have continued approaching or what would have happened next had Burgess not successfully deterred it. 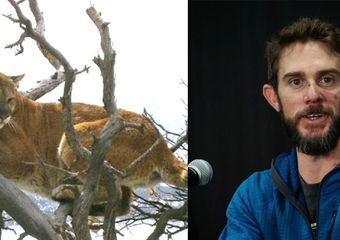 Travis Kauffman, Trail Runner Who Killed Mountain Lion with Bare Hands, Details AttackTravis Kauffman spoke publicly for the first time since his life-and-death encounter with a mountain lion in Colorado, describing in vivid detail how he wrestled with the cat before killing it. Kauffman, with scars from the attack visible on his…Read More