Waking up at Niday we had heard about Four Pines hostel which was free and also shuttled you to an all you can eat buffet called the homeplace which is pretty much famous in the thru hiker crowd. We had a full day of hiking to get to Four Pines though. There first part of the day started with a nice hill and the end of the hiking day ended with another big hill but lead to an awesome rock formation called Dragons tooth. Getting to the site going northbound is steep but doable. Going down the other side of it requires a little bouldering and hand over hand climbing but it was fun and a lot of day hikers were enjoying it. After the long steep walk down the mountain we made the short walk to Four Pines Hostel. Four Pines hostel is a very unique place. It’s definitely a spot not to miss on your thru hike. I hung my hammock in the barn and then proceed to eat a lot at the homeplace with other hikers that joined in on the fun. My only morning at Four Pines consisted of waking up late and noticing all the chickens were in the barn. Like I said it was an interesting place. 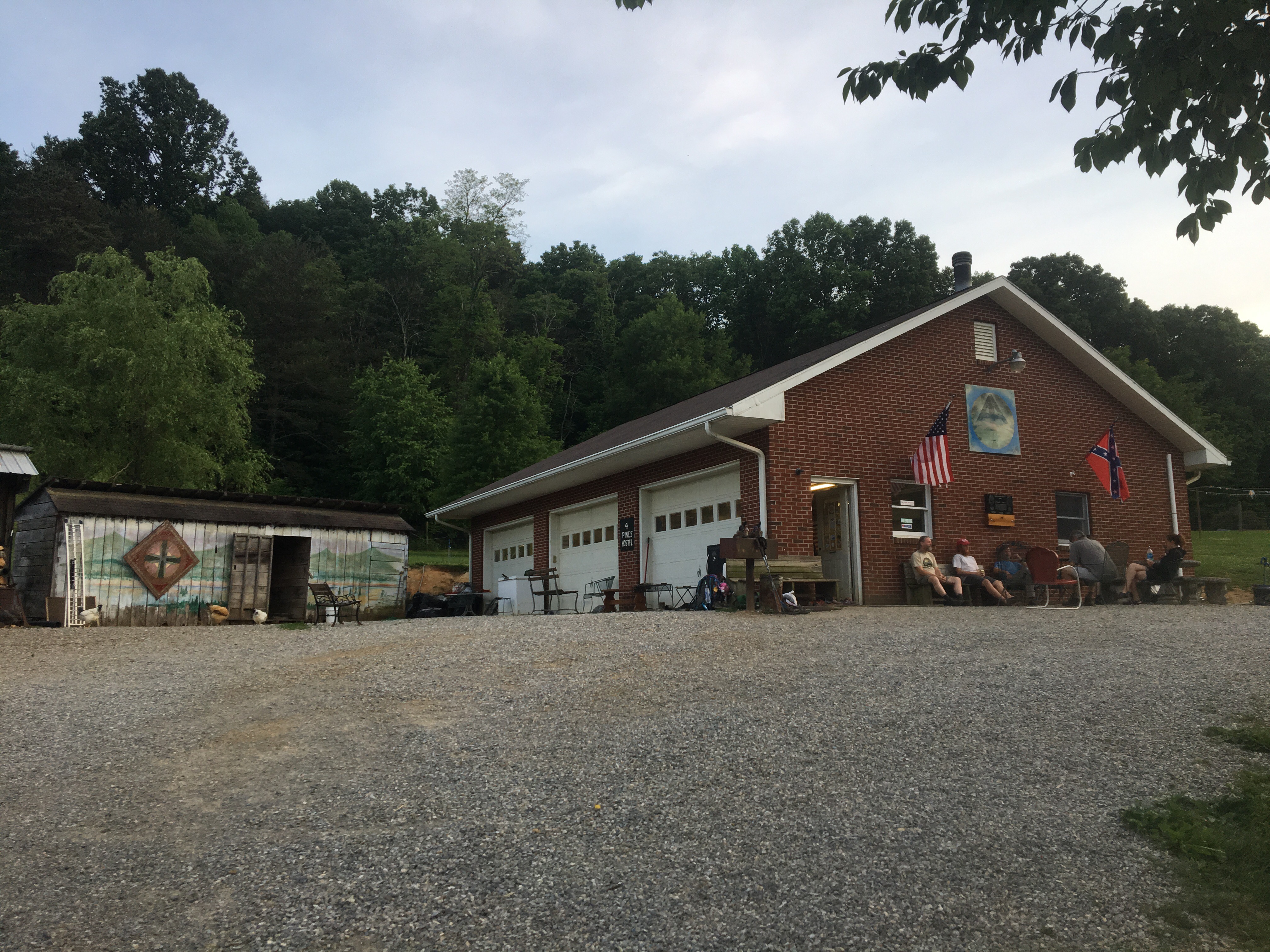 Leaving Four pines the weather decided to rain to make the hike more interesting but the first day of the two was to the famous McAfee Knob. The weather was looking like rain but when our group got close we pushed hard to try to beat the storm and get a good view of the knob. In the end it rained right before we got to the knob but it was still awesome to see the knob. After all the AT doesn’t cater weather to your hike. We went up to the knob and got some quick pics and the rain let up just a little and we got to enjoy the view even though it was cloudy. Walking to the shelter that night the weather began again and we got soaking wet on the way. Always a bad thing when your not walking into town. We also had to go over a place called Tinker Cliffs in the rain. We stopped at the shelter and planned to head to Daleville, Va the next day and take a zero the next day. 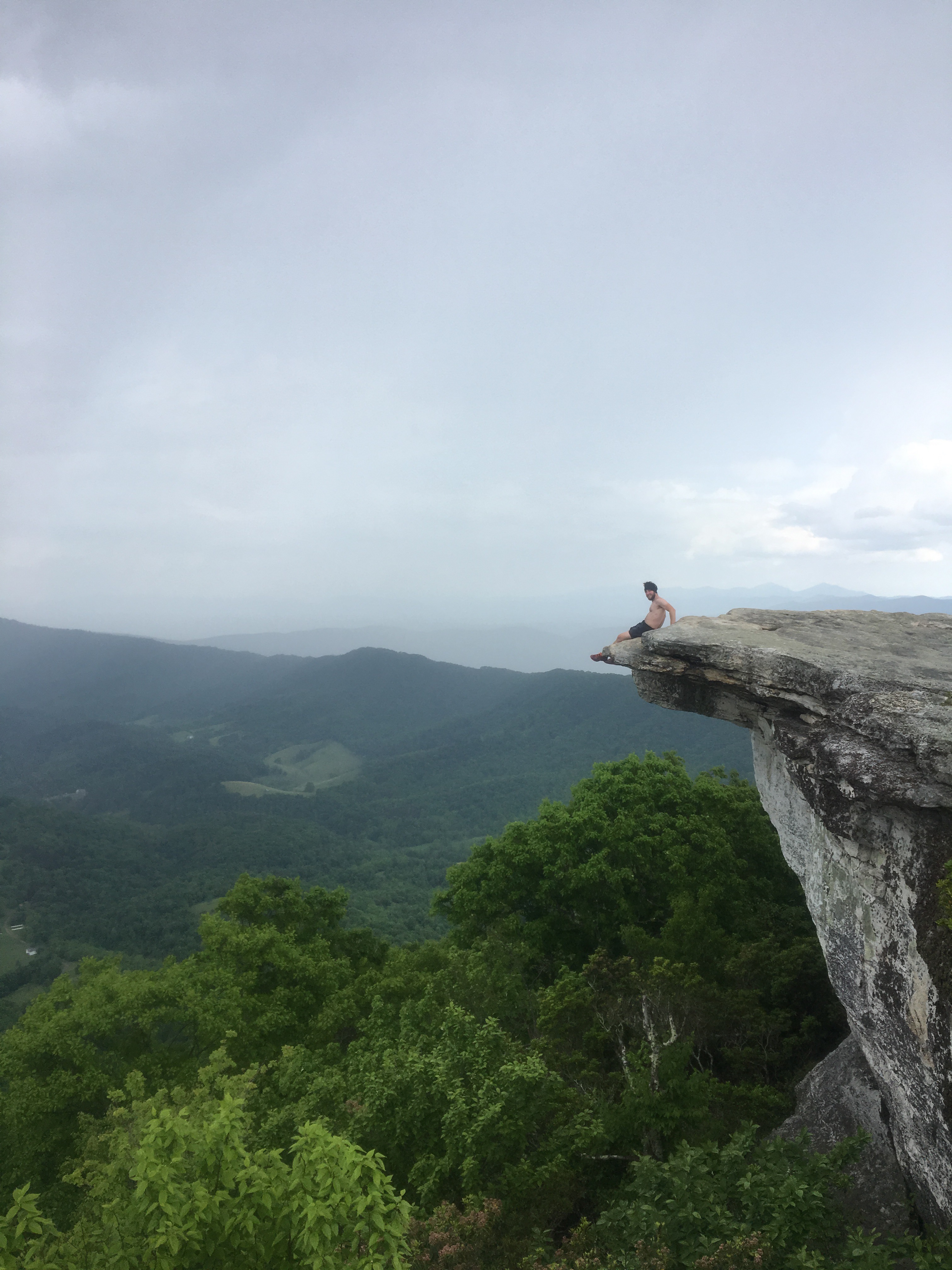 After a zero day in Daleville I was ready to get some more miles in before going to see family since I’d pass 30 minites from where I lived before the trail. The weather forecast was rain on top of rain for two or three days. I debated taking another zero to wait out the rain but decided to go and try to get some miles in when there was a little break in the weather. This turn out to not be the best choice. A few hours into the hike it started to drizzle and then after setting up camp in the rain it started the real stuff. Everything about trail life gets an added degree of frustration when you added the phrase in the rain after the task. I made it 11 miles and luckily got set up before the downpour started. But due to a slight oversight of getting a new 11′ hammock for my 11′ tarp I got one end of my hammock a little damp and had to shorten it’s Ridgeline to get everything important under the tarp and had to add several new drip lines to prevent a reoccurrence. Going from town into a rain storm is a real shoot to morale but lucky for me I found a nice puddle to put my hammock over! In the few miles I’ve hiked I have learned that you just have to laugh at problems and just embrace the hardships of the trail. 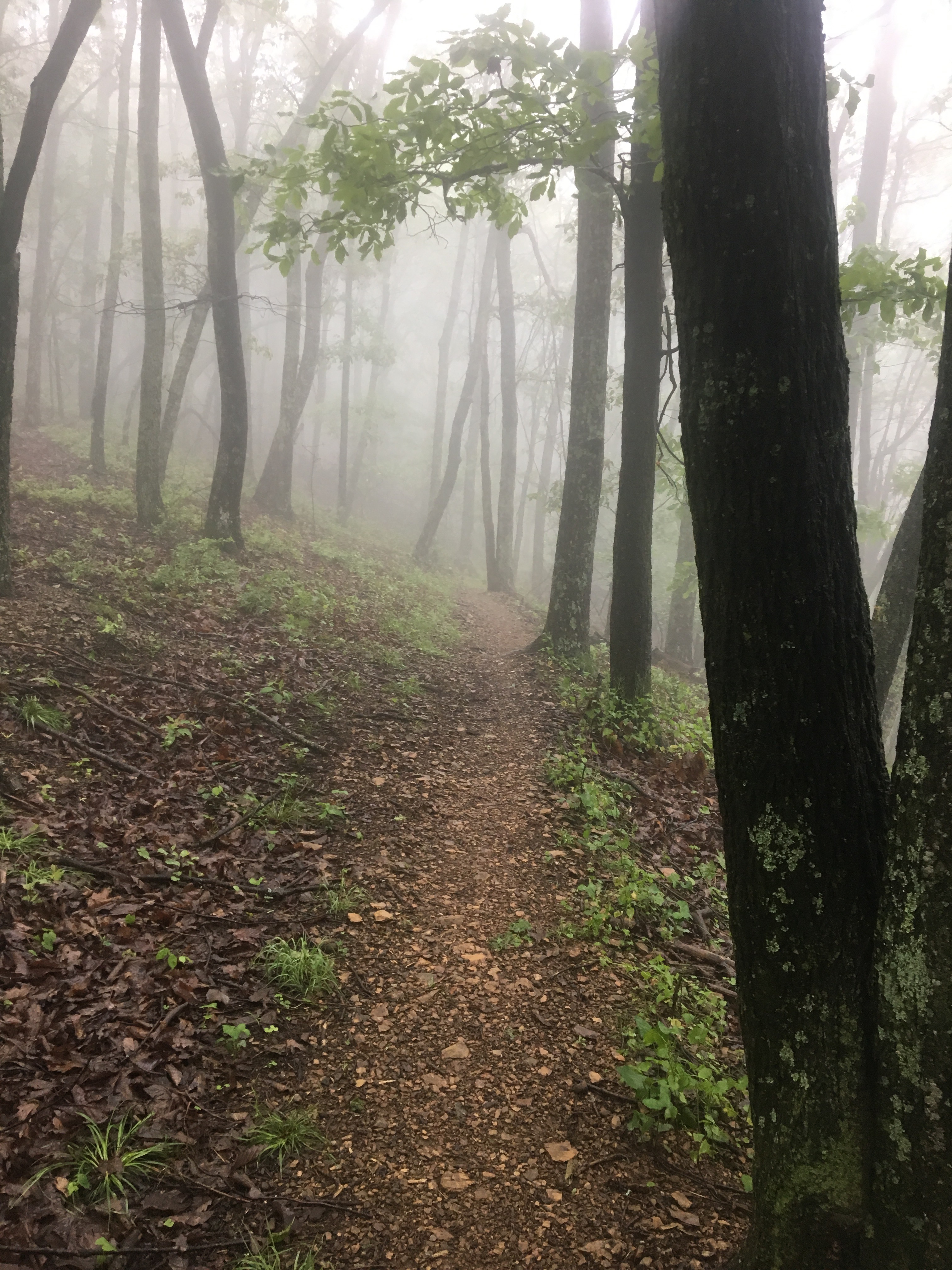 It had rained all night and morning to start this day. I got up and noticed the water puddled around my stuff under my hammock but luckily my extra work on my hammock drip traps had prevented any additional water from raining on my head. Also all the rain had caused little bits of mud to splash up and cover a lot of my stuff. This is a common occurrence with rain on the AT for hammock dwellers if you don’t cover the stuff under your hammock well. Also in the morning I noticed a guy who was in a hammock was now sleeping on his pad on the ground under his tarp. Apparently his hammock had ripped to the point where he feel through it at 2 am. Hope he gets a new hammock ENO. We set out to get some miles in knowing we were just going to be camping in rain again that night. At our first break some people we took a break with mentioned middle Creek campground and the grill the had. Also they had a free shuttle which is gold to lazy hikers. We decided to go and at least eat at the grill and then decided what to do after. We got to the pickup parking lot just before it started to rain again. When we got to middle Creek we decided to rent one of their small cabins. At $45/night it was reasonable and dry.  It rained the entire night so the cabin was a good call. A few of the other hikers that decided to go back and camp woke up basically sleeping in a puddle and using their pad as a flotation device. Glad we stayed at the camp ground and also glad I hammock and hopefully short of catastrophic failure don’t have to worry about waking up in a puddle. 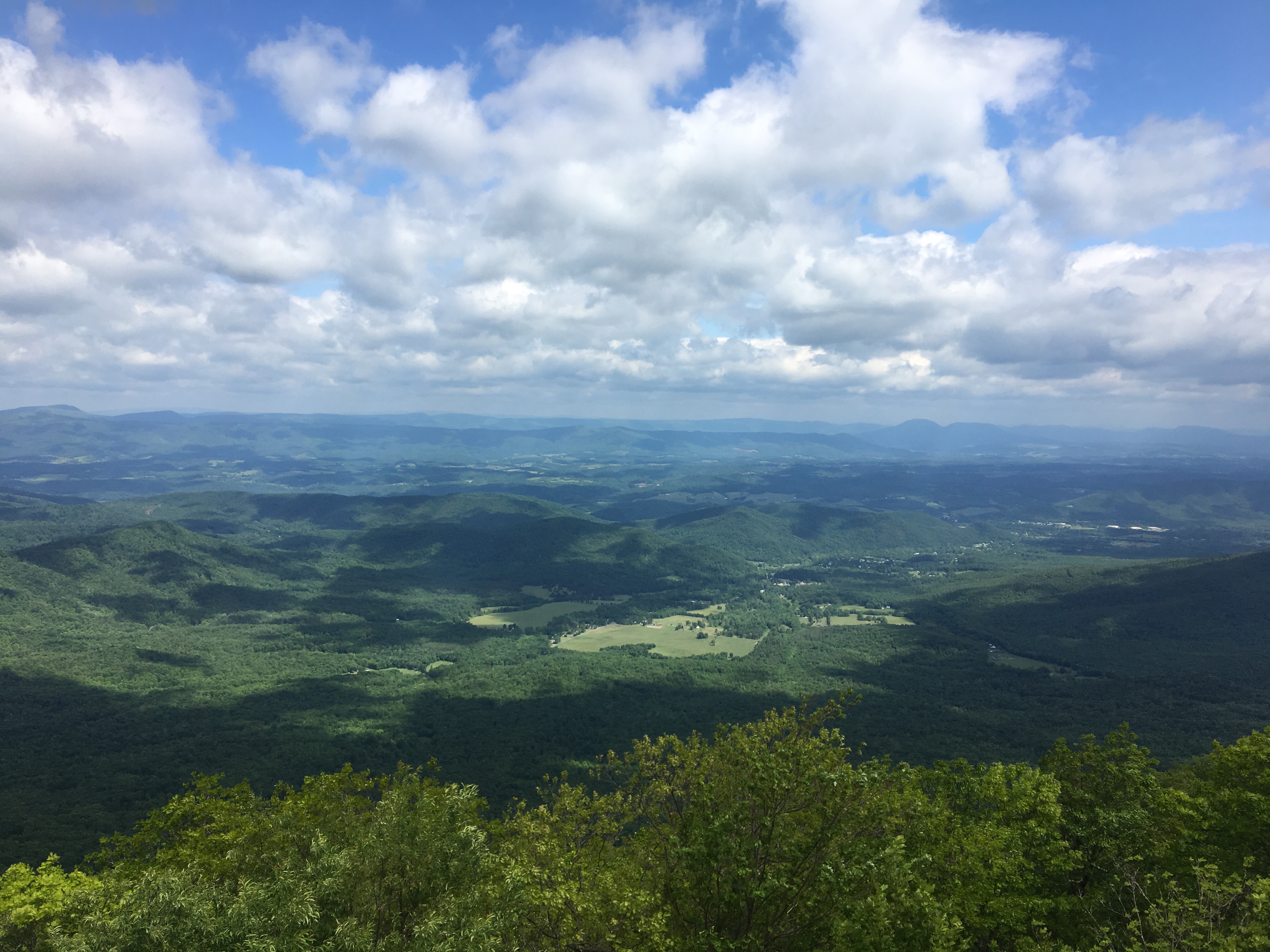 After our dry night in a cabin that gave a new meaning to the word rustic we again decided to go get some miles in before the weather hit again. We were hiking in a bad rain front that was on the area for a few days and didn’t plan to clear out until the next day. So we went back to the trail head and did what we could . The climb out of middle Creek again provided Virginia is anything but flat. We hiked over our first hill and stopped at Bryant shelter for lunch it’s a nice shelter with ample room. We pushed over two more mountainous hills and arrived and cornellus Creek shelter at about 2, the issue was the weather was supposed to return around 4 and the forecast called for wind gusts up to 40 mph. So instead of continuing to climb and deal with rain and high winds possibly on exposed Ridgeline above 4000′ we decided to camp at cornellus Creek and do a bigger day to Glasgow, Va the next day. 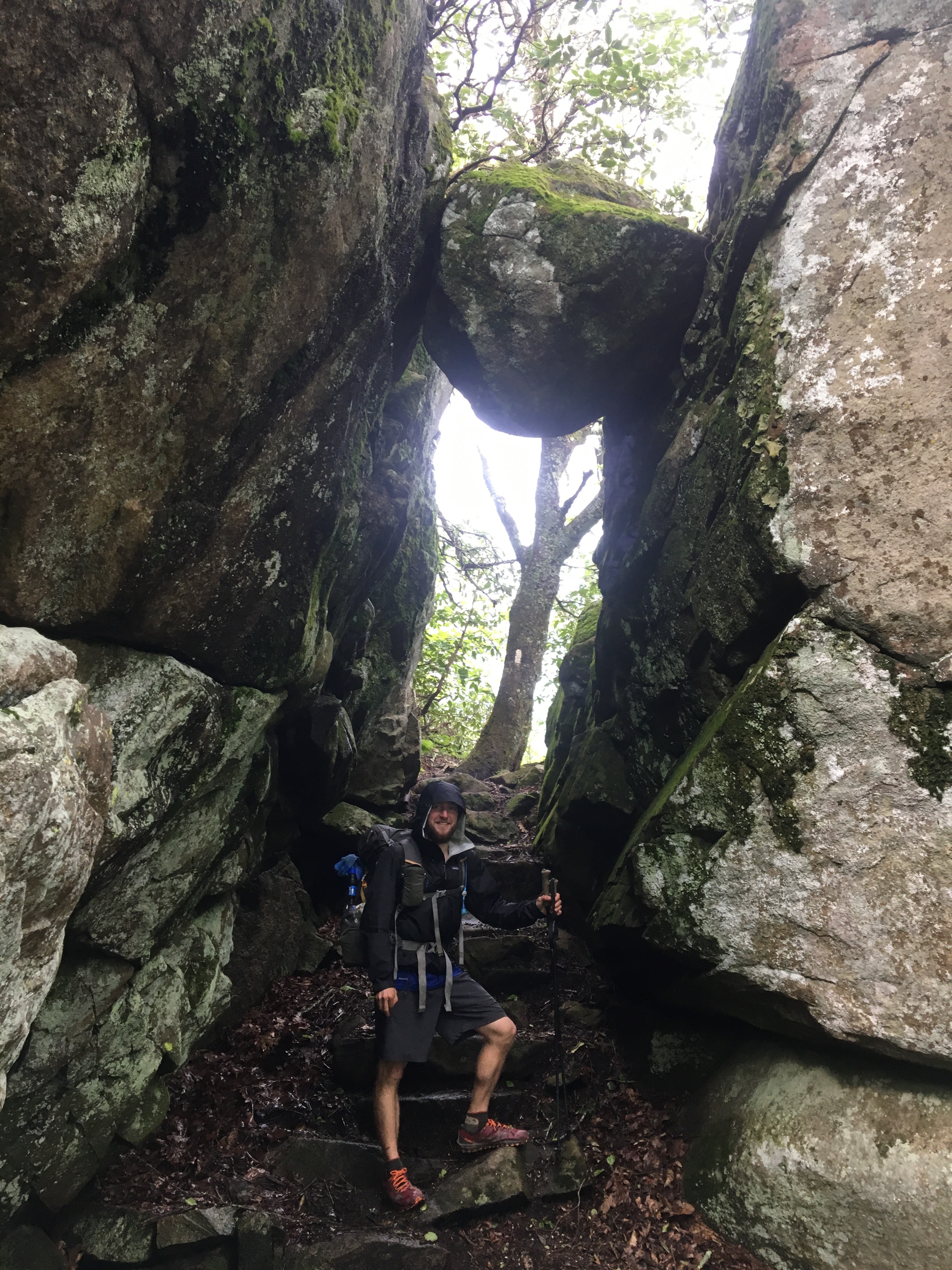 After setting up camp early and hunkering down for what ever the weather had prepared for the folks staying at the shelter we only had to deal with a few scattered showers and cool wind. Waking up I saw something I hadn’t seen in days, the sun. Even though it was only for a few minutes seeing the sun peek through the clouds was a huge morale booster after the duluge of rain the entire south eastern US has been through . We hiked early to get 20 miles in time for my parents to pick me up. The day was pretty fast and hiking was not to bad after we walked over the knob we began the long descent to the James River foot bridge. After lunch we got to the bridge and walked by several signs to not jump off the bridge . There had been so much rain I’m pretty sure the river would sweep anything that feel in it away. We got to the parking lot and I gave some other hikers a ride and headed to Lynchburg, VA to see family and celebrate my 60 day or two monthish anniversary. Gonna go back and start back at it on Sunday. 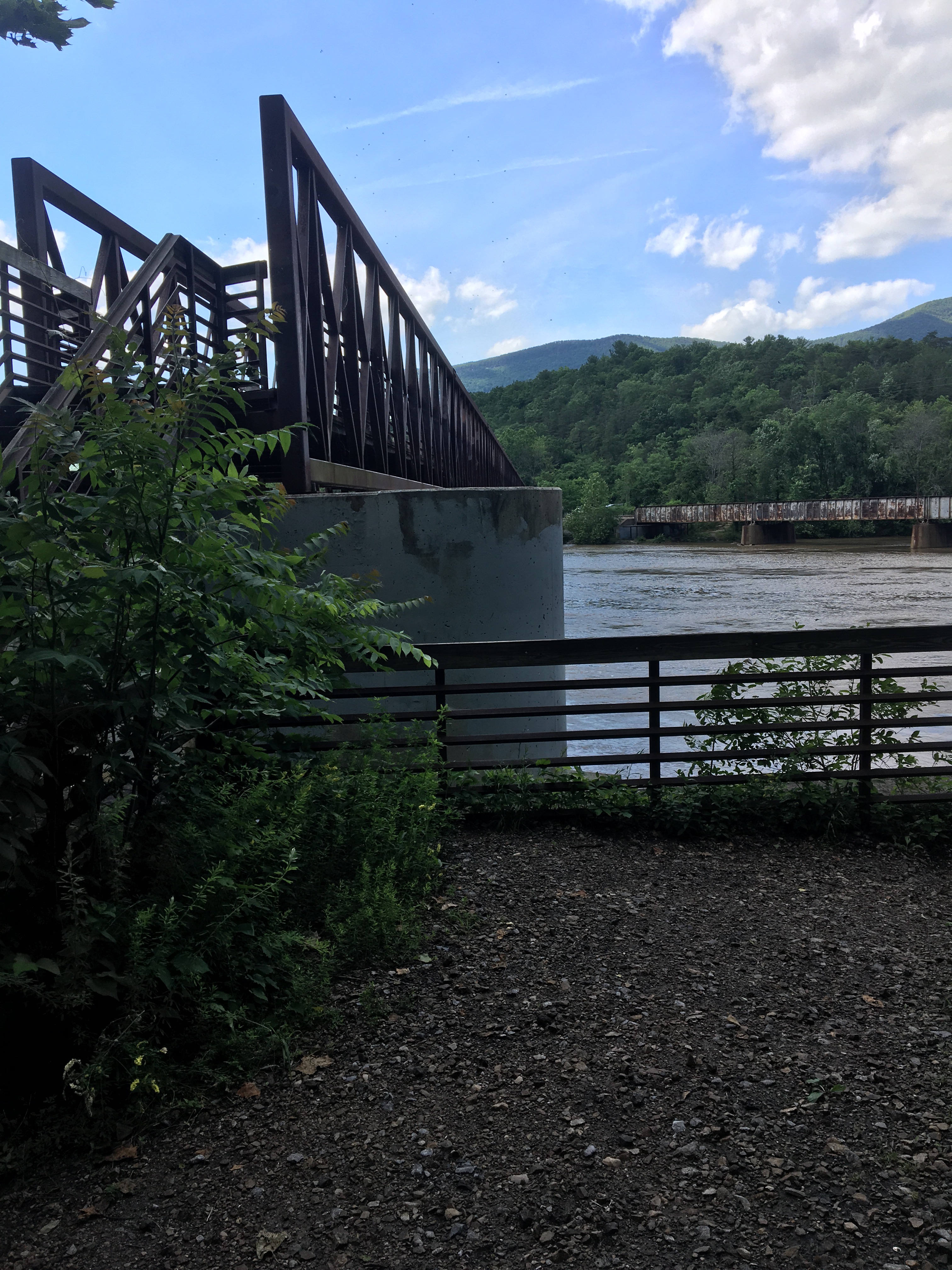