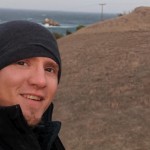 Week 2- The Realization: This Just Isn’t For Me

I walked the stretch of trail from Cheaha Trailhead to Blue Mountain Shelter. I have walked this same section a handful of times. The shadows of rock and tree looked longer, darker than I remembered. I told myself, “it’s just late.” The climbs loomed steeply overhead, more vertical than I remembered. I assured myself, “It was a long couple of days.” The shelter from behind looked smaller than I remembered. Its inside more cavernous and exposed than I recalled. This wasn’t the same place I have been before.

Let’s back up a couple of days and attempt to follow a jolting train of thought from my notes.

The night before leaving Next Step 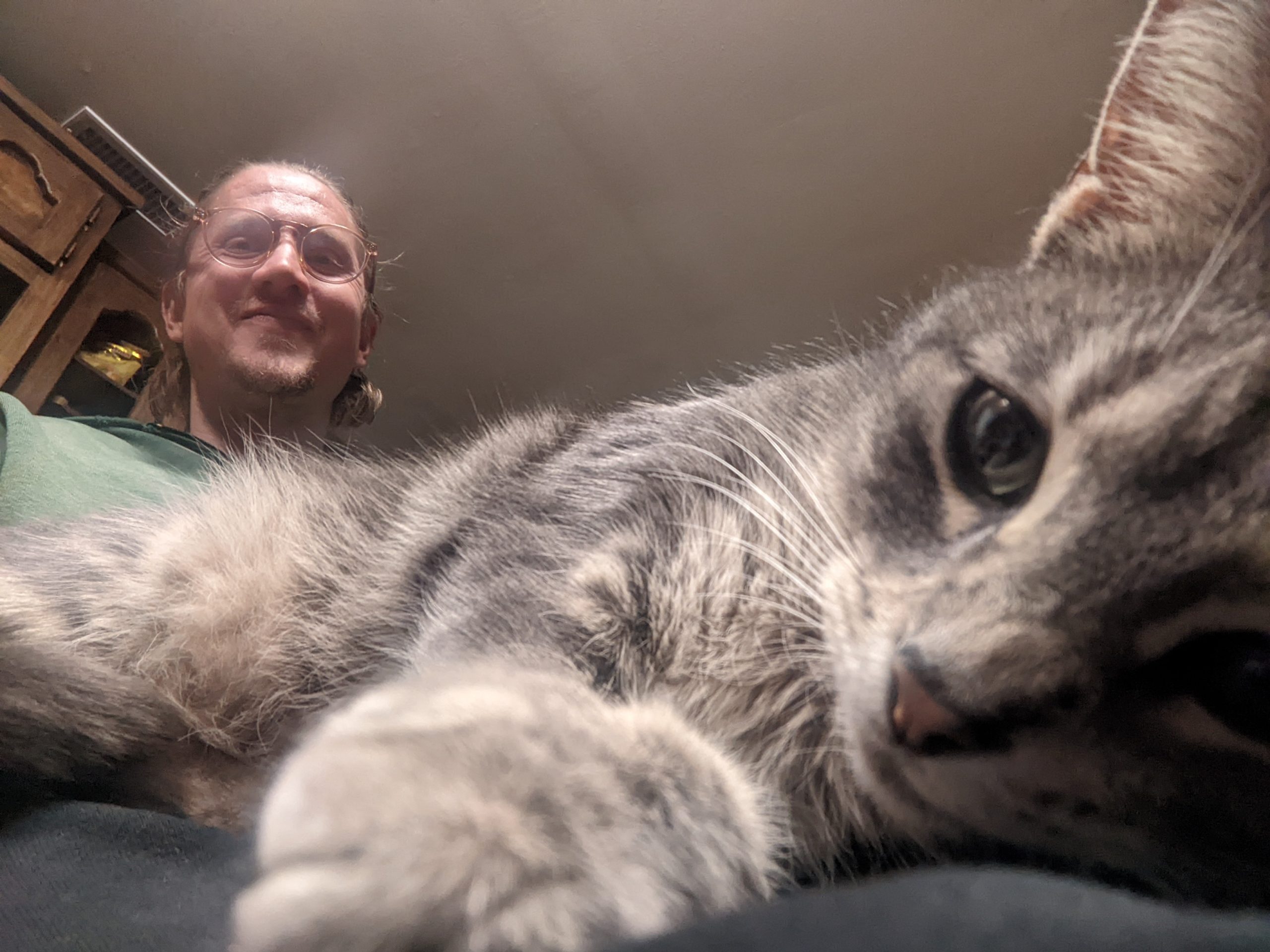 The beautiful, loving Mama Cat from Next Step Hiker Hostel

I felt my bones rested. My resolve to keep going toughened. Yet, I felt this gnawing from within my celiac plexus. I pushed it to the side, “I’m only homesick.” Spending the next 10 minutes, I filled two pages of what it meant for me to be home- a state now more than a place. I wrote to myself after, “…. one hour, one mile, one minute,… one step at a time- take your time, love and explore!!!” The hostel kitty at Next Step Hiker Hostel cuddled up to me and I fell asleep smiling.

14 miles through Porter’s to Adam’s Gap

Beginning the day with a brief lift from Niel, a local trail angel, I attacked the day early. One mile, one step at a time, the miles were etched away. This section of trail offers miles of ‘rock garden,’ a series of unsettled stones without reprieve. Hard on the ankles and slow on speed, I had lots of time to focus. I was loving the rock hoping, genuinely. The weather was much fairer than the previous week… Man, I’m the only person out here- push that to the side… Wow, I’m coming into the valley now. It’s so quiet. Peaceful… Wish I could share this with someone- maybe later. My chest grew tighter through the day… I found a water source and attempted to make a call to the outside. No service. The night grew around me and as the forest fell asleep, so did I. I awoke with no pit in my chest, ready to accept the day’s challenge. 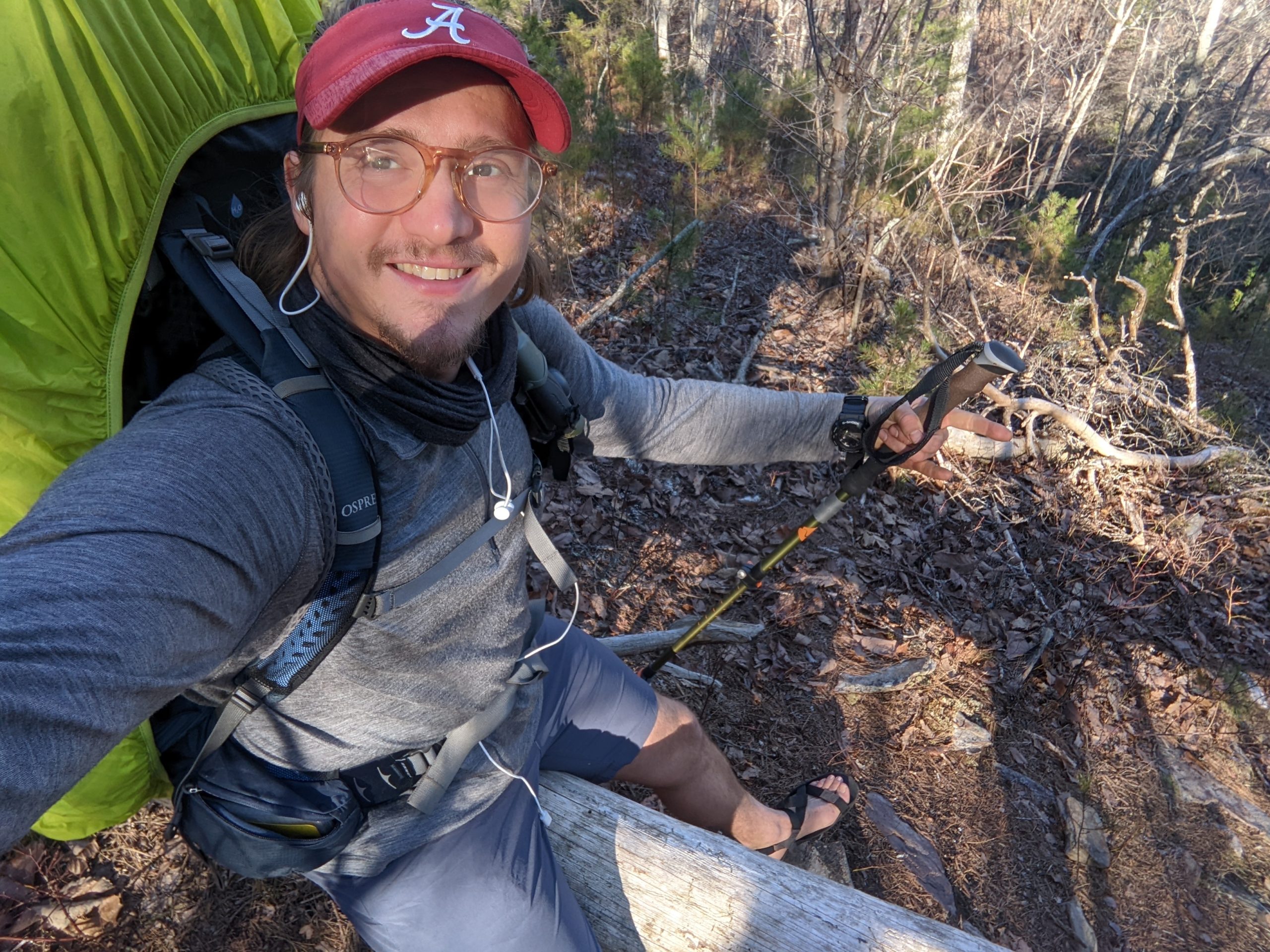 Taking some time to slow down and bump along to my music.

The next day held quite the climb. The section referred to as “Stairway to Heaven” ascends the southern face of Cheaha, through a rock garden, up a series of switchbacks that blend into the raw rock. It’s easy enough for one with deliberate step and sharp eyes, but it’s slow going. I found myself at a dead end of a false trail a couple of times, but keeping myself calm, I gently guided myself back to the trail. Fatigue invited doubt, and doubt brought their friend- that familiar and evermore established gnawing in my chest… What an escape it’d be just to see another human face…

I caught the negativity growing and took a seat. Calming down, I found myself skipping stones off tree trunks. It dawned on me: I have been in the woods for a week and haven’t played once! I decided, only six miles further than the day before, here is camp. Here I will rest, get a fire going, and revel in the outdoors! Later than I was used to, the sunlight illuminating far longer at altitude than in the shadow of the mountain, the day ended and so did my adventure battling the trees with a wooden sword. I called the Mumzie and felt her warmth through the phone. The nighttime quitted my mind. I fell into a restful sleep. My dreams carried me off to visit my father. I woke with a light heart and step. 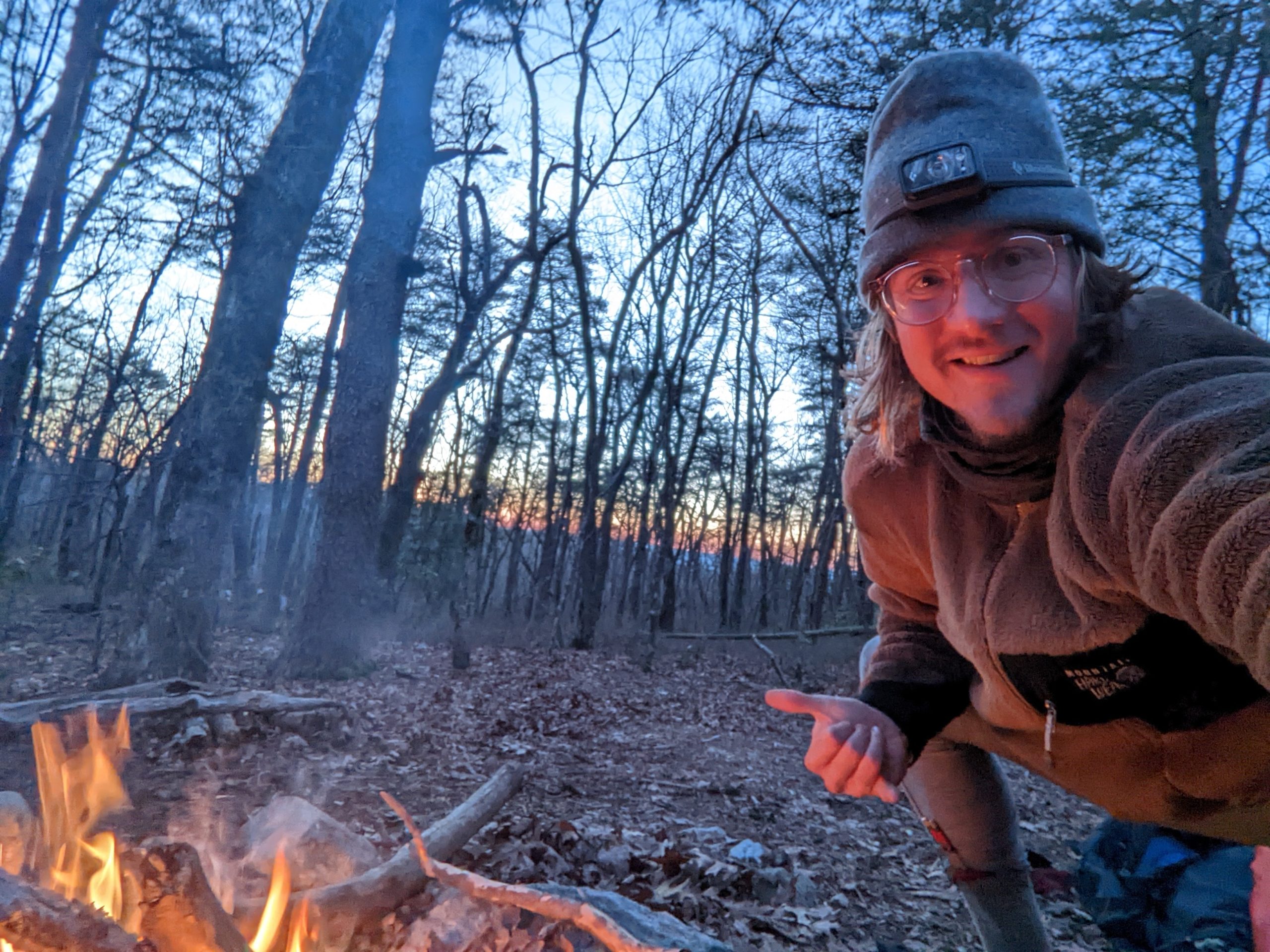 Feeling relieved after the climb and a genuine joy reminiscent of childhood after spending the day playing outside.

Trekking on with Hope

The idea of seeing another human face got me up and moving quickly that morning. In fact, I walked so high that I named and sent loving words through the wind to just about everyone of any meaning to me- yes! even Nikki, and Elaine, and the other 100 contacts I sent this to! 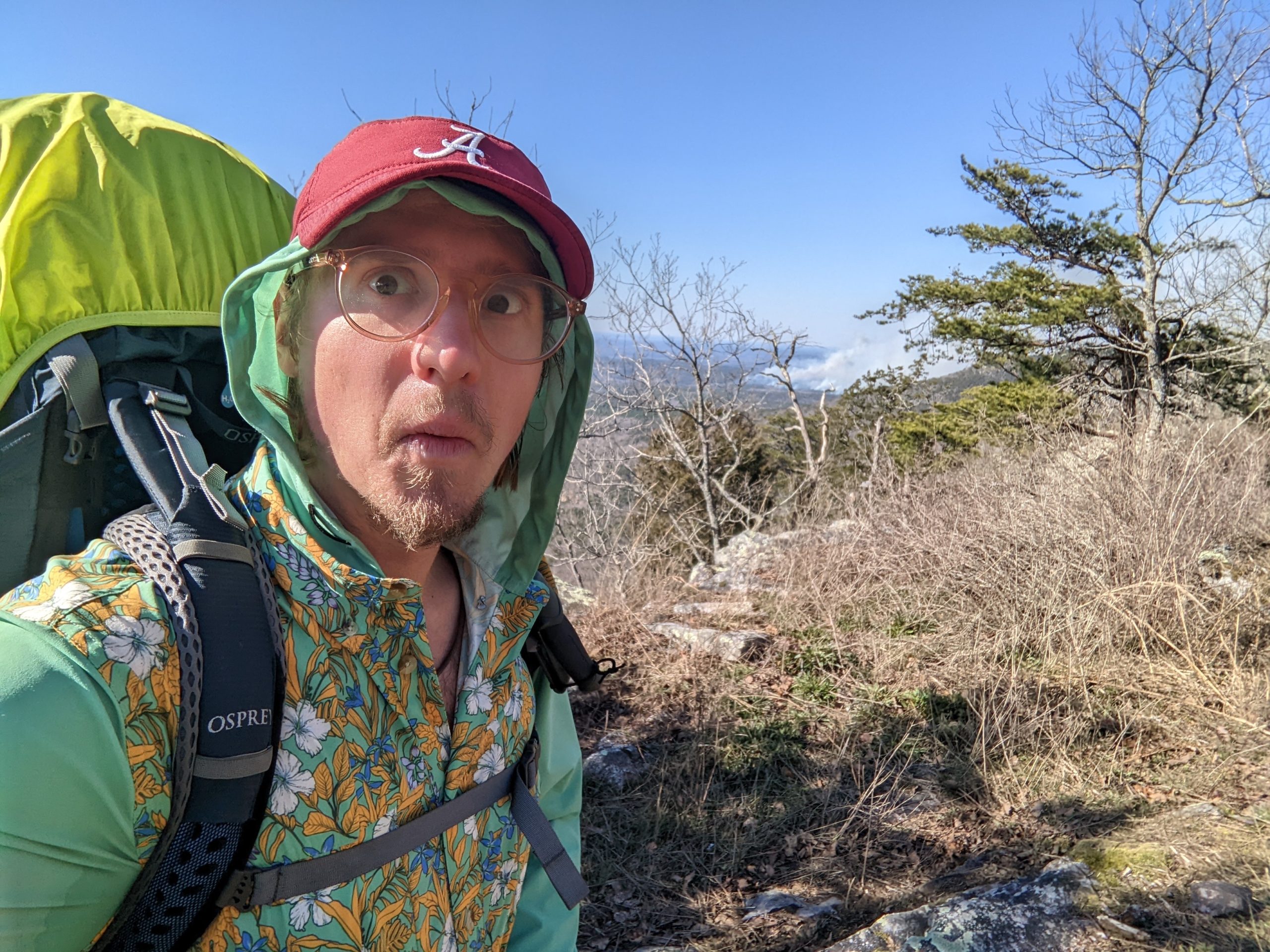 A momentary flitter of the heart! Contacted Kim at the POC and she let me know it was only a prescribed burn

But the miles grew longer. No longer did the trail mix provide energy. The water served only to wet my palate, not to alleviate the feeling of total drain. The cavern in my chest opened more. It felt deeper. I fought to Cheaha and found the mountain spotted with tourists. They interacted politely, but all carried on with their lives and away with my hope for genuine human connection.

Now came that slow and deliberate march towards the shelter. The birds’ songs sounded melancholy. The once peaceful whispers of the streams murmured doubt. As I sat down in the shelter, the reward of a hard day’s work seemed empty. I fell inwards. At no other time in my life have I felt a deeper self-love or understood how meaningful every connection can become. Everything was clear save the ever-oppressive film of loneliness. 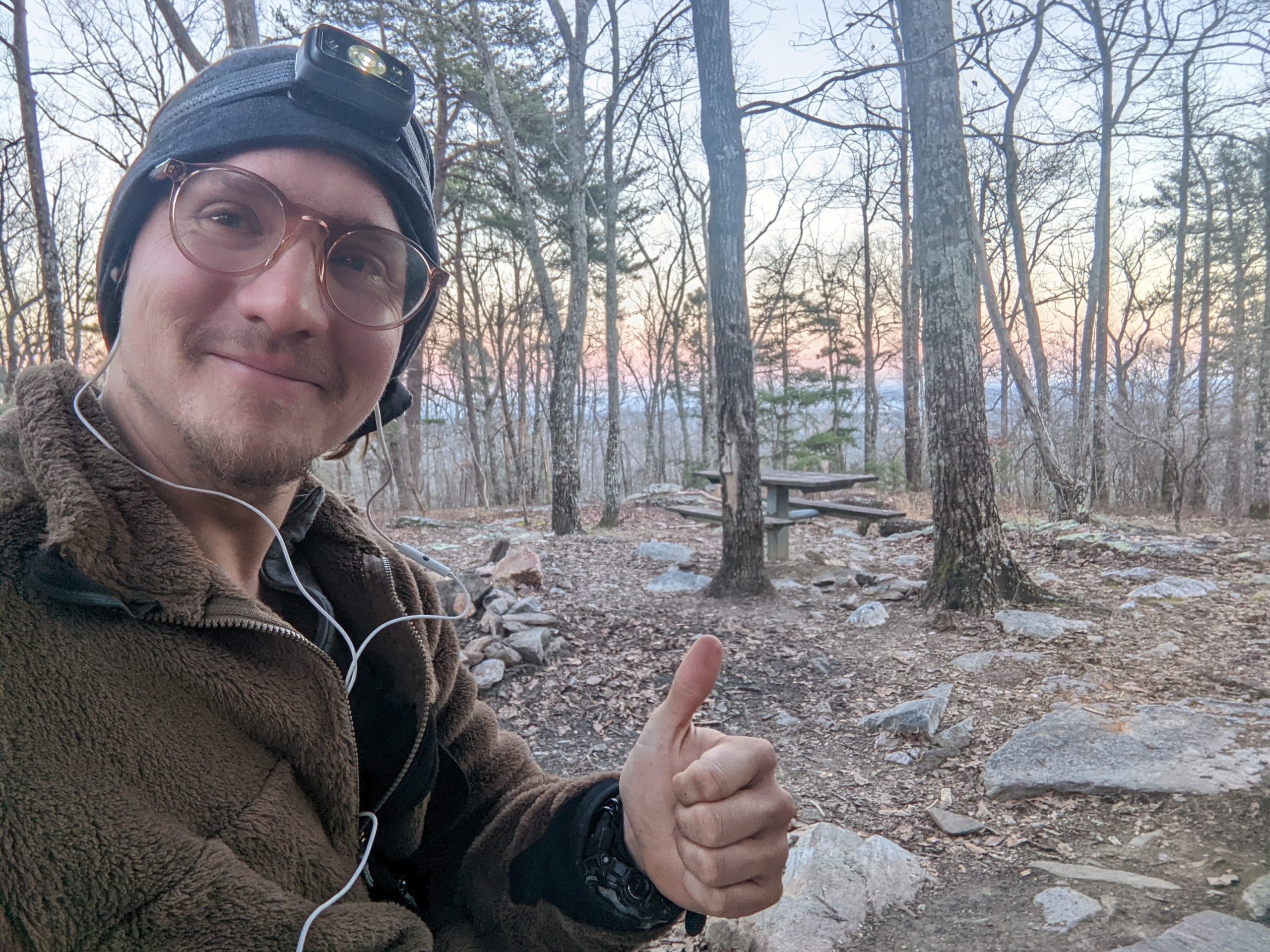 Tears of reconciliation- I’m going home but I’m not done. It’s going to be okay, whatever happens.

The place I know and love became unfamiliar and lonely. I began to cry, from a cry to a sob, a sob to a wail. I was just so. damn. lonely. Loneliness is not a monster- only totally encompassing. Within loneliness I learned the, sometimes adored and sometimes annoying, trait of needing emotional connection is inherent in my personality. I need to interact with people, share a laugh, and at least get a hug a day- so hiking alone is not an option for me (at least at this time).

In the Blue Mountain Shelter Log at Cheaha on 10. February it reads,

“I decided here is the termination of my Pinhoti thru-hike. The loneliness won’t leave me alone, que Otis Redding. Hours spent up and down mountains aren’t thaaat hard. Miles spent huffing and puffing, not that bad. But all that w/ a gnawing pit in my chest- I’m done. Rephrase. I’m terminating my Pinhoti thru-hike to preserve my AT thru-hike attempt. I’m going to revel in the people (even the snoring ones) – much love, Charles R Lampman” 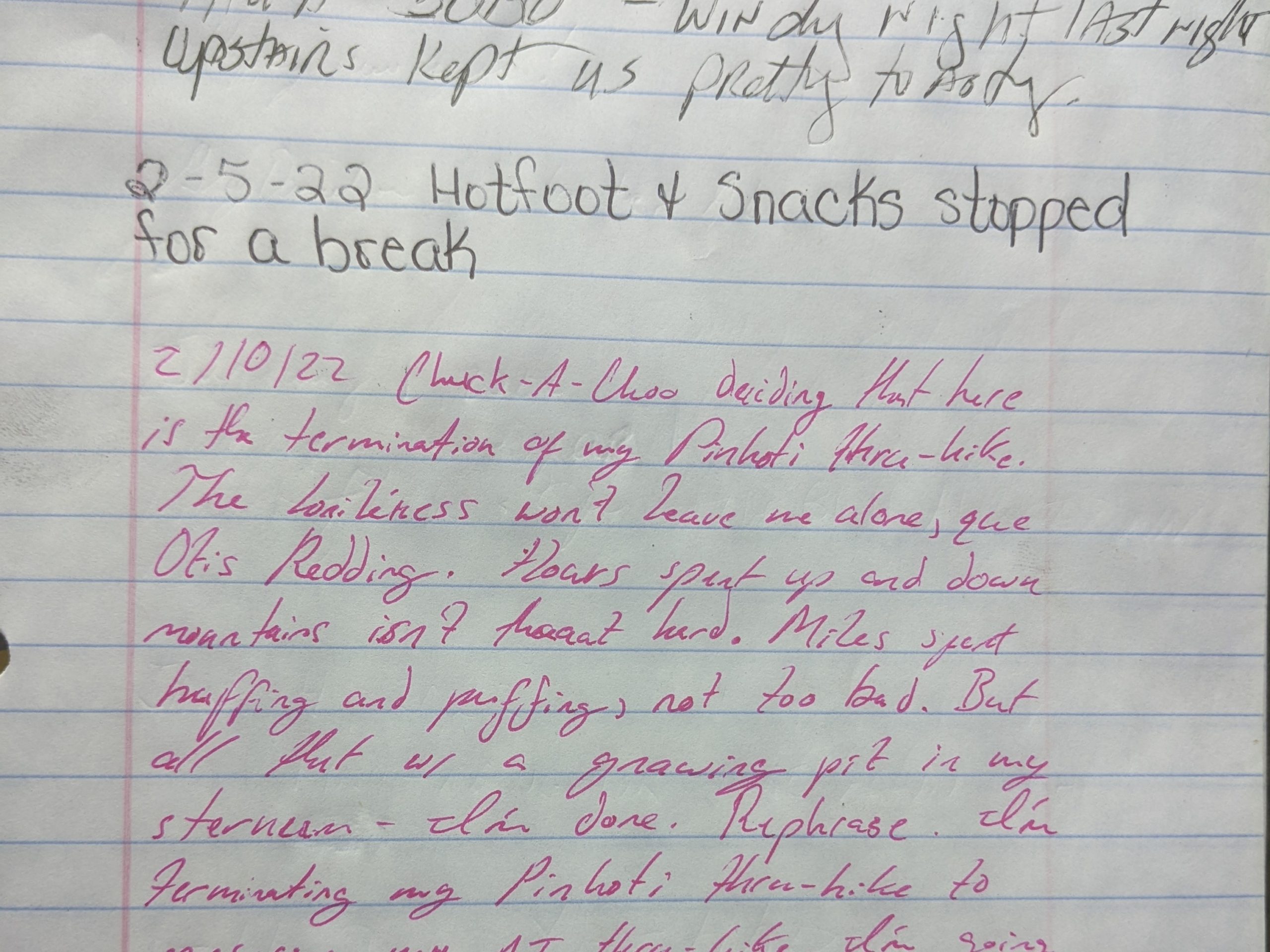 My entry into the Blue Mountain Shelter 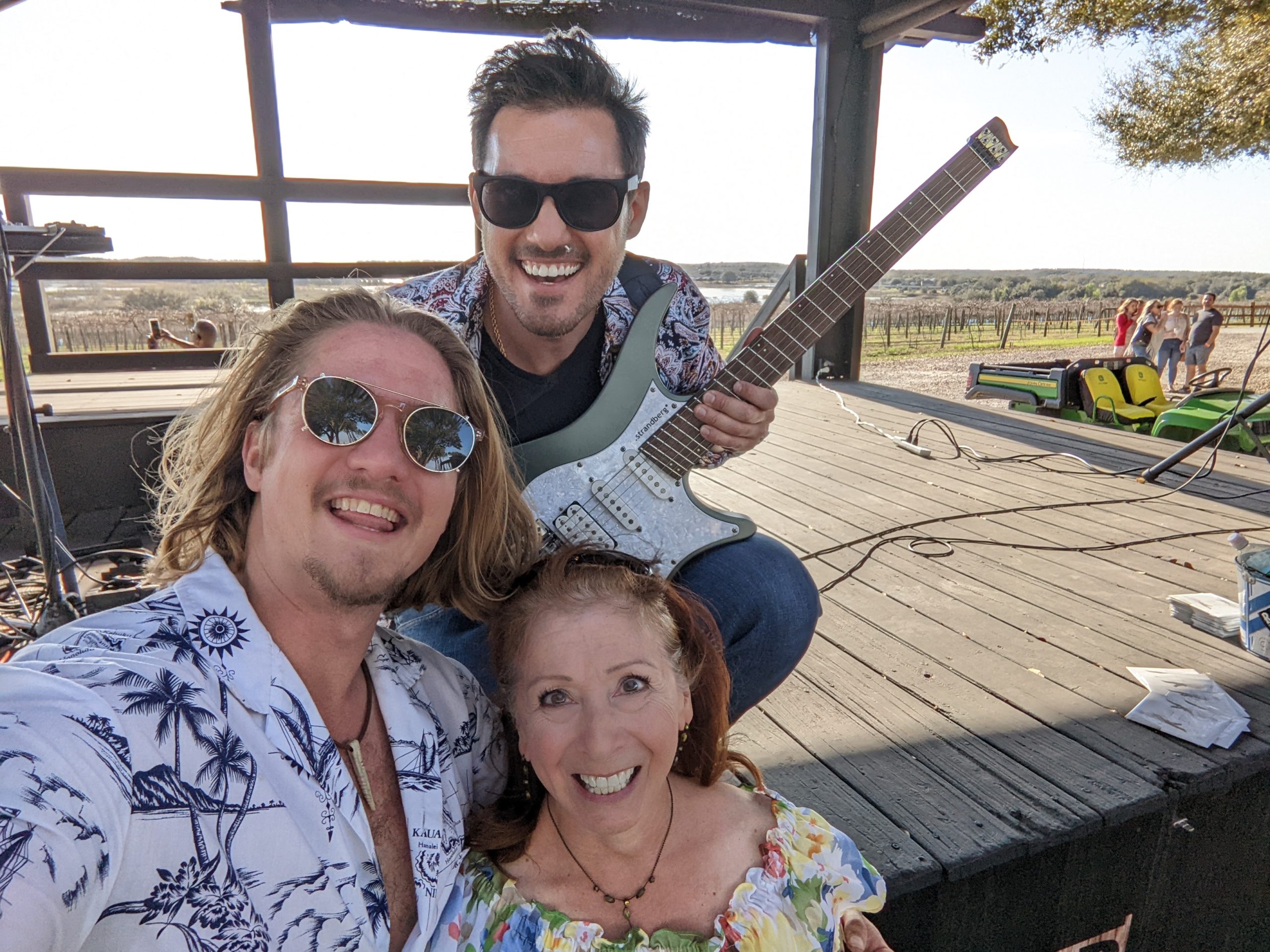 Mom and I’s photo with singer, live-loop artist Rob Hazen after dancing a fool at his performance in front of hundreds of strangers.

I write from the comfort of my parents’ camper in Florida. Surrounded by the love of my cat and two dogs, that pit has dissolved and been filled by the minor annoyance of interacting with one’s parents as an adult. I love it completely. It took a couple outings of dancing like a fool in front of hundreds with the Mama, a visit or two to the beach, and a good playlist- but I am healed and ready for what’s next. 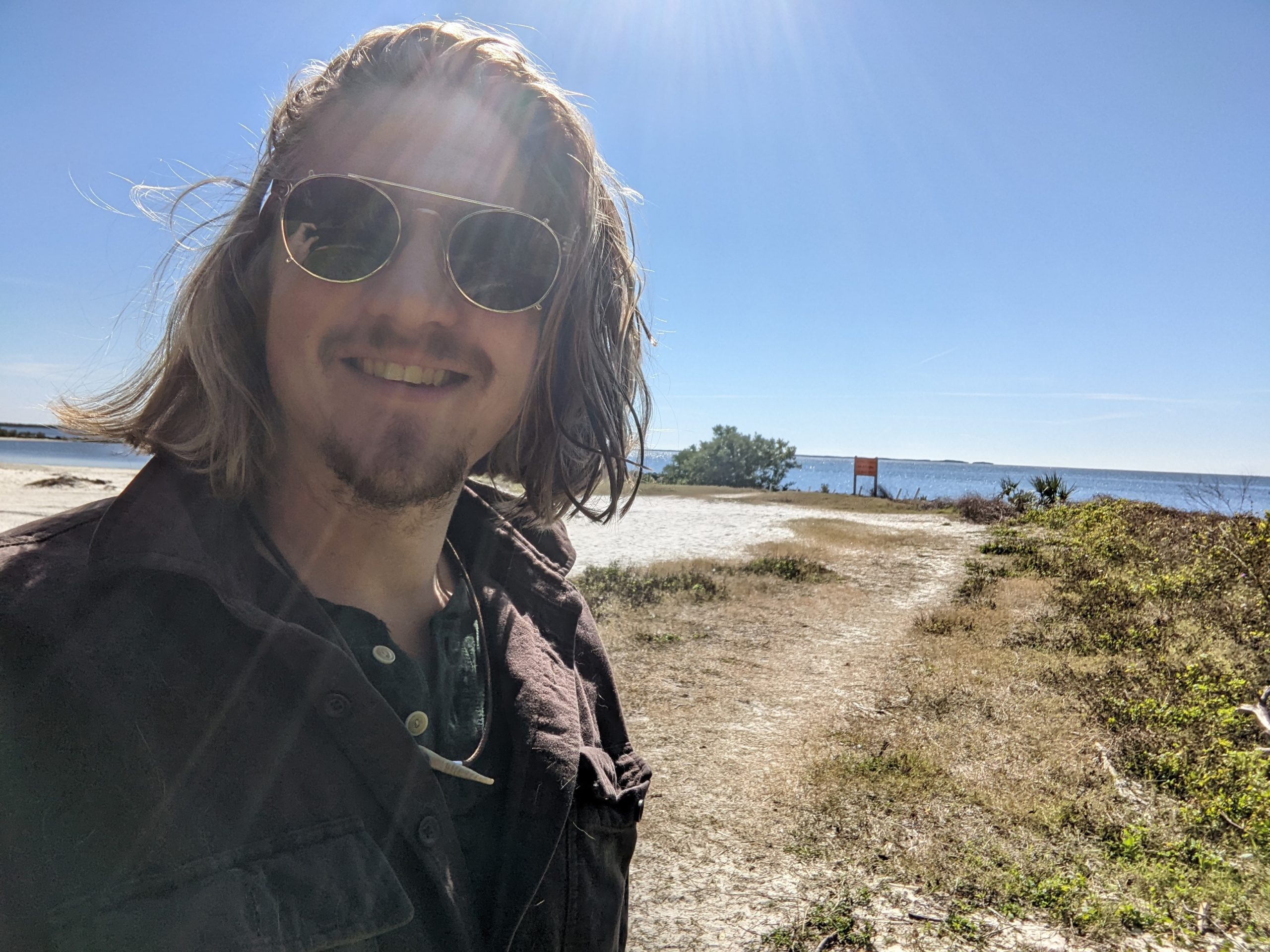 Had to make the few-hour detour to meet the love of my life- The OSHAUN!

I am not done. I’ve merely recognized a limit, and I will set my future up to maximize human connection. As Triple Crowner, and Jolly Gear owner Bennett Fisher, put it, “this was a nice warm-up/ shakedown hike!” I will start fresh at the Southern Terminus of the Appalachian Trail, the second week of March. Dead center of “The Bubble,” I know! People, people galore!

What's up, man?... All good here, bruv. The name's Charles, Chuck, Chaz, Charlie or any derivation of. A big lover boy with a wild streak living in the body of cool presenting nerd. Looking for peace and adventure in the back country. Stuttered in the beginning but I'm getting back on the trail at Springer Mountain to hike North. One day returning to the love of my life- The Ocean (pronounced O-SHauN)!!