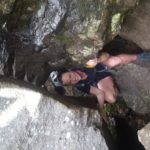 not human but sunflowers. 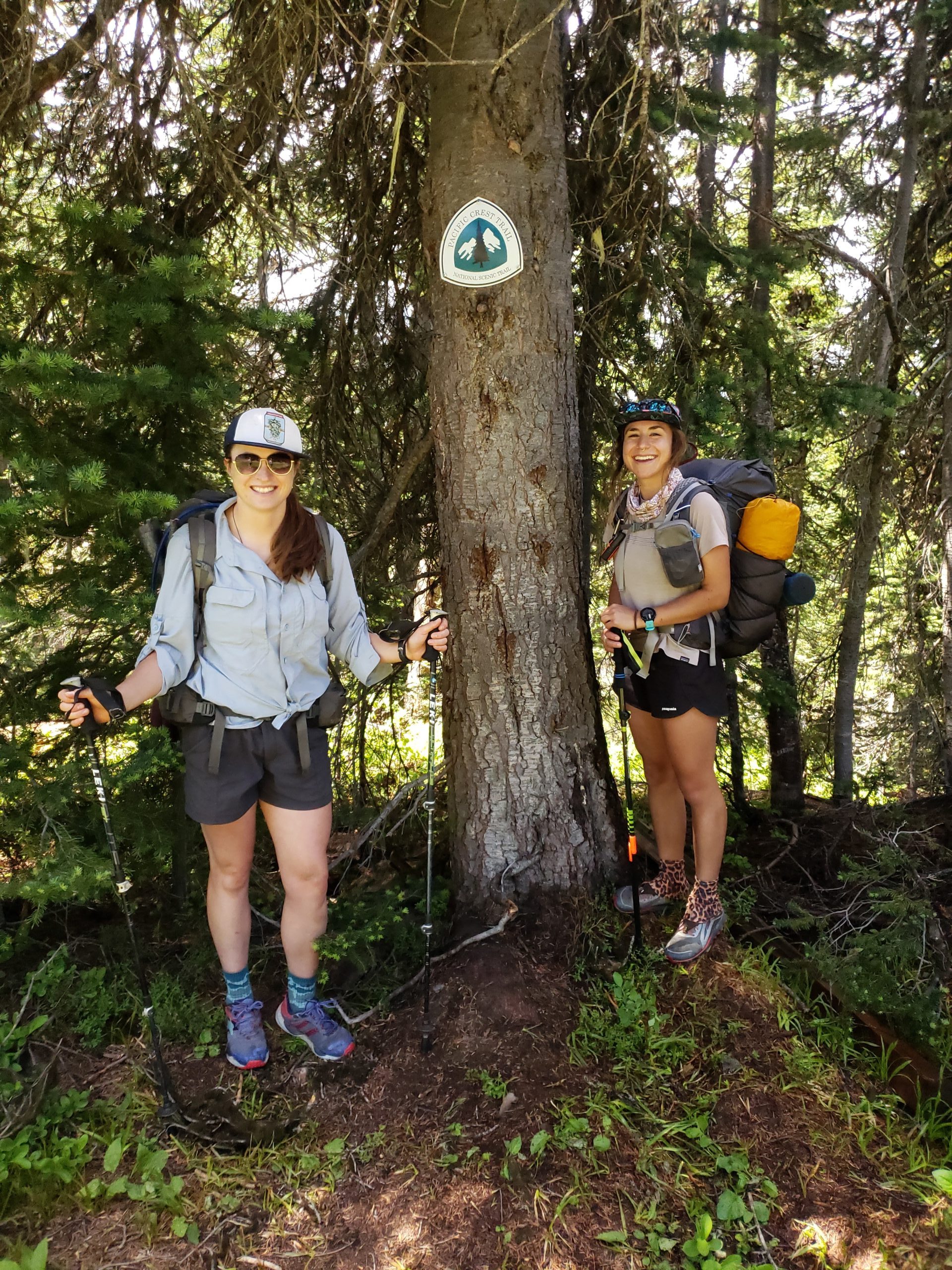 Upon waking from little cumulative sleep, I seemed more vegetable than animal.  No brainpower, but instinct and emotion remained.  Felt that if I just went with the flow, logical rudders abandoned, everything would be OK.  All I had to do was ride to the trailhead and begin walking; a mind would have been superfluous.

my feet know the way. 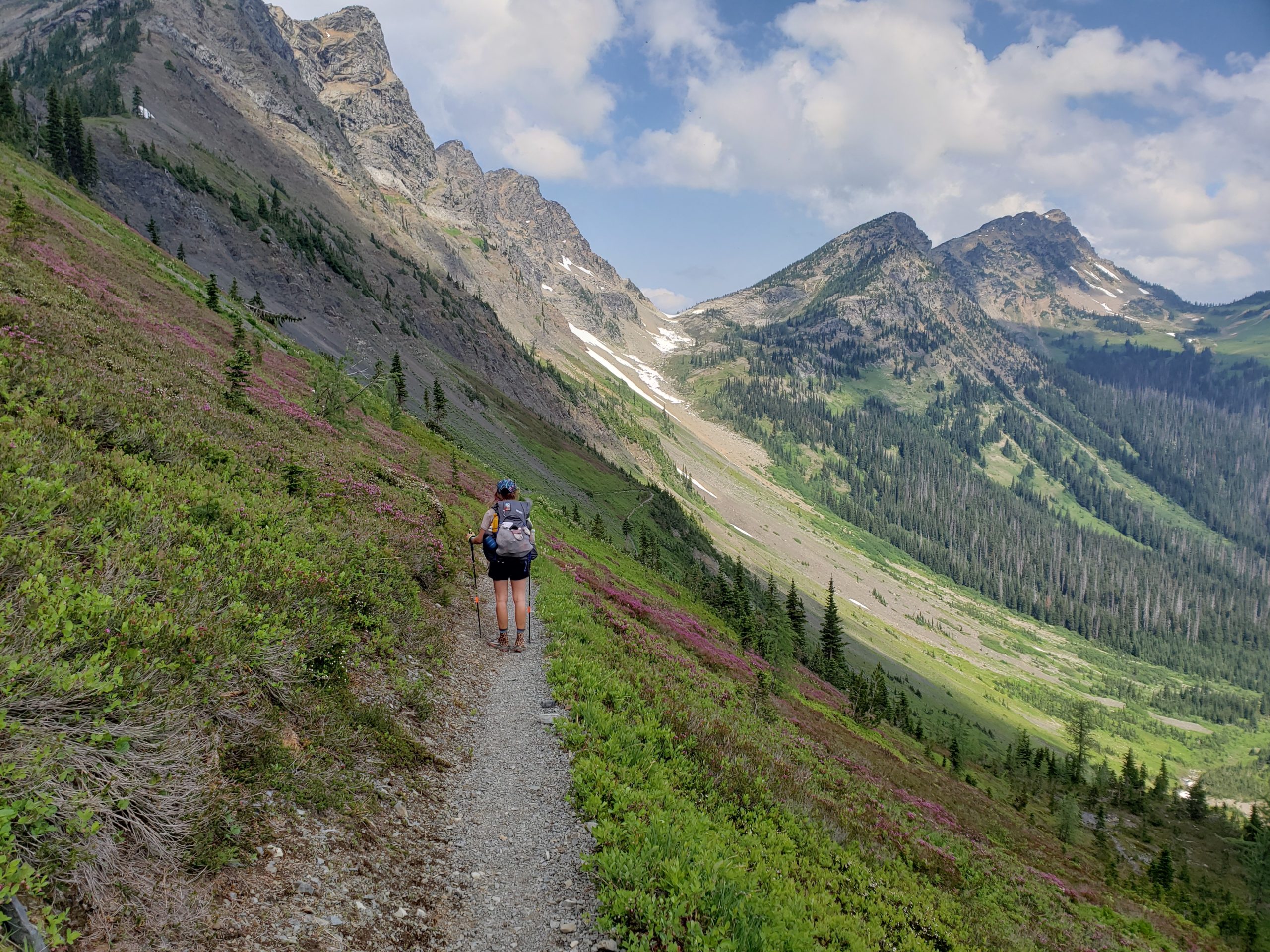 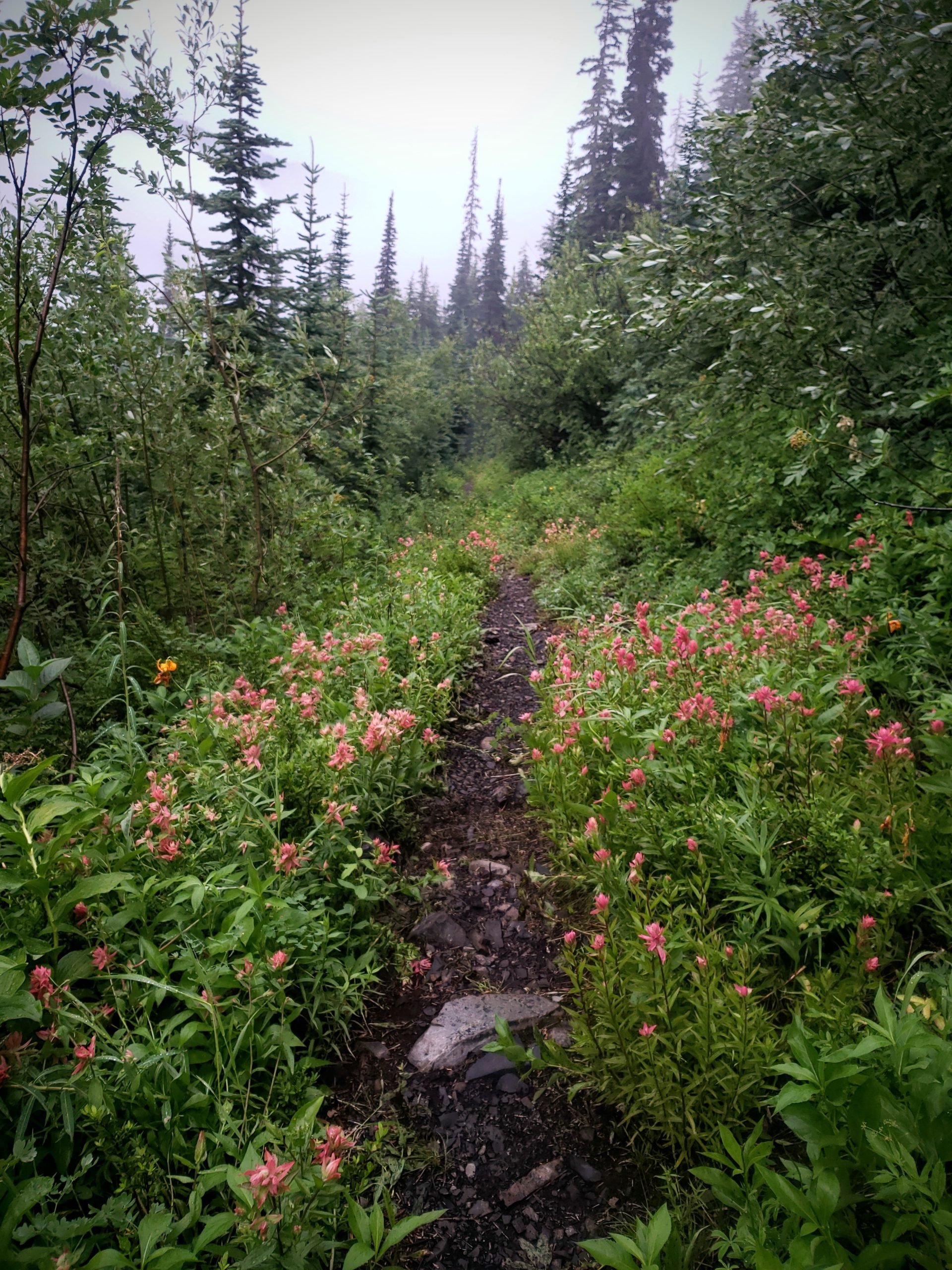 It started to rain & thunder in the afternoon, luckily after we had passed the last NoBo pass.  Some patches of vegetation smelled like honeydew melon, though I couldn’t pinpoint the source.

I thought about my dad and the short-form journal he kept while hitch-hiking this part of the country in the ’80s.  He sounds happiest when reminiscing about eating peaches in the back of a pickup truck & walking through the lunar landscape that was Washington post- Mt Saint Helens.

Had to set up my tent in the rain, but at least it wasn’t in a puddle like some adjacent tents.

pace. no need to sprint. 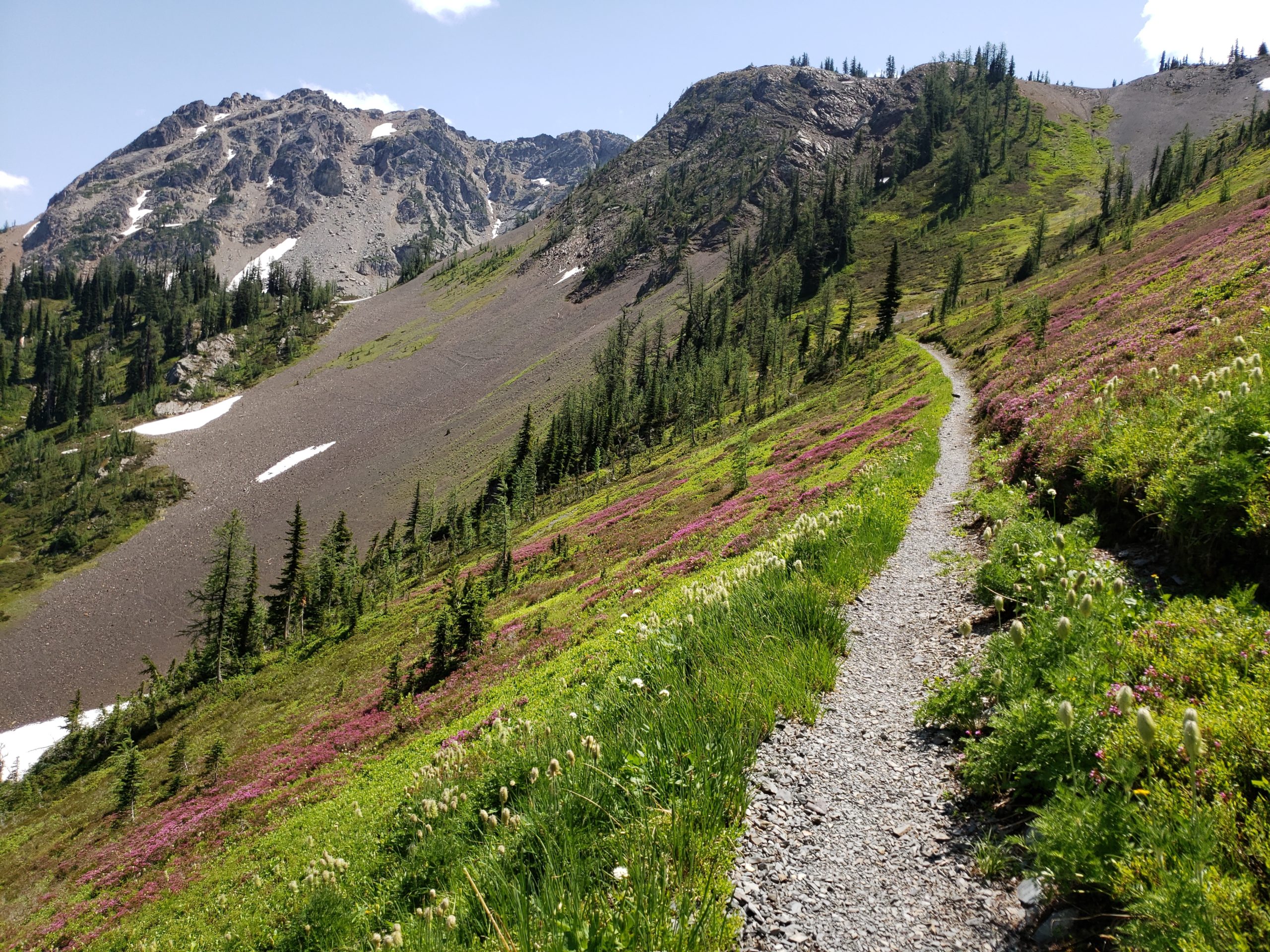 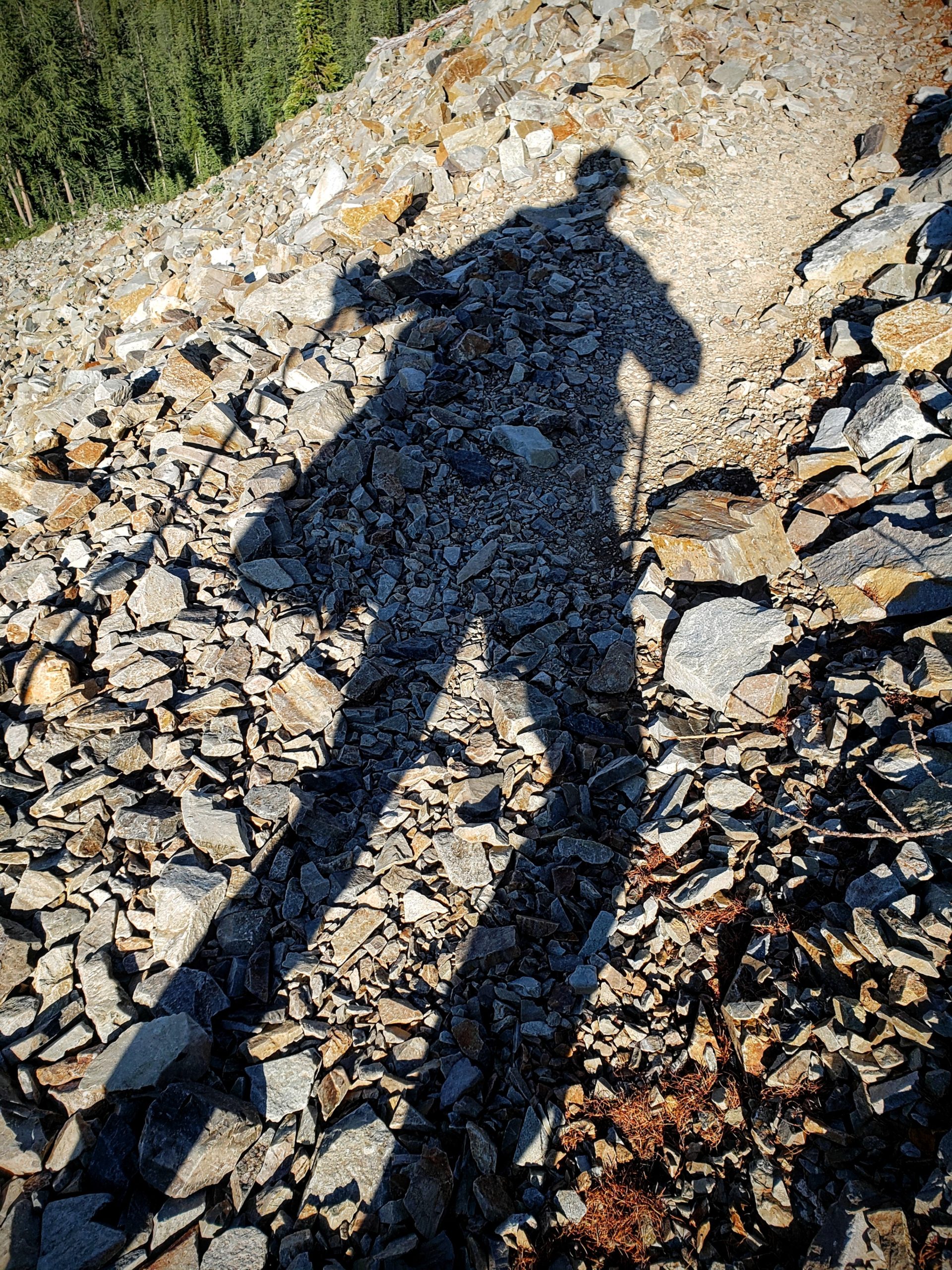 I don’t sleep well in the rain.  By the time I forced myself into packing, my sort-of-companion was long gone.  Rachel & I met at the gear shop where she worked and I was buying tent stakes.  We arrived on the same day and hiked together on days 1 & 2, but there was nothing tethering us to one another.  She had her stride dialed in after a 7th-place ultra finish; I did some stairs and brought along my thinnest-soled shoes.

I thought about how easy her first thru must feel as I wrestled with the familiar nuisances of chafing, sore feet, and the vague threat of early snow in the Sierras.  I wasn’t too upset though, as solo hiking has its advantages.  I was able to take photo/phone/food breaks whenever I felt like and focus on my practice my pole technique. 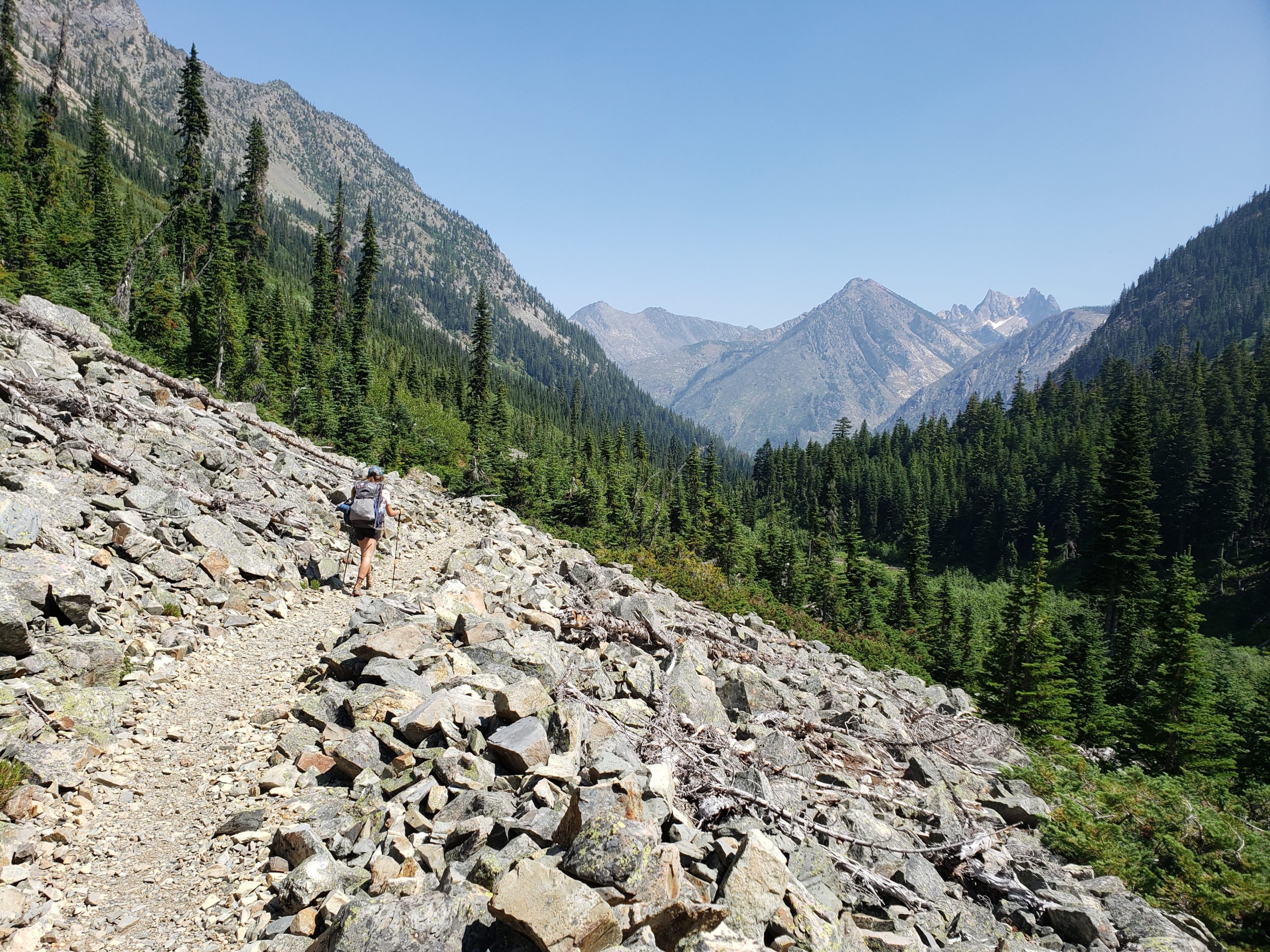 First, I should clarify that I did not put soiled clothes in the river.  That is not LNT.  Those biohazards, the result of too many beans + bad judgment, were safely contained & isolated while we splashed in the frigid stream.

I met Rachel again while picking up food & equipment (ice axe, microspikes) that I had deposited in the safekeeping box at the Hart’s Pass Ranger Station.  Despite the new load, the miles were easy until after Brush Creek.  The blowdowns were numerous and the climb apparently endless.  We talked about big and small things to pass the miles, like nut butter brands & the role gender performance plays in the perception of outdoor competence/incompetence 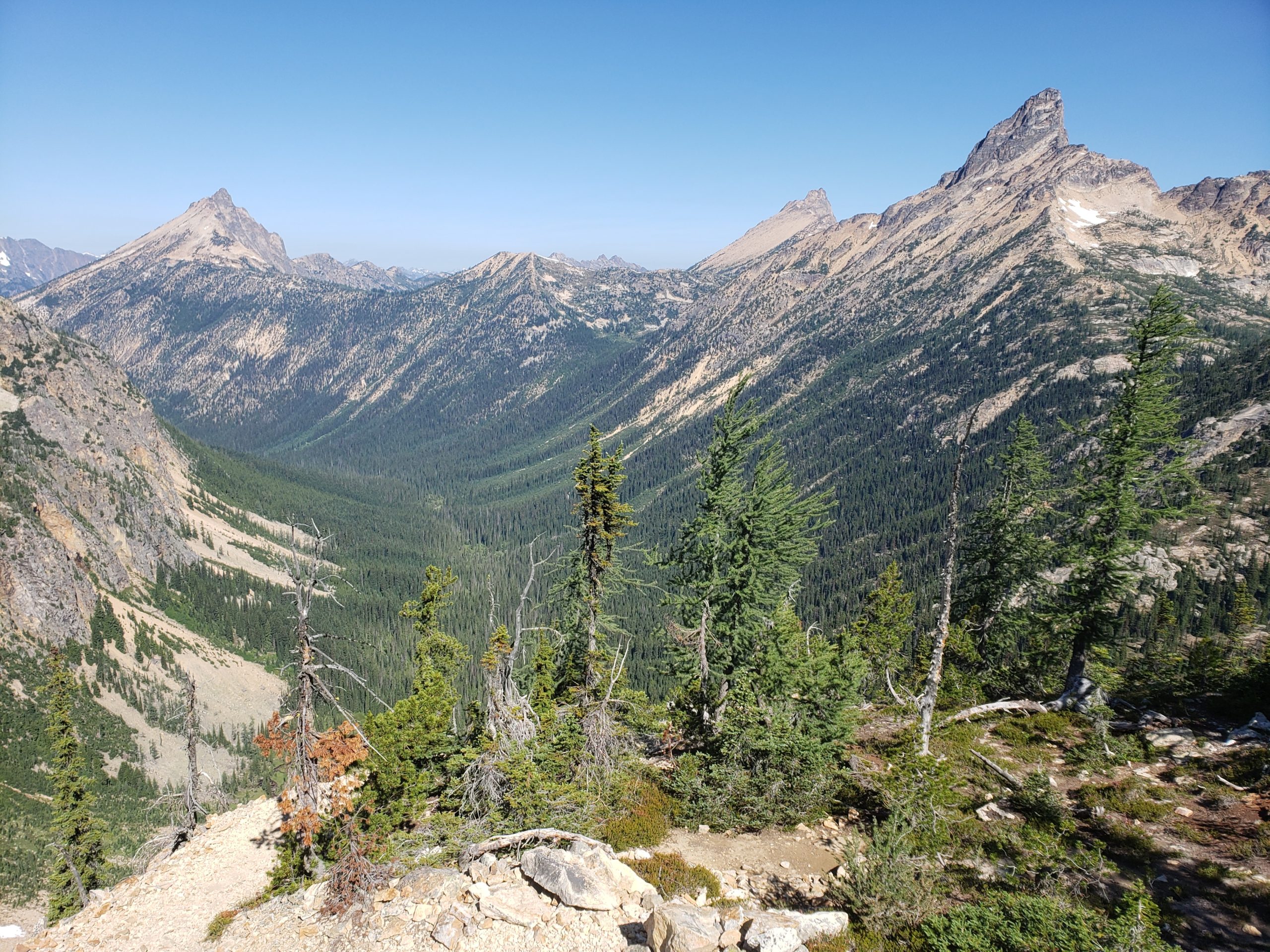 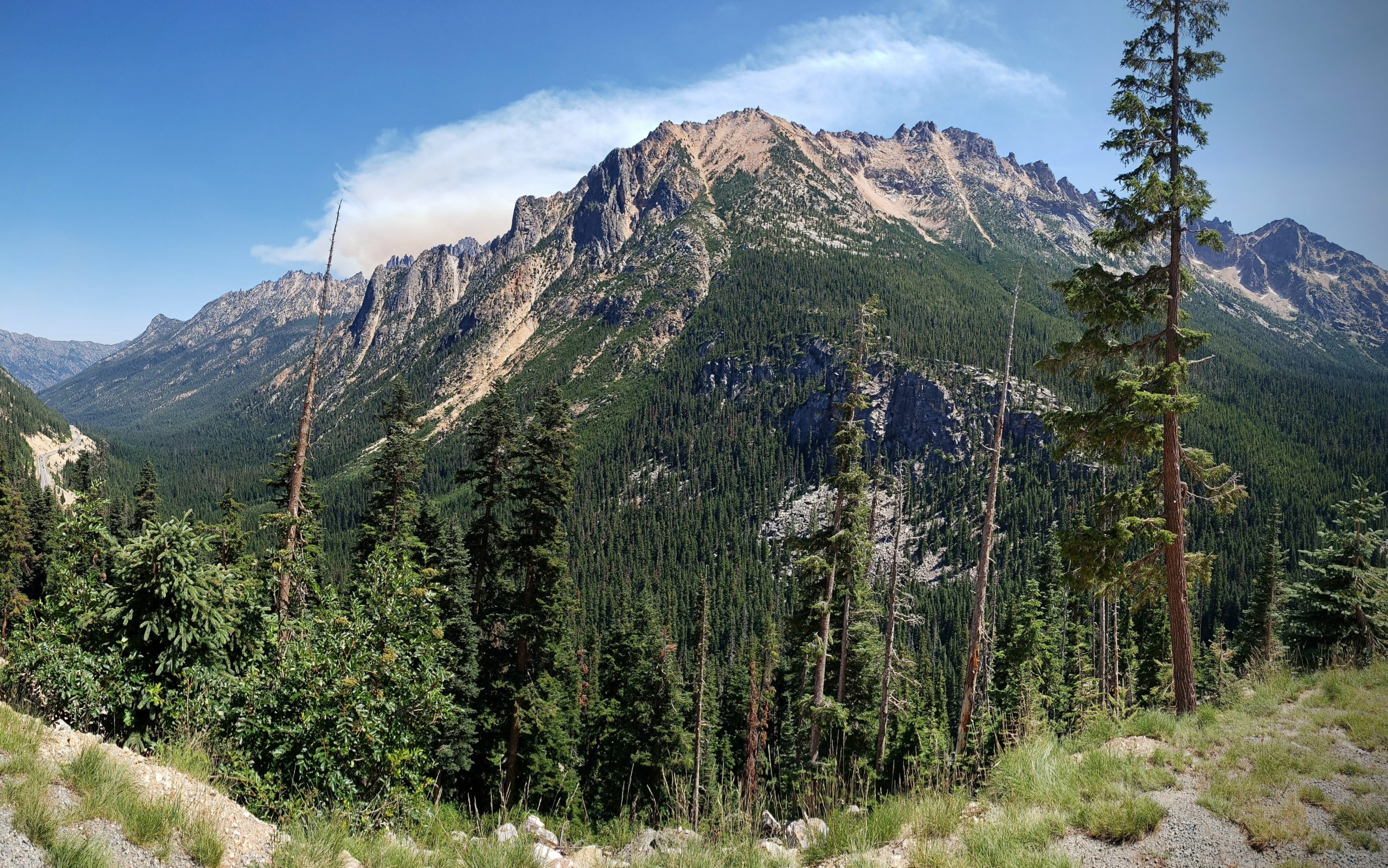 Today Mazama was on fire.  And I needed to get to Mazama.

I realized that I desperately needed new inserts and couldn’t limp the next 130+ miles to Leavenworth.  At Hwy 20 I caught a hitch with Brenda, whose son Ethan/”Iron Man” hiked NoBo in 2011.  We waited in stopped traffic, watching the fire crews cut brush, observing how the sunlight on the pavement was filtered red by the smoke.  Eventually she deposited me at the gear shop along with a ziplock of fresh-picked western Washington blueberries.  I grabbed some cork-foam arch supports & hot coffee, panicked by the imminent-sounding road closure.

A couple who “only pick up people with ice axes” (the signal of a true-thru hiker) gave me a ride through halting uphill traffic.  Vicky & Jeff were in the midst of frogging for recreation & science; Jeff was one of the college students that studied at Huxley and never left.

back at ground zero. 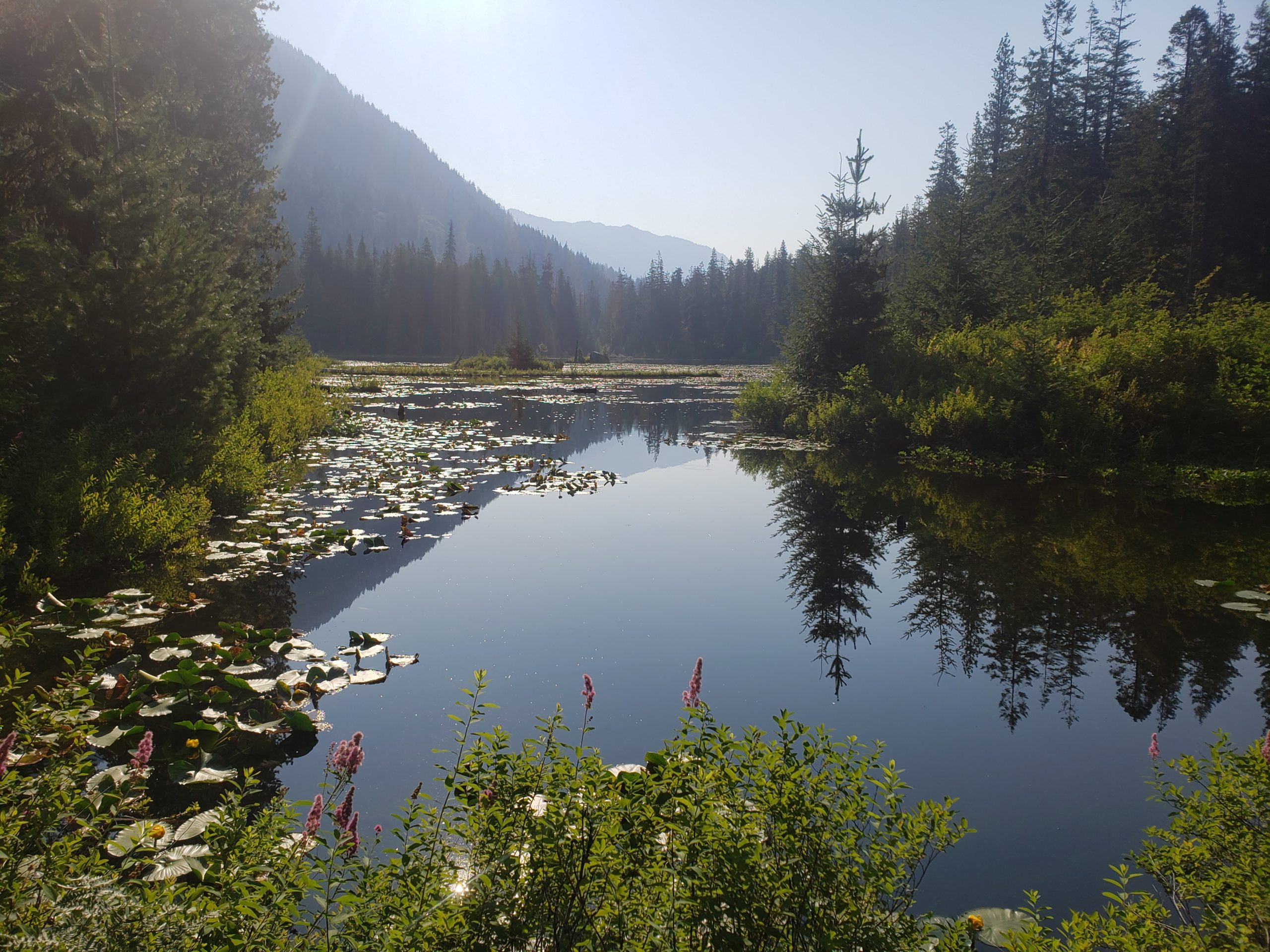 I’m pretty open about struggling with sleep issues.  I don’t often explain that it began with a bear.

In 2015 I was a caretaker on Camel’s Hump and sleeping alone in a tent for the first time.  At night, I’d imagine bears and coyotes behind every twig snap and leaf rustle.  I was getting better & faster at talking myself down from “bear-anoia,” until one time it really was a bear.  That stole my bear box.  And later broke into my tent.  And broke into the lodge.  And ate the trash it found there, then shat on the bottom bunk.  I began to have night anxiety, torn between the desire to stay vigilant and the knowledge that I needed sleep to function.

The resulting sleep-awareness,-deprivation, and -obsession have tainted my life ever since, hovering around the edges, waiting to pounce.

Stehekin was a neat ferry-serviced tourist town, but it was hard to enjoy & do chores under the stifling cloud of sleepiness.

Pain dulled by podcasts, live in 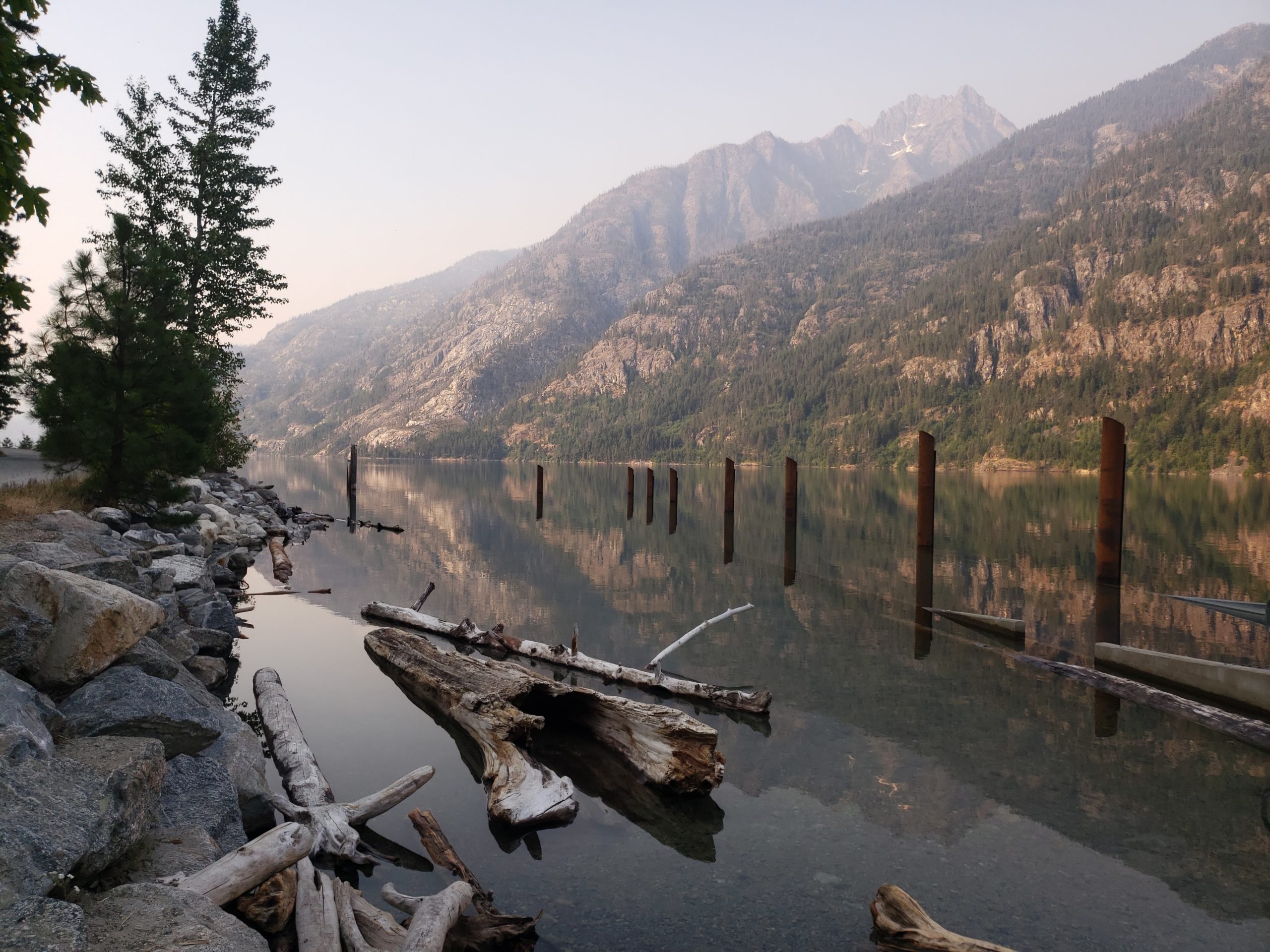 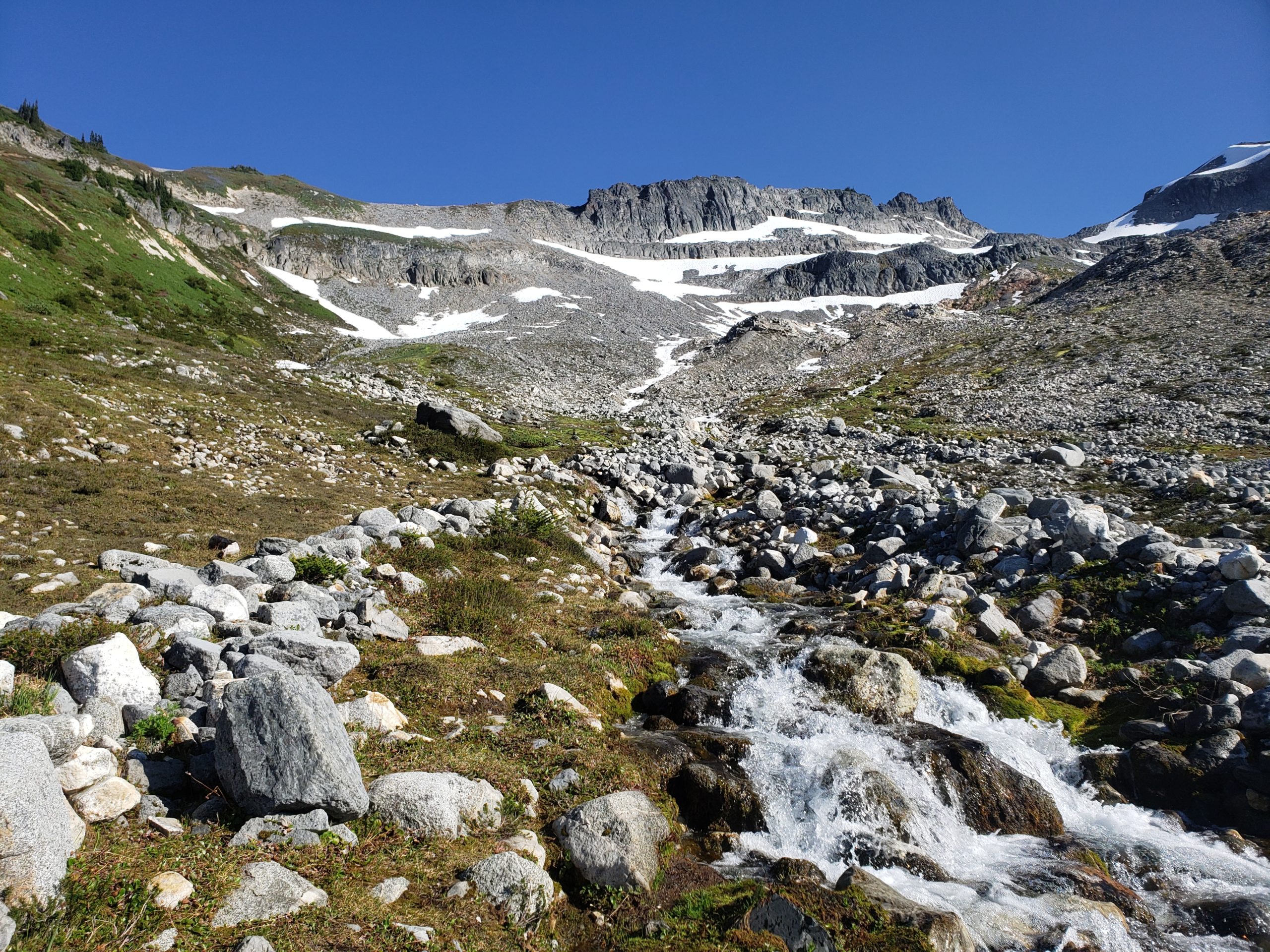 Today marked the first media indulgence of the trip.  To make the miles & my aching feet & my weary head seem distant, I popped in some earbuds for the afternoon.  I tried to ignore the hordes of flies, which have replaced mosquitoes for the moment, with questions like “is numeracy an innate or learned concept?” and historical tidbits like that time when PepsiCo had the world’s 6th-largest submarine navy.

The question of media in the wilderness is a controversial one.  Some believe that if your intent is to be in the woods, you should “be” in the woods as mentally as you are physically.  Others argue that music can enhance the hiking mood and that edifying podcasts can alter your perspective.

I’m a bit in both worlds, which means that I occasionally tune out, but feel guilty about it.

Crossed some flat snow patches and caught some glimpses of Glacier Peak.