Each year, The Trek signs up over 100 prospective thru-hikers to tell their story to our audience. Needless to say, some of our hikers fall off the face of the blogging planet, and some fall off the face of the trail. Hey, blogging from the woods is hard, and thru-hiking might be even harder. So for the second year in a row, we are bringing you a compilation wrap-up from some of our brave 2016 bloggers. Here’s a sampling of who summited, who’s hike turned into a LASH, and who is still out there (?!).

Erin Briggeman (Xena): Erin started her hike in Georgia on April 23, and summited Katahdin on October 21. Her thru turned into a LASH thanks to two missed sections (the first due to a serious case of tendinitis in her left shoulder and the second due to a broken ankle), so she has roughly 600 miles unfinished, and has plans to attempt a second thru in 2018 or 2019. Since finishing her hike she has gone back to work full time at a college in the Berkshires, and is also working on writing and illustrating a children’s book. At night, she still dreams that she is on the trail.

Ashley Paulli (Violet): “My husband (Chris, trail name Hops) and I are still doing our 2016 flip-flop thru-hike. We started in Georgia on March 14th, pi day! It was originally planned to be a NOBO, but with taking time off here and there, and my hiking pace, it turned into a flip-flop and is going to take us probably a full year! We’ve been out here for 10 months. We have 450 miles left! We have every intention on completing this. We’ll be completing our thru-hike at Reed’s Gap and celebrating at Devil’s Backbone!”

Eva Briggs (Whisper): “I started March 13 northbound from Springer Mountain. I hiked until the end of June reaching just shy of Lehigh gap in Pennsylvania. I had to stop because of a stress fracture in my foot. I took 10 weeks off and then hiked for another 10 days, reaching Warwick New York. I’m hoping to finish the remaining 808 miles in 2017 starting in May.”

Sara Ecay (Weird Horse): “Day one of my thru hike did not go as planned. I started my NOBO thru-hike at Amicalola Falls State Park on March 5th and instead of taking the infamous stairs up alongside the falls (the entire reason I decided to do the Approach Trail) I somehow ended up on the “Old Approach Trail” and bypassed the first mile of the Approach Trail and the falls completely. While it seemed like a bad start, the next 5 months couldn’t have gone more smoothly. I had no major injuries, the weather was nearly perfect (except for the 26 days of rain in May), I met all kinds of wonderful people, and I made my dream come true. I walked every inch of the 2,189.1 miles of the Appalachian Trail and summited Katahdin solo at dawn on August 5th. I shared the first almost 400 mi of my trek with my dog Jetta, and later nearly 200 mi (including the 100 mi wilderness) with my dad, and both of them had the time of their lives. My husband and I are now preparing for the next adventure which will be the arrival of baby #1 in July. I am not done with the trail yet and will be returning to AFSP in March to hike up the steps and bid good luck to some of the 2017 hopefuls, and someday will thru hike the PCT as well.” 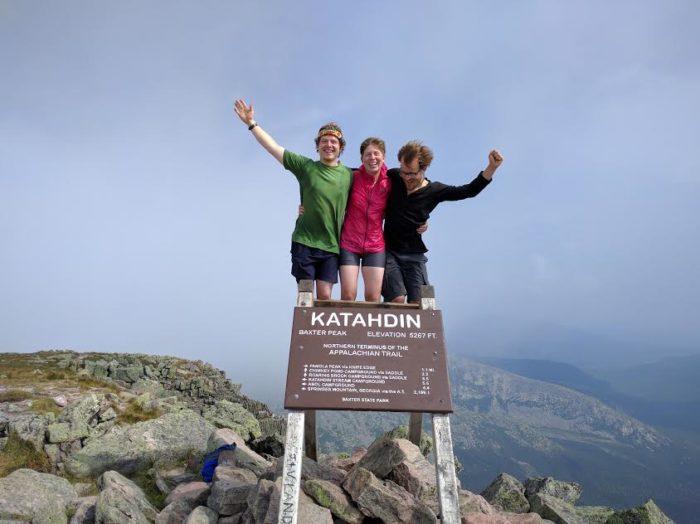 Victoria Ketteringham (Stan): “My thru hike turned into a LASH. I hiked from Springer to Damascus in 6 weeks, and realized that I really don’t like hiking. I missed sleeping in a bed, cooking in a kitchen, and pooping in a toilet. Since I stopped, I have been intentional about keeping all of my favourite things about the journey (community, exercise, and purposeful routine) in my life.”

Vinny Tagliatela (Slice): Vinny started on April 3rd at Springer Mountain and finished September 24th at Katahdin. He hiked almost all of the trail with another hiker named Reindeer that he met on night two at Gooch Mountain shelter. The hike was everything he could have ever wanted, and left him emotionally and physically exhausted. He continues to battle knee and ankle injuries months after getting off the trail. Despite the injuries, he wouldn’t have changed anything about his 6 month adventure. He is now settling back into Chicago, working in a cubicle and wearing business casual, just like before the AT. He no longer has a beard and everyone is much happier because of it. 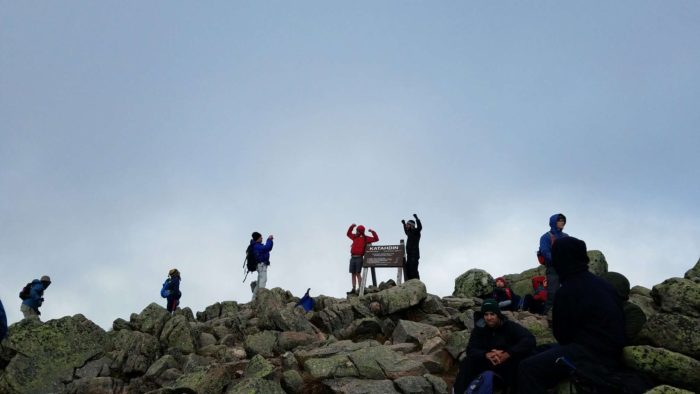 Gina De Naples (Bandit): “I slipped on ice in the Smokies (at mile 207, to be precise). I hiked over five hundred miles on what turned out to be a severely sprained-to-fractured ankle. When the pain finally got to be too much, my NOBO attempt turned into a 700 mile LASH. I’ll be back in 2017 to complete my thru hike!”

George Turner (Old Growth): “I started my planned flip-flop in Marion, Virginia on March 21. When I got to Harpers Ferry, I came home to visit the wife and dogs, slipped on the stairs and tore my rotator cuff. After surgery and four months of rehab, I went back to Marion and hiked to Springer pretty much as I had originally planned it. I can’t wait to go back to Harpers Ferry in the spring to head north to Katahdin. I want to finish the AT so I can start on the PCT in 2018.” 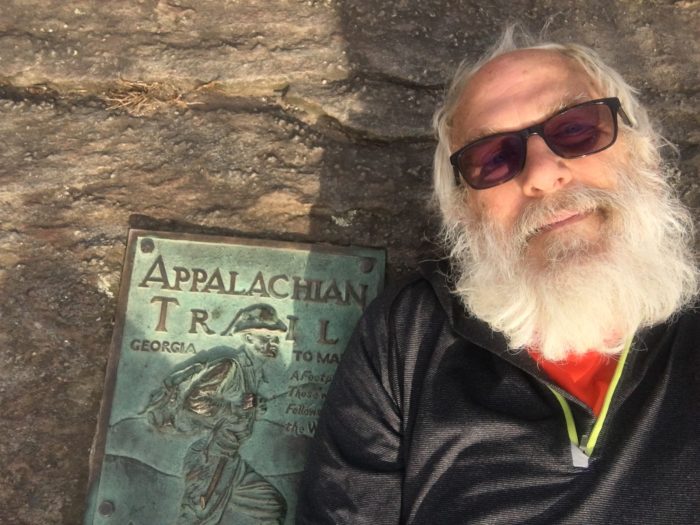 Katie Brown (Wilderness): “In 2016, I hiked the Continental Divide Trail, going northbound from Mexico to Canada. I had one expectation of my CDT thru-hike, and it was that it was going to be hard–quite possibly the hardest thing I’d ever done to that point. The CDT exceeded every aspect of that expectation, and more. I don’t mean that the CDT was just a massive sufferfest—it’s definitely wasn’t. What I mean was that the CDT stretched me in directions that I never thought I’d stretch, and made me come into a part of myself I didn’t know was there. It was the loveliest time I’ve ever had in the wilderness, passing through a tremendously varied landscape, that is the Continental Divide, on a daily basis. I walked through parts of the country that I’d been musing for years to explore, such as the Colorado Rockies, Wind Rivers, and Glacier National Park. I met wonderful people on and off trail. And as long trails usually do, the CDT has been added to the list of continuously inspiring experiences that keep me walking.” 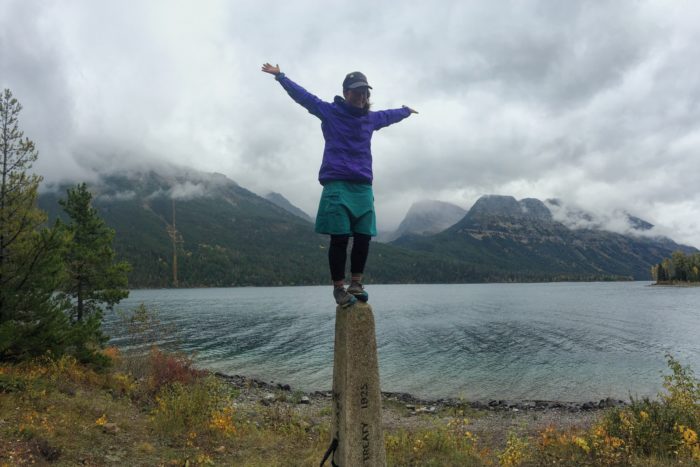 Colleen Goldhorn (NoNa): “The story of my hike ended up being the most confusing story ever. Long story short, my NOBO hike turned into a flip-flop. After hiking from Springer to Hot Springs, NC I flipped up to Harper’s Ferry. The plan was to hike from Harper’s Ferry to Katahdin, then from Harper’s Ferry back down to Hot Springs. Unfortunately, towards the end of PA I started getting really intense vertigo and nausea. Turns out I had some weird inner ear issues going on that took a little while to get under control, and ended up forcing me off the trail. Since coming home, I have accepted a full time graphic design position and have been getting outside as much as possible. I have vowed to not give up on the AT and have become an avid section hiker. Weekends are now spent checking off new parts of the trail – hoping to have Jersey done by mid February and NY done by mid July. I am also planning a roughly 100 mile AT section hike for sometime this summer. The adventure continues!”

Mischa Egolf (Tripwire): “I started at Amicolola Falls on March 8th with my partner, Limbo, and we finished together at Katahdin on July 26th! We made it through 21 straight days of precipitation in Virginia and many gear snafus, but also had some amazing moments- we had McAfee Knob all to ourselves! We’re back home in Oregon and enjoying the comforts of indoor plumbing and other conveniences while deciding what our next big adventure will be.” 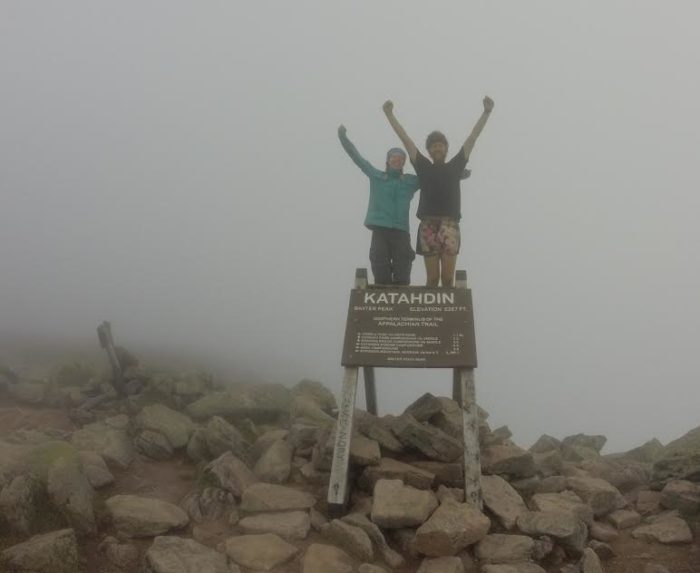 Shauna Sergent (Mountain Lady): “I started my NOBO AT hike on March 29th and summited Mount Katahdin on August 26th. Although I started my hike alone, I was fortunate enough to be joined by friends and family members at certain parts on the trail, in addition to having trail families along the way. I wasn’t sure if I would make it to the end after a few mice attacks and gear issues in the beginning, but I feel blessed to have made it to the end. The trail has made me a better person and I still look forward to returning to the woods every chance I get. Since hiking the AT, I have continued my travels around the world, including hiking around Vancouver and Japan.” 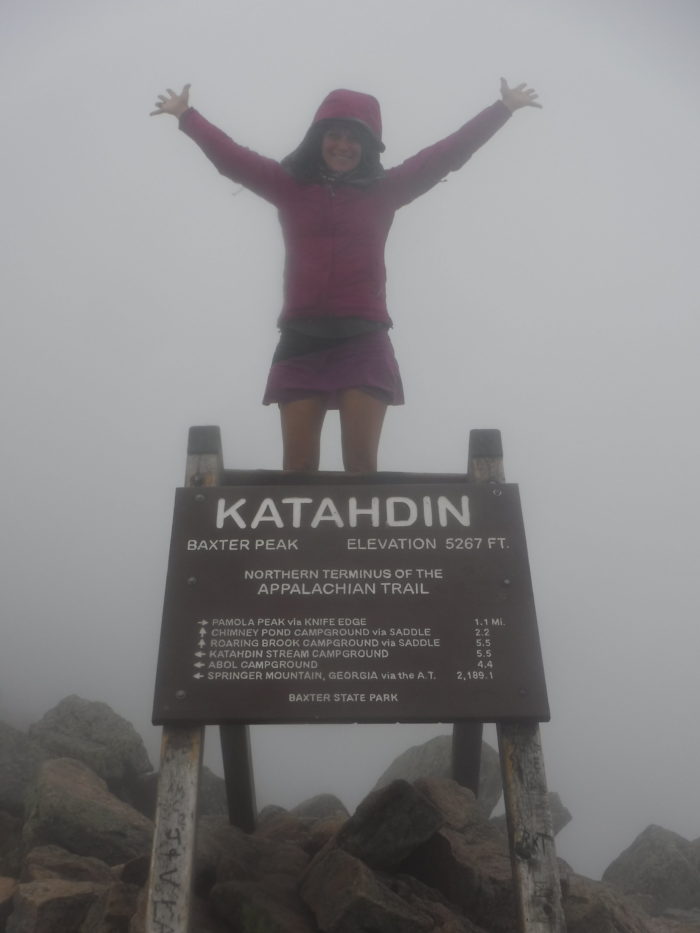 Taylor Ciambra (Breeze):  Taylor started her NOBO hike in March with her friend, Mamie “Xtra-Tuff” Clare. Her thru hike turned into a LASH and she finished at Harper’s Ferry in July. “I got the flu halfway through the Smokies to everyone’s surprise, but I had no major injuries besides some awful blisters early on. By the time I reached Harper’s Ferry, I realized it was time to face my next adventure, making a career as a writer and theatre artist. Since coming home, I’ve been freelance writing, mostly about backpacking, and have gotten some of my poetry published. This spring I’m looking forward to taking a full-time job in theatre.

Crystal Gail Welcome (The Giver): “During my thru hike, I learned a lot about myself. I became self reliant and gained a lot of insight. The hike did not go as planned. There were many unexpected detours both metaphorically and literally. At one point I ended up taking a 20-mile detour because of endangered frogs. I witnessed a baby goat being born just a few hundred feet from an ostrich farm. I hiked on water (aqueduct), in the middle of the night, through a snow storm, hail storm. For the first time ever, I slept tentless under the stars during a meteor shower. I didn’t complete my thru hike. I hiked 600 miles on the PCT, covering the entire southern section. I live with a neurological implant and suffer from chronic headaches. As my journey continued it became apparent that the miles were taking a toll on me. My intracranial pressure raised and I started experiencing vertigo. As the altitude increased and decreased in conjunction with the sporadic change in weather resulted in unsafe physical circumstances that ultimately caused me to cease my hike. Though it hasn’t been confirmed my upcoming surgery may be a direct result of carrying my pack for the many miles. Overall, the hike was one of the most enlightening things I’ve experienced.” 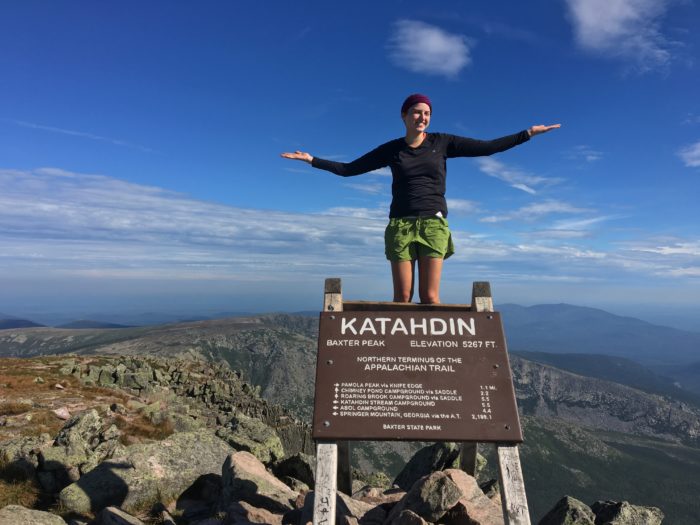