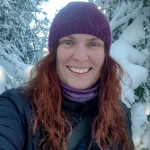 Why Did My Thru-Hike Fail?

Victory awaits him who has everything in order — luck, people call it.
Defeat is certain for him who has neglected to take the necessary
precautions in time; this is called bad luck.

Roald Amundsen won a frantic race to be the first man to reach the South Pole in 1911. His meticulous planning and preparations is often credited as the reason he won the race.

I had just taken a break from writing this blog post about why my first thru-hiking attempt failed when I came across this quote, and all of a sudden it dawned on me: It wasn’t the bad weather or bad luck that I blamed so far that made me fail my thru-hike. It was poor preparations.

Last summer it was finally going to happen. After years of hiking vicariously through a multitude of YouTube thru-hiking videos, blogs, and podcasts I was able to take the necessary two months off work and real life to go hike the wildest and most rugged and remote of the US national scenic trails—The Pacific Northwest Trail (PNT).  To say I was excited would be an understatement.

I was giddy with joy when I stepped in between the trees from the parking lot that marks the Eastern Terminus at Chief Mountain. Those steps meant that I was actually doing it. After years of dreaming about it I was finally thru-hiking. 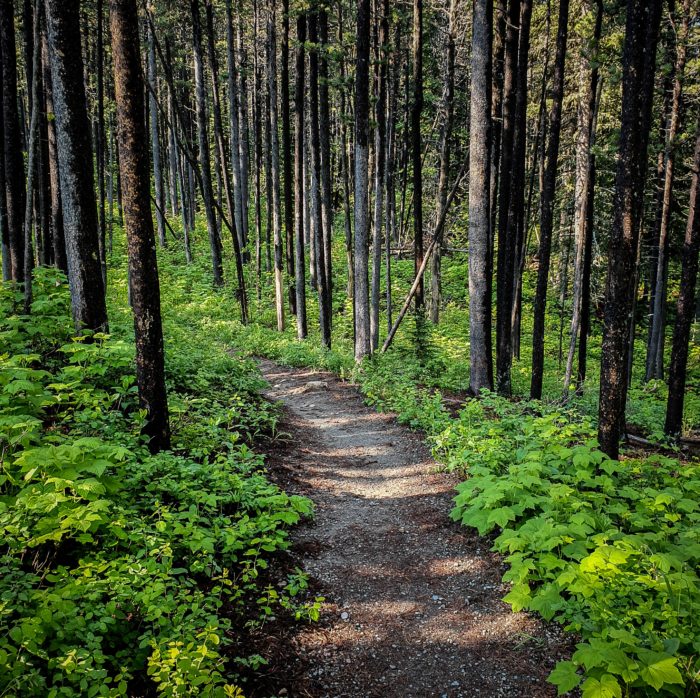 First steps on the PNT.

The excitement lasted for ten days. That night I discovered a tear in my sleeping pad when I was setting up camp. Realizing that I would spend the night trying to sleep on the cold, hard ground I had my first breakdown. Nobody was around to hear me cry, and even if they were, they wouldn’t have heard anything over the storm that raged outside. After that night I was quickly drawn into a downward spiral of negative thoughts and it didn’t take long before every single incident, no matter how small, would trigger a mental flow of general terribleness. 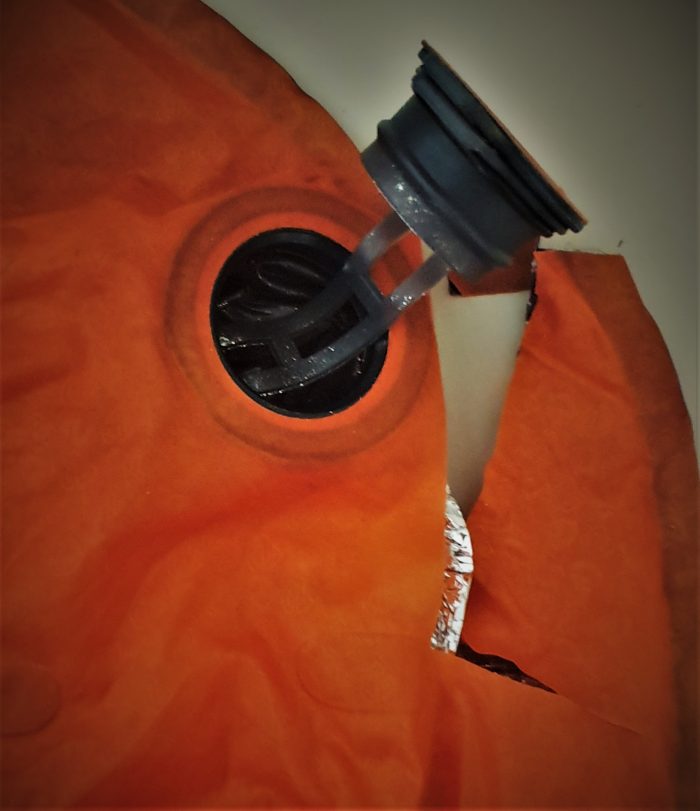 By day 12 my mantra had become, “This isn’t worth it.” I obviously should have gotten off the trail right then and taken a break until my mind was back on the right track, but I didn’t. The pressure of having limited time to complete the hike kept looming overhead, and so I pushed myself to keep going. There simply was no time for a break.  Then one sunny afternoon 17 days after setting out from Chief Mountain I spotted rain clouds on the horizon. And something snapped inside of me. Suddenly I was overwhelmed by an uncontrollable urge to quit.

By the time I started regretting getting off I was already in another state. And by the time I could think of nothing else than continuing too much time had passed of my limited two-month window. 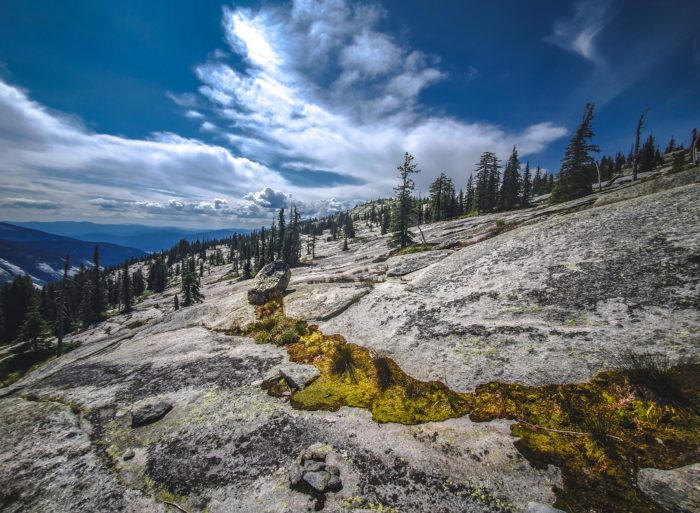 Here, and no farther. I got off shortly after this picture was taken.

In the first drafts of this blog post I had written down several paragraphs about “bad luck” and “combination of circumstances” when trying to describe what went wrong last summer. But it really comes down to that I didn’t prepare well enough. So rather than making an elaborate list of excuses for why my thru-hiking attempt failed, I’m going to look at some of the (many) ways in which I failed to properly prepare.

No Plan for Daily Rain

It rained 15 of the 17 days I was on the trail. The rain wasn’t constant; some days were wonderfully sunny, and a couple were almost too warm and dry. But every day the evening showers would roll in, and more often than not they would turn into a storm that lasted throughout the night. Which meant that my gear was pretty much always a soggy, wet mess when I packed camp in the morning. Some days I could dry it out during lunch, but it would inevitably get wet again as soon as the evening showers rolled in.

In the years I spent researching thru-hiking, and preparing for my first thru-hiking attempt, the possibility that it might actually rain (a lot) every single day hadn’t even crossed my mind. Somehow I forgot to prepare for long-lasting shitty weather. In my mind rain and wet conditions would only be short-term, a few days at worst. So when it turned out to be a daily occurrence, I had no plan for how to handle it.

Not Dialing in the Gear

I got lucky and received an ambassadorship, which came with a lot of gear. However, that meant that I would receive a lot of the gear just a few days before setting out, leaving me with no time to properly test it. Please don’t do this. The gear might turn out fine, but you might also end up very uncomfortable, cold, and miserable.

It became painfully obvious already on the first night that some key items just didn’t fit. My tent was too small, and whenever I sat up or moved around I would inevitably touch the inside of the tent walls. Since the tent walls were wet from rain and air humidity most of the time, the sides of my sleeping bag got wet or humid most of the time, which meant it stopped insulating properly.  I also hadn’t tested my sleeping bag before setting out. It was supposed to fit people up to 183 cm (6 feet), but it certainly didn’t fit me at 176 cm (5 feet, 8′ inches). Either my head or my feet would always press against the sleeping bag hood or footbox, robbing that part of any warmth.

I run extremely cold, and sleep even colder (ironic considering I’m from a country where winter lasts most of the year), so I am pretty desperate for warm and heat-efficient gear. But because I hadn’t tested the most important parts of the gear before setting out, I ended up being cold from most ends most nights. It was a very unpleasant lesson to learn, and I will certainly never set out on a hike again without thoroughly knowing every item in my backpack and that it fits and works in all conditions. 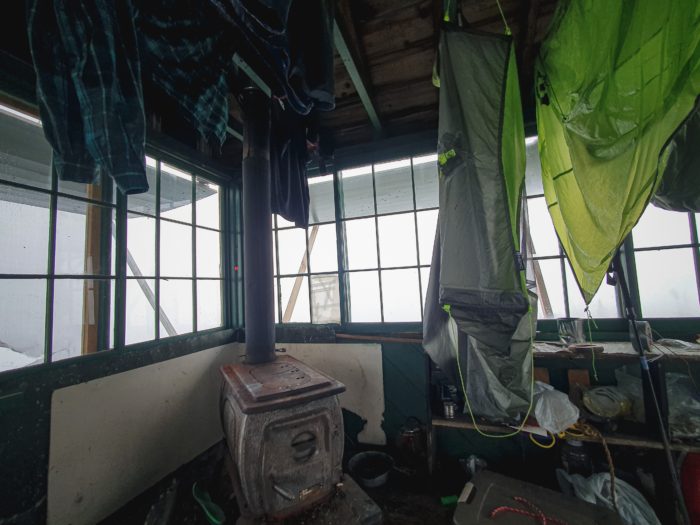 Possibly the best evening on the trail. Safe from the rain outside, drying out gear in the Mount Wam Lookout

Like a lot of people, I tend to lose my appetite when I start a hike. While on the PNT I probably ate about half of what I should have been eating. Not getting enough energy certainly lowered my already low resilience to being wet, cold, and tired, another mistake that could have been easily avoided if I had prepared a good strategy to cope with the loss of appetite before setting out. 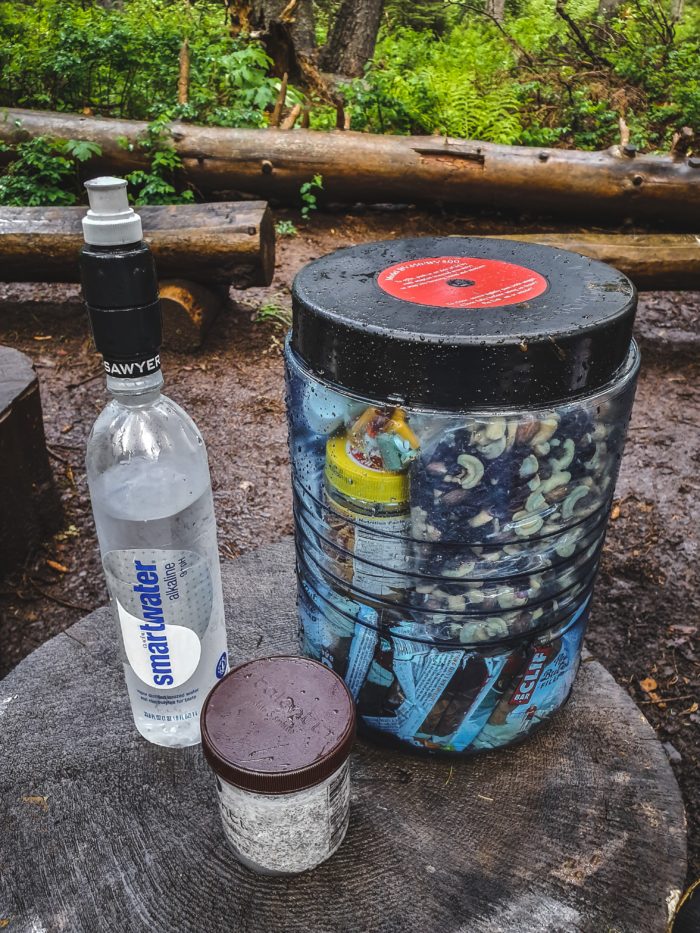 The nine days of food I had when starting out lasted well over two weeks.

My expectations of the trail conditions were waaayyyy off. Any guidebook will warn you that the PNT often runs along overgrown trails, one of several characteristics that earns it the reputation for being the wildest of the national scenic trails.  I knew this, yet I was completely unprepared for it. And so the miles trashing through soaking wet, waist- and shoulder-high vegetation that seemed hellbent on closing the gap made by the trail took me completely by surprise. 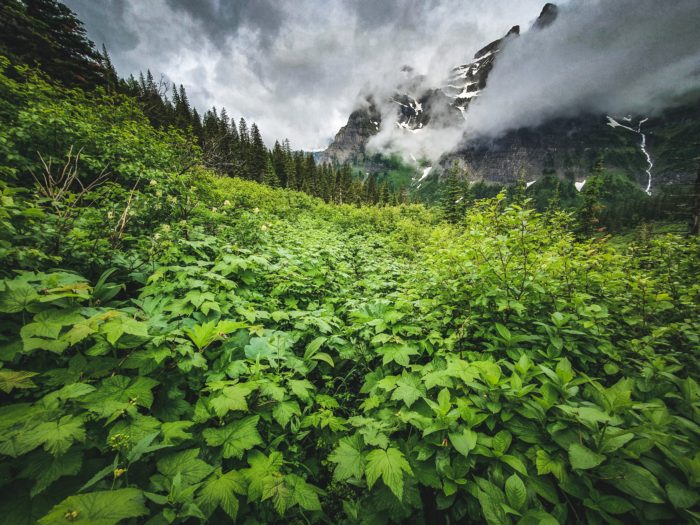 There’s a trail there.

I also knew there would be a lot of roadwalking on the PNT. However, somehow I failed to realize that road miles meant little or no views. In hindsight this is obvious.  But while I was out on the trail I kept getting disappointed. I simply had completely unrealistic expectations of the natural marvels that would surround me every step of the way. 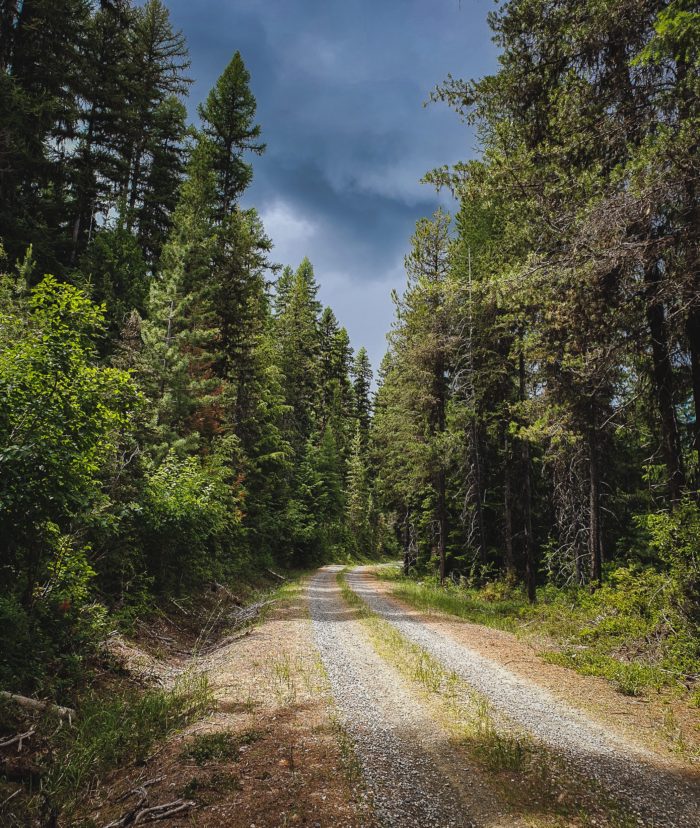 About one-third of the PNT is road walking.

This one baffles me. I’m an introvert, and solitude is a pretty profound part of my life. I sleep outside over 50 nights a year, most of them alone or with my dog. When my friends are planning getaways and weekend trips I find myself looking for excuses not to go. So spending two months alone in the wilderness sounded like a dream.

But in hindsight I think that I might have stayed on the trail if I had hiked with someone. Having someone to talk to and share frustrations with would probably have been a game-changer all those afternoons the world was covered in rain clouds and everything seemed bleak, and it would have made all the difference. But since I had decided to hike solo I only had myself to share frustrations with, and it turns out I’m a really shitty listener. 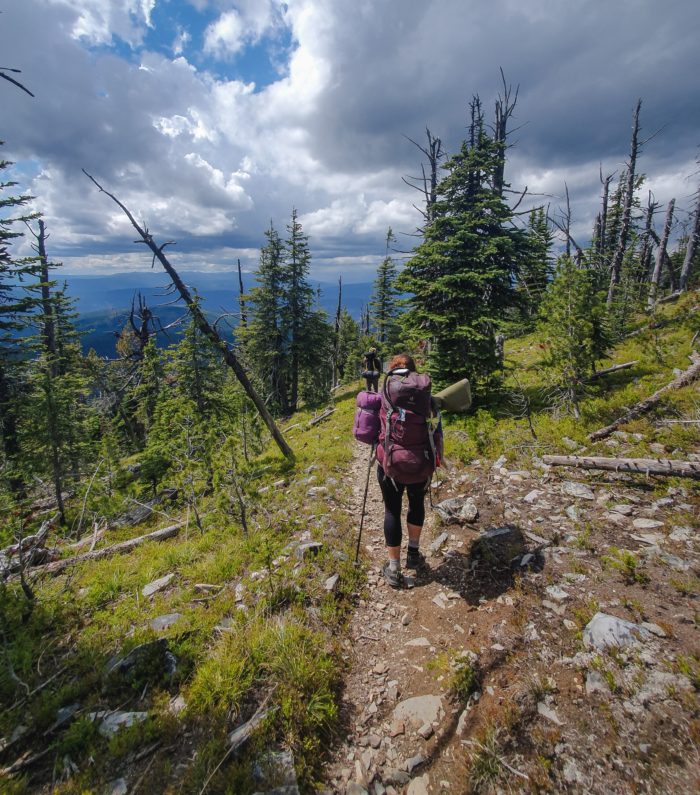 Who knew hiking with others is kinda great?

I had taken two months off work and real life to hike the PNT. Completing the PNT takes 60 to 70 days for most hikers. It meant I wasn’t in a hurry, but there wasn’t much room for idling either. In hindsight I dealt extremely poorly with the self-imposed pressure of having a tight deadline, telling myself that I didn’t have time for those extra zeros to dry out gear and let blisters heal—or take the necessary break when the smallest thing was enough to send me over the edge.

I’m lucky enough to have a job that I love, and that will stretch far to accommodate my wishes for time off, but they do need me to actually work the majority of the time. So until I win the lottery my hikes will always have a set deadline that I have to finish by. I hope, and think, that last summer taught me some important lessons about how to handle this a lot better in the future.

A few weeks after getting off the PNT I found myself back on it, hiking the 13 miles that it shares with the PCT through the Pasayten Wilderness. It was an ambiguous experience. On one hand it reminded me that I hadn’t been able to complete the PNT, on the other it brought back the familiar, giddy excitement to be on the trail.  Those 13 miles were easily the best part of the summer.

It took longer than I care to admit to come to terms with that I couldn’t complete the PNT. And frankly, realizing that my inability to complete the PNT came down to a lack of preparations has been a relief. Poor preparations can be improved and fixed, and that is great news. I’m never going to visit any Poles, or do anything extraordinary to the world. But I will continue to follow my own dreams, and in time find my own South Pole. 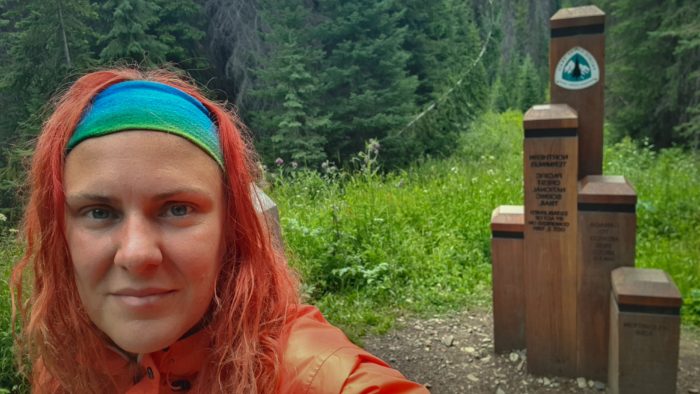 The PNT joins the PCT just south of the Northern Terminus of the PCT. Being so close I really had no choice but to visit the monument.

With love from a future thru-hiker,

Hi! I’m Marte. I spend most of my free time lurking around in the Norwegian forests and mountains, and when I’m not outdoors I work as a conservation biologist. I like making lists, I’m a keen photographer, and I’m far too lazy to cook on the trail. I attempted the PNT in 2019. In 2020 I will hike the Arctic Circle Trail (Greenland), and Kungsleden (Sweden), and spend the rest of summer hikertrashing around in the Norwegian mountains.