Wild is a story about a woman trying to learn how to live her life.

It is not a story about the Pacific Crest Trail or hiking – and to its credit, it doesn’t try to be.  Hiking is the vehicle for this story of personal loss, struggle, and redemption, but it is not the driver.  And there is a good reason for that.

Because walking is boring.

Even in ‘The Way’, where camaraderie and a personal story of loss were the main focus of the movie, I eventually got tired of watching Martin Sheen walk while the Shins played. 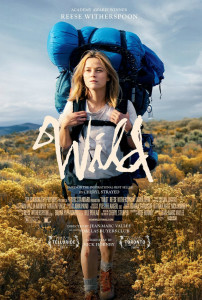 In Wild, the movie’s protagonist discovers something intrinsic to long-distance hiking: it teaches you how to live.  In the movie, Reese Witherspoon confronts tangible realities like hunger, thirst, and yes, even her own shit.  But these concrete images of survival are juxtaposed with flashbacks to her life of excess.  Her challenges on the trail have a clear but difficult solution that requires her to act; her challenges in life were nebulous gray areas where a passive detachment was her best coping mechanism.  As the movie progresses, hikers and non-hikers alike will find themselves longing for the ‘simple solutions’ of an ascetic life – and wondering whether life is more ‘wild’ on or off the trail.

Watching the movie as a hiker is a little bit like hiking through Mahoosuc notch – it can be as difficult or as fun as you want to make it.  You know when you’re watching a romantic comedy and the main character just heaps pain upon themselves by making terrible decisions?  Well, get prepared to have that feeling a lot as you observe Wild from the comfort of the theatre / your couch / your parent’s couch / the grimy floor of a hostel in Maine.

Although it is definitely amusing to watch Reese Witherspoon’s 95-pound frame struggle into a backpack twice her weight, the ounce-counters of the world will be delightfully horrified by the slow reveal of her cringe-worthy gear.  Her aptly named bag, ‘monster’, is a bungee-clad behemoth sporting a dangling travel mug.  Watching the struggles of the petite protagonist – who is so exhausted that even her internal monologue appears to be out of breath – is enough to make even a hardened trail veteran cover their eyes and peek through their fingers.  At five mile intervals, the main character stops, sets up her palatial tent, and spreads out her library of literature which includes a hardback diary the size of an unabridged dictionary.  At one point in the movie she has a swinging, old-timey lantern that I can only hope was a romantic addition by the filmmakers.  In fact, I would not have been too surprised if at any moment she produced from her bag a dutch oven, gold-panning equipment,  or perhaps a Victorian-era marble bust.  Cheryl Strayed apparently took a very literal approach to walking out her emotional baggage. 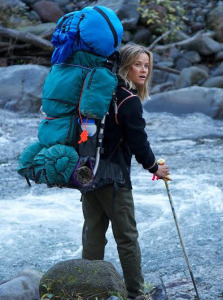 Of course, there are times when the movie inevitably departs from accuracy.  In these moments, a noticeable groan can be heard from the hikers in the audience.  The movie did not use the real Kennedy Meadows, the rattlesnake she encounters sounds like it is shaking a maraca instead of rattling, and the main character appears to maintain a raw-looking pack rash for three months rather than growing calluses.  There are also several appearances from a shiny CGI fox which is fooling absolutely nobody.

And although I was able to chock up the unfailing blonde dye job of the protagonist to inevitable hollywood glamor, I wasn’t able to get over the fact that she did not tie her hair back even once in the movie – leading me as a viewer to wonder if perhaps hair ties were invented after the mid-90s along with lightweight gear, wicking clothing, and common sense.

In all fairness, though, the movie stayed true to Cheryl Strayed’s actual experience, which was colored by a lack of preparation.  After all, who wants to read a story about someone who does everything right?  And despite its occasional campy (pun intended) transgressions, the movie was much more accurate about thru-hiking than the cynic in me expected.

The portrayal of hiker culture was pretty spot on.  Wild was a movie about a personal journey, so Strayed’s hiking partners she mentions in the book were glossed over, leaving room for the solo development of her character.  A little bit goes a long way though, as the glimpses of hiker banter that the movie shows us do a good job capturing the close – occasionally annoying – fraternal relationships that you form with your hiking partners.  Wild also illustrates how hikers have an immediate report with one another because of their shared experience.  The feeling of meeting people who have been chasing your log entries for miles is a familiar, warmly exciting memory, and in the scene where this happens to Strayed we are reminded that camaraderie is crucial to give us a vacation from our own company.  And after my own experiences with transient adventures, it’s a personal relief to see another woman mistaken for a hobo.

My one major criticism of the movie was its fairly one-sided depiction of men as predators, rapists, or sex objects.  Her consensual encounters with men seemed more like confessions than positive experiences, and threatening male characters were literally popping out of the woods.  The movie had some ‘good’ male characters, but there was virtually no character development with any of them, and I left the theatre with the impression that Cheryl Strayed had spent most of her life fleeing or penitentially embracing the advances of rampantly sexual males.

As a woman who has spent aggregate years in the woods, I have found that on trail I feel safer and more equal to men than anywhere else.  That’s why I like to spend my time there.  I feel more alert walking through a city with all the trappings of our society around me than I do in the woods where my clothes, speech, and ovaries don’t seem to matter.  I’m not saying that I’ve never had my knee “mistaken” for a stick shift while hitching to town, or that I didn’t get an extra beer or two bought for me sometimes, but for what it’s worth, I found the trail community a lot more amenable and less sexually threatening than any college party I ever went to.  If my experience has been very different from that of Cheryl Strayed and other women, it makes me want to offer it as a strong counterpoint.  If I could say one thing about hiking and have it stick, it would be this: on the trail, we are all human beings before we are anything else.  At least, that’s how I have felt. 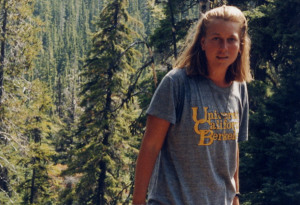 And Wild is a story about a human being alone in the woods.  In fact, it does a great job showing the audience what that experience is like.  By switching the camera’s focus from the passing scenery to old scraps of conversation, the final product really does reflect your thought process on a long distance hike, when loneliness forces you to turn inward and slowly filter through your memories.  Long distance hiking is about endurance, and Wild shows us that, in addition to suffering through rain and snow, we have to also endure our own thoughts for months on end – and sometimes that can be the most difficult part.