Wildfires, Reroutes, and Records: The Future of PCT FKTs

On July 22, 2021, activist and ultrarunner Timothy Olson reached the northern terminus of the Pacific Crest Trail having set off from the Campo and covering all 2,652 miles in a time of 51 days, 16 hours, and 55 minutes. This tops the previous achievement of 52 days, 8 hours, 22 minutes set by Belgian ultrarunner Karel Sabbe set in 2016 – a record nabbed from FKT legend Joe “Stringbean” McConaughy from two years earlier.

Olson, a two-time winner and former course record-holder of the famed Western States 100-mile ultramarathon, had been building toward this attempt for many years and planned to give it a go in 2020 only to be sidelined by the COVID-19 pandemic. This year, however, he felt it was time. Though his progress was mostly kept private due to concerns of crowding and COVID-19 transmission, his tracking information was released during the final week of his attempt as he closed in on the finish.

Olson’s journey ended with little fanfare: a small cohort of friends and coaches met him at the terminus but in order to reach his crew he needed to backtrack 30 miles due to the land border closure between the United States and Canada. After nearly two months the effort was at last complete, but it was by no means simple: all along the way, he was affected by 100+ degree temperatures, logistical challenges, and fire closures requiring route changes – all while covering an average of 51.3 miles per day.

Olson was supported by a crew of his family including his wife who was pregnant with their third child. In addition to the record-setting aspirations, Olson was raising money and awareness for Return to Zero: HOPE, a “a non-profit organization engaging a global community of bereaved parents and their health providers to improve mental health outcomes, while also advancing pregnancy and infant loss awareness, education, and support”. Having suffered the loss of two miscarriages, Olson and his family turned to nature, mindfulness, and running to assist with the healing process and hoped to share the information and resources of RTZ Hope with others who have experienced such a loss. 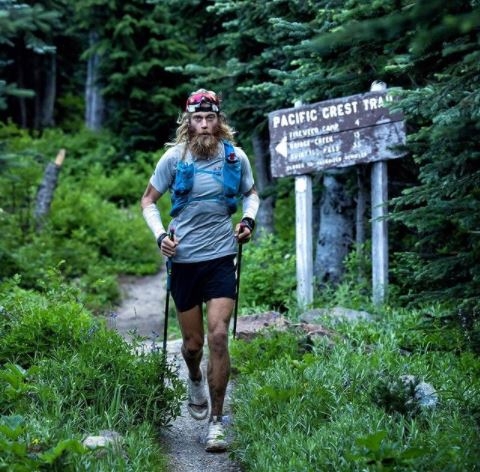 Despite a jaw-dropping finish time, Olson’s attempt has received criticism due to a series of necessary routing changes due to wildfires. In an act of full transparency, his crew posted a message on the FastestKnownTime.com website explaining their reroutes:

Reroute #1. June 8, 2021. Bobcat Fire: mile marker(MM)381 to 403. For this closure I was able to approximately parallel the PCT along Highway 2 with the reroute distance being 17 miles.

Reroute #2. July 10 and 11, 2021. Lionhead Fire: MM2028.1 to ~2048.7. This is the most complicated reroute with many nearby roads and trails closed due to the fire damage. First, at MM2028.1 I will be hiking west to the Pamela Lake Trailhead (3 miles) to be picked up by my crew and shuttled to the other end (north side) of the fire closure. This will be approximately a 3+ hour car ride. Because the Olallie Scenic Area Road (Road ID: 4220) heading towards the Olallie Meadow Campground is closed barring the accessibility of a vehicle to get closer to the end of the Fire closure at ~MM2048.7, I will be hiking into the PCT from Skyline Road via a 3 mile trail just north of Warm Springs River and intersect the PCT at MM2066.0. From there the plan is to run south on the PCT to the end of the fire closure (~MM2048.7) and back up the PCT northbound again to continue my journey to Canada. In doing this I will have run a total of approximately 23 fire route replacement miles.

Further, the team reiterated their commitment to the trail and transparency on the effort:

It’s really important to me that I honor the PCT by covering as much of the full distance of the trail as well as run as much of the trail as possible and practical. I thought it would be important and interesting to share this information so that you know what my plans are to work around the various fire closures. I’m excited to continue to trek onwards; pushing my body to its limits. I will also note that this PCT journey is not finished. I do realize the potential for closures is still high as I cover these remaining miles. In the event of a future closure, I will undertake the same ethos stated above and be fully transparent.

In a separate article, FKT facilitators Peter Bakwin and Buzz Burrell outlined their thought process for accepting these alterations, stating that all those attempting this, or any route must respect official closures, follow official reroutes (if they exist), and be clear about any alterations they make. In Olson’s case, it was determined that although he could not possibly run every mile of the trail, his rerouting turned out to be the same distance and vertical gain so no variant – a determination that his route and record separate from the original due to significant changes – would be necessary.

Though such reroutes make the completion of a continuous footpath more complicated, it also “highlights the impact of climate change and other human activities which affect the natural environment, bringing awareness and energy to these urgent issues”, says Bakwin.

The Future of PCT FKTs 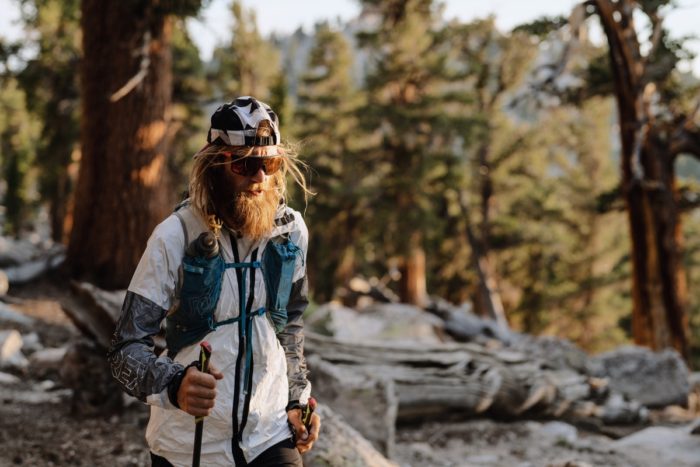 As one commenter noted, it has not been possible to complete the PCT in its entirety without a fire closure since at least 2013 – meaning that the past three supported attempts have had to deviate at least once from the original route. As such events continue to rise in number, FKT attempts receive increasingly intense criticism – and they have a point: it’s hard to argue that rerouting 100 (or more) miles on asphalt is not easier and faster than the trail.

On the other hand, our nation’s long trails are living entities. They are constantly adjusted in routing and length due to changing conditions, land use ordinances, or permitting, so it’s never exactly the same year to year. This is something thru-hikers and FKT-hopefuls have acknowledged and accepted, but at what point does it deviate enough to become a separate effort altogether?

In the case of the Continental Divide Trail (CDT) there aren’t any FKT attempts because it has no definite routing, only suggestions and best practices, which are left to the hiker to interpret and then decide their path. As a result, there is no fair way to level the playing field between record-setting hopefuls because there are too many variables that could alter the distance and vertical gain of the route.

On the PCT, however, it is unlikely that the routing issues will devolve to the point of the CDT-level navigation. Because it’s one of the most highly competitive records in existence, Bakwin and Burrell have stated they will adapt the approved route to what is appropriate for each year going forward. While this likely means the trail will never again be done as it was originally described, it will allow for future efforts to continue on this premier route. Bakwin notes, “if you’re going to go after an FKT on the PCT you need to be prepared for controversy. People are passionate about the PCT, and many are passionate about the purity of thru-hiking ethics”.

Timothy Olson’s record-breaking time of 51 days, 16 hours, and 55 minutes on the PCT is, without a doubt, a monumental achievement that should not be discounted. That being said, the long-term viability and legitimacy of future FKT attempts has been called into question based on the increasing amount of route changes due to wildfire closures.

Despite these challenges, the team at FastestKnownTime.com is confident that the PCT will continue to be an inspiration for athletes around the world. Though it adds exceptional difficulty to their duties of validating records, Bakwin and Burrell say they are ready for the challenge. Their advice to those wishing to tackle an FKT on any of the major routes: first learn and respect the hiker culture of the trail.