I was fortunate enough to complete the Wind River High Route this August with two friends. Below you’ll find a detailed, photo-based description of our route. The best thing about a high route is that it’s very much a choose-your-own-adventure hike. The key is to be adequately prepared (fitness, gear, skills) and do your research ahead of time so that you’ll be free to improvise when the time comes.

The next installment of this report will include my gear list, food plan, and answers to some frequently asked questions about the Wind River High Route. For now, though, I’ll let the pictures (mostly) speak for themselves.

Our route (we followed Adventure Alan’s version) started with a mellow on-trail hike from Green River Lakes Trailhead. Views of the river and Squaretop Mountains stole the show in this section. 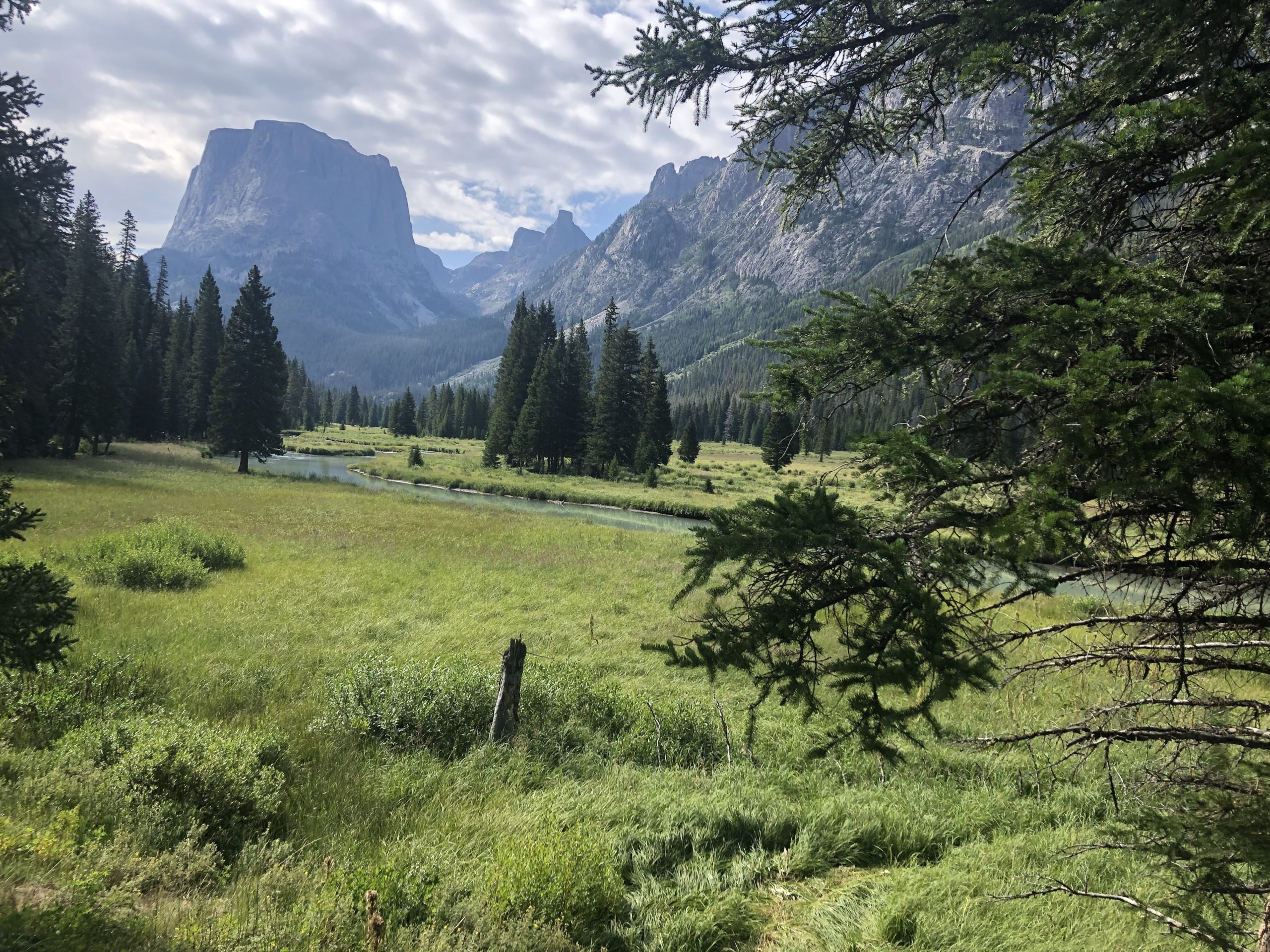 Squaretop with the Green River in the foreground.

Eventually, we hung a left at the signed junction with the Vista Pass Trail, hitting Vista Pass, Dale Lake, and Cube Rock Pass before stopping for the day at beautiful Peak Lake. 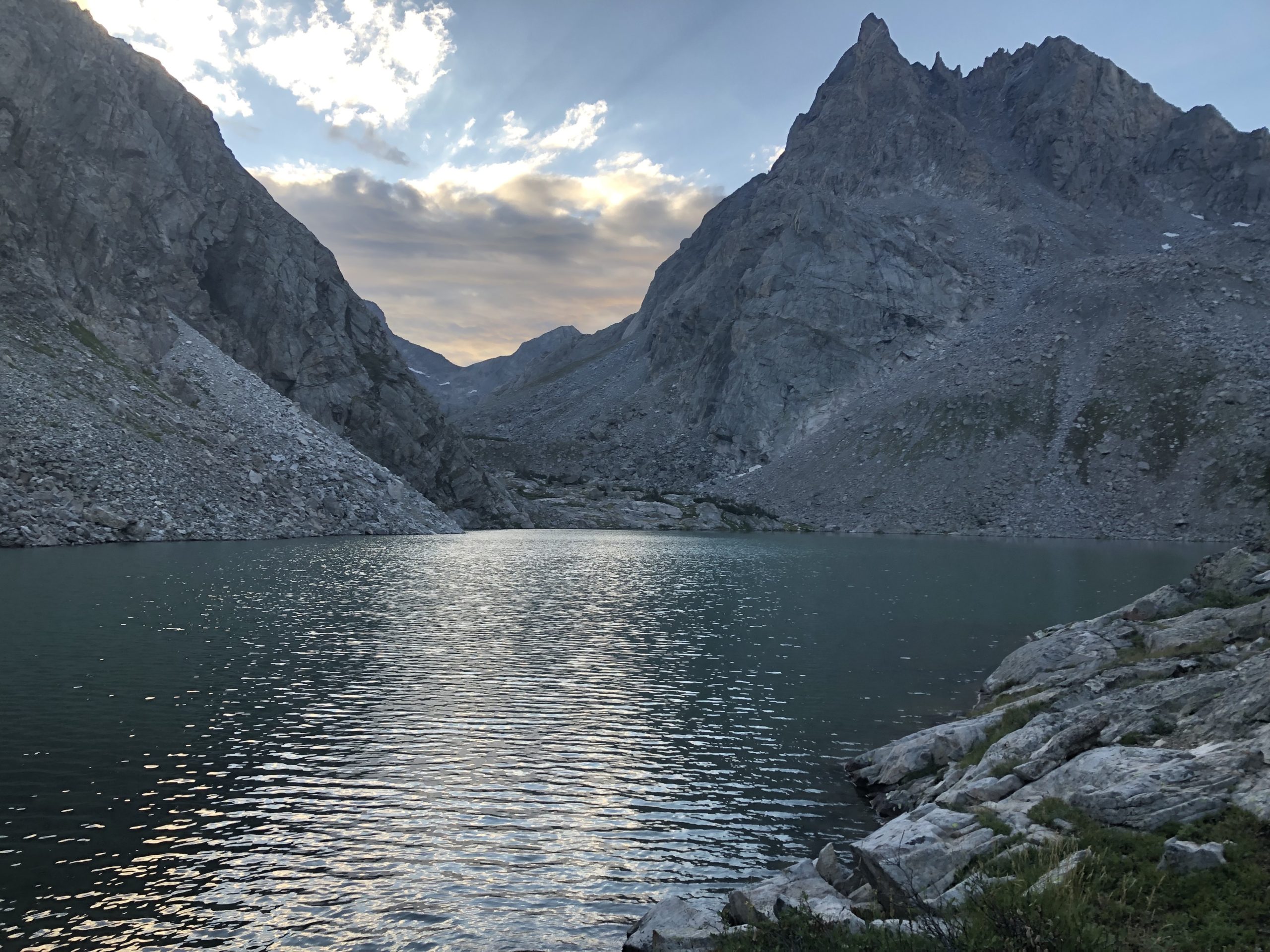 The next morning, we had a tough scramble up and over Knapsack Col before descending into Titcomb Basin. A little lightning and hail were not enough to dampen our spirits in this gorgeous and cruisey section, which follows a popular, well-established trail throughout most of the basin. 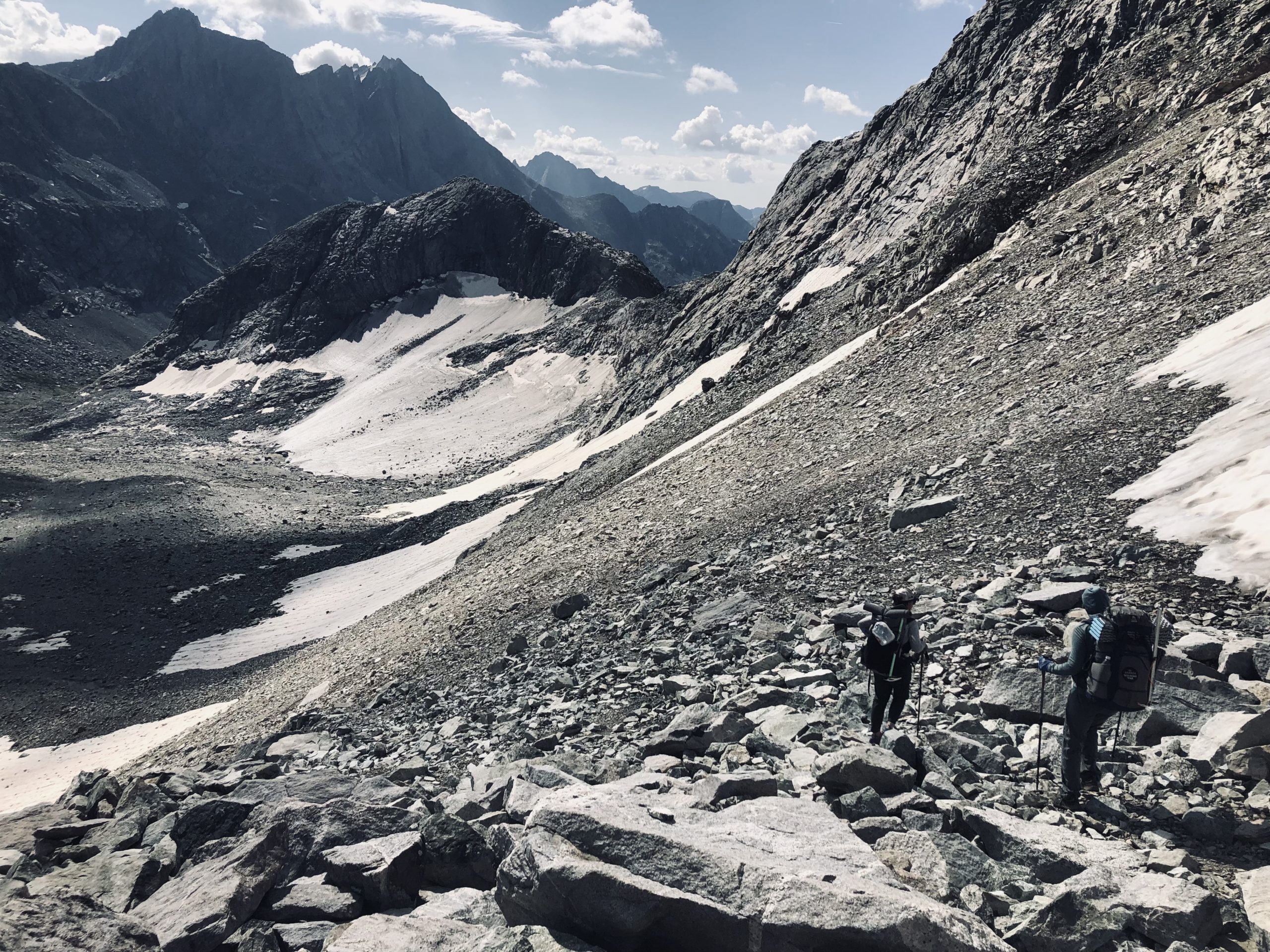 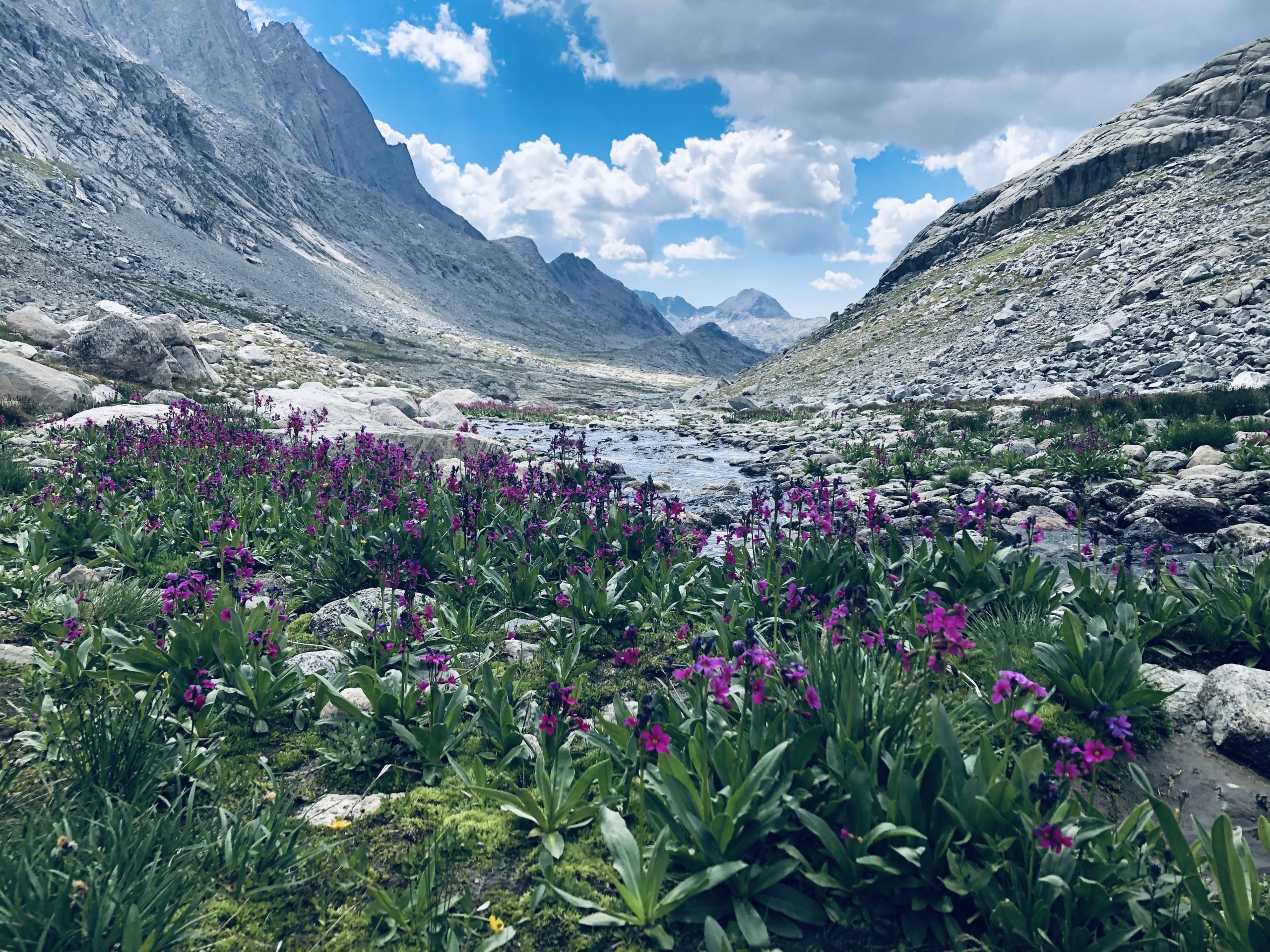 Parry’s primrose in Titcomb Basin. I was surprised by the number of wildflowers persisting in late August.

From Titcomb, we hung another left at the signed junction with Indian Pass Trail and followed it up to the top of the basin, camping at the last large lake before Indian Pass. The trail is fainter in this section but still easy enough to follow. The basin is gorgeous and feels far more remote than Titcomb. 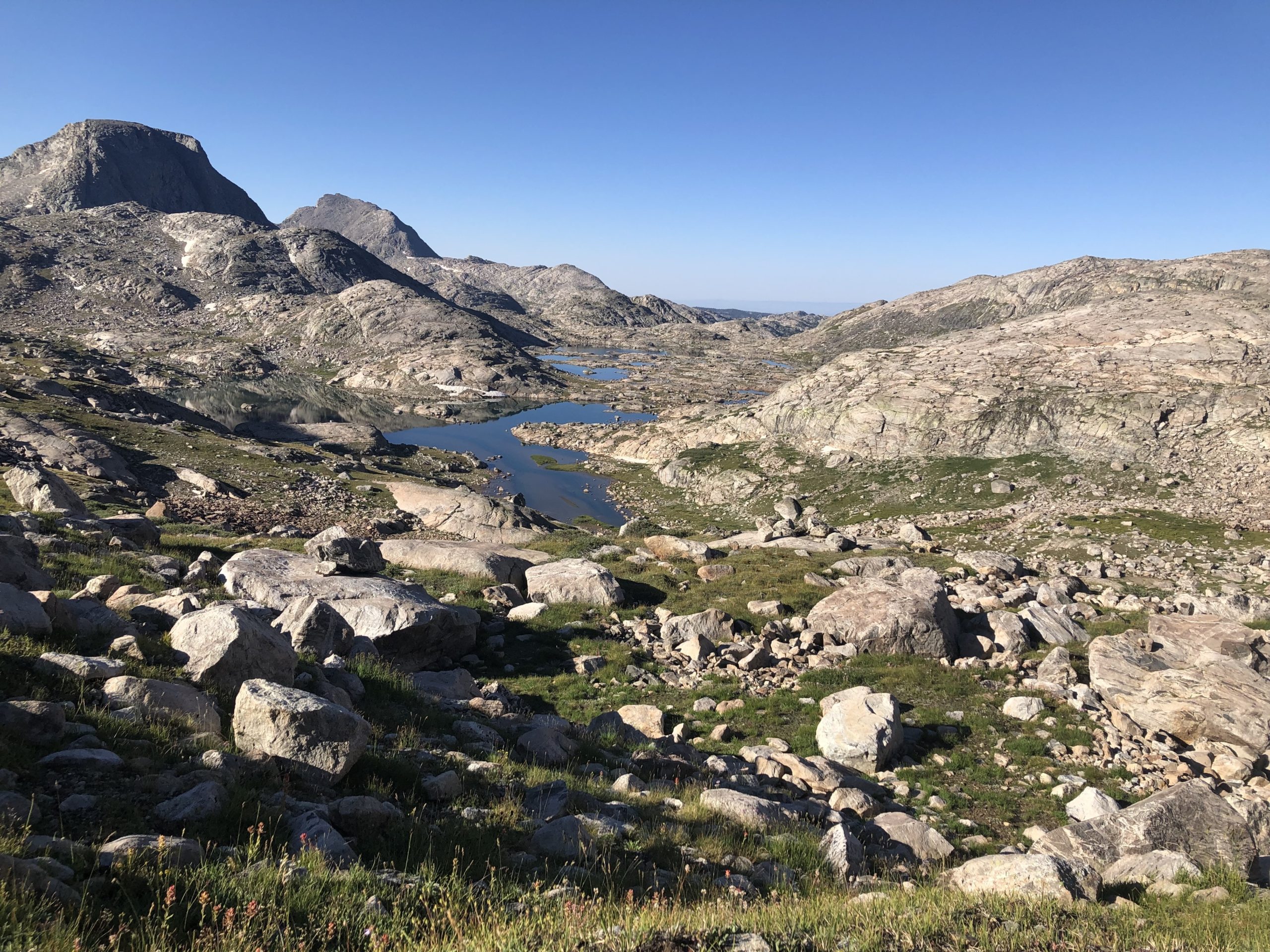 Looking back toward our campsite at the last large lake before Indian Pass.

In the morning, we had an easy on-trail climb up to Indian Pass. From there, we scrambled down a talus jumble to reach the Knifepoint Glacier, a half-mile traverse that was straightforward thanks to microspikes and ice axes. The loose, unstable talus on the far side of the glacier leading up to Alpine Lakes Pass proved far more challenging than the glacier itself. 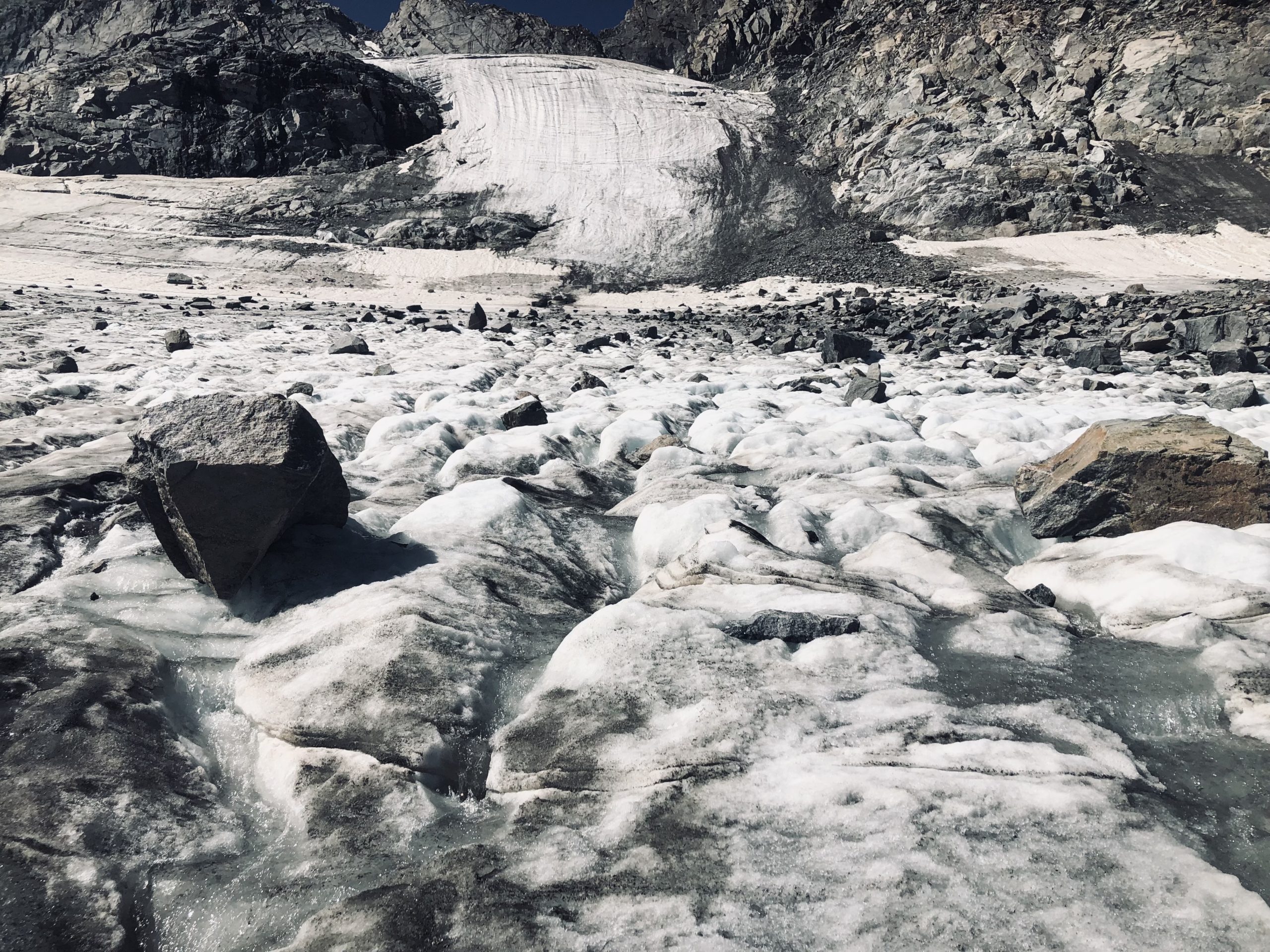 The view of Alpine Lakes Basin from atop the pass was to die for, and the hiking in the basin itself was equally lovely. However, we paid for all that beauty in blood, sweat, tears, and talus. SO MUCH TALUS. The struggle was well worth it. 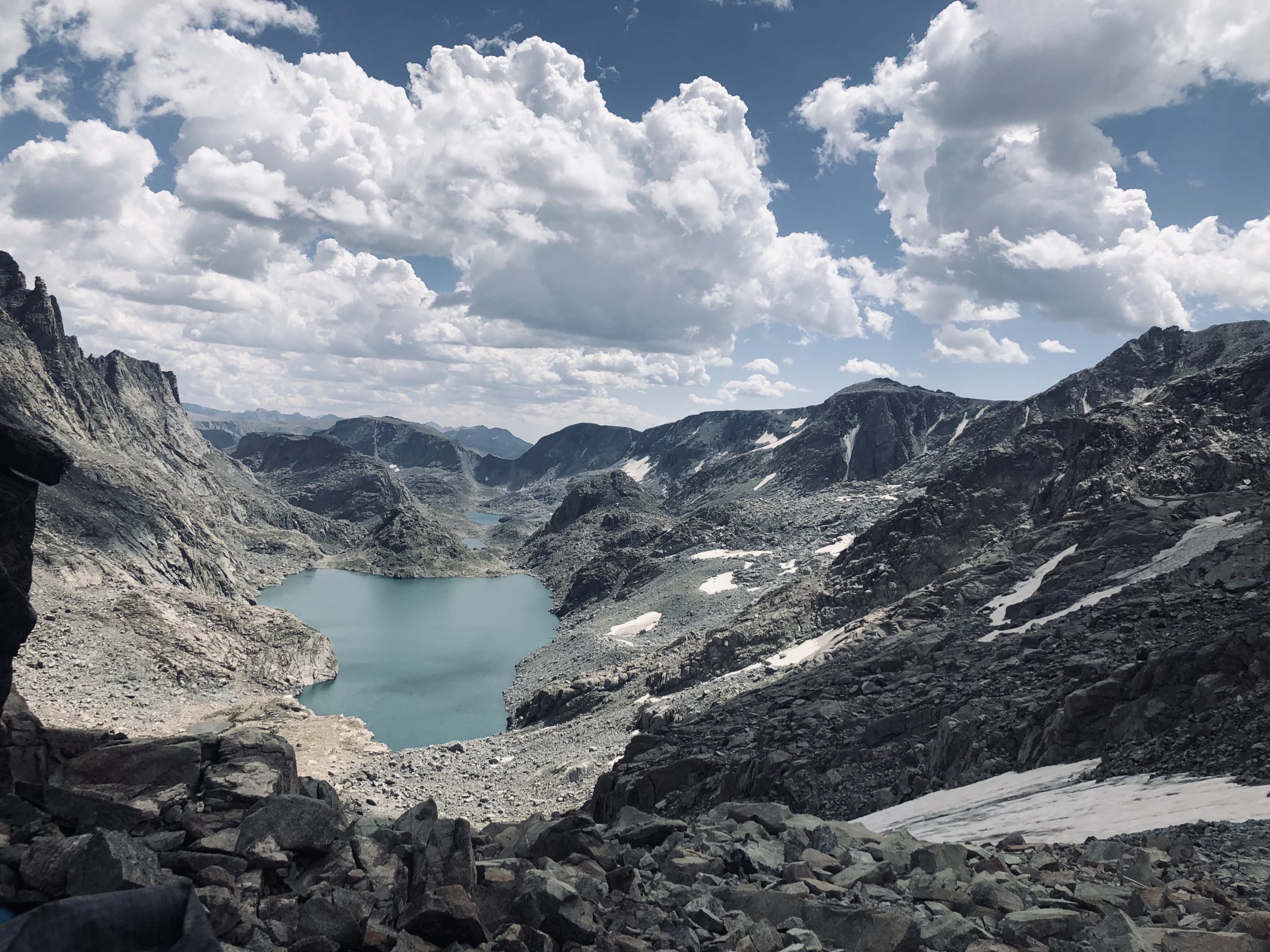 Looking down into Alpine Lakes Basin, one of the most challenging and rewarding sections of the route.

The second lake in the basin was too gorgeous not to camp by. 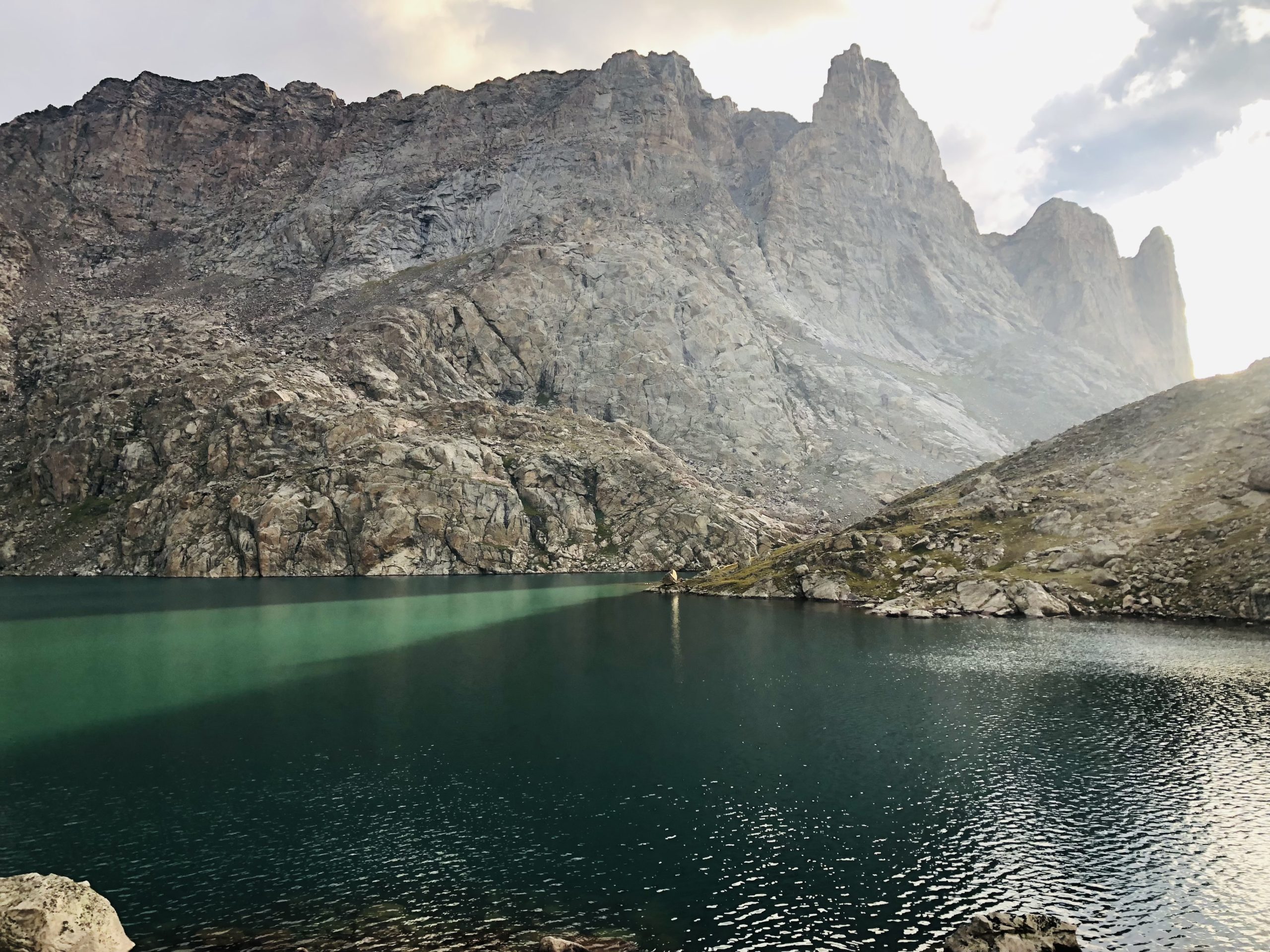 Taken near our campsite on the shores of Alpine Lake no. 2.

In the morning, we continued out of the basin, taking a Class 2 alternate around the third Alpine Lake rather than following Alan’s official route. The alternate added a few miles but was a lot of fun, featuring a fun and easy series of ramp systems down to Camp Lake, and the first trees we’d seen since Day One. 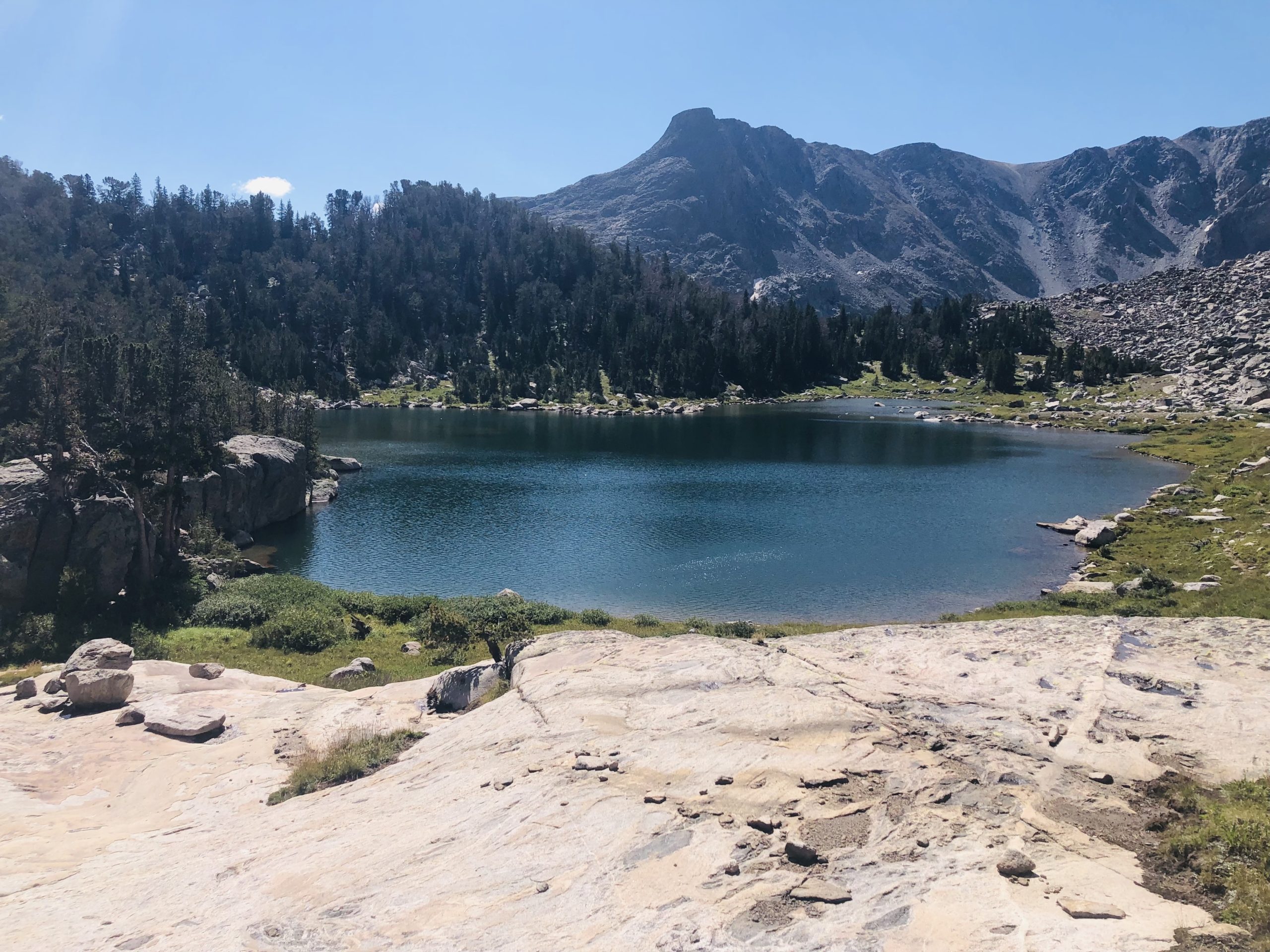 Descending a cruisly ramp system to an unnamed (?) lake just before Camp Lake.

A stiff climb over an unnamed pass from Camp Lake brought us down to the Golden Lakes, and we eventually picked up the Hay Pass Trail for several miles. We camped in a meadow on the other side of the eponymous pass just after diverging from the trail once more. 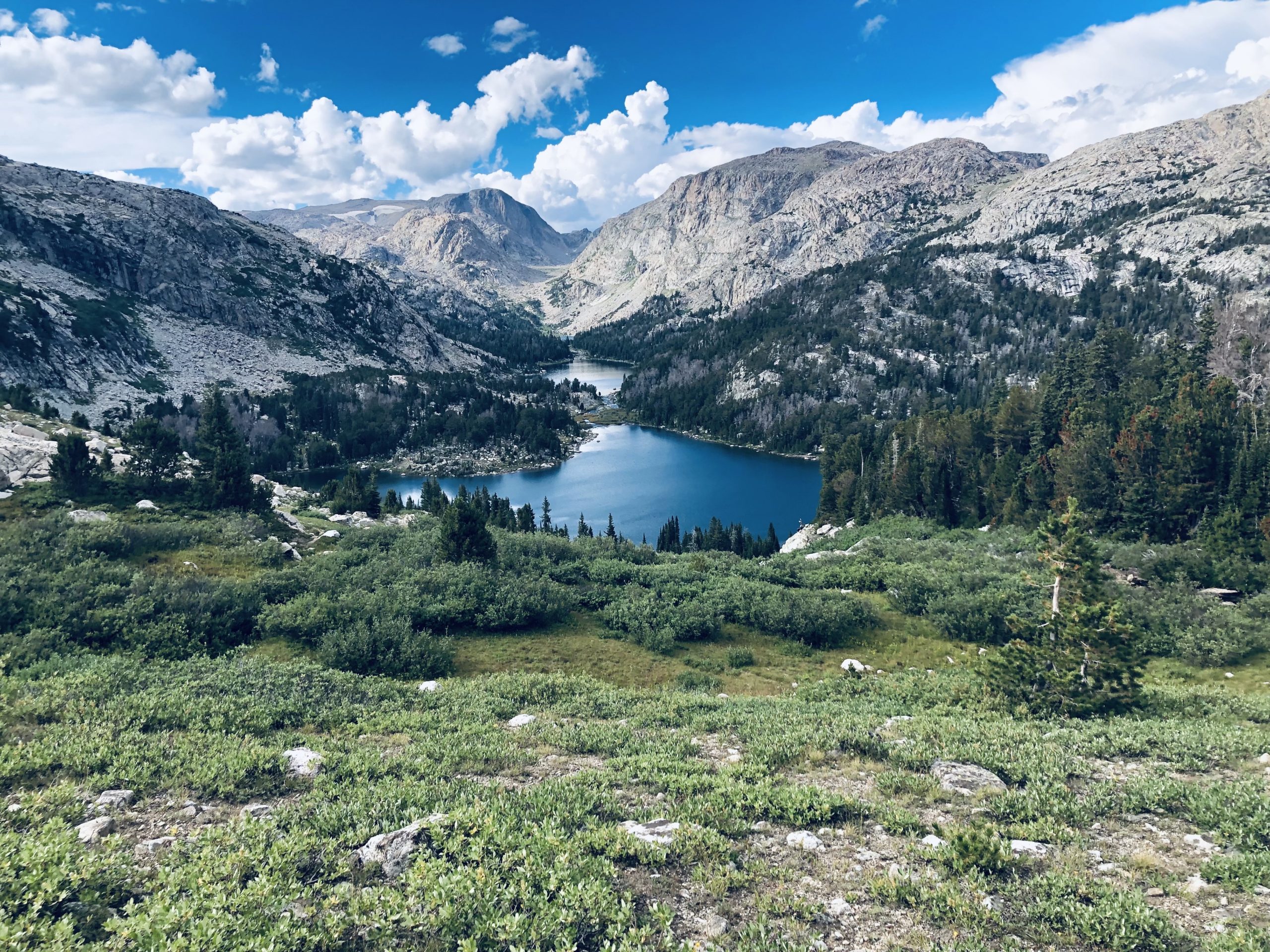 Looking back at Golden Lake and Lake Louise beyond it.

The next morning, we trekked overland toward Long Lake, passing through a short, boggy section along the way. Despite the icy bog, this section is easy walking.

Long Lake is, you guessed it, long, and involves a certain amount of talus hopping. We got past it in high spirits without too much difficulty. 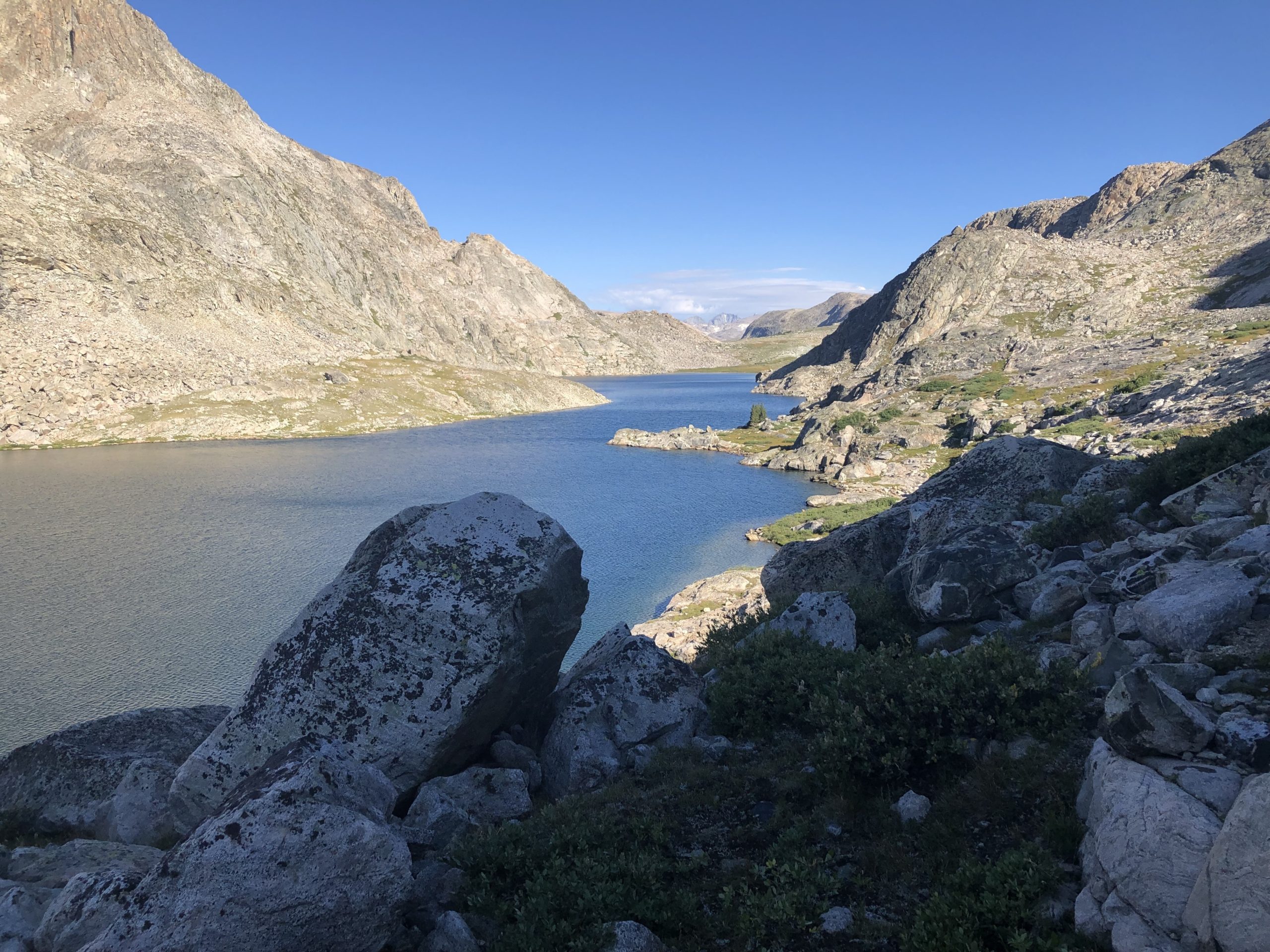 Long Lake lived up to its name.

Another long, overland stretch toward stunning Middle Fork Lake via Hall’s Lake. Nothing too remarkable in this section other than a perfect Pride Rock(!) sighting and an ill-fated shortcut that ended in a great deal of surprise bushwhacking. 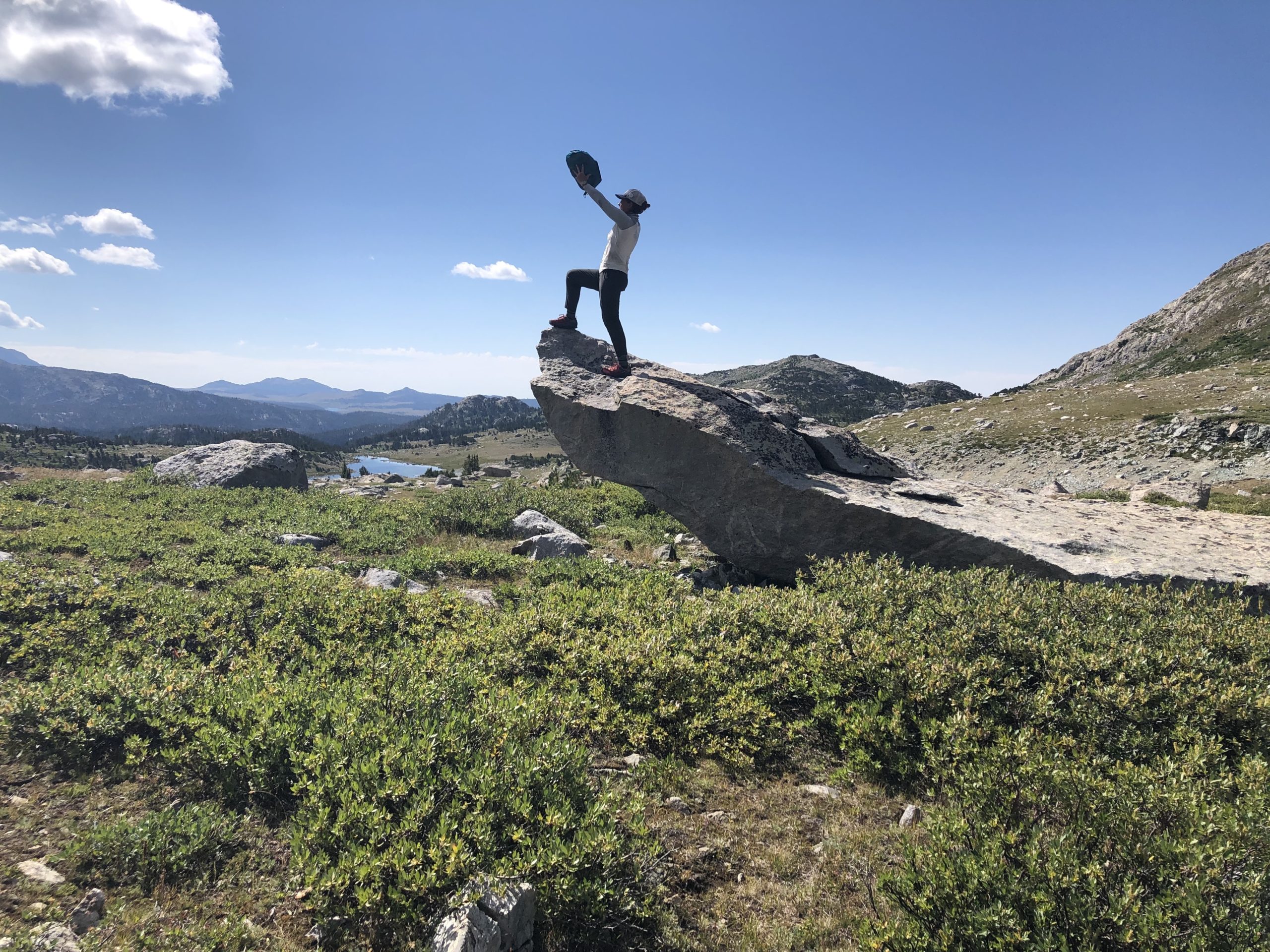 Skirting Middle Fork Lake on a gentle trail, we got our first sighting of the pass to come. Pronghorn Peak, Nylon Peak, and Dragon’s Head made for epic scenery. We all agreed the valley looked like an illustration from the cover of a mass-market paperback fantasy novel. All it needs is a castle and a dragon flying around in the sky around Nylon Peak to complete the image. 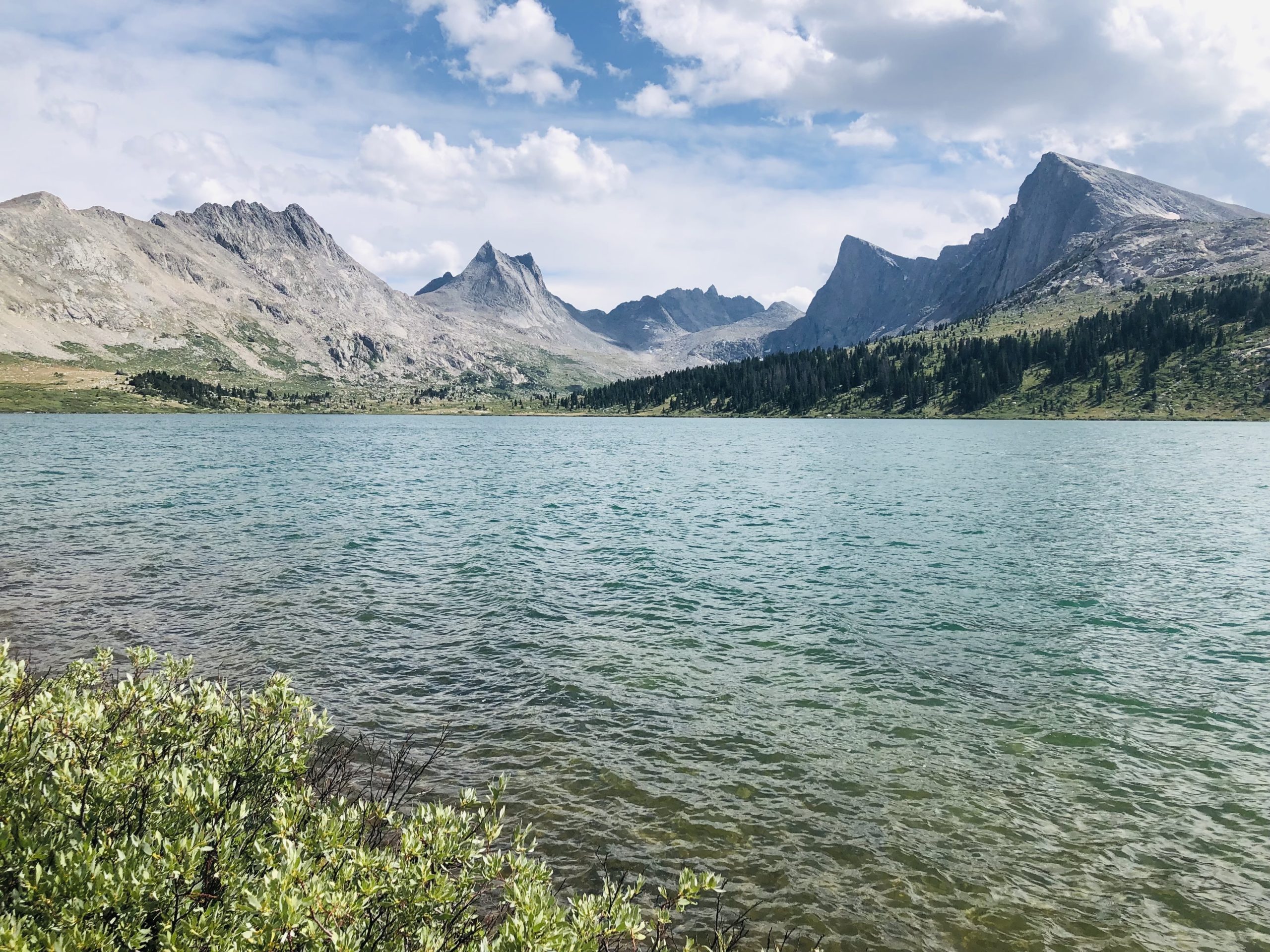 Climbing to the pass was tiring at the end of a long day—but also unbelievably cool. The ramp system down the other side of the pass is grassy and mostly mellow, though as Alan says in his guide, you may have to do a bit of route-finding to come up with a good way down.

At the bottom are the two Bonneville Lakes—we went past the first one and opted for good camping at the second after dropping down a literal cliff face to access it (don’t worry, there’s a straightforward ramp system to get down there and a trail at the bottom). 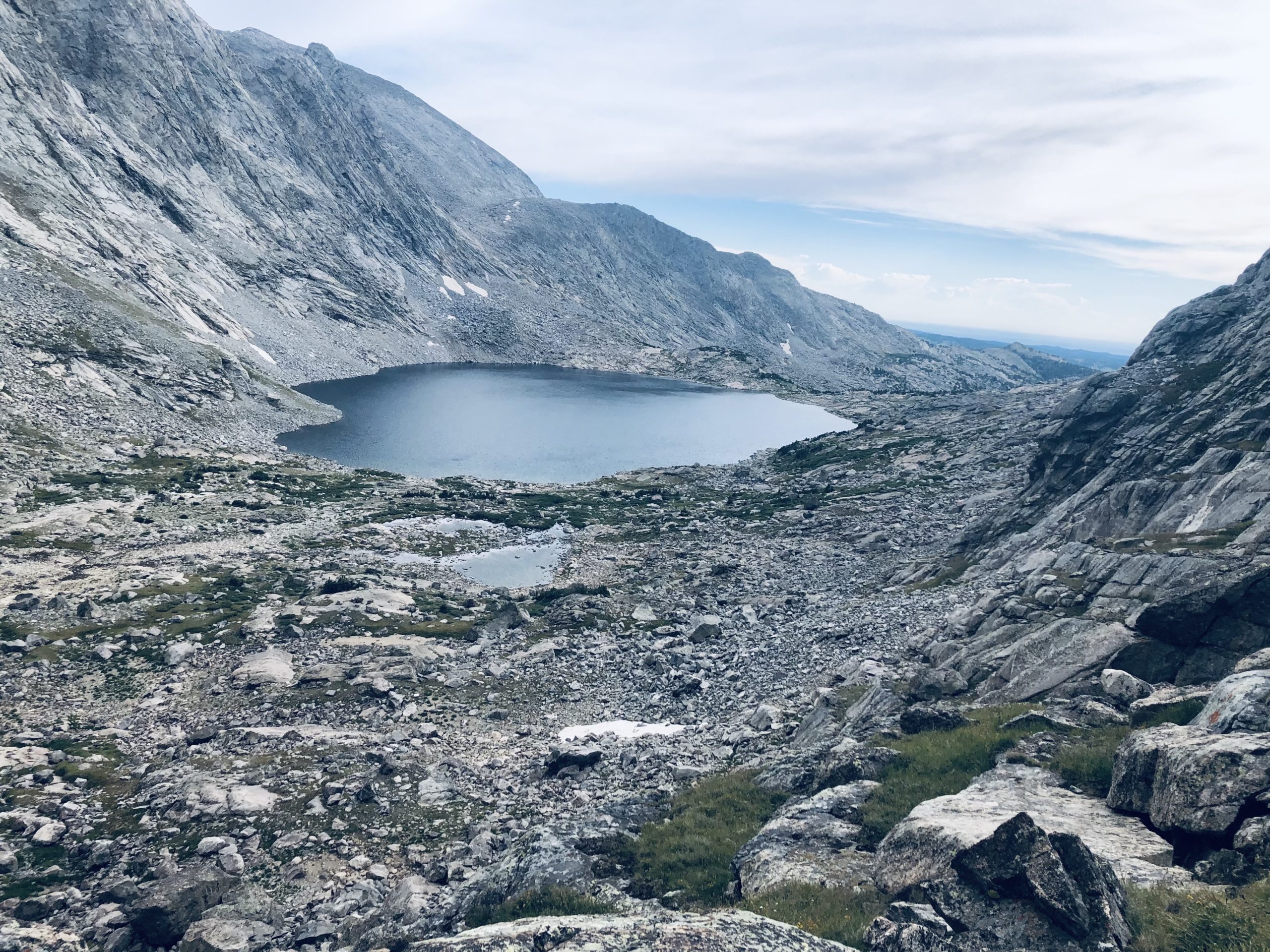 The next morning was a complete shitshow as we were too focused on our conversation rather than where we were going, resulting in a charming pedestrian tour of the Greater Bonneville Lakes Area. The pass after the lakes is surprisingly talus-y on both sides, which was not the surprise we were looking for after a morning of unplanned extracurricular walking. Oh well. 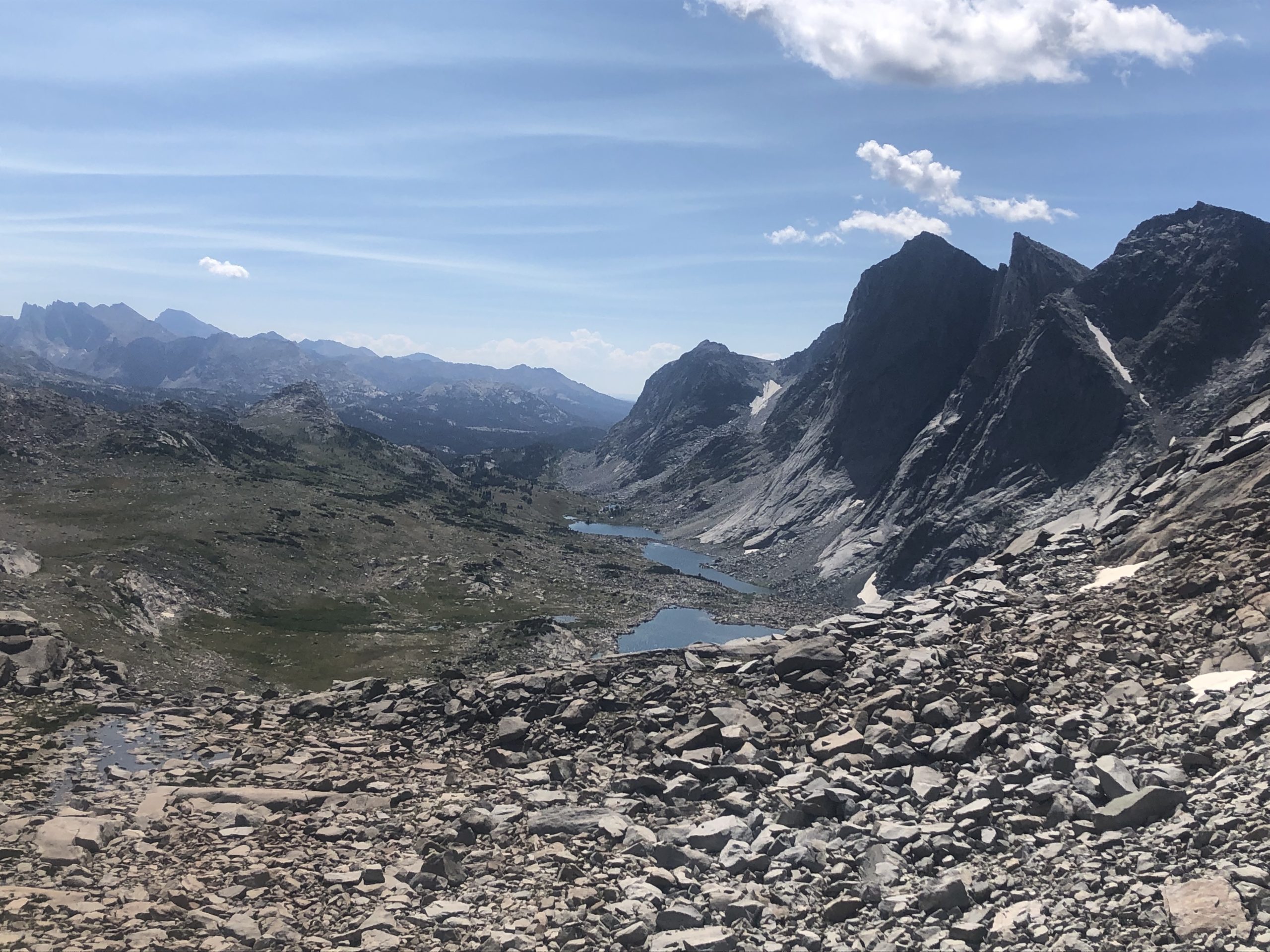 What the FUDGE are all these ROCKS doing up here?!?! Unnamed pass after Bonneville Lakes.

After getting through the talus jungle gym, the route mellowed out a lot. We eventually picked up the cruisey Pyramid Lake Trail and followed it all the way to Washakie Creek.

We turned left at the creek and followed a mostly flat trail up to Shadow Lake, where we camped on the shore with an excellent view of the back side of the Cirque of the Towers. 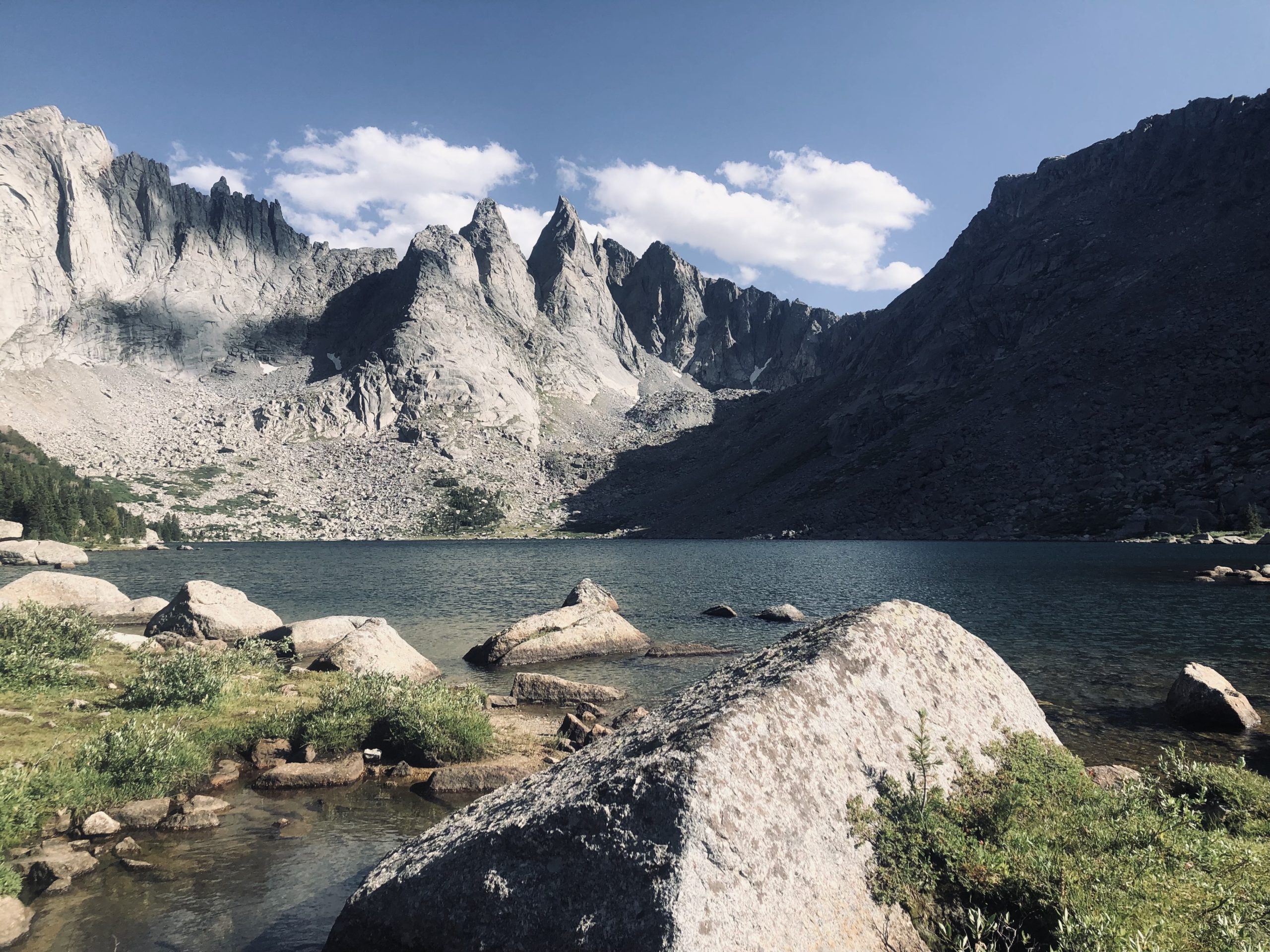 Shadow Lake and the back side of the Cirque of the Towers.

On our final morning, we went up and over Texas Pass (a steep but honest climb on an obvious use trail) to access the Cirque and spent a leisurely morning admiring the beauty of this iconic area. 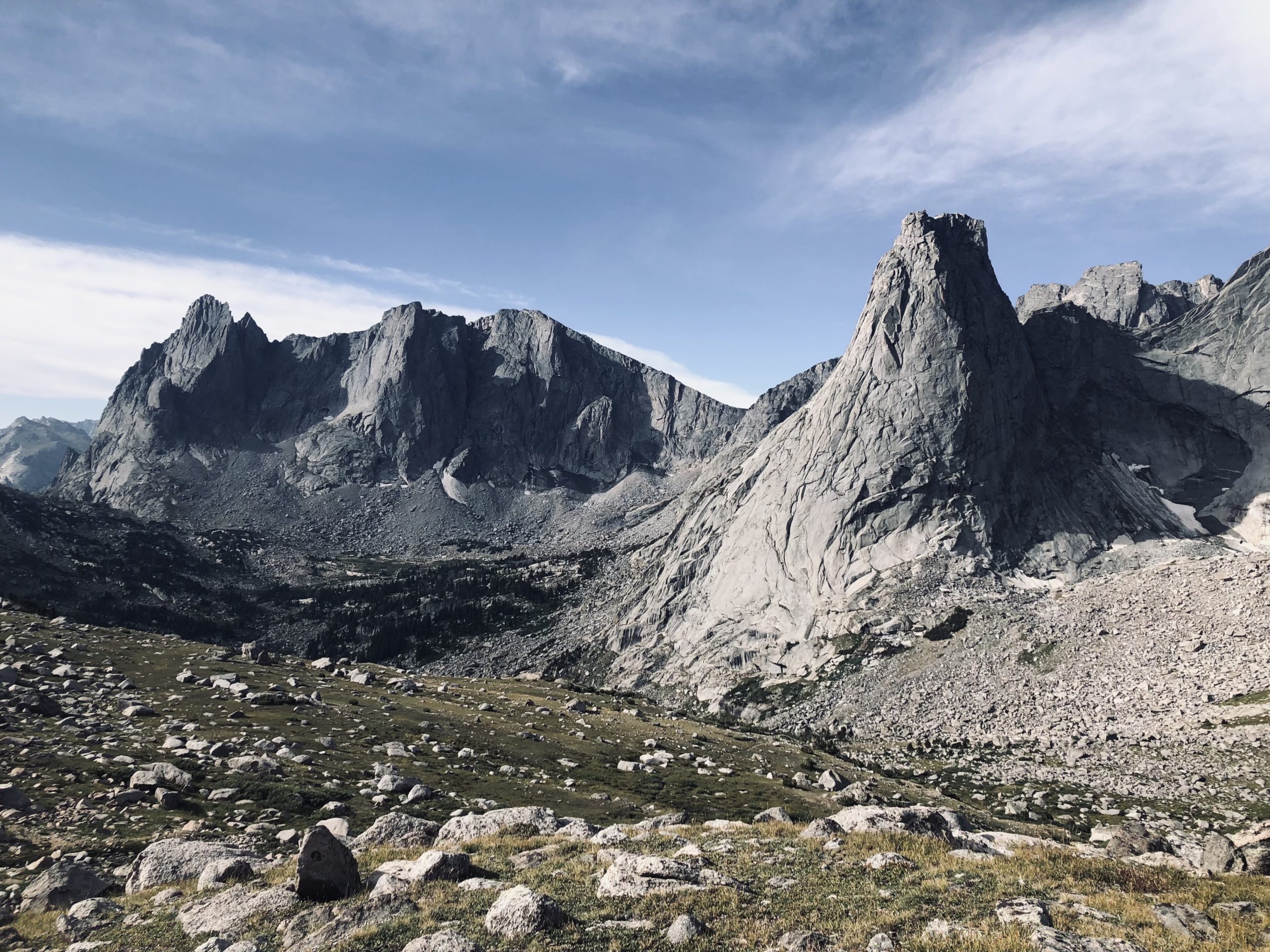 Pingora Peak (right) in the Cirque of the Towers.

In my head, I assumed that after the Cirque and Lonesome Lake, the views would be over, but the fun continues up and over Jackass Pass and lovely Arrowhead Lake on the other side. 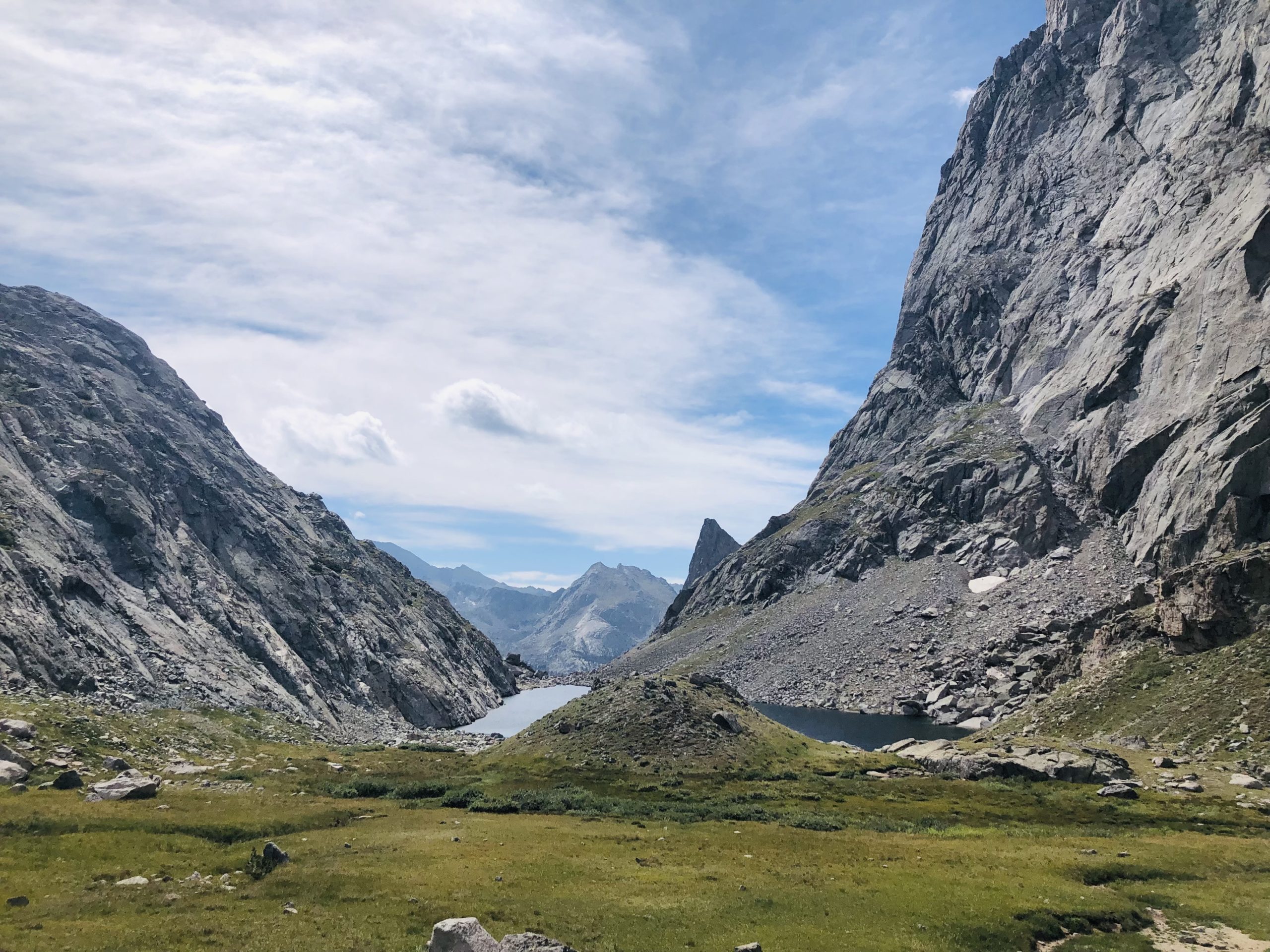 The magic continues at Arrowhead Lake.

At Big Sandy Lake, we picked up the Big Sandy Trail and followed it about five or six miles to the trailhead, bringing our talus-filled frolic to a satisfying end.