A 56-year-old woman died after a tree fell on her tent on the Colorado Trail near Grizzly Peak. The incident happened late Monday, Aug. 13.

The San Juan County Sheriff’s Office reported in a social media post that three women had the tree fall on their tent. Beth Skelley of Lafayette died from her injuries. Her two companions were unharmed.

“This a shockingly stark reminder that no matter how safe your actions, the mountains are inherently dangerous,” the Sheriff’s Office wrote on its social media account. 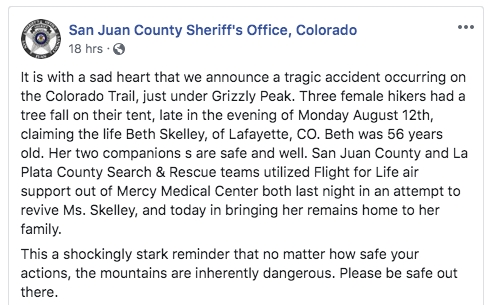 Search and rescue crews from San Juan and La Plata counties were called to the scene Monday night. Attempts to revive Skelley were unsuccessful, and she was transported from the area by search and rescue crews Tuesday. It is unclear whether the women were thru-hiking the Colorado Trail, or were out for a shorter trip.

As of Tuesday afternoon, media attempts to reach the Sheriff’s Office were unsuccessful.