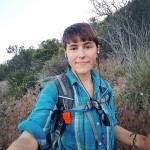 10 Books on Hiking and Nature Written by Women

In researching this list I spent some time searching the web for content relating to women and the outdoors and what I got was a ton of results relating to either 1) Safety or 2) Personal hygiene. Whilst these are all great and important, I want to create a reading list of books by women who have achieved greatness in the outdoors and inspire other women to do the same (and no it doesn’t include Wild). Nature writing has traditionally been dominated by men with very little diversity of any kind. But in the last few decades there have been a huge number of well regarded nature texts written by women and many have been central to the environmental movement. It was hard to pick just ten books for this list so if you have any suggestions for books on nature, hiking or the outdoors by female writers please leave them in the comments. 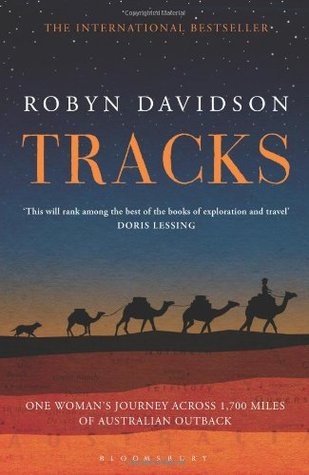 Tracks is a moving account of Robyn Davidson’s attempt to hike 1,700 miles across the Australian outback with the company of four camels. Much of the book is dedicated to Davidson’s desperate and sometimes disastrous attempts to acquire the camels in the first place. She eventually embarked on her trek, partly thanks to funding from National Geographic who sent a photographer to cover her journey with whom Davidson enters into a complicated relationship, resenting his intrusion on her solitude.

Thru hiking will break your heart by Carrot Quinn 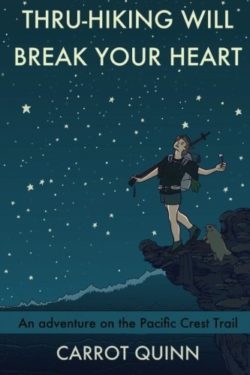 Carrot Quinn’s book is an insight into thru hiking the Pacific Crest Trail from the perspective of a queer woman. This is probably my favourite account of thru hiking of those that I’ve read because it’s so relatable. Carrot is a very honest writer and her stories from the trail are both humorous and moving, like all her writing. You can read about her other hikes in the link above. Bonus – I lent this book to my Mum so she could learn more about thru hiking and now she’s the biggest fan of Carrot and follows her blog with dedication. 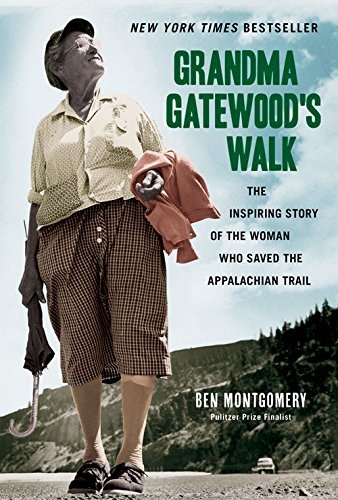 Grandma Gatewood’s Walk: The Inspiring Story of the Woman Who Saved the Appalachian Trail by Ben Montgomery*

Grandma Gatewood is my heroine. Disclaimer: this isn’t a book by a woman or LGBTQ author, but I couldn’t not include the story of Emma Gatewood, the 67 year old Grandma who in 1955 was the first woman to thru hike the Appalachian trail, and the first person ever to hike the AT twice. She was mother to 11 children, and a survivor of many years of domestic violence. Grandma Gatewood was also the ultimate ultralight hiker, she hiked in Keds sneakers, carried a shower curtain in lieu of a tent or sleeping bag and carried all her gear in a sack over her shoulder (anyone want to bring this back for 2017?).

*Yes, we know this was written by a man, but it’s about Grandma Gatewood, so 100% worth including 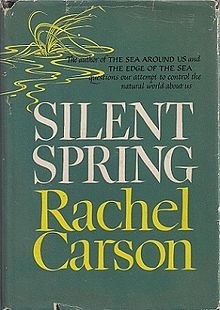 Widely regarded as one of the books which kickstarted the environmental science movement, Silent Spring is an account of the detrimental impact of pesticides – namely DDT and  on both the natural and human world. Carson wrote the book whilst suffering with cancer herself (she died two years after it was published) and presented evidence that farmland where pesticides are used without limit was leading to high cancer rates in the local area and destroying local wildlife. As a result of Silent Spring, use of DDT was banned and Carson was awarded the Presidential Medal of Freedom after her death. 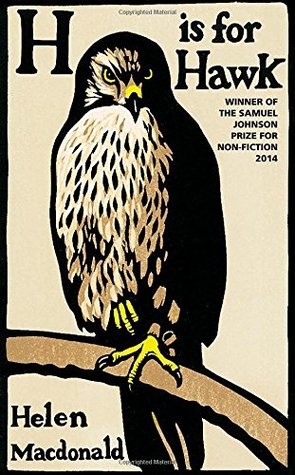 H is for Hawk by Helen MacDonald

In dealing with the grief of her father’s sudden death, Helen MacDonald, following a lifelong love of bird of prey, made the decision to buy and train a young goshawk, who she names Mabel. The terrifying wildness of the hawk and the English landscapes described in the book are striking, as she grapples with the hawk, she deals with her father’s death. She learns to get along with Mabel, to hunt with her, and even play with her – they play catch with rolled up balls of paper. H is for Hawk brings together nature writing and personal narrative and a woman’s strange love for a dangerous bird of prey. 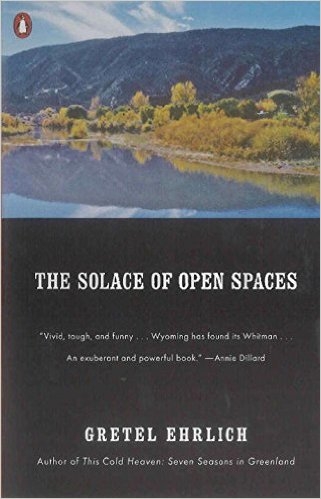 The Solace of Open Spaces by Gretel Ehrlich

“Everything in nature invites us constantly to be what we are. We are often like rivers: careless and forceful, timid and dangerous, lucid and muddied, eddying, gleaming, still.” The Solace of Open Spaces is about leaving urban life behind for the Wyoming wilderness in the 1970s and finding a home there. Ehrlich also writes in depth about the local community – mainly cowboys, sheep herders and their wives – and how it differs from city life. She discusses gender stereotypes in the American West and the critical role women play in the community. 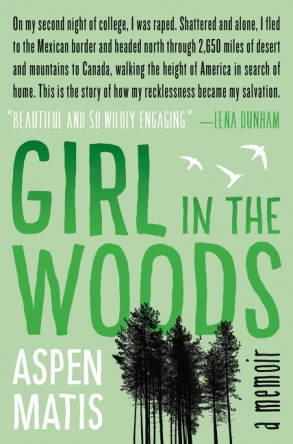 Girl in the Woods by Aspen Matis

Aspen Matis hiked the Pacific Crest Trail after enduring a rape on campus in her first term of college. When her college failed to prosecute, or even remove her perpetrator from the school, Matis began making plans to drop out of college and hike the PCT. Not only is this book an excellent account of thru hiking the PCT, it is also a striking example of how healing can be found in nature. I owe a lot to Matis – when I first read Girl in the Woods I had never heard of the PCT, and now a year later I’m about to embark on a thru hike. 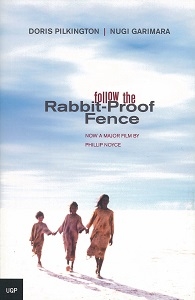 Doris Pilkington’s mother, Molly, was part of the ‘Stolen generation’, a generation of mixed-race aboriginal children forcibly taken from their families by the Australian government and placed into camps set up with the aim of encouraging aboriginal assimilation into Australian culture. Follow the Rabbit Proof Fence is the story of how Molly, her younger sister and cousin, escaped the encampment and walked over 1000 miles through Australian backcountry on their own to return to their family. The girls learn how to survive on their own in the backcountry for months at a time and how to evade capture by Australian authorities. 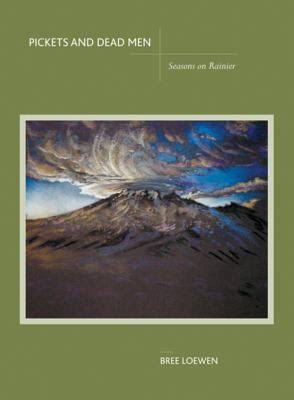 Pickets and Dead Men: Seasons on Rainier by Bree Loewen

Bree Loewen worked as a climbing ranger on Mount Rainer where she was one of the only female employees, this book recounts her stories of learning the trade and fighting for respect from the public and her colleagues. Loewen shares the harsh reality of living in the mountains, the misogyny of her colleagues and her own misdemeanours in the field and the associated danger she sometimes finds herself in. There is a quote in Pickets and Dead Men which rings particularly true for thru hikers: “The greatest skill I ever had was the one I started with: being able to suffer for long periods of time and not die. In exchange, I got to see some amazing things.” 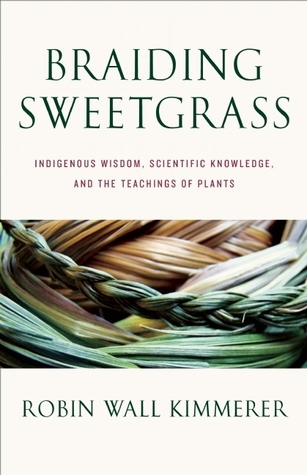 Braiding Sweetgrass is a beautiful and accessible book on ecology. In contrast to the scientific, biological descriptions of plants and animals we are accustomed to in non-fiction, Kimmerer, a member of the Potawatomi Nation, writes about the importance of nature to indigenous life – and human life as a whole. She describes the times when plants been critical to the survival of her people, and why we should be thankful for the natural world and fight to save it.

How Black Books Lit My Way Along The Appalachian Trail

Why America’s national parks are so white

Brown Girl on the PCT

I thru hiked the PCT in 2017. I'm a hiker, boulderer and aspiring filmmaker currently working in digital. I live in London, UK so my journey to the trailhead was a long one and planning for my hike was been a complicated affair at times. I'll be writing about my experiences as an international hiker and as a solo female hiker.