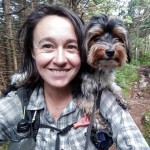 Are you already a PCT lover and an AT hater? Considering a thru-hike and not sure if you should hit the AT or the PCT? Or just want to read something controversial? Take a look at this mostly tongue-in-cheek article and learn why the PCT is so much better than the AT.

I’ve walked over 10,000 miles, including a NoBo PCT thru-hike in 2016 and a NoBo AT hike in 2018. So who better to tell you why the PCT beats the AT every time? Well, probably lots of people, but you’re stuck with me. 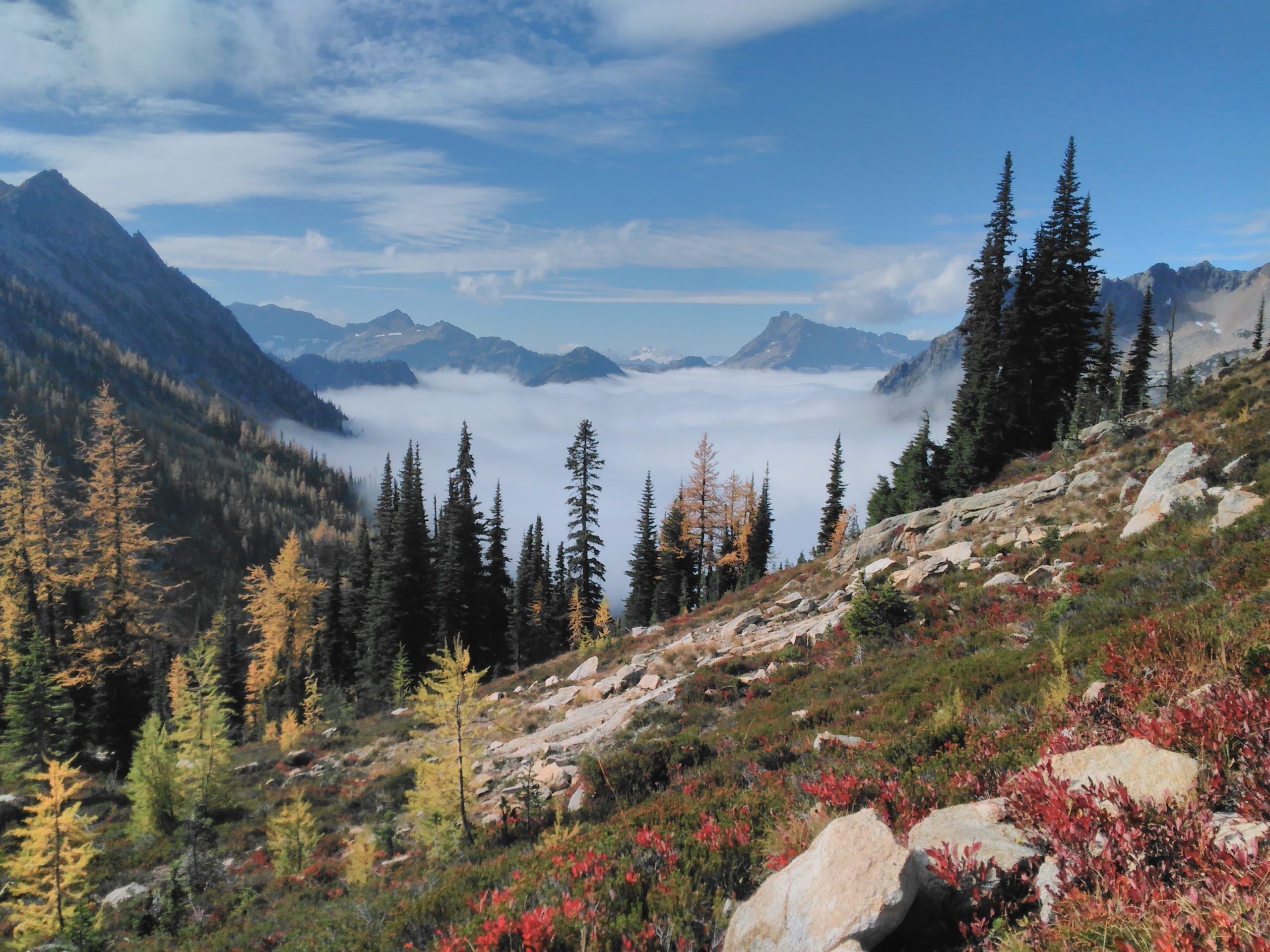 Just your standard day’s view on the PCT.

The AT is pretty famous for being a green tunnel. Where do you get views when everything is tree-covered? On a few balds and fire towers down south, and then in earnest in the Whites, almost 1,800 miles in for a NoBo thru-hiker. Lame! The PCT has great views from day one. You’re guaranteed a pretty panorama every day, and not just at viewpoints.

Think about some of the PCT highlights. San Jacinto, Forester Pass, Kings Canyon, Crater Lake, and Goat Rocks, among others. What are the AT equivalents? McAfee Knob (which lasts maybe an hour if you eat lunch there), the Presidentials, and Katahdin (as long as there are no clouds that day). There’s no denying that PCT views are better. 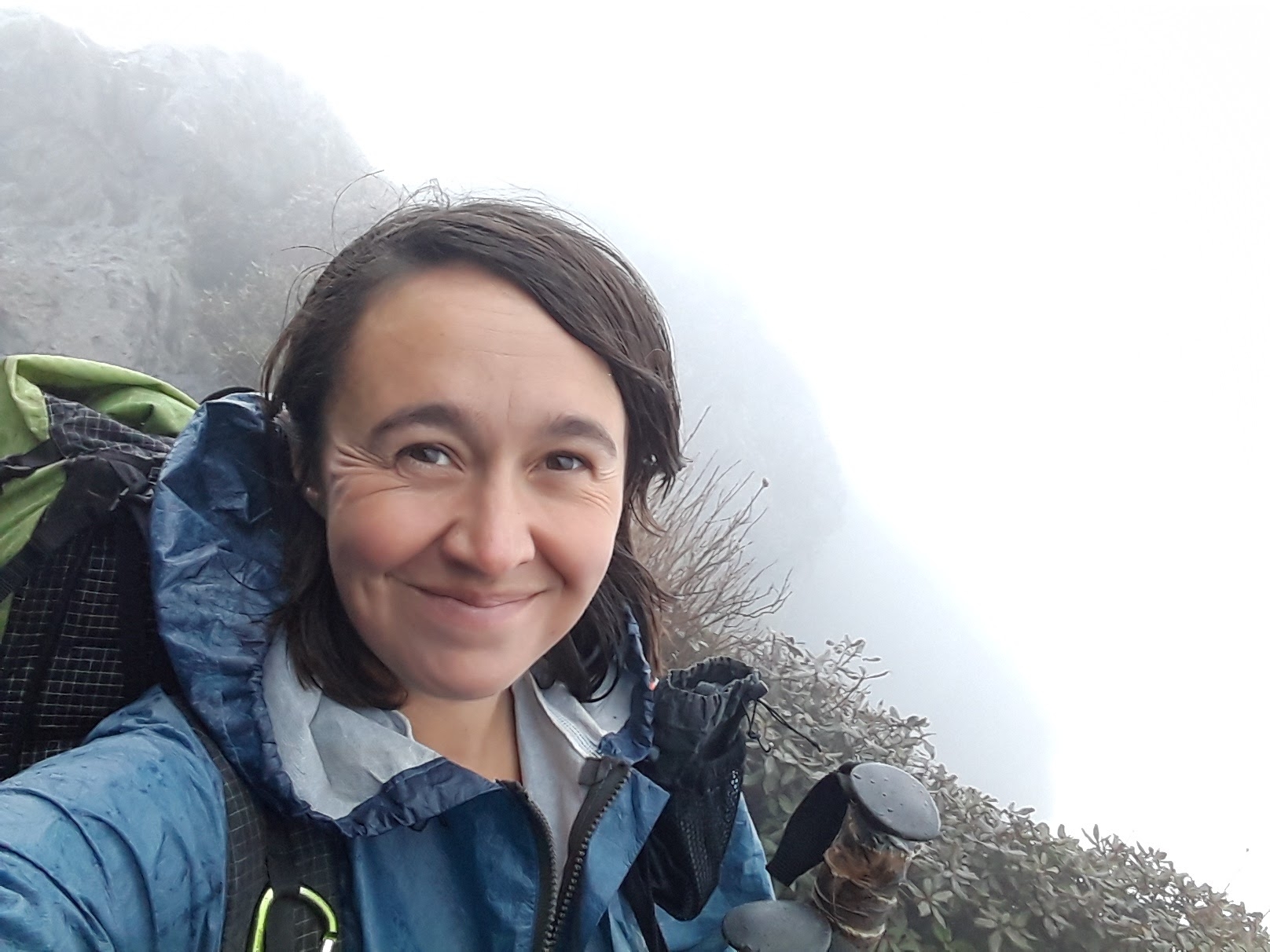 Versus a “viewpoint” on the AT.

The AT mostly sticks to woods and forests. Sure, there’s the occasional lake or swamp, and a few pretty spots above treeline. But for the most part, you’re just walking through the woods for two thousand miles. That gets a bit boring, even if you really love trees.

In contrast, the PCT covers a wide variety of terrain. Deserts, mountains, forests, alpine, rivers, lakes… there are few places the PCT doesn’t go. When the scenery is constantly changing, there’s always something exciting to look at. The PCT spans elevations between 140 ft and 13,000 ft (and you can even take a short side trip to the highest point in the lower 48 on top of Mount Whitney). 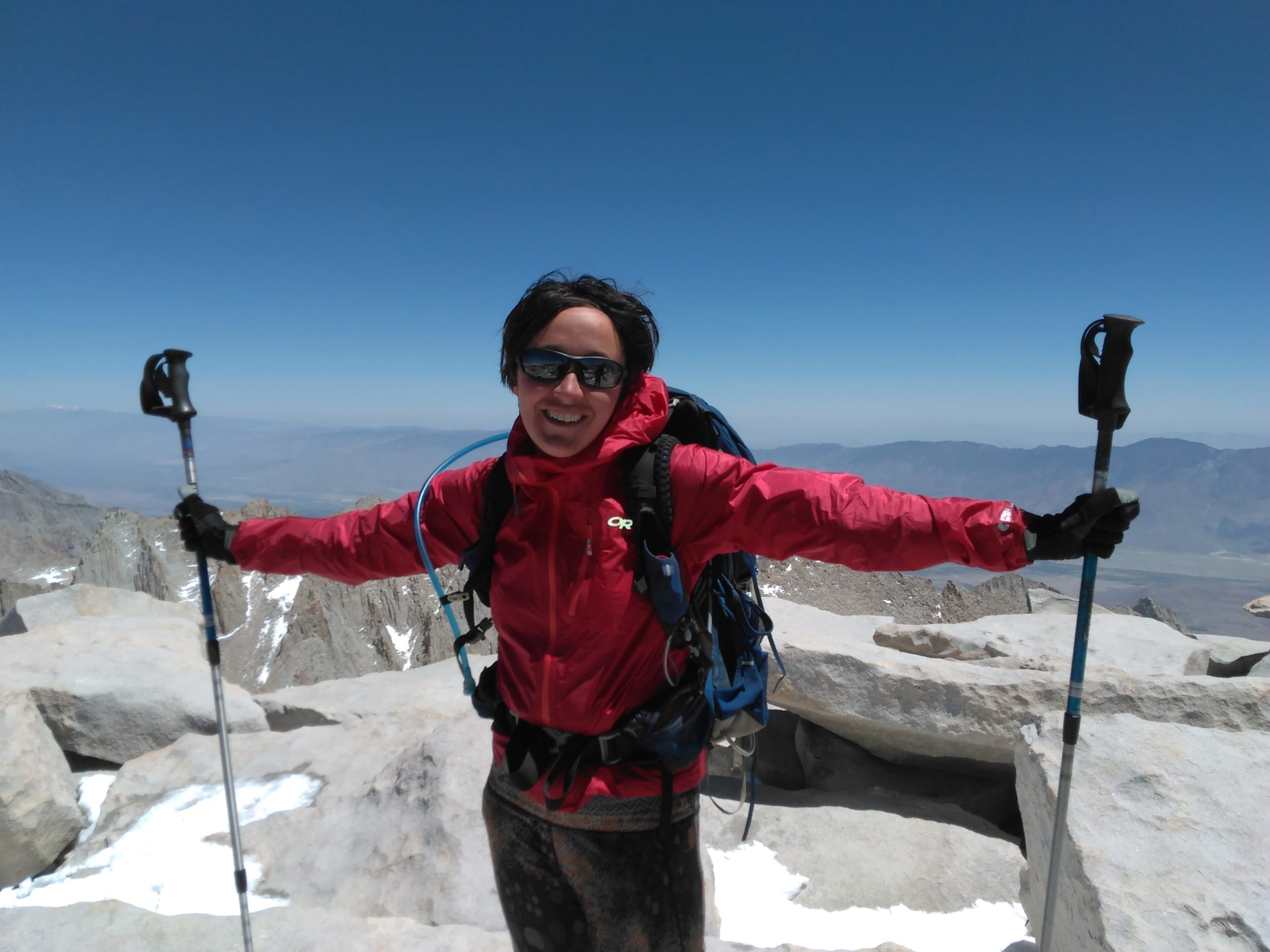 On top of Mount Whitney, the highest point in the lower 48 and just a short detour from the PCT.

3. It’s Always Sunny on the PCT

The AT is a much wetter trail, and early starters will also get the fun of dealing with snow and cold. Hikers can also deal with all of the problems that come along with hiking in wet weather: wet shoes, difficulty drying gear, and plenty of biting insects. 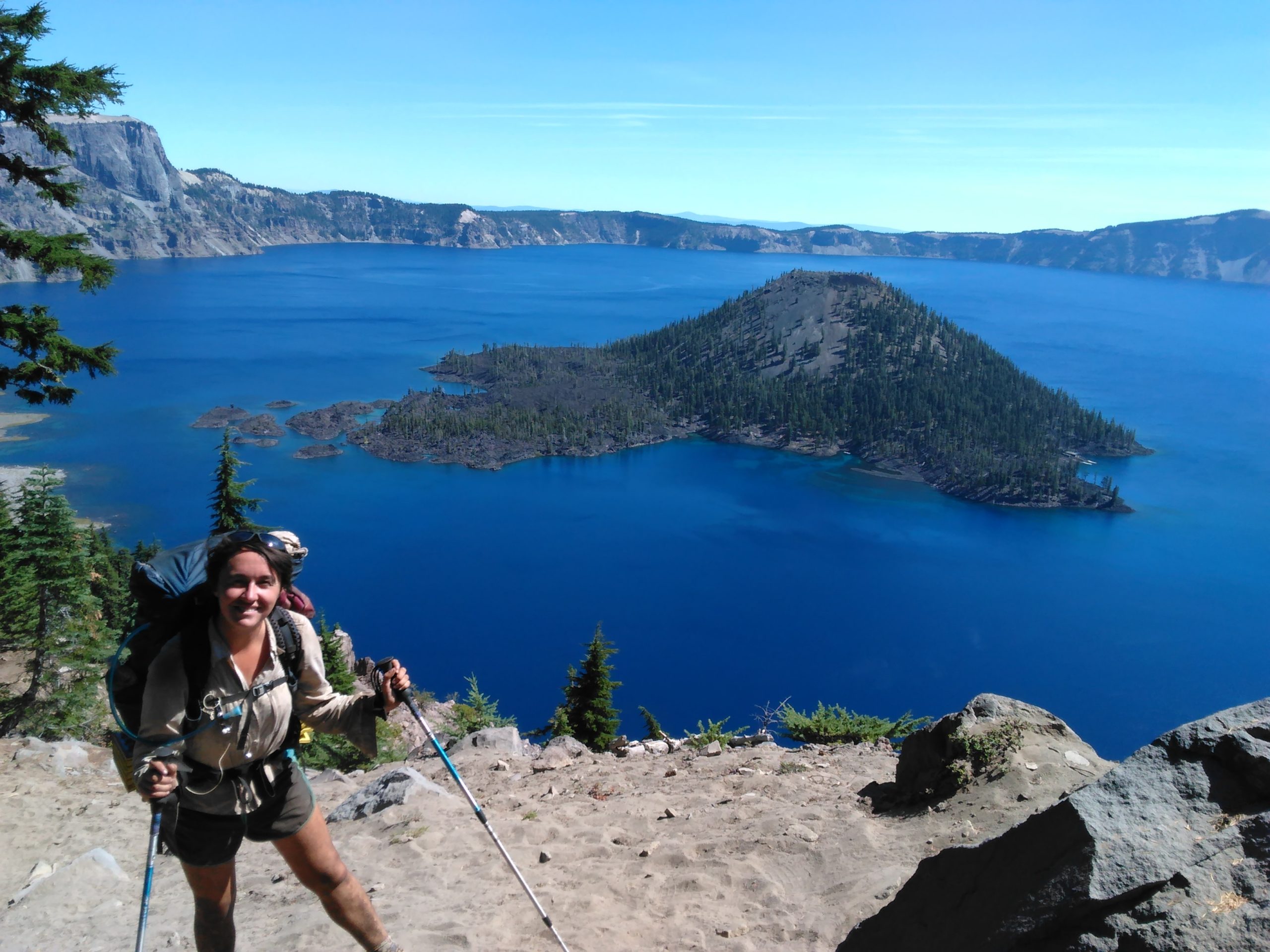 People travel from all over the world to visit Yosemite and Crater Lake National Parks.

4. The National Parks Are Better

People travel from all over the world to visit Yosemite National Park and Crater Lake. Kings Canyon, Sequoia, Lassen, and North Cascades are lesser known but still stunning. The PCT either goes directly through the best bits of these parks, or it’s easy to visit them via an alternate trail (Crater Lake) or an easy hitch (Yosemite Valley).

By comparison, the Great Smoky Mountains and Shenandoah National Park are OK. Sure, they’re nice enough, but they aren’t that different from the rest of the trail. You probably wouldn’t even notice the difference if you didn’t have to worry about permits. 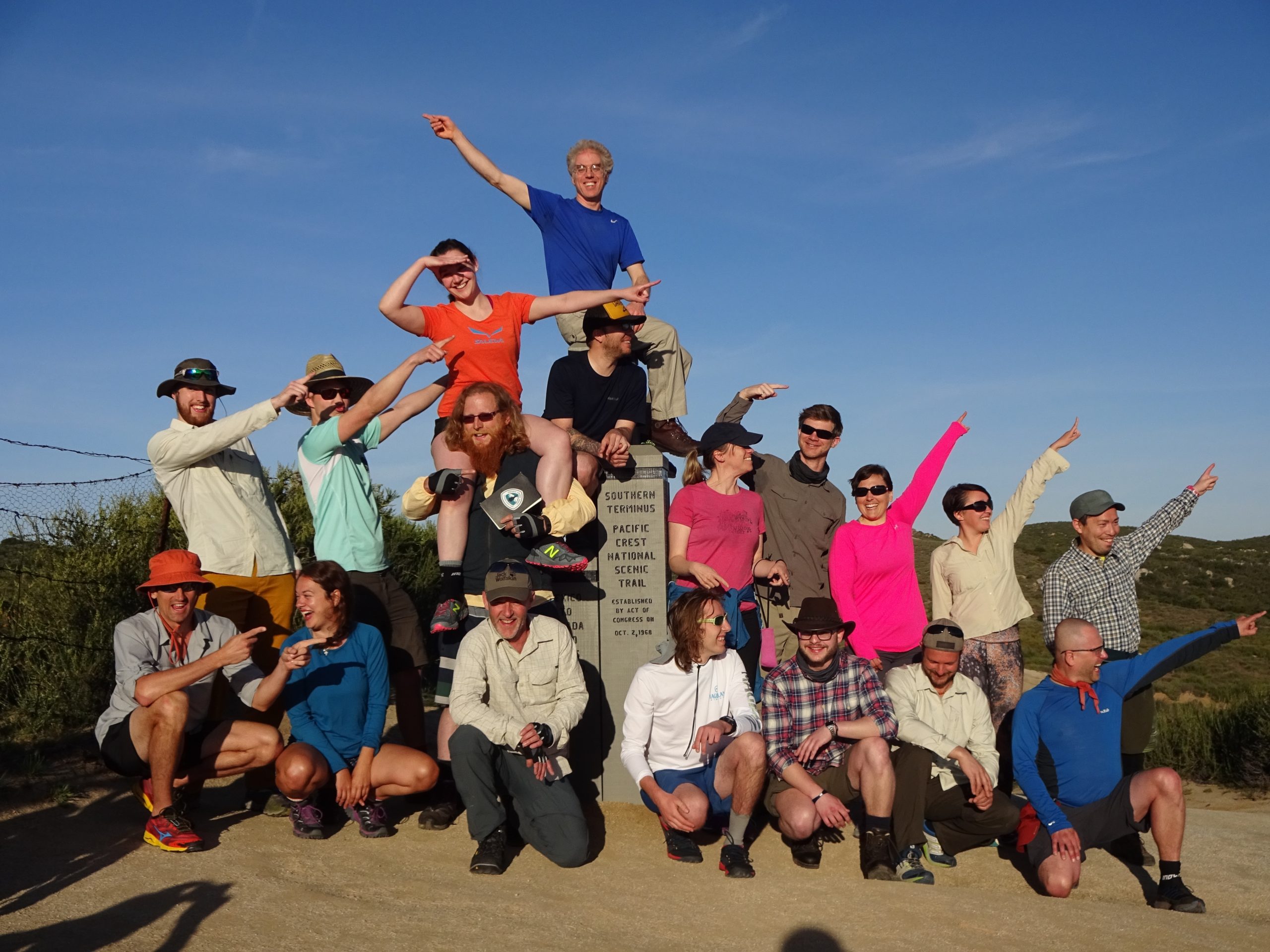 Still friends with hiker trash six and a half years later.

5. The People Are Better

Trail people are amazing no matter where you find them. But I met my husband on the PCT, and I’d like to stay married to him, so I can’t argue that the hikers on the AT are better. I’ve met fantastic people on both trails, most of whom I’m still great friends with years later.

I find that trail families and trail friendships are stronger on the first trail you hike. I hiked the PCT first, so my trail family was much more important to me on that trail. If you hike the AT first, you’ll probably have the opposite experience. 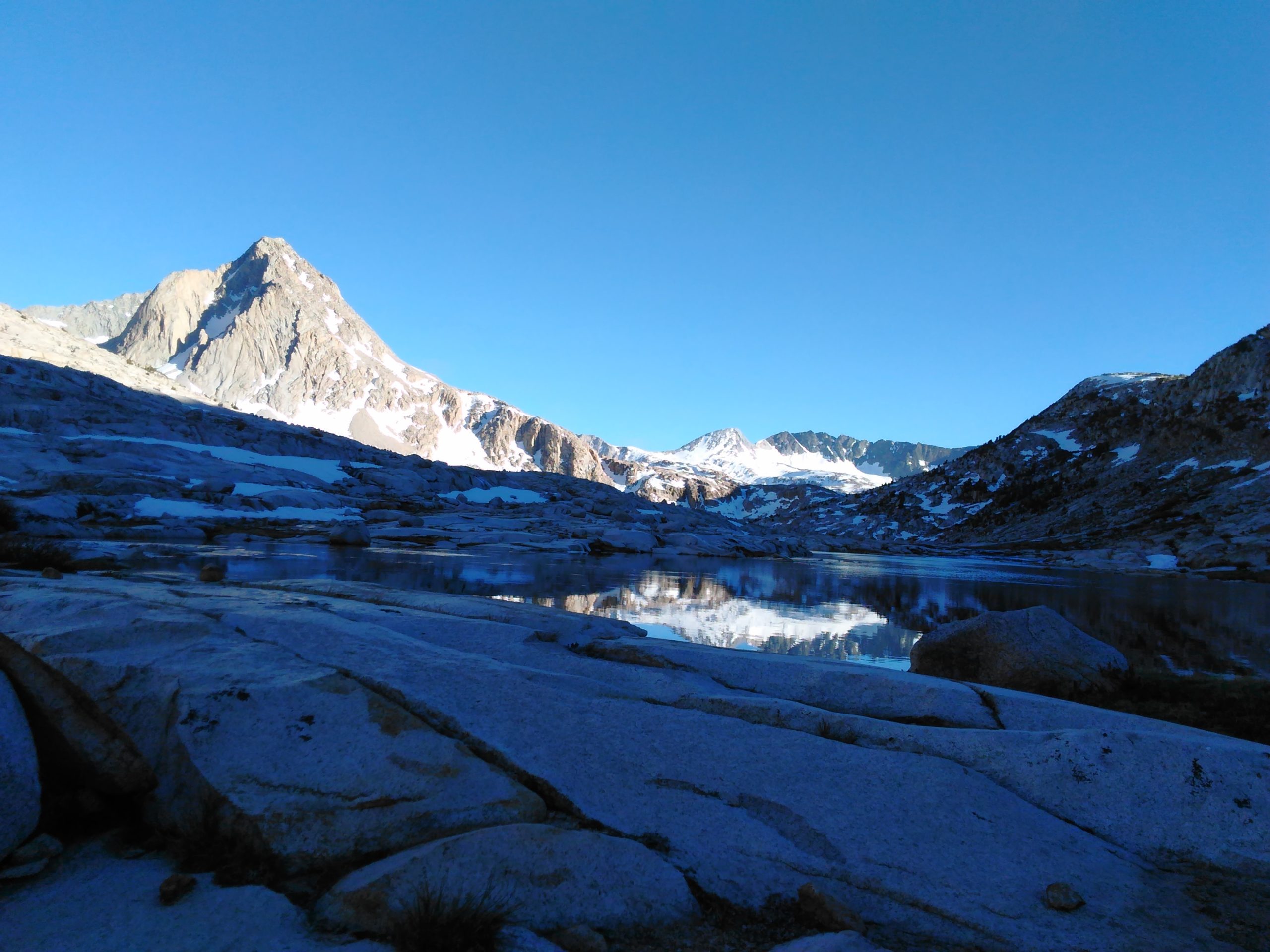 Even awful Sierra mozzies are still better than AT bugs.

The PCT is a fairly dry trail, which means you will encounter fewer mosquitos and other biting insects. This isn’t always the case: the Sierra Nevada can be particularly brutal for NoBo hikers who will need bug head nets and plenty of repellants. However, the desert and many of the more northern sections are dry enough that hikers can cowboy camp without being bothered by bugs.

Mosquitos are annoying, but even worse are Appalachian Trail ticks. Hikers on the AT normally spray clothes and gear with permethrin to avoid these awful creatures, and you can potentially catch Lyme disease if you’re bitten. Ticks are around on the PCT too, but to nowhere near the same extent as on the AT. 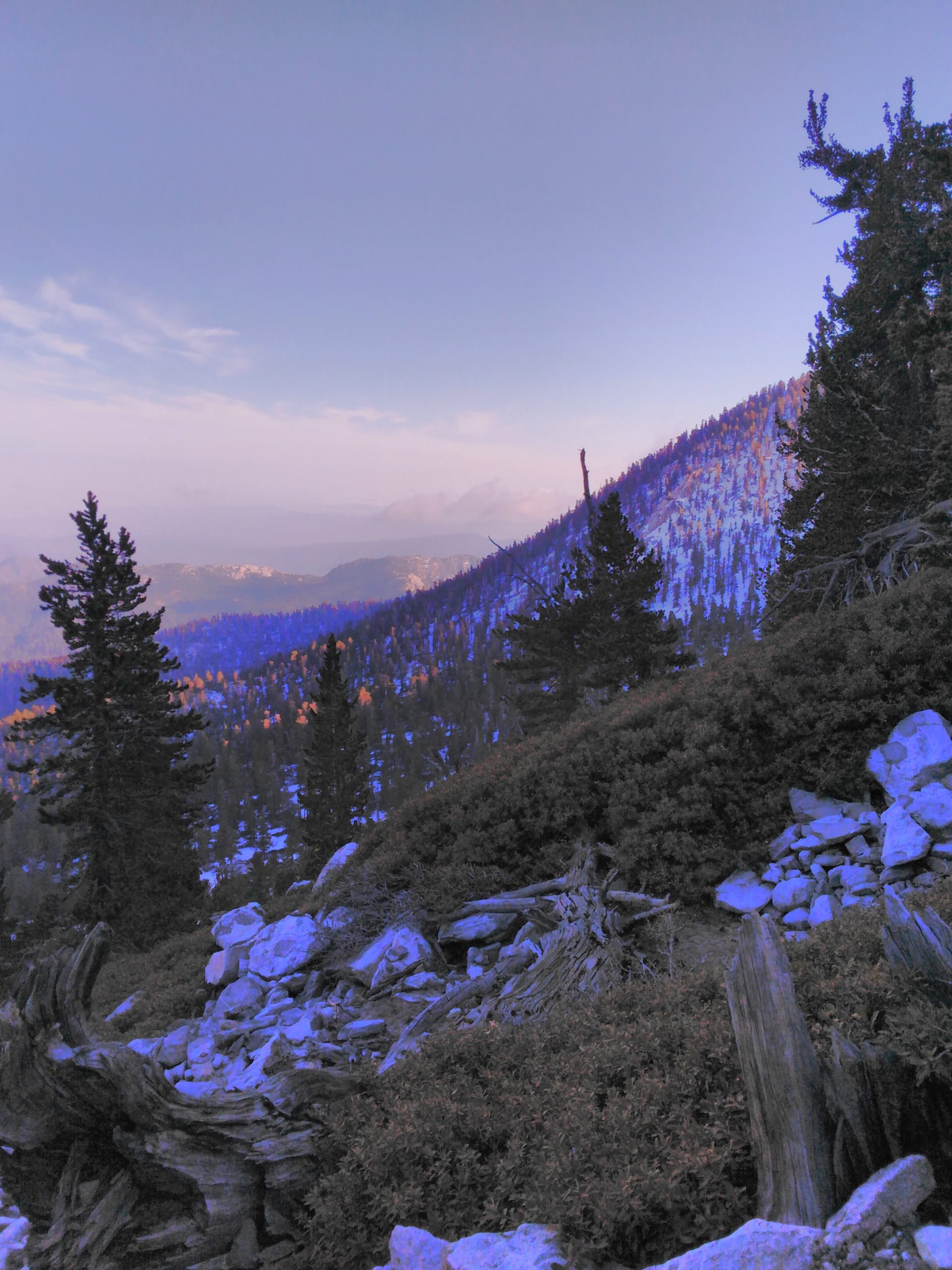 Gorgeous quiet trails are yours to explore on the PCT

Thru-hiker numbers for 2019 (the most recent year that this data is available for) paint an interesting picture. The Pacific Crest Trail Association issued 4,748 northbound permits, while the Appalachian Trail Conservancy estimates 3,300 people started the AT NoBo. This isn’t quite comparing apples to apples: not everyone who gets a PCT permit will actually show up to hike. However, it suggests that the numbers of thru-hikers on both trails are fairly similar.

So then, why does the PCT feel so much quieter? The AT sees an estimated three million visitors a year—many of whom are out for weekend, day, or section hikes and are therefore not included in thru-hiker numbers. The PCTA doesn’t track estimated total visitors, but with more remote sections of trail and a more challenging permit system in national parks, it’s easier to avoid non-thru-hikers on trail. The desert can be crowded, but once you get away from the bubble, there’s plenty of solitude.

The AT also has a reputation as a party trail. We’ve all heard stories about bad behavior at Trail Days or hikers yellow blazing up and down the trail from party to party. Is that going to be your experience if you hike the AT? Probably not, unless you want it to be. It’s easy enough to avoid if you start early, late, flip-flop, or SoBo. However, that reputation is there, and many thru-hikers won’t even consider the AT because they don’t want to be associated with it.

The PCT still has plenty of opportunities to party. There are a few notorious trail angel spots, Belden music festivals, or just a bar in town. But it’s easy to hike past if that’s not your scene.

By exciting, I mostly mean in a sweaty-palms, adrenaline-fueled kind of way. Kicking steps in the snow on Forester Pass, balancing on the sketchiest log crossing over South Fork Kings River, or fording a belly-button-deep Evolution Creek are some of the most memorable events from my PCT thru-hike. What’s the AT equivalent? Oooh, I had to climb a ladder at one point. So exciting. Sure, I might have been so scared I wanted to throw up before Forester Pass, but that’s what good memories are made of. 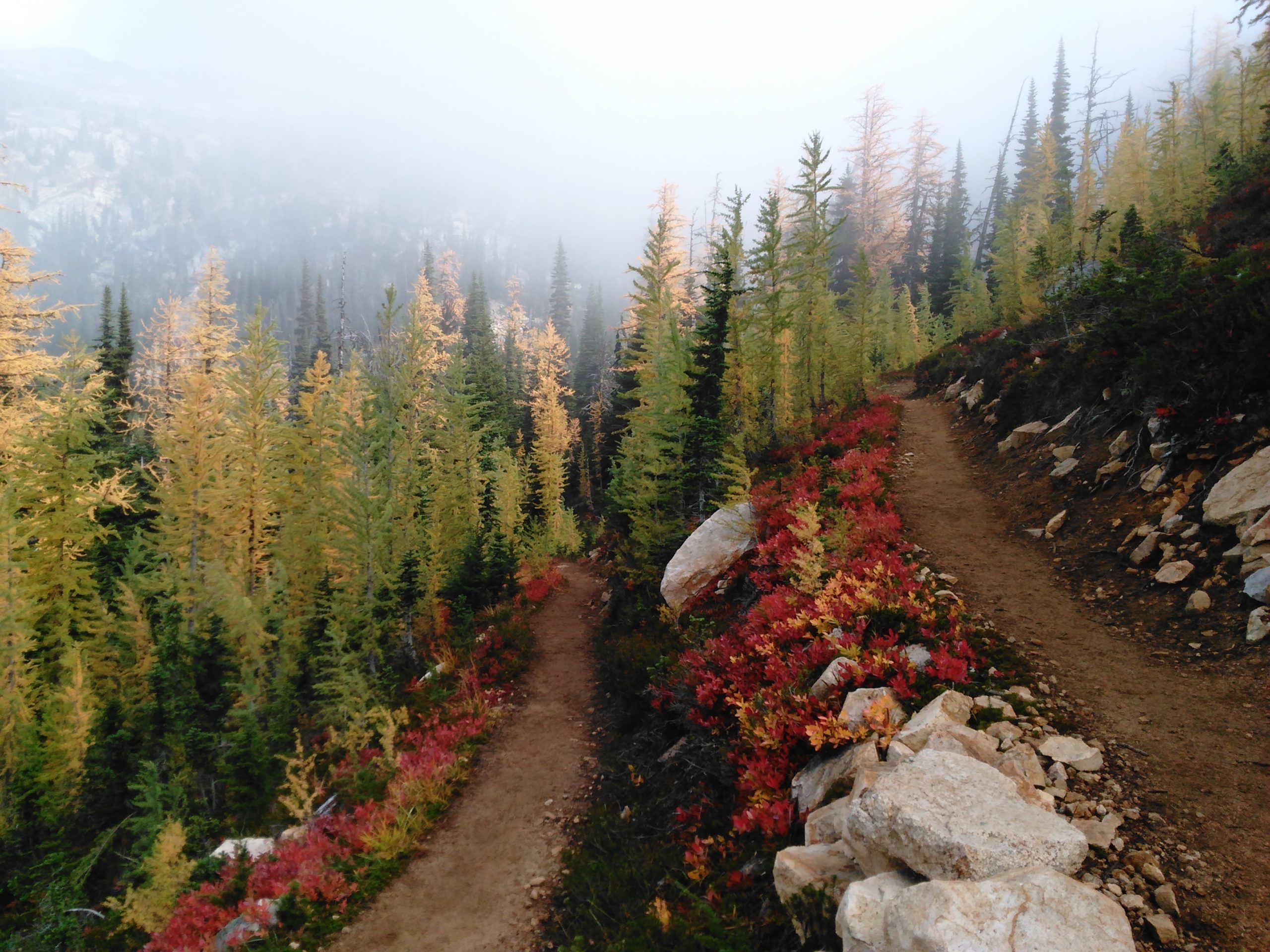 PCT switchbacks are the best.

It’s difficult to measure how hard a trail is. You need to take into account both physical and mental difficulty. The PCT is mentally more challenging than the AT by far in terms of the need for technical know-how and good logistics. There are very few places on the AT where you have to worry about water, resupply, or skills like snow travel or river crossings. Food carries on the AT are shorter, and your backpack will be lighter without a bear canister.

Physically, the terrain of the PCT is a little more straightforward, although no thru-hike is ever easy. The AT isn’t so tough to hike, except for about 300 miles of some of the hardest hiking you will ever do in the White Mountains and Maine. The AT goes straight up and down, whereas the PCT has nice, gentle switchbacks. The AT just edges out the PCT in terms of physical difficulty.

Both the PCT and the AT lose to the CDT in terms of the overall challenge. Wild and remote, the Divide has dangerous wildlife, terrifying weather, awful snow, and challenging navigation. If you’re looking for a difficult trail, the CDT is best of all. 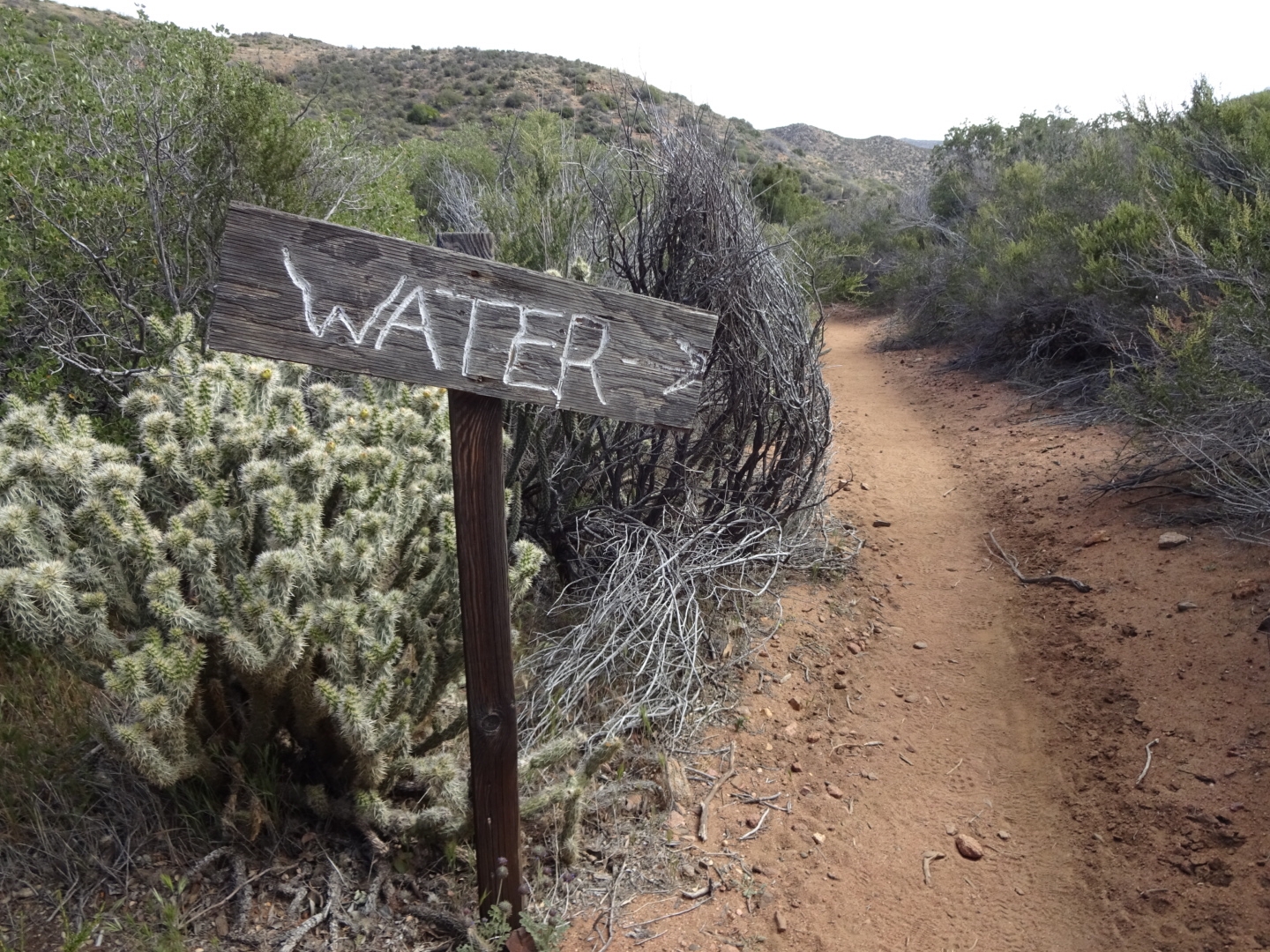 Water is a bit tougher to access on the PCT.

10. But Also, You Get to Hike for an Entire Summer

Honestly, it doesn’t matter if you chose the AT or the PCT. Both are a lot of fun, even though they’re very different. What is more important than the trail is being outside all summer, meeting cool people, and having an awesome time walking thousands of miles. So, whether you’re an east coast aficionado or a firm believer that the west coast is the best coast, go take a hike. You won’t regret it, regardless of what trail you’re on.