The John Muir Trail extends 211 miles through the exquisite backcountry of the High Sierras.  This statement alone may be all the coaxing you need to make your way to California.  But, just for good measure, here are another six reasons to hike the JMT.

No, seriously — it is.  In 2015, requests for JMT permits through Yosemite’s National Park Service saw an increase of 165% over the previous year.  In the spring, the YNPS’ web page posted the following announcement, “Note: Due to high demand, approximately 90% to 95% of all John Muir Trail through-hike permit applications are denied.”

Hikers can request permits up to 168 days (or 24 weeks) ahead of when they’re hoping to start their hike.  Via fax (!!).  60% of available permits for each trailhead are released up to six months in advance, with another 40% held for day of walk-up permits.  Needless to say, the competition is fierce, and each year hikers fire up fax machines for the first time since the 90s to try their luck. 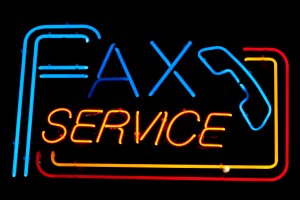 Though the permitting lottery system certainly adds a level of uncertainty and frustration to planning a JMT hike, it’s there for good reason.  The system limits the number of hikers traveling along the corridor of the JMT in an effort to reduce human impact upon natural resources and the fragile environment.   Permits also work to maintain the wilderness experience, allowing space for solitude on the trail.

From Reds Meadow to Whitney Portal there are no direct road crossings, including 149.2 miles of the official JMT and an additional 10.6 miles from the summit of Mt. Whitney to Whitney Portal.  That’s a whole lot of uninterrupted wilderness; an experience even seasoned long distance hikers will likely find foreign, as most other long distance trails cross roads at more regular intervals. 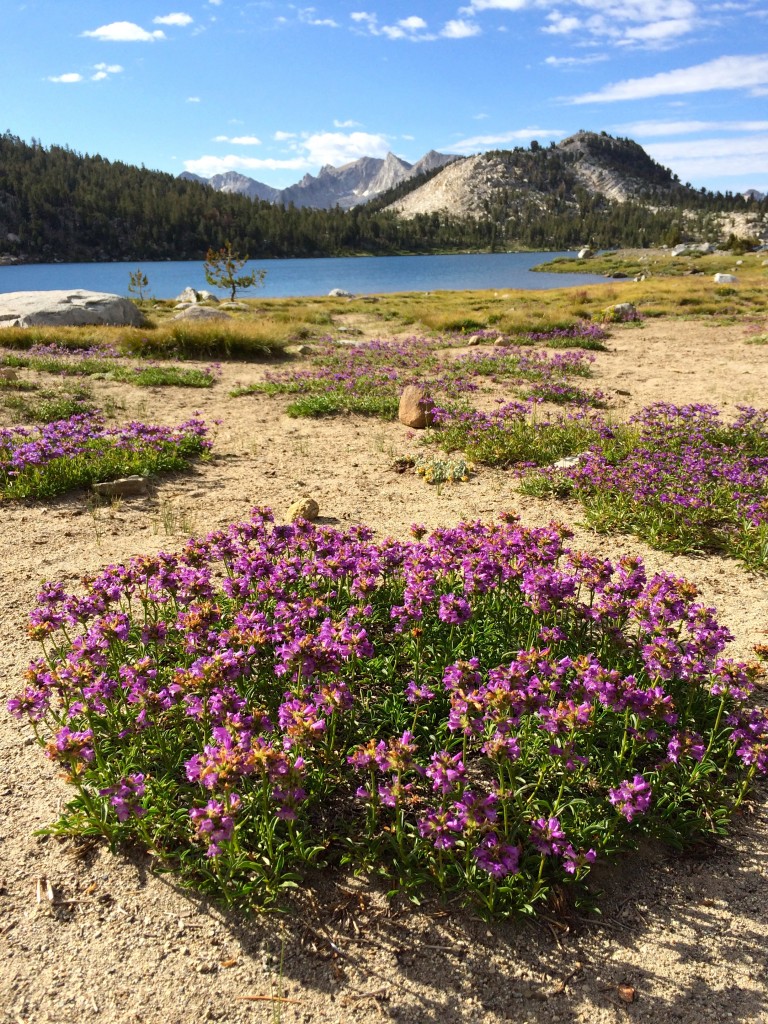 You won’t find any road crossings near Lake Virginia… 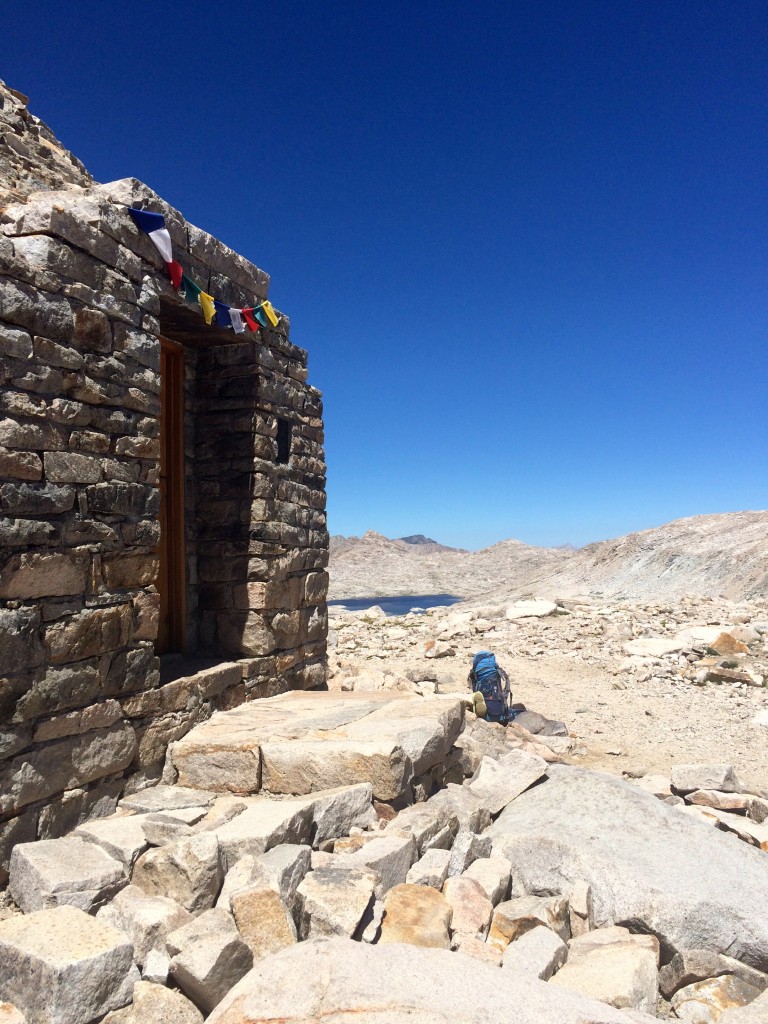 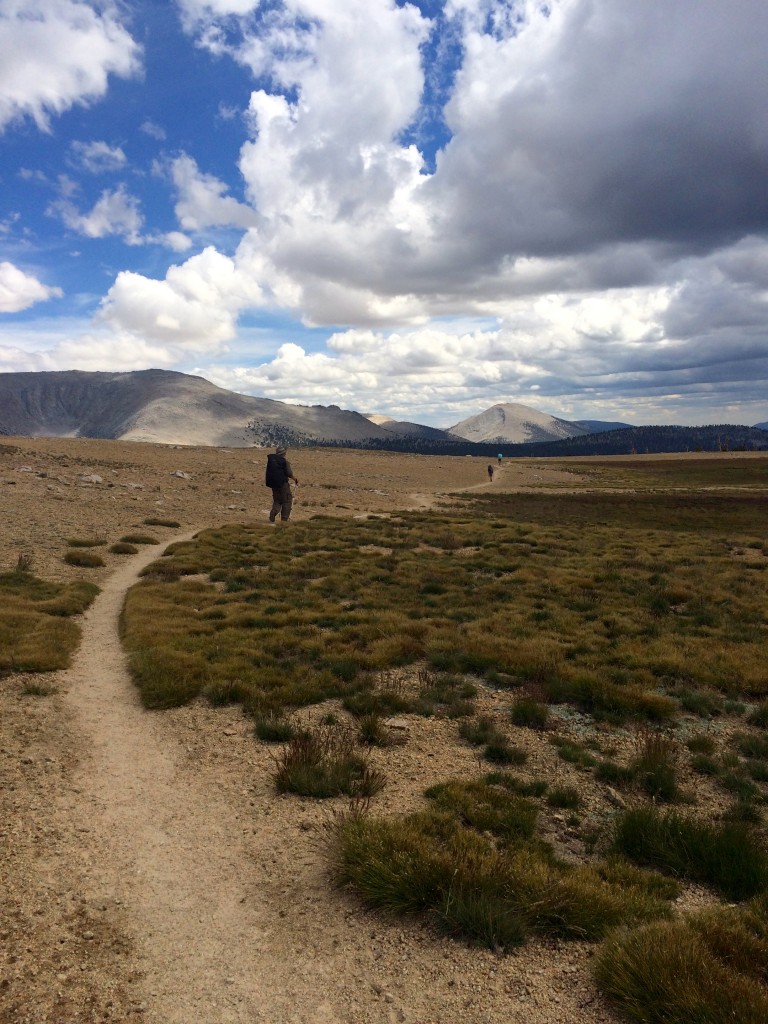 …or on the last leg toward Mt. Whitney.

The civilized world becomes an anomaly, so much so, that when night hiking up Mt. Whitney, you’ll stop to marvel at the twinkling lights of Lone Pine in the distance.  The stunning stars overhead have lost none of their luster, but this moment makes you realize the wilderness you sought out is no longer unfamiliar.  Nature has become the norm, civilization the novelty.

Water abounds on the JMT, even in dry years.  Water sources are typically 2-5 miles apart, with the longest gap lasting only 9.2 miles. Few hikers find the need to carry more than two liters of water at a time.  There are many who argue that water at the JMT’s average elevation need not be treated.  Erring on the side of caution (especially after watching a pack mule relieve himself directly into a creek), you may find it worth your while to treat your water. 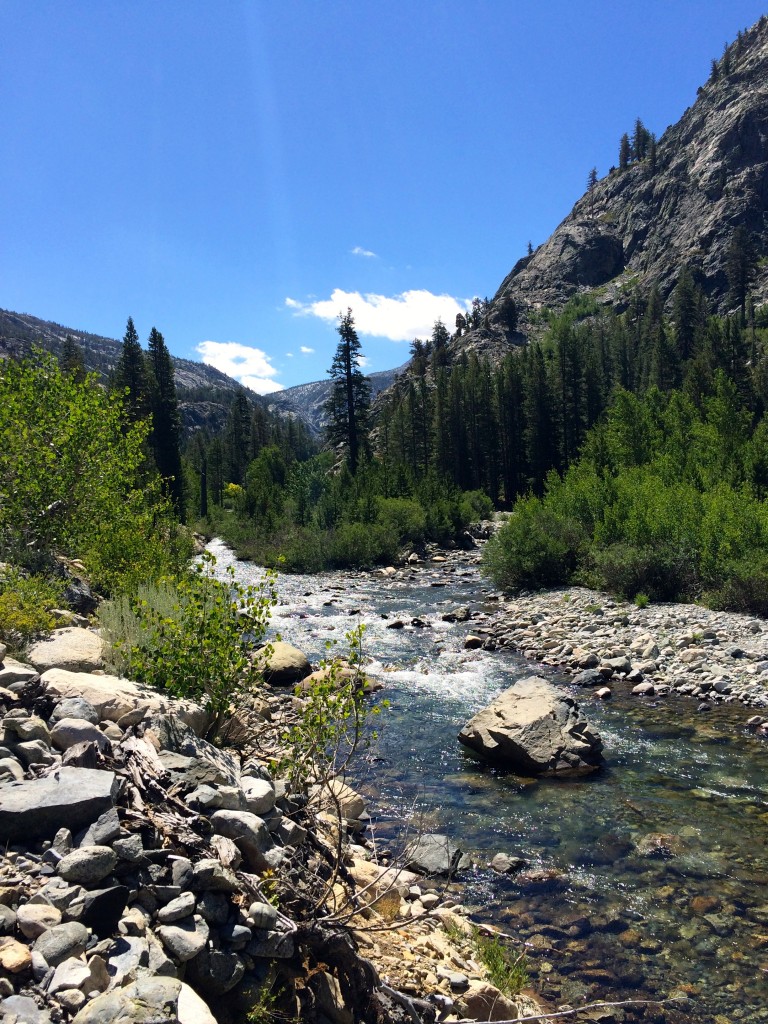 The South Fork of the San Joaquin in Kings Canyon. 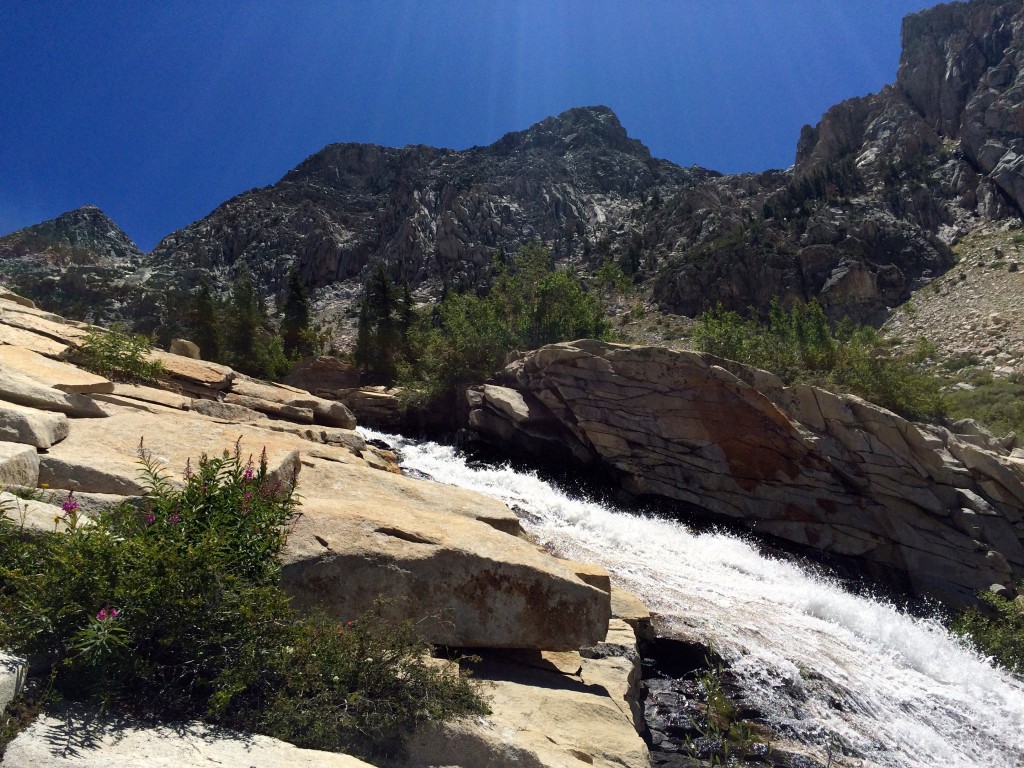 The cool cascades of Palisade Creek will taunt you as you ascend the Golden Staircase.

Another refreshing way to enjoy the water on the JMT?  Jump in! Thanks to a combination of snowmelt and cool night time temperatures, even in the middle of summer, shrieks (and shrinkage) are followed in short order by welcome relief at the end of a long day under the sun.  The water is so prolific in many sections along the JMT that several tarns remain unnamed. 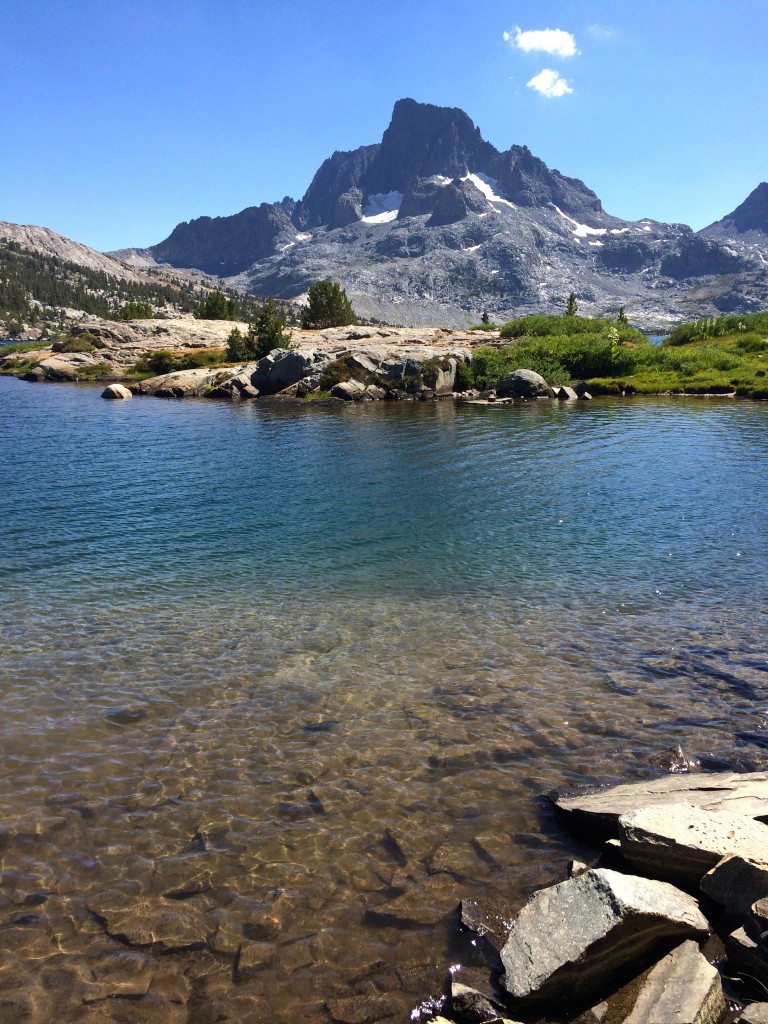 It’s tough to choose favorites on the JMT, but Thousand Island Lake is in the Top 5… 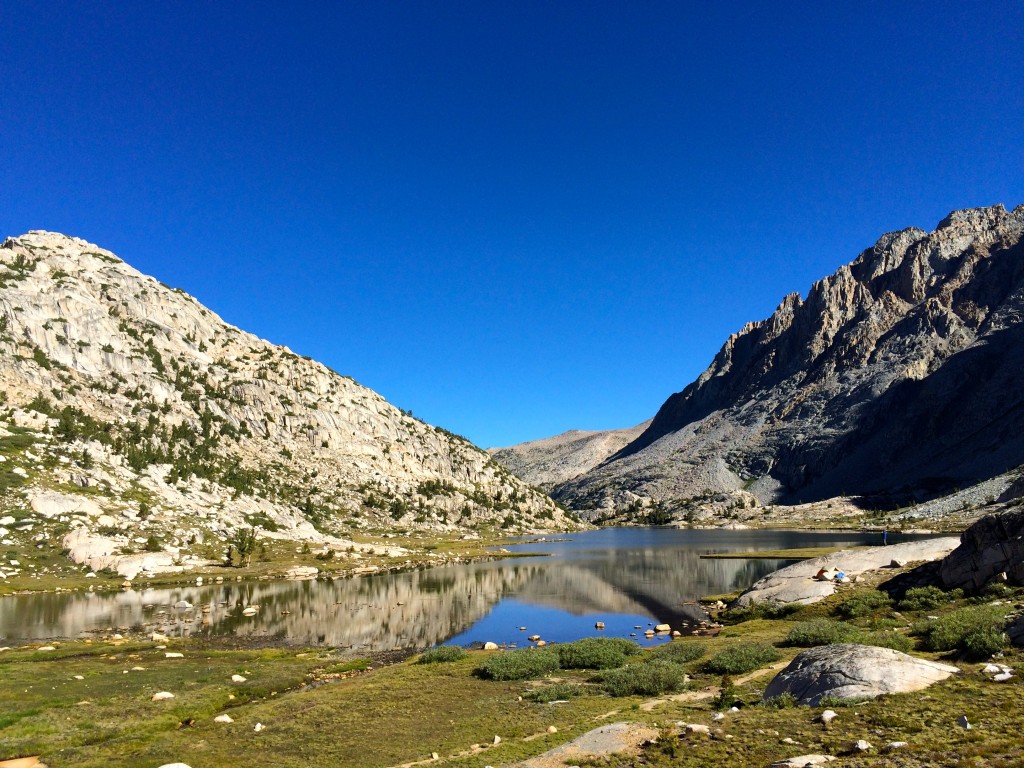 …and the entirety of Evolution Basin… 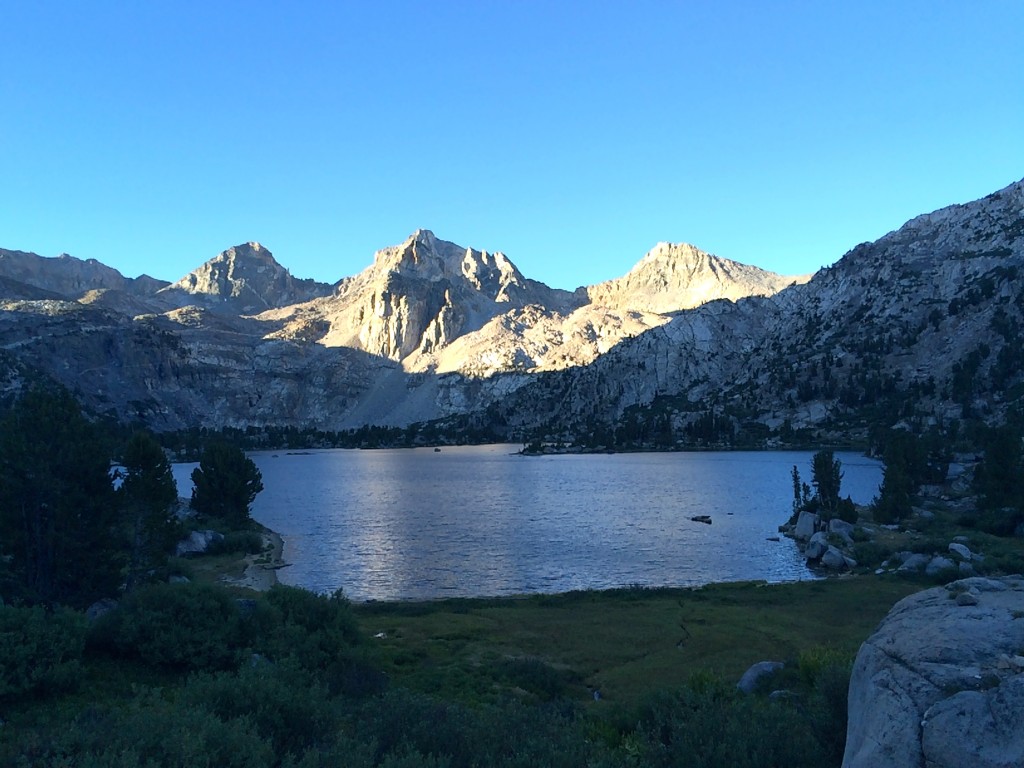 If cold is not your thing, maybe hot is.  The JMT also boasts several hot springs close to the trail.  Making conversation with the locals at Reds Meadow may well get you the intell needed to enjoy hot springs and a cold beverage from the camp store simultaneously. And for those that hit the Muir Trail Ranch following a low snow year, the river ford to the hot springs is wide, but manageable, and worth every slippery step.

And the fish.  Well, they’re enough for another post entirely.

Due to sparse road crossings and lengthy side trails to exit the JMT, resupply options are limited.  Without question, the most unique option is the pack mule.  These animals are the very reason the JMT and PCT are carved at such a pleasant grade, allowing mules and horses to navigate the entirety of each trail.  This is particularly important on the JMT, as mules remain the primary means of carrying food, tools, and supplies into the High Sierras. 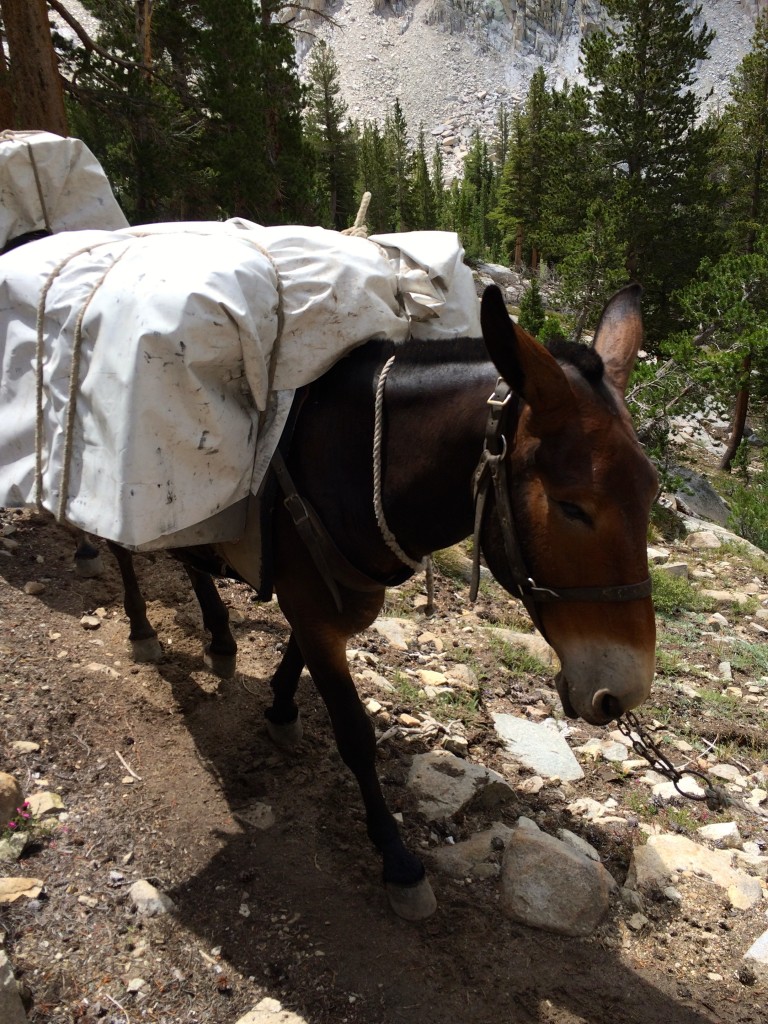 Whether you opt for the personal pack mule delivery at the top of a pass (fancy pants!), or send a bucket to the Muir Trail Ranch, a pack mule remains at the heart of the operation.  The Muir Trail Ranch’s premium price of holding a bucket for you ($70) is somewhat more justified upon learning of the intricate trajectory of a food bucket: post office → driver → ferry → pack mule → Muir Trail Ranch → YOU (not to mention free reign over the most abundant hiker boxes of all time).  The mule trains are an impressive and essential cog in the wheel of the John Muir Trail. 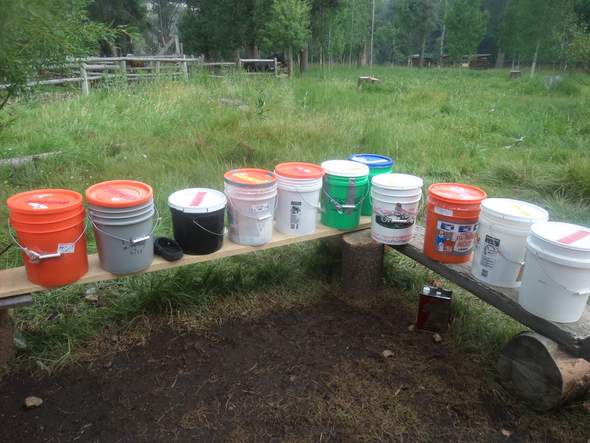 Just a sampling of the surplus hiker buckets you can dip into if you’ve paid to pick up a bucket at MTR. (photo courtesy of https://www.trailtosummit.com)

In 2014, Yosemite was ranked third in the Top Ten Most Visited National Parks by National Geographic.  A staggering 4 million visitors make their way to Yosemite each year.  Bearing this in mind, starting your hike in Yosemite certainly sets the bar high for beauty. And yet, somehow, each successive day is more beautiful and majestic than the one before.

Yosemite. Not a bad way to get started.

The landscapes are ever changing, from arid desert, to raging rivers, to towering mountains, to aquamarine lakes, to rocky slabs, to lush wildflowers.  From waking to a world covered in frost and blanketed in clouds, to fierce blue skies under a sultry sun.  From the top of each pass as your eyes trace the path you’ve walked and the meandering mystery that lies ahead.  Even a bathroom break in the middle of the night can take your breath away, as you peer into the sea of stars that pierce through the inky sky. 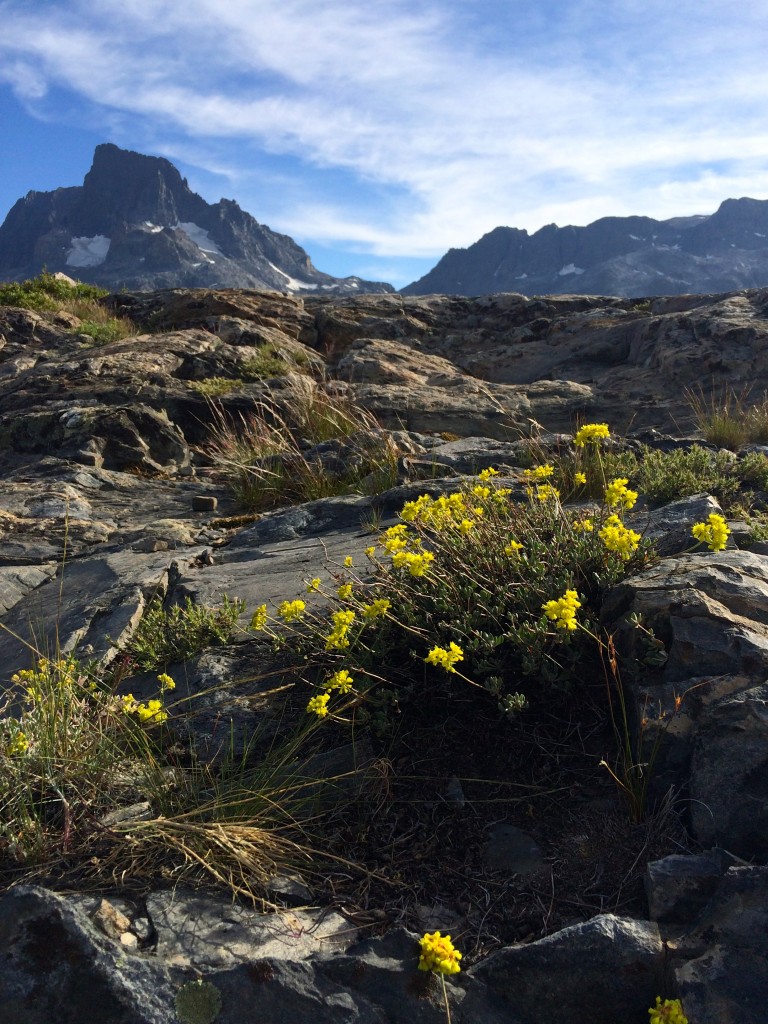 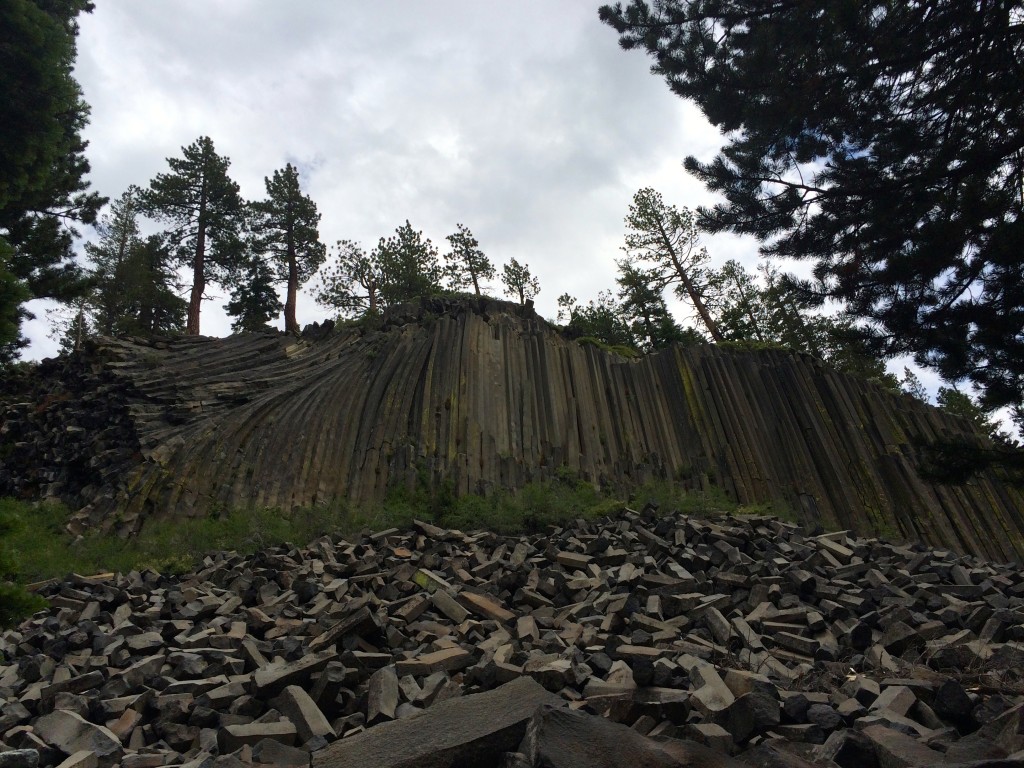 Devils Postpile National Monument is just a hop, skip, and a jump away from the JMT. 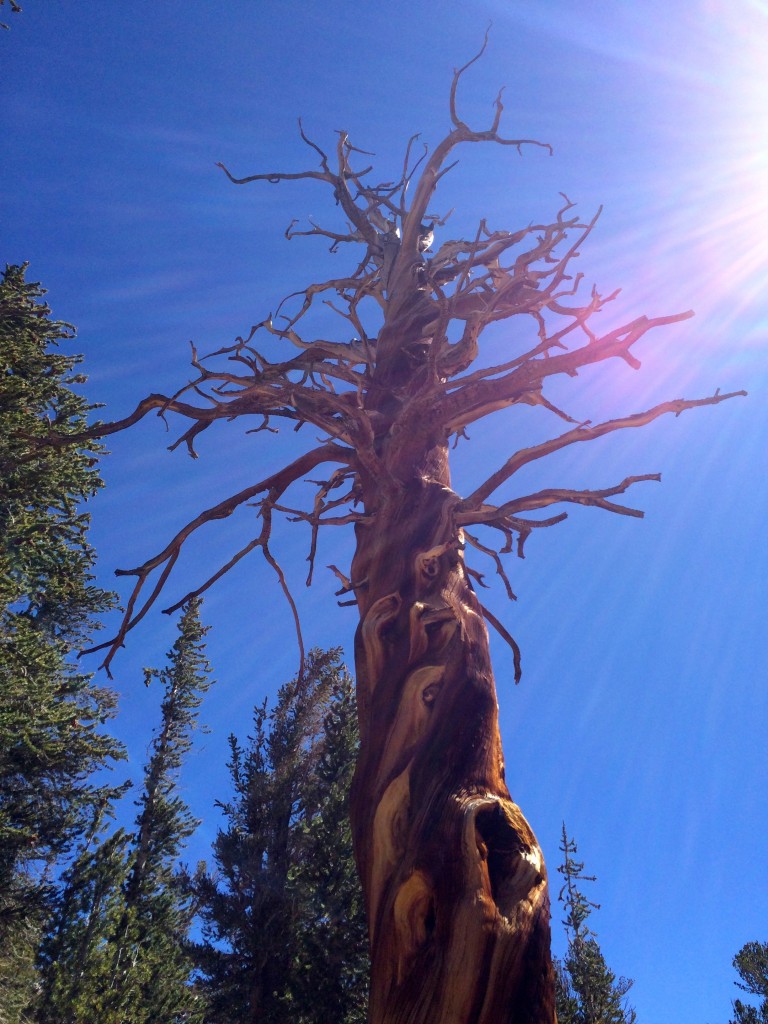 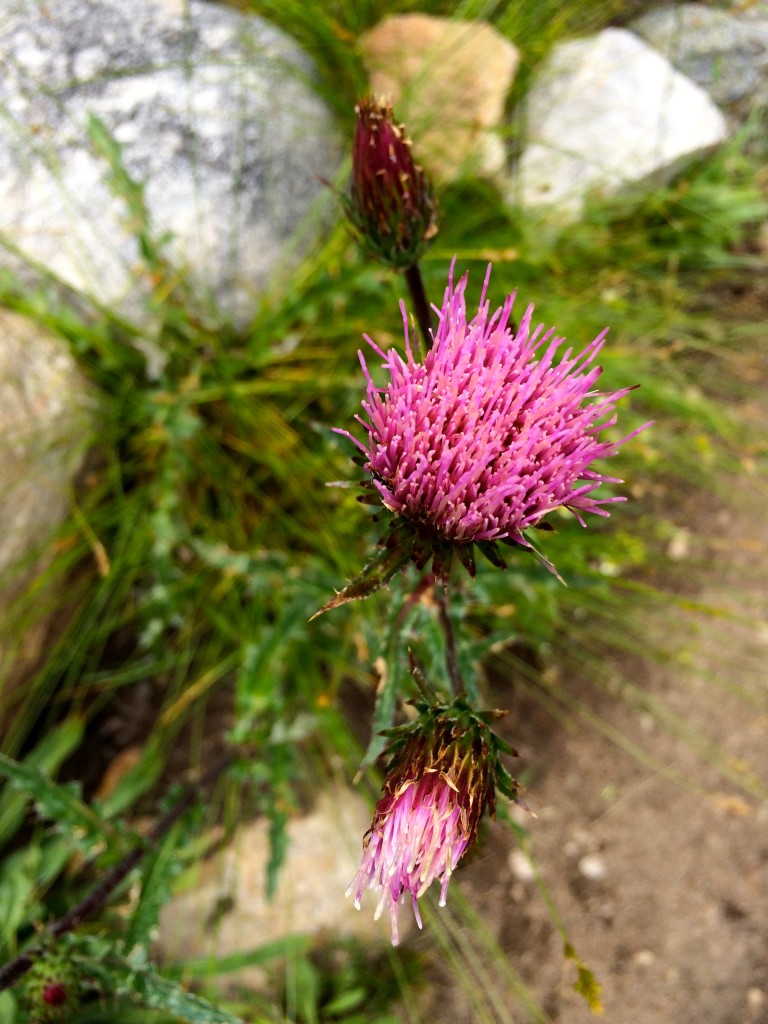 Did I mention the wildflowers? 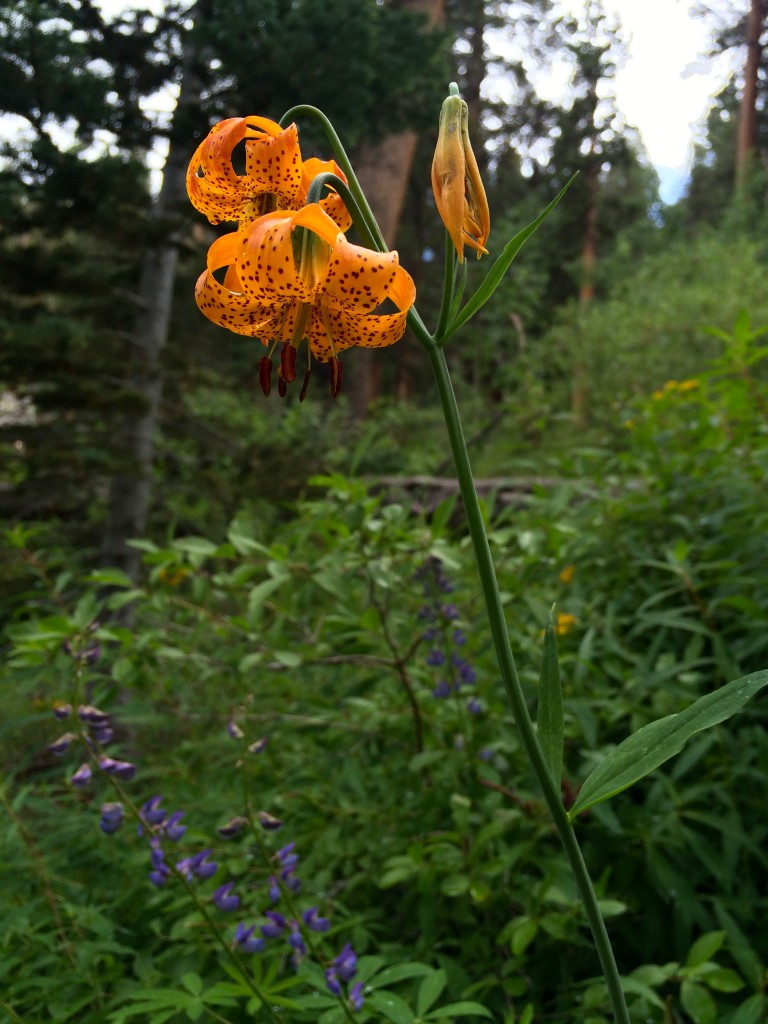 Seriously though. I never knew if I should be looking at my feet or up toward the mountains. Beauty overload.

The world looms large in the High Sierras providing a gentle reminder of our diminutive size in the grand scheme of things.  Here, nature is the unequivocal king and we, the hikers, a lucky bunch of jesters passing through. 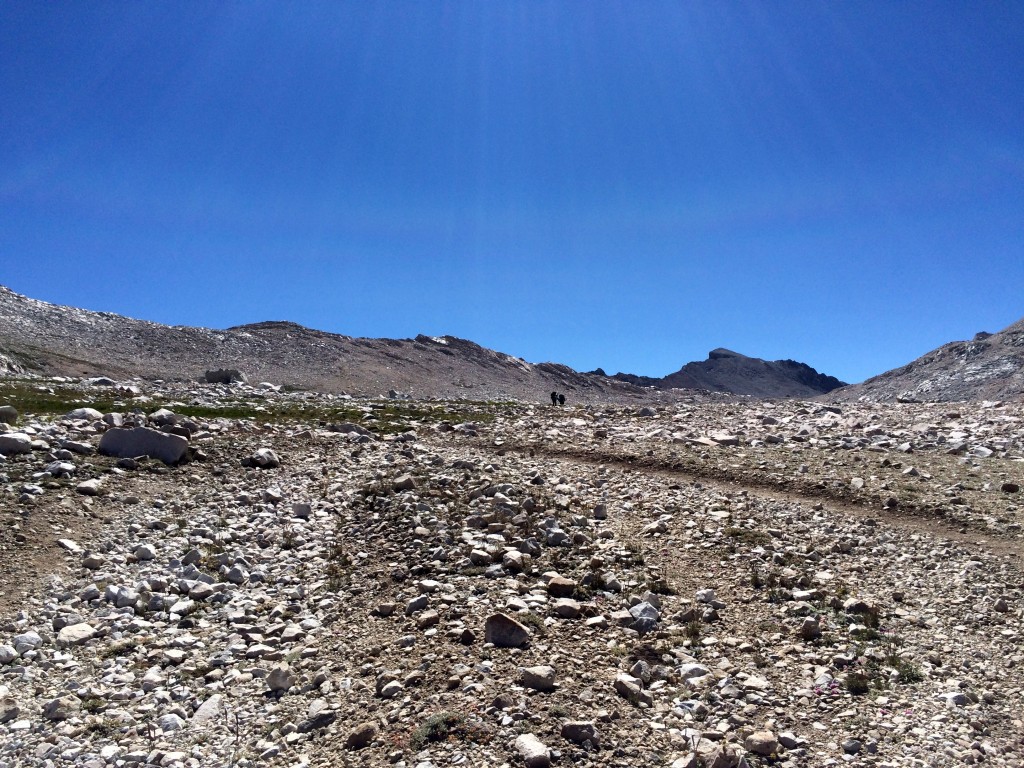 I spy with my little eye: a couple of hikers making their way up Muir Pass. So tiny. 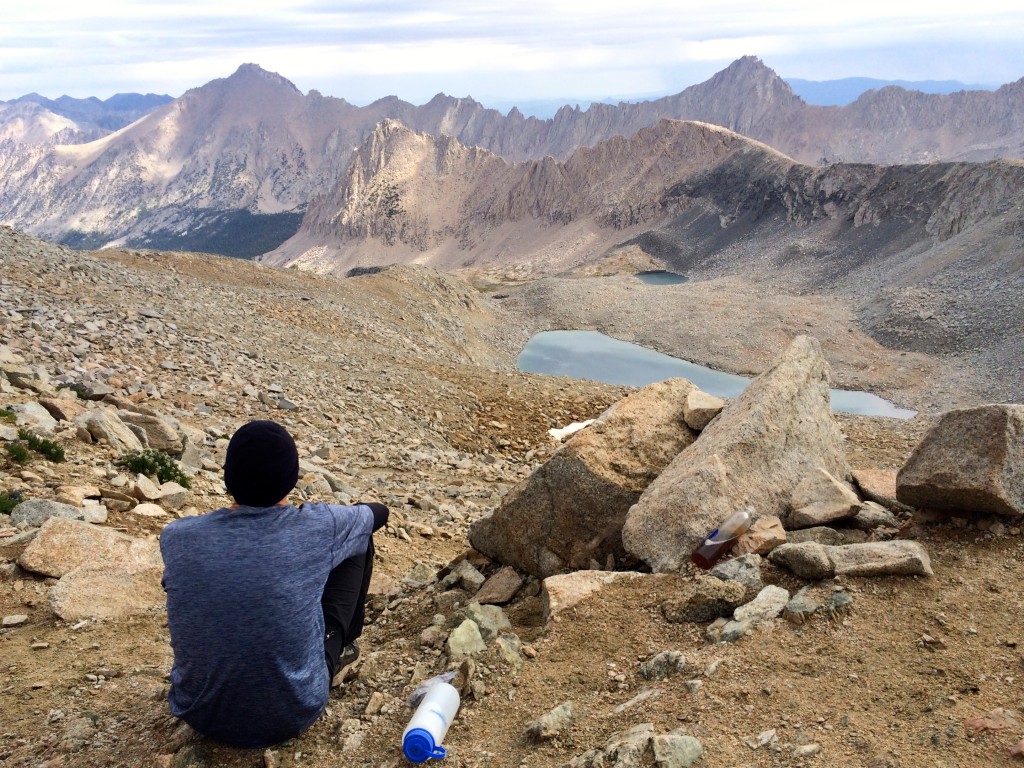 At 14,505 ft., Mt. Whitney is the tallest mountain in the lower 48 states.  A longstanding tradition among JMT hikers is to this tackle this final climb in the nascent hours of the morning in order to catch sunrise from the top.  It is a transcendent experience worthy of an early wake-up call. 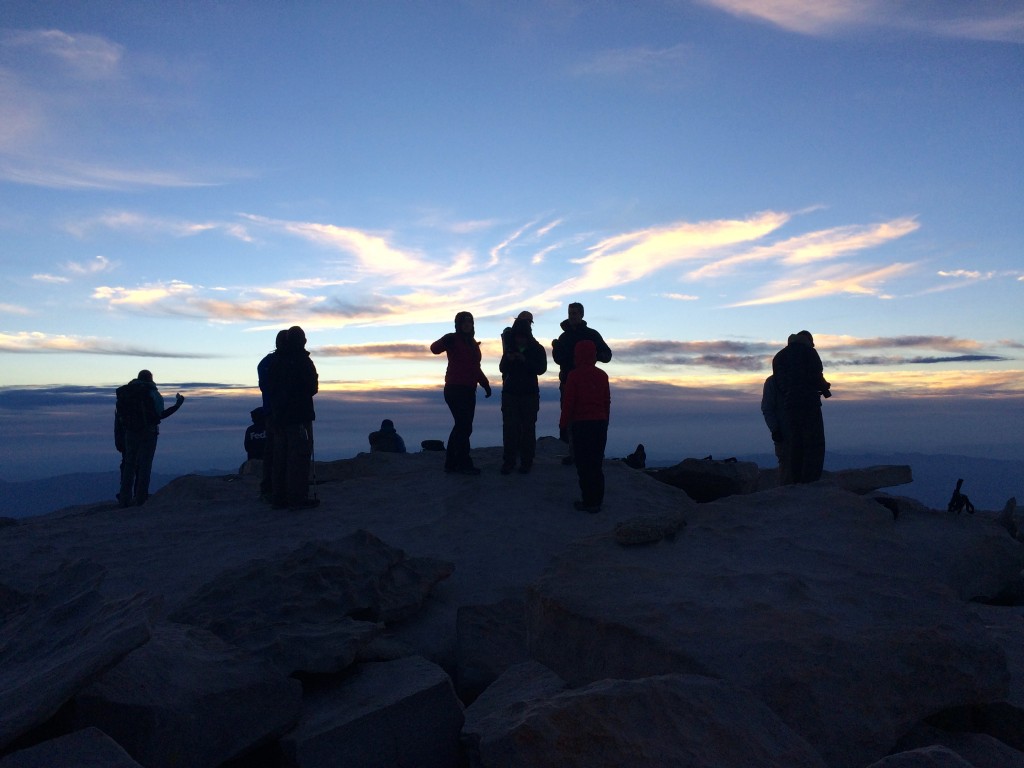 The all encompassing darkness of this final ascent gives you time to look inward.  In the tranquility of the pre-dawn hour, the face of Whitney shimmers with the headlamps of hikers moving as a pendulum, back and forth along the final switchbacks toward the summit.  Passing the stone hut (once again, thanks mules!), an ineluctable grin will spread across your face as you graze your fingers against the metal plaque.  Mission complete. 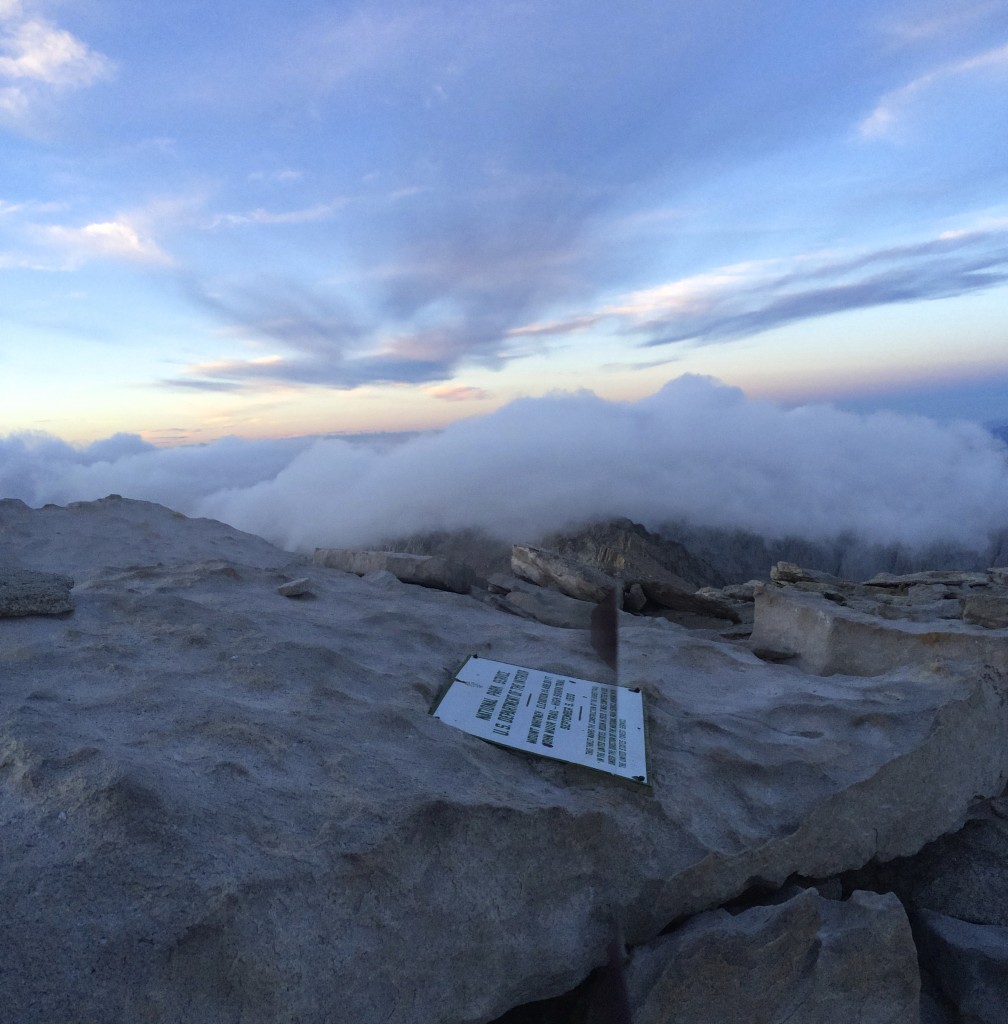 With the sun rising, the shroud of mystery and clouds recede, offering outstanding views in all directions; a most fitting end to a spectacular adventure. 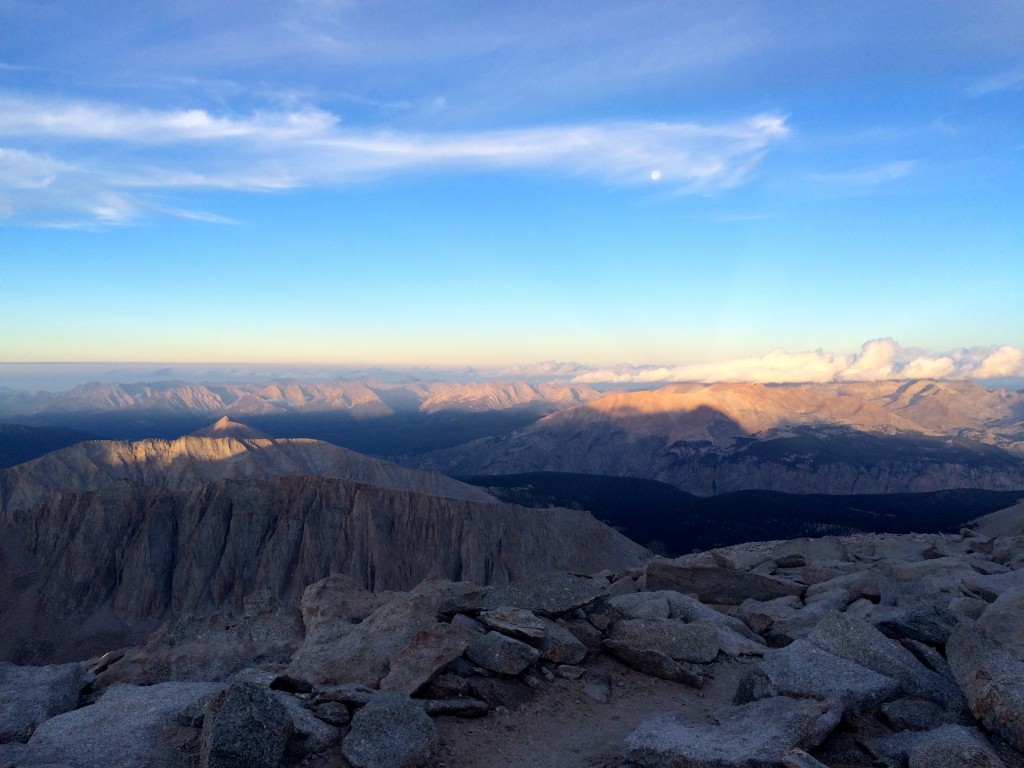 The view from the top of the lower 48!