When I began my gear research for the PCT, it only made sense to begin with taking inventory of what I already had in my possession. In 2013, I thru-hiked the Appalachian Trail, so I assumed I would be able to reuse several items.

It didn’t take long for me to realize how many things were not going to work for the PCT for reasons varying from the usual wear-and-tear to the potent stench of cat piss.

–Gear is always changing. Whether it’s lighter or more durable, the updates will never end in this lifetime.

–No amount of five-star reviews online can replace taking your gear out on a hike and actually testing it out.

–Do not leave your gear near your cat’s litter box.

All that being said, I thought it would be fun to compare my 2013 AT gear vs. 2018 PCT gear. It’s not only interesting to see how my pack contents have evolved, but also that while brand new gear looks glorious in carefully crafted photos in your living room, it really shines out on the trail. 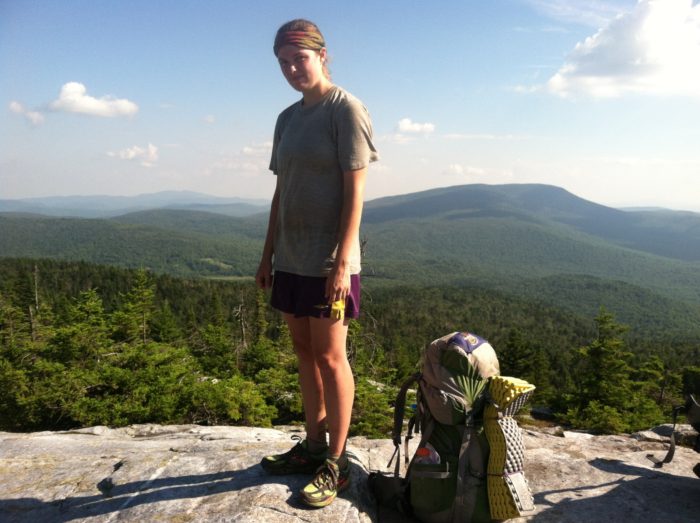 I was shocked when I was finally able to compare my base weights – almost seven pounds lighter! On an average day on the AT, I carried about 30 pounds on my back, so I really wanted to cut my base weight down for the PCT knowing that I may need to carry more water and food in certain sections.

The key to cutting my base weight lies in swapping out my big three.

–My Gossamer Gear pack weighs almost half as much as my Deuter pack. The Deuter was extremely comfortable, but I think my cat peeing on it was a sign to trash it.

–I’m making the switch from bag to quilt. What I hope I will love most about my Enlightened Equipment quilt is that I won’t wake up in a cold sweat every night feeling like I’m in a straitjacket. This was a constant issue for me, so quilt wins for now. 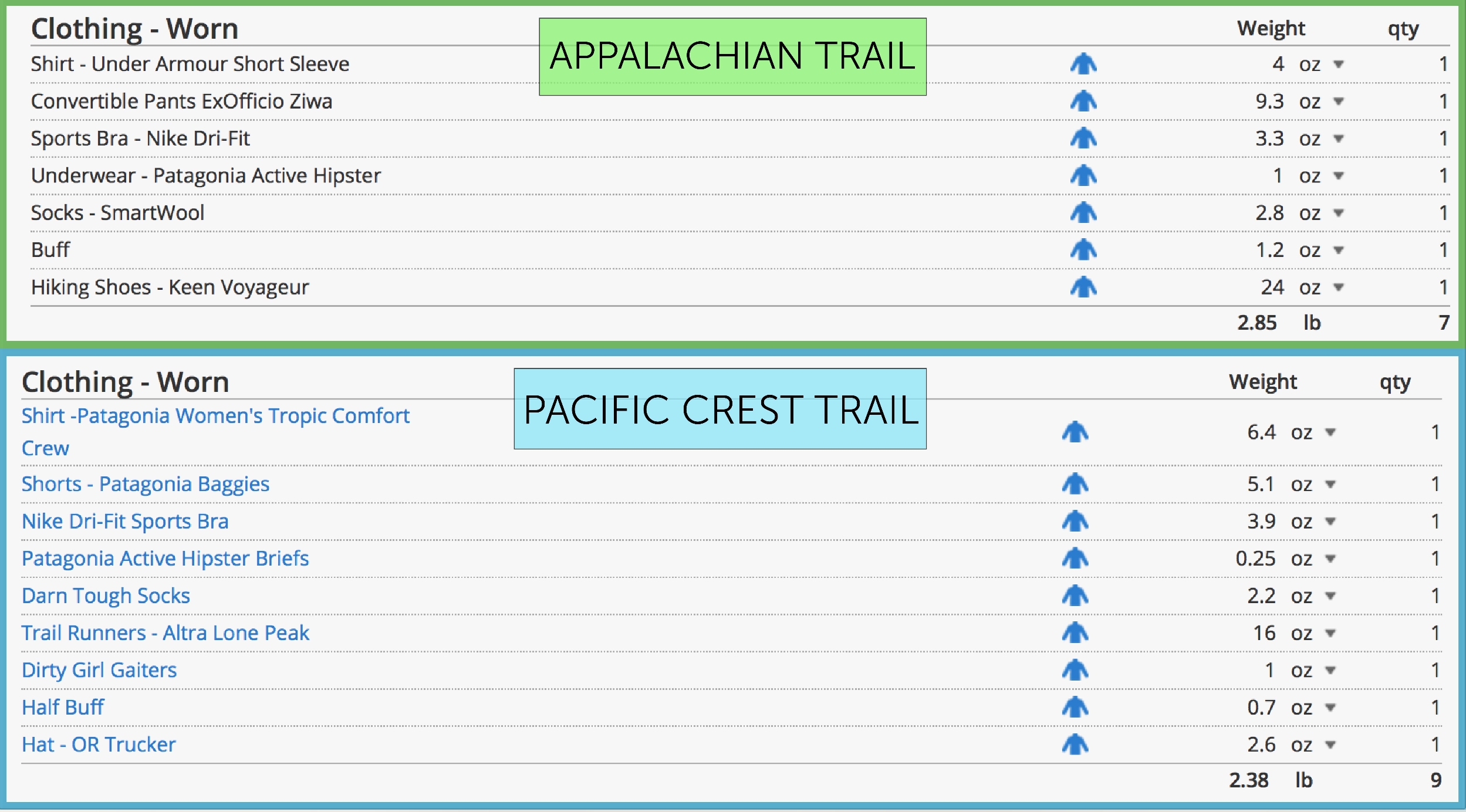 –The AT and PCT are two very different trails, so clothing is tough to compare. Two things I am definitely bringing again on the PCT are Patagonia Active Hipsters (wedgie-free for 2,000-plus miles!) and Darn Toughs.

–On the AT, I knew that convertible pants made the most sense but after hiking a few hundred miles, I couldn’t stand them. The fit was terrible for my body type and I really was not into the long cut of the shorts. I ended up ditching them in Pearisburg and switched to lightweight Adidas shorts and pants with zippers on the bottom. Heavier, but so worth it to be more comfortable.

–In less than 200 miles, my Keens gave me the worst pain in my feet and terrible blisters. Even after ditching them in Damascus, I paid for my choice in footwear for many miles after I made the switch to Oboz and then two pairs of Cascadias.

–I originally planned on going with Cascadias again for the PCT, but the newer models have been too narrow in the toe box for my foot. I bought and tested the Altra Lone Peaks on a few 15- to 20-mile hikes and have really liked them so far. We’ll see how they hold up for the long haul. 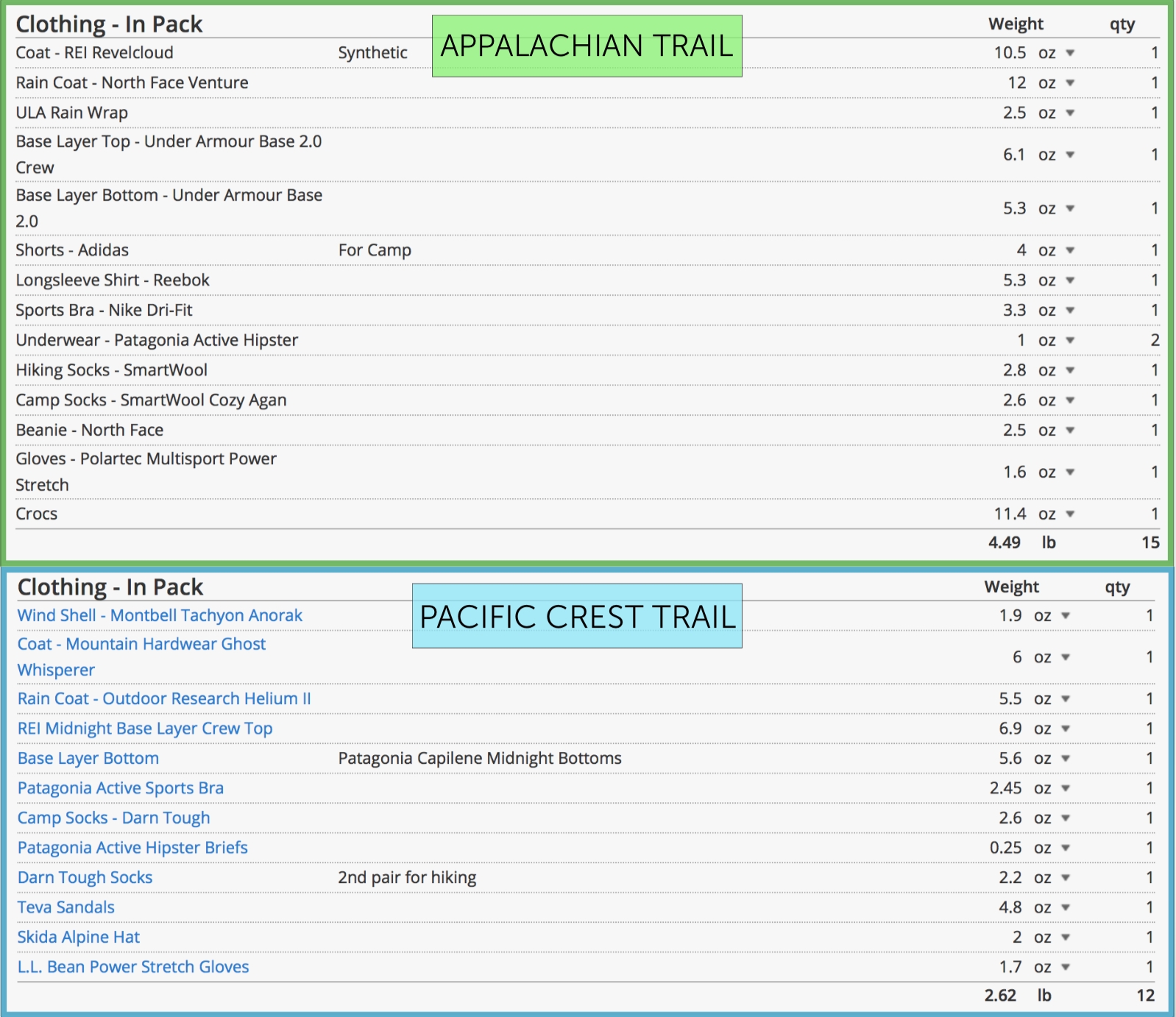 –I’m adding in a Montbell wind shell for the PCT. It weighs practically nothing and after testing it on the exposed peaks of Baxter State Park, I think it will be a solid addition.

–I thought I would love the rain wrap on the AT, but I stopped using it altogether early on. It became a great dry seat during breaks or at camp since we encountered a lot of rain that summer. I’ll be taking rain pants this time around.

–My fiancé, Miles, will be carrying our cookset again on the PCT, so that’s why it’s not listed here. We split the weight of shared gear items between the two of us. For the PCT, it’s only our tent, cookset, and fuel.

–Both of us are going to carry a Sawyer on the PCT to speed up water filtration. We only carried one on the AT. 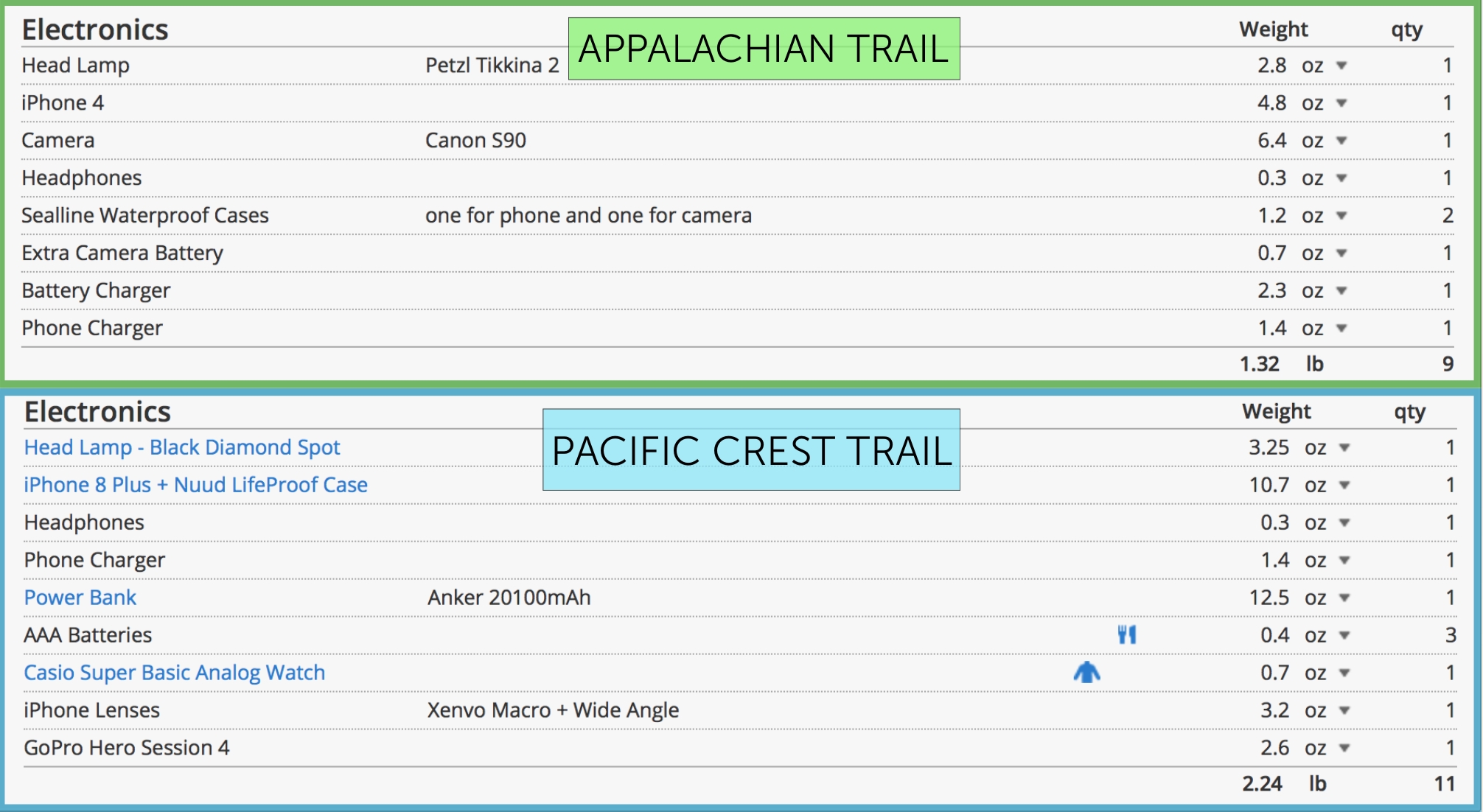 –My new Black Diamond Spot is heavier, but more versatile and powerful than the Tikkina 2 that I used on the AT.

–The Anker power bank adds on the most weight in this category, but it’s totally worth the extra ounces.

–I will not be carrying a separate camera as I did on the AT, hence my addition of the macro and wide angle lens attachments. 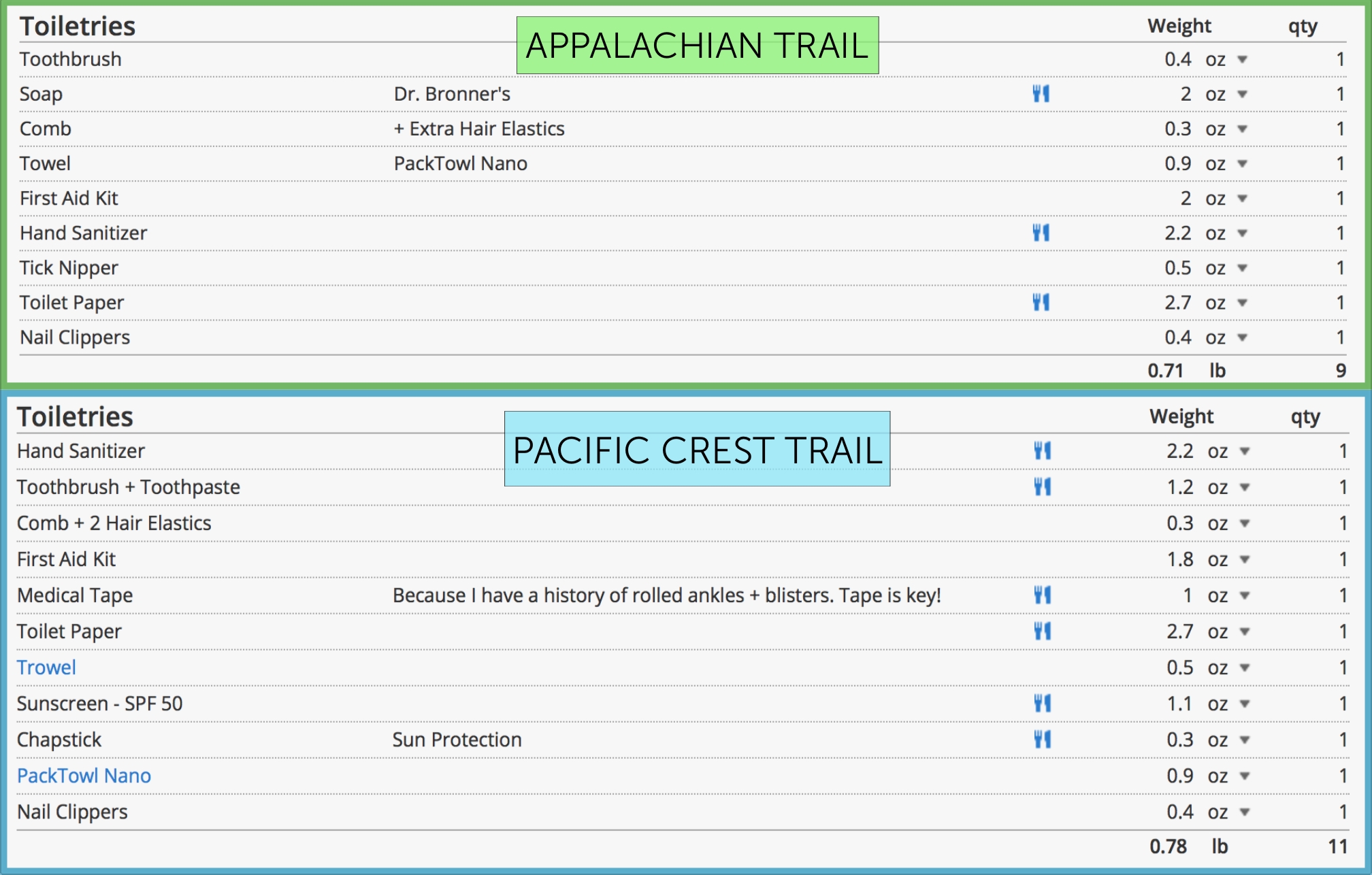 –We ended up ditching the Dr. Bronner’s early on the AT. We switched to toothpaste, realized there was always soap and shampoo available to wash up with in the hostels, and that water works just fine to get your dishes clean.

–A couple of extra things are on my list for the PCT – sunscreen and Chapstick. We aren’t in the green tunnel anymore. 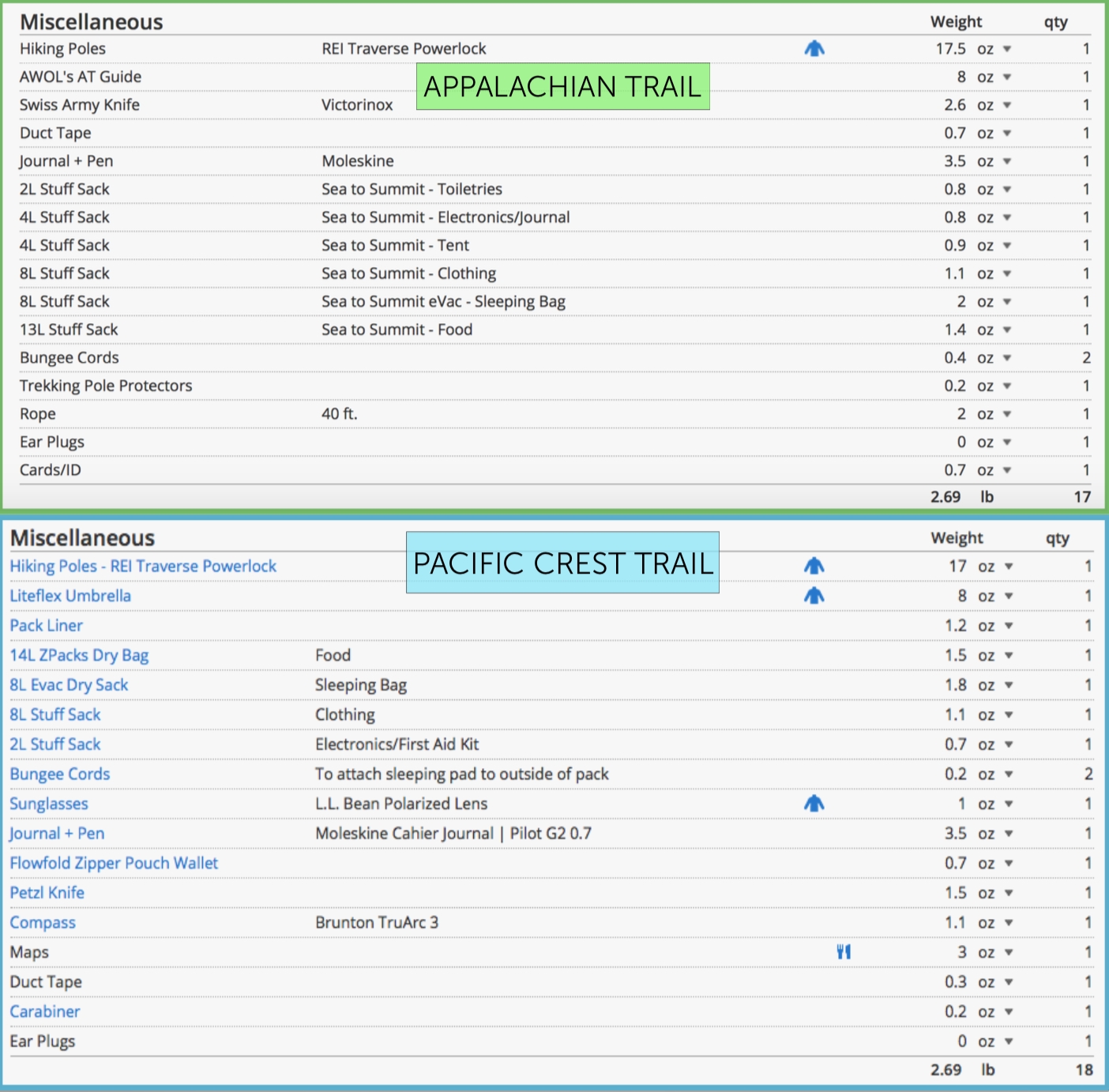 –This is just weird. The same exact weight down to the ounce from AT to PCT.

–I’ve switched out a few of my stuff sacks and traded in the AWOL guide for a hiking umbrella.

–I didn’t really need a Swiss Army Knife on the AT, so I went with a lighter knife this time and will add the small tweezers from my Swiss Army to my first aid kit.

AT gear on the PCT?

Honestly, I thought I would be reusing much more of my AT gear than this list of three small items:

So good that I bought it twice.

There are several items that I will be using again on the PCT, but for various reasons, bought them brand new rather than reuse from the AT. Some of these items are not on my original gear list, but I did end up using them later in our hike.

It’s way too easy to get sucked into the black hole of base weight analysis, but it is fun, right?

The key takeaway I learned from comparing my gear is that if you really want to cut your weight, start with the big items first.

Remember to take your own needs into consideration when compiling your gear. Think about why you want to ditch an item from your pack and the advantages and/or consequences of that decision. Ultimately, your gear is your choice.

The moments I’m way too deep in the world of base weight, I bring myself back to reality and remember that hikers have successfully thru-hiked with light and heavy packs.

There’s more to long-distance hiking than a quantifiable number of what’s on your back.