In a state known for mountains, the Maroon Bells-Snowmass Wilderness stands out among Colorado’s mountainous locales.  The stunning Elk Range towers with dramatic peaks. Located just outside of Aspen, Colorado’s fourth-largest wilderness stretches over 181,000 acres and provides numerous life-list backpacking opportunities on its 100 miles of trails.

Six summits rise over 14,000 feet, including the Maroon Bells, perhaps the most photographed peaks in Colorado. Nine alpine passes surpass 12,000 feet in elevation. Numerous alpine lakes lie within the wilderness. A-list wildlife including bear, deer, elk, moose, bighorn sheep, and mountain goats all reside in the region, among many other smaller animals.

The Maroon Bells-Snowmass Wilderness draws hikers from throughout the country. While the creative backpacker can come up with nearly endless backpacking routes within the wilderness, here are a few of the more popular and convenient loops that can be hiked within a few days to a week. Many of these routes share some of the same trails. Each route traverses several high passes, lakes, views of 14,000-foot peaks, and some of Colorado’s best scenery.

While opportunities exist to escape busier trails on some of these trips, expect to encounter other trail users. The vicinity of the Maroon Lake trailhead sees particularly heavy traffic, while outlying trails offer a little more seclusion. Most trailheads see a fair amount of peakbaggers seeking 14,000-foot summits in addition to backpackers. Due to the frequent climbing at high elevation over rough terrain, backpacking trips in the wilderness should be considered strenuous. 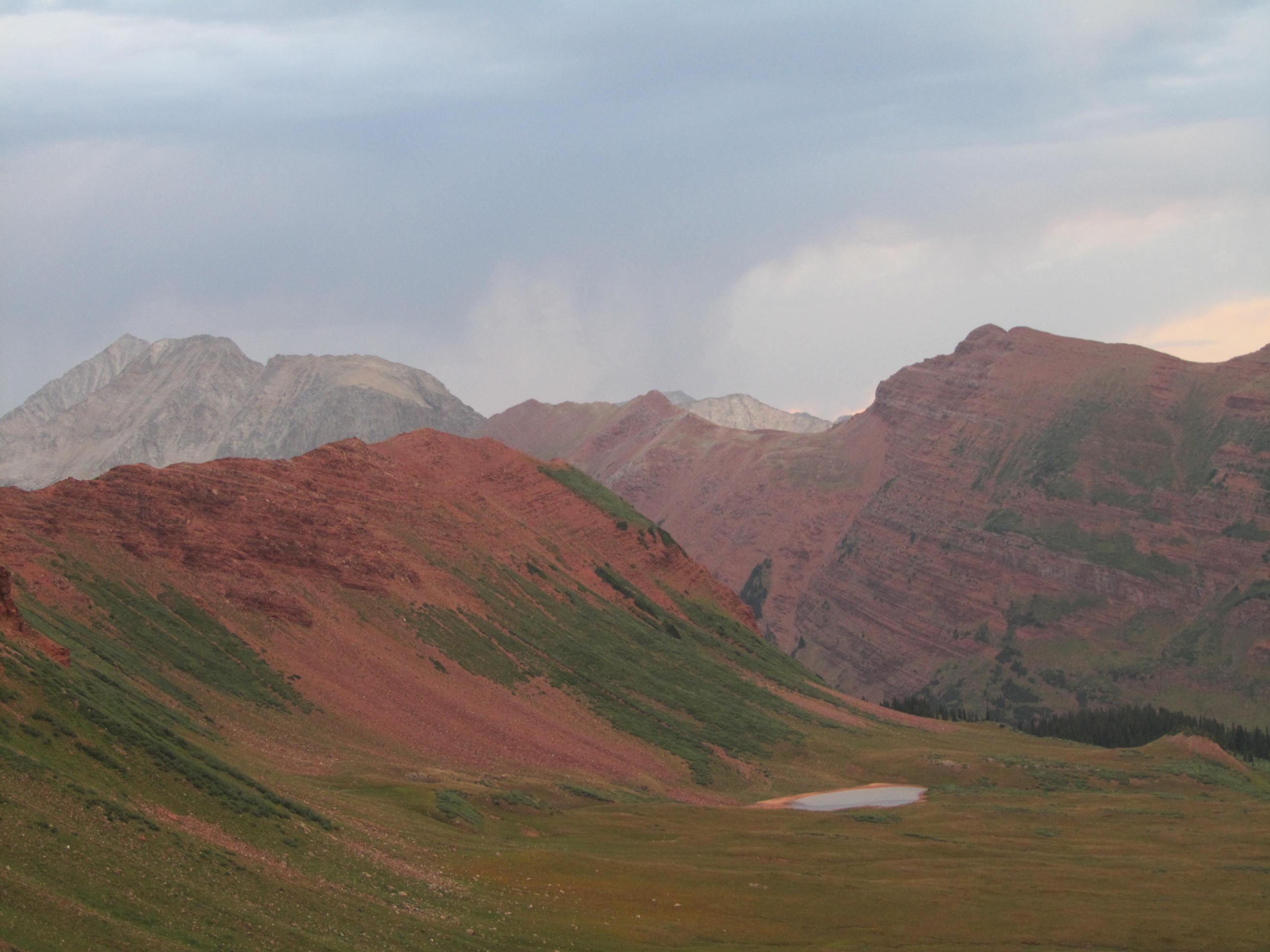 The Four Pass Loop is by far the best known and most traveled loop in the area, if not all of Colorado, drawing backpackers from throughout the country.  While trail runners knock the route off in a day, expect three to four days to complete the loop.  Hikers climb more than 7,400 vertical feet over the loop.

As its name implies, the route climbs four passes.  The loop starts at Maroon Lake and quickly passes the quintessential views of the iconic Maroon Bells from Crater Lake. The loop can be tackled in either direction. Traveling clockwise, the route knocks out West Maroon, Frigid Air, Trail Rider, and Buckskin Passes.  Each pass rises over 12,000 feet. Don’t expect too much time on the level.  The loop spends the majority of its time climbing or descending the passes.  The loop travels around the famed 14ers, the Maroon Bells, while passing just under 14ers Pyramid and Snowmass Peaks.

The Forest Service provides a route description here.  The Four Pass Loop Facebook page, found here, provides an excellent resource for current trail conditions and feedback from previous travelers of the loop as well as locals. 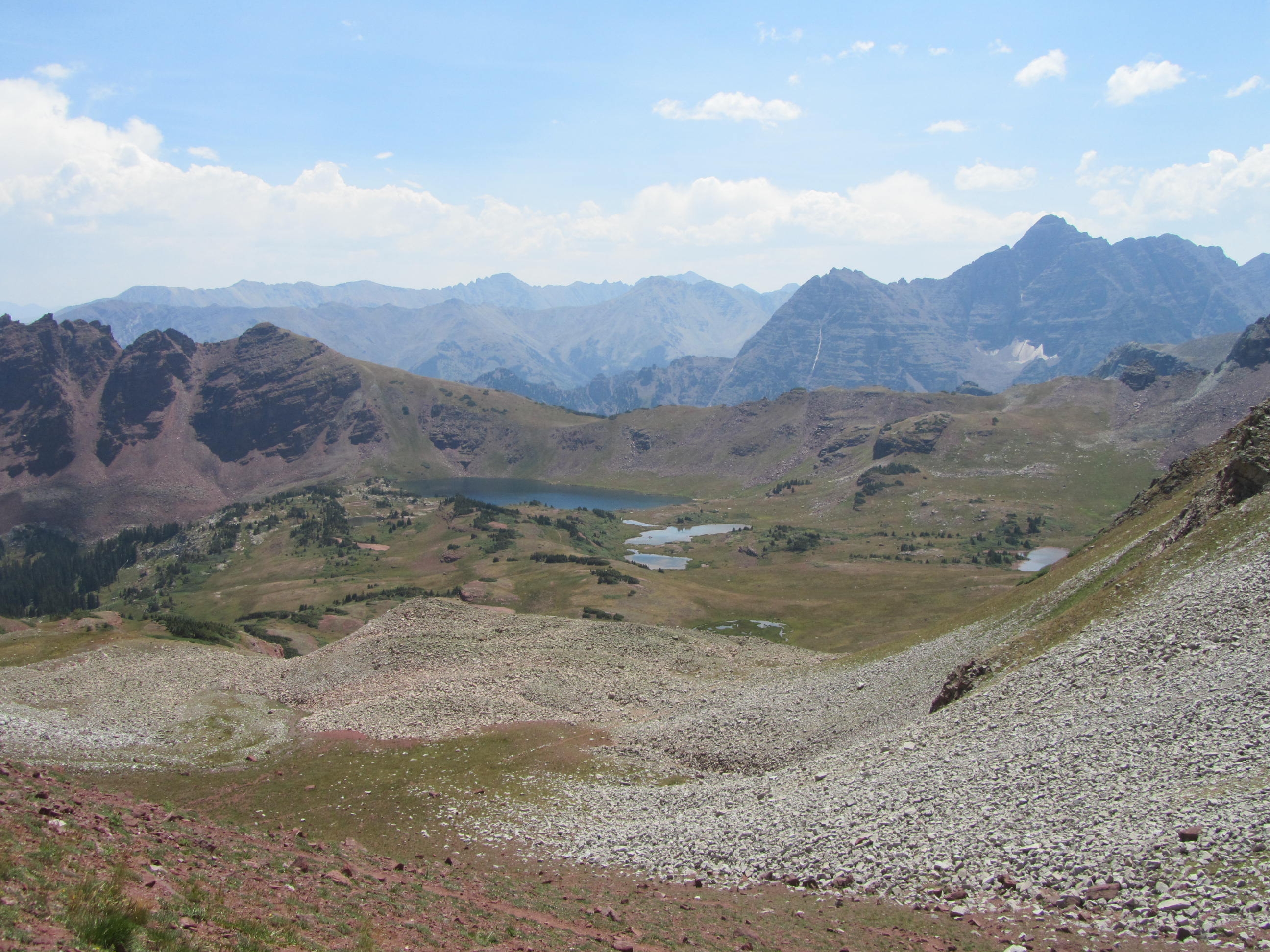 The Snowmass Lake-Willow Lake Loop provides a shorter loop option with fewer people than the Four Pass Loop.  Accessed from the Maroon Creek trailhead, the loop travels 22 miles following the Maroon Snowmass Trail en route to Snowmass Lake, which sits below its namesake 14er.  From Snowmass Lake the route briefly joins the Four Pass Loop, climbing 12,462-foot Buckskin Pass.  After dropping from Buckskin Pass, turn left onto the Willow Lake Trail, before reaching 12,600-foot Willow Pass.  The trail drops into a high alpine basin with elevations around 12,000 feet while passing Willow Lake.  From the basin, climb the high point of the loop at 12,680-foot East Snowmass Pass.  From the pass, the trail descends the East Snowmass Trail to the trailhead.  Hiking counterclockwise allows for a more gradual climb out of the gate.  While not quite as busy as the Four Pass Loop, this loop stills see a fair amount of people.  The route gains over 5,400 feet of elevation over its course. 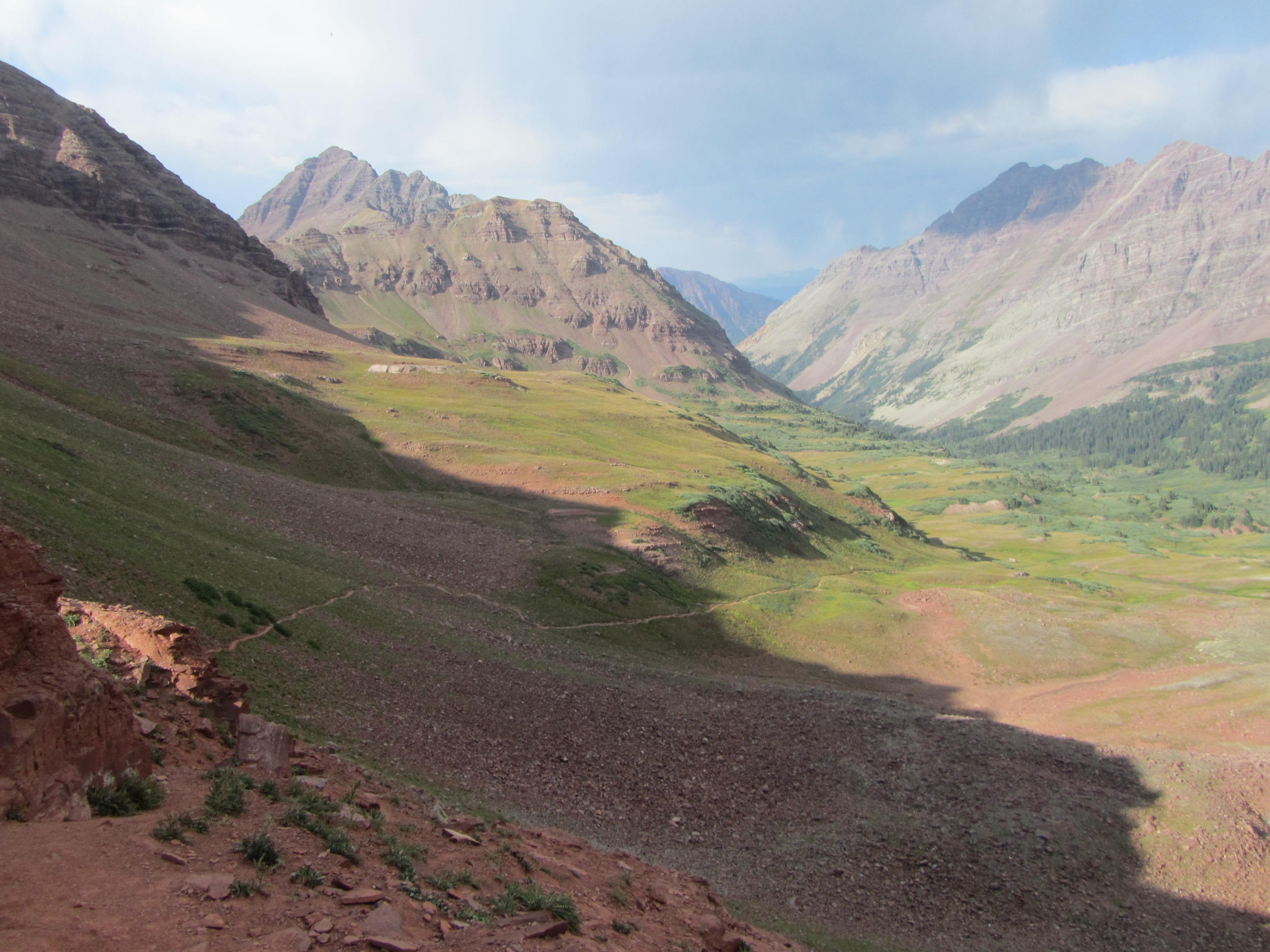 Accessed by the Maroon Lake shuttle at the East Maroon Portal, begin your route on the East Maroon Trail. Follow the route to 11,824-foot East Maroon Pass or continue on the Copper Pass Spur to reach the loftier 12,623-foot Copper Pass. For an even higher pass, continue .6 miles beyond Copper Pass to 12,881-foot Triangle Pass.  From the passes descend toward Copper Lake.  The Copper Creek Trail descends from the lake before exiting the wilderness on the Trail Rider’s Trail. Follow the Trail Rider’s Trail, known locally as the 401 Trail, to the Schofield Trail. The Schofield Trail rejoins the Four Pass Loop on the West Maroon Trail, west of its namesake pass. Descend West Maroon Pass back toward Maroon Lake.

While the West Maroon Pass section of this loop sees a steady flow of people, the East Maroon and Copper Lake sections offer a little more solitude.  The route travels 32 miles, but expect to add about another mile to reach Copper Pass and just over a mile round trip to reach Triangle Pass.  This route can also be accessed from the Crested Butte side of the Wilderness near Schofield Pass. Be aware of mountain bike traffic outside of the wilderness limits on the Trail Rider’s Trail. 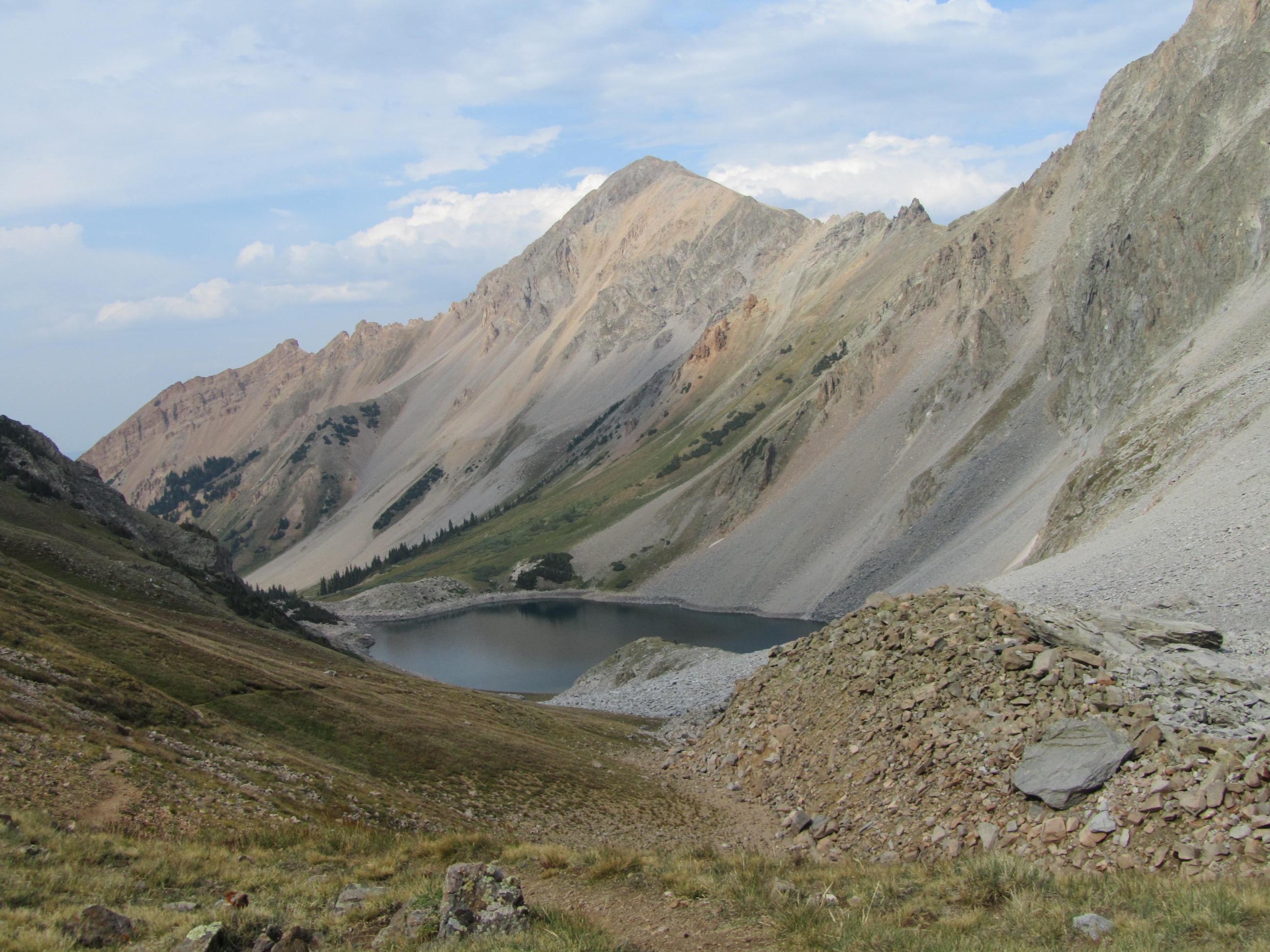 For those looking for more of a challenge and a little more solitude, be sure to tackle the Capitol Creek Circuit.  This ambitious loop begins at the Capitol Creek trailhead.  Over its course the route circles 14ers Capitol Peak and Snowmass Peak while traversing four high passes and passing by four nice size lakes.  The route finding tends to be a little trickier as well with less defined trails on the Avalalanche-Silver Creek Trail.

From the trailhead, follow the Capitol Creek Trail past Capitol Lake and over 12,000-foot Capitol Pass.  Descend by Avalanche Lake before a long alpine traverse eventually leads to 12,000-foot Silver Creek Pass.  Cairns along this stretch are infrequent and the tread faint, so take care following the occasionally vanishing trail.  From Silver Creek Pass the trail drops to a short walk on a dirt road to the Lead King Basin. The route climbs to scenic Geneva Lake, passing numerous waterfalls along the way. The route continues over Trail Rider Pass before visiting Snowmass Lake. Descending from Snowmass Lake on the Maroon Snowmass Trail, look for the West Snowmass Trail.  The West Snowmass will lead you over Haystack Pass at just under 12,000 feet before rejoining the Capitol Creek Trail near the end of the loop. 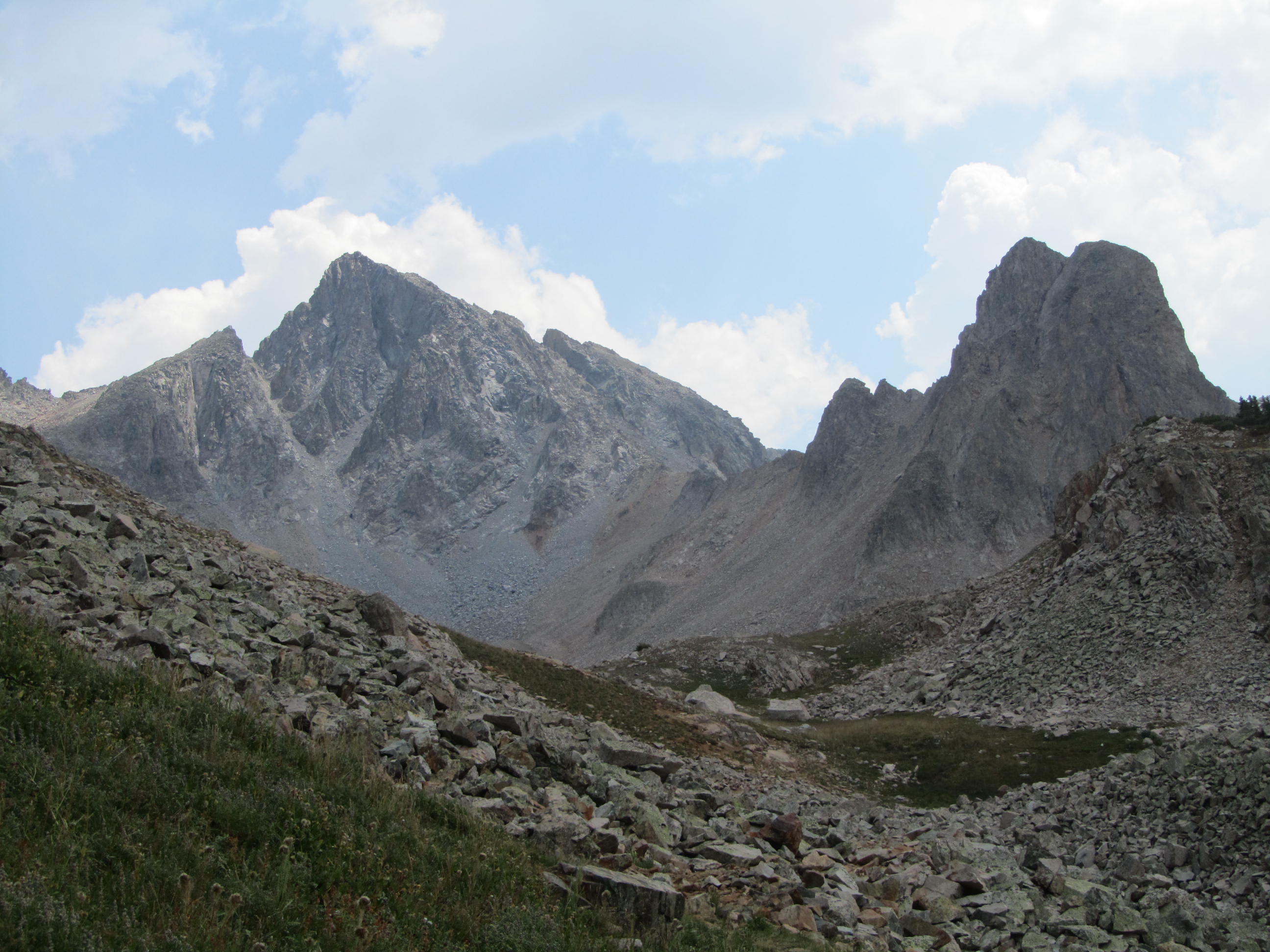 While not officially named, the Eight Pass Loop ties together most of the above routes for one long loop through much of the Maroon Bells-Snowmass Wilderness. While there are numerous trailheads to access, I chose the Maroon Creek trailhead in the northern end of the wilderness. I began on the East Snowmass Trail, reaching two 12,600-foot passes that bookend the 12,000-foot Willow Lake Basin. From the second pass, Willow Pass, the route drops just below Buckskin Pass and joins the Four Pass Loop. The trail continues to its third pass of the trip, West Maroon Pass. Rather than continuing directly to Frigid Air Pass, hike beyond the turnoff for Frigid Air toward Hasley Basin to reach 12,000-foot Hasley Pass, pass number four.

An old, unmaintained trail traverses across open tundra before rejoining the Four Pass Loop just below the fifth pass of the trip, Frigid Air Pass. Keep an eye out for domestic sheep and their dogs on this stretch. Divert from the Four Pass Loop below Trail Rider Pass, heading toward Geneva Lake to enjoy its scenery. At this point, continue on the Capitol Creek Circuit. Pass Geneva Lake and drop into the Lead King Basin. A short road walk connects to more alpine terrain before reaching 12,000 feet at Silver Creek Pass, pass number six.  Make your way over a faint alpine trail and drop to Avalanche Lake. Leaving Avalanche Lake, climb steeply over Capitol Pass on the shoulder of Capitol Peak, pass number seven. After dropping from Capitol Lake, climb to join the West Snowmass Trail and climb over Haystack Pass for the eighth and final pass before wrapping up the loop 51 miles later back at the Maroon Creek trailhead.

If you have the time,  this route offers the most of the Maroon Bells-Snowmass Wilderness in one outing. In addition to eight passes, the route travels by five lakes. This loop also circles 14ers Capitol Peak, Snowmass Peak, and the Maroon Bells, while it passes just below Pyramid Peak.  Countless other higher mountains fill in the scenery.  Expect more than 17,000 vertical feet of climbing on the route as described.

Know Before You Go 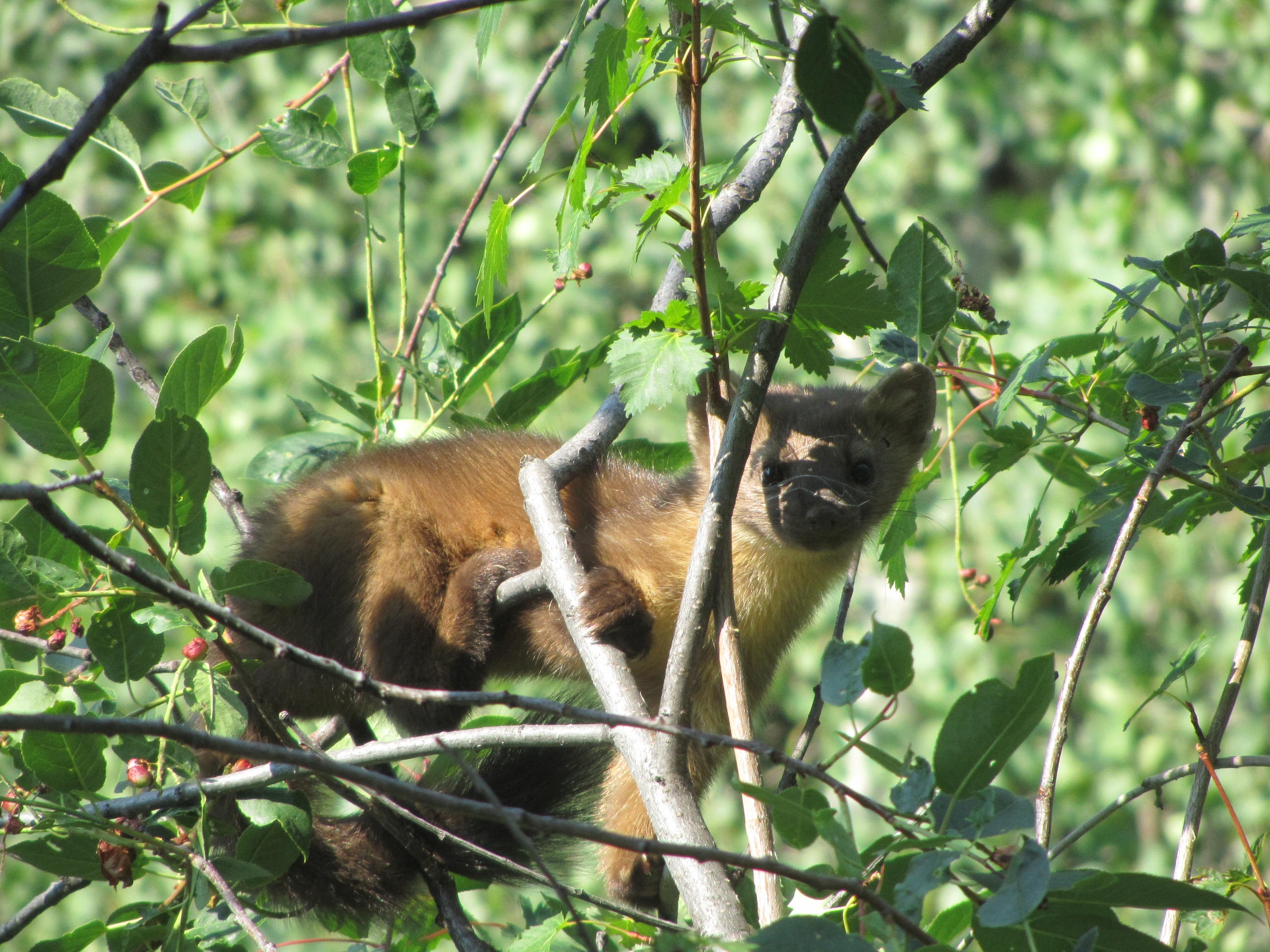 Special rules apply within the Maroon Bells-Snowmass Wilderness. A few notes are worth mentioning. 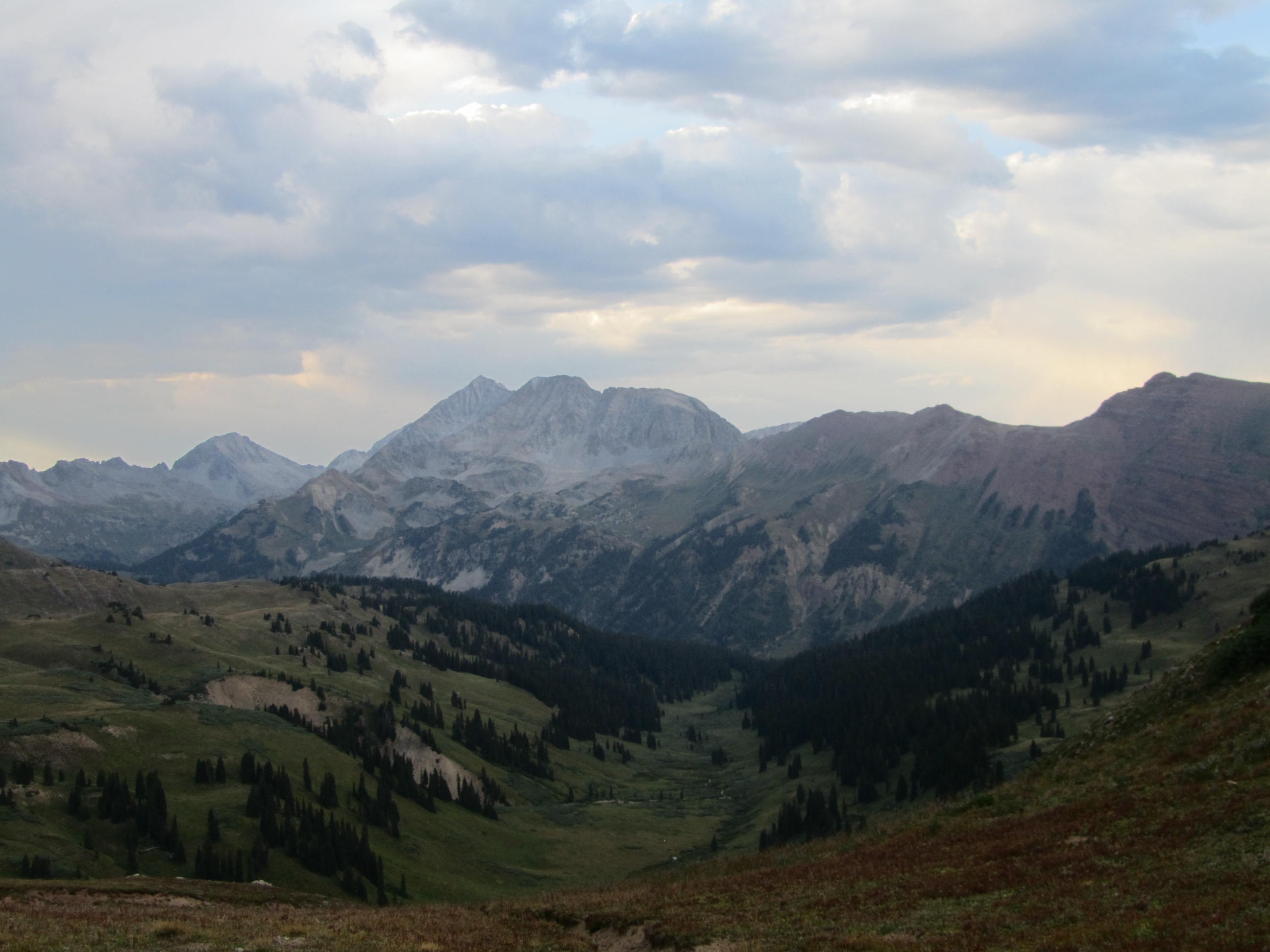 The Best Backpacks for Thru-Hiking of 2022

The Best Thru-Hiking Tents of 2022