Celebrating Katahdin: 13 Ways to Live it up on the Last Peak

Editor’s note: This post was written prior to the BSPA’s letter to the ATC, when Baxter State Park became explicit about the park’s rules and how thru-hikers have been routinely breaking them, namely the consumption of alcohol at the summit of Katahdin.  In light of this, Appalachian Trials urges thru-hikers to strictly adhere to all of BSPA’s rules, which can be found here.  Thru-hikers should still celebrate their accomplishment, but to save the champagne and crowds (13 or more) for outside of the park’s boundaries.

For northbound thru hikers, the pull of Katahdin is becoming a reality as the summer wears on. As you cross into Connecticut and Massachusetts, New England is a welcome sight. Reaching Vermont leaves you with only three states left. The Whites fade into Maine and victory seems inevitable. You dream of it. You pray for it. You curse it. You pine for it. And finally, one day, the dramatic silhouette of The Greatest Mountain, as the Penobscot Indians called it, stands before you in the distance. You have arrived.

The days after your first glimpse of Katahdin slide by effortlessly against the trials you have seen to reach this point. Between fretful realizations of your waning time on the trail, you try to imagine what it is like to stand in front of that weather worn, wooden sign. These thoughts have been with you for a long time but the reality of them now looms above you and grows as you near the end.

Katahdin. What will you do when you reach that last peak? How will you celebrate?

13 Ways to Live It Up on Katahdin

Sign poses, such as the wonderful plank below, open up a whole new realm of conversation and thinking material for the approaching thru hiker. One can simply hop on the sign and snap a photo. Or one could commemorate a strange action like willingly walking 2,000+ miles through all sorts of hell with an appropriately strange photograph, as Clever Girl did in 2013. 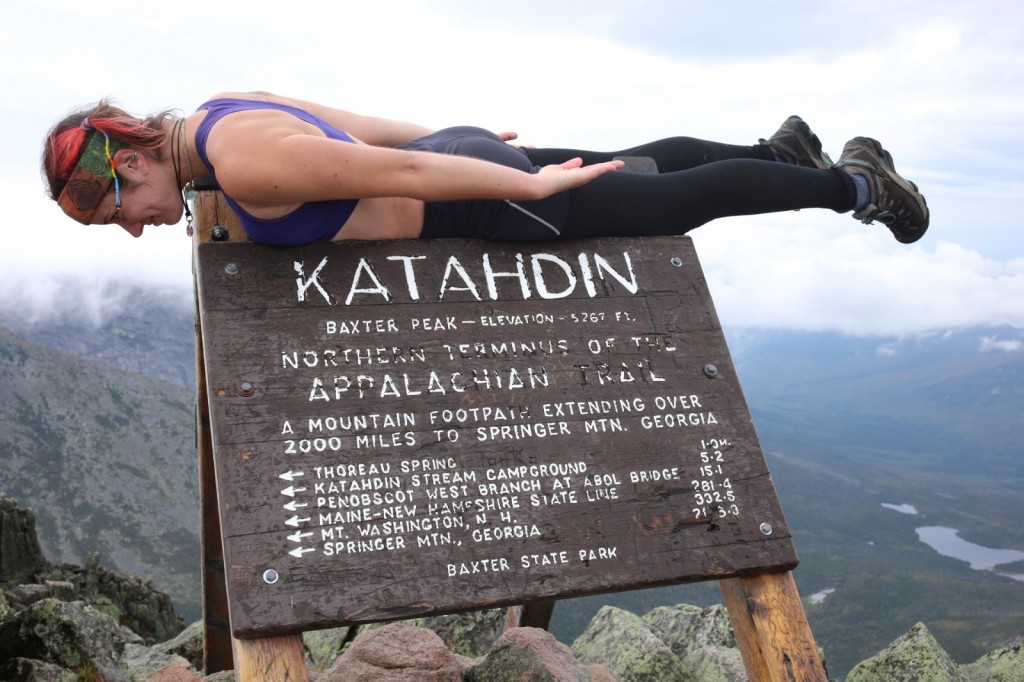 Clever Girl’s blog continues to be full of awesome things like this photo. Check it out. Photo Cred: https://tinyurl.com/q2ey6yx

Thru hikers may be called hiker trash, but they know when to get gussied up for special occasion. For those who are going for the classy approach, securing a suit (or dress for the ladies) is the tough part. Having one sent to Monson that was bought priviously or sent from home is the best option. Also, in typical hiker trash fashion, the more gaudy the better! 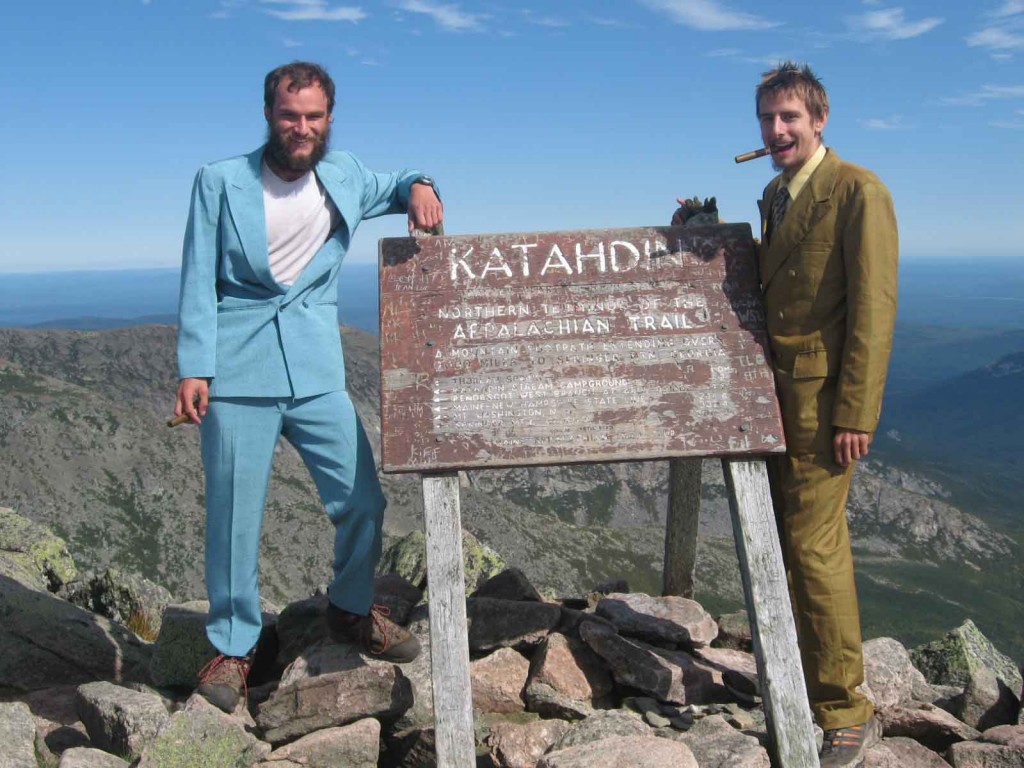 Hikers in general don’t tend to be the type to take themselves too seriously. You’ve got to know how to laugh when your life calls for dodging lightening, having insects feed on your blood and your shoes are more often wet than dry. It’s only natural that this to show itself at the great finale. 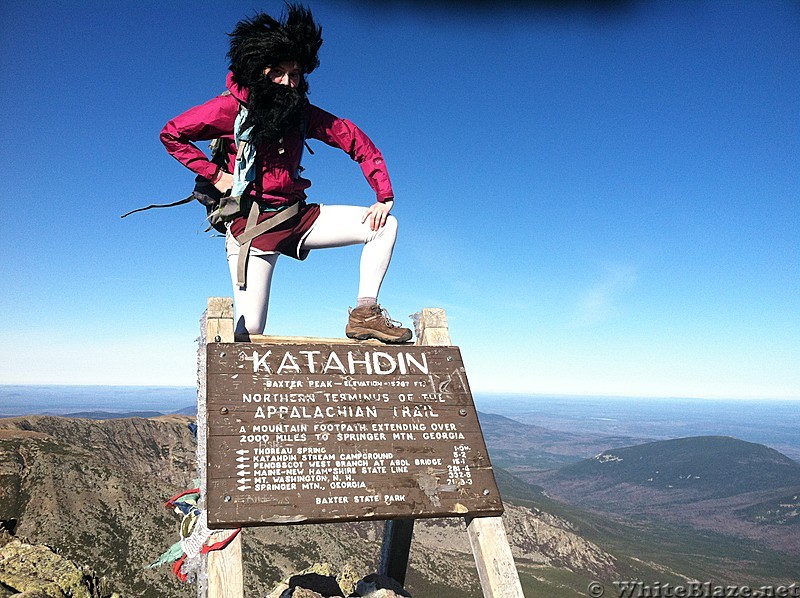 M’ssippi, a 2012 NoBo finally grows her own thru hike beard! Photo Cred: https://tinyurl.com/q4rk76o

Maybe its walking in the wake of the farts released by your hiking partners. Maybe its stumbling upon another hiker mid-poop. Maybe its consistently going nearly a week or more with out showering. But there is something about thru hiking that makes you just a little less shameless in life, and for the better! Dump Truck agrees that Katahdin is a perfect place to let it all hang out! 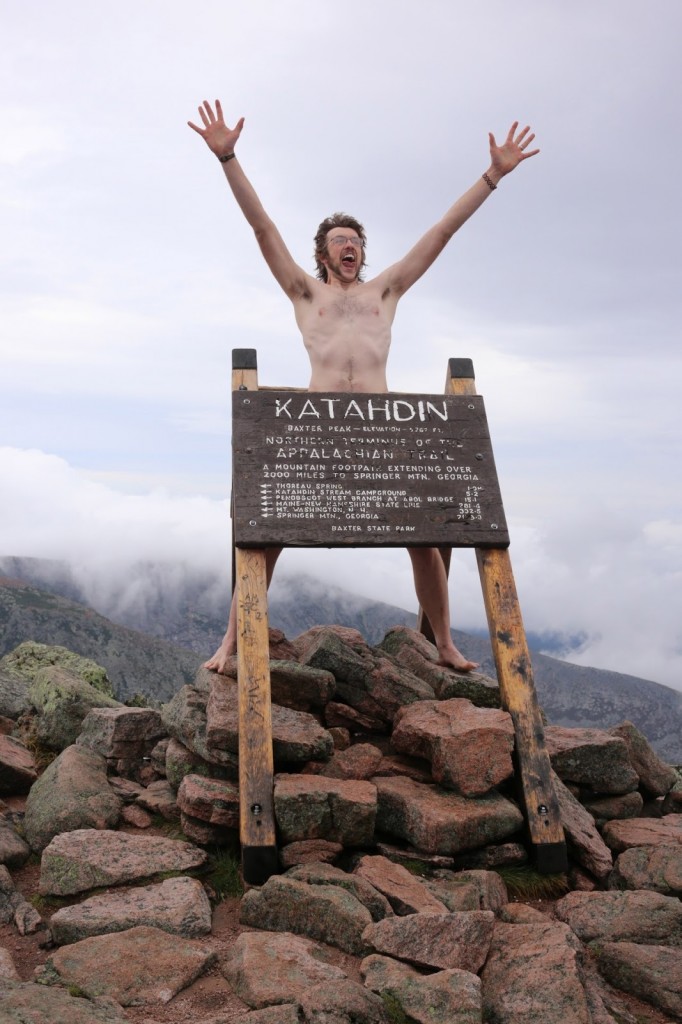 Alright, so obviously all these stones weren’t lugged from Springer, but it is a popular tradition to snag a stone in the south and walk it all the way to the northern terminus. Anyone who can hold on to and keep track of a small stone over than many miles is my hero. 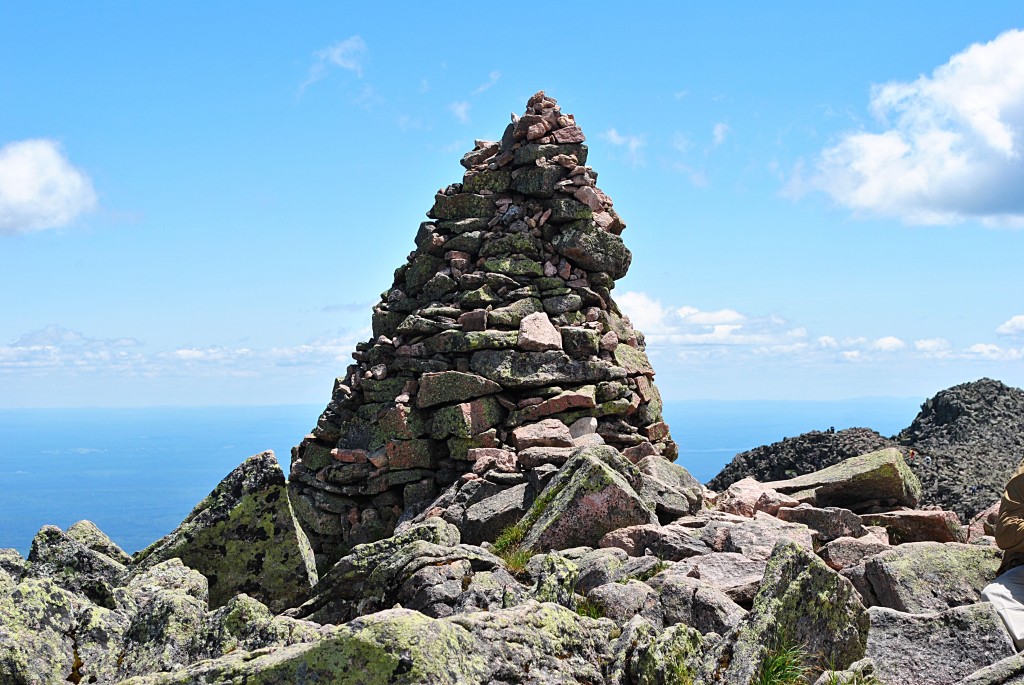 This photo by Meg Wilson just about says everything there is to say about that feeling of being on Katahdin. I mean, c’mon. Just look at this. I’m having a good time already! This is Katahdin done right 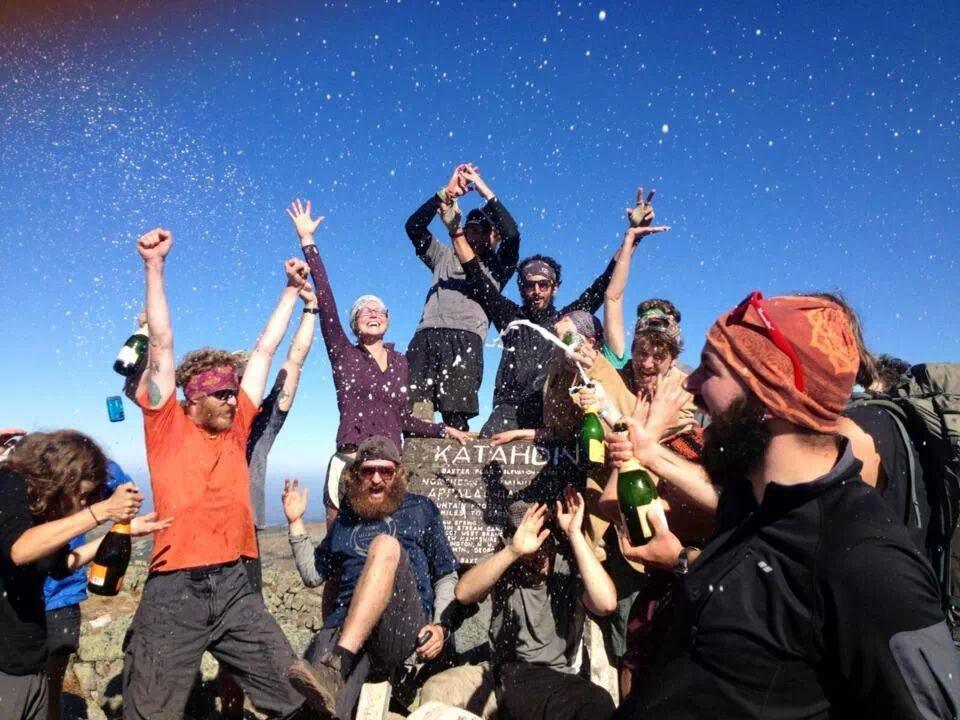 If you follow this link there is an awesome post on Meg’s blog about the scene depicted. Photo Cred: https://tinyurl.com/m54gzc5

They say that all who wander are not lost but I think that all who make it to Katahdin are a little bit insane. At very least, by the time you are standing on that last peak you are anything but normal. Spider Mac appropriately displays that in his 2013 summit photo. 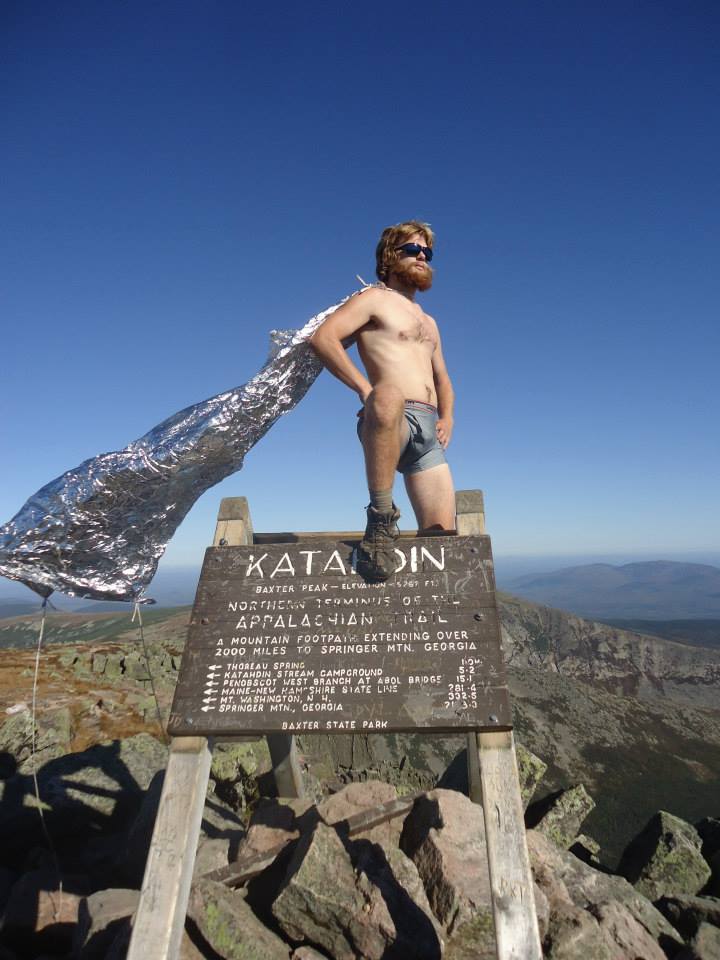 Obviously it is only natural for a hiker to sneak a few brews or a couple bottles of champagne into a strictly no alcohol area when they have spent approximately six months working to get there. As long as you practice Leave No Trace, why not?! 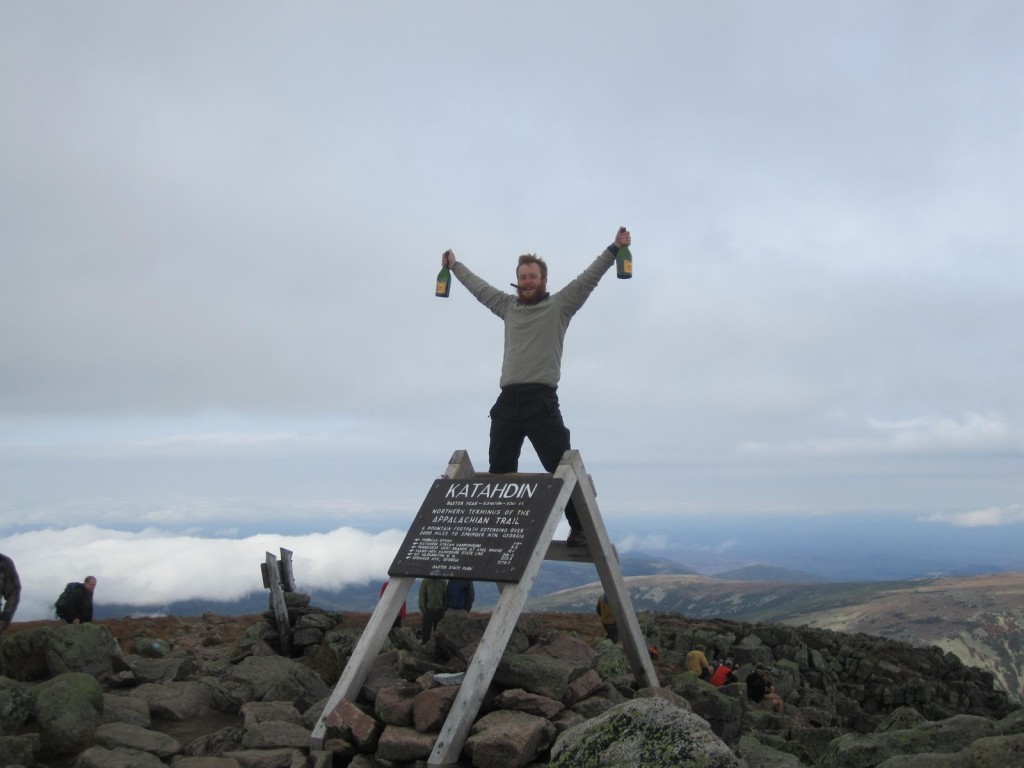 When you spend as much time and effort to get to one place, you don’t want to leave! The problem is that Katahdin can be a bit chilly. Bringing a sleeping bag means you can hang out half the day if you want and relish the views (if there are any that day.) 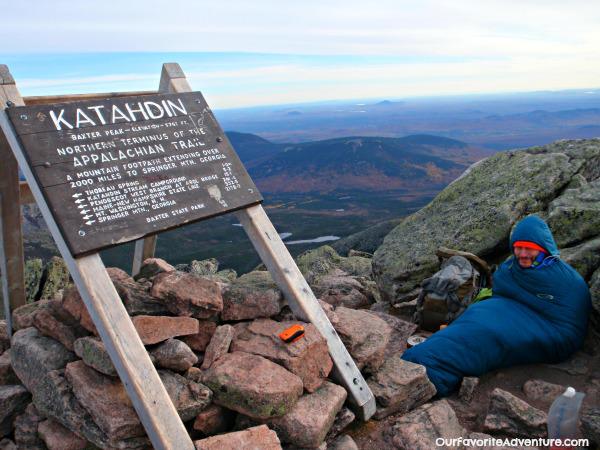 Again, why not? Hikers are crazy and you already made it to the top of Katahdin, so if you break a leg now its totally fine. 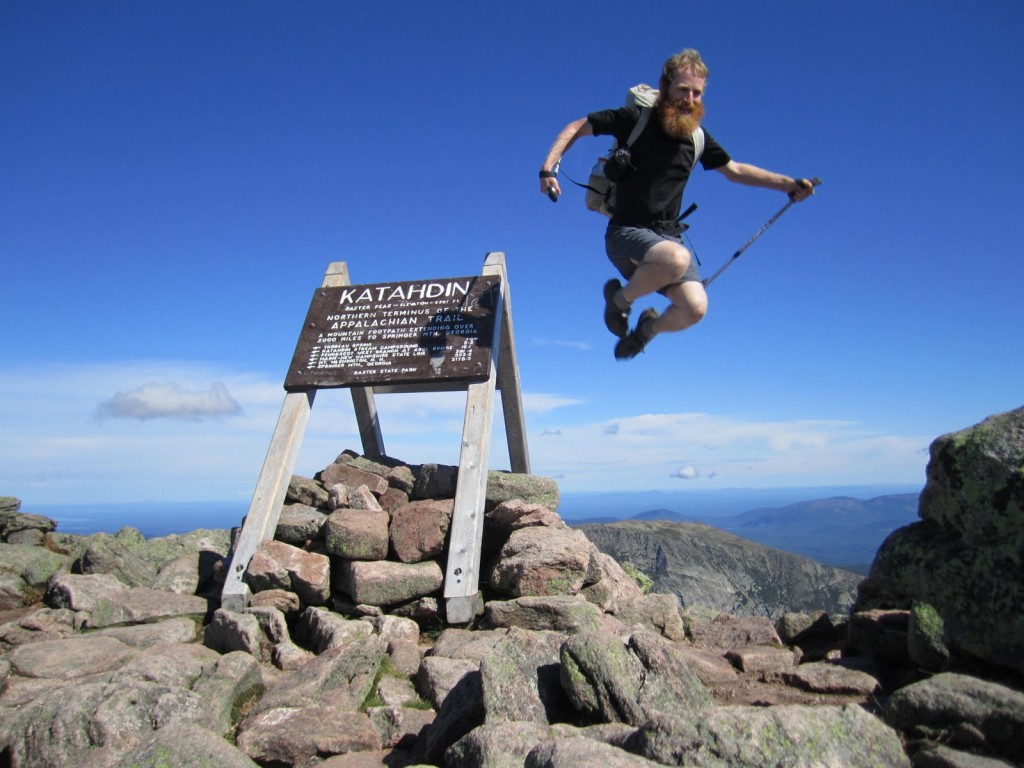 Remember Garry who runs the Blueberry Patch in Georgia? Well besides being an incredibly sweet and caring human being he is also crazy! He and his son thru hiked in 1991 and Gary climbed into his son’s pack on Katahdin, because, you know, its Katahdin! 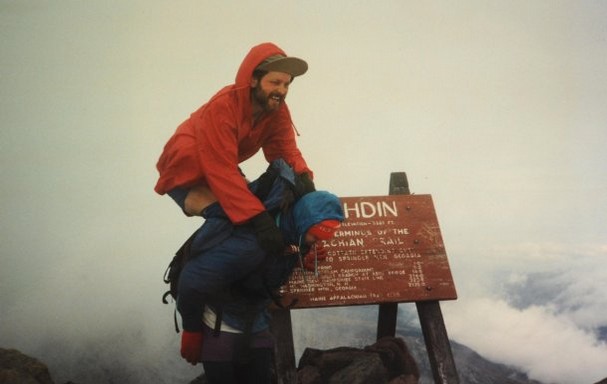 After thru hiking the AT, you’ve slogged through just about as much bad weather as one can imagine. Some years are better or worse than others but every year the AT runs along the mountains on the east coast so it’s stupid rainy, hot and humid. If Katahdin doesn’t cooperate with you, show it just how little you care about bad weather at this point in your life. As seen above, there is still reason to celebrate! 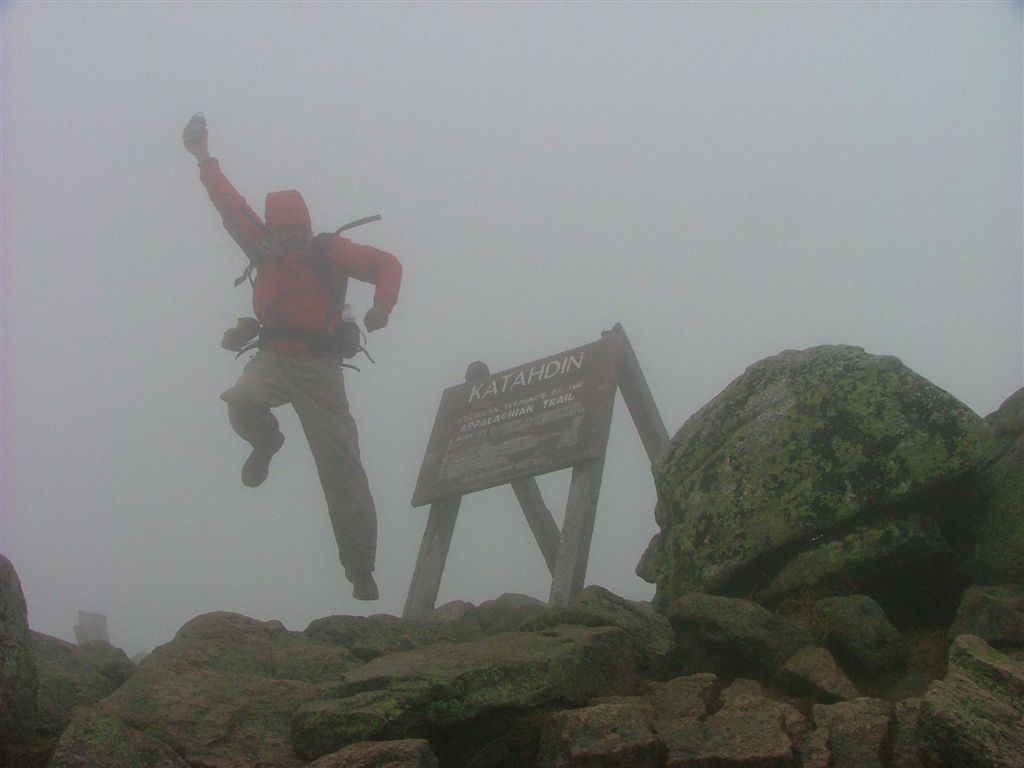 It’s okay. You just suffered beyond what most humans would willingly suffer through to get here. You sacrificed a lot and had to show extreme determination to complete such a feat. A little bit of emotion is bound to happen, if not a lot of it! 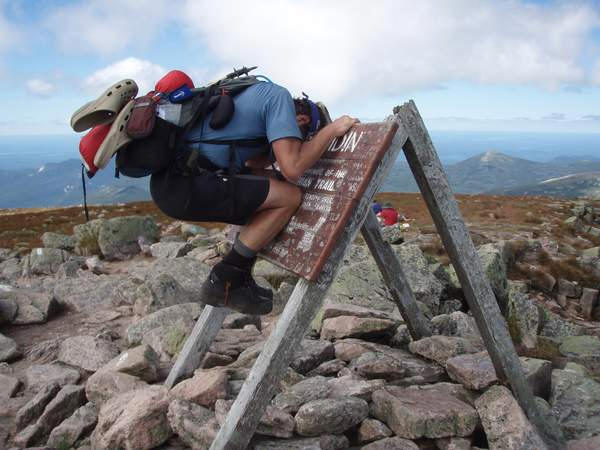