In the summer of 2020, when the world was still at a stand-still in the early months of the pandemic, I walked from Denver to Durango along the 485 mile Colorado Trail. “Walked from Denver to Durango” is just five words and there’s no accounting for the people, the places, and the pure magic that is contained within that single sentence. What I found in Colorado unraveled and complicated carefully laid plans I had made for myself. In place of those plans, the trail imparted to me something irrevocable and mysterious that I am still trying to interpret.

The Colorado trail wasn’t my first thru-hike and it wasn’t my last. A triple-crown hiker who picked me up while hitchhiking outside of Bishop, California, informed me, “There’s nothing quite like the enchantment of your first thru.” I disagree. My first thru-hike, Southbound on the PCT in 2019, was certainly unlike anything I had ever previously experienced or imagined. It was absolutely transformative. However, transformation is a continual process–a constant “becoming” that is only “achieved” in the unfinished business of searching and seeking. My subsequent thru-hikes were not an attempt to recreate or return to that original trek along the PCT. That time, those places, and the people I connected with along the way are beyond reach, hidden away in some still-living yet irretrievable past. Rather, each thru must be experienced on its own terms. And the trail doesn’t give a damn if you’re a seasoned hiker or a complete stranger to wilderness–she’ll kick your ass, spit in your eye, and bless you regardless.

I struggled with how to communicate what exactly unfolded in the span of a few weeks of thru-hiking in 2020. I worried that what I might share would be hurtful to some or distasteful to others. The older I get, the more difficult it is to be vulnerable. To be really, courageously honest with myself and others. Higher stakes. Bigger consequences. The risk of relational fallout with family and friends. People seem inclined to be forgiving of those who are still young and in the process of defining themselves. I like to think I still belong within that category. I hope, perhaps naively, that I always will.

Heading to the Colorado Trail

Scattered light, cast from the burning heap of wood and stone, dripped down enormous oak trees like melted butter. Soft, translucent, and as elusive as its shadowy counterpart. Disparate lawn chairs and their occupants sat at a distance in a loosely linked circle around the bonfire burning like a lone light in the forest. The forest whose trails I could navigate exclusively from memory; whose every inch I had set out to explore in my childhood.

My own chair was balanced precariously over the mossy earth, teetering between family members and friends who had gathered in the balmy summer air to celebrate the 4th of July during the pandemic. At a time when gatherings and celebrations were far and few between, it felt odd to be in the presence of so many other people. It felt odd to be celebrating our nation’s independence in the midst of national lockdowns, an unprecedented public health crisis, and widespread unrest caused by police violence and systemic racism. Secretly, I pretended everyone had assembled to see me off on my last night in town.

I rolled my head back to take in the open sky, watched as a satellite or a plane drifted slowly across the blackness, a blue orb lighting her own path. I brought my glass to my lips, tasting water and imagining wine. Tonight, for the first night in a string of days that had been nearly indistinguishable from one another, I was completely sober. I had excused and absolved myself from the mandatory shots of icy tequila under the auspices of a solid night of rest before beginning my thru-hike on the Colorado Trail. The arms of my chair cradled me as I relaxed into its flimsy plastic grip, feeling quietly grateful and almost perfectly at ease. Almost.

I awoke at 4:30am in a rigid posture, feeling as though I had hardly slept. My hair was still wet and tucked into an impossibly tight bun at the crown of my head. I shook off the remnants of a dream I’d already forgotten even though its intensity left a lingering ache in my gut. My glowing phone screen displayed a fragment of a text from an unknown number. When the waking world came into focus and I opened the message, I realized it had come from Luke’s satellite phone. A flurry of tangled emotions passed through me as I read the well wishes he’d sent to me across the thousands of miles of land and sea that separated us.

I viscerally recalled the last time I had seen him. It was at the airport, exactly one month earlier, and we had rushed through our goodbyes as Luke boarded a plane to Anchorage, Alaska. He seemed unfazed by our parting, confident that we would see each other again, despite the decidedly different directions in which our lives appeared to be moving. Luke was unflappable by nature and he had a talent for making peace with whatever hand the universe dealt to him– which is to say, he was unconcerned. After he disappeared from view, I found an alcove within a staircase where I could sit and cry within the limited privacy that the airport could afford. My blue paper mask concealed my sadness from passersby as I allowed the anguish of separation to set in. By the time I had caught my breath, I had resolved to hike the Colorado Trail. A solo adventure suited to my period of solitude. 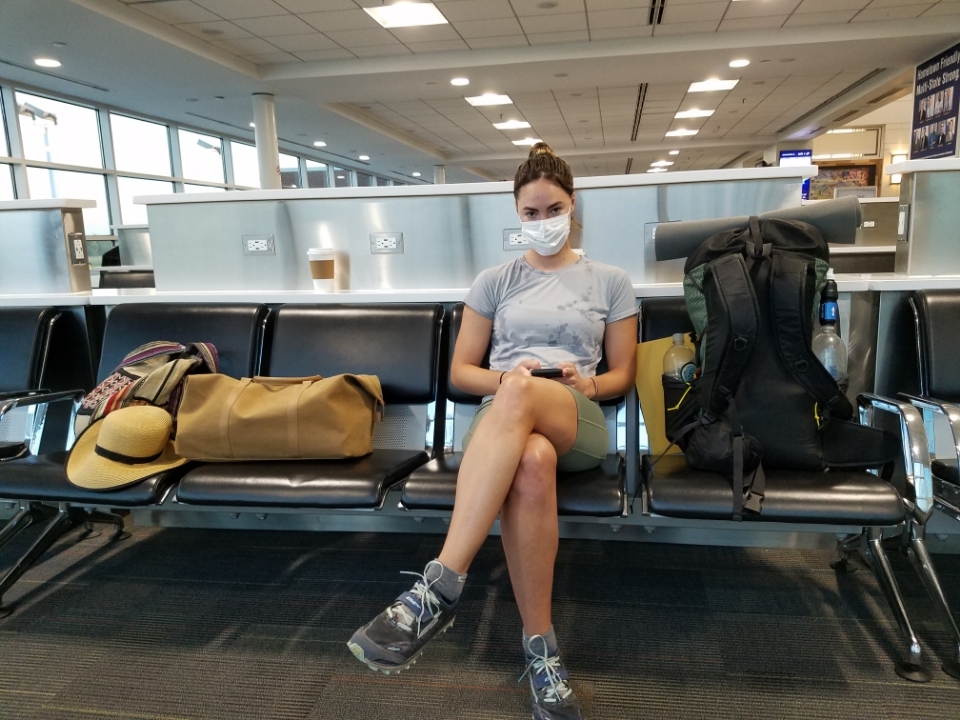 As I walked through a different airport on the morning of July 4th, I felt the specters of nervousness and fear manifesting in my nauseous stomach, in my sore neck, and stiff hips. The anxiety of doing something novel, something hard and solitary, was not new. But even still, as it stole my appetite and awakened my oldest and most misplaced fears—I wondered if something terrible was lying in wait, a tragedy wanting to swallow me up as I stood on the brink of some ineffable experience of greatness.

I boarded a skinny jet in a slow and stilted line as flight attendants and fellow passengers tried desperately to preserve each other’s personal space and abide by social distancing procedures. I slid my backpack into the overhead compartment and settled into my seat feeling weighed down by exhaustion. But when I raised my head, I was jolted by the sight of someone I immediately recognized as another thru-hiker stowing away his own pack. A pack which was even sleeker and smaller than my own. His face was obscured by a paper mask, but my interest was piqued by his lithe form–the distinctive shape of slender muscle built under the strain of covering many miles on foot. The evidence of having spent too much time under the sun revealed by his sun bleached hair and tanned skin. I thought about trying to catch him as he exited the plane at the conclusion of our flight, but ultimately decided not to chase after him. I trusted that if we were going the same way, we would see each other again. Besides, I was already exhausted and eager to get to my destination.

Denver always gives the appearance of being seated at the edge of the earth. Maybe it’s the juxtaposition between the Rockies and the range; the way that the sharply outlined farmland falls off the horizon. My uber maneuvered through the expansive brick-lined streets between skyscrapers that were distinctly modern yet somehow recalled the industrial revolution with their exposed metal struts colliding with sleek blue glass. The driver tried to warn me about bears and then started in on a litany of hazards I ought to be aware of when hiking in Colorado. I mutely accepted his unsolicited advice with second nature politeness. I find that I am often the recipient of unsolicited advice about how to manage on my own in the outdoors. This man’s compulsory fears of bears, mountain lions, and wilderness reminded me of countless comments I have received in the past from folks who find the idea of living in the backcountry for weeks or months on end so foreign and repugnant that they can hardly prevent themselves from catapulting their fears in my direction.

He delivered me to a large house near Cheesman park where I sat on the sun soaked veranda eating pretzels and swinging on a porch swing while I waited for my friends to appear. The moment of stillness allowed me to recall that I had been in a shockingly similar position exactly one year prior when I flew to Seattle, Washington, to start my southbound thru-hike on the Pacific Crest Trail. I had been unexpectedly stranded in Denver overnight due to flight delays and cancellations. My friends, Megan and Kate, had kindly collected me from the airport and offered me a couch to sleep on. I was touched by their generosity and comforted by the effortless connection we shared with one another, both then and now. I remembered that just as Megan and Kate rolled up to the house on bikes howling with an excitement that matched my own. Megan’s espresso colored curls sprang wildly in every direction as she vaulted herself from her bike into my arms. An excitable and unstoppable force of nature, Megan had agreed to join me on the first stretch of trail from the northern terminus at Waterton Canyon to Breckenridge.

The remainder of our day was infused with a bewitching sense of inhibition. The glitter of being in a foreign cityscape, on foot, surrounded by a fascinating cast of characters, featherweight with only essential possessions and unshackled by preconceptions. We picnicked in Cheesman Park, barbecued vegetarian bratwurst in Kate’s backyard, and set off contraband fireworks. That evening ended with Kate, Megan, and me sprawled over futons on the floor, talking late into the night about love and the changes we were each trying to make in our lives. The moment felt so full of peace that when a mouse appeared from beneath the stove and scurried over the tiles of Kate’s little kitchenette, no one could muster the vitriol required to chase her off.

Tomorrow, I thought to myself, I’ll be back in the wondrous world of trails, where everything is simple.