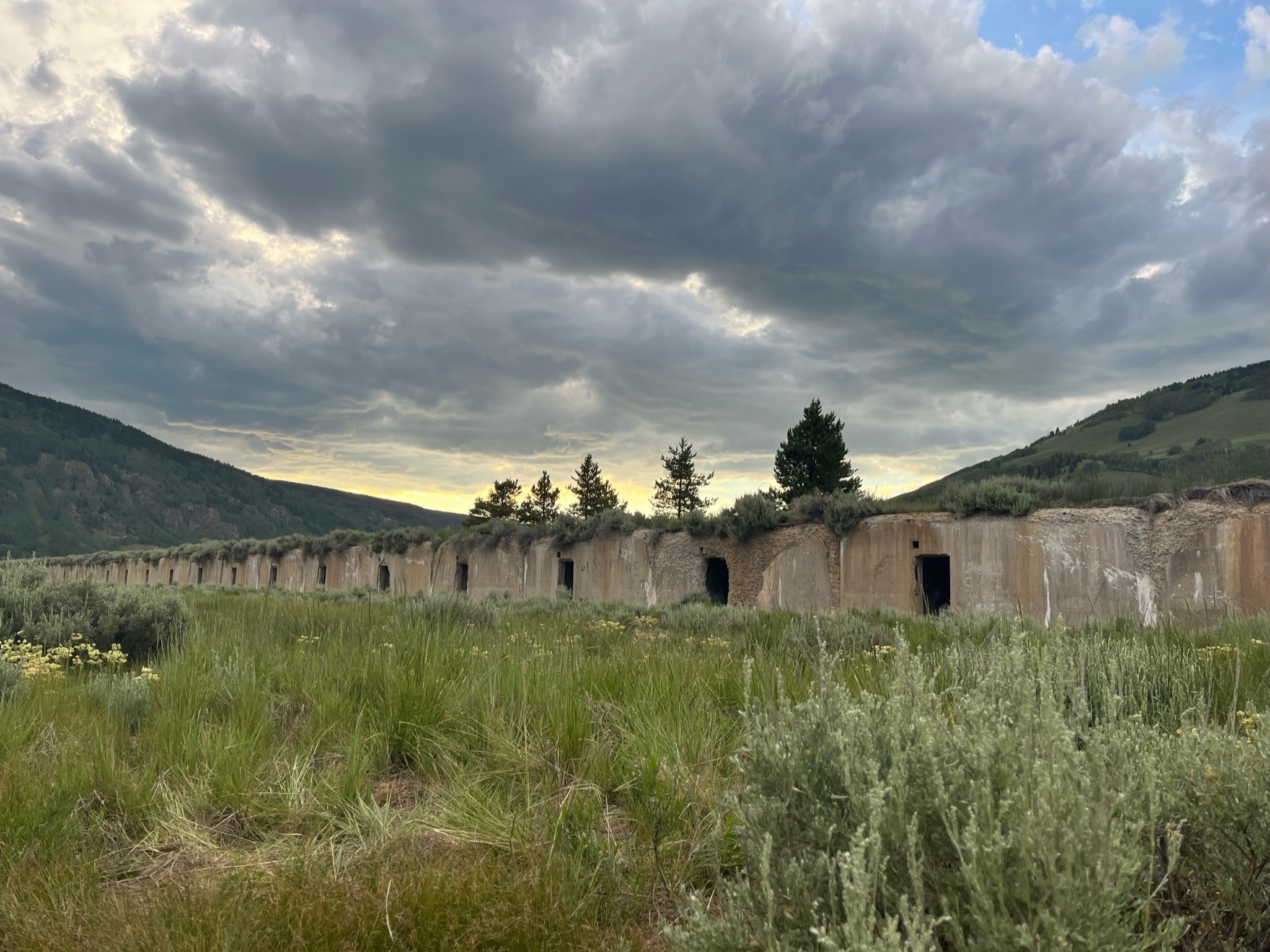 Trails are an exotic and transient world where connections form quickly, burn brightly, and then abruptly extinguish.

Sleeping beside a stranger, or a near stranger, usually isn’t very restful but there was something in Matt’s touch that I found disarming. Grounding, even. Each of us laid tucked into our own quilts. In the daze between sleeping and waking, he would reach for me and I for him. We stretch and rearrange in order to stay connected. To keep our bare skin touching. When I lifted my head from his chest, where my fingertips absently caressed his chest hair, I looked up to see a close-lipped, impish smirk cradled between his iconic smile lines.

As the sun illuminated the inside of my tent, I admired the effects of hiking written across his body. His long, muscular legs. His narrow waist and sculpted torso. His veiny arms and elegant fingers. I marveled at his beauty and wondered if he could possibly feel the same attraction. If the many months I had dedicated to hiking over the years were as apparent in my own limbs.

“Hey, sweet girl”, he said with the twangy echo of a Carolina draw. His eyes, still puffy from sleep, hadn’t quite committed to keeping themselves open but just as his thoughts were gaining traction, they turned into low, raspy morning missives.

I wasn’t sure how Matt would behave after we had slept together. Some part of me expected that his interest in me would wane and that he’d wander down the trail, never to be seen again. Another part of me wondered if he’d become cold and aloof in an effort to distance himself. If he would treat me differently or lose interest in our friendship.

When I finally started hiking, hours later, the conditions were misty, cool, and gray. I walked alone through the forest, some distance ahead of Matt, and contemplated my relationship with Luke. Over the oscillating climbs and descents, I thought about how it would feel to tell him I had been with someone else. A primal, gut-wrenching sort of shame would swell like a wave inside of me, and then another part of me–the part of me that was deliberate and unapologetic about her decisions–would stare stonily into that oceanic force until the wave broke over its own gathering momentum. Rain came down, turning the trail into a stream. Dirt clung to my shoes, my socks, and calves.

Matt and I covered, on average, about 25 miles a day. We didn’t see nearly as many people as we had on the first section between Denver and Breckinridge. Even when we encountered new hikers, they were rarely moving at the same pace. Brian and K were still somewhere behind us.

We decided to take a short side trail to summit Mount Massive, the second tallest mountain in Colorado at 14,429ft. The footpath up to the top of Massive was kinder than other routes up big mountains I had summited previously. I steadily gained thousands of feet in elevation over the course of a few short miles, winded but markedly more acclimated to the elevation than my last trek up a mountain of similar stature.

As I wound through a meadow of recently thawed hillsides and fledgling wildflowers, I took lungful after lungful of thinning air and felt on the edge of dissolution. Tranquil, exhausted release. The barren landscape was jarring and soothing all at once. Open sky, silver-grey boulders perched like giants resting in strange poses, and melting snowfields mimicking the texture of the ocean. All grays, whites, and blues. The absence of green was startling and surreal.

Near the final stretch of the assent, I came upon Matt, who had hiked ahead of me.

“Are you okay?” I asked. I was surprised to see him. He was moving at such a quick clip, I had assumed I’d see him at the peak.

“Yeah,” he assured me with a hint of confusion that mirrored my own.

“Yeah,” he said with a soft laugh and smiled a very small, tentative smile. He rose to his full height as I moved toward him, trying to balance myself on small, knobby rocks. I collided with him in a wobbly, forceful attempt at an embrace. With my arms around his neck, I breathed a quiet thank-you into his ear.

I was touched that Matt had waited for me so that we could summit Massive together. Touched because the gesture signaled that the togetherness of the moment was more important than a little bit of extra time spent at the ceiling of this little parcel of earth.

Matt and I traversed the knife’s edge to the summit in a four limbed scramble. My head felt metallic and light, craving for iron, but sturdy all the same. We were the last ones to reach the peak that afternoon, a function of our lazy morning start, and the black clouds above chastised us. 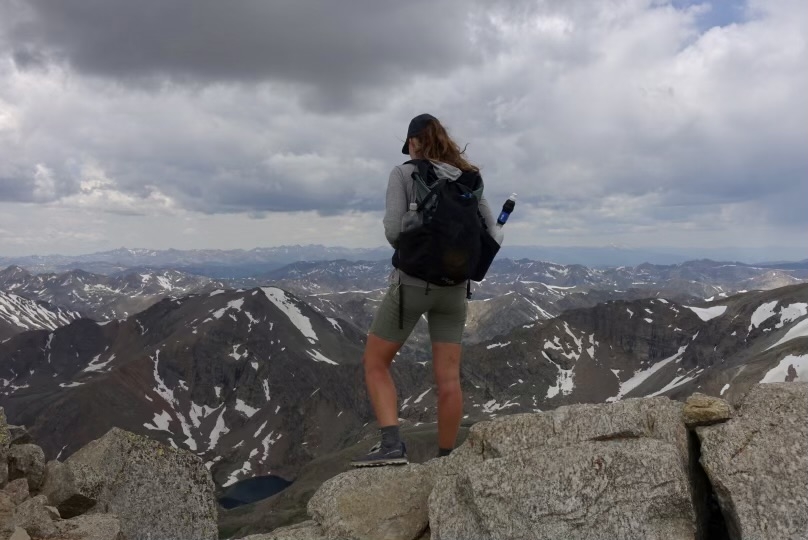 Snowflakes, small and dry, fell like congratulatory kisses, glancing gently off our shoulders and crowns. I stood at the edge of the highest point and made eye contact with the ocean of grey, snow capped mountains cropped endlessly against each other and the infinitely expanding horizon. Marmots gave us companionable company, curiously casting glances our way in hopes we’d leave some food behind. A scruffy yet mythic-looking white goat appeared but only for the briefest passing moment. He dipped out of sight as quickly as he had appeared, heeding the warning of the thunder clouds building overhead.

Even though it had only been a couple of days since Matt had made the transition from sleeping in his own tent to mine, all sorts of dynamics were shifting between us, and not always gracefully. Thru-hiking is immersive and all-consuming. A romantic relationship in that setting assumes rapid acceleration and intensity. As if we had gone out on a first date that just kept going. And it could end at any moment, as abruptly as it began.

As we lay in the darkening hours of early evening, we began to talk about the next trail town we’d reach—Twin Lakes—which was just 10 or so miles ahead. Neither of us had any sense of the town’s size, if it had lodging options or somewhere we might snag a shower. But nestled together at the foot of Mount Elbert, we couldn’t resist fantasizing about bubble baths and soft bed sheets.

The following morning, I cinched my pack as tightly against my body as I could manage and began to run. It was a little awkward, all my gear jostling on my back. But my steps were slow and methodical, a carefully controlled and continuous form of falling. My heartbeat spiked, unaccustomed to this particular movement, yet the pulsing plateaued as I found a familiar rhythm.

I came upon a junction in the trail where a woman, a hiker, leaned against the signage posted. She seemed to be taking a break, but where she’d positioned herself had inadvertently thrust her into the position of explaining to travelers which way they were headed. One trail, short and steep cut in a more direct path down to Twin Lakes. The other, the Colorado Trail, continued south and crossed beneath a highway a couple miles outside of town.

She had a thick braid of silky brown hair cascading over her shoulder, a sultry low-pitched voice, and a Monroe piercing that winked like a dimple when she smiled.

“Well,” she started, “I suppose that depends on what you’re looking for.”

Her answer sounded sage and cryptic, her accompanying smile knowing and serene.

“The trail is that way,” she didn’t bother looking at the sign but pointed with a trekking pole instead. “I’ve hiked it before. All of it. A couple of years ago. This is my second go-around.”

“Your second time thru-hiking the CT?”

“Oh? I saw a mountain goat on top of Mount Massive yesterday.”

A moment passed between us and I wondered if she was silently appreciating the foreshadowing of that meeting as a precursor to this one, just as I was. I liked her immediately.

I continued on the CT. When I emerged from the forest, I was greeted with a spectacular view of two enormous bodies of water seemingly held in the palm of the impossibly steep terrain at the lakes’ perimeter. A single lane highway came into view and along with it, the tiny town of Twin Lakes.