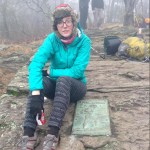 Conversations With Hikers And Beer

So there I was, at a hostel in Burlington, VT, exactly four days after I’d set out to hike Vermont’s Long Trail. I was catching a bus to Jersey the next morning because Life, as she often does, had Happened. That’s how I came to find myself sitting on a hostel floor, drinking beer and having a fascinating talk and with three other former AT hikers. Two had recently quit their endeavors — one had summited Katahdin a month earlier.

With their permission, I recorded our conversation.

Here are the profiles of two very different hikers, in their own words.

For me, it had nothing to do with the Appalachian Trail. I’m not stopping to enjoy any of it. I could have done it on any trail. It had to do with building a skill set. I wanted to be able to sleep in the woods. I realized, I’m soft. Didn’t enjoy the hiking. The hiking itself, couldn’t care less. Beautiful views, couldn’t care less.

I enjoyed the solitude. I actually felt a lot of resentment towards the AT, because I was never alone. Every time I was on a mountaintop, I was with someone. And I don’t process things, I don’t take things in if I’m with a stranger. I would rather not look, than look and feel nothing.

But you need a tether on the trail. Even when I was hiking big days, you have to have a tether, another person to bounce off of. Because otherwise, you’re just disconnected, just wandering through the trees, and it means nothing.

I enjoy Type 2 Fun, where it sucks in the moment, but later, you’re like, “That was awesome!” It was a lot of fun. A lot of fun. Just not the same fun everyone else was having.

I had this idea, going out there, being surrounded by people who are a little more gentle in spirit, more relaxed, — because, I’m not a relaxed and friendly person. That’s not how I engage. But I thought that being around people like that, some of it might rub off, or I might start to appreciate it. Didn’t happen. But, I learned that… that’s okay. I don’t fall in love with mountaintops. A lot of people were taking in every moment, but I will never connect with the world in that sweet and warm way. Everyone has their place. I do belong here. And I did, on a level, need them, to remind me that it isn’t something to be taken, or broken, but it’s also a source of joy.

I thought I was gonna be a tree-hugging hippie at the end. And look at me now.

I just graduated high school, and I was really set on the AT. I’ve gone on hiking trips before, and I thought it was a match made in heaven. But I found out it’s more than just hiking. The culture and all that. So I got off trail, did the Colorado Trail. And the views were amazing, but after a while, a view is a view. I came back to the AT, but… I just thought, I’m gonna put it to rest. I’ll be back. I’ll definitely hike the entire Appalachian Trail before I die. I think the AT is something I have to do.

When I came back from the Colorado Trail, I tried getting back on the AT three different times. The last time, I did five miles. I was crying and I’m still trying to come to terms with, like, I’m not doing this now. There’s another point in my time when I’ll definitely do it.

I think part of it is social pressure. I told all my friends, I’m hiking the AT, I’m gonna be a badass, I’m doing this — never mind that I’d already hiked close to 500 miles on the Colorado Trail. I think part of it was also, like, I didn’t know what to do. I had all this time. I had three months, and the AT — you don’t need to sign up, you don’t need to apply. You just go out and hike. And I felt like I needed to.

The last time I went out, I hiked about five miles. I got to a shelter and went to sleep, and when I woke up, one of the guys I summited with in Maine was in the tentsite; he’d come in around ten o’clock. And he was like, “Oh, man, I’m so happy you’re back! This is great!” But, obviously, he was doing big miles, and I was taking it slow. So… there was a deli where I met up with him — before that, I had decided, I’m done. I can’t come back. My mom was gonna come pick me up. I remember being so embarrassed, because I’d already quit once in front of him, so I told my mom to wait an hour, just so he wouldn’t see me getting off the trail. It was hard. But I went home and started researching things I could do that weren’t the trail.

One of the things I haven’t been able to quite identify — the Appalachian Trail specifically, I just get so overwhelmed by it. I have these mini panic attacks. I used to get panic attacks when I was younger. I did a thirty mile day in the Hundred Mile Wilderness to get into Monson — I was only going to do twenty, but I had a panic attack and was like, I need to get out of here. I just need to get out. So I busted another ten. But on the Colorado Trail, I didn’t have any panic attacks. I had a great time. I don’t know. I’m still trying to figure it out. Because, like, I keep thinking, I could go back, I want to go back, but then I get back and it’s like, shit, it’s happening again.

I get really competitive with people. I wrestled all throughout high school, and it really drilled into me, the competitive mindset. That’s something I’m dealing with. I’m realizing I need to relax a little, take the edge off. I think I marked myself against the people. It didn’t feel healthy. I didn’t feel like I could continue with that mindset for the next 2,000 miles.

I’ve found with the trail, you just have to be flexible.

Thanks to the Burlington Hostel Crew for their in-depth, soul searching conversation. Perhaps these candid thoughts will stir something in you, reader, that helps you understand your hike (of whatever duration) or maybe even yourself a little better.

I'm Amalia (Toastface, for short). I completed a SOBO thru-hike of the Appalachian trail in 2014. I was moved to hike the AT after a shocking yellow belt test in an adult Tae Kwon Do class, wherein I realized I didn't trust myself. Now, I'm on an unstoppable journey towards self-discovery and/or death.