AT Thru-Hikers Footwear by the Numbers

One of the many weird, but cool, things about hiking is that you are basically your own car.  Your food is like gasoline: it is more expensive the further north you go, and you always consume more than you expect you will need.  Your legs are the axles, your feet are the wheels, and your shoes are the tires.  I, for one, over-prepared where food and clothing were concerned, but I grossly underestimated the abuse my feet would undergo on the AT.  Consequently, I underestimated the efforts I should have made to take better care of them.  Specifically, I really didn’t put much thought into the footwear I chose (I just unearthed my four-year-old hiking boots from the garbage bag under my bed and went, “these trusty ole boys should work just fine”).

Among long distance hikers with more experience than I had, “boots or trail runners?” seems to be a common conversation topic.  In her post on winter-specific gear, Appalachian Trials writer Carlie Gentry pointed out that boots are better in the snow, even though she prefers trail runners in the summer.  During my own thru-hike, I saw die-hard enthusiasts of both.

In an effort to answer the “boots or trail runners” question and to help new backpackers weigh their options, the brilliant Zach Davis surveyed 107 AT backpackers from last year (including 77 thru-hikers and 20 hikers who walked over 1,000 miles). 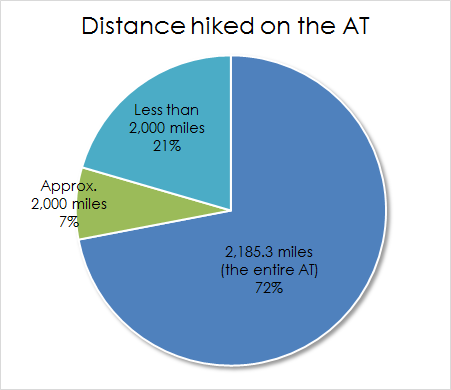 In addition to footwear type, the survey also asked about the brands of shoes hikers wore on the AT. 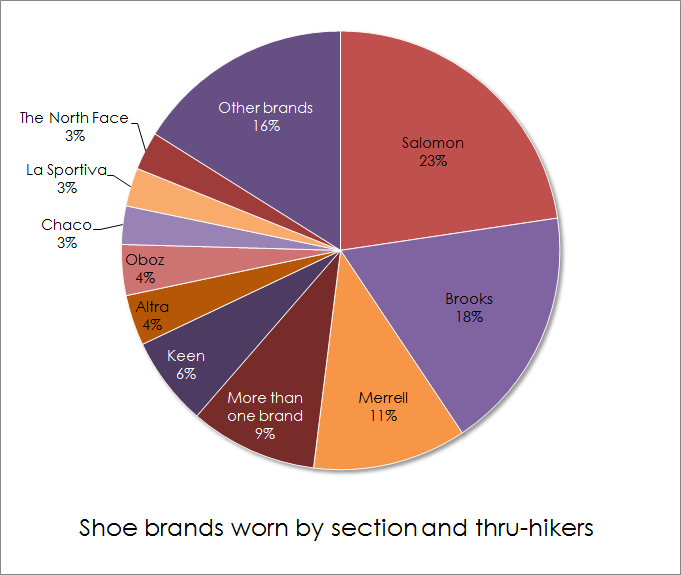 The most popular brand was Salomon, worn by almost a quarter of AT thru-hikers, followed by Brooks and Merrell.  Nine percent of hikers in the survey wore more than one brand of shoes.

I wanted to see whether these hikers switched intentionally (for example, if they planned to use boots in the cold months and trail runners in the summer) or if they switched out of eventual dissatisfaction with their first choice (like I had on my thru-hike). 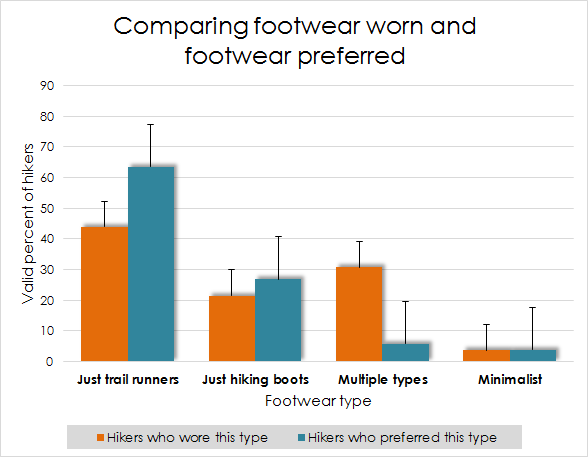 On an important side note, five hikers had so many foot problems and shoe switches that I just categorized them as Strugglin’ and excluded them from the analysis of footwear preference.  Although I removed them from the comparison, these strugglin’ hikers are notable; they demonstrated impressive determination, commitment, and badassery by pushing through that pain.

Clearly, the majority of changes in footwear type were unexpected or unplanned.  I’m sure that most of the surveyed hikers, like most AT thru-hikers I know, had never walked that far before, so they weren’t really sure what shoes would work best over time.  So, I wondered if the distance hikers walked was related to their footwear type. 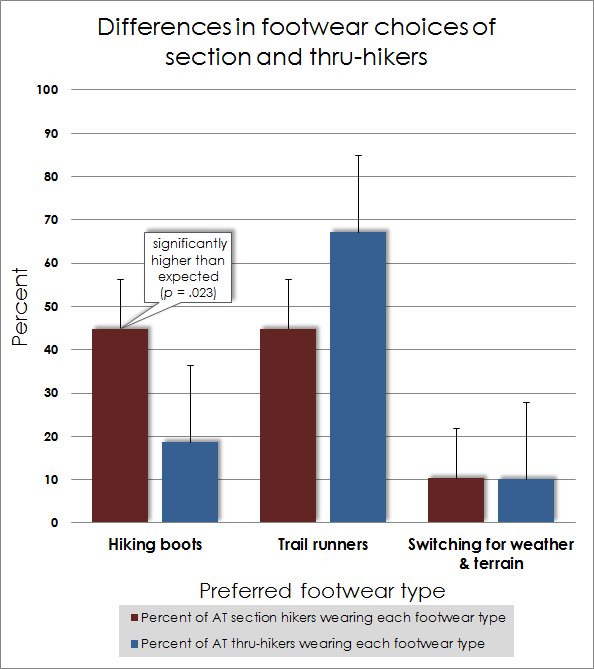 Based on this survey, it seems that trail runners are the most popular footwear type among long-distance hikers on the AT, although a substantial number also prefer traditional boots, while a minority of hikers prefer minimalist shoes or switching out their footwear according to the terrain, and a few suffered such foot pain and injury that no footwear type was sufficient.  It also seems that section hikers tend to stick to the traditional hiking boot more than thru-hikers do.  Trail runners appear to be the most popular option, especially for thru-hikers, but there are certainly good reasons for each preference.

Some of the most common reasons that the hikers in the survey preferred boots were that they offered better support on rocky terrain and that they were warmer during the cold months.  Several boot enthusiasts also thought that boots last longer, and some chose them because they were more conveniently available for circumstantial reasons. 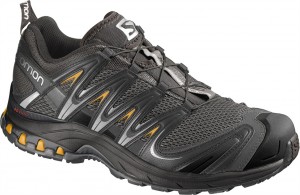 The most popular footwear brand overall was Salomon, and the most popular boot model was the XA Pro 3D, worn by 6.5 percent of the hikers in the survey.

Some of the most common reasons the surveyed hikers said they preferred trail runners were that they dried out faster than Gore-tex boots, they weighed less (my main reason for switching), they were cooler in the warm months, and they were more amenable to foot swelling (a frequent problem for thru-hikers that many of us had never experienced on shorter backpacking trips). 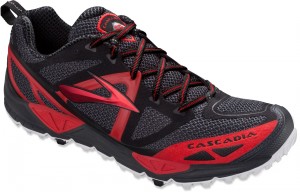 The most popular trail runner brand was Brooks, and the most popular models were the Brooks Cascadias, worn by 16.8 percent of the hikers in the survey.

Of the hikers who wore minimalist shoes, it seems that a few did this for temporary relief from blisters and/or swollen feet, although those who hiked exclusively in sandals or Crocs seemed to do so just to do something adventurous and different.

To any of you currently preparing for your first long distance hike, the popular shoe brands and models are certainly good choices, but carefully consider the temperature, snow possibilities, and terrain types you expect to cover before choosing your footwear (and your other gear, for that matter).  Also, keep in mind that 1 in 20 of the hikers in our survey experienced severe foot problems and subsequent shoe problems.  If possible, I suggest testing out different shoe types and breaking in more than one pair of shoes before you set out.

Limitations of the survey

It is possible that hikers with interesting footwear stories, particular difficulties, or particular enthusiasm for gear and footwear discussions were more likely to want to take the survey.  So, they may not be representative of Appalachian long-distance hikers more generally.  However, the variety of footwear types represented, the reasons for choosing them, and the brands represented seemed pretty similar to what I saw in my five months on the AT last year.

Many thanks to Zach Davis for creating and conducting this survey, and for giving me the opportunity to combine my love for stats and the AT.

Many thanks to all 107 hikers who took the survey. You guys rock! I saw many familiar trail names, including the Crocs-wearing southbounder – I’m glad to see you made it all the way in those!

Got any questions about what footwear to wear? What were your footwear experiences on the AT? Comment below.