Former University Professor Held on Suspicion of Arson Near PCT

A 47-year old man is being held on suspicion of starting numerous fires in Northern California, including three near the massive Dixie Fire.  Dr. Gary Stephen Maynard has officially been charged with starting the Ranch Fire northwest of Susanville, CA on August 7.  However, an intensive investigation has implicated his involvement in at least five fires.

The former lecturer at Sonoma State and Santa Clara University is being held without bond in a Sacramento County Jail and has been charged with felony arson.  However the investigation is ongoing and may result in further charges.  A preliminary hearing is scheduled for August 24.

The efforts by federal investigators linking Maynard to the Conard, Ranch, Moon, Everitt, and Cascade Fires are nothing short of incredible.  As reported by Wildfire Today, the use of near-real-time cell phone tracking and vehicle tracking allowed responders to follow Maynard’s movements over weeks.  By keeping an eye on any suspicious activity such as long stops in remote areas, each of the five fires was extinguished before growing beyond 1 acre.  Responders were able to suppress them before the dry conditions created by persistent drought enabled them to grow out of control.

Risk to the PCT

The Dixie Fire has consumed over 500,000 acres of forest, including a significant portion of the PCT between Bucks Lake and the Lassen Volcanic National Park.  It has affected multiple PCT trail communities with either direct threat of burning and evacuations, or with dense smoke.  While the Dixie Fire still poses the greatest threat to the PCT and these communities, the additional fires allegedly started by Maynard would have put responders to the Dixie Fire at significant risk had they had time to grow. 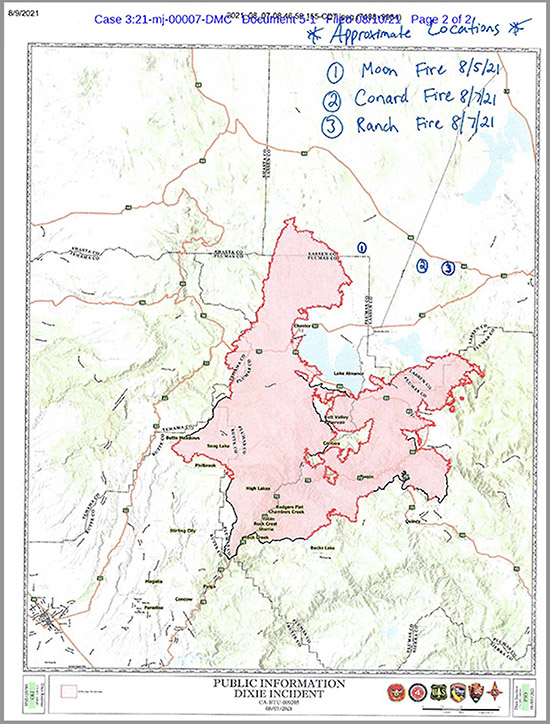 Map showing the locations of the three fires started near the Dixie Fire. Photo via

Maynard first became known to authorities on July 20.  A US Forest fire investigator, Brian Murphy, found him with his vehicle stuck in a ditch on the side of an unmaintained forest service road.  Murphy was responding to reports of a fire in Shasta-Trinity National Forest, later named the Cascade Fire.  Maynard was only 200 yards from the fire and acting suspiciously.  Murphy photographed the car and took measurements and further photographs of tire tracks near the fire.

The next day, July 21, similar tire tracks were discovered near the site of the Everitt Fire on the west side of Mount Shasta.  Investigators declared the cause of that fire to be arson as well.  At that point, Murphy applied for warrants for near-real-time phone tracking and vehicle tracking for Maynard’s phone and vehicle.  California Highway Patrol used the cell phone data to find and pull him over, allowing Murphy to attach a tracking device to his vehicle.

Using this tracking data, investigators were able to follow Maynard’s movements hundreds of miles to an area north of the PCT community of Chester, which narrowly survived the advancing Dixie Fire.  On August 5, a US Forest Service officer responded to the Moon Fire minutes after Maynard drove through the area.  With the help of an engine crew, the fire was kept to just a few dozen square feet.  The cause was determined to be arson.

Two days later on August 7, investigator Murphy hiked into an area where tracking showed that Maynard had been parked for 28 hours.  There he discovered the billowing plume of the Ranch Fire, less than one acre in size at the time.  After extinguishing the blaze, investigators with Cal Fire deemed its cause to be arson.  Nearby tire tracks matched Maynard’s.

Further scrutinizing the tracking data, 6 minutes after leaving the sight of the Ranch Fire, Maynard made a 30-minute stop at a place where investigators later found the 1-acre Conard Fire.  The cause of this fire was also determined to be arson.

Maynard was finally apprehended when he returned to the site of the fires a few hours later.  He was brought to Lassen County Jail and charged with entering a restricted area (closed due to the Dixie Fire).  Later, a felony arson charge was added for starting the Ranch Fire, according to the criminal complaint.

Maynard is being held in Sacramento without bond due to the ongoing risk presented by an at-large serial arsonist.  As stated in his detention memo from August 10, obtained by Wildfire Today, “arson is a dangerous crime and it is a crime for which it is particularly difficult to fashion conditions of release.  Here, the nature of the circumstances of Maynard’s arson offense show that he is particularly dangerous, even among arsonists.”

“Words cannot describe this additional threat to firefighters and other emergency personnel as effectively as the map attached as Exhibit 1 to this memorandum . The map shows the boundaries of the Dixie fire where firefighters are laboring to protect the public at significant personal risk. The map also shows where Maynard set fires on August 5th and 7th behind those fire lines. Maynard’s fires were placed in the perfect position to increase the risk of firefighters being trapped between fires. But for the dedication and efforts of U.S. Forest Service investigators working around the clock to track Maynard, those fires would not have been discovered in their infancy. With Maynard’s growing fires at their backs, firefighters would have been placed at much greater risk.”

Featured image of the Dixie Fire via