From snow to mosquitoes 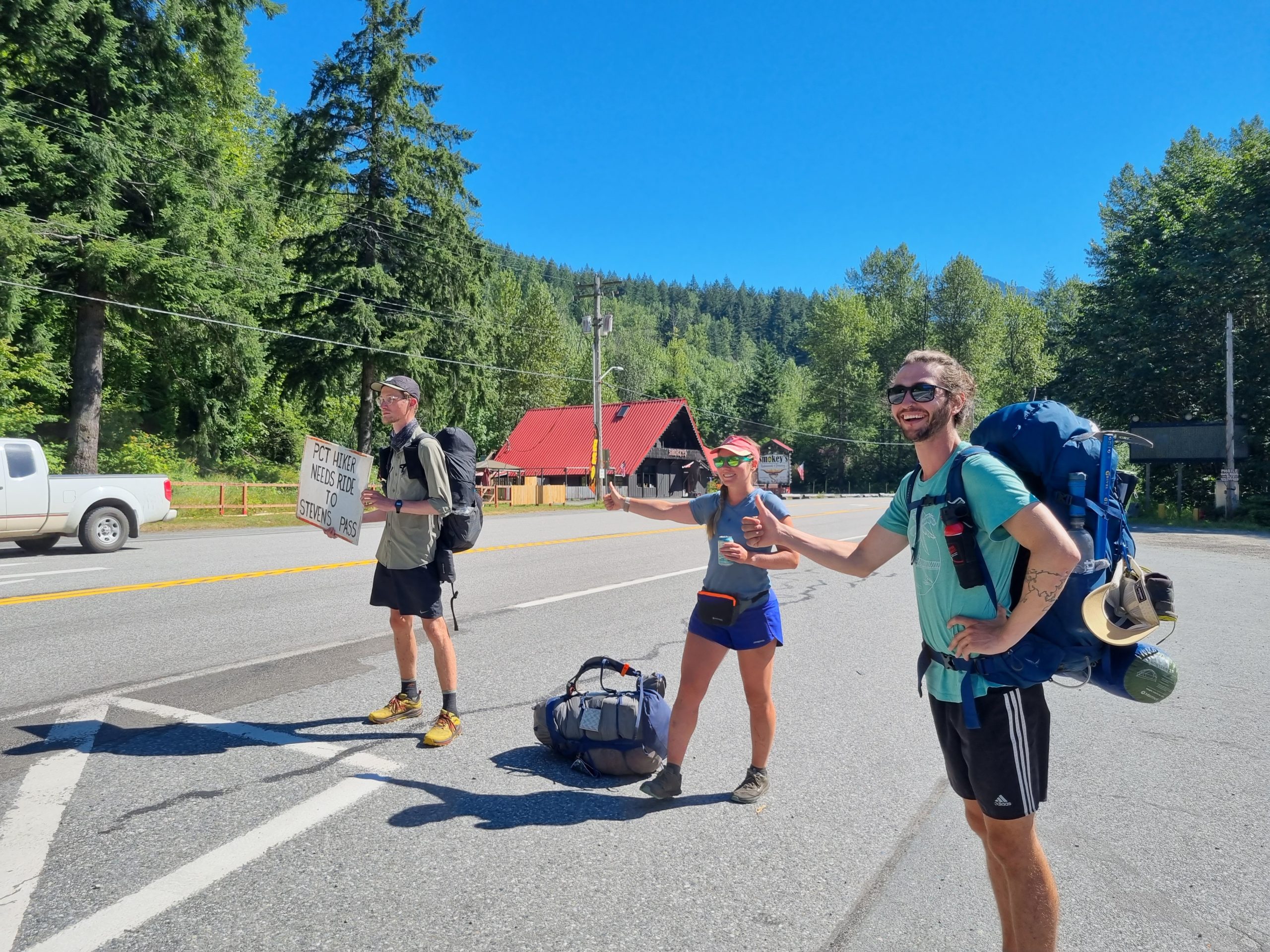 We slept later than usually and had breakfast at the great Cascades Lodge in Skyskomish. It was super hot already by 11 a.m. and we hitchiked in two pairs to Steven’s pass. Three of us had to stay in the town and wait for their postal packages.

As always here (as opposed to Sweden) it was easy to get a hitch and we started our endles climbing day. First up to the ski lifts, then mountain after mountain. It was around 35 C and I was dying of heat in the windless uphills. We took a lunch and swam in one of the lakes, I even swam in another colder one. This section goes through Alpine Lakes Wilderness and it is very beautiful. There was some snow left but I didn’t use my microspikes at all that day!

Totally I had ascended 4000 feet and descended 3200 feet in only 8 hours. My bag was extra heavy as I was carrying a beer, wine and more food than on the previous section in order not needing to beg food from others again.

We camped by Glacier Lake that still was partly surrounded by snow. 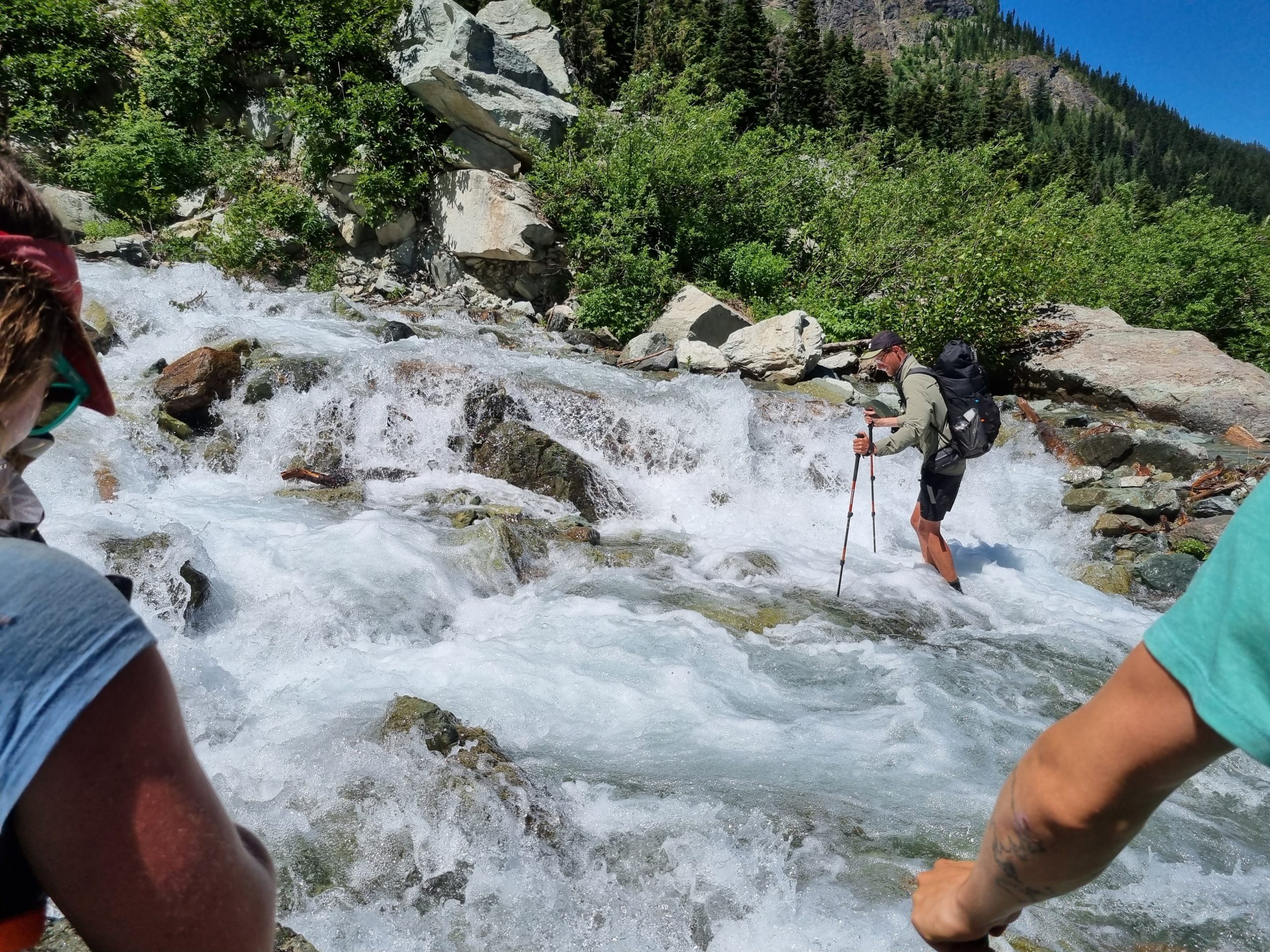 We got up at 6. I was eating breakfast on a rock by the Glacier Lake, the other ones skipped the breakfast as usual. The trail started with an uphill and summiting Piper’s Pass. It was still a bit snowy and on the other side of it there was a traverse that had partly melted. Skratch went on without spikes, I was just putting on my spikes and axe as Pocahontas approached from below, slipped and fell at least 10 meters on the melted slope. We were watching horrified and Chandler yelled: “Push your toes in!” He managed to survive with small skratches but I decided to climb the hill over the melted trees in stead of trying it that snowy traverse.

It was a very hot day, at least 35 C. We had a couple of sketchy rivercrossings. The second one was the worst so far. We had to first do a bit of rock climbing before we reached a wider spot where a nobo instructed us to cross. Just as the last one of us was crossing Rebound appeared from the mountains and joined us. The nobo told it was a worse river crossing than he had experienced anywhere in the Sierras.

The afternoon was a hellish climb on a sunny, windfree switchback with a three mile climb up occasionally crossing humid mosquito swarming bushes. I was dying of dehydration although I already had drank liters of water. The rest of the day was downhill.

Me and Rebound were behind the others and after coming down we had to cross two rivers that were full of mosquitoes, at a level that resembles the Swedish Lapland. As I had no long pants, mosquito net or any poison on me I panicked totally and my sandals started whirling in the strong current. At the same time Rebound lost his sandal in the stream but he managed to fish it up through some bushwacking. I also had to fill up water in this horrible place.

We had missed out the others, possibly they continued on. We came to a place where a couple were sitting naked in their tent. We set up our tents and drank some of the wine I had carried for my birthday celebration, a too heavy load at these climbs. 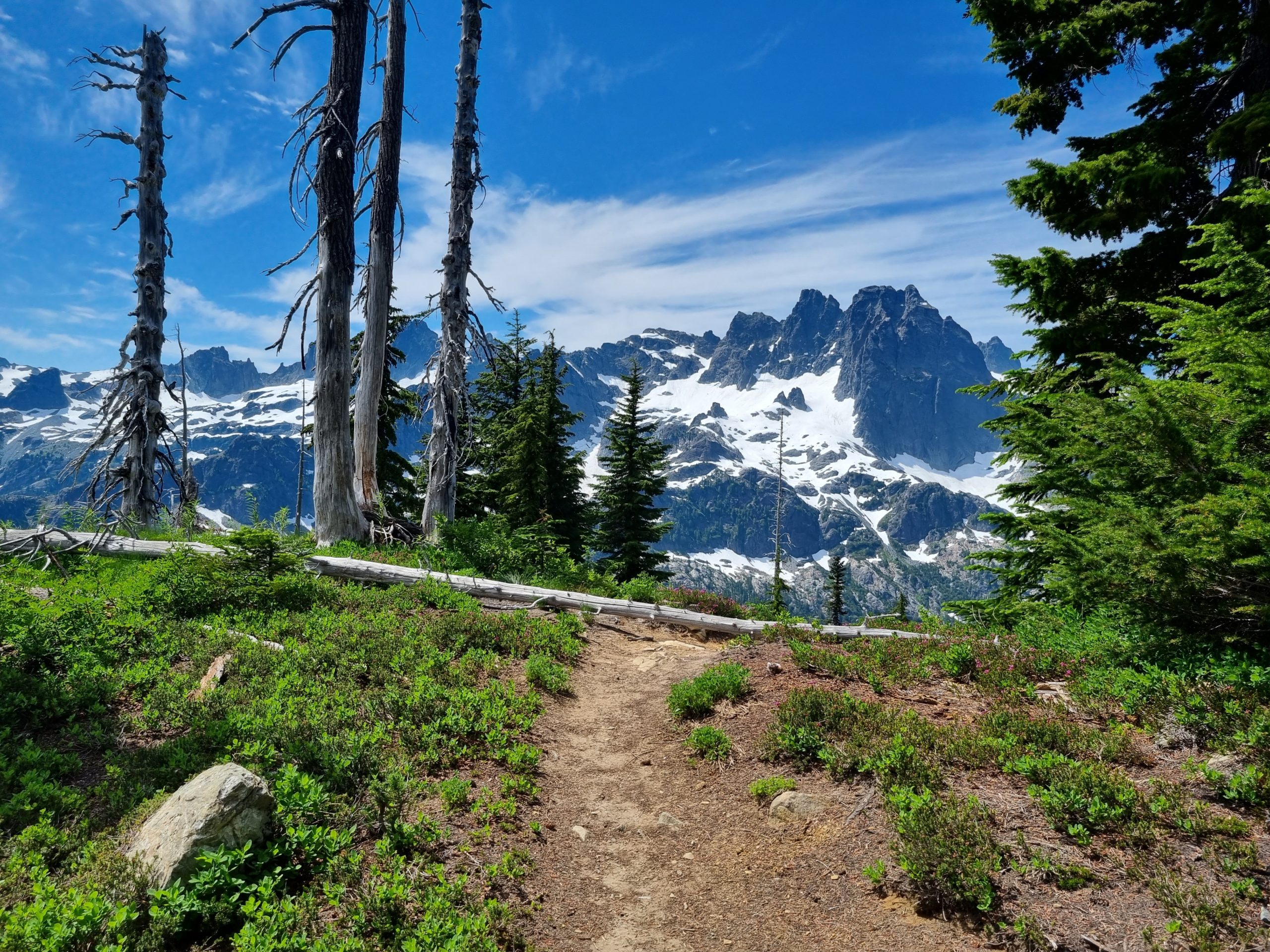 I woke up at 05.30 and witnessed the most beautiful sunrise at camp so far. Three deer came to the camp before we left. It was a long downhill before the first creek. On the way we met Scratch whom we lost the previous night together with Chandler and Pocahontas. She said they camped by a horrific mosquito lake and some agressive deer came into their camp all through the night.

I met a nobo that said he just saw a bear nearby. I put some disco out loud from my phone and soon I heard branches crash in the forest. And there it was, my first bear encounter in nature. A beautiful fat big golden brownish blackbear (they are often not literally black). It was running away but stopped and turned to look at me. I continued on without starting to take photos.

It was a freaking big uphill today. Basically we were climbing up one half of the day and down the other half. That is over 3000 feet up and over 4000 down. It was also crazy hot, at least 35 C without a lot of shade and I was just dying. I have never been sweating so much, I drank probably 4 liters of water. But thos days trail was also crazy beautiful, it looked just like the pictures you see of The PCT. Me and Skratch lost the guys until evening and there was no really chance for long breaks as the mosquitoes and biting flies were agressive everywhere. I did throw myself into a stream, though, since it was so unbearably hot.

I came back dead to the chosen campsite before 6 p.m. and we made a campfire, something you don’t do on the trail so often. Much less mosquitoes at this campsite even if it was by a creek again. 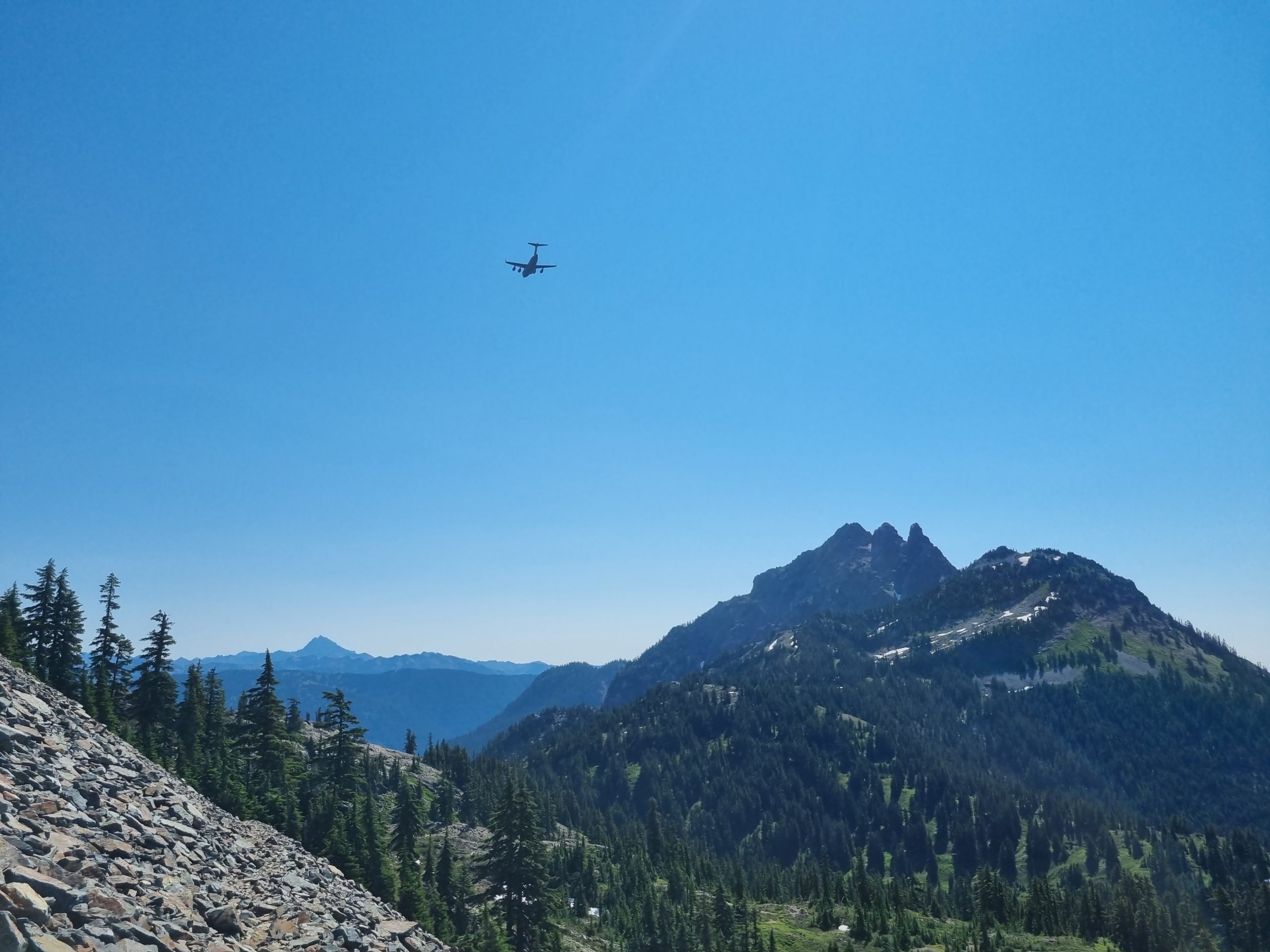 I woke up at 5 to eat my porridge and coffee. Everybody else eats their breakfast on the trail hours later. It was a hot steep climb on an exposed switchback. The hottest day on trail so far. We climbed in total around 5000 feet, of which most was directly in the sun on exposed switchbacks. I was about to die. If you tried to stop in a shadow the mosquitoes would bite you everywhere. They are really aggresive now. Also the trail was very stony and there were many rockslides after the snow melt. The views were absolutely amazing though, but it was too hot to stay in one place and enjoy them much. We had to only cross a couple of snowpatches. The switchbacks have also a quality that I call “the switchback effect”; when climbing a steep switcback up and you suddenly need to take crap really badly. It is like the gravity wants to pull out all the peanut butter you ate before out right at that moment. Also my fellow hikers have experienced this phenomen. Recommended for anyone having a tarmal blockage.

We ate a lunch in the middle of a trail and as we were sitting there Juicy walked in. He had been stucked in Skykomish a couple of days because he lost his credit card. Crock is still behind us since he was waiting for his tarp that flew away in a wind but some guy had found it and posted it for him. Also another hiker has carried my gaiters that I forgot in Mazama all the way to Snoqualmie. That is real trail magic.

We found a campsite by a cold lake and I jumped into it immediately. We had to eat dinner with our mosquito gear on because these creatures never leave us alone. 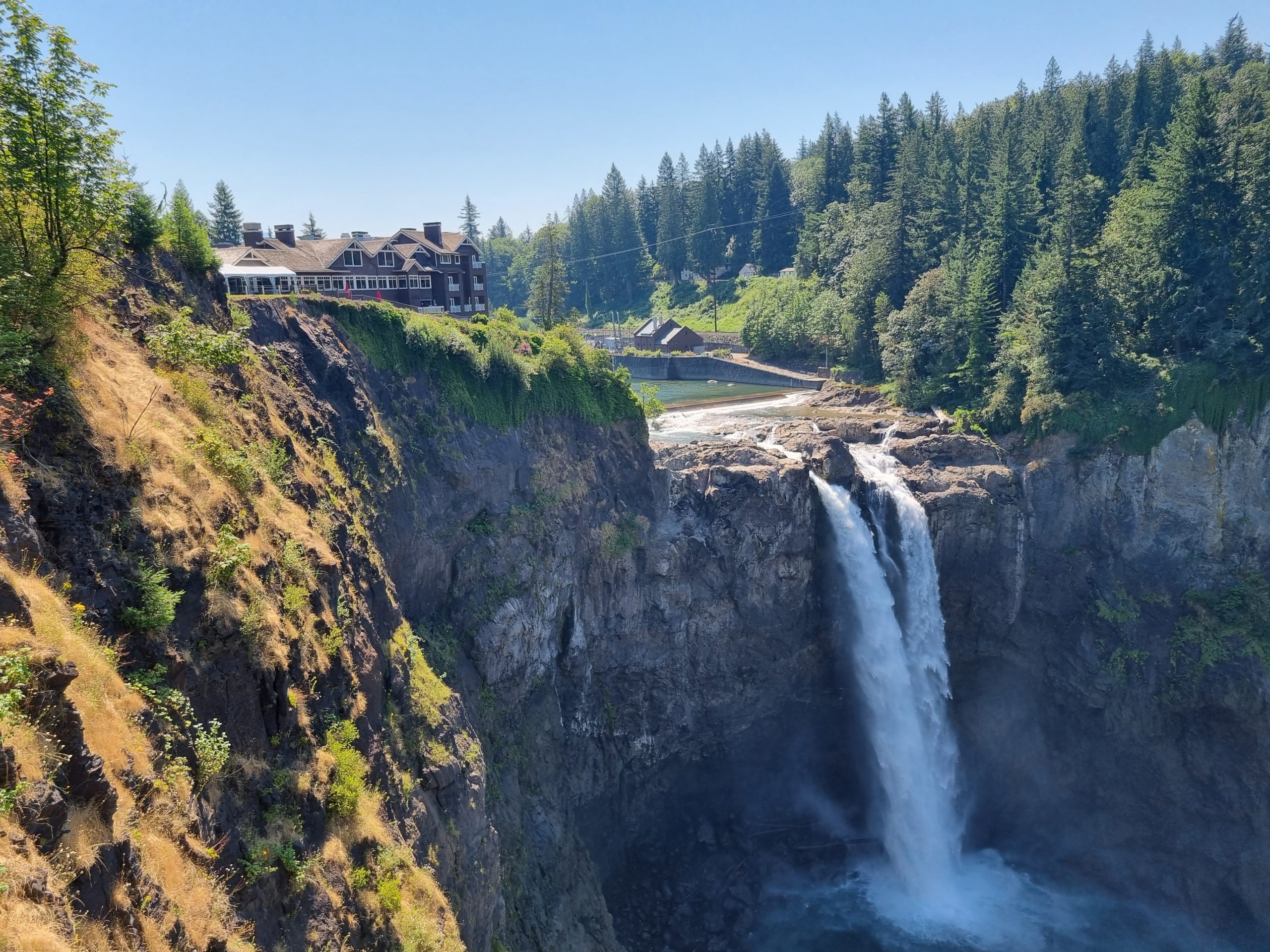 A hiker is never faster than going to a town. We did 7 miles in three hours. Got a hitch with a friend of a friend to North Bend. Got to visit some sights from Twin Peaks, such as Tweede’s Cafe and The Snoqualmie Falls. I had a chance to stay at this guys place outside of Seattle, to do some laundry, have a shower, resupply, visit two different REIs and have a Vietnamese dinner with a beer. I could even leave my iceaxe and microspikes for him to send to California, so from now on I will be able to hike without carrying them!