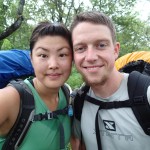 Your Definitive Gear Guide for Repelling Mosquitoes (and Other Bugs)

I’m not really an insectophobic (a person who fears bugs) but that is the closest word I could find that describes my feeling toward insects.  I hate bugs!  I suppose it isn’t fair to all bugs for me to say that, so I should narrow it down to bugs that bite me.  I hate hate hate and want to kill kill kill bugs that bite me!  Therefore, when I see bugs that I know have the potential to bite me, I get very stressed out and annoy my husband.  The reason I freak out is because my bites swell and itch like a mother-f*cker.  If I’m not on any allergy meds, the bites will be swollen for days and can itch for weeks.  It makes my life (and therefore my  husband’s life) hell!  I can already hear you naysayers out there calling me a baby and that most people swell and itch when it comes to mosquito bites.  Well, I was imported from South Korea and the doctors told my new parents that I might “react differently to bug bites”.  That was an understatement.  Alex, my hubby, lovingly describes me as a freak to those who have not yet witnessed the show.  Here are some pictures to illustrate my living nightmare. 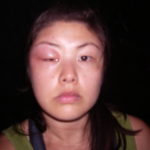 This is what happens when I’m bitten on the eye lid. 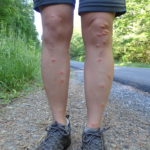 Gnat attack on my legs. 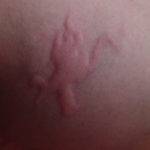 Weird swelling from a mosquito bite.

For my eye, I did not feel it happen and there were not many mosquitos around, hence my lack of protection.  All of a sudden, it became hard to blink.  I immediately took some allergy medication but my eye stayed swollen like this for about 3 days.  It was so awkward passing other hikers.  Alex believed people thought he hit me which made us act extra suspiciously happy around them.  Mosquitos aren’t my only enemies.  Gnats, no-see-ums, flies – all love to feast on me!  Gnats bites don’t swell as much as mosquito bites and go down much faster, but they turn a dark red/purple and stay that way for a good week prompting people to ask “what has been chewing on me”.  The last pic is of a mosquito bite that sprouted little tendril buddies so it looked like I had something growing in my skin.  It swelled to about half the width of my calf in this lovely design.  I’ve not been officially diagnosed but I believe I have “Skeeter Syndrome”, an allergy to mosquito bites.  It’s a real thing!  Look it up… 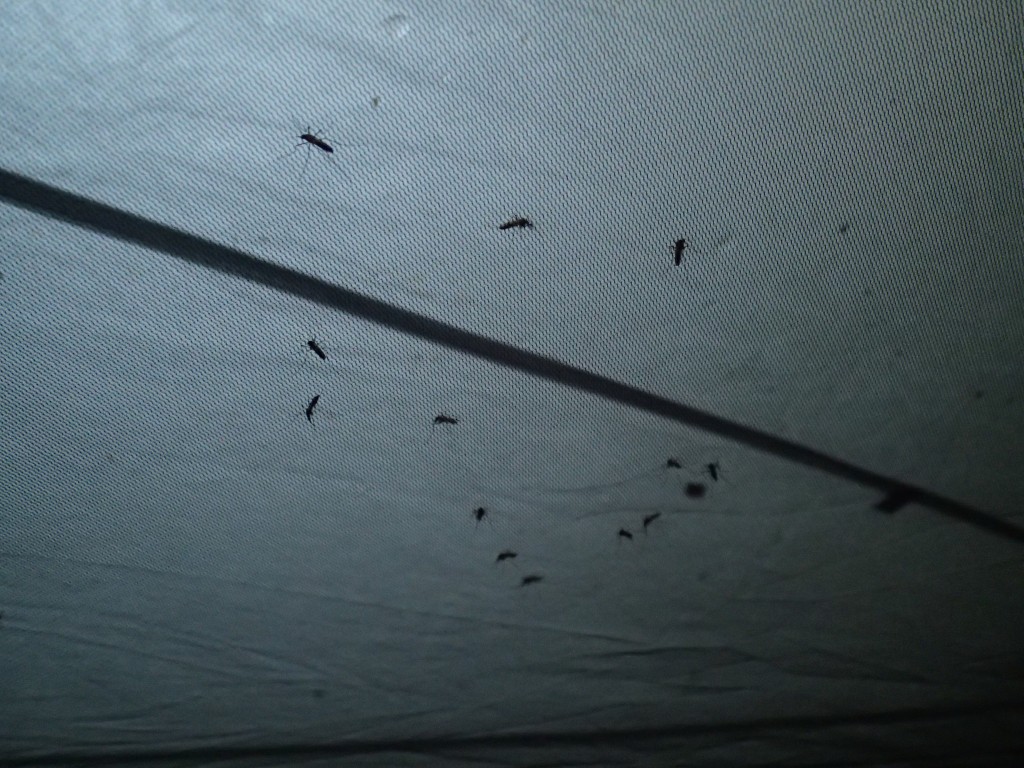 Mosquitos knocking on our tent door.

The point of this horror story is to prove that I am a qualified reviewer of bug-related gear.  I prefer some products over others but will use anything if I have no other choice.  I’m breaking down this post to a few different categories in case you’re not as crazy as I am who uses all categories simultaneously.  Desperate times call for desperate measures!

Consumable Prevention: Supposedly, your diet can effect how good/bad you smell to bugs.  Different body parts can also be more or less attractive just like with humans!

Clothing: I have my ideal combo of the jacket, sun/bug hat, and sunglasses.  Different combos of pieces might work better for you, though.  Remember, a net is useless if it touches your skin!  Mosquitos can bite through the netting and it is only meant to keep the bugs out of reach from your skin.

Sprays/Lotions: I use natural, DEET-free, repellents.  I’m against any chemical for use on your body because true side-effects aren’t always known, and it is different for everyone.  Besides, it is also a “cool” thing to use natural/organic products these days…  I think high concentrated DEET products work well for general area sprays but not for your skin unless you want to melt it off (I’ve had DEET products ruin clothing.).  You also could be breathing in the chemical so I prefer direct to skin natural products.  I have found that natural repellents work just as well as DEET anyway.  Plus, they actually feel good on your skin because of the ingredients.

Treatment (because you didn’t use the correct combo of prevention!): Nothing works as well or as fast as I want it to but here is what I’ve settled on.

So besides making me friends, I hope this article helps make you less likely to be bug food and keeps you itch free enough that you can sleep in relative comfort (because you’re going to be uncomfortable enough as it is on the A.T.!)  Please feel free to mention other products you’ve tried because I’m always looking for something better.  Also, do suggest some other non-bug-related gear for us to try out for our next review!

We are a hiking/ traveling/ blogging team from Milwaukee, WI. We started our A.T. thru-hike in 2013 as a belated honeymoon. Alex succeeded (because he is a crazy ultra-runner) but Nicole lost too much weight and has NH and ME to complete. Nicole now has old-lady knees, and Alex continues to to get better at long-distance running!