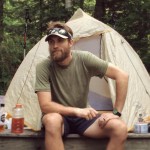 It isn’t often that I put on a pair of shoes and feel like I’m wearing a piece of cutting-edge technology. Humans have been protectively wrapping their feet in leather (and other dead animals) since we first stepped onto an overly-sharp pine cone. My go-to boot for the past few years—the Keen Targhee II Mid—has a reliable simplicity to it that, although undeniably comfortable and sturdy, feels like it is just a refined version of the same boots my ancestors wore.

When I strap on the Arc’teryx Bora² Mid GTX Hiking Boots, on the other hand, I feel as if I have stepped into a completely new phase of boot development. 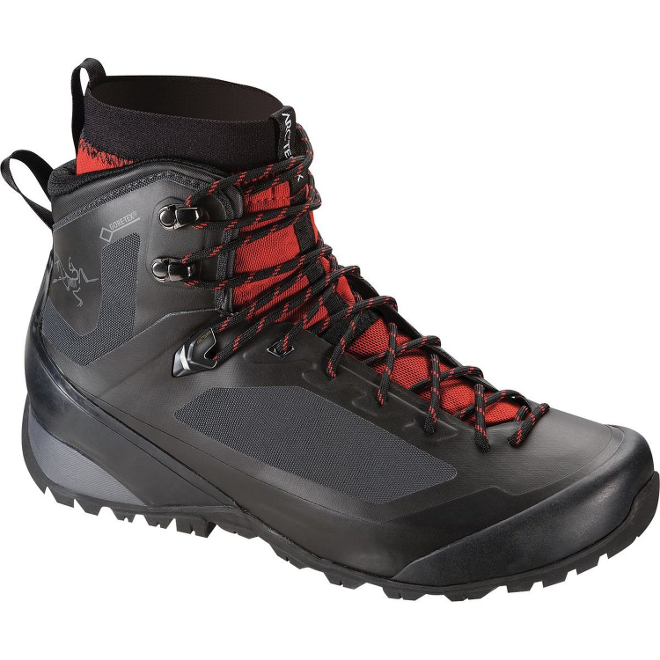 That may seem a bit hyperbolic at first, but even a brief glimpse at the Bora² shows you that it is, at the very least, nowhere near your granddaddy’s boot.

And that’s a good thing.

The Bora² Mid GTX is part of the revamped Arc’teryx footwear collection for 2015, boasting extensive redesigns that, according to Arc’teryx, represent a “radically different approach to hiking footwear.” This collection is split into two lines: the “Bora” line for technical hiking and trekking, and the “Acrux” line for alpine approach climbing. Whichever line suits your fancy, know that you are purchasing a premier product with a premier price tag—Bora² boots will run you $320, close to three times more expensive than some of the most popular hiking boots out there.

But when I say premier, I mean that you can tell where your money is going: Bora² is built to survive pretty much anything you can throw at it. This is primarily thanks to the combination of the “seamless, single piece thermolaminated upper” (read: the top of the boot), an EVA midsole for shock absorption and stability, reinforced toe and heel bumpers, and a Vibram outsole thick enough to withstand the mightiest of pine cones—as well as all of the other sharp, vicious stuff you might find underfoot in the woods. 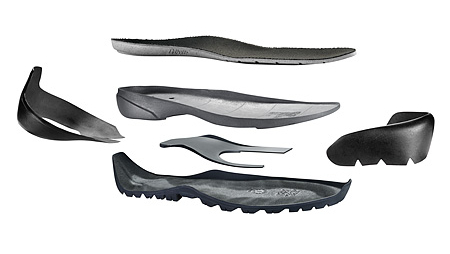 The quality construction of the Bora² ensures that this boot will last—and so will your feet. Image courtesy of Arc’teryx

This boot is incredibly tough, even down to the all-metal lace hooks. I’ve spent a few weeks with the Bora² boots and, outside of the usual buildup of mud/dust and a few scuff marks (I’m a klutz), these babies look—and feel—like they did when I first put them on. Whereas my Keens may last 2-3 years of regular use, I can see the Bora²s lasting at least twice that (as long as the Vibram outsole doesn’t lose its treads, anyway). And at 1 lb. 5.2 oz. apiece, they are relatively light for the amount of protection they provide. While trail runner enthusiasts will likely scoff at you as they blaze the trails in featherweight footwear, you can brag about having all of your toenails when you eventually catch up to them. 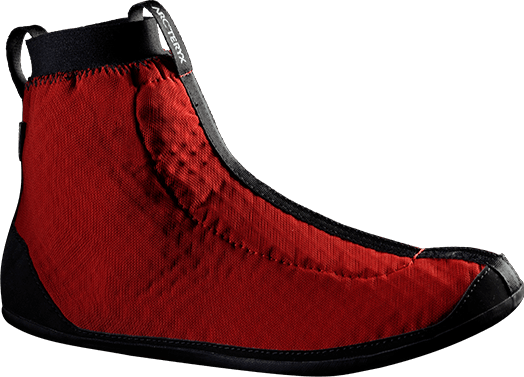 The inner “Adaptive Fit” liner of the Bora² boot is where the magic happens. Completely removable, the liner provides ample cushioning, friction reduction, and water resistance to an already-sturdy boot. Image courtesy of Arc’teryx

But the real star of the show is the interchangeable “Adaptive Fit” liner, which essentially functions as a secondary moccasin that forms to the shape of your foot over time. Completely removable and interchangeable—there are currently three varieties available from Arc’teryx—this liner is constructed with minimal seams to reduce the amount of friction points on your feet. Since it is separate from the upper, the liner also absorbs almost all of the friction caused by rubbing against the inside of the boot itself.

Typically, I have to wear sock liners on long treks to avoid hot spots and blisters. With the Bora² boots, a pair of merino wool socks was all I needed to ensure that my feet were blister free at the end of the day. While the boot itself takes a significant amount of time to break in (more on that later), I was consistently comfortable thanks to the liner’s ample cushioning and friction-absorbing properties.

The liner also has a Gore-Tex layer to keep water away from your feet, though this comes standard on most boots nowadays; what most other boots don’t have is an elastic opening that seals just above your ankle, ensuring that scree, debris, and, more importantly, water don’t sneak into your shoe between your foot and the sidewall of the boot.

Granted, debris could still slip in-between the liner and the boot, but this has not been a problem for me thus far, even on a gravel footpath.

As for water protection, I spent two days hiking in an accurately-named rainforest, and my feet were still pleasantly dry at the end of the day. Combined with a pair of short water-resistant gaiters, the chances that your feet will become soaked by a sudden downpour are slim. And if you’re worried about the elastic opening cutting into your leg, don’t: unless you have unusually thick legs, the liner should feel like putting on a second (albeit heavy-duty) sock.

(NOTE: The next boot in Arc’teryx’s lineup, the Bora Mid GTX, does have the Adaptive Fit liner, but it is not interchangeable—it is sewn into the boot. While less expensive at $270, you lose many of the benefits I’ve listed above. Buyer beware.) 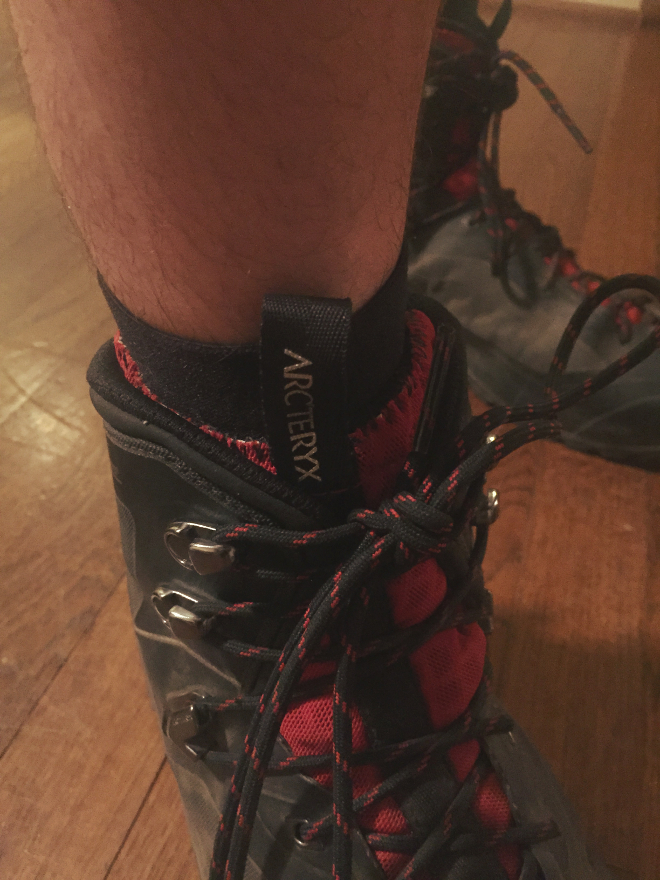 The elastic top of the liner is great at keeping out debris and light rain. On the downside, it’s also great at keeping in heat. If you plan on hiking in a hot climate, plan on changing your socks daily.

Yet while the liners may keep out the rain, that doesn’t mean that your feet won’t be wet—with sweat. The liner is built with breathability in mind, keeping my feet much cooler than with a traditional all-leather boot; but the Gore-Tex layer still sealed in plenty of heat when the temperatures soared into the 80’s. The elastic opening probably doesn’t help much in this regard, as it takes away one avenue for the heat to escape. Even so, the Bora² boots were never uncomfortably hot to me, though my socks were a bit damper than I expected at the end of the day. For long-distance hikes in hot climates, this factor may be a deal-breaker. Fortunately, should Arc’teryx figure out how to crack this problem with a new liner design, you won’t have to buy an entirely new set of boots: you can just buy the new liner instead. I like living in the future.

The Bora² is definitely built to last, but I also realized the trade-off after multiple weeks of constant wear: these things take forever to break in. This is almost certainly due to the heavy-duty construction of the upper, which remains reliably stiff to this day. That isn’t an issue most of the time, as it adds a comfortable amount of reinforcement whenever I’m going up an incline. But I noticed that, whenever the ball of my foot bent at an extreme angle, the crease created in the upper above my toes would dig into the top of my foot. This result was much more prevalent when I was first breaking in the shoes, but I still feel more pressure than I typically expect from a shoe I’ve worn for a month. 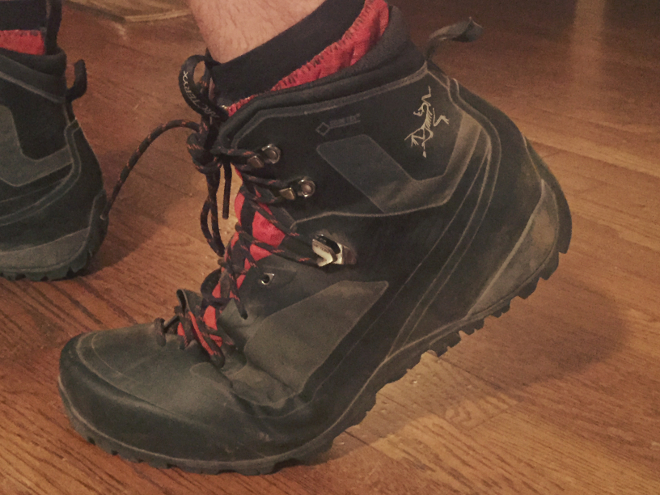 Even after breaking them in for several weeks, these boots are still very stiff. While that means that they will likely last a long time, it also means you have to put up with the “new shoes blues” for longer than you may be used to. The buckling effect above the toes (above) was probably the most pronounced side effect of the boots’ stiffness, though it has improved over time.

In the grand scheme of things, however, both of these aspects are relatively minor quibbles in light of the benefits the Bora² offers—it truly feels like the next step in boot evolution. The liner-based design offers some of the comfiest hiking I’ve experienced in quite some time, and the quality of the construction ensures that the boots—and my feet—will survive to hike for many days into the future.

And for you fashionistas out there, know this: not a day went by on the trails when I didn’t get at least one compliment about these boots. If you’re in the search for some superficial trail-tail, you have definitely found your shoe. 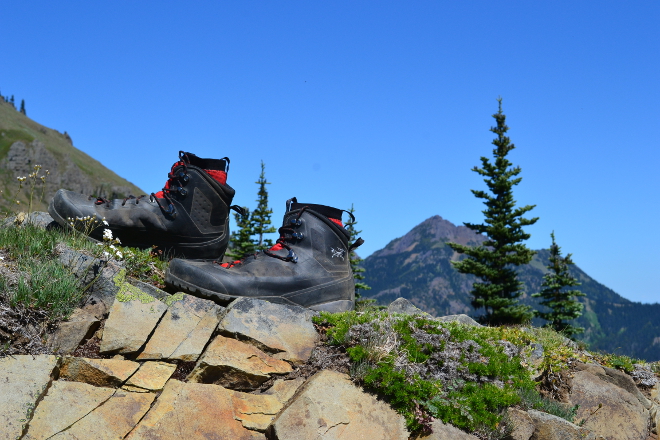