The Foothills Trail: A 77-Mile Taste of the Southern Appalachians

The idea for the Foothills Trail, a National Recreation Trail located in far western South Carolina, began in the 1960s as an effort to preserve and protect the beauty of the Appalachian Foothills. A trail corridor linking Table Rock State Park in the north/east to Oconee State Park to the south/west, was completed in 1981.

The trail features sturdy bridges crossing over numerous rivers, beautiful waterfalls, a jaunt around a corner of Lake Jocassee, and, on the eastern half of the trail, steep climbs of up to 2,000 feet that rival anything on the southern Appalachian Trail. 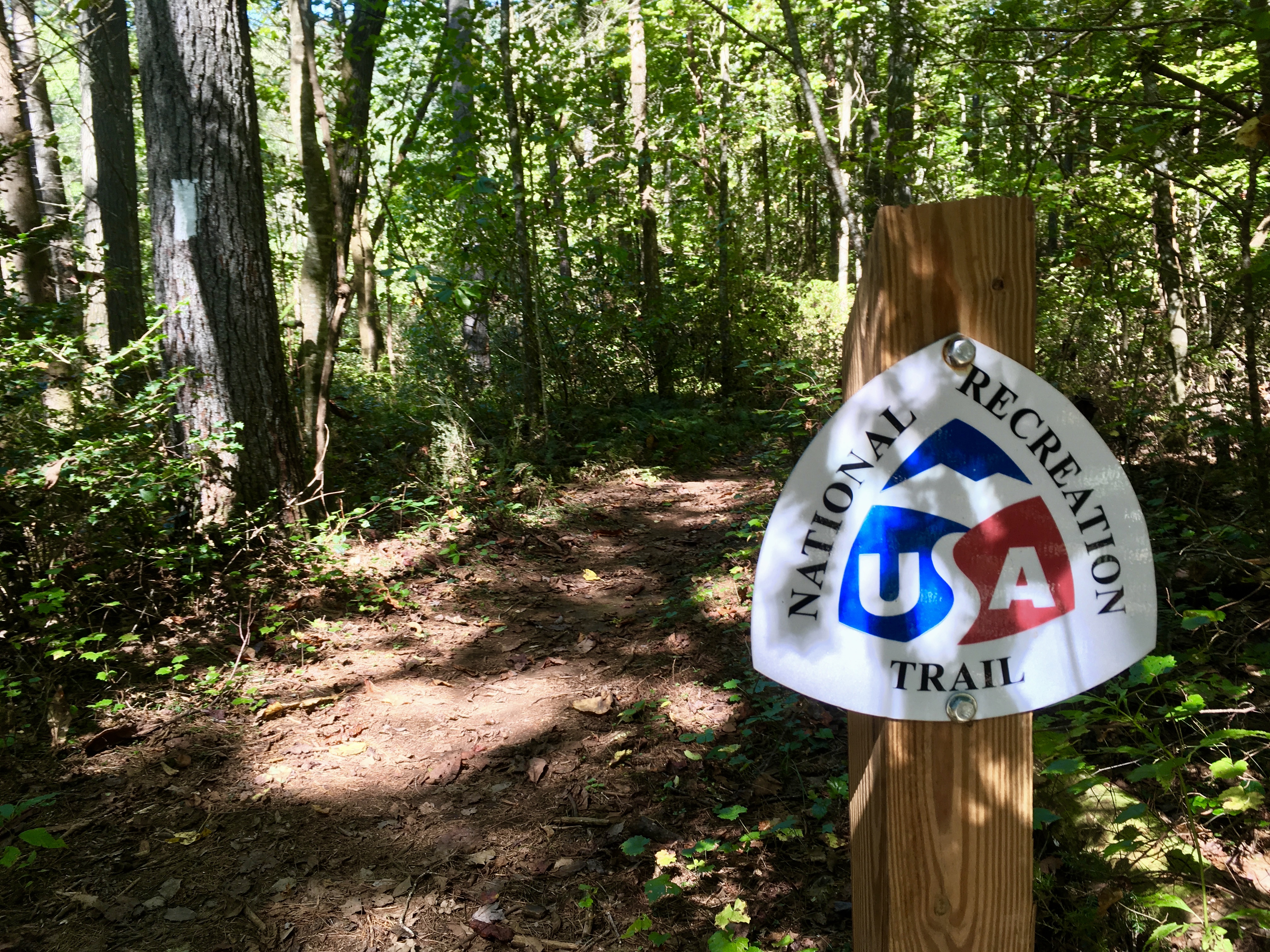 Water is plentiful, camping is allowed on all but a few miles of the trail, resupply is fairly easy, and the trail is well marked. Although mostly well-built and -maintained, as of October 2018 there were quite a few blowdowns, including a couple that force hikers into significant bushwhacking and route-finding back to the trail.

Once as high as the Rocky Mountains or Alps, some 480 million years of erosion have substantially decreased the elevation of the Appalachian Mountains (which extend, believe it or not, into Scotland). But the eastern/northern third of the trail, in particular, is as steep and rugged as the southern Appalachian Trail. 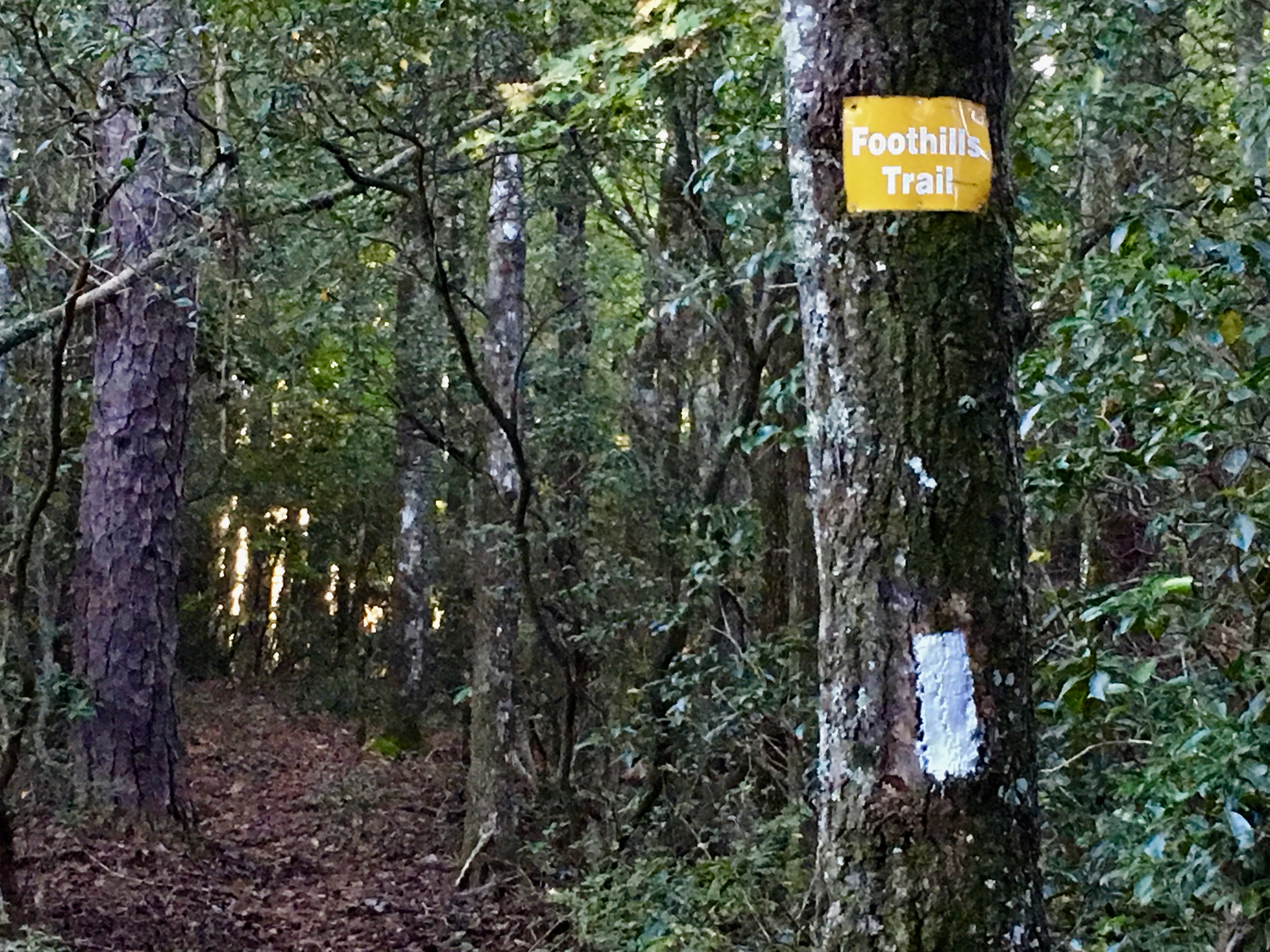 Overall, south/westbound hikers (SWOBOs?) gain approximately 10,900 feet of elevation, while north/eastbounders (NEBOs?) gain about 10,000 feet (the Foothills Trail Conservancy does not offer exact totals; approximations are based on an overall elevation profile).

The tread on most of the trail is largely free of rocks and roots, except for a few limited areas, making for pleasant hiking. Well-built bridges cross major waterways and the FTC has laid hundreds of wood-block steps into the steepest sections of trail. 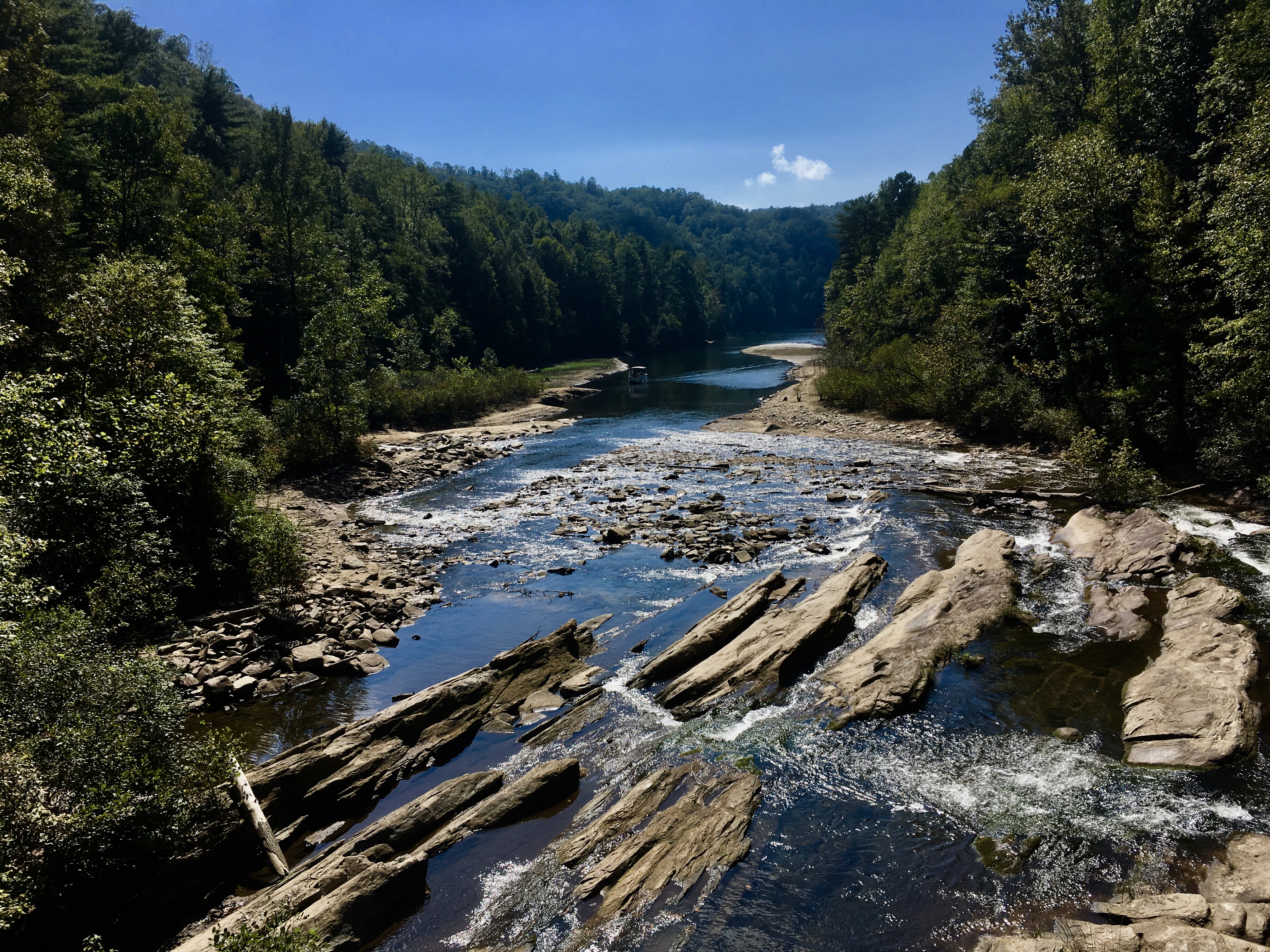 Length: 76.2 miles (the Foothills Trail Conservancy rounds this off to 77 miles).

Terrain: Easy to moderate on the western/southern part of the trail, with occasional short, steep climbs. Moderate to strenuous on the eastern/northern portion of the trail. Exposure is minimal, and many climbs feature artificial, wood-block steps.

Navigation: The trail is well-marked with white blazes and easily navigable, though as always, you can get off track if you aren’t paying attention. The Foothills Trail Conservancy store offers a complete guidebook, map, and pocket profile. Scott Lynch’s pocket guide, Hiking South Carolina’s Foothills Trail, is another popular option.

Why Hike the Foothills Trail

The Foothills Trail is a fun, challenging traipse through classic southern Appalachian terrain. The trail epitomizes the green tunnel phenomenon, but that just makes its periodic panoramic views even more rewarding. If you like water, the trail offers constant swimming opportunities, waterfalls, and flowing rivers to lull hikers to sleep.

This is a four-season trail, hikeable even in winter. There is abundant wildlife and hikers have a good chance of seeing deer, snakes, toads, frogs, raccoons, waterfowl, raptors, and more.

This is a worthy trail in its own right, but many hikers use the Foothills Trail as a kind of shakedown, warm-up, or training-wheel expedition for an AT thru-hike. The terrain, tread, and grades—from riverside meandering to lung-busting steep—all reflect the AT in its Georgia, Tennessee, and North Carolina incarnations. The climate is mild due to lower elevations, which usually means oppressive heat and humidity in late spring, summer, and early fall—good training for the AT’s mid-Atlantic in July.

While there are often more people around features such as Whitewater Falls and Lake Jocassee, hikers will find plenty of solitude on most of the trail, including quiet, secluded campsites.

There are also ten other easy access points between the two termini for non-thru-hikers.

Which Direction Should You Hike? 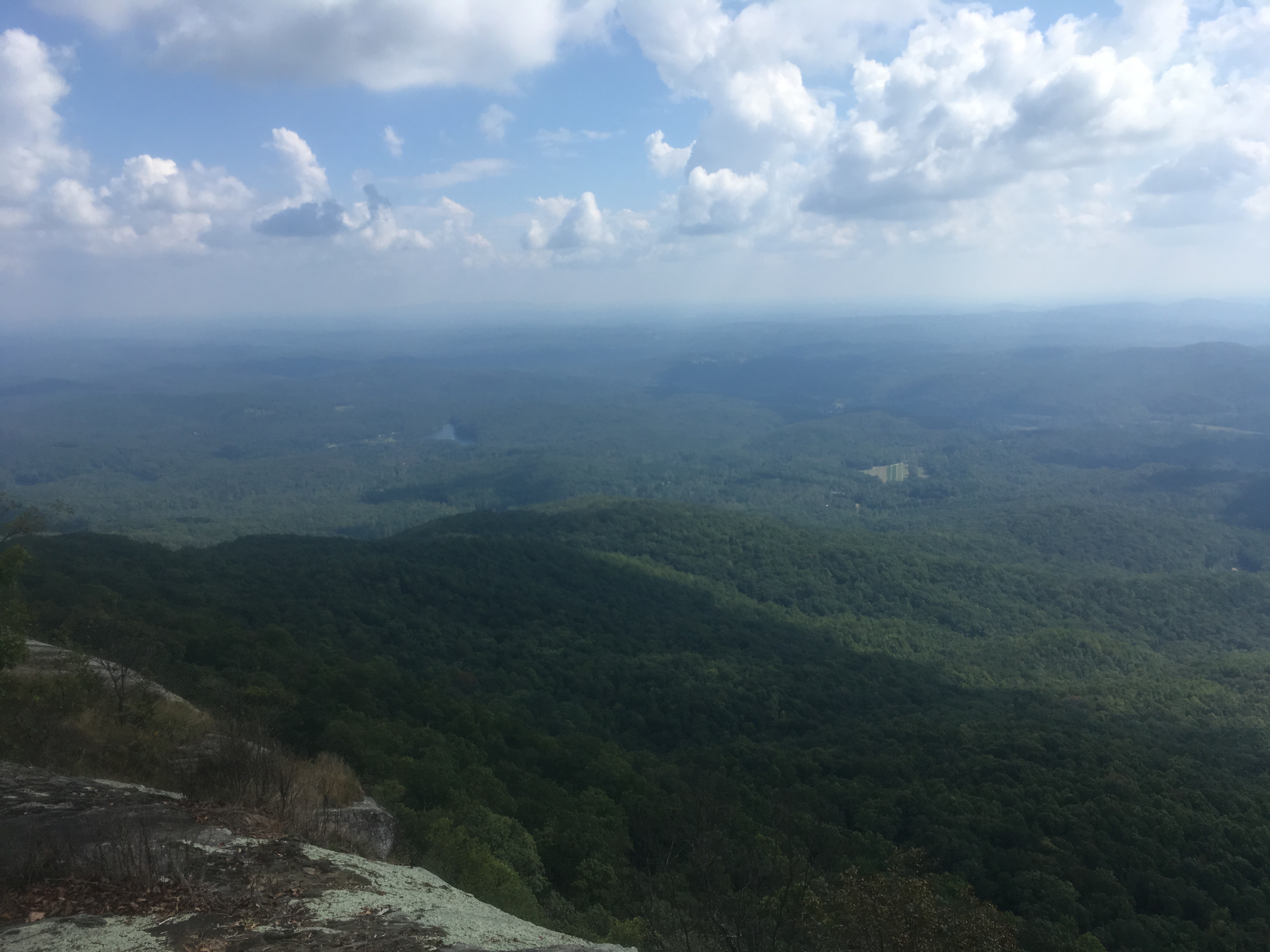 A view from the flanks of Pinnacle Mountain in Table Rock State Park, along the Foothills Trail. Photo: Clay Bonnyman Evans photo

Thru-hikers travel both north/eastbound and south/westbound, but there’s no question that those who travel south/westbound have it a bit tougher. As on the AT, south/westbound Foothills Trail hikers walk straight into a buzzsaw, tackling the highest, most challenging terrain immediately and gaining some 3,000 feet in the first 9.8 miles to the summit of Sassafrass Mountain … on day one.

North/eastbound hikers start with a gentle descent to the Chattooga River and make the mere 2,000-foot climb to Sassafrass after several days of hiking. The western half of the trail covers significantly less grueling terrain overall. 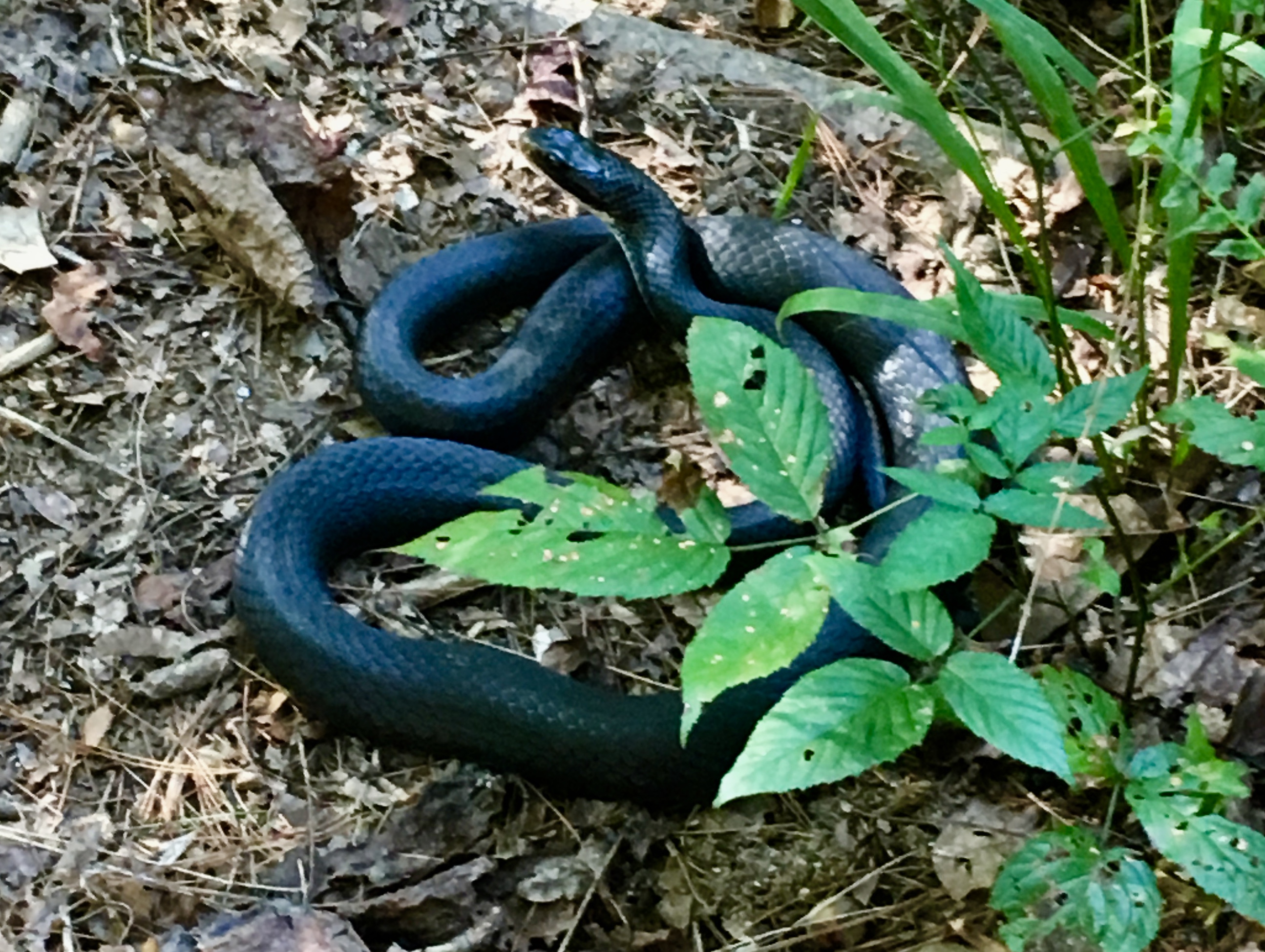 It’s entirely plausible to hike the Foothills Trail in any season, though late-spring to early summer and fall are most popular.

Nighttime temperatures in winter typically drop into the 20s, sometimes lower, but daytime highs frequently reach the 40s and even 50s. In summer and early fall, the heat and humidity can be a killer—hikers who can tolerate walking in gear literally soaked with sweat will avail themselves of frequent opportunities to swim and wash off chafe-inducing salt and grime.

Insects can be troublesome, especially mosquitoes and biting flies in warmer months. And many a Foothills Trail hiker has found herself sprinting away from the occasional swarm of irritable hornets, especially in fall. The incidence of Lyme disease is very low in South and North Carolina (less than .5 confirmed cases per 100,000 residents), but the black-legged (or deer tick) is present, so be diligent about tick checks.

Gear for Hiking the Foothills Trail 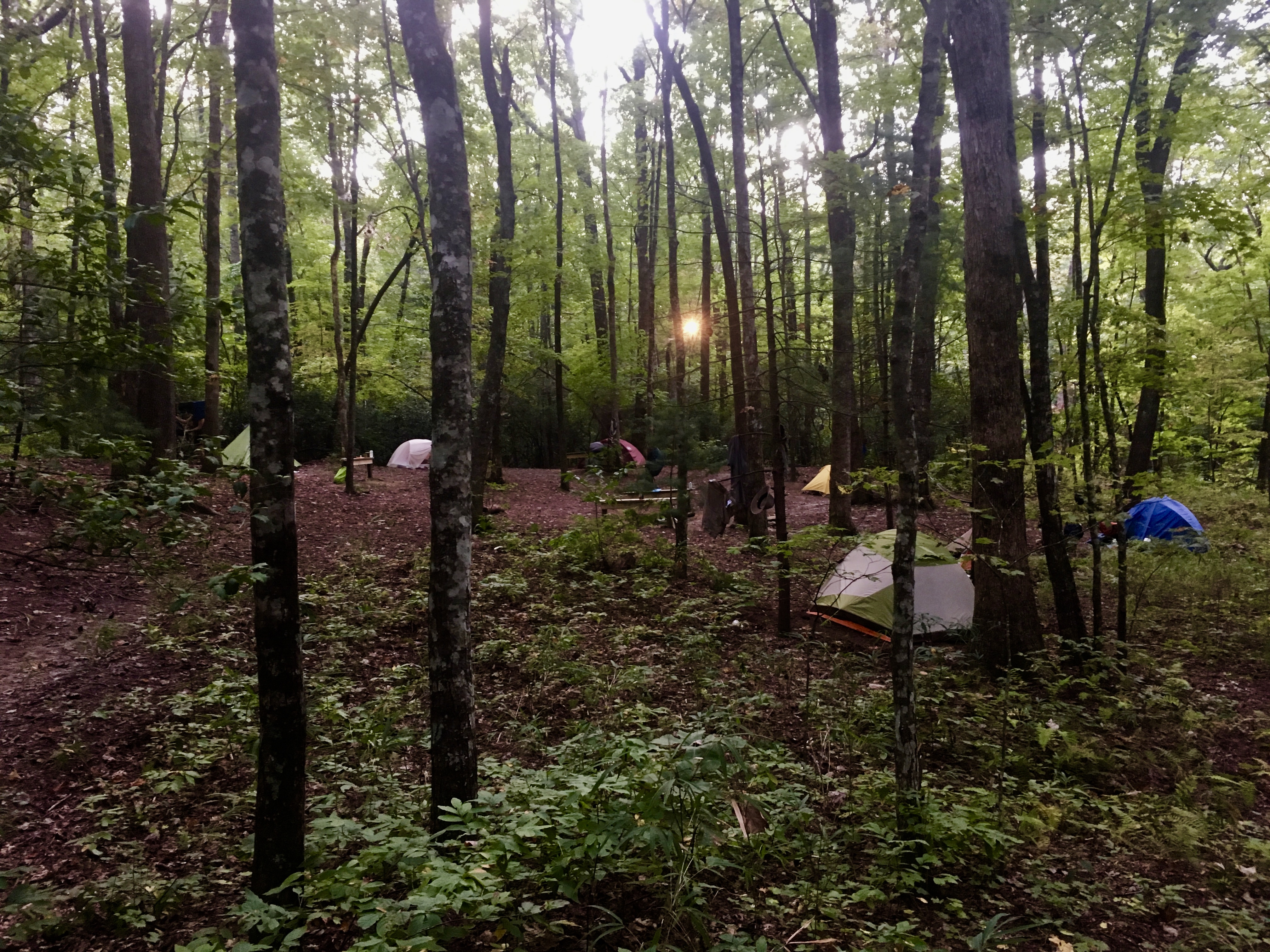 Campsites are plentiful all along the trail, with just a few restricted areas. Photo: Clay Bonnyman Evans

With the exception of the winter months, chances are that weather will be warm and often extremely hot and humid. Most of the year, hikers can leave cold-weather gear at home.

There are no shelters along the trail, and rain is frequent, so hikers should have a good shelter such as a tent, tarp, or hammock.

The Foothills Trail, though steep in places, is not especially rugged, so trail runners are more than adequate.

Bears frequent these mountain areas, so it’s important to bring and adequately hang a bear bag, or use an Ursack setup. A bear canister is probably overkill. Don’t forget the insect repellent… you’ll want it.

Camping is allowed on most of the trail’s 77 miles, with the following exceptions: 1.7 miles along the Whitewater River on Duke Energy property, starting at around mile 30 (northbound); Table Rock State Park, except in designated campsites at park headquarters. No permits are required, but if you camp in either Oconee or Table Rock state parks, there is a fee.

The standard guidebooks for the Foothills Trail provide detailed information about plentiful camping spots, and there are numerous spots to camp along the way that aren’t listed in either book.

Along the sandy banks of the Chattooga River and just above Laurel Fork Falls are two of many excellent camping spots on the trail. 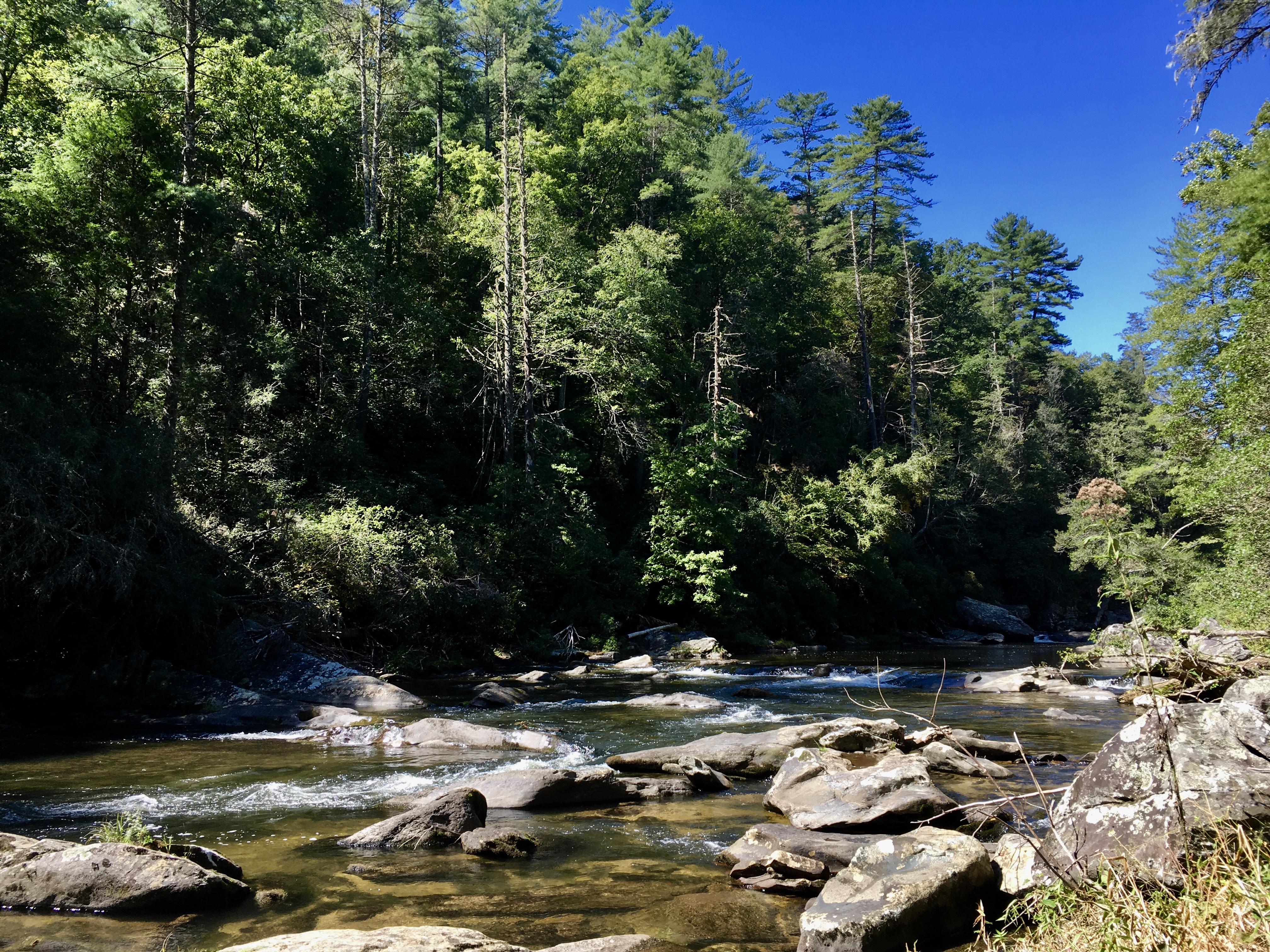 Camping on a sandbar along the Chattooga River is a backpacker favorite. Photo: Clay Bonnyman Evans.

Chattooga River Valley (miles 10.6-15.5): Many excellent places to swim and camp along the river, which was one of the locations for the movie Deliverance (but don’t worry; there don’t appear to be any crazed hillbillies in the area).

Whitewater Falls (miles 30-31.7): Six different falls that tumble a total of 800 feet, making it the highest waterfall east of the Mississippi River.

Lake Jocassee (mile 48.5): The rocks beneath the bridge over the Toxaway River make an excellent spot for lunch, rest, or drying out your gear.

Laurel Fork Falls (mile 54.3): A scenic cascade with several streamside campsites just one-tenth of a mile to the east.

Sassafrass Mountain (mile 66.4): At 3,553 feet, the highest point in South Carolina, with 360-degree views from the fire tower on top (note: the tower was closed for construction in late 2018). 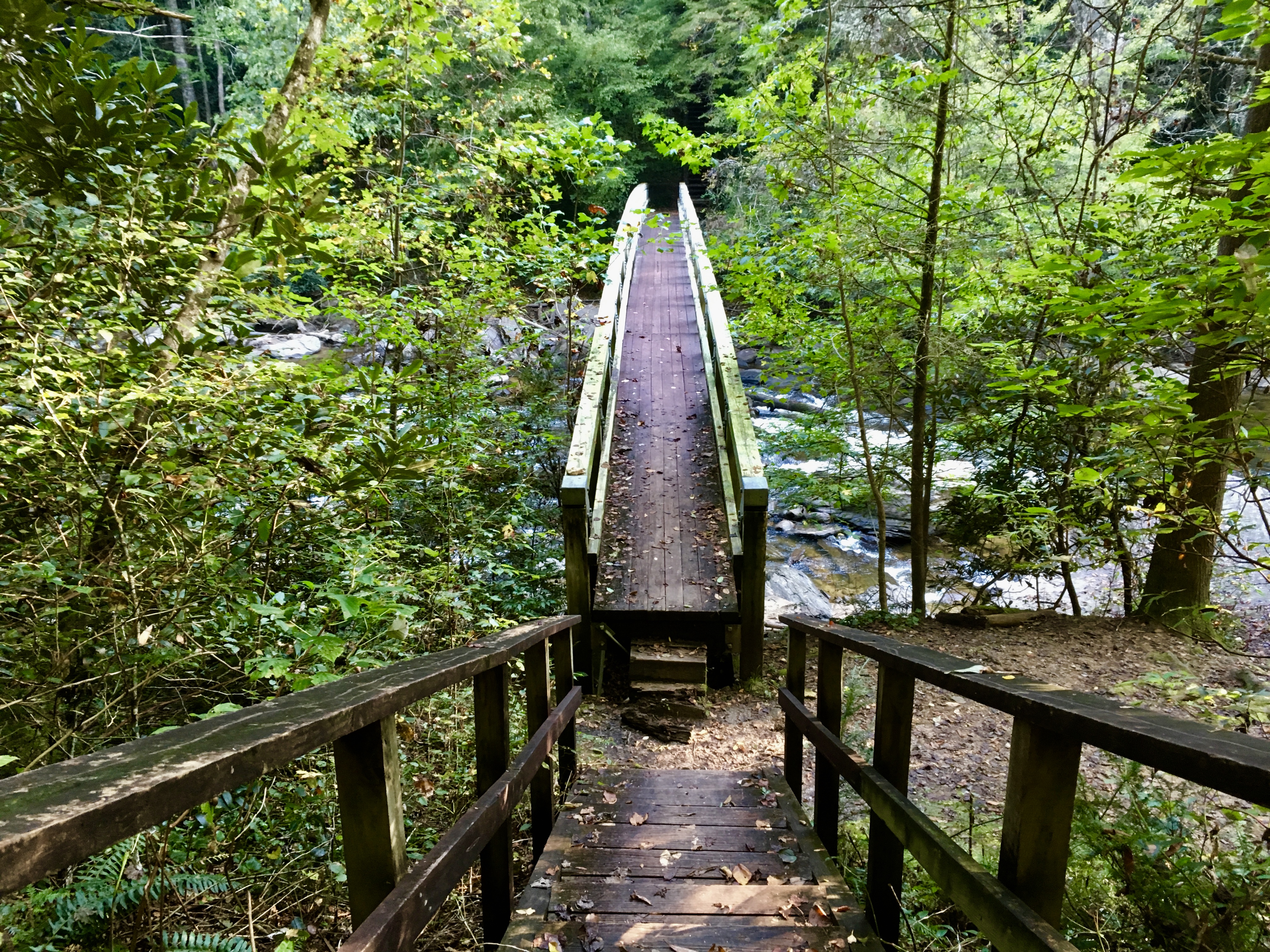 A footbridge across the Horsepasture River on the Foothills Trail. Photo: Clay Bonnyman Evans

In a normal season, there is plentiful water all along the trail. Hikers should fill up before ascending Sassafrass Mountain, particularly northbound; the climb is long and steep, and there are no water sources for 4.5 miles.

There are numerous road crossings, and hitching into small towns such as Salem, SC, or Sapphire, NC, isn’t too difficult. Some shuttle drivers also will do food drops for a fee.

It’s unfair to reduce the Foothills Trail to a warm-up for the Appalachian Trail. That said, it’s hard to think of a better trail to help newbies figure out if they are going to enjoy the AT.

The southern/western portion of the trail is fairly gentle, but don’t let that fool you. Especially in warm weather, the slog out of  Laurel Valley, up Sassafrass, over Pinnacle Mountain, and down, down into Table Rock will tax many a hiker’s glutes and quads. Oh, and there’s the little matter of more than 500 steep steps up Heartbreak Ridge as you leave Lake Jocassee.

Hikers spend a good deal of time in the green tunnel—just like the AT—but ample opportunities to swim, gorgeous waterfalls, and occasional vistas to the south make this a truly enjoyable trail. There are plenty of non-thru options, as well, including the so-called “crown jewel” route, southbound from Laurel Valley to just below Whitewater Falls.

Check out more trails in the Asheville area here. 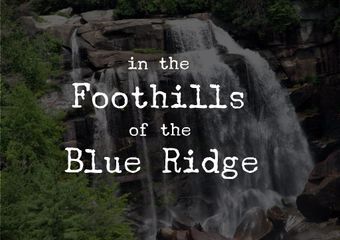 Exploring the Carolinas' Foothills TrailThe Blue Ridge Mountains are well known for their three hundred sixty degree views from their bare summits. But while the Blue Ridge Mountain Balds may be a highlight of the southern Appalachians, they encompass a far greater range of…Read More 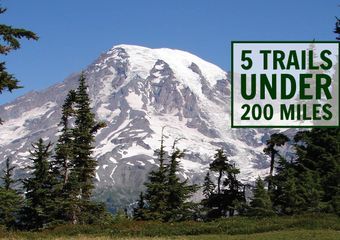 A Thru-Hike for Everyone: 5 Trails Under 200 MilesRecent books and movies have inspired countless hikers and potential hikers to dream about thru-hiking one of the “big three” of America’s long trails: The Appalachian Trail, Pacific Crest Trail, or the Continental Divide Trail. However, for many people the…Read More
< Previous Post
Next Post >