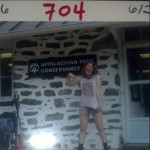 Hike Your Own Hike: Recognizing when being selfish is actually a good thing

Most hikers who join the ranks of the Appalachian Trail, will probably hear the term HYOH within their first week. “Hike Your Own Hike”, sounds like simple enough advice, but the act of putting yourself first can be a struggle. Some hikers might be able to start off with an independent mind-set, but for me, learning to put my needs first has always been difficult. The moment when I learned what HYOH really meant to me, it marked a significant turning point both physically and mentally.

When I began the Trail, I had the typical fears of any fresh-faced hiker, but one tended to float above the others; the irrational fear that I wouldn’t make any friends. I looked to my hike as a second college experience. I had already graduated three years earlier, but when I began on Springer Mountain I felt like I was right back in Freshman year. In many ways it is was like the first year of school. I was alone, far from home, and desperate to cling on to any living thing and form a connection with it. I think that everyone feels that way, but I felt at a disadvantage because I was a girl and needed to prove myself more. What if the boys were mean to me?

I of course learned that all you really need to do to make friends on the Trail is to simply have a pulse and a pack. I quickly got to know the hikers in my pace group, and loved them like family after a few short days. We would plan our days together each morning, made sure that we ended in the same shelters at the end of the day, stayed in towns together, and left towns together. I couldn’t imagine my hike without any of them. 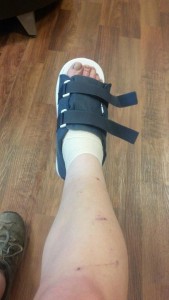 Everything changed soon after I decided it would be a smart idea to carry every item I received in an extra-large resupply shipment. I didn’t want to waste my money on a bounce box, or throw away any of my precious food-stuffs in a hiker box, so I humped an extra 10 pounds over 20 miles. The morning after, I put my foot on the ground and I knew something wasn’t right. I tried walking a few more miles, but after catching up with members of my hiking group at some trail magic, they decided it would be better if I got an emergency ride into town. Logic, told me that if I kept walking on a bad foot, I would hurt myself more and potentially end my hike altogether. The hard-core hiker side of me didn’t want to go there. I could just take some vitamin-I and it would be fine, right?

You might not even be injured like I was, but the rule still stands with a lot of situations. If your physical health is in danger for any reason, listen to your body, not your brain. Your brain will try and fight you, but your body will win in the end if you resist.

It was lucky for me that the nearest town was the Trail famous Damascus, Virginia. I easily secured an emergency ride, a trip to the hospital, and a stay at the local hostel Dave’s Place. The doctor even told me that I wasn’t seriously injured. However, I was given a temporary boot, and instructions to give my foot a rest for at least three days.

Eventually, the rest of my crew rolled in, hyped up and excited because they took part in the epic Damascathon (hiking 26 miles to get in to town). They were happy to see me, and of course happy to know that I was okay, but they then proceeded to tell me about the exciting hike that I had missed out on. I had already lost them. Yes, they stayed in town the next day, and took an unexpected zero after that due to weather, but the time came for them to move on. 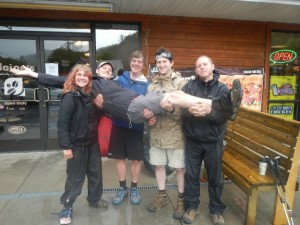 A goodbye family portrait in Damascus

Again, logically, I knew that they were going to have to leave. That’s what hikers do, they walk. But the other part of me had hoped that they would stay behind and wait. We had hiked for a solid month together, and seeing them walk away was more painful than my boot-trapped foot. And I was alone again.

HYOH Rule #2: Don’t be afraid of being alone

Even though my trail family had left, and I felt abandoned, I had forgotten that I was in one of the major trail hubs of the Trail and new hikers were coming into town each day. In a way this was also frustrating, because I would try and form new friendships only to find that they were only passing through, or leaving the next day. I’ll be honest, I did some serious wallowing in self-pity. I shut myself in the hostel one night because I couldn’t face the revelry of the healthy, uninjured hikers who would inevitably leave me just like the others.

Finally, the day came when I deemed myself healthy enough to return to the trail. I was excited to get back to my old hiking routine, but I was terrified because this was the first time I would be flying solo. It didn’t take me long to discover though that hiking on my own was an invigorating experience. Sure, I had hiked by myself before with my old trail group; walked at my own pace, and stopped for breaks when I felt I needed some food, but the group was always at the forefront of my mind. I was usually never the one to decide an end-point for the day, and often pushed myself to meet them at a particular lunch spot or shelter. There had been many days where we reached the agreed end point, and then we kept going if majority ruled. Don’t get me wrong, I’m glad they were able to push me because I always felt accomplished when I put in extra miles. But there were days where I wished I hadn’t. (See rule #1).

By cutting ties with everyone that I had hiked with, I now got to set my own schedule. I could get up when I wanted to, I could eat lunch when and where I wanted to, I could decide to end my day anywhere and I could pitch my tent in the best spot. I spent three blissful days, getting to re-know myself. Singing and talking out loud all the while.

“Where shall we go today Sriracha?”

“You are too kind Sriracha! Do you fancy a Honey Bun or a Cliff Bar for a snack?”

“Why not both! There is no one here to judge you on your snack decisions. Throw it in on some bread with peanut butter for good measure.”

And then I got sad again. All too quickly.

HYOH Rule #3: You are never truly alone on the AT

Because of my slowed pace, I had managed to hike without seeing hide nor hair of another hiker. It rarely happens, but I was avoiding shelters because I was feeling so utterly content with my new found independence. While I loved my surge of self-confidence, my social side was aching for Hiker-Trash again. Enter logical mind-set. Wasn’t I just in a town literally crawling with thru-hikers?

I pushed myself through the wet, rainy, uphill stretch towards the shelter, praying to the AT Gods that someone would be there to greet me. I spent the last hour wondering if I was hiking on the trail or the water source. My feet were soaked, my spirits were low, and my motivation was quickly draining. But miracle of miracles! There! The shelter! Like dream follows nightmare, I was whisked out of the rain and into a dry haven surrounded by people. The place was packed with other smelly, wet hikers and I couldn’t have been happier. I didn’t know all of them, but I didn’t care. I had forgotten that all you need to do to make new friends on the trail is to have a pulse and a pack.

And dammit, I still had both. 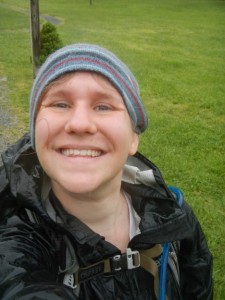 One of the selfies I took while hiking alone

In the end, I learned that I was able to make it on my own just fine. I reached a new plateau in the stretch of time between my injury and my solo-hike, because it not only allowed me to heal physically, but mentally as well. It wasn’t like I learned to hate people. In fact, I learned to appreciate people even more. But I didn’t have to rely on them all of the time. I found the balance that I had been missing in the beginning. Yes, I once again hiked in a group, but the second time around, I knew that if for some reason we got separated, I would be able to do what’s best for me, and hike my own hike.

You too can HYOH, if you keep these basic rules in mind. They might vary a little bit for you, because, hey, it’s YOUR hike. That’s the point. But the most important thing to remember is you do what is best for yourself. Selfish can be smart. Everything has a way of falling into place, but it’s nice when things happen on your own terms.

(For those of you who are curious, I was able to reconnect with a majority of my original Trail Family. Through the wonder of technology we kept in touch as best we were able. Trail registers are also a handy tool in the AT world. Some I was even able to catch up with and see again. Long story short, I found a wonderful new family that I essentially stuck with for the remainder of my journey, but a hiker never forgets. This post is dedicated to the hiking class of March 26, 2013. You will always be family.)

My name is Sriracha (Sir- ah-cha!), and I took the crazy long walk known as the Appalachian Trail in 2013. Since my successful thru-hike, I've been passionate about sharing as much as I can about my experiences. These gems can sometimes elicit eye-rolls from those who are close to me and are tired of hearing about it. I'm excited to finally be able to reach an audience who genuinely cares as much about hiking as I do!