Hikers are trashy folk, and the Hiker Trash submissions keep rolling in. Here’s Volume III of the trashiest of the trash, including leftover food, day hikers seeing more than they wanted to, and some used underwear.

Have a story to share? This is an ongoing series and we are always looking for your trashiest trail moments. If you have a photo to include, note that on your entry and we’ll get in touch.

Full Moon Over the AT

I was on my second day in the Smokies, taking a snack break when I really had to pee. So I left my pack with a friend and walked off into the woods to do my thing. I’m mid-pee, behind a giant rhododendron bush, admiring the beautiful view when I lock eyes with some poor day hiker and her dad. Turns out my chosen spot was just far enough from a side trail to a shelter that I couldn’t tell it was there. 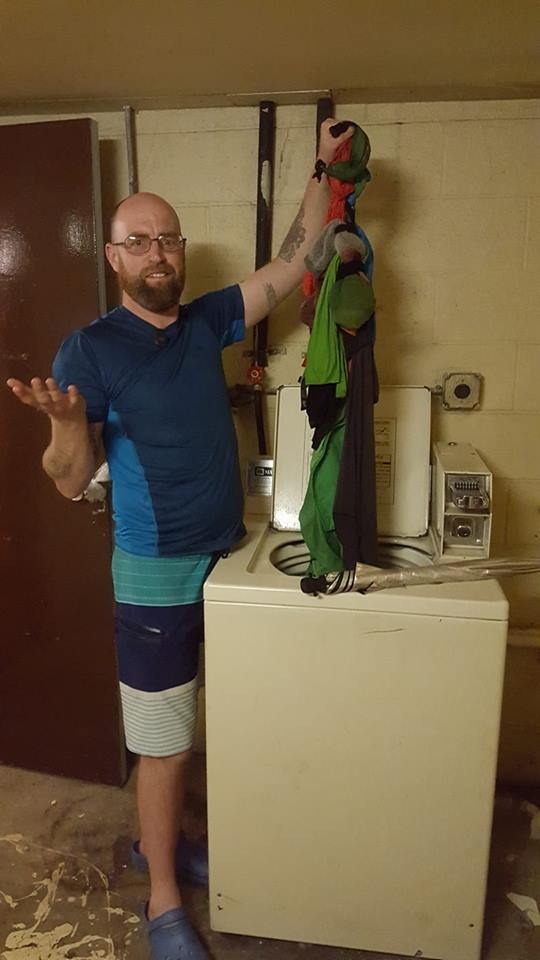 Trail Name: Murph
2016 AT NOBO
During my first time stopping in town for food, I ate way too much and threw up in the car into my cupped hands. I had to hold it until the driver could pull over. Vomit got in my hair, in the seat, on the floor, everywhere.

Anonymous
AT 2013 NOBO
We were at the Smoky Mountain Diner in Hot Springs.  While waiting for our food, the table next to us signed their checks and departed.  One of the patrons from this table had apparently brought their C-game to this particular meal, because they had left behind a half-eaten plate of pancakes.  At that particular moment, hunger outweighed shame, so I grabbed said plate and stuffed my face full of flapjacks.

Stonewall
PCT NOBO
Timberline Lodge was an all you can eat breakfast buffet in northern Oregon that I had heard about before the trail and was thinking about since Campo (southern terminus). Well, when I made it I proceeded to gorge myself on pancakes, scrambled eggs, and the like. I ate so much that my stomach started to physically pain me so I went into the bathroom. I felt that if I threw up I would feel a lot better. So I did. A few fingers down the throat later and some syrup-y smelling toilet matter down the drain, I come out feeling like a million bucks and I proceed to have two more plates. 10/10 would recommend. 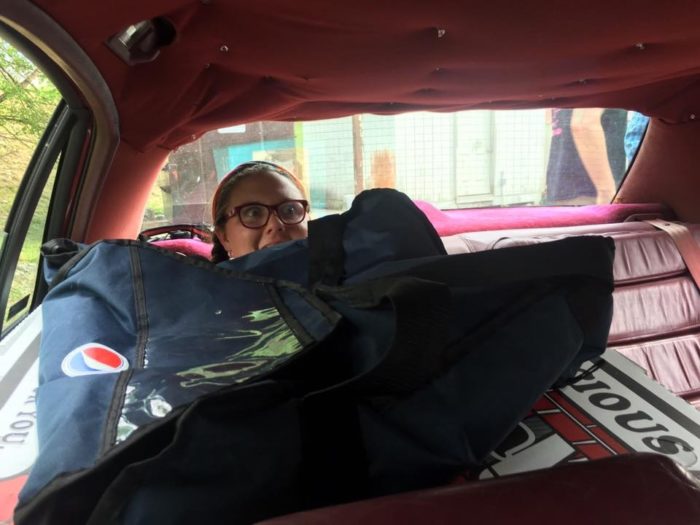 Kira Thornley getting delivered to the trail with a pizza, in the pizza delivery car.

Anonymous
PCT 2016 NOBO
I went into a hotel, got the pin number for the sauna/hot tub room from a guest (who was also a hiker), and snuck into the sauna room. Which had a shower. But no soap or towels, but there was also a bathroom, with hand soap. And the sauna. So I turned the sauna up high, used the hand soap to take a shower with all my clothes on. Then   stripped, washed again, and dried my clothes and myself in the sauna. Yay free showers!

Adam Arico/ Whitney Shoeston
PCT 2013, 2016
When I finished up the trail I ended up in Seattle with about $5 to my name after I purchased my train ride home. I was stuck in the middle of downtown with no place to sleep. Having everything I needed to survive in the wild in my backpack but I had nothing I needed to spend a night in the urban jungle. I ended up going to a Denny’s in downtown because it was the only place I could walk to that was open for 24 hours. I spent the whole night drinking Coffee and staying awake so i wouldn’t have to sleep on the street like the many homeless people in downtown. 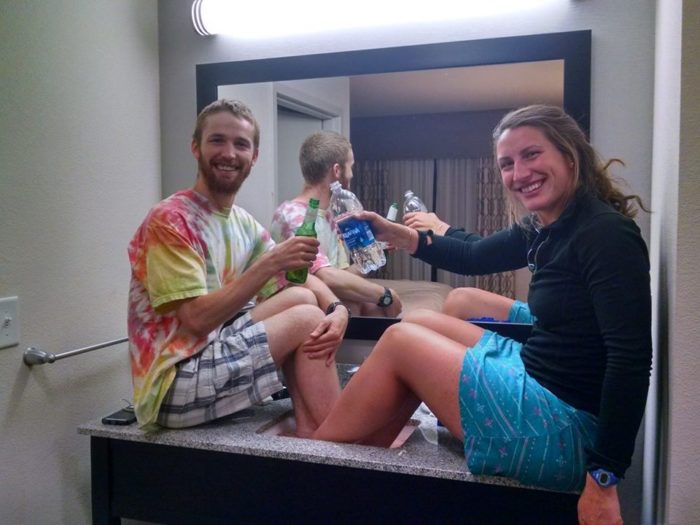 Mr Ducks
AT SOBO 2016
Myself and two other hikers spent the night in a one person bathroom to brave a hurricane in the Shenandoah National Park. We even brought a few of the wayside tall boys in with us, it didn’t make the experience any more pleasant. The worst part, aside from the smell, was the automatic lights and fan. Every time one of turned over both the lights and fan turned on for 10 minutes, thus waking all of us up.

Woodchuck
AT 2016 SOBO
We were at the Fontana Dam Hilton and in the middle of the night, it started pouring rain. I looked at the weather for the next day and you know that feeling when it’s just 100% rain and you keep scrolling to the right but it never ends? Well, it was just that feeling, except much worse, as I accidentally left my jacket hanging to dry at the last shelter when it rained. I was hoping to get a new one in town but when it rains, it pours. Luckily, when I left for camp, it was a mere drizzle. About 10 minutes into hiking, we crossed a parking area that had… a vending machine and restrooms. I weighed my options – garbage bag from inside the bathroom or the one outside. I chose the empty one inside the women’s room, but it was too small. Picture a clear soccer pinnie, a crop top if you will, knotted down at the bottom the way I used to purposely do as the promiscuous little kid I was. It didn’t work. My other option? The large black garbage bag outside of the restrooms. There were some old cans in there that we transferred into the smaller garbage. White Gurl and Fraug bought some sodas and watched me as I poked holes for my head and arms. The worst part? Definitely the smell. That smell that you smell and you think ‘how does ALL garbage smell the same – like a garbage truck?’. That smell. It came in waves all day. The best part? Well, it sure as hell beat severe hypothermia. So yeah, that was my most hiker trash moment… literally. 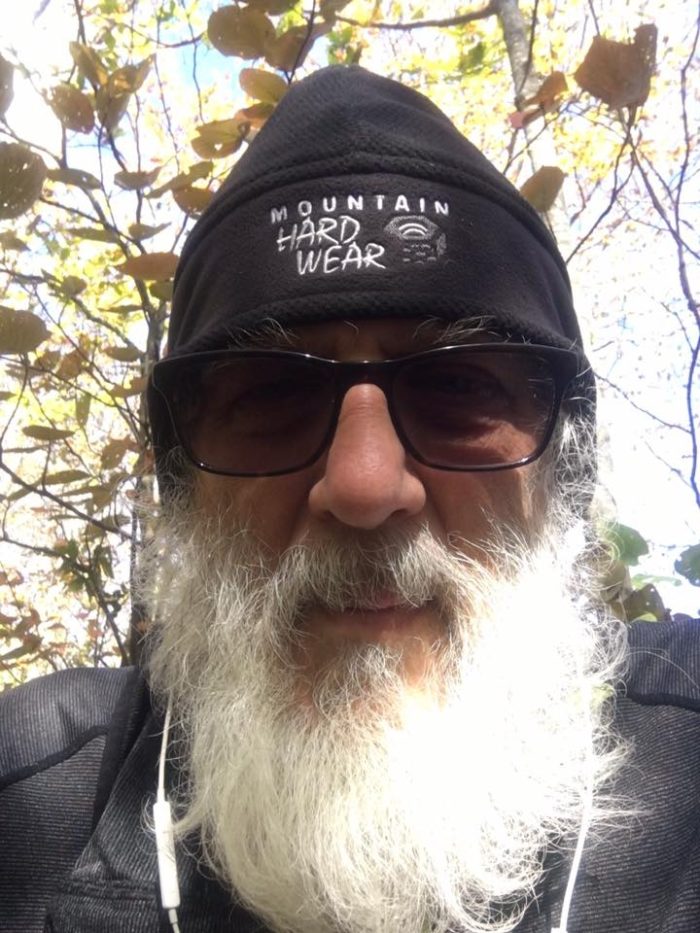 We found ZZ Top. George Turner scares away day hikers like a boss.

I followed the traditional rules of one pair of clothes without a spare (that includes underwear), eating food items of all variety that had fallen into the dirt (yes even Knorr noodles) and the traditional loitering around the hiker hot spots. I even had some epic moments which include dumpster diving for cases of beer. However, without a doubt the trashiest thing I did this summer was after spending a three-day zero at a pink blaze’s place. As previously mentioned I only had one change of clothes. Now wouldn’t it be unfortunate to say leave your only pair of boxers in your pink blazes washing machine? Whoops. I wasn’t a stranger to going commando – being half hippy and all… And I had promptly left her place without them thinking they were in my pack. I free balled it for a while, and it was glorious. That is until a day when I started to chafe. Day one – uncomfortable but I survived. Day two – like someone was using the wrong end of Velcro on a second degree sunburn. I was still two days out of town and was trying to walk as spread eagle as possible. Every creek I came too was used to try and suppress the pain with cold water. Of course I didn’t have any cream or powder, I previously gave it away to another hiker (we call that black magic). I knew that if I could just make it to town I could zero, buy some Exofficio and be on my way. It was on the bank of an especially beautiful and cold river that I accomplished my dirtiest hiker trash feat. Laying there on the bank was a pair of Exofficios. As the saying goes, the trail provided. I tried to convince myself that it was too dirty (in general no brown blazes on the pair) and that it could have been anyone’s and I mean anyone’s, But they were my size and I was desperate. I washed them, and then washed them again and one more time using my camp soap (only time using this, whoops) and put them on. It gave me the perfect separation between my freehanging parts and my shorts. Once in town I seriously debated keeping them too, I had already crossed that line – but my amazing pink blaze drove back to the trail, pair in hand, and well, who needs to carry an extra pair anyway?