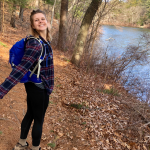 When we were doing our research about the Pemi Loop we knew that it was named the second-hardest day hike in the US, but we didn’t know that it was going to be the most difficult thing either of us have ever done. We thought, “Well, we aren’t doing it in a day, we’re doing in three days so it SHOULD be fine!!” LOL NOT.  Literally we both cried multiple times. I went into this with a knee injury and Connor rolled his ankles multiple times. Injuries aside, this was no friggin joke. OK, so here’s what happened.

Bright eyed and bushy tailed we put on our packs, pay the parking fee at the Lincoln Woods parking lot, which was only $10 for the three days we were expected to be out there. We crossed the famous Pemi River bridge knowing that the sight of this bridge three days later was going to bring us a whole different bag of emotions.  At this point we were excited and definitely nervous. We had an older gentleman about 100 yards in front of us and we kept saying, “Damn, this guy knows what he’s doing.” The trail was flat and was an old railroad track for about 1.5 miles. Then the climb started. The trail was nice to us at first and was an incline that you felt more in your breathing pattern than your actual muscles. That didn’t last long until we then started the good ol’ New Hampshire boulder climbing and the famous AMC stairs going up the Osseo Trail to the summit of Mount Flume. This was when we had our first sight of snow, which wasn’t much but was very surprising to us seeing as it was June 1 and 60 degrees at the bottom of the  mountain. We had our lunch at the summit of Mount Flume with the “guy that knows what he’s doing.”

We pushed on to Mount Lincoln, which we took a couple photos of, then kept on trekking. At this point we realized that we should probably start looking for some water. At this point we were literally the two most stupid people on the mountain that day and didn’t stop at Liberty Springs tent site to refill water. We thought, “Oh, there will be more,” and that my friends was where we got ourselves into some trouble.The climb continued to the Franconia Ridge where we needed to ask a couple for water who had just done the Pemi Loop counterclockwise. They were amazing, so nice and completely understood our mistake of passing by Liberty Springs.  Then we started to meet up with this man and his daughter who had been hiking the Appalachian Trail. They were very experienced and we were behind us for a good part of the afternoon. We were very tired and didn’t realize how much distance and elevation gain we had left, and this was around 2 p.m.  The father daughter pair had Guthook on their phone, which we mistakenly didn’t have, and they were able to give us a good synopsis of what we had ahead of us until we could finally set up camp. AKA, we knew we were in deep shit.

My knee was SCREAMING and Connor rolled his ankle coming onto the Garfield Ridge. See, I had trekking poles and Connor has solely been relying on a very stable tree limb that he was using.  We both said that we WOULD NOT HAVE MADE IT if it wasn’t for that tree limb and trekking poles. Our poor, poor bodies. We finally made it to Bear Lake to refill water after much desperation and tears related to our poor judgment of water intake early in this journey. We only had 0.9 miles until we would reach the summit of Mount Garfield with an amazing view and 0.2 descent until we reach Garfield tent site. Well, those 0.9 miles Connor had managed to roll his ankle another three times out of poor foot placement due to exhaustion and I was scared of losing daylight. This was our first backpacking trip ever so we really needed to be at the tent site before sunset.  So we finally reach the summit of Mount Garfield, which took us a ridiculously long time, didn’t even care about the view and quickly made the descent to the tent site. The caretaker was very, very impressed on our 16-mile day and our preparedness to take on this hike. Connor had thrown up twice because of pure dehydration, we both only ate half of our dinners. Of course we come to find out that my sleeping pad had a hole in it, and Connor being the type of guy he is, he slept on it.

The next morning the caretaker had informed us that the Mount Washington weather forecast had drastically changed for the next 24 hours and there was a snowstorm rolling in. Yes. A snowstorm on June 2. Our temperature rating on our sleeping bags was only 30 degrees and the high was supposed to be 20 degrees.  We took it upon ourselves to exit the hike and not be in over our heads about this. Our bodies were sore, we were mentally and physically at our breaking point. We both are in pretty good shape, but damn it had been a long winter without any hiking. The hike down was amazing. The very beginning was so steep that we literally thought that it was a waterfall but the rest of the day was moderate and then a very long flat trail. We both had blisters and my knee was throbbing at this point but we got it done.

The Pemi bridge contained more emotions and thoughts that we thought an inanimate object could bridge. I literally fell in love with that bridge. It felt so good to accomplish something that I didn’t think that I could. It felt amazing to accomplish it with my love of my life. That was by far the hardest thing I have ever done, and somehow the mountains are calling me to do the other half of the Pemi Loop.  The first half of the Semi Pemi was amazing and the only thing I would do differently would be to not be an idiot and stop at Liberty Spring campsite for water. So listen y’all, TELL YO FRIENDS.

Hey! I'm Kayla, a Bostonian AKA a "Masshole" born and raised. I’m an inpatient bedside nurse while I'm off trail and still a nurse on trail because well, once a nurse you really can't shake it. Backpacking huh? What's that you ask...? Lets find out together.