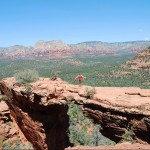 How to Stop Traffic

The “trail” from Key West to mainland Florida isn’t a typical hiking trail. Sometimes there’s a paved bike path called the Overseas Heritage Trail, but other times I found myself walking in the breakdown lane along busy Route 1, the main road.

Early on my second day, a jeep stopped just a head of me, and the driver’s window rolled down as I walked past. The driver asked, “Do you need a ride?”

“No, but thank you so much for asking!” I said.

Later that day, another driver asked me if I wanted a lift, and it became normal for at least one person to pull over for me every day in the Keys. It surprised me that so many kind women and men stopped to check if I was okay.

Just past the 100 mile mark of my hike, I found myself in Key Largo with a 10 mile road-walk to mainland Florida. I kept my head down and walked against traffic. After about fifteen minutes, a police cruiser passed. Its lights flipped on, and it pulled into the breakdown lane behind me. I took a deep breath and walked back to the cruiser’s open passenger window.

As I leaned down to talk with the officer, I fixed what I hoped was a reassuring smile on my face.

“What are you doing?” he asked.

“I’m walking from Key West to Quebec,” I said.

“To Quebec?” He raised his eyebrows at me.

I nodded. “I’ll be on a hiking trail soon. But I have to take this road to get there.”

He sighed. “Well, alright. Walk on the grass when you can.”

I waved as he drove away, my heart thudding. For a terrifying moment, I thought he would say I couldn’t continue walking.

During the few hours it took me to finish Route 1, one other law enforcement officer and twelve other drivers stopped me. They all asked me if I needed help. When I finished the road-walk, I was thrilled to be away from all of the helpful people. They had good intentions, but some of them actually argued with me when I told them I didn’t need a ride. It became irritating to have to justify myself to strangers.

Over the next few weeks, I met other hikers who started in Key West as well, and I asked them if any drivers had stopped them. One of them told me he hadn’t been stopped at all, and another said he had been offered a ride once. Both of the other hikers were men. When I walked along another road a couple weeks later with another (male) hiker, a car pulled over. I expected them to ask if we needed help, but instead they asked him for directions.

The experience was interesting to say the least.

Hi! I'm Emily, but I go by Fine Line when hiking. A few years ago, I hiked through Maine, New Hampshire, and Vermont on the Appalachian Trail. In 2018 I'll be thru-hiking the Eastern Continental Trail (ECT), which leads from Key West, Florida to Cap Gaspé, Quebec. In the process of completing the ECT, I'll also hike the Florida Trail and the Appalachian Trail.