Lost on Katahdin: An Incredible Story of a Boy’s Survival

For nine days 12-year-old Donn Fendler struggled through the wilderness surrounding Mount Katahdin in Maine, lost after being separated from his father, brothers, and friends while hiking the mountain. His feet were torn to shreds by rocks. His body was covered with bug bites. He saw ghostly images of people he thought had come to rescue him.

And on the ninth day, when he stumbled out of the woods and into the arms of rescuers, he weighed 58 pounds—16 less than the 74 pounds he weighed on the day he lost the trail while descending the Katahdin summit.

Fendler’s ordeal gripped the nation for days in 1939, even after searchers gave up hope of finding the boy alive. His story has been retold in a book,  Lost on a Mountain in Maine, in 1939, and in a documentary film in 2011. 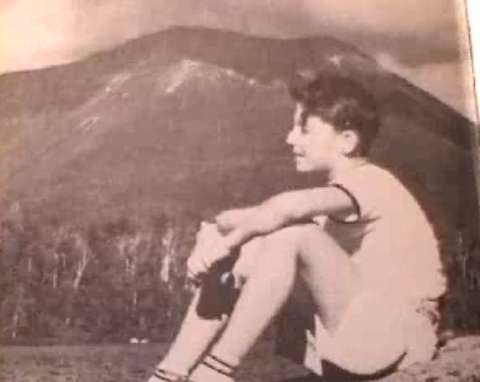 His story began with a day hike up Katahdin on the Hunt Trail/Appalachian Trail on July 17, 1939. Fendler and friend Henry Condon had reached the summit while Fendler’s father, Donald, brothers Tom and Ryan, and friend Fred Eaton were still climbing up. Icy blasts of wind swept over the cloud-encased summit. Fendler, shivering in the cold, decided to head down the Hunt Trail alone despite Henry’s objections. Henry wanted to wait for a man they saw approaching from the Knife Edge so they would have an adult accompanying them off the mountain.

Fendler, wearing a fleece coat, jeans, and sneakers, didn’t get far from the summit before losing the trail.

“Everything looks different in the clouds,” he said of that first day descending the mountain. “You think you see a man and he turns out to be only a rock. It kind of spares a fellow, especially when you are alone and awfully cold.”

Although he knew he was lost, he decided the best thing was to get off the mountain, which that night was pounded by sleet and a 40-mph wind. The temperature dropped to 40.

Descending the mountain through boulder fields, he made it to the forest, where he found shelter under a tree. Before falling asleep he said prayers, which he would continue to do morning and night throughout his ordeal.

It was when he woke on his second day that he saw his friend Henry, sitting by a nearby stream.

“You may think this was a dream, but it wasn’t,” he said in the book. “I know it wasn’t a dream, even though it sounds crazy now.”

Four ghostly figures appeared. Then he saw his father drive up in a car.

Fendler ran toward his father, screaming, “Here I am, Dad!”

He fell in a stream, and when he pulled himself out of the water the figures he saw were gone.

As he got over his disappointment about the possibility of being rescued, Fendler realized that it was up to him to stay calm and search for a way out of the woods. It was up to him to use his Boy Scout training to find his way to safety.

So he followed the water for days, losing his sneakers and jeans along the way. He fought off clouds of mosquitoes and other biting insects. He ate strawberries, but shunned other berries because he wasn’t sure what they were. Twice he encountered bears at berry patches, but they moved away without harming him.

He found abandoned cabins on separate days, and took a blanket from one cabin to help stay warm. A plane passed overhead but he couldn’t draw its attention.

His feet were a mass of cuts, he lost part of a toe, and his knees were badly swollen. But still he struggled on.

On the eighth day, he fell and lay on the ground for a while. He felt something grab him by the shoulders and slowly, gently pull him to his feet. But when he looked around, he didn’t see anyone.

“Your Guardian Angel must have been helping you,” Fendler’s father said in the book.

“He was pulling me along,” Fendler replied.

On the ninth day, July 25, he came to the East Branch of the Penobscot River. Fendler saw a man across the water and began yelling.

Nelson McCoarn and another man canoed to Fendler and brought him to the McCoarns’ sporting camp. Lena McCoarn fed him soup, and got Fendler’s parents on the phone. His ordeal was over. 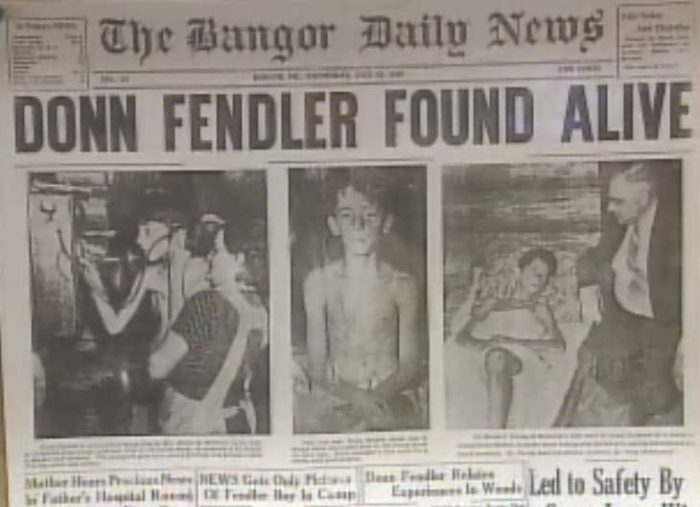 In reconstructing Fendler’s story, Maine woodsmen estimated that he walked 35 miles. His path took him from the west side of Katahdin, north of North Turner Mountain and Twin Ponds, and then southeast to the McCoarns’ camp, near Stacyville. At the time, it was an area seldom traversed.

Hundreds of people combed the flanks of Katahdin at the height of the search. Bloodhounds tracked the boy’s scent to cliffs at Saddle Spring, where the trail was lost and the dogs called off because their paws were torn and cut by rocks. The searchers concluded that Fendler fell down the side of the plateau in that area.

The search parties dwindled, but Fendler’s father never gave up hope. He encouraged some searchers to focus on the woods below the Katahdin plateau. Searchers later determined that they were never within ten miles of Fendler after the first day.

A year after emerging from his ordeal in the woods, Fendler visited the White House, where President Franklin D. Roosevelt awarded him a medal recognizing him as the outstanding youth hero of 1939. Parades in his honor were held in Millinocket, ME, and Rye, NY, where he lived with his parents. He was the subject of a story in Life magazine. 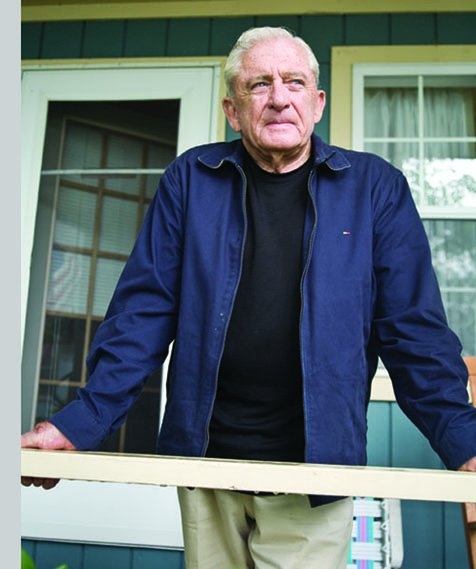 Donn Fendler was always willing to share his story of perseverance and survival with schoolchildren. Photo courtesy of John Thurlow.

Fendler went on to live a full life. He fought in World War II and Vietnam, and retired from the Army as a lieutenant colonel. He spent summers in Maine with his wife,  Maryrose. They had three daughters and a son.

Fendler’s story lived on in Maine, where his book became a children’s classic. He spoke to students about his ordeal for years.

His story was retold in a documentary in 2011: Finding Donn Fendler: Lost on a Mountain in Maine 72 Years Later. The filmmakers are hoping to turn Fendler’s story into a feature film. Fendler also collaborated on another book, Lost Trail: Nine Days Alone in the Wilderness, that was published in 2011.

Fendler, who died on Oct. 10, 2016, in Bangor, ME, at age 90, never turned his back on the ordeal that drew national attention, and was always willing to tell his story to schoolchildren.

“I tell every one of them they have something inside them they don’t know they have,” he told The Associated Press in 2011. “When it comes up to a bad situation, they’re going to find out how tough a person they are in the heart and the mind—it’s called the will to live.”

The ATC Asks People to "Please Stay Off the Appalachian Trail," Including Day Hikes