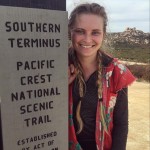 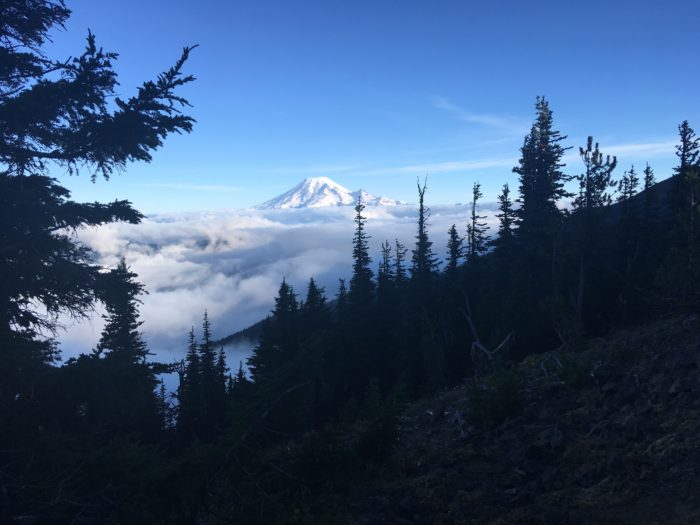 Washington is my Cathedral, my playground, my challenge. I had a couple visions playing in my mind of what would happen when I crossed the border into Washington. In the first, I’d drop to my knees and sob, for everything that Washington had represented to me over the past year. For all the ways that I’d grown there, the people I’d met, the things I’d vow, on principle alone, not to regret. In the second vision, there was a drum with an animal skin stretched across its top, its circumference big as an old redwood tree, positioned up on a ridge overlooking one of Washington’s jaw-dropping vistas. I’d come up on that drum while wind came whipping over the ridgeline (cue Eddie Vedder) and whale on it like it pumped the heart of the whole earth beneath me. I wasn’t sure which of these two would manifest when I crossed into Washington, but now I do. I’ve got the drumsticks, who’s bringing the drum? 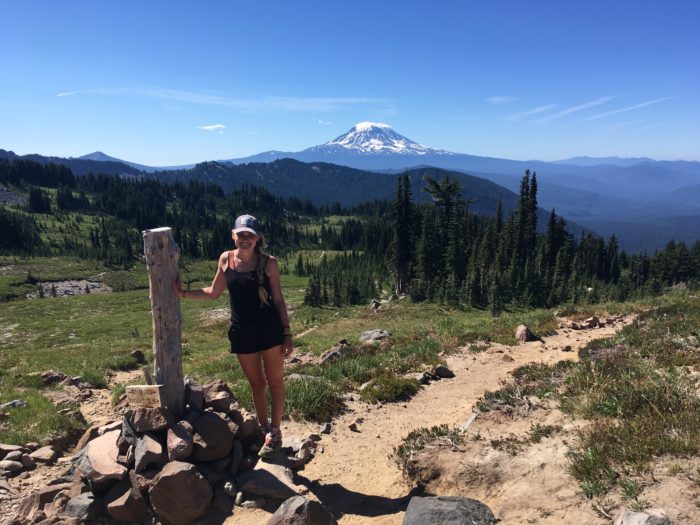 I’ll cede to reality here and say that I did cry when I crossed over the Bridge of the Gods into Washington. I cried as soon as I saw the Welcome to Washington sign. But it wasn’t out of sadness, it was joy bubbling up out of some place I didn’t know existed. It surprised me a bit, how I spent the second half of that bridge walk in a dance between gasping for air and laughing, blurred by tears as I navigated the narrow bridge against traffic. When a man drove by and yelled a Woohoo! to me and raised his hand out the window in a Shaka sign, I totally lost it. I’d walked here. For hundreds of miles, I’d walked to this bridge, to this border, and he knew it. It felt so good to release that flood of emotion, from whatever recess it came from, and enter this state feeling ready for the drum. 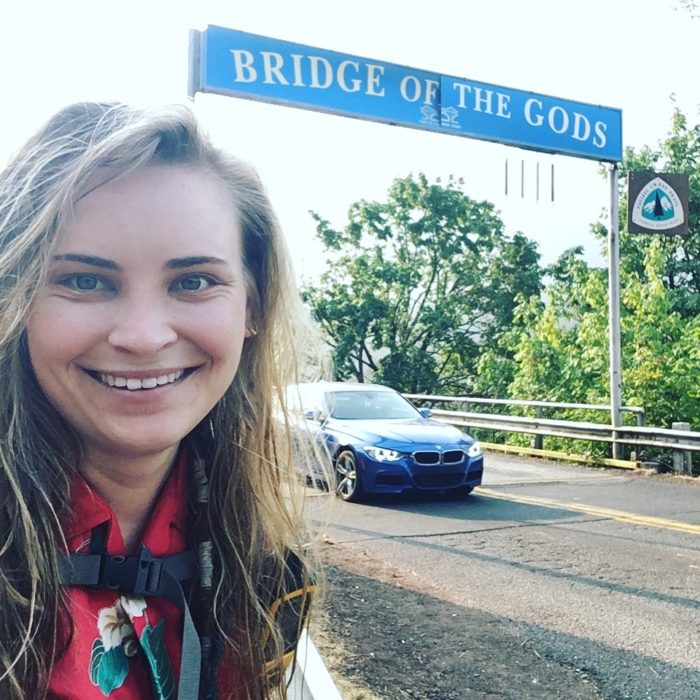 Then Washington did what she does best: she got real fickle. I had to climb 4000 ft my first day out of the Gorge, and she hit me with a 98 degree day. I don’t know that I’ve ever sweat so much in my life. All of my clothes were soaked, my backpack straps were soaked, and the exposed skin on my arms and legs had rivers of sweat running down them. The summer after my freshman year of college, I studied monkeys in the rainforest of Costa Rica, and I think that’s the only sweat level comparable to this day. In Costa Rica, I put some of the clothes I’d sweat through into a garbage bag for laundry day, tied it up and stuck it under my desk. Come laundry day, when I opened that bag, oh my god. I think I just threw it away, hopefully someone burned it. 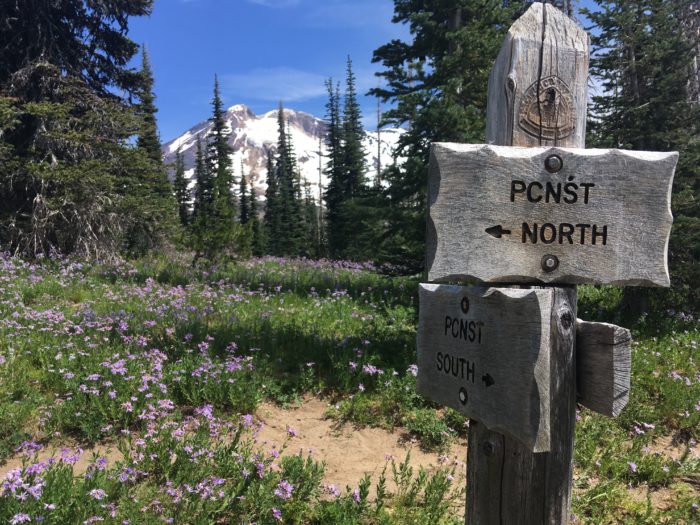 I had phone service at one point and sent a selfie to an old coworker, who showed it to another coworker who said, “Yep, looks miserable!” It was. “You’re suffering!” she said, and asked if that was one of those moments when I’d start to wonder why I’d done this, maybe regret it a little. Nah, I said. These are actually the moments that make it all worth it. If someone came in and built a sky bridge across the Gorge so that PCT hikers didn’t have to descend 4000 ft only to hike back up it again, I have a feeling they’d get a nasty response. Yeah it’s really, really tough, but also allows you to set mini goals: I’m going to make it to the top of this. After that, I have no plans but Canada. But I’m going to make it up this. And you do. You push and you sweat and you grind, and you go to sleep with a huge smile on your face for all the things your body and mind are allowing you to do. 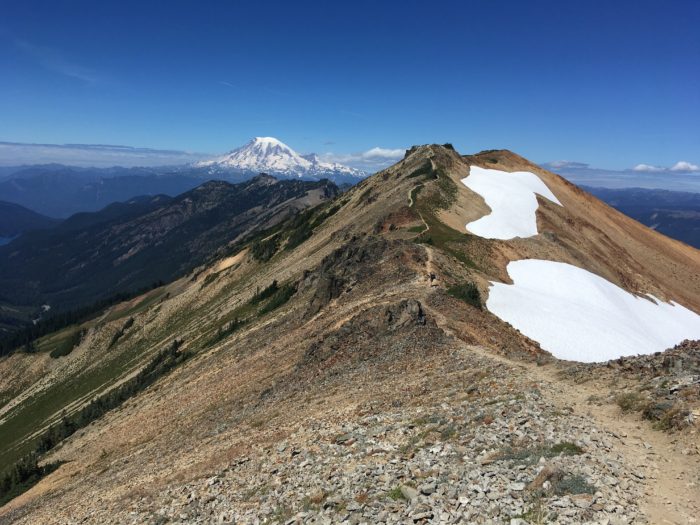 There was smoke from the Indian Creek fire and smoke from the fire in British Columbia casting a haze over the whole of Washington. I told myself that if I got into the Goat Rocks Wilderness and couldn’t see the stunning views or any of the mountains I love, I’d quit Washington and do it another year. I crossed my fingers for rain to come in and clear it all out, and two days later it poured all night and half of the next day. Hallelujah! Many hikers said it was the first rain they’d seen on the trail in 120 days, and I was so thankful for it, even though my vestibule stake gave up during the night and my shoes got soaking wet. Rain! My beautiful, wet Washington. The Washington I love. The Washington that scares so many people away. The Washington that yields. 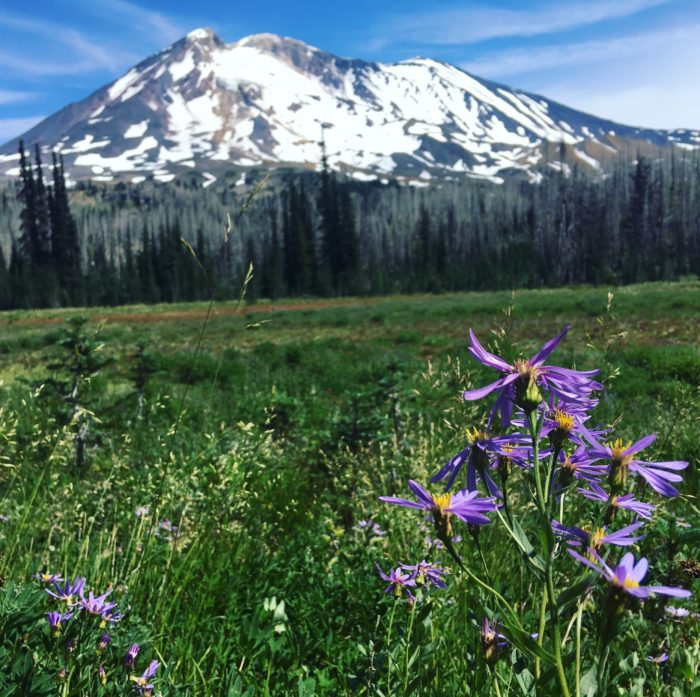 As I looked out of my tent at the cloud I was in, I thought about the task of peeing. The morning pee is always the most urgent pee. I could put on all my rain gear, pop out to pee, then get back in the tent all wet and freezing. OR. Or, I could pee in my tent…in a ziploc bag. I’d peed in a nalgene at burning man many times to save myself the trek out to the portas, so how hard could it be? Mind you, I did have a pee funnel at burning man, but I didn’t have one now. I shuffled around the tent and found an unused quart ziploc, the chosen vestibule. So it worked, but I wouldn’t say it went great, and I did end up having to wipe some pee off the bottom of my tent. But, uh, sterile, right?

Speaking of pee, I’ve been gifted my first UTI of the trail, though I can’t imagine why. I’ve only had one other UTI in my life, but when I went to my general practitioner before leaving, we thought up everything that could go wrong while I was living in the wild. Giardia, yeast infection, UTI. So I have meds! And the UTI Day 4 report is that meds work, and I’m a happier camper. 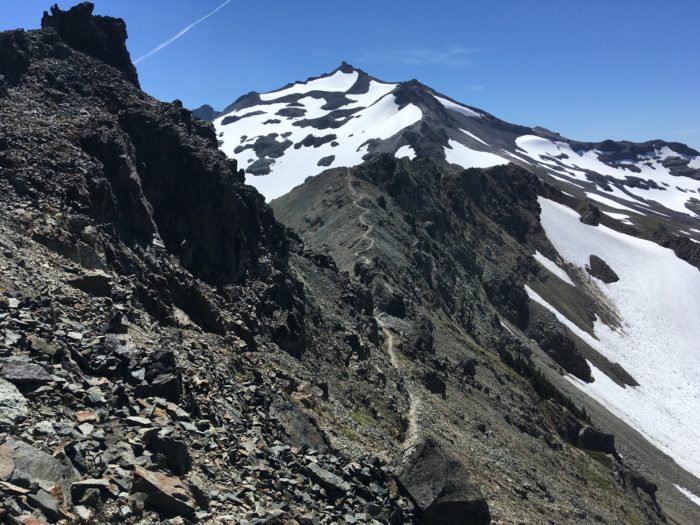 Hiking for days on end gives you a chance to honor the space between no longer and not yet. If you know me, you know how much I loathe this space. I’ve learned there are a number of ways to approach it, but will mention just one for now. As you hike more and more and the days turn into weeks turn into months, the senses change. I’ve started to notice the difference in the way the forest smells in the sun versus in the shade. I know the calls of different birds and marmots. I can tell that I’m close to water by the way the greenery changes on the forest floor beneath my knees. I’ve learned the difference in sound between wind, flowing water and, hopefully, the roar of a bear. It’s an exercise in mindfulness, this tapping into the everyday, the noticing of nature’s common themes, and it calms. Reminds you that you’re taking this at foot speed, and that this attunement is rare. The exercise is drawing gratitude from it. 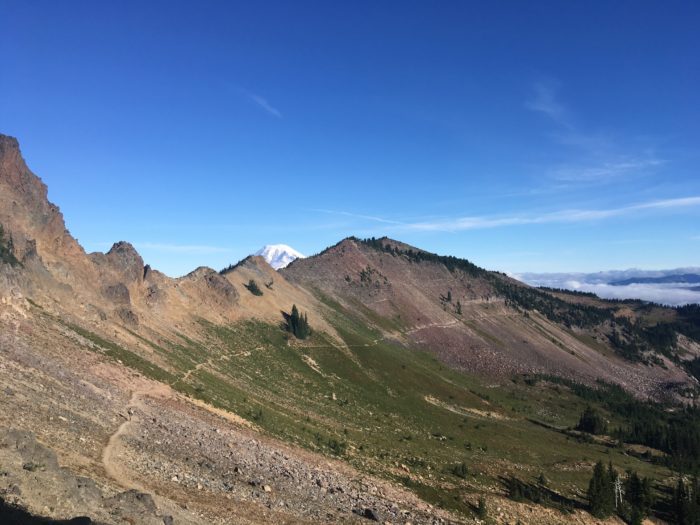 I made an unplanned stop in Trout Lake because everyone on the trail would not stop talking about the huckleberry shake there. I needed this huckleberry shake. Food is a heck of a motivator on the trail, and that shake did not disappoint. I also got myself a turkey sandwich that I packed out, climbed up above 6000 ft and found a secret side trail that took me to a panoramic view of Adams, St. Helens and Hood. I ate my sandwich on a big rock in the sun and when I was done, I spotted Rainier for the first time, off in the distance between the trees. I stood up on the rock and leaned left and right trying to get a better view. How cool it was to see her again after my summit attempt. 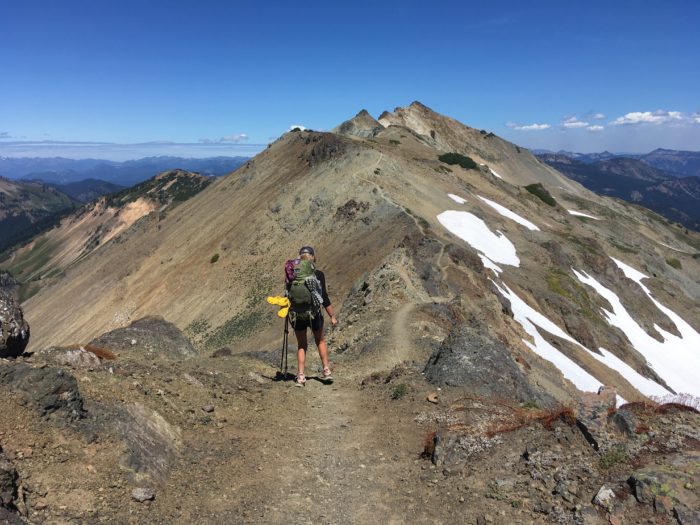 They say that the Goat Rocks Wilderness is often the PCT hiker’s favorite day in Washington, specifically the day that traverses over the Knife’s Edge. I was excited for it, but this meant more day hikers and backpackers and noise. It also meant vertigo. The Knife’s Edge, aptly named, takes hikers a couple miles along the spine of a series of hills near Old Snowy. Parts of the trail were eroded, covered in shale or scree, or just really loose and gravely. The parts that were covered in snow were the sketchiest, with sheer drops off one side and the afternoon sun making the snow slushy and slick. I spent most of the section with a death grip on my poles and probably peed myself a few times (hence the UTI?). I’m not sure I’d do it again, but the panoramic views were incredible, surrounded by all those gorgeous mountains. 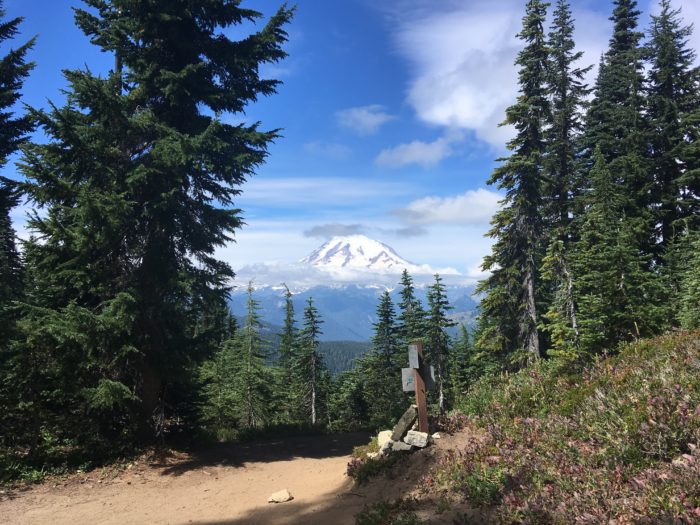 From there I made the descent to my next resupply and a care package from my grandma. I got to take a shower and do laundry and visit the lake I’d camped beside two months before, on my first night after leaving Seattle. I was interested to see what it’d be like to stand there in that campsite again, to see whether I could recognize a change, if there’d been one. I’d felt a pure happiness the last time I’d been there, like I’d let go of a lot of things to make room for an unknown better. Standing there again, the feeling was the same but now it has a hard boundary around it, like the crest of a volcano. An armor. Like it’s protected now, deepening, all mine, a force to be reckoned with. Where’s that drum?

Hi! My name is Kate. I thru hiked the PCT in 2017, and took on a Mt. Rainier summit attempt as part of the journey. My trail name is Vaya, which means 'Go' in Spanish. Vaya bien!