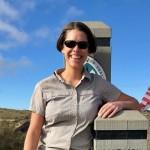 The Pacific Northwest National Scenic Trail is a 1,200-mile route crossing the northern reaches of Montana, Idaho, and Washington. It was dreamed up and pioneered in the 1970s by an avid backpacker named Ron Strickland. He envisioned a trail starting at the Continental Divide and finishing at the westernmost point in the Lower 48. 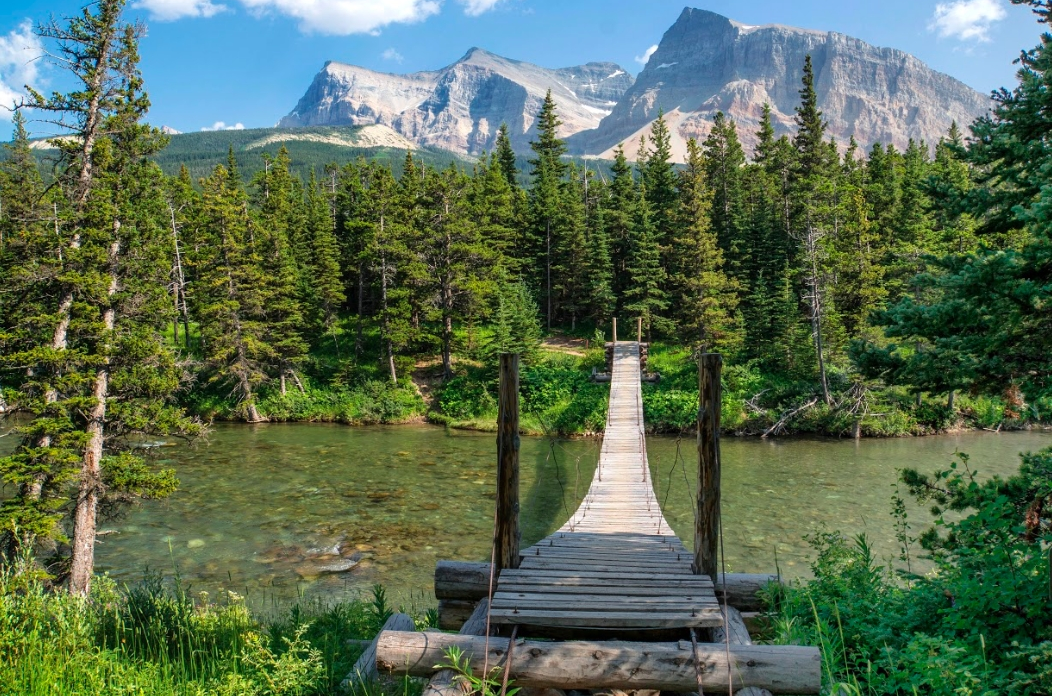 By 1974 Strickland had identified a preliminary route for the trail and in 1977 he founded the Pacific Northwest Trail Association. Over the decades the PNTA worked to develop, preserve, and protect the trail corridor. Thru-hikers on the PNT would experience a wide variety of scenery, including old-growth forests, high mountain ridges, alpine meadows, rugged beaches, sagebrush parklands, diverse wildlife, and historic towns.

“The Pacific Northwest Trail starts like a drop of rain on the flanks of the Continental Divide and winds its way west, like a river that flows to the Pacific Ocean.”
-Ron Strickland, founder of the PNTA

On March 30, 2009, the Pacific Northwest Trail was designated as a National Scenic Trail as part of an Omnibus Public Lands Management Act signed by President Barack Obama. This year the trail is celebrating its tenth anniversary, yet many adventurous hikers have never heard of it. Let’s set the record straight.

Pacific Northwest Trail by the Numbers 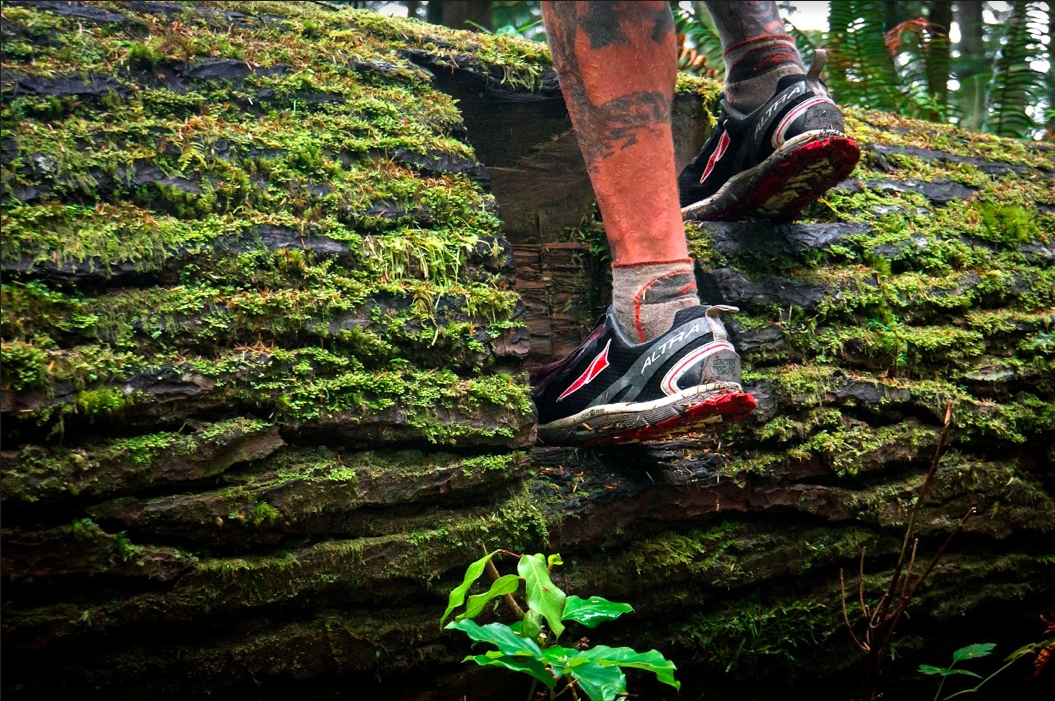 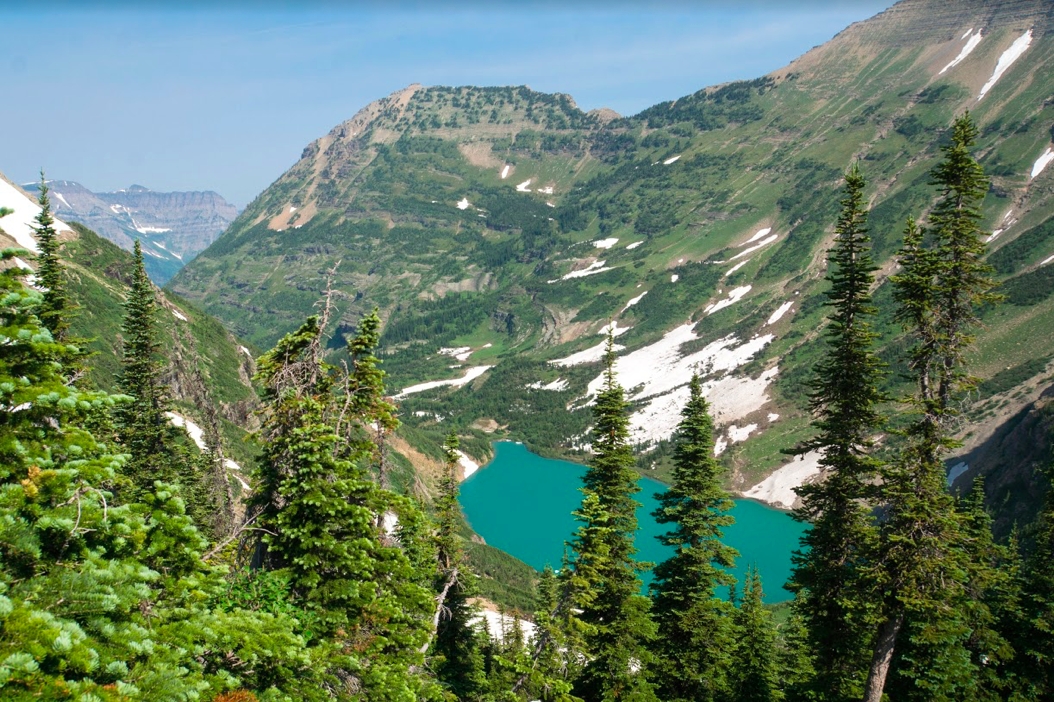 Over 90% of PNT thru-hikers choose to start in early July in the northeast corner of Glacier National Park. For over 150 miles the trail travels the Rocky Mountains. These first and second sections of the trail feature soaring peaks, high passes, glacial valleys, off-the-grid communities, and a half-dozen historic fire lookouts. The trail crosses the Montana-Idaho border partway through the second section and drops into the narrow Kootenai Valley.

If you’ve ever wished you could squeeze a thru-hike into a summer vacation, then this trail is for you. The PNT may be a short trail, but its condensed, epic, mountain-to-sea route will leave you deeply satisfied in ways that other trails just can’t. -Eric Wollborg, PNTA communications manager

The next segment travels over the Selkirk Mountains and includes a five- to ten-mile undeveloped section of trail. There are a couple of suggested routes and hikers must be prepared to move slowly as they bushwhack through. There’s also a brief area of temperate rain forest along the Idaho-Washington border.

Sections five and six cross the Kettle River Range and the Okanogan Highlands. The climate becomes drier as hikers cross the Columbia River and join the Kettle Crest National Recreation Trail. This area of Washington is rich in mining history, with a number of ghost towns and abandoned mines. The halfway point is at the end of these sections in the city of Oroville. 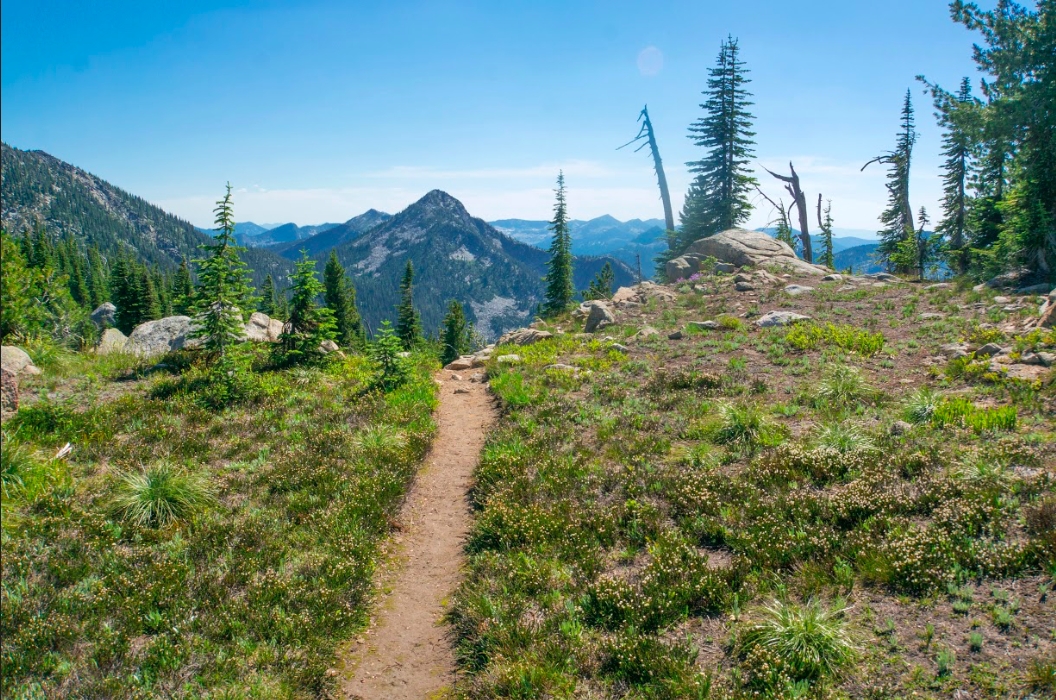 Next up is a long climb into the Pasayten Wilderness and the North Cascade Mountains. These sections hold the longest stretch of roadless trail. There is some significant fire damage in the Pasayten Wilderness and its remoteness hampers trail crews from doing much work. Partway through this region hikers enter North Cascades National Park, which preserves old-growth forests, volcanic peaks, and some of the most active glaciers found in the Lower 48.

Then the trail reaches the ocean. Puget Sound is a glacier-carved channel with many bays, islands, and peninsulas. The trail traverses two islands and hikers get to enjoy a bounty of local services along the way. This section ends with a ferry ride over to the Olympic Peninsula.

The PNT spans the largest wilderness in Washington as the trail ascends toward the highest peaks of the Olympic Mountains and descends through the temperate rain forest of the Bogachiel River. Hikers may spot mountain goats and sheep, black bears, and the famous Roosevelt elk. This area is home to unique and endemic plants and animals.

Finally, the trail reaches the Wilderness Coast. For 60 miles hikers travel by the tides along a rugged coastline. This section involves beach hiking and muddy scrambling over rocky headlands. The wealth of wildlife is incredible, ranging from eagles, ravens, and hawks, to seals, otters, and whales. The terminus of the Pacific Northwest Trail is at Cape Alava, the westernmost point in the continental United States. 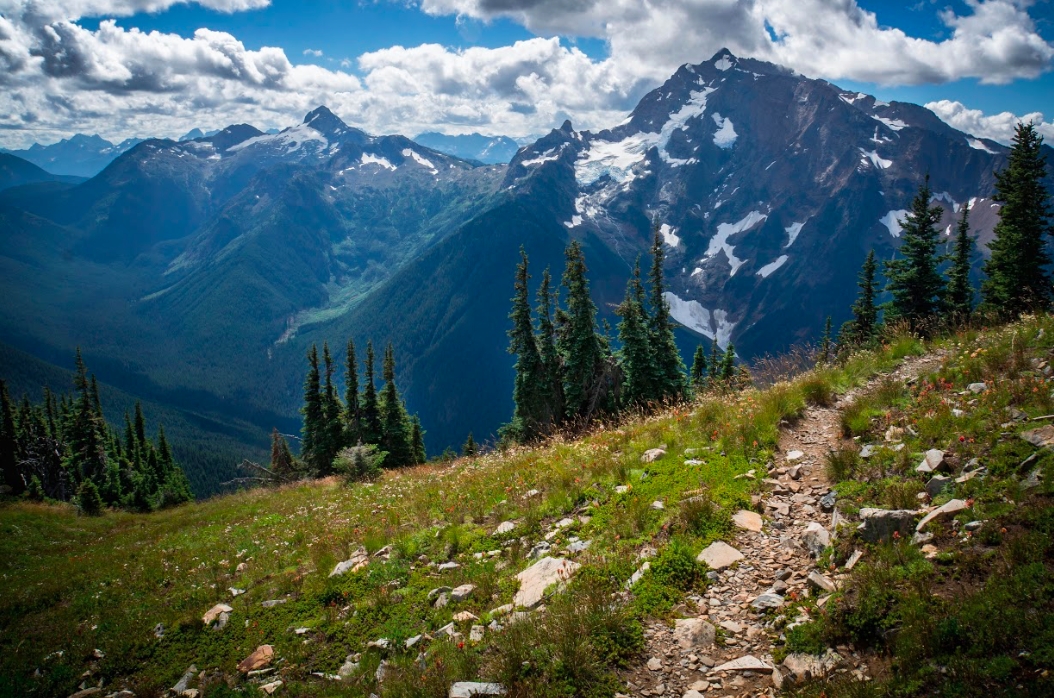 Both ends of the trail are in remote and difficult-to-access locations.

The eastern terminus is located at the Chief Mountain Trailhead in the northeast corner of Glacier National Park. Arrange a ride with family or a friend, or hire a taxi to get to the trailhead. The western terminus is at Cape Alava in Olympic National Park. Again, hikers need to arrange transport via family or friends, or hire a private shuttle from Forks, WA. The midpoint of the trail is at Oroville, WA. It can be reached via public transit.

The Pacific Northwest Trail website has many more details about transportation to and from the trail. 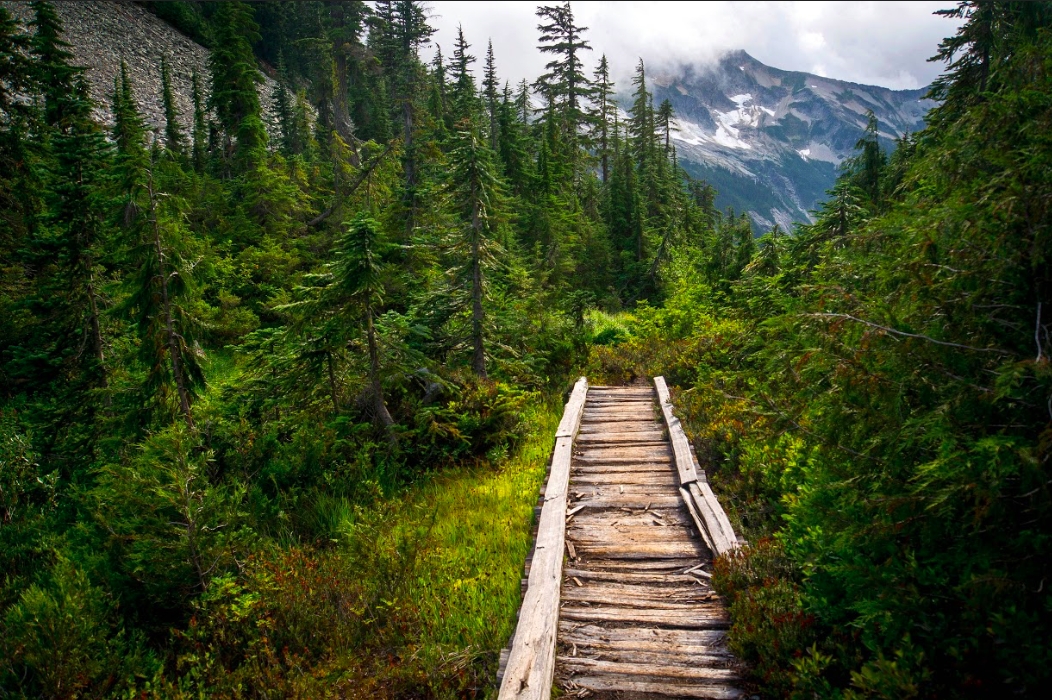 Even in the middle of the wilderness, thru-hikers will find a variety of friendly and helpful trail towns where they can resupply. Hikers walk right into over a dozen towns without stepping foot off the trail. In many of these towns the trail follows right along an historic main street. Another nine towns are within ten miles of the trail.

While many of the towns are small, some are becoming more aware of the thru-hikers visiting them and are starting to develop more services and better resupply options. Hikers can also mail prepackaged resupply boxes to all of these towns. For more information visit the PNTA resupply and trail towns site. 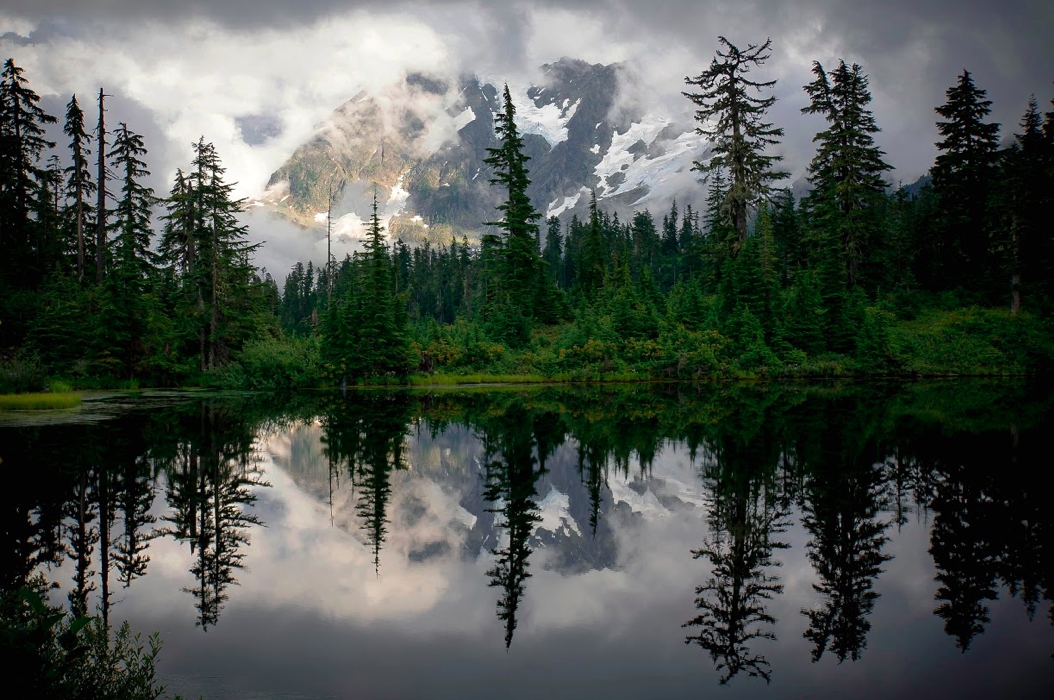 The Pacific Northwest Trail is a very young trail when compared to the PCT or the AT. Expect to follow a combination of surfaces along the route, rather than a continuous stretch of single track and to have lots of Type 2 fun: bushwhacking, navigating overgrown stretches trail, fording streams, and snow travel; and be prepared for wildlife encounters. Most of the trail is unmarked and passes through areas where accurate trail and forest road data hasn’t been available. A GPS unit or a GPS-equipped smartphone as well as a compass are essential gear for safely navigating this trail without getting lost.

A combination of these tools is the best bet for thru-hikers as well as having long-trail hiking and route-finding experience. Trail conditions can and will change frequently and hikers should be confident at navigating this challenging wilderness route. 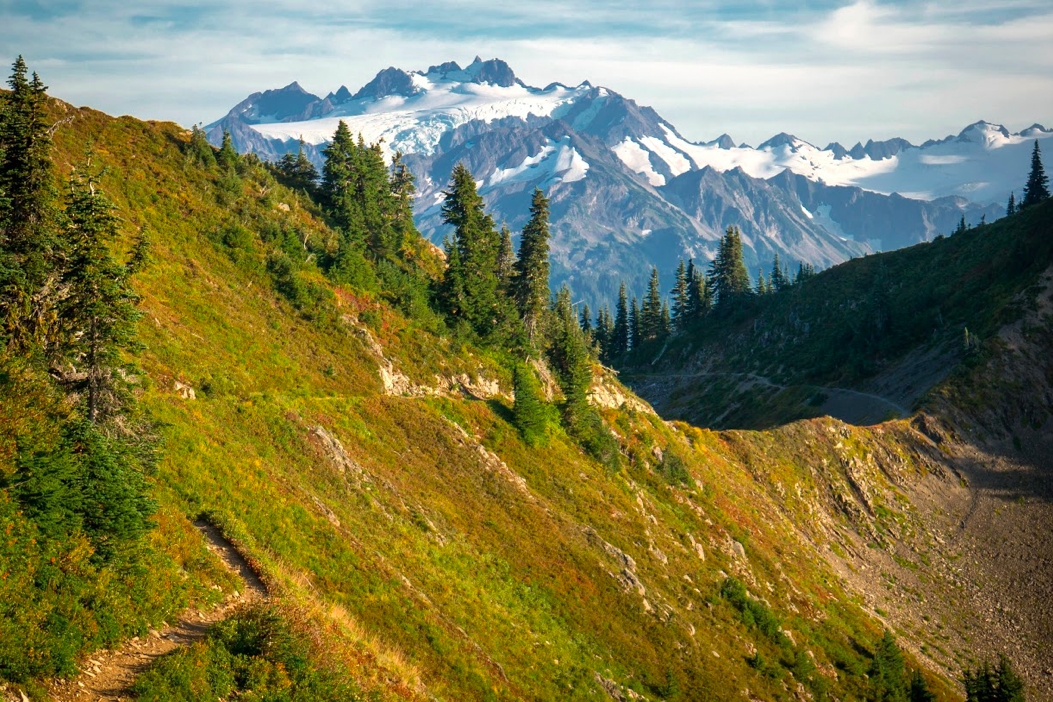 About half of the Pacific Northwest Trail passes through national forests that only require hikers to self-register as they enter a wilderness area. However the trail also crosses three national parks—Glacier, North Cascades, and Olympic. All of these parks require hikers to obtain permits for backcountry camping before entering the park. The permits must include which campsites you’re planning to stop at each night and which dates you’ll be at each site. Visit pnt.org for the most current information about permits and the best ways to get them if you are thru-hiking the PNT. 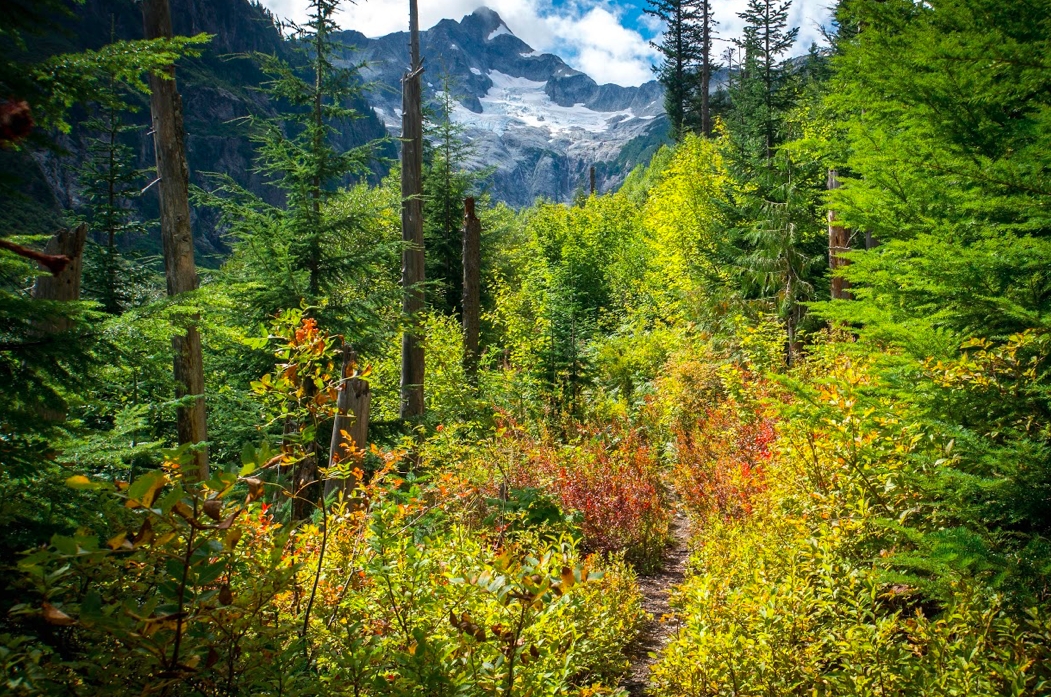 Nearly the entire length of the Pacific Northwest Trail is within or near bear territory. In Idaho and Montana hikers can expect to see grizzly bears. Black bears are common throughout the trail corridor. Thru-hikers should carry bear spray and be aware of best practices when encountering a bear. Appropriate food storage is critical. Hikers are required hang their food every night and are required to use bear canisters while in Olympic National Park. 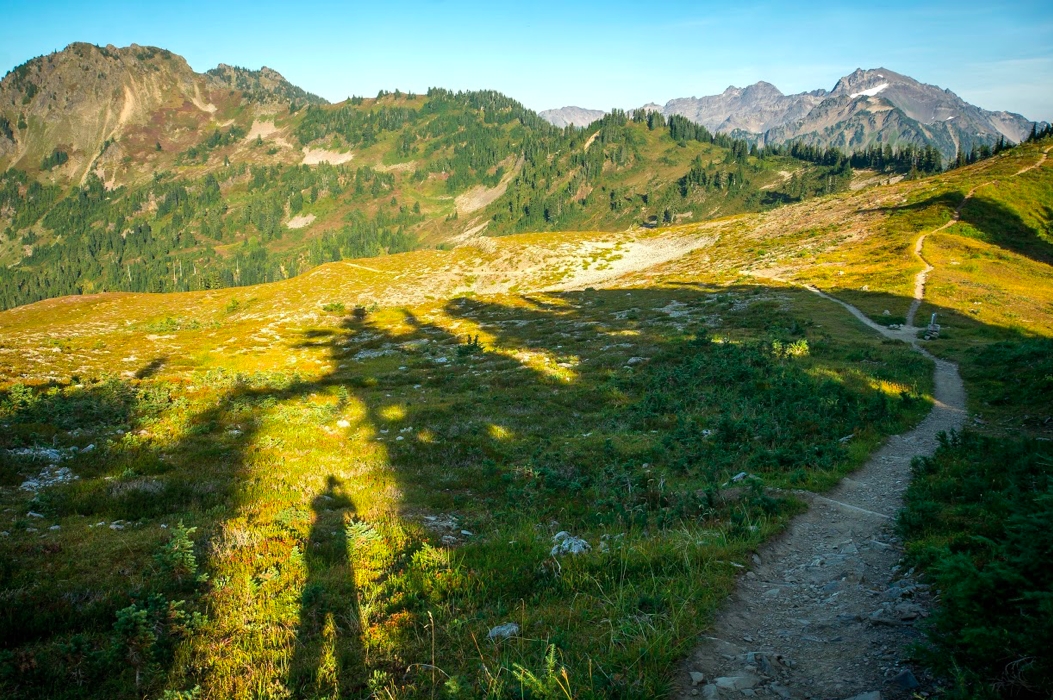 The Pacific Northwest National Scenic Trail is truly unlike any other scenic trail in the United States. It’s a new trail with new challenges and new adventures. The trail is rough around the edges and thru-hikers have an opportunity to be part of the trail’s nascent history. The creation of this trail has given hikers countless opportunities to view untouched natural wilderness along a unique east-to-west corridor. 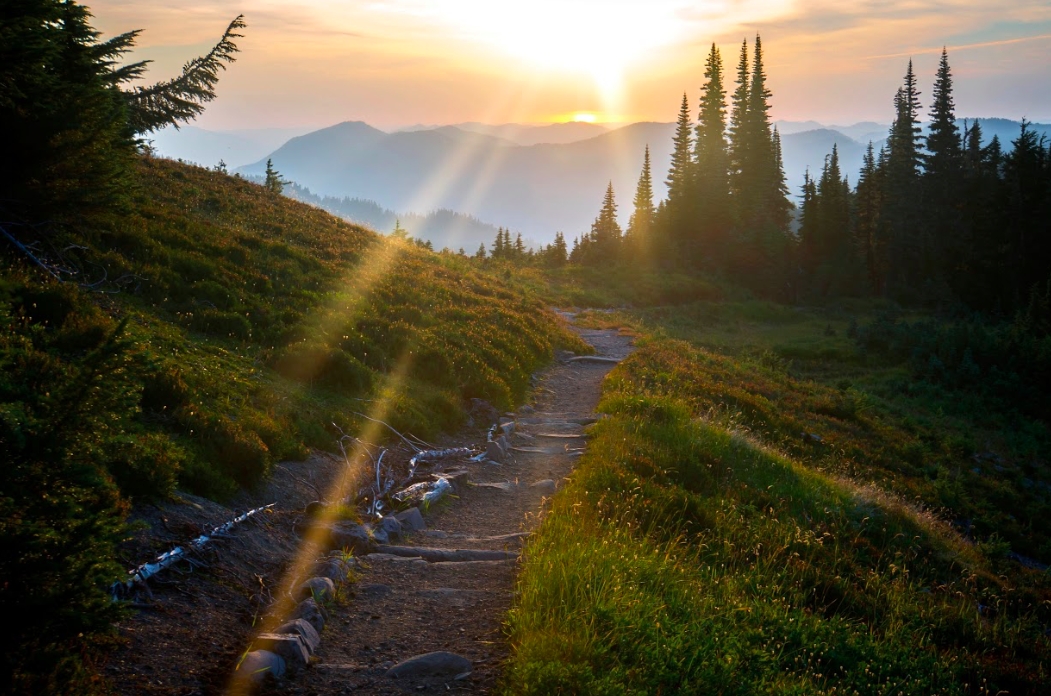 To learn more about this trail, visit www.pnt.org.

All photos courtesy of Jeff Kish.