Hikers all know that one of the keys to a successful backcountry adventure is the food. It is also one of the main challenges. It can be hard to get adequate nutrition during a long-distance hike, even without any restrictions. And if, like me, you do not eat certain foods and/or you fret over the amount of plastic packaging involved in what you take with you, your body’s fuel system is definitely going to require some planning. Luckily, the number of companies producing backcountry eats has exploded in the recent past, and one of those newcomers is TrailFork. 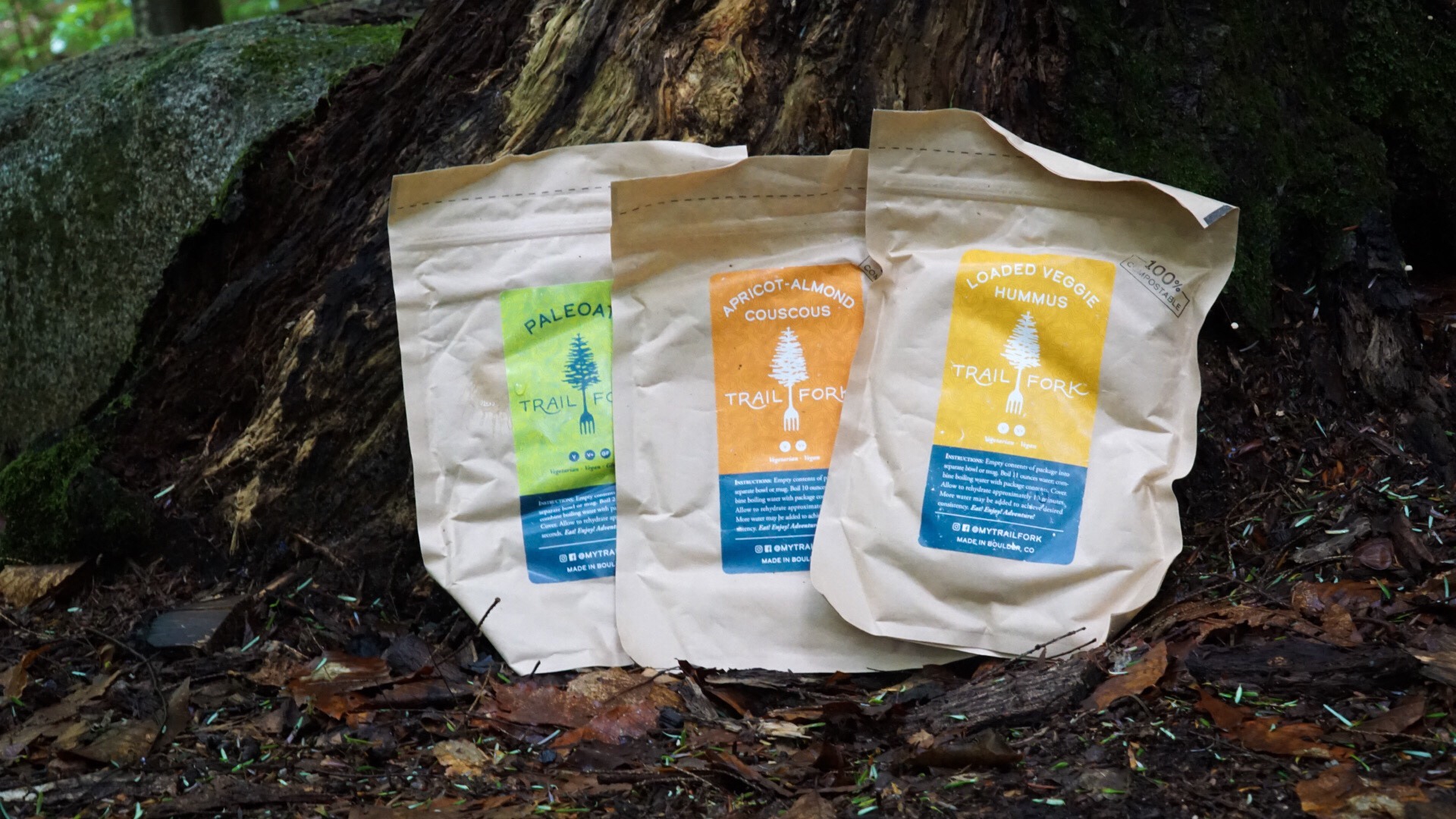 Founded in Boulder, CO, in 2017, TrailFork specializes in creating customized, environmentally friendly backpacking meals based on factors such as your size, dietary needs, preferences, and trip length. Whether you are looking for food that is vegetarian/vegan, omni, gluten free, paleo, keto, or anything else, TrailFork will work with you to create a trip menu that meets your specific needs. 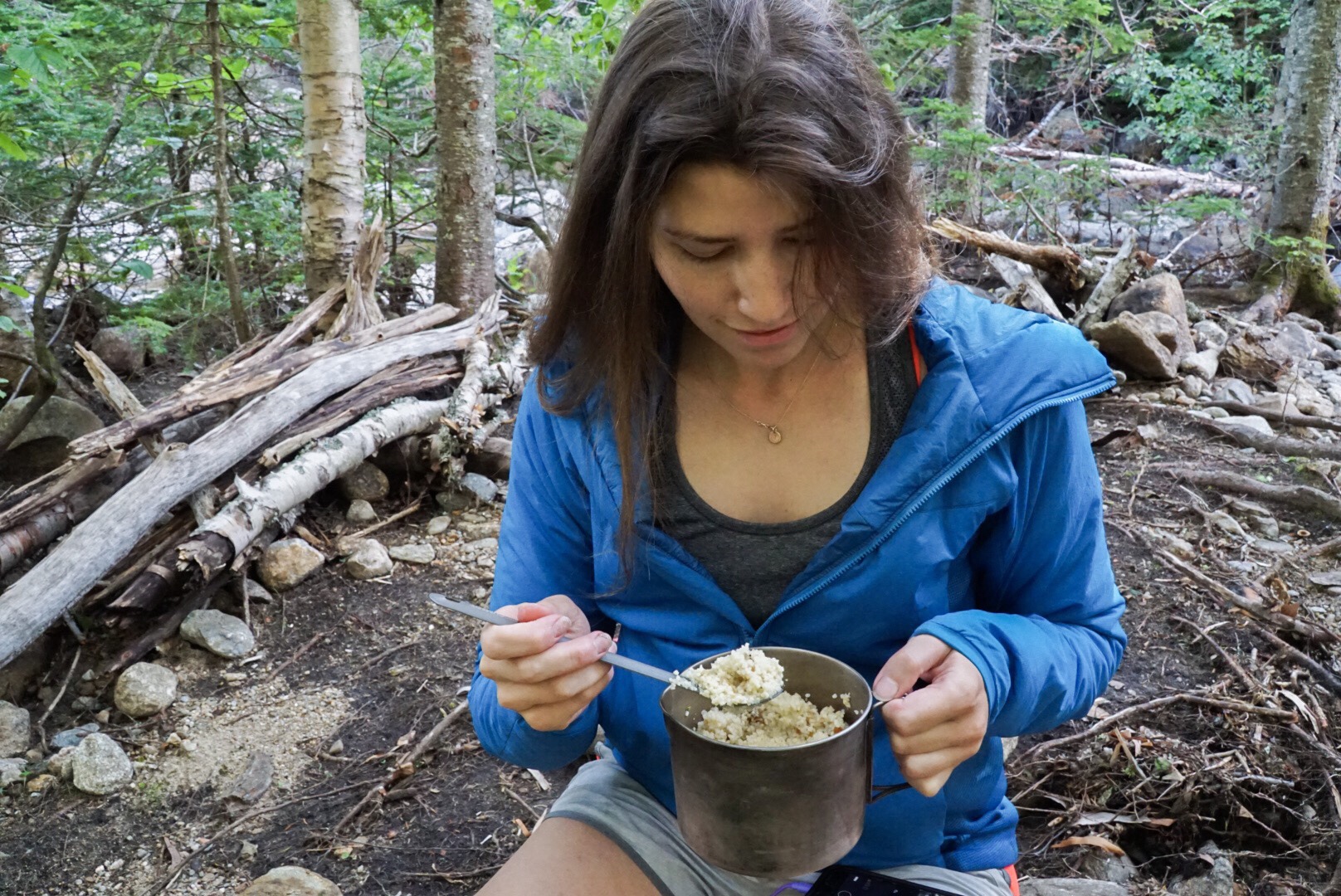 TrailFork graciously provided me two breakfasts, two dinners, and a snack earlier this summer for the purposes of this review. I brought these (along with other typical hiker fare such as cheese, nuts, dried fruit, and energy bars) on two separate overnight trips into the backcountry in New Hampshire’s White Mountains. I made sure to work up an appetite both times–on the first trip I hiked 18 miles the first day and ten the second over terrain that ranged from easy to strenuous, and on the second trip I hiked 14 miles both days over moderate but persistent terrain. I used these meals along with my usual cooking setup, which includes an MSR PocketRocket 2, MSR Titan Tea Kettle, Sawyer Squeeze water filter, BIC lighter, and a spork. I tested for ease of preparation, satiety, and of course, taste.

Vegetarian/vegan: TrailFork’s entire product line is vegetarian, and much of it is vegan. If you opt for a meal plan you can further customize it to be gluten free, paleo, etc.

Company values: TrailFork is a 1% for the planet company, with “environmental stewardship” as its stated mission. It is also a woman owned and led company that supports initiatives to get more women outside. 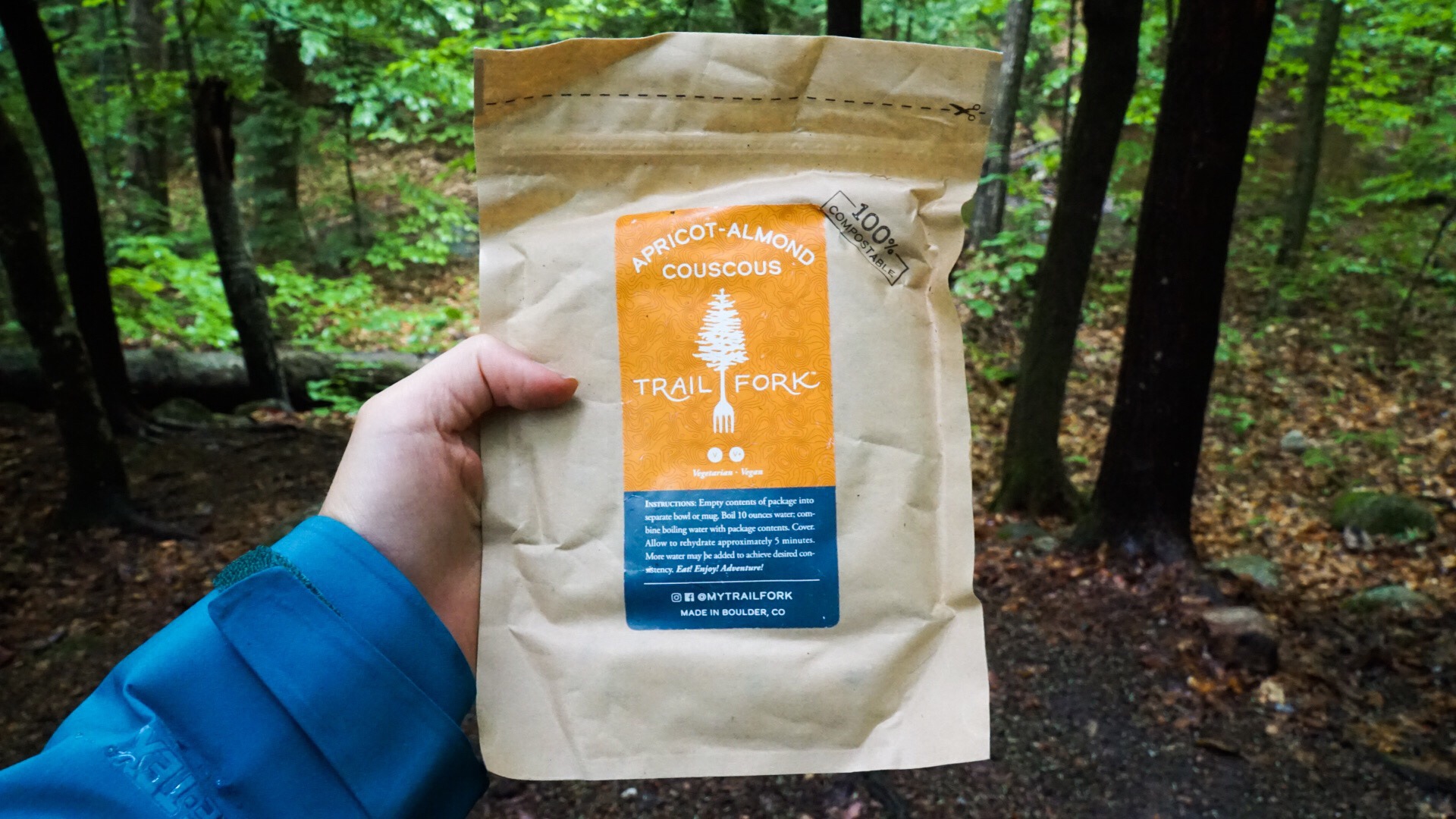 Any time I have tried prepackaged, just-add-boiling-water backpacking meals, they have always been of the variety that rehydrate in the bag. Most hikers (including myself) love these because you don’t have to clean any dishes afterward. Due to the compostable nature of this packaging, however, you most certainly do not want to pour boiling water into it. At first I saw this as a con, but it is really not that great of an inconvenience, especially since the trade-off is that it is very lightweight and better for the environment. Also, the packages are resealable and coated on the inside, so cold-soaking still seems like a viable option.

I decided to take these meals out into the backcountry without reading the instructions on the packaging first, and realized when it came time to cook that that may have been a mistake. TrailFork asks that you boil specific amounts of water that are measured in ounces and greatly vary between individual products (some call for ten ounces, some for eight ounces, some for two ounces, etc.). As someone who simply has two markings scratched on the inside of her cookpot–one at the one-cup level and another at the two-cup level–I at first was extremely perplexed by the direction to “boil 8 oz of water.” It occurred to me after a minute that eight ounces of water is a quarter of a liter, so I tried to eyeball one-quarter of my Smartwater bottle and pour it into my cookpot, but eyeballing has never been a strong suit of mine. I boiled way too much water for the first meal I cooked, Lime-a-beans and Rice, as well as for the Paleoats and the Coconut Granola with Milk. I may have been able to mitigate the problem had I followed another part of the directions, which was to empty the contents of the package into a separate bowl and then pour the boiling water over it, but since I do not carry a separate bowl and usually eat straight out of my cookpot, I simply poured the contents directly into the boiling water to rehydrate. I have to say, though, that soupiness aside, the flavor and texture of these meals were not compromised by my errors, so that is a plus.

Despite my personal struggles to prepare the food as directed, it involved a very simple process. The meals are precooked and dehydrated, so even though you cannot rehydrate these meals directly in the package, all you need to do is add boiling water to the food and cover it, as opposed to actually cooking it. This saves time, stove fuel, and mental energy, which I often have precious little of at the end of a long day of hiking. TrailFork meals also rehydrate very quickly–all the meals I tested were ready less than ten minutes after I added the water–which is a huge plus since I’m usually so hungry that I wind up eating about 40 snacks while waiting for my main meal to cook when I’m backpacking.

I am a newcomer to the meatless life, and even though I lived off Annie’s mac and cheese, ramen noodles, Knorr sides, and instant oatmeal on the AT, I was still nervous for some reason that backpacking food specifically advertised as vegetarian would fail to satisfy me. I was wrong. The portion sizes are very generous and pack a far greater nutritional punch than the aforementioned fare that is more typical of the average thru-hiker. The Lime-a-beans and Rice, for instance, contained 540 calories and 28 grams of protein! It also contained plenty of vitamins A and C, Calcium, and tons of fiber, all of which can be sorely lacking but much needed on a backpacking trip.

So how was the food? In a word, delicious. It was tasty and flavorful in a very wholesome, healthy sort of way. For dinners, I tried the Lime-a-beans and Rice and Apricot Almond Couscous. For breakfasts, I had the Paleoats and the Coconut Granola with Milk. For a snack, I tried the Loaded Veggie Hummus. The Lime-a-beans and Rice were by far my favorite dish. I loved both the lime flavor and the spinach. I was very impressed with the way that the Paleoats and Coconut Granola rehydrated, maintaining quite a bit of structure and not taking on a mushy, mealy texture. And I was impressed with the hummus as well, and welcomed the change of pace from typical hiker snacks. The only thing I did not care as much for was the Apricot Almond Couscous. I found the couscous to be a little bland, and the sweetness of the apricots in my dinner turned out not to be my cup of tea. But for what it’s worth, I still ate every last bite.

These meals are tasty, super light, easy to prepare, and created by folks with a strong environmental conscience.

The directions are not quite as straightforward or simple as one might hope since, unless you carry around a water bottle with ounces marked off, boiling the right amount of water is going to require quite a bit of guesswork. Also, as with almost all backpacking meals, the likelihood that you’ll be able to afford these high-quality foods decreases as the length of your trip increases. They are absolutely affordable for a weekend, but unless you’re a millionaire or nutrition is the most important thing to you, these are probably going to have to be more of a treat than a staple if you are planning a thru or long section hike.

These meals are tasty, nutritious, lightweight, and a great option for backpackers who have dietary restrictions or who really value sustainability in the products that they buy.