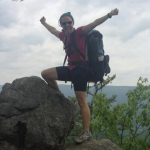 Speed Records on the Appalachian Trail

Speed records on the Appalachian Trail are often a controversial subject.  Some people love a speed hike and others think it’s against everything the trail is about.  The Appalachian Trail Conservancy doesn’t recognize speed hiking records.  There is no agency that will even authenticate a speed record and it’s based on the honor system.  That being said, with the advent of the internet and social media, news of speed records and record attempts are easier to track and follow.  While I was on my Benton MacKaye Trail thru hike back in May, we learned about Scott Jurek and his attempt to break the speed record for a supported thru hike, set by Jennifer Pharr Davis in 2011, by running the entire trail in less than 46 days, 11 hours, and 20 minutes.   This blog post will resonate with some, but maybe not so much with others.  This is my opinion about Appalachian Trail speed records.

Anyone who has asked me why I hiked the Appalachian Trail will get the same answer – I had decided I wanted to attempt it before I turned 30, but when I met Jennifer Pharr Davis in 2011 I was totally inspired to tackle it.  She was well-spoken and honest about the hardships and the triumphs that come with a thru hike.  At the time she held the women’s supported speed record and that summer was training to take on the overall speed record.  I was awestruck.  This was also the first time I’d ever heard of a speed record attempt.  The idea to me was inspiring and insane all at the same time.  I knew that hiking the AT in less than 50 days would never be something I could do, but it blew my mind that ANYONE could.  When I got home from this encounter, I started Googling about speed records and learned of all the people through the years who had done these speed hikes.  I learned names like Andrew Thompson (2005 – men’s supported in 47 days), David Horton (1991 – supported, 52 days), and Jenny Jardine (wife of Ray Jardine, unsupported, 87 days).

This brings me to the controversial part of speed hiking – some people REALLY hate it.  I mean, people get downright hostile about it.  When I would mention that meeting Davis is what set me off on my journey from Georgia to Maine the reactions would go from “that’s amazing” to “she’s an idiot!”  Some people feel that the Appalachian Trail isn’t about the miles, it’s about the smiles and the only reason you’re going to smile is if you’re hiking slower and taking the more traditional 5-6 months to finish the trail.  In my opinion, you can smile regardless of how fast you go.  When I began my thru hike I was in excellent shape – hiking 20 mile days before I left Georgia was normal.  I made it to Fontana in 11 days and got through the Smokies in 3.5.  I was often told “slow down, you’re not even enjoying yourself!”  The truth is, I was enjoying myself!  When I was hiking fast, I was seeing more wildlife and flowers than most people who hike in groups. Hiking fast and alone often meant animals weren’t reacting as quickly and I surprised a bear and a boar in those early days.  Jennifer Pharr Davis even recounted in her book that she saw more bears on her 2011 speed hike than she had on her previous hikes.  So, to the people who didn’t like how I was hiking the Appalachian Trail I often found myself repeating the most popular trail mantra to them – Hike Your Own Hike!

Anyone who hikes the entire Appalachian Trail gets respect from me.  When I was working in a hostel in Maine in 2013 I met section hikers finishing their 20-year treks, thru hikers who started in January, flip floppers, northbounders, southbounders, and yellow blazers galore.  I met Matt Kirk and went total fan girl on him at the bus station because I HAD to know if he was going for a speed record (he was, and he set it!).  To me, every single person who hikes the Appalachian Trail has a story and a reason for hiking and every single reason and story are important.  The Appalachian Trail is difficult – it will break your heart, it will take your breath away, and will present new challenges every day.  Anyone who takes the time to do the whole trail, in whatever method they chose, is worthy of respect.