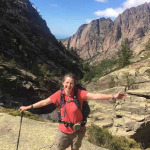 The Te Araroa – A Baptism of Sun, Sand, Mud, and Roads

It has been almost two weeks since I started the Te Araroa Trail in New Zealand. Before this, I had done many trails one to two weeks in length, but this is my first long thru-hike and I liken it to moving from a swimming in a pool to swimming in the ocean. Fun and enjoyable, but then an unexpected big wave comes, tosses you about and you come up spluttering thinking, “What just happened!”

The first wave comes in the form of getting to the start of the track. If you are coming from overseas, most people fly into Auckland and then catch a bus to Kaitaia but this is still approximately 100 miles south of the Northern Terminus. From here the options are hitching (which can be hit and miss) or catch a lift with a tour bus or trail angel (both cost a pretty penny). I chose the trail angel to remove the unknown of hitching. One couple I met hitched from Auckland. It took them nine hitches and their final hitch was with the trail angel I was with, after a wait of more than two hours. 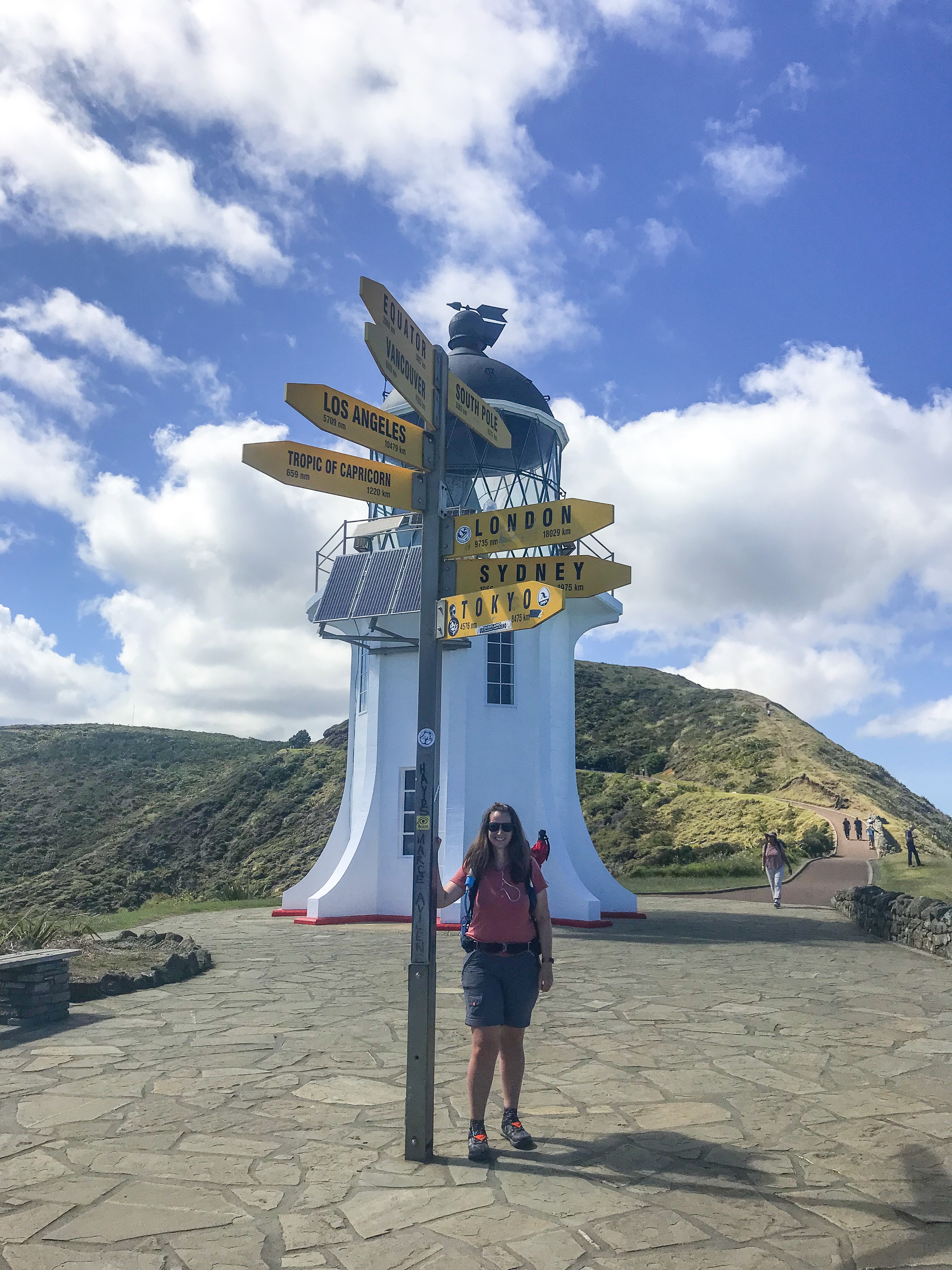 The second wave comes in the form of New Zealand’s sun. Well, actually, it is not so much the sun, but the fact that the ozone layer is thinner in that part of the world and consequently blocks less of those harmful UV rays. I met people who applied sunscreen at the recommended three to four hours and still looked like lobsters. I, however, am singing the praises of my umbrella, both for protection from the sun and rain. It is bright red and I’m sure the catwalks of Europe would shun my fashion, but I love it. 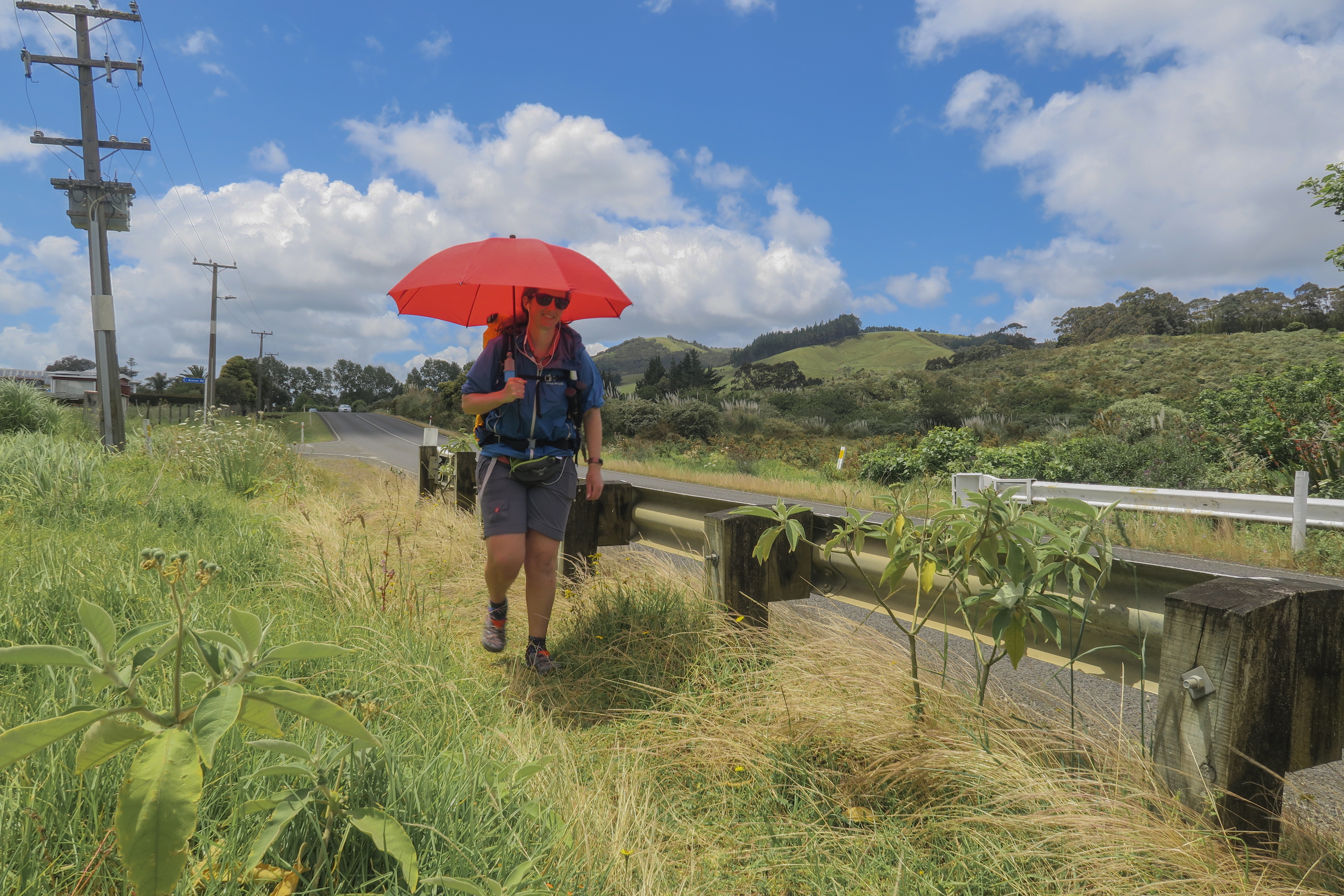 The third wave is four days of beach walking to start the track. This sounds idyllic, until you realize that walking on hard-packed sand is the same as walking on concrete, resulting in monster blisters for many. I rarely get blisters, but even I got a little one by the fourth day. There is also nothing to shade you from the sun and nothing to block the wind. Consequently, by day two the weather had turned and I was no longer walking in the burning sun, but in wind that blew sand into everything and whipped rain sideways at me. 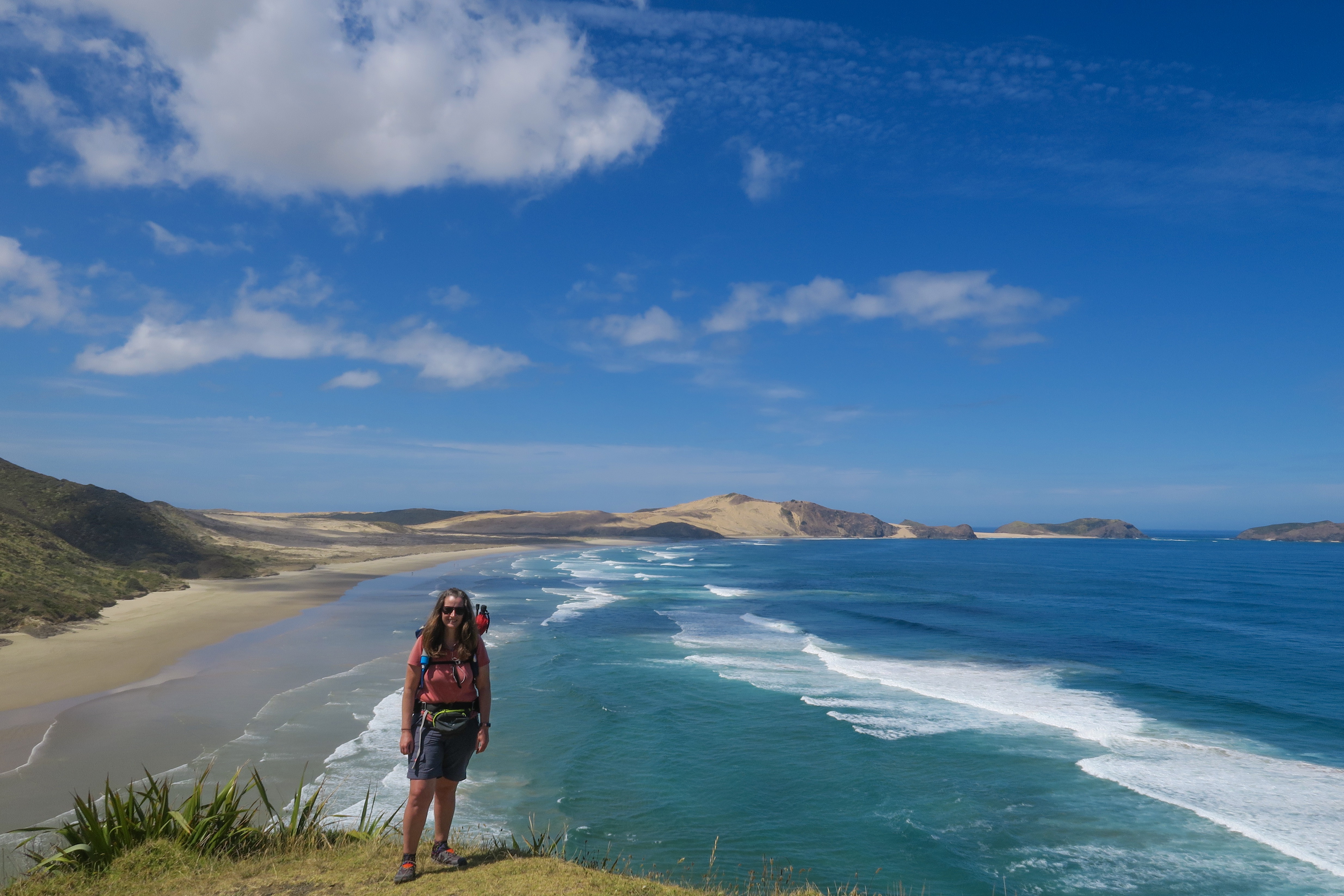 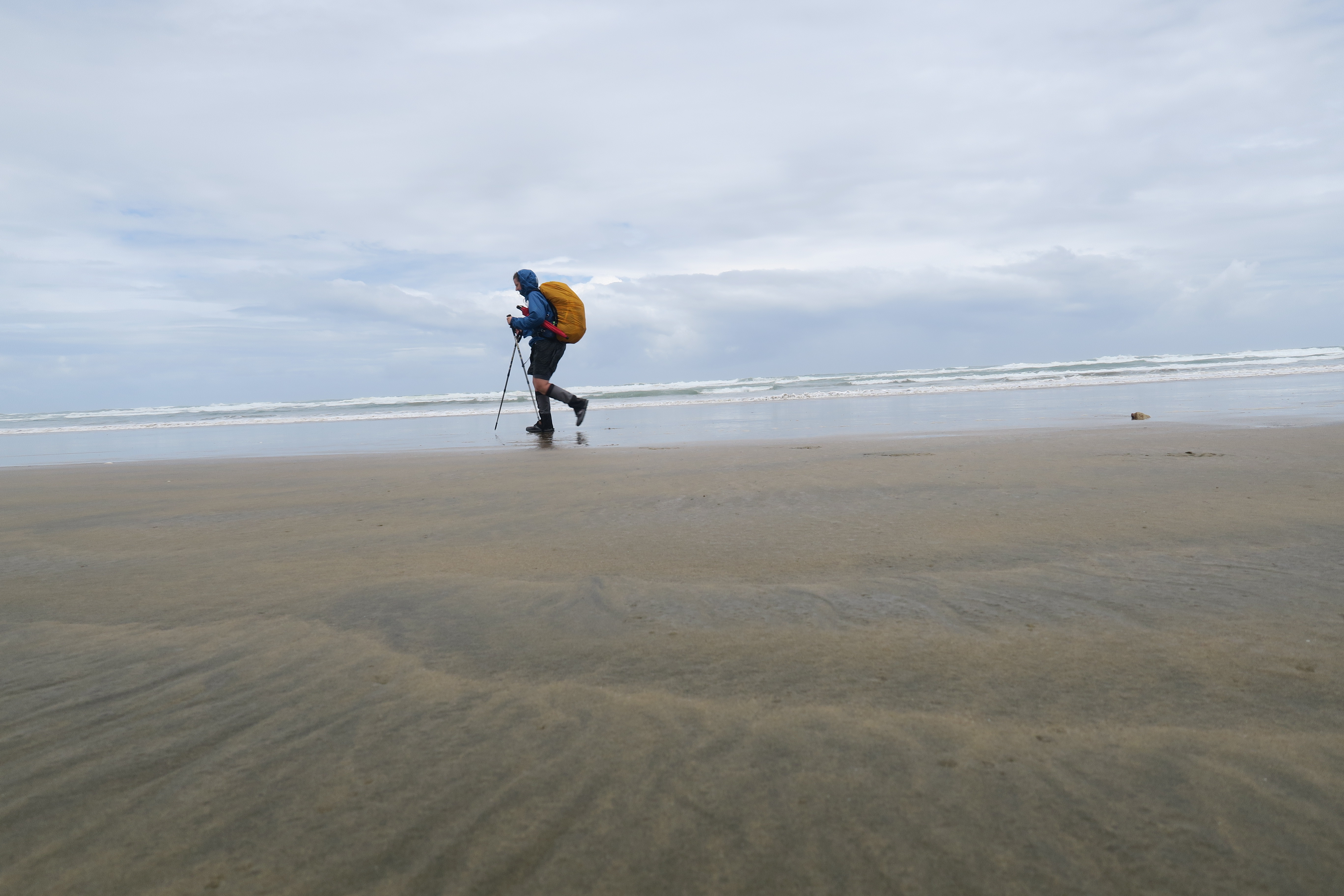 The fourth wave is the muddy forest of death. Once off the beach it is into the Northland Forests. Raetea Forest is only 16 kilomters in length between campsites (ten miles) but it was reported to take 12 hours to complete. Words can not describe it. However, let me try. Knee-deep mud that will suck your shoe off or leave you straining to get your foot/leg out to take the next step. Track so steep, you stand at the bottom wondering where to place your foot so that you don’t slide back down, or stand at the top wondering where to place your foot so that it doesn’t slip out from under you to your muddy death two meters below. The track took me just over 11 hours to complete with few breaks, as there is simply nowhere to sit down and rest. Unless you want to sit in the mud, which I did a few times. Not by choice, but unwillingly, as I slide like Bambi on ice into the mud and onto my butt. Despite it all, it was fun (type two fun) and the few places with breaks in the trees provided beautiful views. 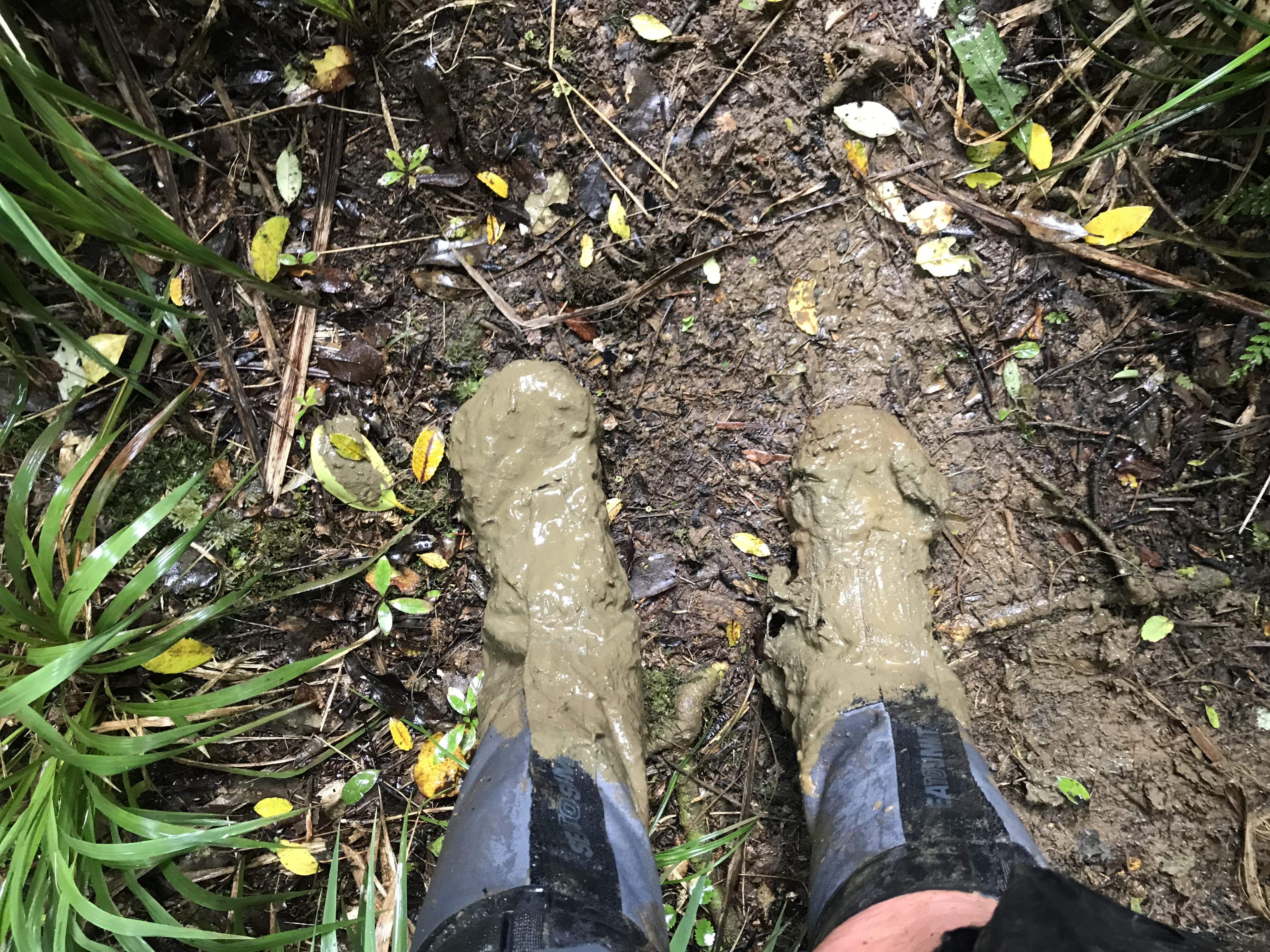 This was one of the better sections of mud; it got deeper and thicker.

The fifth wave is long days between campsites. The Te Araroa passes through a lot of private land and roads where camping is not permitted. It also goes through a lot of areas in which camping is unavailable due to the density of the forest or due to needing to protect the animals or trees in that area. This means that there is no easing into this trail with shorter days until you get your trail legs; it is 20 miles days straight out of the gate. At the moment 15 miles is my sweet spot. After that my feet start screaming at me, “Why, oh why, are you doing this to us?” 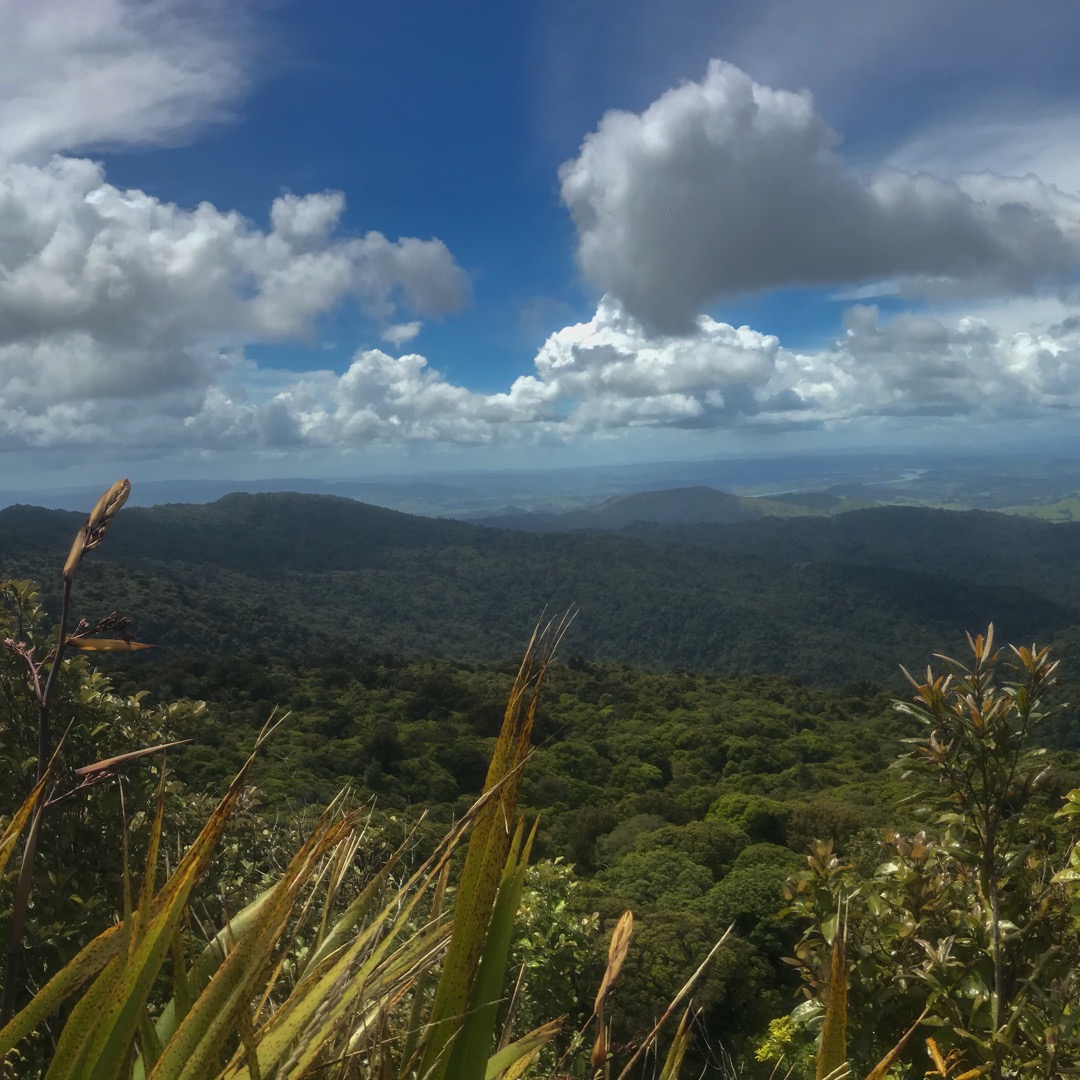 It may sound like this trail is straight out of a horror movie, but that is far from the truth. New Zealand is beautiful and the views I have been rewarded with have been phenomenal. Yet, it is not a trail you simply walk on until your next resupply. At this point imagine the Boromir meme with the words, “One does not simply walk the Te Araroa.” It has its challenges that your average long trail does not, but as one hiker I met said, “I’d rather be here than in a cubicle working.” 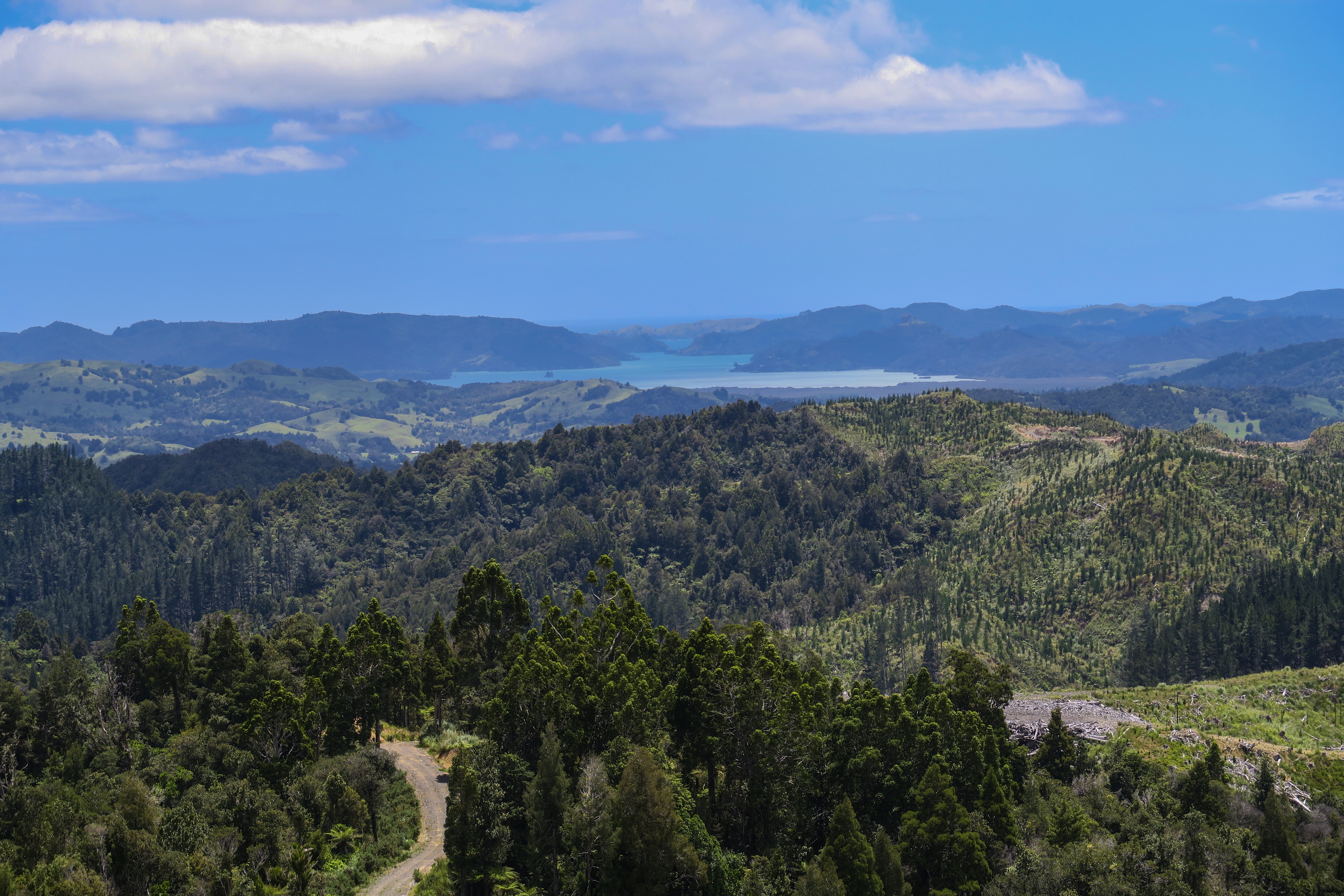 “Well, come on feet” - Sarah from the 80’s movie The Labyrinth. This is a line that I’m pretty sure I am going to be saying to my feet everyday for the next year as I attempt to hike New Zealands Te Araroa 18/19 and the PCT in 2019. Enjoy the highlights on the Trek or follow me at www.uptothehills.com