The Colorado Trail Takes My Breath Away!

I flew to Denver on July 12 and stayed withan old family friend for a few days to give myself a chance to adjust to the altitude.  I had a lot of fun exploring Denver, shopped at REI and a couple of local grocery stores to stock my food bag.  My friend took me out to Waterton Canyon to explore the beginning of the trail on Sunday.  I was pumped!

I took an Uber to Waterton Canyon the following week.  While I flew down the initial road walk, I slowed to a crawl after the trail left the road and headed uphill, but still managed over ten the the first day. 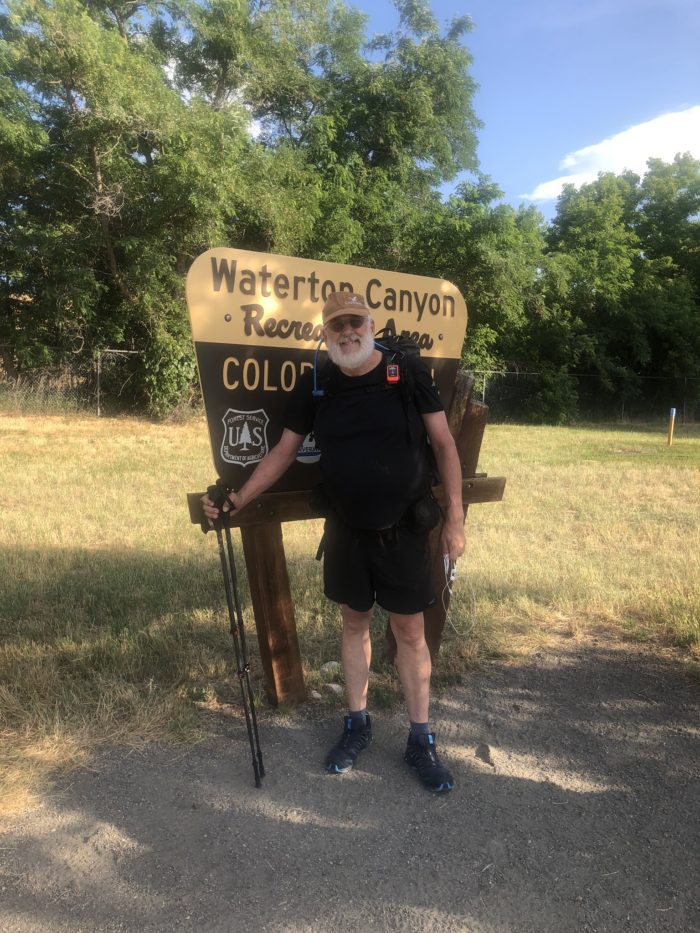 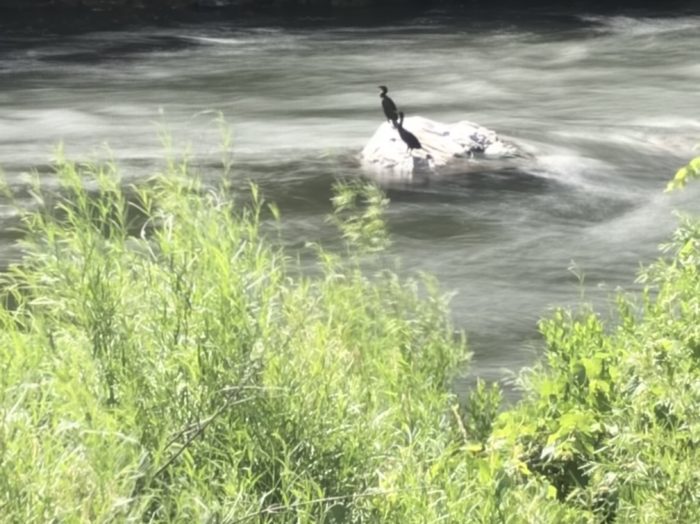 Bird chilling on a rock in the South Fork of the Platte River.

The next morning I hiked over the hump and down to the Platte, getting there about noon.  It was hot.  I drank at least two liters with my lunch and loaded up with a tad over five liters for the dry patch ahead of me.  That’s 11 pounds of water. With my full food bag, I didn’t really want carry more than that.  Turned out that was a mistake.

The next morning I had a painfully dry seven miles to get to the fire station at Buffalo Creek.  It had to be over 100 degrees and shade was pretty hard to come by.  A couple of hikers gave me water they could spare, but still I was a mess when I got there.  My tongue felt like a shingle and I hadn’t been able to swallow any food since morning.  There were a bunch of us, just sitting the shade of the firehouse rehydrating.  My phone was fried.  Who knew phones could get heat stroke?   I decided it was best to go back to Denver to drink Gatorade for a couple of days and take care my phone. 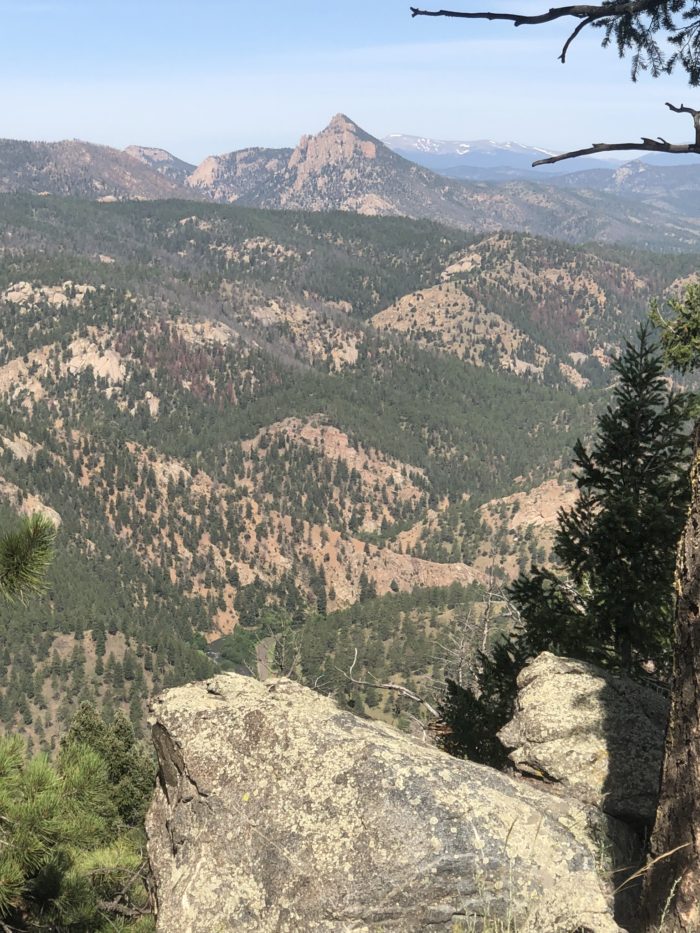 The stark beauty of the dry patch between the Platte and the fire station in Buffalo Creek.

After taking care of business in Denver, I took a bus to Fairplay on Monday and made it back to the trail on Tuesday morning.  At the dinner in Fairplay, I asked my waitress if she knew anybody who could take me to the trail in the morning.  She told me she was going to Denver and could take me.  The next morning, we hashed out a business plan for her shuttle service.  Hope she follows through on this.

As I walked up from Kenosha Pass, I appreciated the cooler temperatures in the higher altitude. 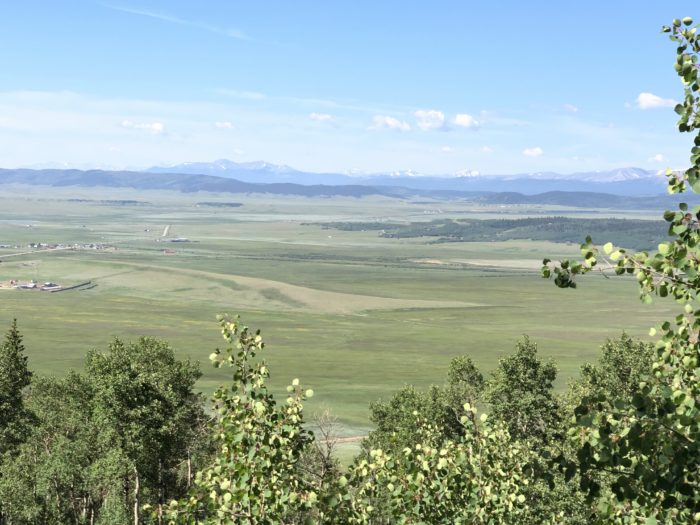 Views on the way up from Kenosha Pass. 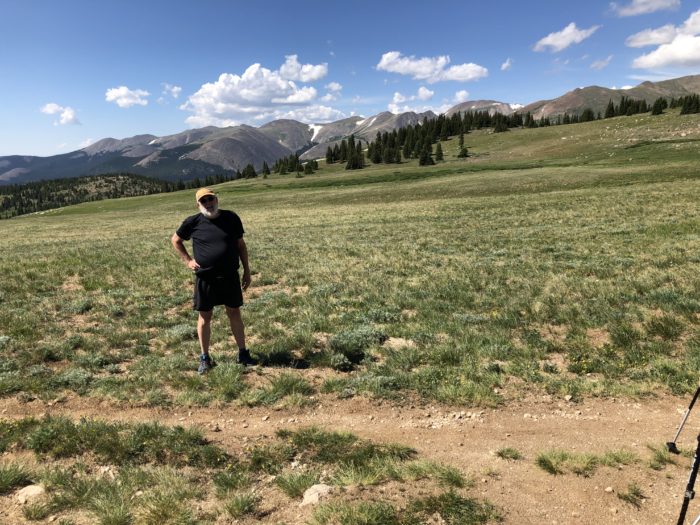 As I was walking toward Breckenridge, I ran into one of the guys who rehydrated at fire station with me.  He was going into Breckenridge.  I really hadn’t planned on it, but when there’s a bus stop at the road crossing, it seems like a town visit should be required and changed my mind.  On the way down to the road I saw my first moose that wasn’t lying with his feet up in the back of someone’s truck.  Moose are notoriously cranky and I tried get him to move, but he seemed perfectly happy grazing six feet from the trail.  I anxiously tiptoed by, but he barely lifted his head to check me out as I passed. 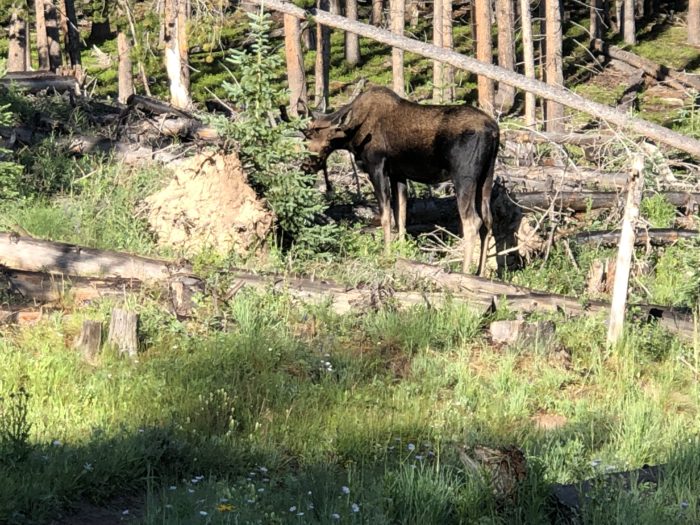 Close encounters with a moose. Loved the sunlight shining on the felt on his antlers.

I settled into my hotel that night expecting a restful night.  Instead I flopped around all night like a freshly caught trout.  After a little research, I found that insomnia is one of the symptoms of altitude sickness.  Given this, I decided to take a zero rather than walking all day without any sleep.  I went to the grocery store and loaded up on melatonin and it seemed to help the next night.

Took the bus back to the trail.  My body was adjusting to the rhythm of the trail, but I live 100 feet above sea level.  Long, slow ascents, then down the other side.  This is what I signed up for, but it was hard going.  I can’t control how far I walk; I can only control how long.  For me, setting mileage goals puts me in an unproductive state of mind.  If I don’t make my goal, it feels like a failure.  Mileage goals are more wishes than goals.  I have a theory that the human race can be divided into uphill folks who race uphill and downhill people who eat miles going downhill.  I think it may be tied up with hammies and quads.  I’m definitely a downhill person. 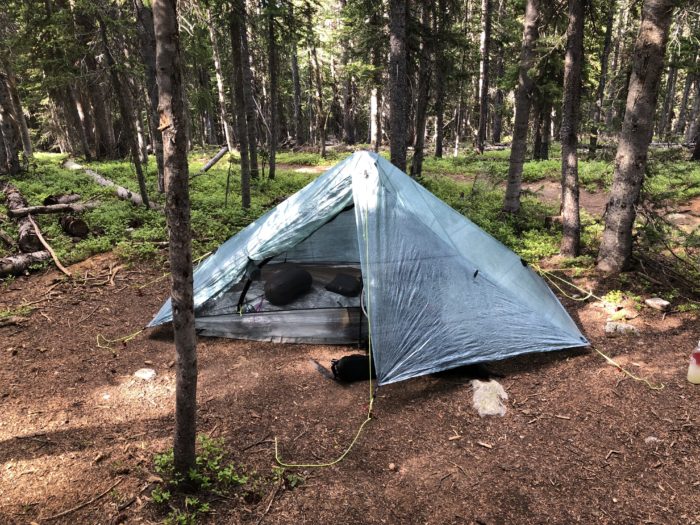 My Zpacks Plexamid. Home on the Colorado Trail. 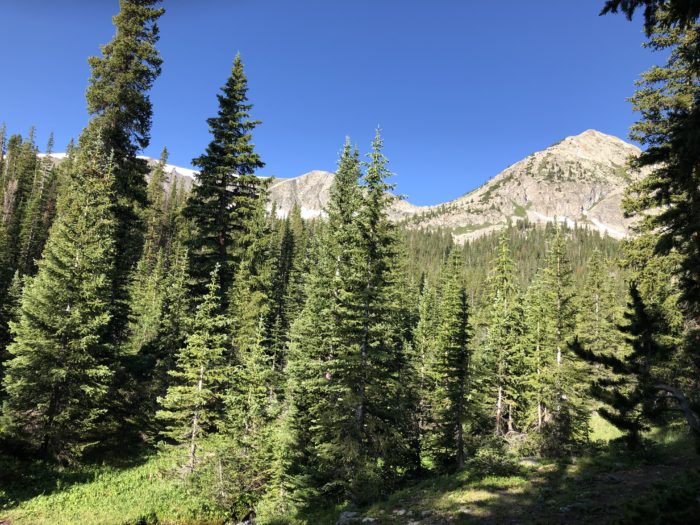 The Colorado Trail is beautiful. It literally takes my breath away! 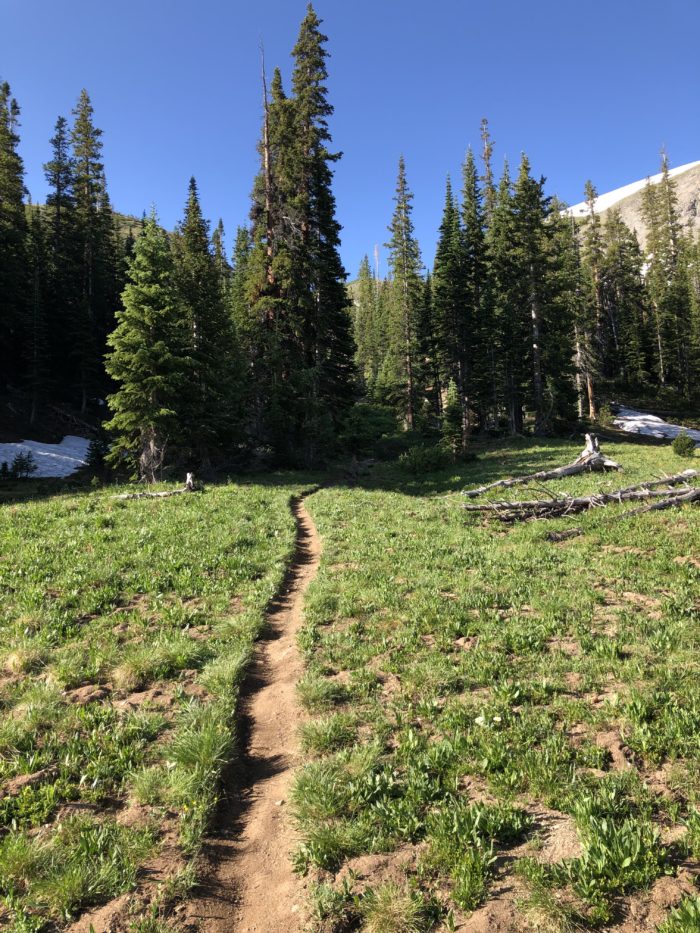 The trail was diverted through the Copper Mountain Resort.  The detour wasn’t marked very well and I lost it near the office.  Could diversion be a part of the resort’s business plan?  It was was about 5 p.m. so I opted for another night in town.  The burger and onion rings were spectacular!  As I showered I found that my neck had a pretty bad sunburn.  Red neck doesn’t come close to describing it!  The SPF 30 wasn’t getting it done, so I had to linger in town the next morning until I could something a bit beefier.

After a late start I headed uphill and camped near a small stream near the junction to the trail to Janet’s Cabin.  The cabin is  just short of 12,000 feet.  Can’t imagine the effort it took to build it and it must have cost a pile of money. 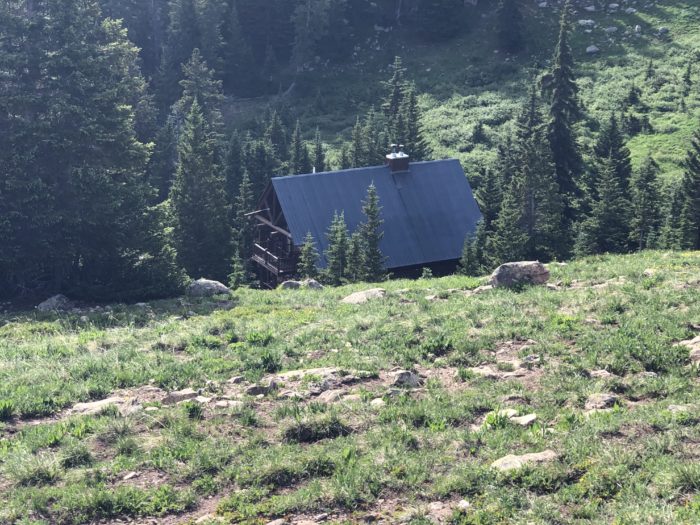 The roof of Janet’s Cabin. I was expecting a ruin. It’s certainly not that! 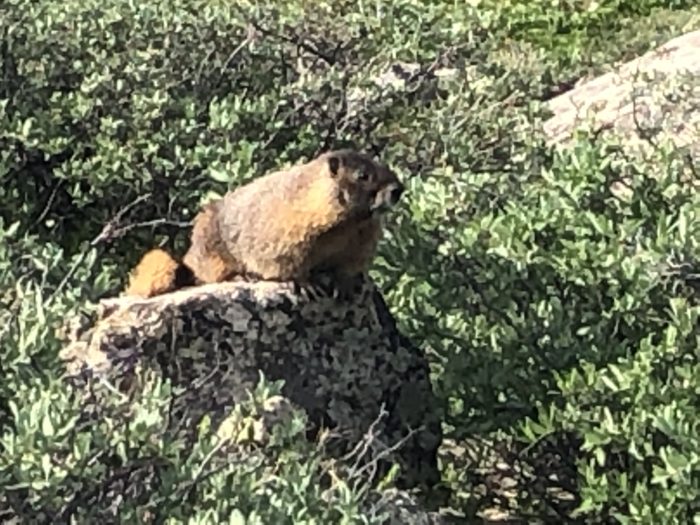 A couple of marmots were sunning and watching me walk toward the pass. 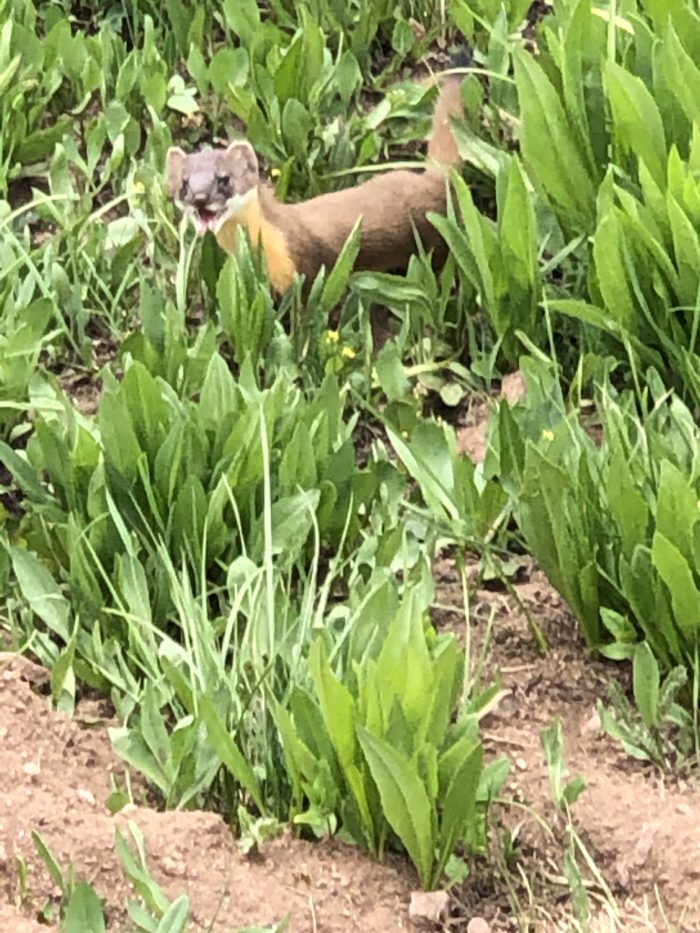 This little dude (I think he’s a a pine martin) cracked me up.

The stretch from Searle Pass to Kokomo Pass was just incredible.  This may have been my favorite part of the hike.  The trail between the two is all above the treeline at around 12,000 feet. 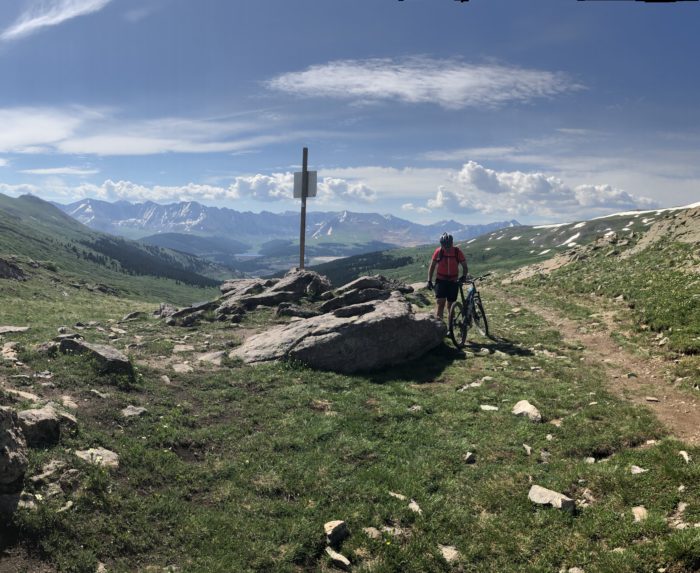 A cyclist enjoying the view at Searle Pass. Going into this hike I was a little nervous about sharing the trail with them, but was actually not a problem. 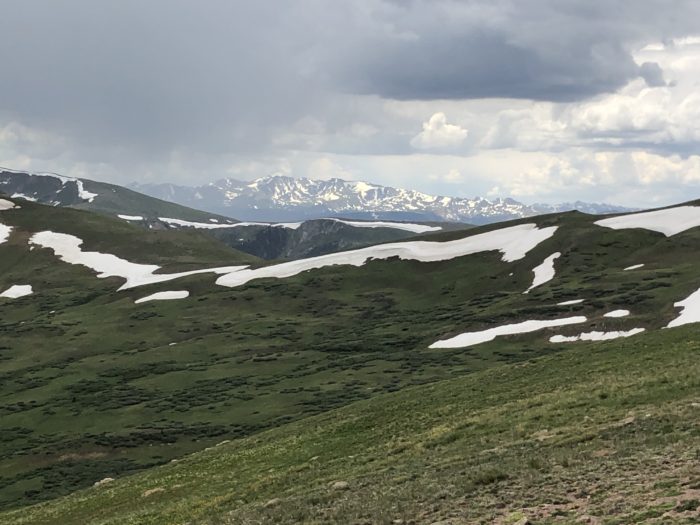 I walked down from Kokomo Pass in a light rain and camped near the east fork of the Eagle River.  Not really my favorite campsite of all time, but it left an easy walk into Leadville the next day. We have friends who work at High Mountain Institute outside Leadville.  One of them picked me up at the pass. They loaned me a car to go into town to resupply.  One of the new teachers there had taught where my wife and I worked in Brooklyn.  We hadn’t known each other because we were in different divisions, but we had a lot of friends in common.  Any hiker trash readers interested in a career in education should check this place out.  Students take some extended trips around Leadville during both fall and winter terms.  Think of the skills you would need to pull something like that off!

Instead of going to Tennessee Pass, I headed back to the trail from a trailhead near the campus. 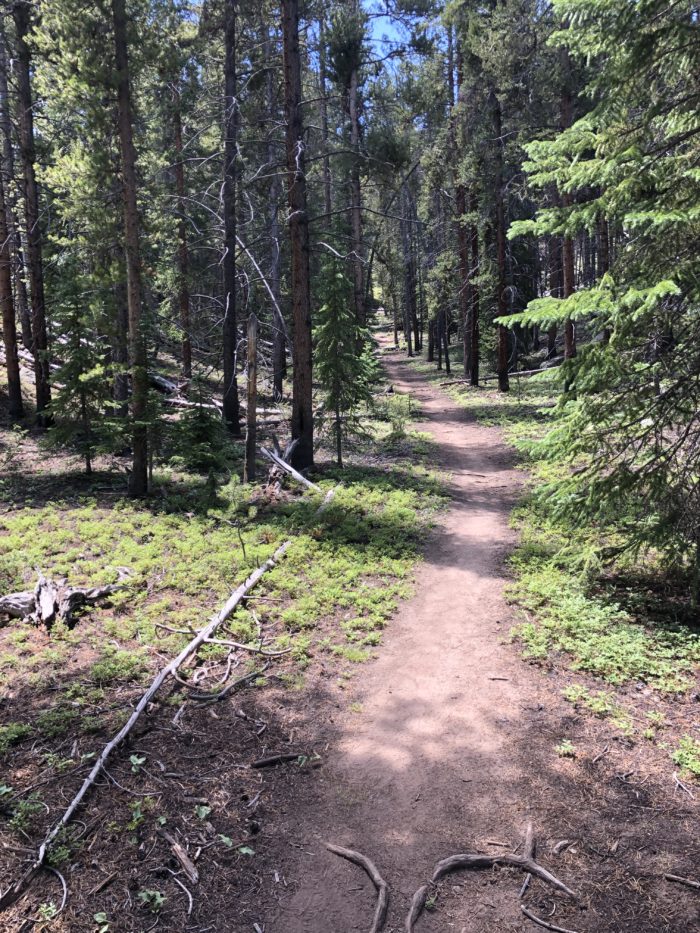 The trail back to the Colorado Trail from near HMI. 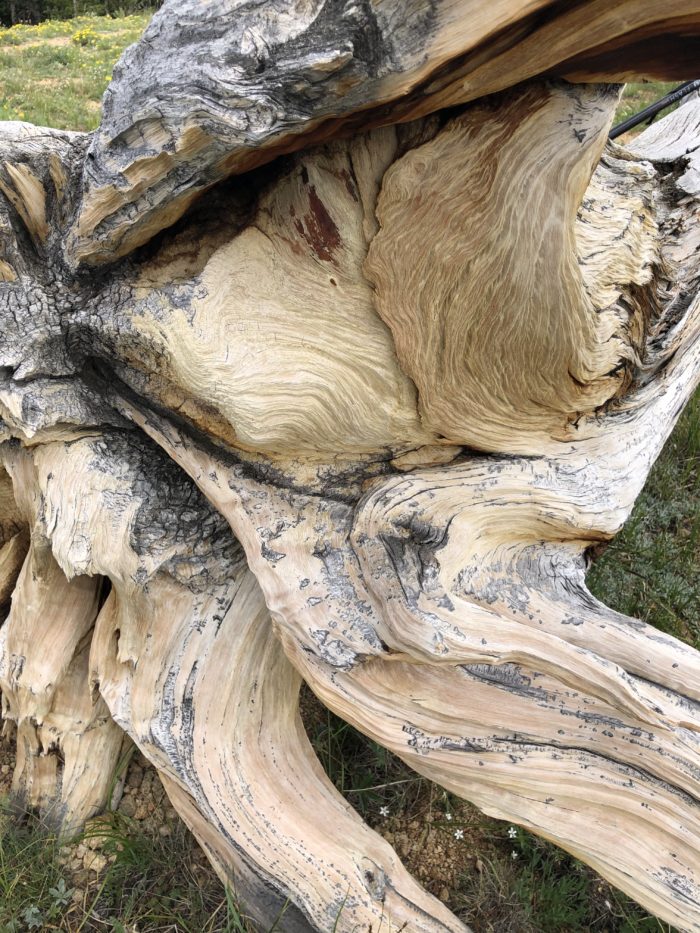 The trail was teaming with day hikers out to bag Mount Massive and/or Mount Elbert.  Oh, to be young again!  At present such diversions aren’t a part of my energy budget.

Descriptions of Punky’s Food Truck in Twin Lakes induced me to walk down for a burger.  I went stoveless this trip.  I ate flavored tuna or summer sausage and cheese rolled into a flour tortilla.  On the trail, I didn’t really miss hot food, but I was always hungry for town food.  I was intentionally hiking on a calorie deficit.  Town food helped fill this gap.  Punky’s did not disappoint.  A dozen magpies hovered around my table hoping for a handout. Or maybe I just looked like messy eater.   I crashed at the bunkroom at the Windmar Cabins outside of town.  While it took awhile to get them on the phone, when I did, they came into town and picked me up.  They are just a mile off the trail. (Their number is in Guthook).

After breakfast in the bunkroom, I walked back to trail.  I took the eastern Collegiate option this time.  What followed was a series of days where I crawled up to almost 12,000 feet, then down the other side to get into to position to do it again the next day.  I didn’t start this hike in the best condition and I wasn’t really ready for this grind.  I messaged an old high school friend who lives in Creede and had him pick me up at The Mount Princeton Hot Springs and my hike was over.  While my original plan was to fly to North Carolina, pick up my car and dogs, and drive back to Maine and then fly back to finish, this just seemed silly. 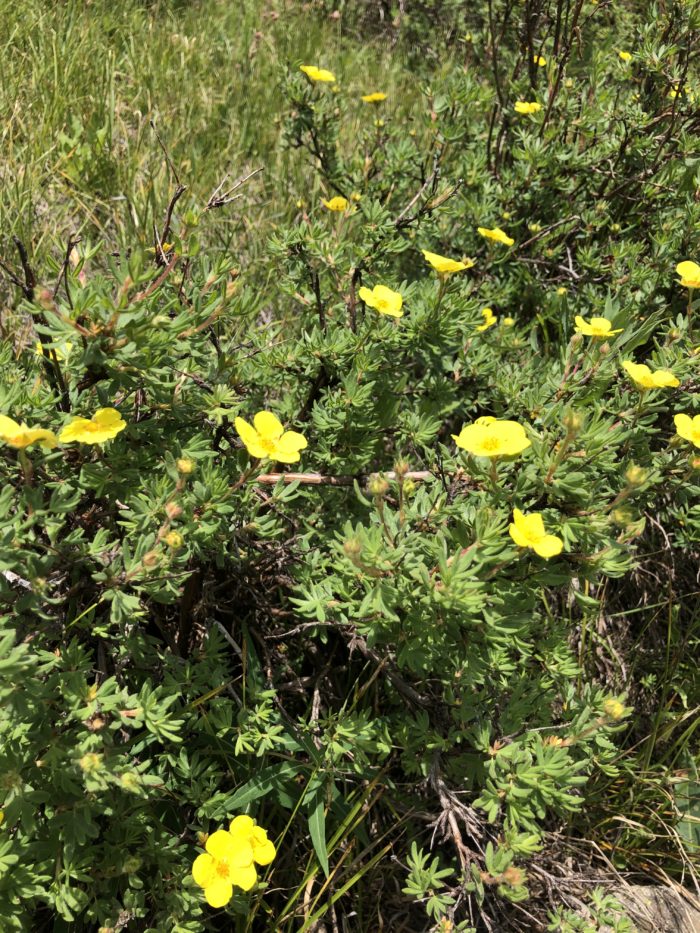 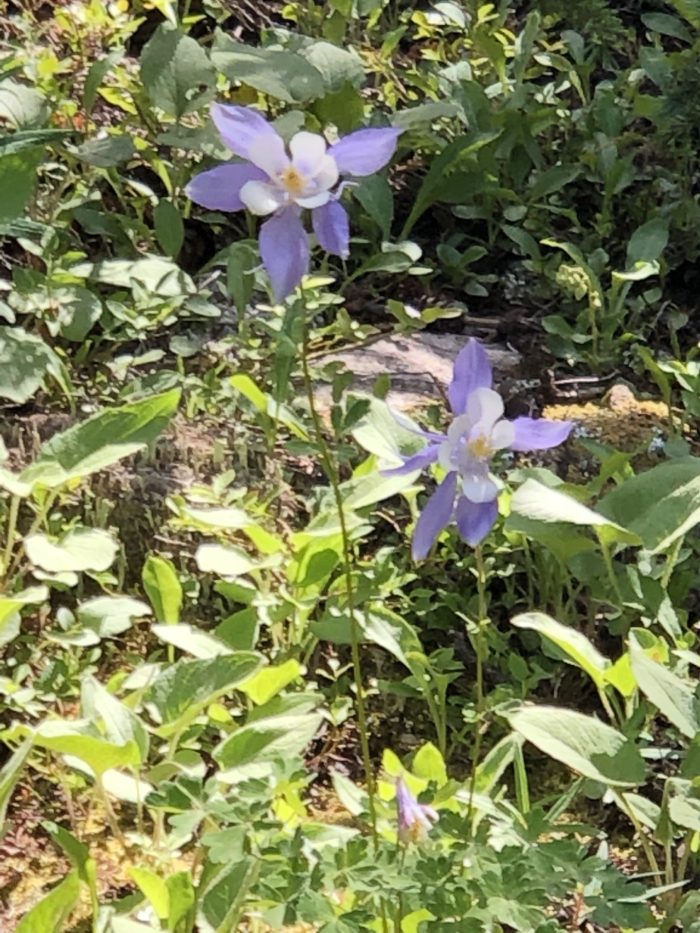 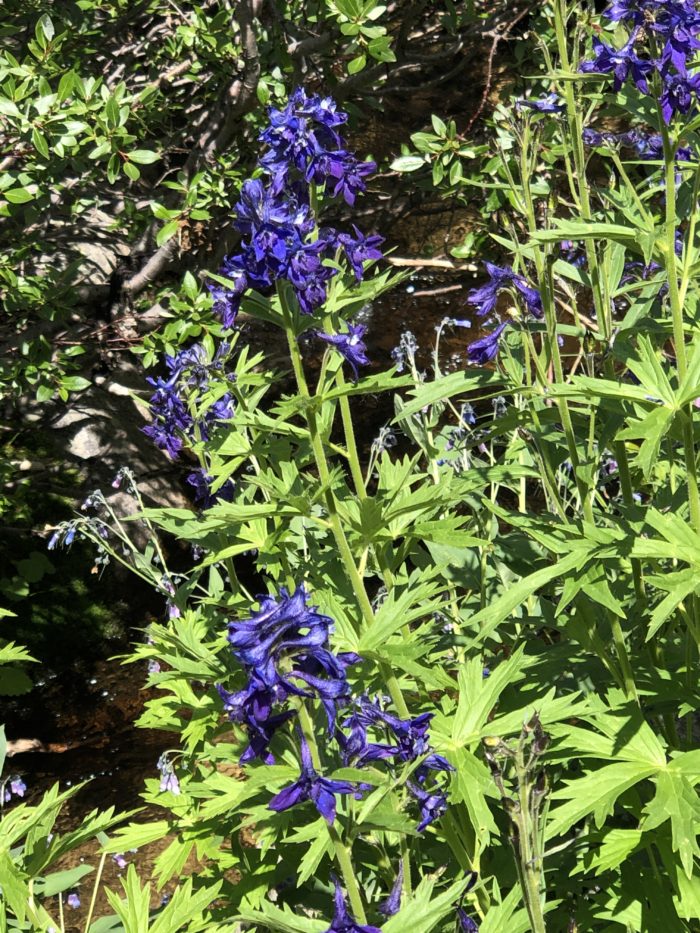 The wildflowers were everywhere this year!

With my shoulder surgery in March, it was hard to get in the physical training I usually do before a hike.  My usual approach of doing enough to get through an easy day on the trail and walking myself into shape on the trail.  The Colorado Trail demands a bit more than that. I live at about 100 feet above sea level.  It’s hard enough to adjust to the altitude and carrying an extra 20 pounds doesn’t make it any easier.  So diet and exercise are a part of the plan this off season.  I’m running four days a week and have already lost five pounds.

Spending time in Denver wasn’t really enough to get me ready for the altitude.  Reconnecting with my friend in Creede gives me a place to continue this process at 9,000 feet in the future.

When my loving relationship with the Appalachian Trail turned abusive last year, I came to Colorado looking for a trail that would treat me better.  The Colorado Trail did not disappoint.  I will be back. 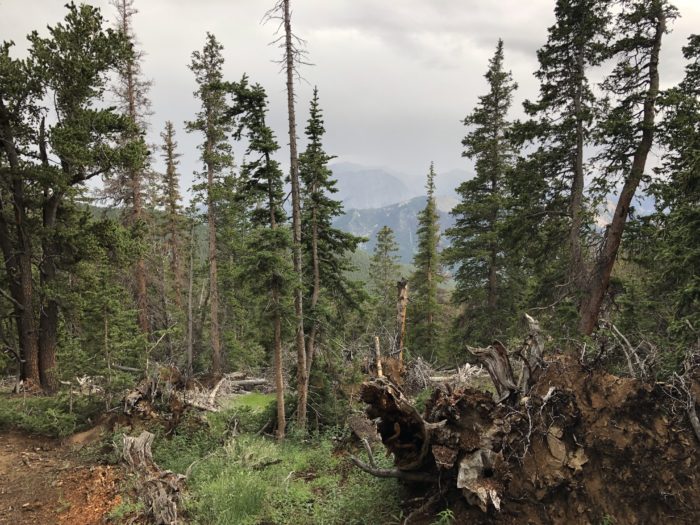