The Real Difference Between Thru-Hiking and Backpacking

In 2019, I hiked the Under-the-Rim Trail at Bryce Canyon—a spectacular 23-mile traverse of the national park. I caught a bus from one end of the park to the other to start the hike.

When I boarded the shuttle with my pack, the driver got really excited and announced to all the tourists that I was a thru-hiker. He explained how that term applied to anyone who hikes Under-the-Rim in one go. This definition seemed odd to me. Could a trail short enough to finish in one day really be a thru-hike? I didn’t think so, but was that just my AT snobbishness coming out?

There are many interpretations of the term “thru-hiker.” Most agree that to be a thru-hiker, you must complete an end-to-end trail in one go. Many believe it has to be a long-distance trail (whatever that means), some think you have to follow a continuous footpath with no long breaks or changes in direction, and some disagree with all of the above.

It’s all very nebulous, reaching a level of abstraction that I struggle to care about very much. I’ve come to accept that everyone’s definition of a thru-hike will be a little different and that that’s OK.

READ NEXT – What Is the Definition of a Thru-Hike?

But what’s always fascinated me are the behavioral differences between thru-hikers and the broader population of backpackers. To me, the biggest distinction between the two groups is all about the vibe rather than some technical definition.

Disclaimer: I’m about to paint with a very broad brush. I hope you can still take something from this post, or at least have fun reading it, even if all of the below doesn’t quite match your experience. 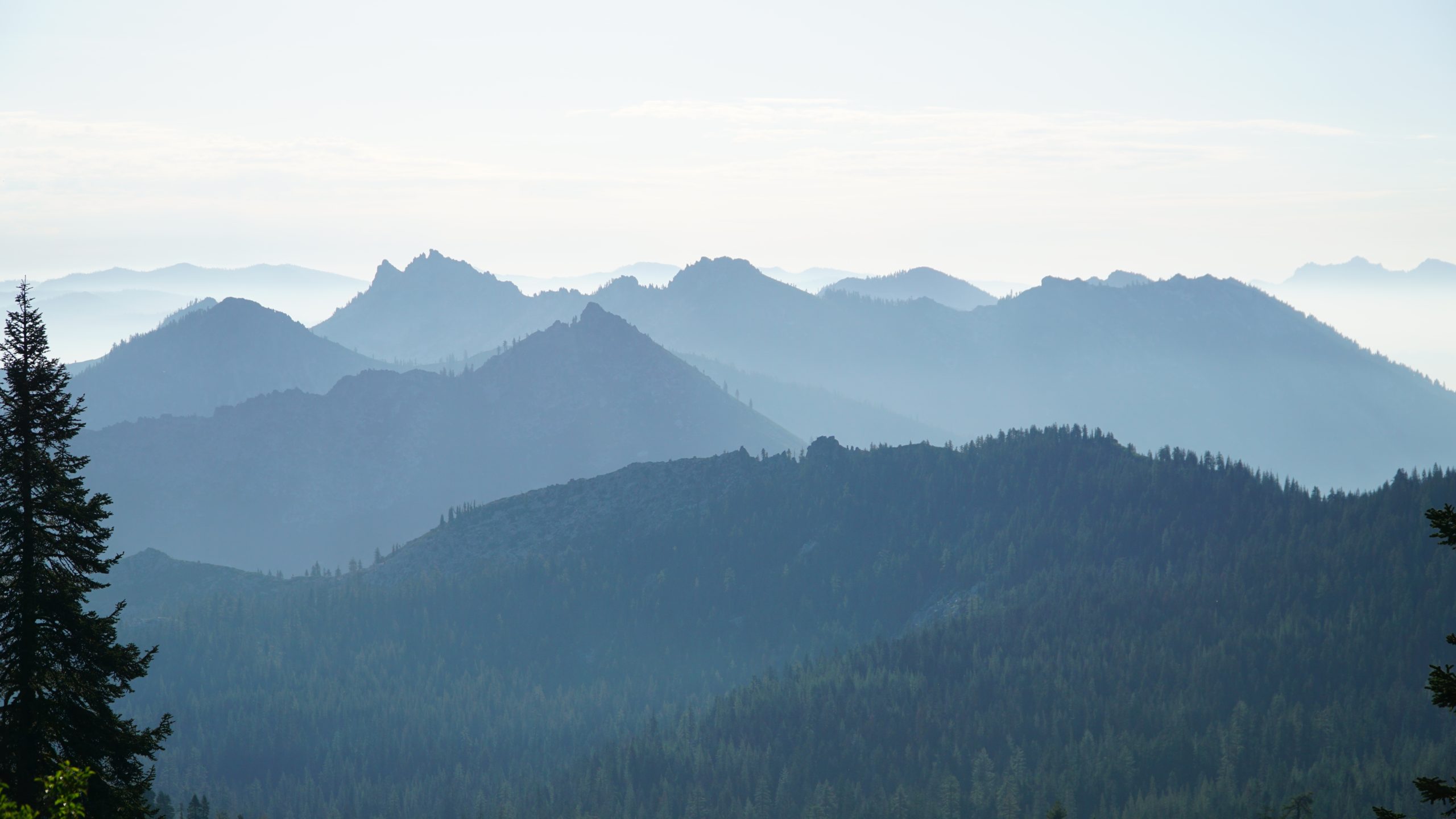 Thru-Hiking vs Backpacking: What’s the Difference?

Backpackers know how to plan and pack for a trip. Not all thru-hikers do.

Several hours into my first post-AT backpacking trip, I discovered that I was still an idiot, a real idiot, because I hadn’t bothered to test my old Sawyer Squeeze before setting out. As a result, it wasn’t until I was already on the trail that I realized it had locked up completely. Luckily, a section hiker with the forethought to carry a spare filter rescued me.

My growing sense of incompetence was reinforced several weeks later on another trail when I discovered on Night One that I’d packed a pot and fuel but no stove. I had to, mortifyingly, borrow one from a group of backpackers to whom I’d earlier boasted about my extensive hiking experience.

Even worse, I was already an uninvited guest crashing their permitted campsite because I’d fallen short of my own goal. So that was fun.

Thru-hikers assemble their gear once at the beginning of the trip and never think about it again. Sure, you’ll physically repack after a pack explosion, and occasionally you’ll pare down or swap some stuff, but building a packing list from the ground up is generally a one-time thing.

Thru-hikers don’t get much practice in this area, so it’s really easy to mess up and forget something the next time you go backpacking post-thru, especially if you add a healthy dose of overconfidence to the mix.

And most of us strive not to overthink our itinerary when starting a long hike. With so many variables, our plans are almost guaranteed to go awry. Why waste precious energy on logistics that are doomed to fall apart? Detailed trip planning is another skill thru-hikers rarely use that comes second nature to most backpackers.

Backpackers tend to care more about where they’re camping at night, whereas thru-hikers prioritize miles. 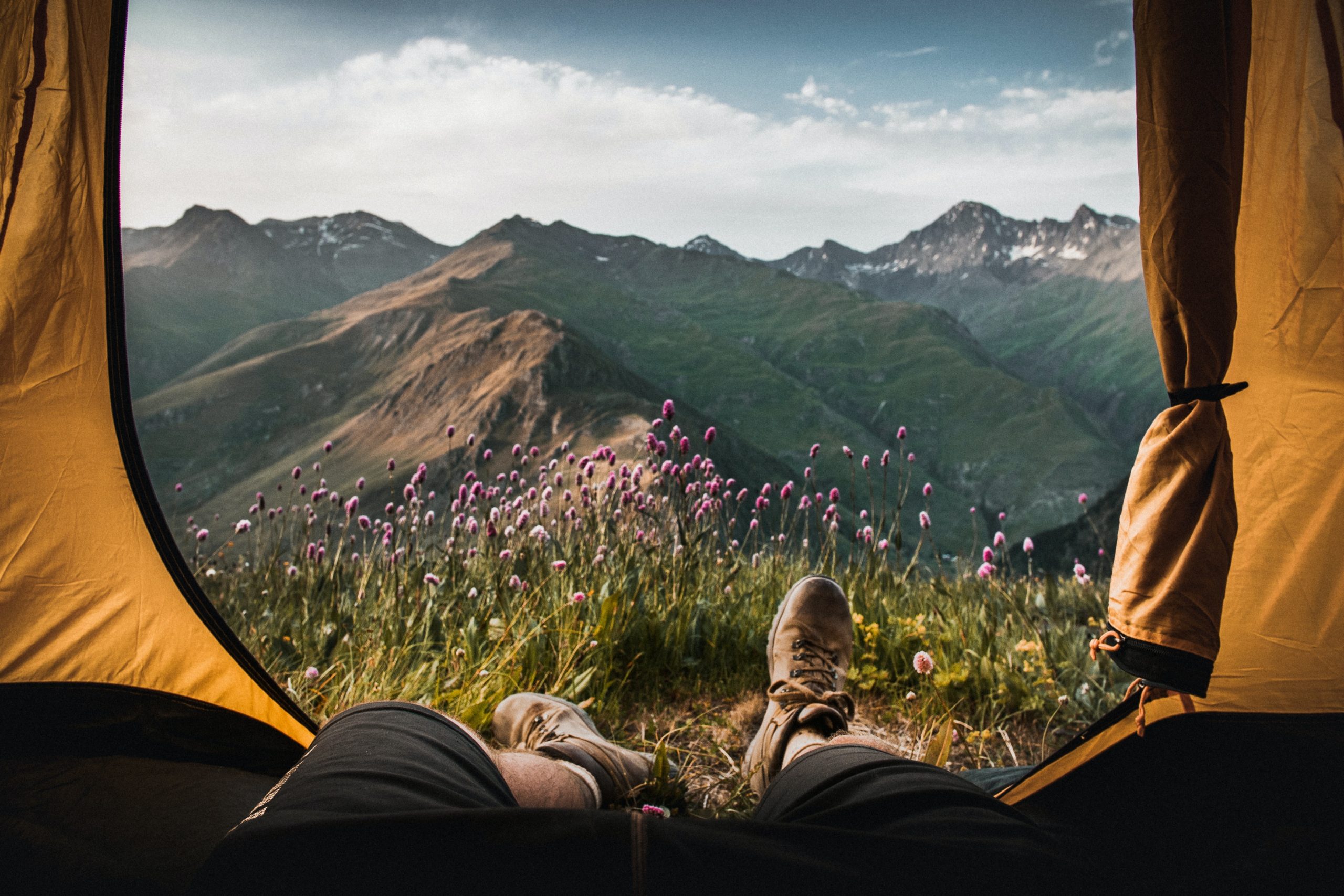 Photo via Dominic Jirovsky on Unsplash.

When hiking a long distance, I’m looking to camp someplace at least 20 miles further than where I started and ideally at least semi-flat. In a perfect world, it would be near running water and far from any noisy roads. Occasionally, I’ll aim to camp someplace scenic or unique, but that isn’t my top priority most of the time. I’m not spending much time at camp, and when I’m there, I’m too tired to do much besides eat and sleep. My criteria for what makes a good campsite are tailored to convenience and forward progress.

Backpackers who are traveling shorter distances overall find it logistically easier to plan their days in more detail. Lacking long-distance trail legs, they may opt for shorter days with more time in camp.

Moreover, because they’re out for a shorter time, they tend to be more invested in making every moment count, including those spent at camp. And why shouldn’t they? Camp is amazing. If you have the time, why not spend an afternoon reclining by a gorgeous lake or exploring your beautiful surroundings? Comfort is still important, but backpackers ask more of their chosen stopping point than just a place to hang their pack at the end of the day.

Backpackers are far more likely to end their day around a campfire sipping drinks and swapping stories late into the night. Few long-distance hikers muster the energy to build more than a few fires during their hike, if that. (I’m assuming we’re talking about a trail where fires are even safe or allowed.)

Hiker midnight is 9 p.m. for thru-hikers (or 7 p.m. in my case). And before laying down, there are plenty of chores and a whole lot of eating that need to get done. Plus, after consecutive weeks on trail, the novelty wears off. The fire becomes just another chore rather than a fun nightly tradition, and staying up late becomes far less appealing than a good night’s sleep. 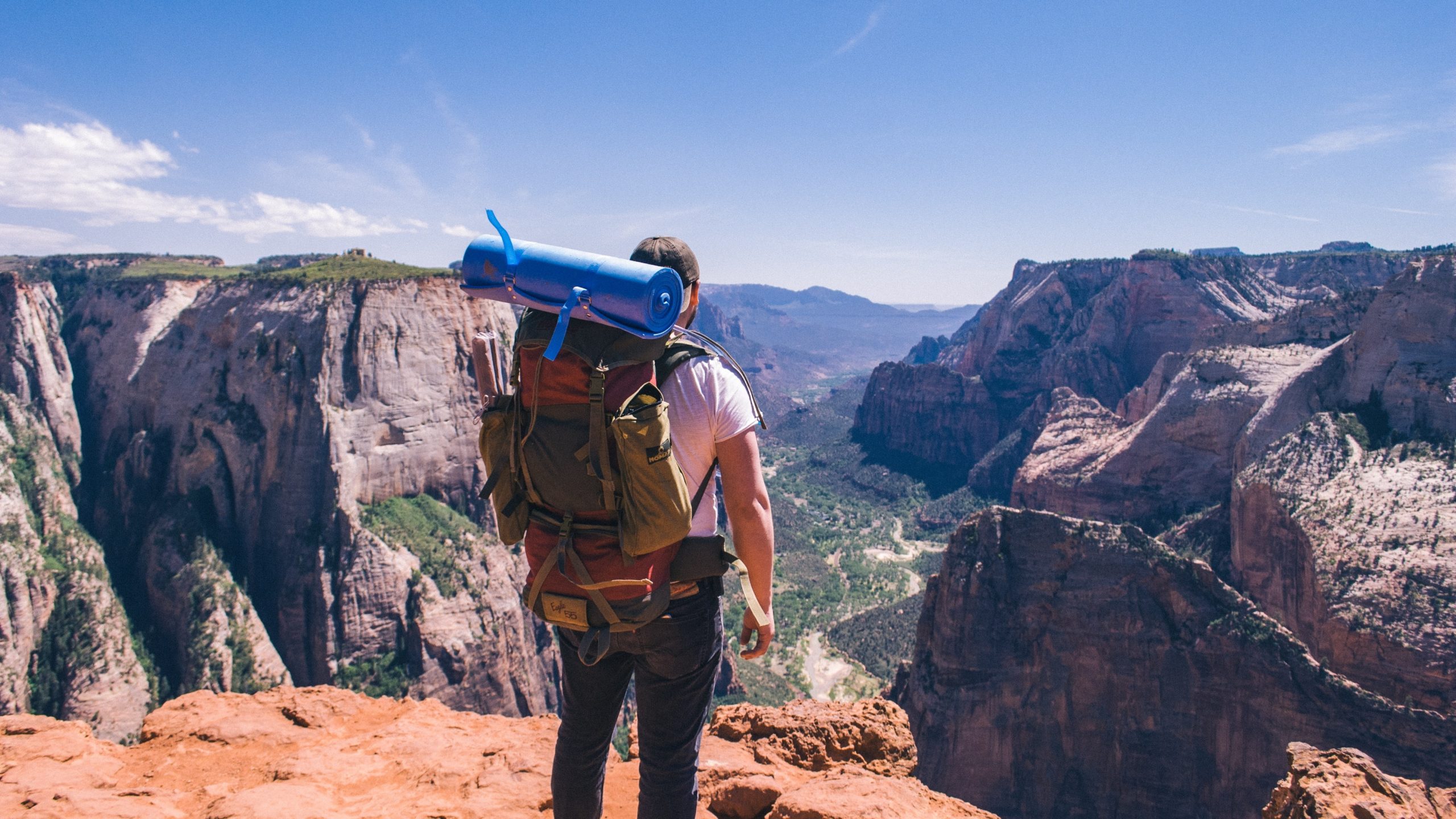 Photo by Presley Roozenburg on Unsplash.

This one really surprised me back before I knew much of anything about thru-hiking. I always assumed thru-hikers would bring more comforts to simulate some of the trappings of civilized life. By the same token, I figured backpackers on short trips could afford to spend just a few days in relative austerity.

Of course, the exact opposite is true. Because they’re out for longer, thru-hikers tend to give up on the idea of comfort. The biggest comfort they can realistically manage is less weight on their backs day in and day out, so they sacrifice everyday luxuries like books and chairs and toiletries to lower their base weight.

In contrast, backpackers can afford to carry a heavy pack for a few days. And again, since their trips are relatively short, they want to pack in as much fun as possible. They therefore may want to bring more luxuries and live it up while they can. 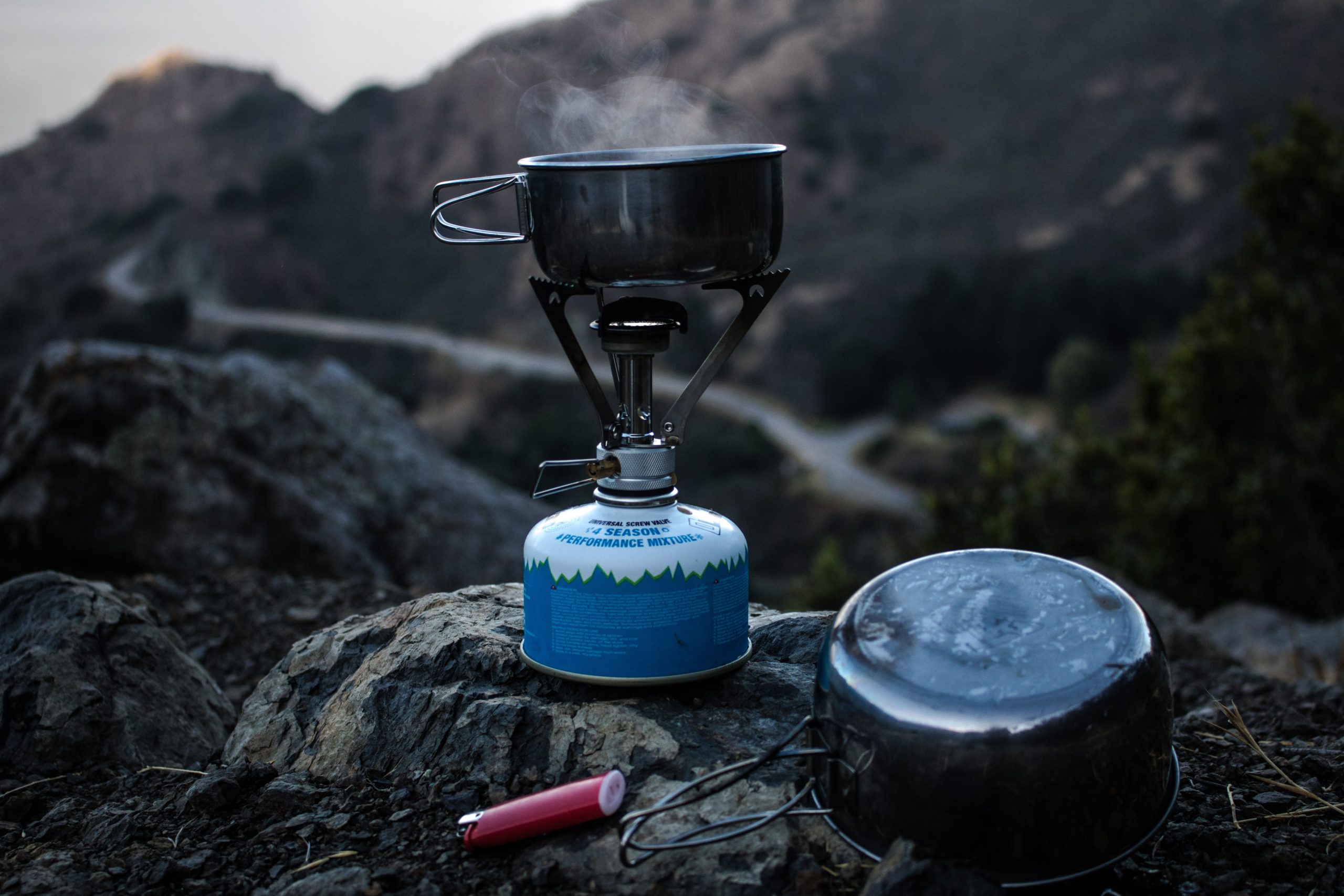 Photo by Sage Friedman on Unsplash.

Similarly, backpackers are more likely to eat fancy foods than thru-hikers, who largely subsist on gas station snacks and “ram-bombs” and the like. Personally, if “cooking” dinner involves more work than pouring mystery powder into a pot of boiling water, it’s too involved for me. However, many backpackers will go backcountry-gourmet at least one night of their trip. This may involve spices and olive oil in tiny containers, fresh produce, and (gasp) multi-step recipes. At the very least, they’re more likely to opt for expensive freeze-dried backpacking meals most nights.

Don’t get me wrong. I’d very much like to eat the lovely meals I often see weekenders devouring. But when you’re long on calorie needs and short on time, elaborate recipes don’t make much sense. And besides taking a lot of time and extra weight to prep, elaborate meals burn a lot of fuel. Freeze-dried dinners are more expedient, but at $5-12 a pop, they’re not very budget-friendly. The expense makes sense when you’re out for five nights, but not so much when you’re out for 150.

Backpackers can tailor their gear to the conditions (and they have nicer clothes).

Backpackers can time their trips for optimal weather. They can keep an eye on the forecast in the days leading up to their trip and tailor their gear to fit the conditions they’re likely to encounter. Of course, a smart backpacker still plans for contingencies, but they at least have a sense of what’s coming.

A thru-hiker, in contrast, may start their hike in the sun-bleached desert, but sooner or later, they’ll find themselves postholing in the snowbound Sierra. They may start hiking in winter, but eventually, it will be hot and humid and they’ll still be on the same dang trail.

There will be days when a thru-hiker is too cold or too hot, when their rain gear feels like dead weight at the bottom of their packs but they have to carry it anyway because they know the rain will come back eventually. The time will come when they must swap heavy winter bags for lightweight quilts. At some point, before all’s said and done, they may swap them back again. Thru-hikers must do their best to choose gear that works across varied conditions and accept that it won’t always be perfect.

Related: While plenty of thru-hikers invest in performance clothing, it all ends up as smelly rags in the end. Some bow to the inevitable and opt for secondhand clothing or Walmart athletic wear to begin with. Backpackers are likelier to hit the trail decked out in “proper” hiking clothes. Also, said clothes are likely to be in better shape (i.e., not held together only by floss and duct tape).

But which one’s better? 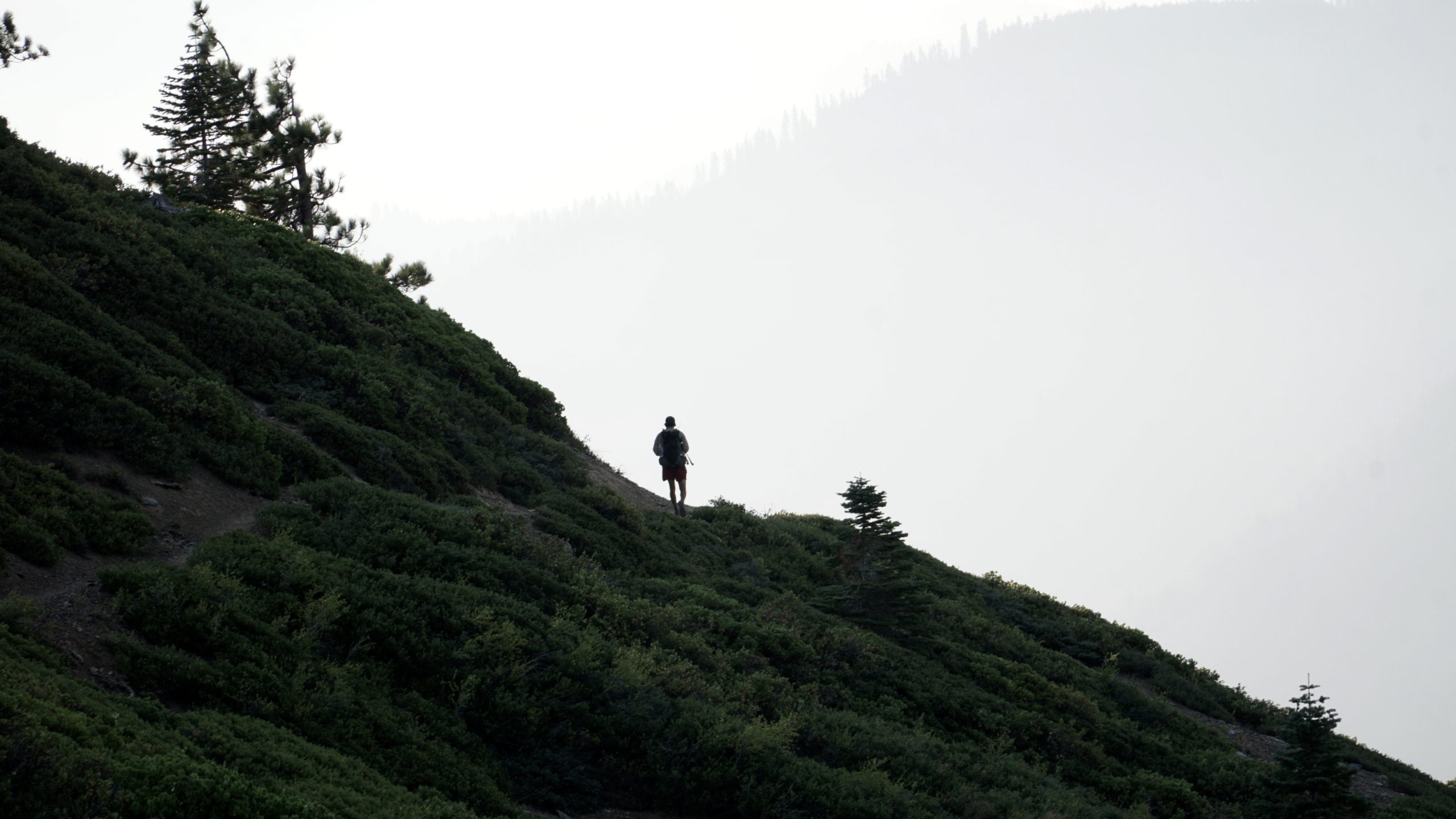 I’ve been a backpacker and I’ve been a thru-hiker, so I feel comfortable saying that one truly is no better than the other. Both have their pros and cons and their unique quirks. To the thru-hikers who love to smell the roses along the way, and to the fast-and-light weekend warriors, I see you guys too.

Just like the technical definition of the term “thru-hike,” it’s not as cut and dry as you might think. The good news is that, as long as we treat the trail and each other with respect, there’s enough room in the backcountry for all of us to hike our own hikes.