The following post is courtesy Daniel Peddle. Peddle has directed four feature films- including Trail Angels, published several books, shown his paintings globally, discovered actress Jennifer Lawrence, and owns a casting company with an international clientele. He has lived in NYC for over twenty years . . . where he misses NC and the dirt road he grew up on.

A few months after completing my first feature film, “The Aggressives”, a friend and amateur outdoorsman invited me hiking in New Hampshire. After five years of exploring the bowels of the inner city submerged in a little known urban subculture, I was eager for some tree time far from the throbbing boroughs.

In my sneakers, I joined my Patagonia outfitted buddy at the base of Mount Washington, elevation 6,288. Our sylvan stroll quickly gave way to a steep incline. It started to snow and grew into a blizzard. By the time we took a break for lunch I could no longer feel my fingers. We passed the tree line and the temperature dropped drastically. The wind whipped snow into blinding billows around me. My friend urged me onward insisting we summit. Soon I found myself sprawled on an icy sheet, pulling myself along on jutting rocks as I tried not to look below.  “You probably should have crampons!” my friend shouted through the wind. I saw my life flash before me, and I wondered what crampons were.

Six hours later, on the drive back from the hike, exhausted and steaming off sweat, my friend continued, “We really weren’t prepared properly. People die up there like that. I thought we might need a Trail Angel to save us”. It was the first time I had heard the term Trail Angel.  Images of winged liaisons for the divine comforted my mind. But my friend explained Trail Angels were really just simple folks helping hikers. In a posttraumatic sort of haze, I realized I had my next subject for a film and a perfect excuse to get out of NYC. Jokingly my friend agreed to produce.

“Angeling” was still a rare and “magical” act on the AT when we began the film and the only way to research the process was to hit the trail. We started in Caratunk, ME, at a “feed” for hikers who had been on the trail for over four months. They all had a certain blissful yet exhausted gaze and when they answered questions their eyes would drift to the treetops. It was here we got the idea to ask the hikers to “stare into the camera”. Silently their personal narratives seemed to spill forth from soulful eyes.

Most had encountered the same Trail Angels along the way and nearly everyone agreed on a handful of “legends”. At this feed, we also met Baltimore Jack, who is known on the trail for having hiked it seven times. Although he was serving the hikers and had helped organize the feed, he was emphatic that he was not a Trail Angel. Nevertheless, Jack became our real entrée into the world and his knowledge proved invaluable to our process. (And we caught him “angeling” plenty of times…) He also connected us to our key subjects: Mala, Mary, and Janet, a trio of Biblical proportion.

Mala I met living out of his truck doing angeling along the southern end of the Trail. He had a habit of bonding with a certain group of hikers and after a few days of not seeing them, he could guestimate their whereabouts rather accurately. We’d pull up to a random trailhead and Mala would say “Joyfoot should be coming out here in less than half an hour.” Sure enough, fifteen minutes later, Joyfoot would tumble out of the woods smiling ear-to-ear as Mala offered a “cold beer”. 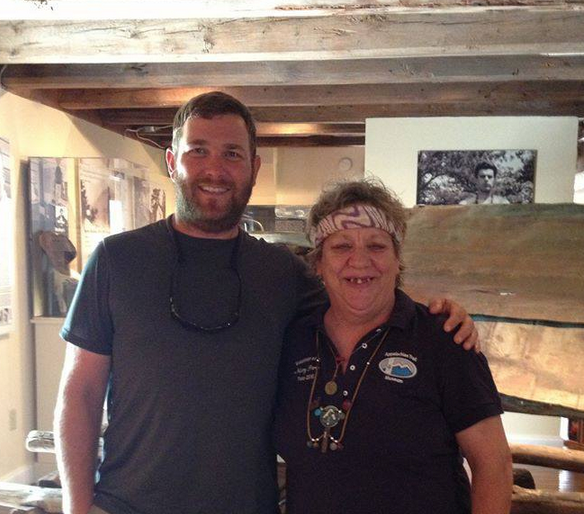 We found Mary on the AT in Duncannon, PA posting a flyer for her free July 4th backyard meal. Mary is the type of lady one might describe as a graduate of the School of Hard Knocks. She’s been “carless, homeless and jobless … like the hikers are” and that’s why she relates to them. She also appreciates their single-minded determination even though she does not hike so much herself. She knows how to stretch a dollar and we witnessed her feed the masses with a couple cartons of eggs and homemade biscuits.

And then there is Janet, large-than-life with a heart of honey! Much to the chagrin of her daughters, Janet had turned her modest home in Irwin, TN into a “hiker hostel”. We filmed her over a few years and watched her front porch crowd with hundreds of empty hiking boots that she turned into flowerpots. Janet’s Southern hospitality is legendary on the trail. It was not uncommon to see hikers derailed for weeks at this popular pit stop. A few even came back to hike the trail through her town only. She called these hikers “repeat offenders”.

You don’t have to know what crampons are to enjoy this film. Even if you have never set foot on the Appalachian Trail, those who choose to set aside six months of their lives to hike all 2,175 miles of it will surely inspire you. But even more uplifting are those unsung heroes, the Trail Angels themselves, who organize their lives around helping these “thru hikers”. Witness the transformative and cyclical effect of hikers who reconnect with nature through the trail and angels who reconnect with society through the hikers– forming an unexpected community based on the ethics of reciprocity that stretches up the East Coast through the backwoods of small town America. But living by the Golden Rule is no walk in the woods.

Trail Angels is just as much a portrait of the blues as our subjects display their wounds and sacrifice during the cold months when the stream of hikers trickles to a halt. Now our beloved Trail Angels await snapshots from Katahdhin, the summit of the AT, where Hikers stand with uplifted arms and faces beaming joy. Probably they will never see these faces again, but the memory of a good deed transcends and in this triumph, both Trail Angel and Thru Hiker are united.

Trail Angels is available on iTunes, Amazon and other Video on Demand outlets. Find out more at 7thart.com/films/Trail-Angels.