Ever since Zach Davis wrote Appalachian Trials and started the blog that became The Trek, our purpose has been to help long-distance backpackers reach their goals. In the past, our surveys have focused on identifying the optimal gear choices for Appalachian Trail (AT) thru-hikers. This year, for the first time, we conducted a separate survey on illness, injury, and reasons long-distance hikers drop out before their intended finish point. One hundred and forty-one hikers told us about their experiences. Keep reading to see what they shared, or skip to the TL;DR at the end.

The Trails They Hiked

The vast majority of hikers in our survey had walked at least a section of the Appalachian Trail (AT), and two thirds had completed a thru-hike (walking over 2000 miles in less than a year). 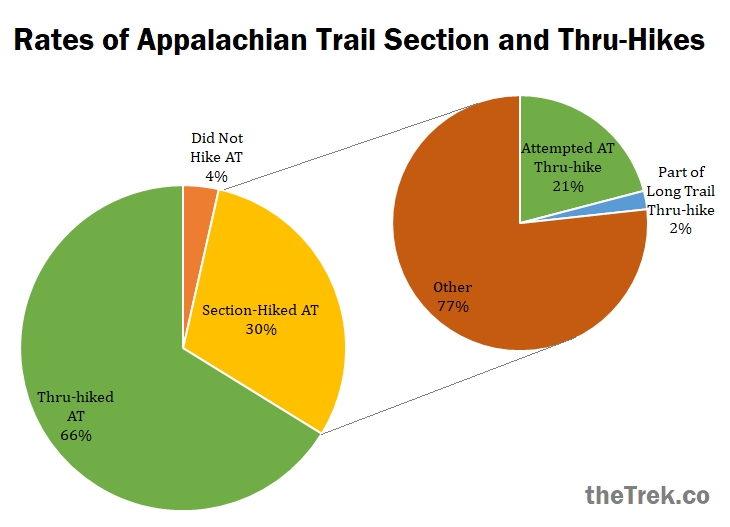 Of those who section-hiked, 21 percent had intended to thru-hike but had not finished, 2 percent hiked the section of the AT that overlaps with Vermont’s Long Trail, and three quarters section hiked for other reasons.

Beyond the AT, participants in the survey had trekked across 27 other long-distance footpaths: 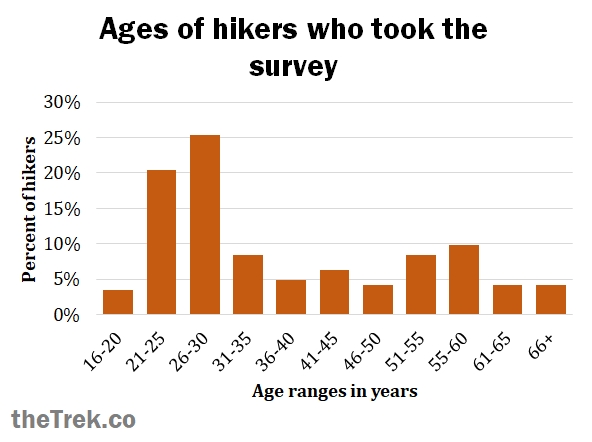 Hikers were most commonly in their twenties, with fifties and early thirties being the next most common.

Hikers were asked their height2 and their weight3 prior to starting their long-distance trek, and this information was converted to calculate Body Mass Index (BMI). The range of BMI’s was from 17 (underweight) to 54 (obese), with the average BMI being 27, plus or minus 6 units. While the standard measurement puts 27 at slightly overweight, it should be noted that, for this sample, muscle mass likely inflated the BMI calculation for many of the hikers. Still, 27 percent fell into the overweight range, 22 percent in the obese range, and 2 percent in the underweight range.

The average distance reported for a single long-distance trek was 1418 miles. However, hikes ranged from 25 miles to 5,000 miles, and the majority of hikes described were AT thru-hikes.

We asked hikers how many days it took them to walk the section or thru-hikes they described. Several hikers had walked more than one long-distance trail, so we used the information from the longest trail or continuous section they had walked. Many of them reported in months or weeks instead, so this information is not as accurate. Still, based on their reports of the length of their hikes and the time it took them, we calculated the average pace for thru-hikes, attempted thru-hikes, and intentional section hikes:

Hikers were asked to check a box for all listed injuries and illnesses they had experienced during their long-distance hikes, and given the option to mention any other illnesses or injuries they incurred. 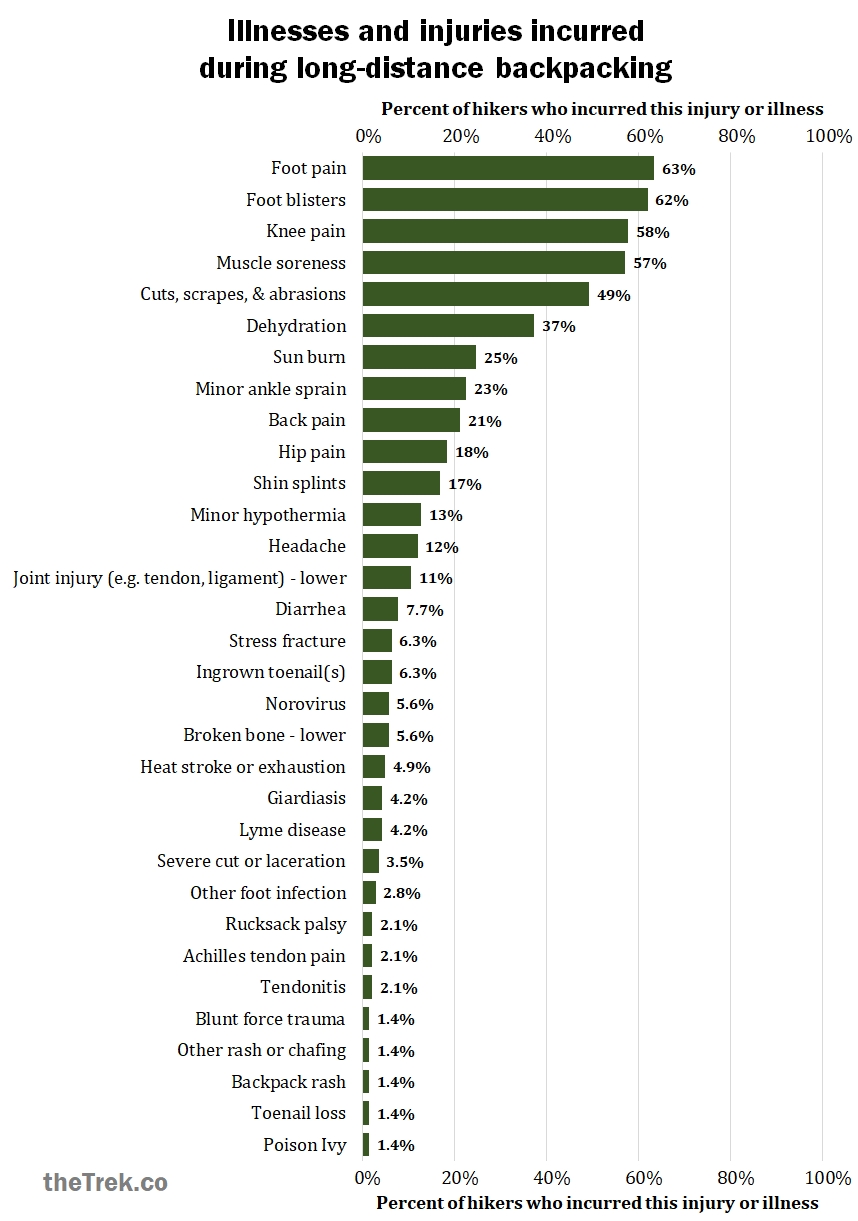 About half or more had experienced foot pain, blisters on their feet, knee pain, muscle soreness, and cuts, scrapes, and abrasions. The most prevalent severe injury was a joint injury in the lower body (including any severe tendon or ligament problems). Non-specific symptoms like headache and diarrhea affected about 10 percent of hikers, but the most common specific illness was Norovirus, contracted by 1 in 20 hikers. Norovirus cannot be killed by hand sanitizer, only soap and water, so it is more common in the backcountry than in “civilization.” Heat stroke/exhaustion, Giardiasis (“Giardia,” contracted from contaminated water), and Lyme Disease (a tick-borne illness) were about as prevalent as Norovirus. 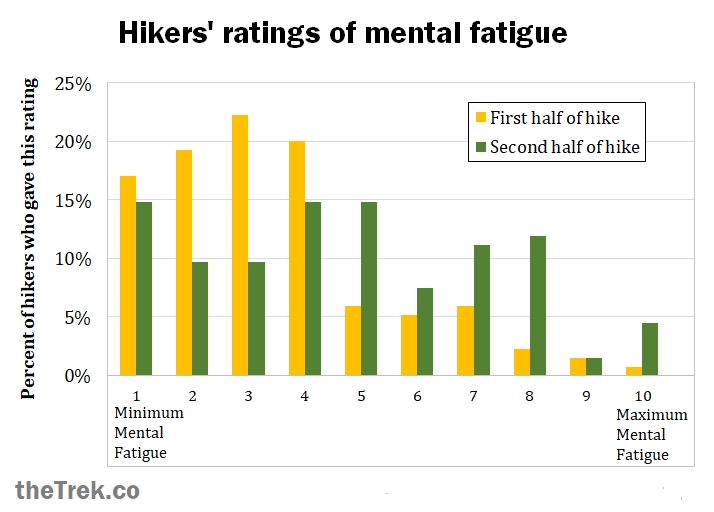 Mental fatigue was significantly higher during the second half of their hikes, although mental fatigue ratings tended to be low during both the first and second halves of the hike. This trend was observed across thru-, attempted thru-, and intended section hikes.6

A major question we wanted to address with this data was which factors predicted hike completion, and inversely, dropping out. Only 66 hikers (47 percent) said they had dropped out of a long-distance hike without completing it (remember, some hikers were reporting on more than one hike, so even though two thirds had thru-hiked the AT, many of these were also reporting on prior attempts or other trails).

Of those 66 hikers who had dropped out of a long-distance hike, their major reasons for ending their hikes fell under the categories of major injuries or illnesses, minor injuries or physical problems, mental fatigue or loss of interest in the hike, and money, time, or family concerns. 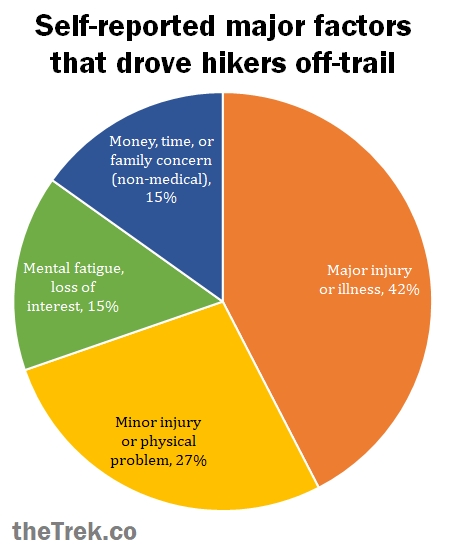 Beyond their self-reported general reasons for dropping out, I analyzed whether sex, age, BMI prior to the hike, backpack base weight, mental fatigue, illness, injury, and the distance hiked per day predicted trail completion.7

The following factors did NOT significantly predict whether a hiker completed their intended distance or dropped out: age, sex, distance hiked per day, mental fatigue, and contraction of a major illness.

People were more likely to complete their intended section or thru-hikes if:

To clarify, based on hikers’ self-report, in many cases illness and minor injuries impact their experience such that they are unable to or no longer want to continue their hikes as intended. Still, our statistical findings show that, in most cases, hikers who sustain minor injuries or contract an illness while in the backcountry are able to complete the hike they set out to do.

Many, many, thanks to all 141 hikers who generously gave their time participating in this survey. Additionally, I would like to thank Steven Woods for designing the survey, Maggie Slepian for coordinating the collaboration on this post, Aleta Hegge for designing the title image, and Zach Davis for enabling me to geek out about the mountains.