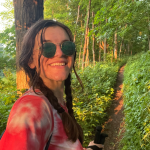 When Willy hopped out of his rusted red truck with a billowing grayed beard and a devilish smirk, I could immediately tell he was going to be an Appalachian Trail character I wouldn’t soon forget.

With a grunt, he popped open several coolers in his truck bed to reveal some magic for the thru-hikers in my tramily.

I’m not sure what I expected, but it exceeded anything I could have imagined. Inside those coolers was the perfect post-hike treat: ice-cold beer.

There are plenty of folks on the trail that don’t drink alcohol, but I’ve come to learn that a drink at the end of a long day (particularly a crisp beer) is a trail commonality.

Talking with Willy was like meeting an old friend again. There’s a certain causality in the way hikers communicate. Like we’ve always known each other. Trail angels, aka those who typically set up stations with food and other supplies to aid thru-hikers, are no exception to that rule.

However, Willy was adamantly against the idea of being a trail angel. In fact, he chose to embody its antithesis instead.

Willy is THE trail devil.

When we asked why he considered himself to be the trail devil instead of a trail angel, he said this: “trail angels give hikers food and water, I give hikers beer.”

I encountered Willy just three short days into my trek, and already I learned an important trail lesson.

Having expectations, really – any expectations whatsoever – is pretty much null end void on the AT.

For those of us on the trail, we love and crave the uncertainty and possibility of daily life. And it turns out everything, from weather to even trail magic, can be much different than anything you could ever think up.

As the sun started to set that day, we sat together laughing and chatting. Willy stood and bid us all farewell on our journey and returned to his truck to continue his car camping tour of the AT.

Happy travels Willy, thanks for the beer.

Sparky is a writer and outdoor enthusiast from Florida thru-hiking the Appalachian Trail in 2021. As a recent graduate of the University of Florida, Sparky hopes to work in public interest communications and push for environmental and social change. When she isn’t on the trail, you can catch Sparky at your local coffee shop or vegan cafe. Happy trails!