Welcome to Vermud: Our First Day on the Long Trail

Dobby and I set off from the Northern Terminus intent on the Laura Woodard Shelter about eight miles away. I had read that one of the mistakes thru-hikers often make is trying to tackle too many miles too early on in their hike. Since I had previously only hiked about five miles with a full pack before this, I want to start off slow to avoid injury and unnecessary soreness. We climb up, down, back up. I feel as light as a feather. We’re really doing this. The sun is shining through mist in the trees and the overall glow this causes reminds me of Lothlorien, the elvish forest described by Tolkien in the Lord of the Rings.

The terrain is very rocky, and muddy pits abound. Sometimes there are bridges or stepping-stones, placed there by volunteers of the Green Mountain Club, to navigate particularly muddy sections. Often there are not. One such mud crossing, I get about halfway across a bog bridge when I turn back to look at Dobby. He decides not to use the wooden bog bridge and tries to run across what appears to be open ground beside it. As I begin make some sort of sound to halt his forward progress, Dobby jumps all four feet into the bog he has discovered only appeared to be solid ground. He sinks into mud up to his chest and looks up at me with a face full of regret. I look down at my own mud-splattered shins and shoes, then glance back at Dobby.

A few miles into the day the trail seems to seemingly disappear up a 15-foot wall of earth. From the worn spots on roots and rocks I realize that to go forward, we must go up. Dobby has no problem climbing, and I find my share of hand and footholds to the top. Weird, I think, that was a lot more like climbing than hiking. I chalk it up to an unusual erosion event that hasn’t been rerouted yet and continue on down the trail.

We arrive at Shooting Star Shelter at 11 a.m. and at four miles in this is our halfway point for the day, so I decide to stop for lunch. I pull out my stove and boil water to make a proper breakfast of warm oatmeal. Dobby explores around the shelter, sniffing all the things.

I notice someone has left an empty fuel canister in the shelter. I find this frustrating, as one of the principles of Leave No Trace (or LNT) is to pack out anything you pack in. There are no trash cans on the Long Trail, or on most trails for that matter. Whatever you bring with you needs to also leave with you. To give this person the benefit of the doubt, perhaps they accidentally forgot the canister. I decide to pack out the canister. This means I will be carrying an additional five ounces or so until I resupply in 45 miles. Five ounces doesn’t seem like much, but when you have carefully pared down your pack weight to your lightest, most essential items, five ounces of trash is significant.

Moral of the story: Everything you bring into the woods also needs to leave the woods, preferably with you.

I use the rest of my water making lunch, so I head to the pump that is the water source for Shooting Star Shelter to refill my water bottle. As the pump comes into view, I notice the top is hanging off the side, a bad sign. My fears are confirmed when I prime the pump and establish it is inoperable; I’m out of water. On some trails this would be a big deal, but the Long Trail has an abundance of water sources, so I leave the shelter with my water bottle empty. 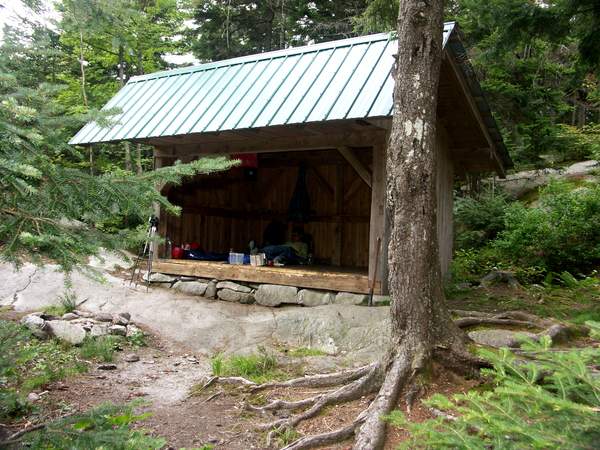 The Long Trail is comprised of several different kinds of overnight areas, including lodges, tenting areas, and shelters. Lodges are four-sided buildings with a door (my favorite), tenting areas are usually just areas with flat ground, and shelters are three-sided buildings characterized by an open front. All overnight areas include a privy (this means outhouse) and sometimes a picnic table and/or fire ring.

At 3 p.m. we arrive at the Laura Woodard Shelter to find that the water source, a small creek, has run dry. There is also a forecast of rain tonight, so the open nature of the shelter could prove problematic and put a real damper on my night.

Get it? Damper.Because I will get damp. From the rain.

Since it’s only 3 p.m. I choose to push on to the next shelter. Jay Camp (a lodge) is only 3.5 miles away and we have more than three hours of daylight left, plenty of time. Right?

The only thing standing between me and where I will sleep is Jay Peak. Remember that time when, in my adorable naivete, I thought that climbing that 15-foot wall of earth was just a fluke? When I thought the trail could not possibly have a climb on purpose? I was so young and dumb then. Jay Peak is a scramble. What is scrambling, you ask? Let’s consult Wikipedia.

Scrambling (also known as alpine scrambling) is “a walk up steep terrain involving the use of one’s hands.” It is an ambiguous term that lies somewhere between hiking, hill walking, mountaineering, and rock climbing.

Essentially, Jay Peak is a cute little mixture of rock-climbing and seeing how fast I quit this trail. Dobby and I climb from rock to rock, and I’m doing a superb job of not looking down. Eventually the trail opens up on what I realize is a ski slope. I see no blazes here. Blazes are painted markings, usually on trees, used to delineate and assist hikers in navigating the trail. Sometimes blazes are impeccable, so close together you can stand next to one blaze and see the next. Sometimes they aren’t. I consult Guthooks, an app on my phone that shows both the trail and my GPS location, and it appears I need to head to my right, up the ski slope. Dobby runs up ahead, certainly enjoying the open ground.

The top of the mountain is windy and cold. As a result I do not stop to look around. At the apex of the slope I see the Long Trail crosses the ski trail on which I have been walking. We must have missed a turn that led to the summit, but it’s getting dark and I’m too tired to care enough about climbing to the top. Consequently I skip maybe one-quarter mile of the trail. I turn right, back onto the trail, and begin my descent off Jay Peak.

Though I thought climbing up the mountain was hard, climbing down is worse. It’s less steep, but the combination of my exhaustion and the pain from the jarring, repetitive concussion on my knees is starting to get to me. I move glacially, pondering each step down before I take it, attempting to judge just how much pain it’s going to cause. Dobby is constantly turning around to look at me. He’s probably wondering why I have suddenly turned into a puddle of molasses sliding slowly down the mountain.

OK, maybe I looked around a little.

We finally reach the bottom with darkness closing in. I see a wooden sign nailed to a tree that reads “Jay Camp 2 miles,” with an arrow pointing down a side trail. “Two miles?” I cry out into the twilight, adding a few choice four-letter words, knowing that no matter how far the lodge is, that’s where I’m going. I glance at the sign again and realize I missed a small punctuation mark. The lodge is 0.2 miles away, not two.

Dobby and I enter camp just as the sun sets. We meet other hikers and a few Green Mountain Club (GMC) volunteers surveying the northern part of the trail. A red fox enters camp as we make dinner and his familiarity with people is not a good sign. Wild animals that are this comfortable with people can turn into nuisance animals that steal food and perhaps even end up in confrontations with humans. Dobby catches sight of the fox and chases it off; hopefully the fox learns to stay away from the camp. After dinner I have just enough time to set up our sleep system in the now-full lodge before the talking dies away and we are all asleep by 8:45.

Are you a gearhead who is dying to know what gear I chose to sleep on/with for this trip? Never fret, my sleep system is shared below.

Sleeping pad: Therm-a-Rest Z-Lite, cut down to Dobby-size (slightly larger than half the original size).