A coast guard helicopter was on its way to a mission in west central Alaska when weather forced them to change their planned route by about a mile. This unexpected detour led to the discovery of a man who was waving frantically for help next to a shack that had “HELP” and “SOS” scratched on the metal roof.

The victim had severe leg injuries, was noticeably sleep deprived, and was waving a white flag on his hands and knees when the officers approached the area.

It was discovered that the man had been rescued from a multi-day grizzly bear attack at his remote mining claim – stating that after the bear initially attacked, it continued to come back to the shack each night in an attempt to “finish him off”. Although he did have a pistol, he was down to his last two rounds of ammunition and likely wouldn’t have lasted too much longer if the bear continued its pursuit. 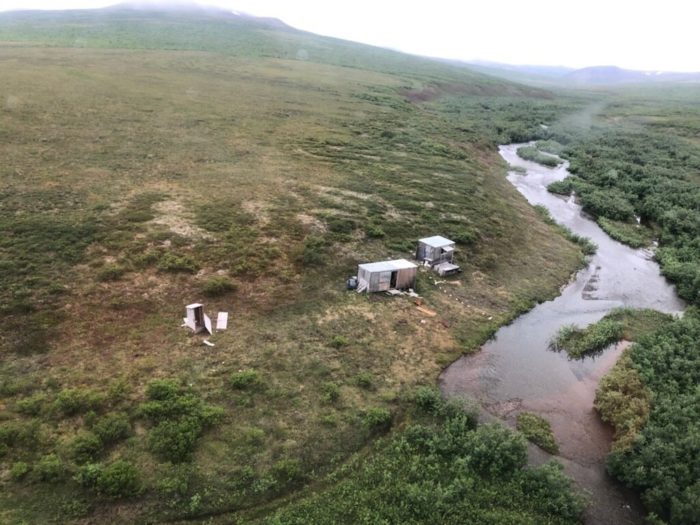 The man reported that he was dragged down to a nearby river in the initial fight, and that he hadn’t slept in days while fending off the bear. He suffered injuries to his leg and torso, which made it difficult to escape for help. Although the man’s identity is being kept private, it was reported that he is in his late 50’s or early 60’s, and had been alone at the mining claim since July 12th with no phone service. He was reported missing by his friends a few days prior after failing to return to Nome, Alaska at his expected time.

It’s uncommon for helicopters to be flagged down for help in this remote part of Alaska, and Coast Guard Commander Carbajal, who aided with the rescue, said that “if (they) would have been in the next valley over, (they) would have totally missed him”.

Although grizzly bears are common in the area, a spokeswoman for the Coast Guard in Alaska said it’s unusual for a person to be harassed by a bear in this way. In fact, only 68 people were hospitalized for injuries resulting from a bear attack in Alaska between 2010-2017, and of those hospitalized, ten had died.

According to the Coast Guard, this tragic encounter serves as a reminder to always carry some form of emergency beacon or satellite phone when spending time in remote wilderness areas.

The victim was flown by the coast guard to a hospital in Nome, Alaska to be treated for his injuries, and he is expected to survive.