Today, at 5:25pm on top of Springer Mountain, history was made.

Heather ‘Anish’ Anderson just set the record for the fastest unsupported hike of the 2,285-mile Appalachian Trail, finishing in 54 days, 7 hours, and 48 minutes. She averaged about 42 miles a day over the course of the trail.

History repeats itself, and so does Anish.

In 2013, Anish set the record for the fastest unsupported thru-hike of the Pacific Crest Trail, hiking the entire 2,663 miles in only 60 days, 17 hours, and 12 minutes. 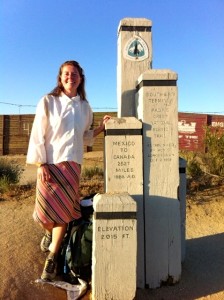 Anish at the Southern terminus of the PCT

Which means… Anish is now the first person to hold the unsupported record on the Appalachian Trail and the Pacific Crest Trail simultaneously. 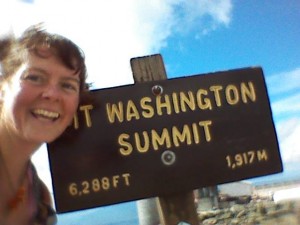 Anish on top of Mt. Washington in NH – the mountain with ‘the worst weather in the world.’

Anish posted her intentions on the Fastest Known Time Proboards on July 30th and began hiking Southbound from Katahdin August 1st. She used a SPOT device to document her journey, but did not release the data until she had completed the trail in an effort to retain her privacy.

The record is unofficial, pursued for pure love of the trail. It was previously set by Matthew Kirk, whose 2013 hike took 58 days, 9 hours, and 38 minutes and finally dismissed doubts that the trail could be hiked in under 60 days (check out his book Fast, Light, and Free on the Appalachian Trail). The previous women’s record was held by Liz ‘Snorkel’ Thomas, who hiked the trail in 80 days, 13 hours, and 30 minutes.

In declaring her intentions, Anish wrote, “I hope in my endeavor to not only bring parity to the male and female self-supported records, but if possible lower it overall. These records are currently held by Mr. Kirk and Miss Thomas, both of whom I hold in very high esteem.” 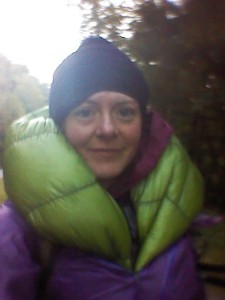 Anish has been labeled ‘the Ghost’ for her frequent night hiking, when she passes through the forest like a shadow.  The hours she keeps can cause her to run into some unexpected company.

“Nothing like almost stepping on a copperhead to wake you up nighthiking.” She posted on September 5th, with the hashtag ‘AdrenalineisBetterthanCaffeine’. Her follow-up post on September 6th was “And tonight it was rattlesnake night…” 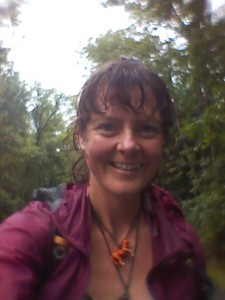 True to her ghostly reputation, Anish doesn’t advertise her hikes. The cryptic comments on her Facebook page were the closest to updates that she offered to the hungry hikers following her. But after the whole nation watched Scott Jurek struggle to gracefully divide his focus between his hike and his fans, Anish is well aware of the benefit of anonymity. There has been a lot of discussion about the commercialization of the A.T. lately, but it seems that Anish, with her big smile and trademark dresses, has managed to slip beneath the eye of the media. 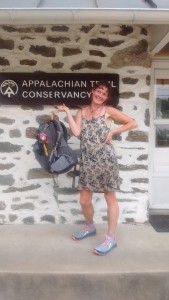 Anish posing for her halfway picture in front of the ATC headquarters in Harper’s Ferry, WV.

Her Facebook page is split between her own beautifully written observations and quotes ranging from ultra-runner Killian Jornet to aviator Amelia Earhart. Anish posted the Ken Chlouber quote, “Make friends with pain, and you will never be alone.” on August 28th, after making it through what is widely recognized to be the hardest section on the Appalachian Trail, Northern New England. This quote seems to embody the essence of Anish, who has made an art out of walking through pain. 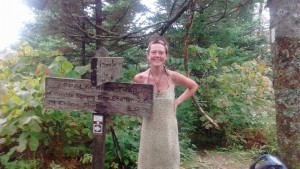 Anish at the end of her journey, just after Clingman’s Dome

But perhaps the most telling quote Anish wrote was posted Sept.20, 4 days before finishing the trail, and it was written by herself:

“I think I’ll just do the minimum miles necessary to break the record and just coast in from here,” said Anish. To no one. Ever.#CrushingIt #MEGA15

Which tells us exactly how she managed to accomplish the impossible– by being wildly, uncontrollably in love with pushing her body to the limit. 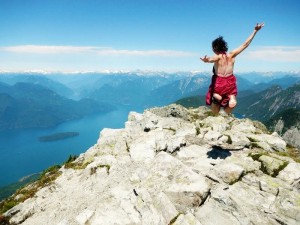 On behalf of Appalachian Trials, congratulations to Heather Anish Anderson!