Day 5 saw me leave the Lakeview Campsite in Lake Cowichan to walk the long North Shore Road from the east end of the lake all the way to the west end. It was a rainy, monotonous walk. The flatness didn’t give my body any variation in its movement, and by the end of the day I was stopping frequently just to get a break from the pain. I hoped the more varied terrain ahead would call forth more dynamic movements and flex different muscle groups, to ease on the repetitive jarring motions of flat-walking. I relied on podcasts to get me through the day. 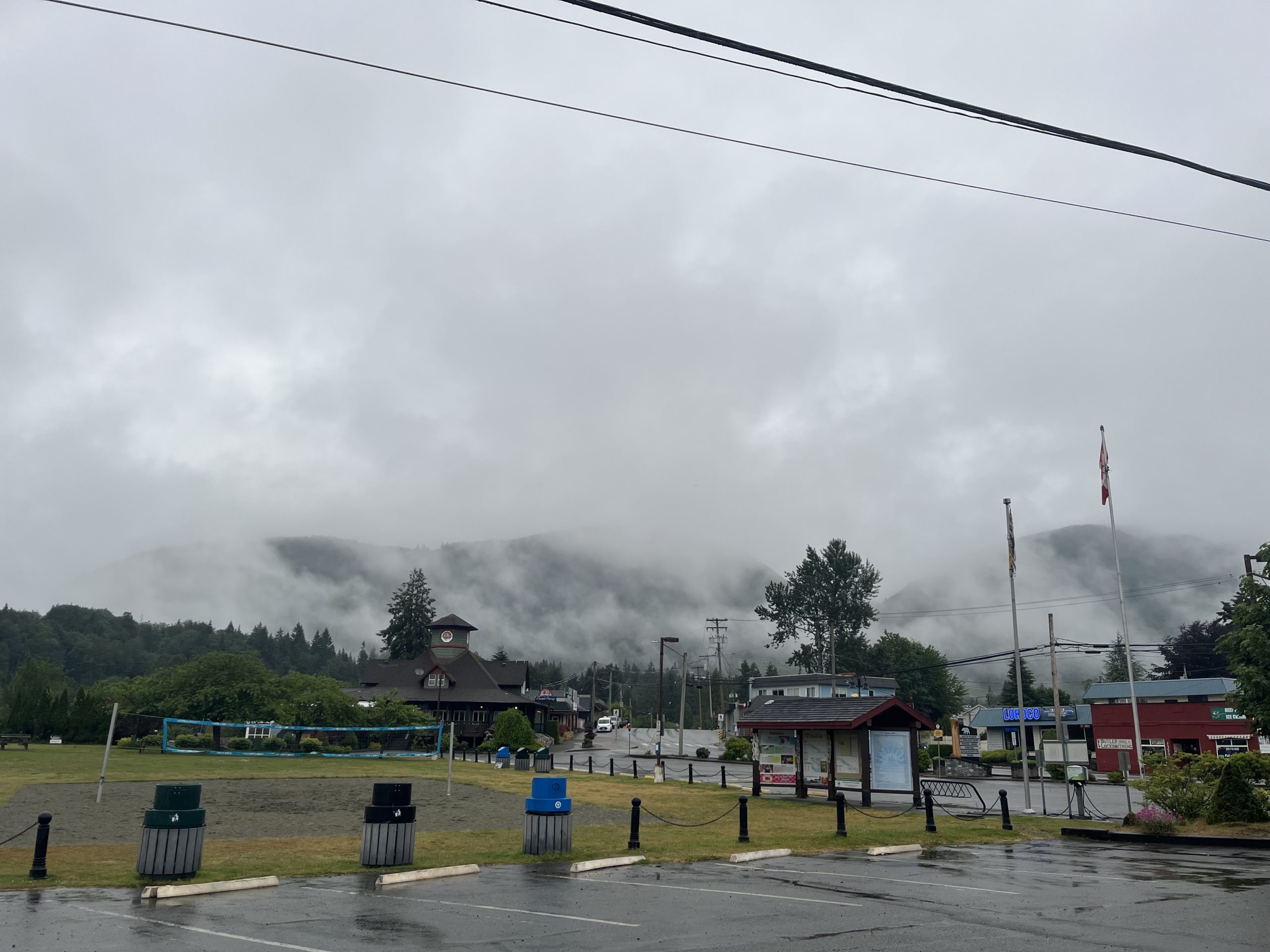 The town of Lake Cowichan, in a fog blanket

When I passed through the tiny town of Youbou, I saw no less than 5 elk along the road. I wasn’t expecting to see elk this early in my journey! Apparently, some residents of the town feed them, while others see them as pests. While you wouldn’t want to get o the wrong side of one for fear of a charge or a kick, you can’t deny they are beautiful animals.

I stopped at Cassie’s Coffeehouse for a sandwich and carrot cake and a break from the rain. Among the brochures and magazines was a self-published collection of poetry by Richard Walter Elliott (a local resident, I assume). In a poem about a butterfly swarm in California State Park, he writes: “But cars that pass, have opaque glass! / How can the drivers see?”

That made me reflect on my road walk. Instead of envying the drivers as they sped past my snail’s pace, what was I able to see that they could not? 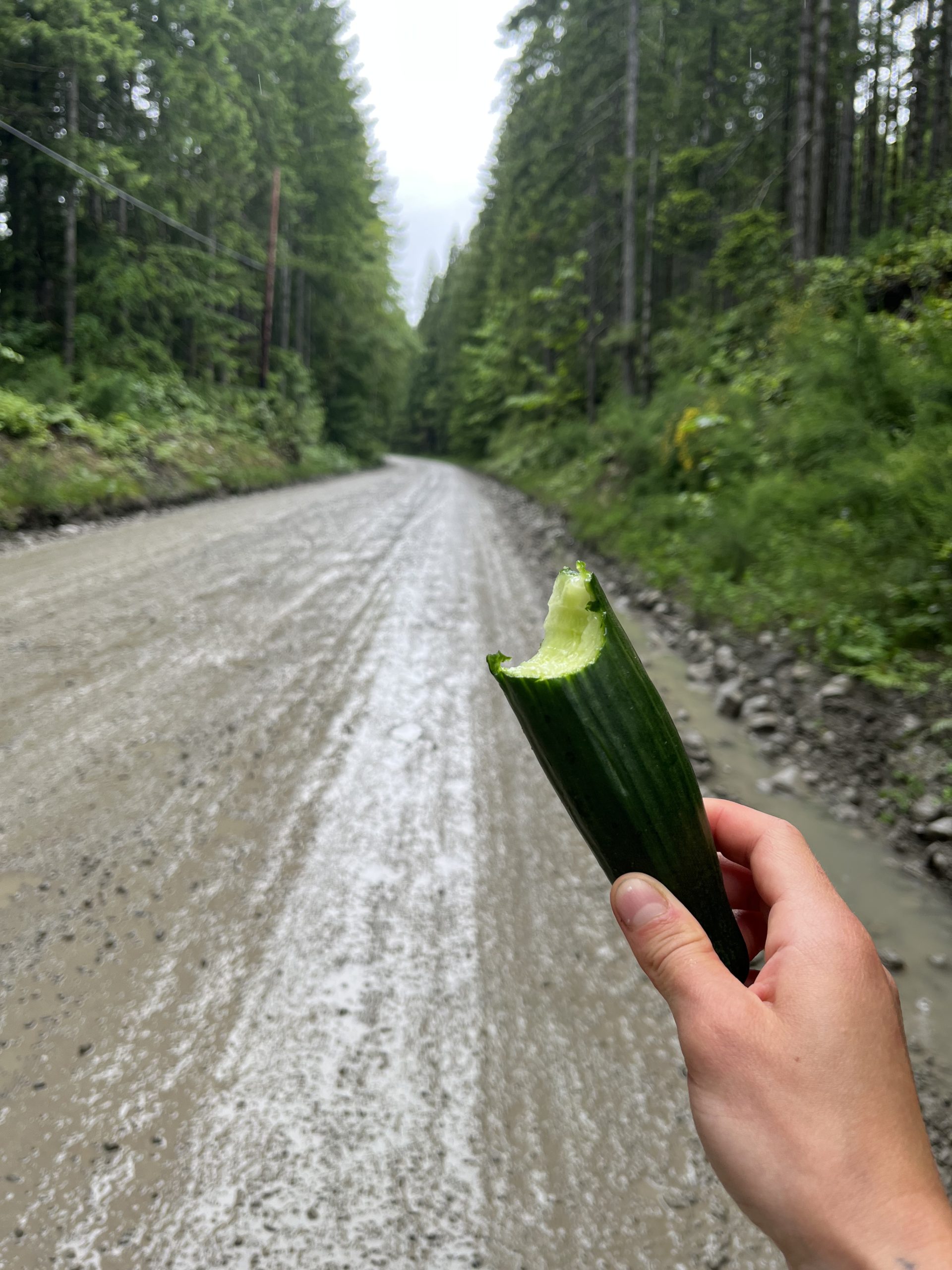 Well, the amount of roadside trash, for one. And the way the grass and weeds encroached on the shoulder, as if hard compacted dirt were no big deal at all. Logging trucks full of fresh felled trees hurtling past anti-logging roadside lawn signs. The pretty streams and waterfalls beneath the bridges.

Travelling slow in an environment that is designed to be passed by quickly, I learned a little about patience.

The next two days introduced some interesting variation to my navigation, which was a welcome change after days of long and flat roads and bike trails. From the west end of Lake Cowichan to the shores of the Alberni Inlet, the trail presents a wide variety of terrain – from dirt roads to overgrown two-tracks, to scrambling up fresh cutblocks, to nice soft single-track forest trail. These many segments get cobbled together to enable travellers to hop over the long detour that following a mainline road would take to reach the same destination. 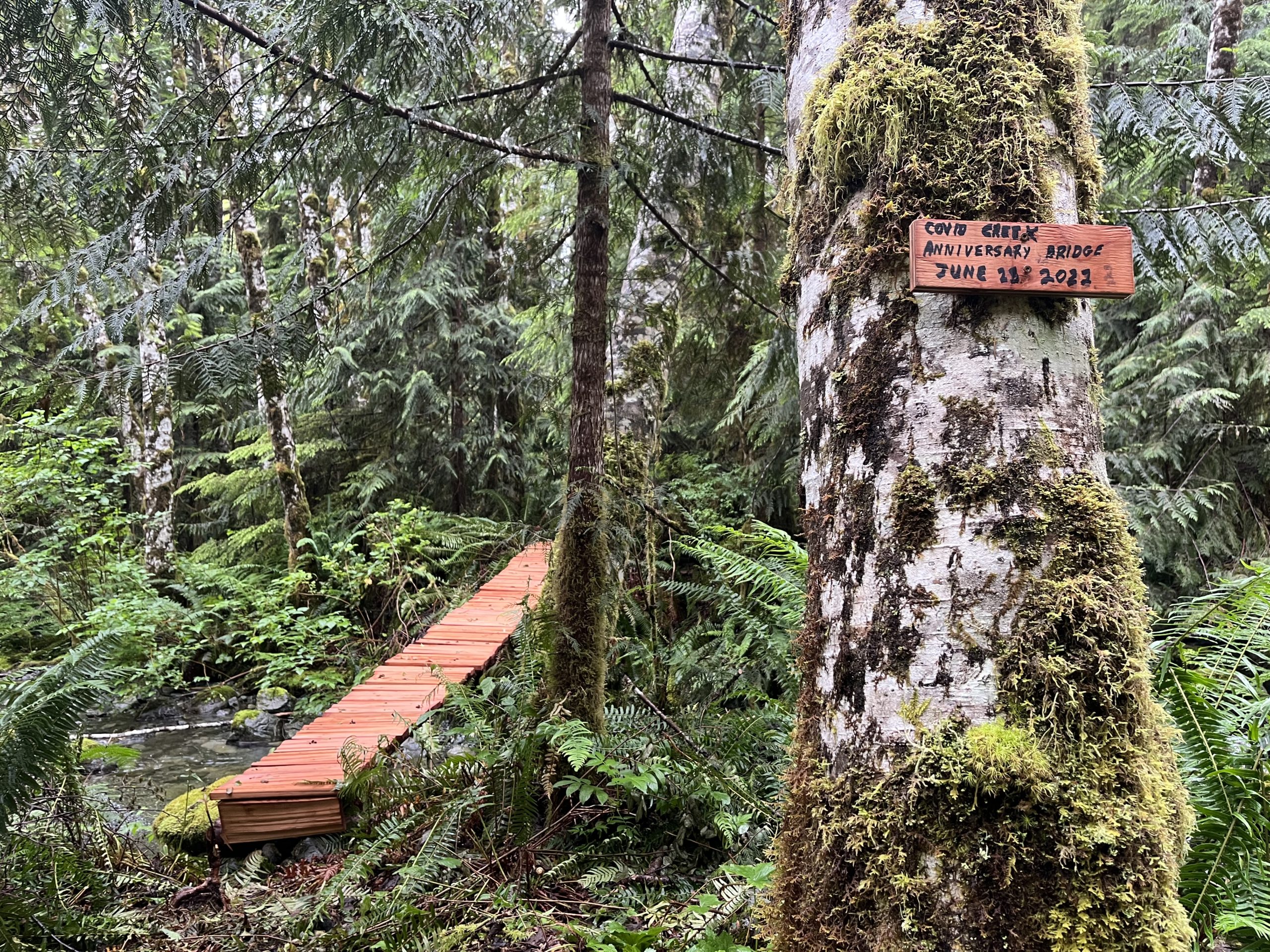 This bridge was installed by volunteers only a few weeks before I walked on it!

I had downloaded the maps on Avenza on my phone so I could see my location in real time, measure distances, and mark points of interest. (I also printed maps and brought a compass just in case). Seeing myself as a little arrow on the screen definitely was a huge help when I got lost.

On day 6, I was intending to take it easy after my long days of walking on hard flat surfaces, which had been really hurting my feet. Though I only did 13kms, it ended up being quite an interesting day. I had to ford the Nitinat River – which was flowing up to my belly button. Carrying my pack over my head, I stumbled over the rocks in the cold water, thankfully making it safely to the other side before I dropped my pack. After that was a steep climb that bordered on a cut block. I got confused a few times, as the boundary flagging for the cut block was very similar to the trail flagging. Wandering through the block trying to find my way, I fell on my face and my phone fell out of my side pocket. Thank God I noticed only a minute later and was able to find it again! 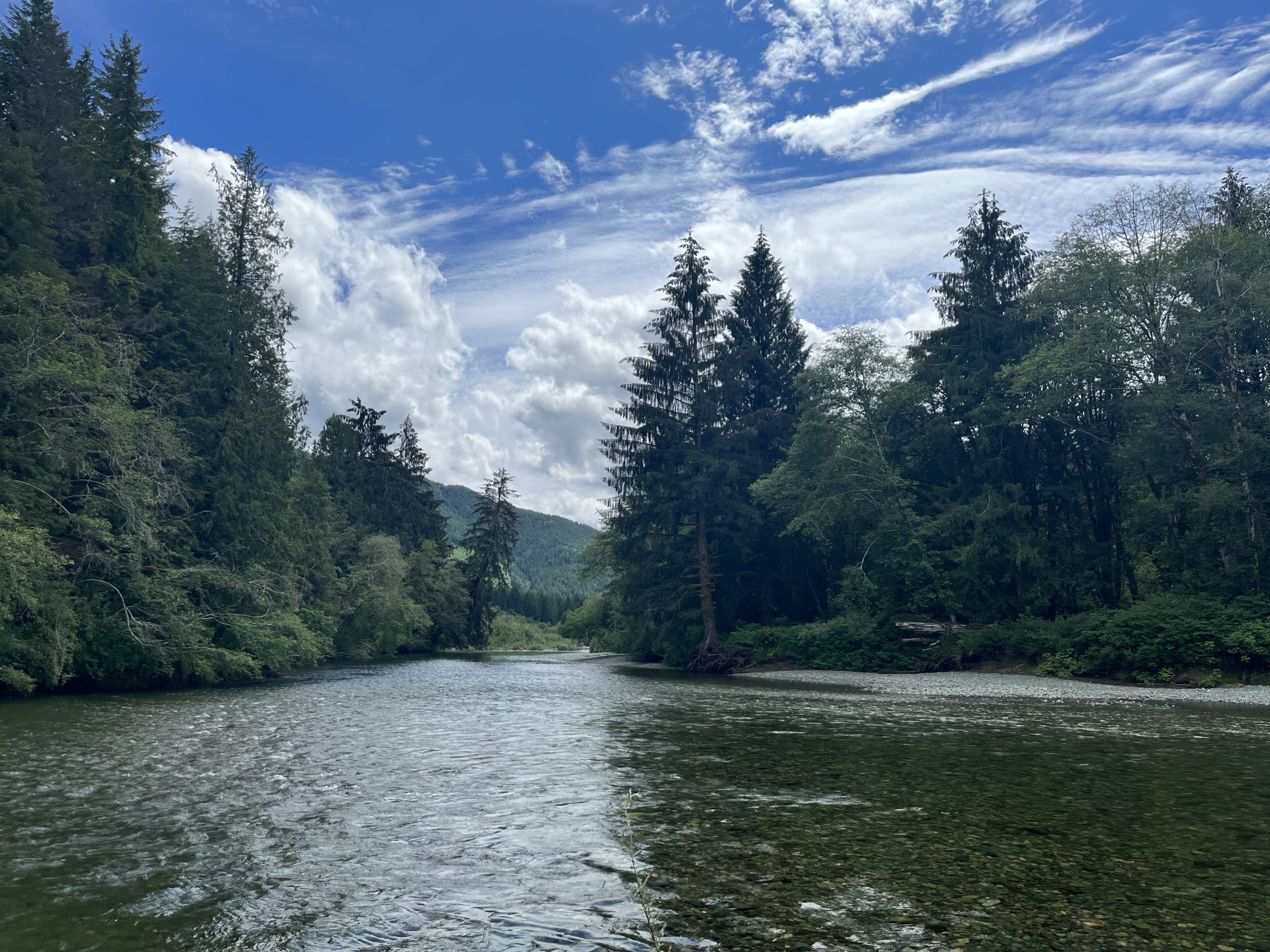 After that the trail followed roads down to Tuck Lake, where I stayed the night. The next morning, there was another big block climb in order to get out of the valley and connect to the next set of roads and Runner’s Trail, which followed an old indigenous overland route. In the mist and rain, I ascended the face of the mountain, bare of trees but still a jungle gym of debris. I hope that as the VIT becomes more established and attracts more traffic, we can trod down a clearer pathway in the tricky parts with our collective footsteps. 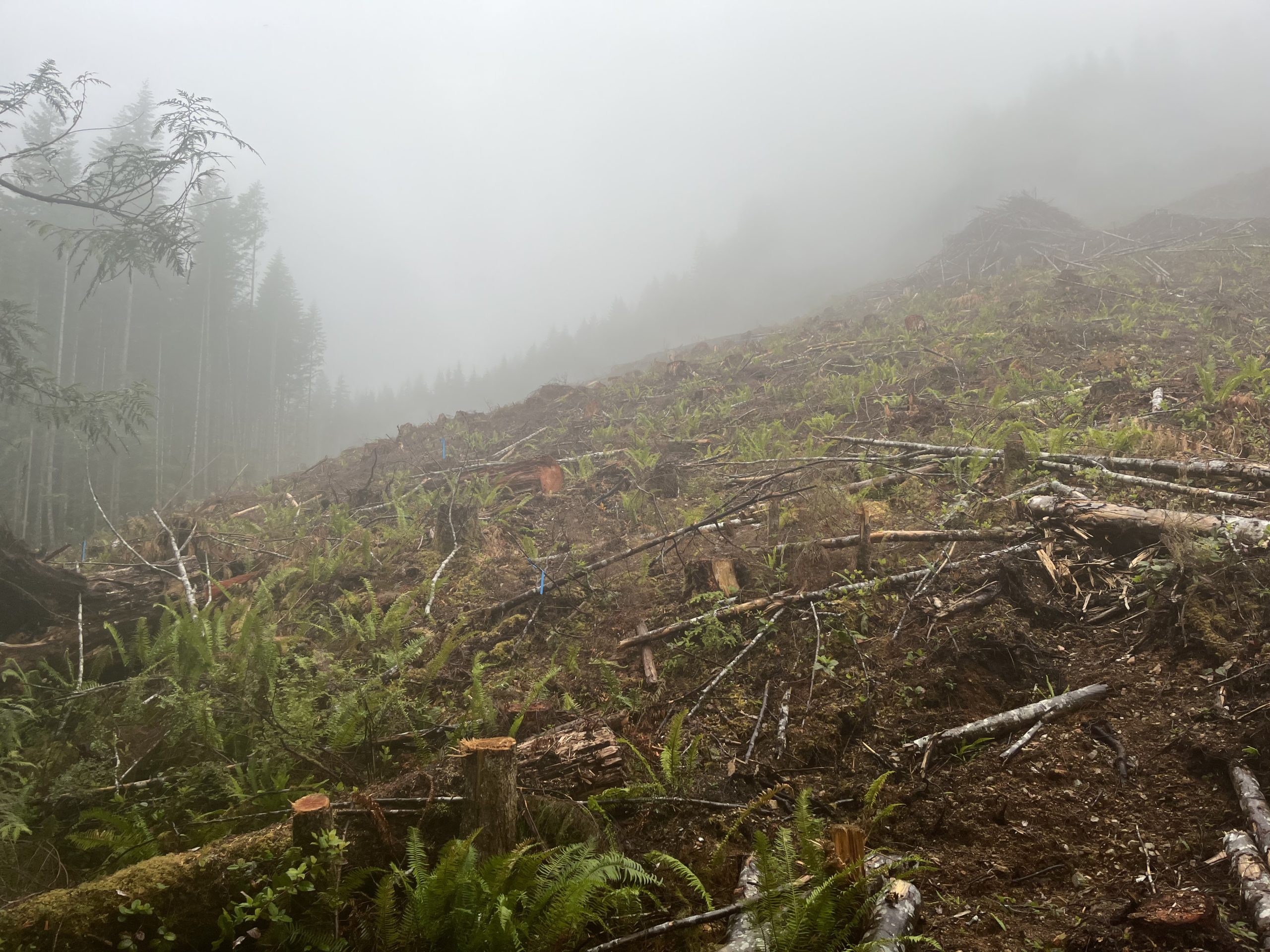 I’m not going to lie, the feeling of being so utterly alone – farther away from other humans than I ever have been before – was definitely getting to me. I’m a pretty independent person, and I like my alone time, so I wasn’t really prepared for when the fear of being so isolated hit me. Walking along overgrown two-tracks, I would wonder when the last time was that these places greeted human feet. Against my will, my mind started spinning, dreaming up ‘what-ifs’ and worst case scenarios. But, being alone, only I was around to console myself through my own fears, yet again. 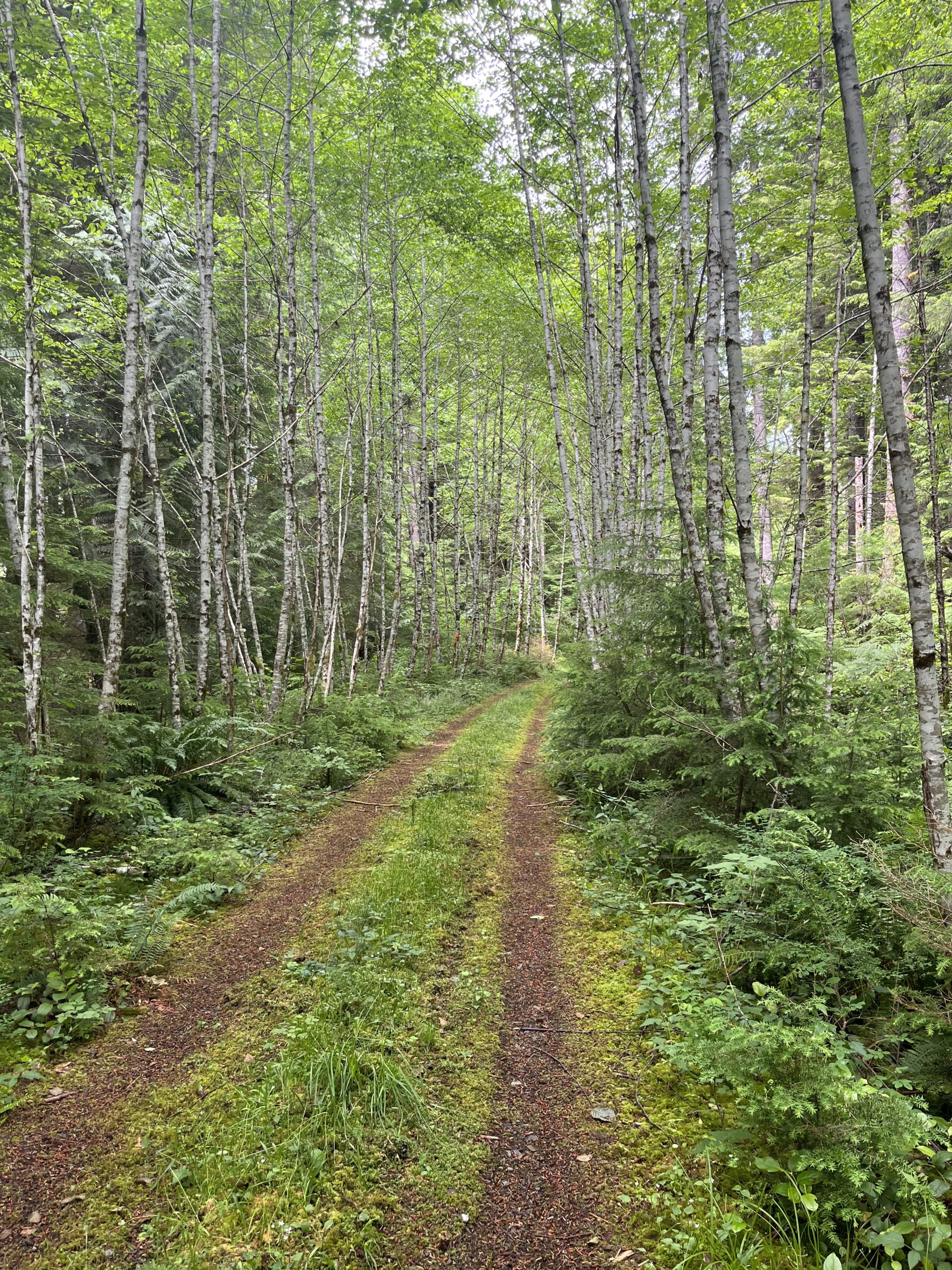 This was not the worst. Some had ferns and grass growing up to my ears on them.

On day 7, I covered a lot more distance than I had planned, partly because I didn’t feel like stopping in the rain, and partly because walking was better than sitting around for working through my thoughts and emotions. The thing about only having one thing to do in the day – i.e. walk – is that the simplicity of it leaves space for other things to uncover themselves, and sometimes they are not very pleasant. And because there are no distractions to hide behind, you end up having to face them, whether you like it or not.

Winding through the forest, and lack thereof.

By the end of day 7, I felt more relaxed. Maybe it was because I saw the faces of a few other humans – one couple driving a truck that stopped to ask me if I was alright, and one couple walking their dog who struck up a short friendly conversation.

Interestingly, as I’ve been walking these backroads and logging roads, I have had quite a number of drivers stop and ask if I’m okay or if I need a ride. I even had a West Coast Trail Bus guy offer me a ride, and a trucker with a load full of logs pull over and asked me if I was lost. It’s nice to know that people are willing to help. But it made me realize how uncommon it is to see someone travelling by foot on these roads. And with that, how unknown and little hiked the VIT is. 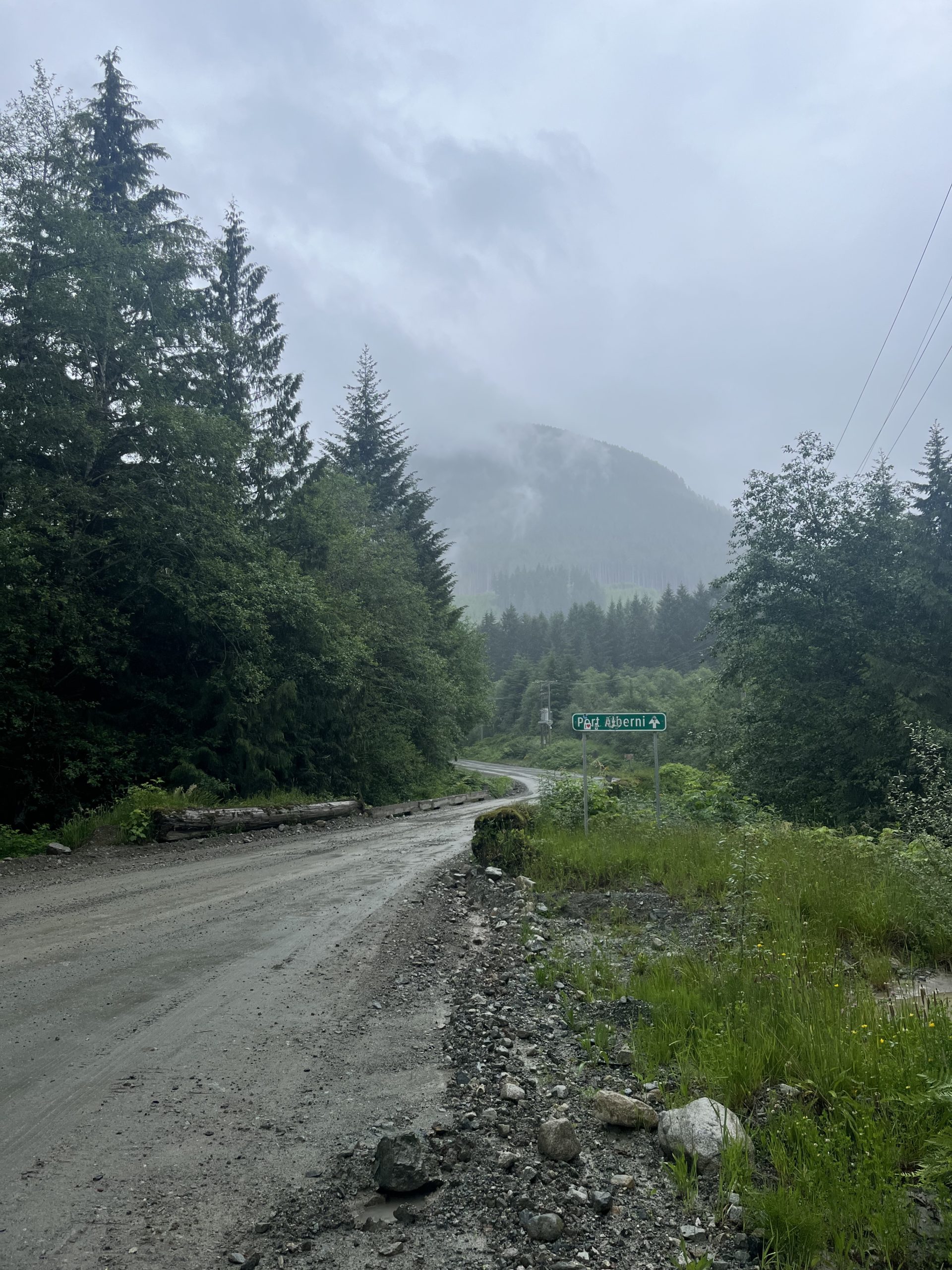 Backroads bridge to Port Alberni: my next town!

Ultimately, I ended up camping just off the trail near a creek. With the sun coming out to dry my soaked clothes, and the opportunity to taste my first salmon berry, it was a pretty good end to a mentally chaotic day. 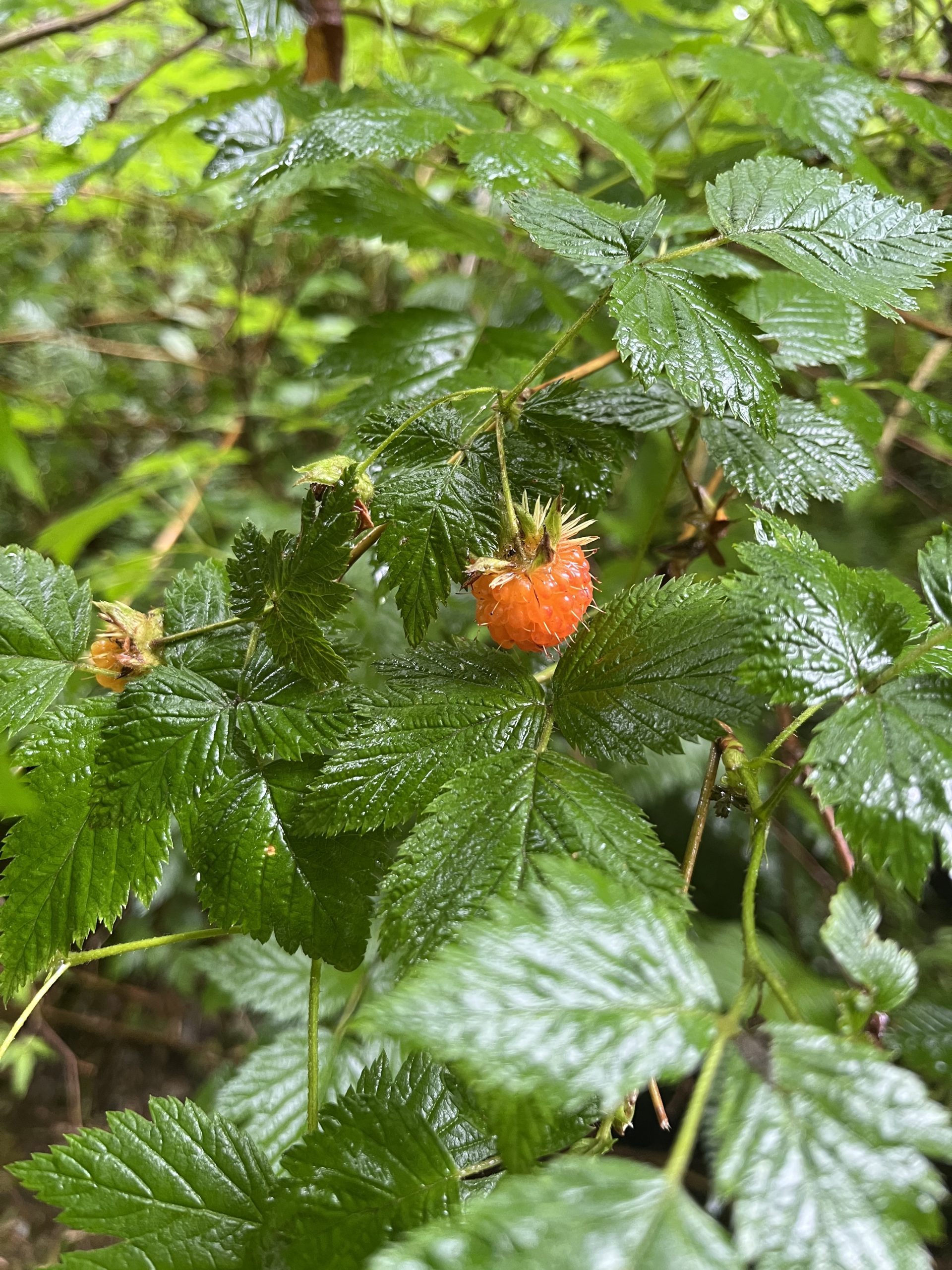