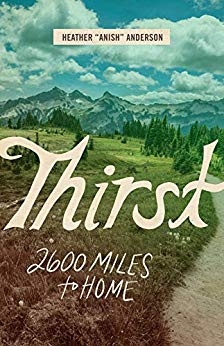 Thru-hiking legend and FKT (Fastest Known Time) record-holder Heather “Anish” Anderson’s debut book, Thirst: 2600 Miles to Home, hit the shelves in January 2019, and is already making itself known in the thru-hiking community. If you’re one of the few people who don’t know who Anish is, let’s take a look at the woman who has taken the thru-hiking world by storm since hitting the scene back in 2003.

Before we delve into the book itself, let’s set the scene. To truly appreciate Thirst, some background information on the author is vital. Heather “Anish” Anderson may be a household name now, but back when she started hiking in 2003, she hit the trail with little backpacking experience. After completing a summer job in Arizona, working for A Christian Ministry, the pull of the wilderness was too strong to ignore. Rather than completing college and jumping straight into the “real world,” Heather made a giant leap onto the Appalachian Trail. This thru-hike was just the start, and as of January 2019, Anish has accumulated over 30,000 trail miles.

In the past 16 years, Heather has made a name for herself within the thru-hiking and ultramarathon communities. As of January 2019, she became the first female triple-triple-crowner, “holds the overall self-supported Fastest Known Time (FKT) on the Pacific Crest Trail (2013),” “holds the female self-supported FKT on the Appalachian Trail (2015) and Arizona Trail (2016),” and became the first female calendar-year triple-crowner in 2018. She has also ran in six 100-mile races and dozens of 50k and 50-mile races, along with attempting the Barkley Marathons four times. More of her accomplishments can be found on her website, “Anish Hikes”.

Heather was never a natural-born athlete. She spent the vast majority of her youth immersed in literature and describes herself as “overweight, inactive and introverted.” She would secretly train for gym class in the hopes of proving her inner athleticism to her gym teacher, only to be accused of lying about finishing the two-mile run. However, those struggles served to fuel her fire, and in 1993 Heather made a goal for herself: to set an athletic record. Little did she know that she would go on to set many.

So what does it take to set a self-supported FKT? Heather’s book brings her struggles on the PCT, both physical and mental, to life. She faced dehydration, heat exhaustion, extreme weather, mountain lions, hunger, and self-doubt. Hiking at least 30 miles every day, with zero days off, will take a huge toll on anyone, but Heather pushed through it all. She was aptly given the trail name “Ghost” by other thru-hikers on the PCT, went through her fair share of dangerous weather, and had a close call with a mountain lion. Every time something came in her way, she confronted it, learned from it, and grew. The mountains broke her down and built her back up, as they do to every person who chooses to walk the path of a thru-hiker.

Heather has penned an account of what many thru-hikers go through, who many thru-hikers are, eloquently. To experience the extremes you can only find on The Trail, to learn from those experiences, and allow them to teach you, while pursuing an FKT, takes strength. However, Heather’s juxtaposition between who she was as a child and who she became, makes the reader feel as though anyone could pursue an FKT.

At this tree… A 15 year old dream came to fruition. Two years of planning and commitment paid off. 8 months of walking ended. At this tree… I became the first female Calendar Year Triple Crowner. I became the first female Triple Triple Crowner. I became the fastest female Triple Crowner (formerly @sageclegg ). All of these things are the terminus. But it is everything that has happened since I left Springer Mountain March 1st that actually matters. It is everything I walked through, learned, and who I became along the way. So right now, everything can be summed up in two important words: I’m Done. *** Incredibly honored to have Flyin’ Brian, the first Calendar Year Triple Crowner, drive 15 hours to surprise me and walk the final 10 miles of this journey with me. 👣👣👣 *** And for those that like specifics it was 251 days, 20 hours, 10 minutes . . . #CYTC2018 #DreamBigBeCourageous #Montbell #CDT2018 #continentaldividetrail #bravethecdt #withguthook #liveyouradventure #escapetoyourplayground #takelessdomore #BeTrailReady #womenwhohike #hikertrash #thruhiker #nuunelite

Heather’s poignantly written memoir of her time completing the self-supported FKT on the PCT in 2013 is a must-read, period. Whether you’re new to the world of long-distance hiking or have been hitting the trails for decades, this is a book that you will not want to put down. Having read it in its entirety in two days, I can say with confidence that it is well worth its humble price tag. Heather does a wonderful job saying just enough but not too much about her experiences on the PCT. Her book will most definitely inspire you to want to push yourself further both physically and mentally.

Heather serves as a wonderful example of what we are all capable of accomplishing, regardless of what hands we are dealt. Her ability to push past the negative comments, naysayers, and doubters, her desire to forge her own unique path, and the way she continues to remain humble and introspective while being one of the most popular individuals in the thru-hiking community, are beyond inspirational.