Woke up early in the morning to frost on the tent and a beautiful sunrise, with a view of Mount Hood in the far distance. The bear canister full of food and coffee was frozen, so it took some effort to open it. With coffee made and consumed, it was time to pack up and hit the trail. The day started off with the steep forest road—rocks and gravel created a blister situation on my already sore feet. The road was fine for foot travel, but I wouldn’t have wanted to drive it in a vehicle unless it was a heavy-duty jeep or some other high-clearance vehicle.

I was pretty low on water—I left camp with about half a liter. I figured it would get me to the Fourth of July camp if I didn’t find water sooner. Unfortunately, once I reached Fourth of July camp there was no water to be found. It was a nice open camp, perfect for car camping, with an expansive view. There could’ve been water there somewhere, but unfortunately there was no obvious source. I continued on to Springs Camp, figuring there would be a spring with plenty of water. I reached the junction to Springs Camp and took the one-third mile detour, only to find an overgrown “camp” full of bushes, tree limbs, and ferns. It was obvious that nobody had camped there for years and unfortunately I could not find water there either. I later found out from Steve Jones of the Chinook Trail Association that there is water there; it just required wading through the thick bushes and undergrowth. (A couple of days later Steve said he went there to check it out and cleared a section of bushes to make the water easier to get to —what a guy!) 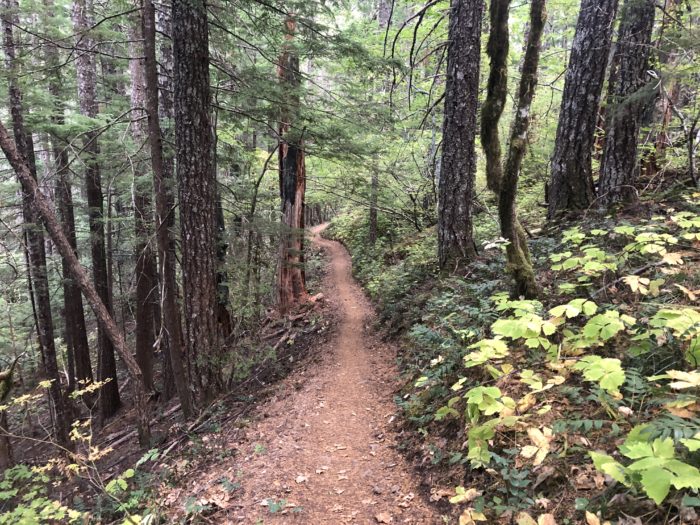 Frustration grew as I knew I needed water soon. I walked up the detour back to the road—by now I only had one inch of water in my bottle. Fortunately, about 1,000 feet down the trail there was a light trickle of a stream. It took about an hour to get two liters of water in my bottles, and I cameled up with another liter of water. I was so relieved.

After a few more miles I reached a junction where it was obvious they didn’t want vehicles to go—big trenches were built to keep cars from going farther. This stretch was fairly spooky—I don’t think many people use the section of trail. However, it was nice because the trail was softer, with dirt and pine needles instead of rocks and gravel. After a couple of miles I reached the junction with the Pacific Crest Trail. Compared to what I had hiked so far the PCT was amazing—it was so soft! It was well-maintained and the soft needles felt sooooo good under my feet. There was an gradual uphill, but then a long downhill to the Trout Creek camp. I passed several streams on the way but knew there would be plenty of water at Trout Creek. I reached the PCT camp there and it was beautiful, situated right by a bridge with a nice log to sit on and hear the trickling stream nearby. 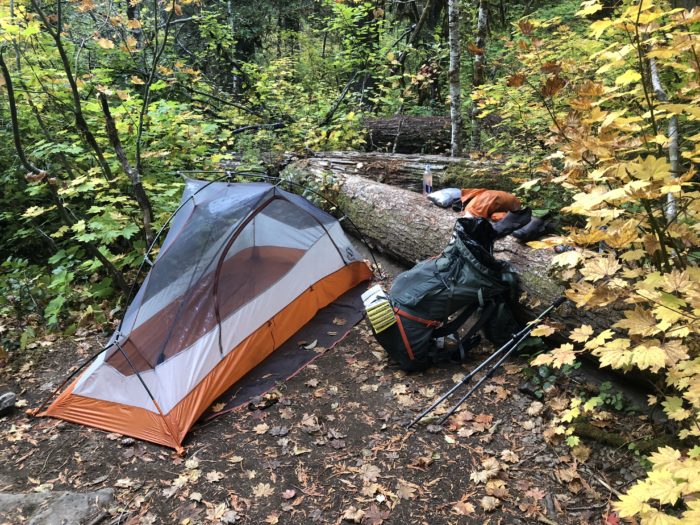 Hard Decision Made – Bail Out and Hitch to White Salmon

Facing another 20 miles or so without water (well, there was one reported source about halfway in that was a seasonal water source) I made the tough decision overnight to bail out at Panther Creek. While this decision ended the possibility of this being a true thru-hike, after the water scare the day before it was really the only decision I could make. The disappointment was lessened by the fact that this section of PCT trail was really nice, beautiful forest walking in total silence. After about two hours I reached the Panther Creek Bridge. I tapped the bridge with my hiking pole, knowing that I would have to come back someday to complete the trail.

I took a break by the creek, ate some lunch, and filled up all my water bottles and started walking towards Carson, WA. As I road walked I  approached a group of about 30 wild turkeys that walked down the road about 50 yards ahead of me. This continued for about a quarter-mile or so,  when a car pulled up and stopped. The car was beat up with junk all over the floors and seats and there were two dogs inside. Inside the car on the dashboard and on the doors were various positive, life-affirming slogans. The woman inside asked if I’d like a ride and I said yes—given the choice of ten miles of road walking vs. a quick hitch it was an easy decision to make. Despite appearances, she was very nice and we had a good conversation on the way. 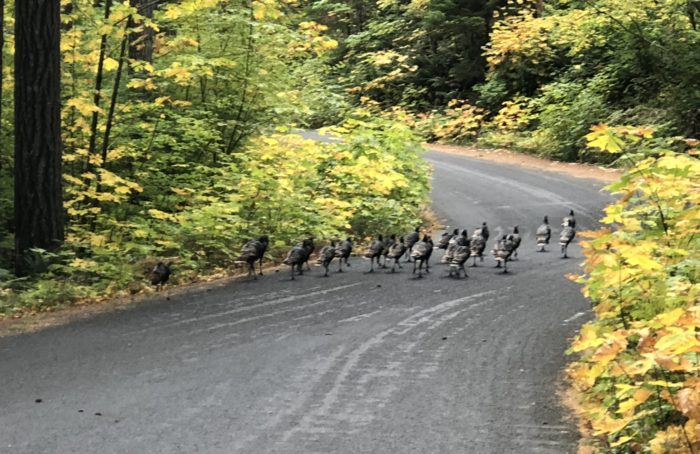 She dropped me off at the general store in Carson, where I picked up some fruit and yogurt and looked at different options. There is is a campground in Carson that I could’ve stayed at, but getting from Carson to White Salmon is not easy. There are no trails and road walking wouldn’t have been a good option either. I called Skamania Transportation and they offered a senior services shuttle for only four dollars. And it’d be there in ten minutes! The driver was super nice and great to talk to and the scenery in that section of the Columbia River was amazing. It was disappointing to see the section I was skipping, but on the other side of the river I could see where I’d be hiking in a few days, including the imposing Mount Defiance. 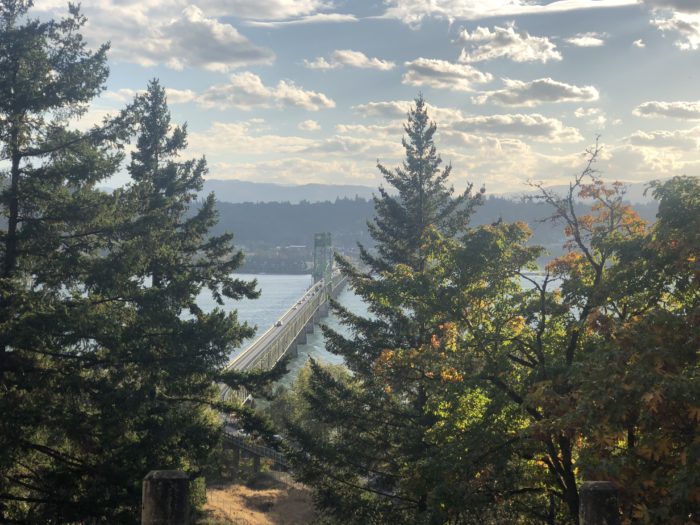 So far this hike I haven’t had a big appetite, but seeing Everybody’s Brewing across the street I figured I’d give a meal there a try. I ordered fish and chips, and chips and salsa, along with a beer—it was all very good. I ate all the fish, about half of fries and a few of the tortilla chips, but it was still fairly difficult to eat. No hiker hunger yet. For some reason it was also difficult to eat—the roof of my mouth was sore. I thought it was from mouth breathing eight to 12 hours a day, and it may have been, but it was probably a building cold that hit me a few days later. I hung out there for the afternoon charging devices before walking down to Bridge RV Park. It was amazing to camp at the RV park—it was clean and had showers and laundry. I finished the day by collecting my resupply box, choosing the food I wanted to continue with, and packing the rest back into the box, which I forwarded to Hood River.