Chinook Trail – Mount Hood to the End in Portland, OR

The ALDHA-West Gathering was a blast—met lots of great people, ate a bunch of delicious food, and was inspired by the stories of all of the thru-hikers in attendance. However, I wasn’t quite done with the Chinook Trail—I still had to get to Portland. But first, there was a slight detour that I wedged into my route planning for the trail—an overnight at the Overlook Hotel… I mean Timberline Lodge. It was a hike with 3,000+ feet of elevation gain, but it was only seven miles away so it would go fairly quickly. I left the Kiwanis Camp and set off on the Pioneer Bridal Trail, which ran somewhat parallel to the Mount Hood Highway on its way east. Had a few close calls with mountain bikers who were using the same trail, and trails that intersected it, but managed to avoid collisions with them. 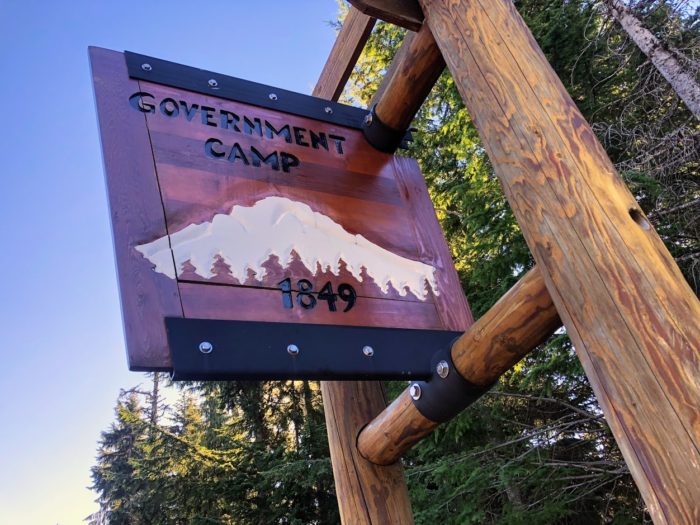 Made it into Government Camp and went to Charlies for breakfast and to watch the Seahawks/Raiders game that was played in London. It ended up being a blowout in the Seahawks’ favor, so I left early for a nice, sunny (and windy) hike up the Glade Trail up the southern slopes of Mount Hood. It was pretty steep at times, but with a slow and steady pace the miles went by quickly. Had a bloody nose on the way—not sure if it was elevation, dryness, or what, but took care of it quickly and soldiered upward. It was nice to reach some of the lower ski lifts of the Timberline ski area—it meant the lodge wasn’t far away.

Upon reaching the lodge I was anxious to take off my pack, wash my clothes, take a shower, and get some food and a beer. Timberline was an awesome place to hang out—had some great food (including a vegetarian field roast with potatoes and kale for dinner), and the hot tub was pretty amazing. Talked to some fun people at the bar about hiking and football (there was a great game on with the Chiefs and Patriots).

I woke up early to catch an amazing sunrise, with clear views all the way south to Mount Jefferson and The Sisters. While I wasn’t experiencing the hiker hunger that PCT hikers are dealing with when they make it to Timberline, I did want to partake in the famous breakfast buffet. Have to say, as a vegetarian it’s not great—mainly lukewarm eggs and potatoes, but if you’re hungry nothing beats a buffet no matter what’s in the line. Not feeling the need to hike back down the mountain, as these weren’t miles that were part of my Chinook Trail hike, I took a shuttle to Zig Zag, OR. There were a few miles that I didn’t hike that were part of my intended hiking route, but they were on the Mount Hood Highway. The section didn’t have much of a shoulder, and would have been fairly dangerous to walk, so I think I made the right decision. 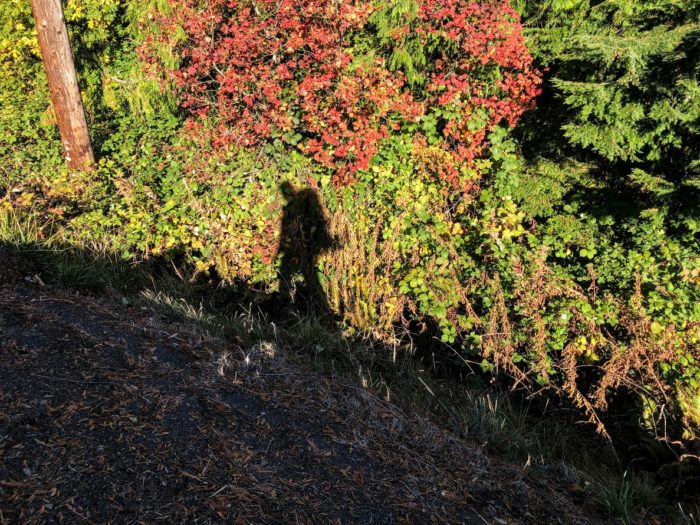 Once in Zig Zag I walked a route through a residential area that avoided the highway, for the most part. For the last couple of miles the highway was unavoidable, but it wasn’t too bad as I made it into the Mount Hood RV Resort. As expected, I was the only tent camper there and I was given a lonely spot in the woods to set up. Still, there was a heated bathroom nearby, so it wasn’t so bad. With no food options nearby I hiked back up the highway to the Whistle Stop Bar & Grill for a veggie burger and soup.

At this point I wasn’t really seeing the point of endangering myself by doing more freeway walking, when I wasn’t going to complete every step of the trail, so I took a shuttle that dropped me off six miles to the west. At Alder Creek there were back roads that would take me through Sandy, OR, and on to Oxbow Regional Park. The roads were nice and quiet, but nearly a century ago the same roads were part of the main route between the Portland area and Mount Hood, but were bypassed when the Mount Hood Highway was built. I talked to an older gentleman out on a walk near Cherryville (no longer an actual town) who told me a little bit about the history of the area. As I worked my way west toward Sandy there were more houses, nearly all of them fenced in with barking dogs behind their front gates. 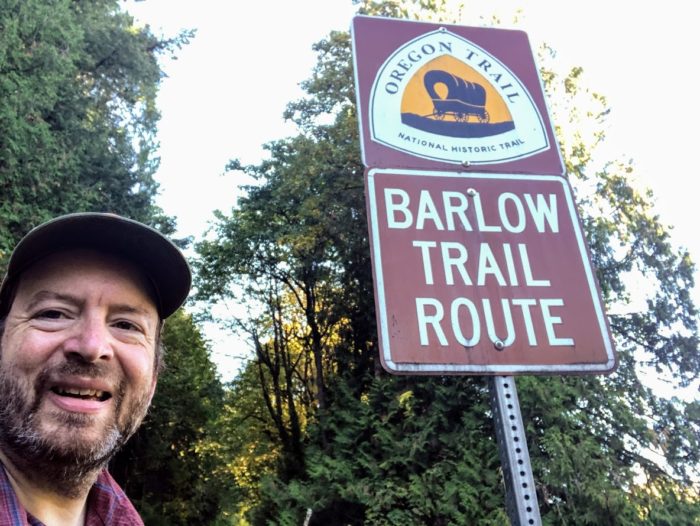 Upon reaching Sandy I was starving, and was really craving pizza (a whole pizza!). I stopped at Boomer’s Wall Street Pizza and had an awesome veggie pizza, garlic bread, and beer. I still had about ten miles to go, but it all tasted so good, and somehow it didn’t slow me down later. The workers there were interested to hear about the Chinook Trail, and one of them had done the Oregon Coast Trail recently. The hike to Oxbow Park was all road walking, and except for a great viewpoint of the Sandy River valley with Mount Hood now in the far distance, it was pretty uneventful. Upon reaching the park a helpful ranger assigned me a campsite, brought some firewood, and even called my wife at home to let her know I was OK (despite being only 11 miles from Portland there was unexpectedly no cell service).

Oxbow Regional Park To The End! (McMenamins Edgefield in Troutdale)

This was it—the last day of my Chinook Trail adventure. It was definitely a day of mixed emotions. I had found my hiker’s legs, my 30+ pound pack felt comfortable to the point where it was barely noticeable, and I was really enjoying myself. On the flip side, I was anxious to see my wife and kids again. Oh, and the road walking was causing all sorts of problems—my first blisters, and hamstring issues in my right leg. I was about to finish the Chinook Trail, yet I wasn’t because of the miles I missed earlier. If I had the opportunity I would have found a ride to Panther Creek in Washington and finished the miles I had to skip, but I had to leave that for another time. 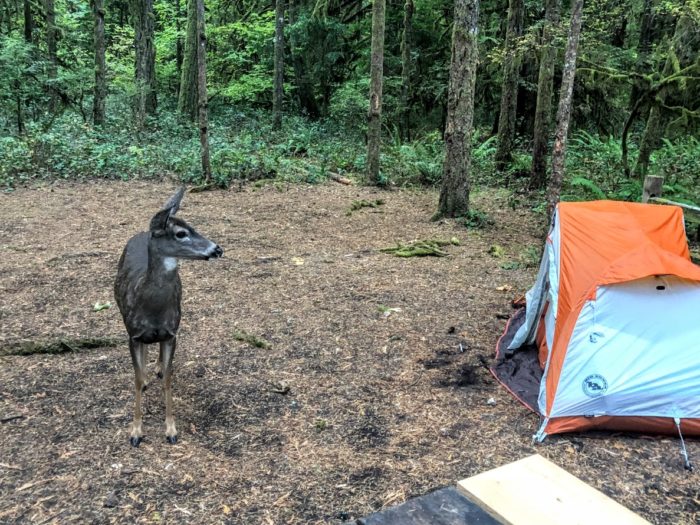 The day started with a curious deer coming into camp and scoping things out. I packed up and hit the trail out of Oxbow Park, then walked quiet, rural roads as I headed west. Unfortunately, the amount of traffic increased, and the size of the shoulders decreased, making the approach to Troutdale kinda sketchy. This went for about two hours or so—I had to duck off to the side every time a car approached. Upon reaching residential sidewalks, I knew the end was near—by this point I was only a few miles from Edgefield.

It was breezy, but sunny, and despite the pain in my feet and right leg I was enjoying this. In the distance I saw the water tower that rises above McMenamins Edgefield, and the emotion of what I had accomplished, and what was ending, hit me hard. There was so much uncertainty going into this hike—it would have been so much different if it were colder, or if it rained, or if I wasn’t physically up to it. Yet here I was, with the Edgefield sign in front of me—it was over! I went straight into the bar with my pack on and my hiker’s stench and ordered a beer. A nice older couple asked me all about the trail, and paid for my beer—trail magic! My wife later met me and we had a nice time at one of our favorite spots in the Northwest, and it was great to rest up and prepare for going home and back to work. 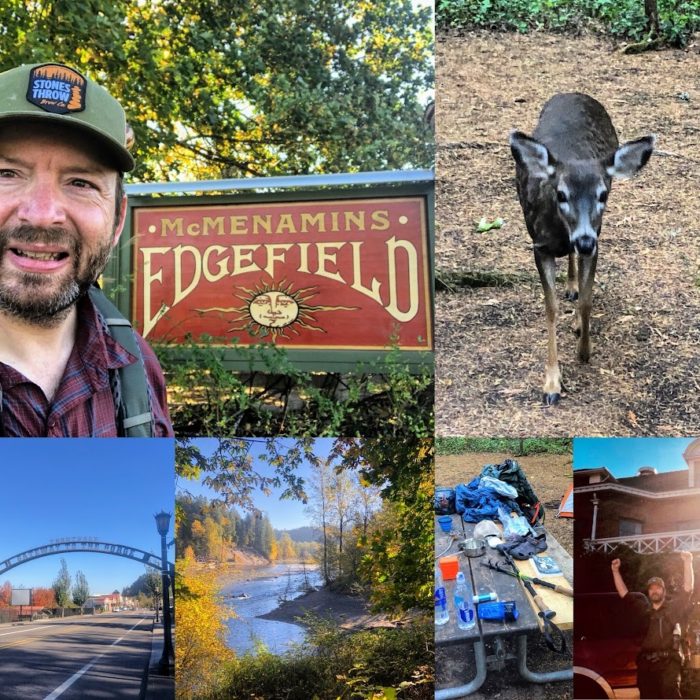 While this is my last post covering my 2018 Chinook Trail adventure, I do plan on completing the sections I missed in 2019. Once that’s done, I will write a final wrap-up post, as well as a guide with tips and recommendations for any of you who want to do the Chinook Trail. I will say that I highly recommend this trail for anyone looking for a thru-hiking adventure, but may not have five to six months to devote to one of the more famous long-distance trails. For more information on the trail, please visit the Chinook Trail Association website at: http://chinooktrails.org/