The pitter-patter of raindrops on my tent was as predictable and agitating as an alarm clock. On the boundary between sleep and wakefulness, I nestled into Matt’s neck and chest, which didn’t work very well because of our separate sleeping pads and quilts.

“Will it ever stop raining?” I sighed self-pityingly.

“Probably when we stop hiking,” He hypothesized before beginning the process of packing up.

Matt and I had developed a bad habit of sleeping in, and consequently, hiking late into the evening. By the time we had rallied, the other hikers we had camped with had already gone ahead. I felt a certain competitive impulse kicking in. My trail-runners decisively struck the earth underfoot as I rushed up the ascent, speeding toward the highest point on the Colorado Trail.

I passed by one hiker after another that moved at a more leisurely pace, oblivious to the fact that I was racing them.

They’d say things like, “Last one to Durango wins!” Or, “Shit, girl! Where’s the fire?” And I’d laugh and before hustling away.

Coney summit came into view, rising prominently above the treeline. The summit’s cloak of sage green grass thinned with elevation, falling away to reveal its innards of red dirt and black rock. The ascent switch-backed up a sharp bald that towered majestically above the smooth surrounding peaks. Because there were no landmarks to provide a sense of scale, the vista distorted my perception of distance and space. I dropped my gaze to the trail at my feet and focused on my breathing, relaxing into the climb even as my pulse pounded in my ears and throat.

At the highpoint, I realized there weren’t many miles remaining until I reached the southern terminus which marked the end of the trail. A wave of melancholy washed over me, leaving something hard aching in my gut once it receded.

Big Spork, Matt, and other hikers arrived one-by-one at the sign demarcating the high point. 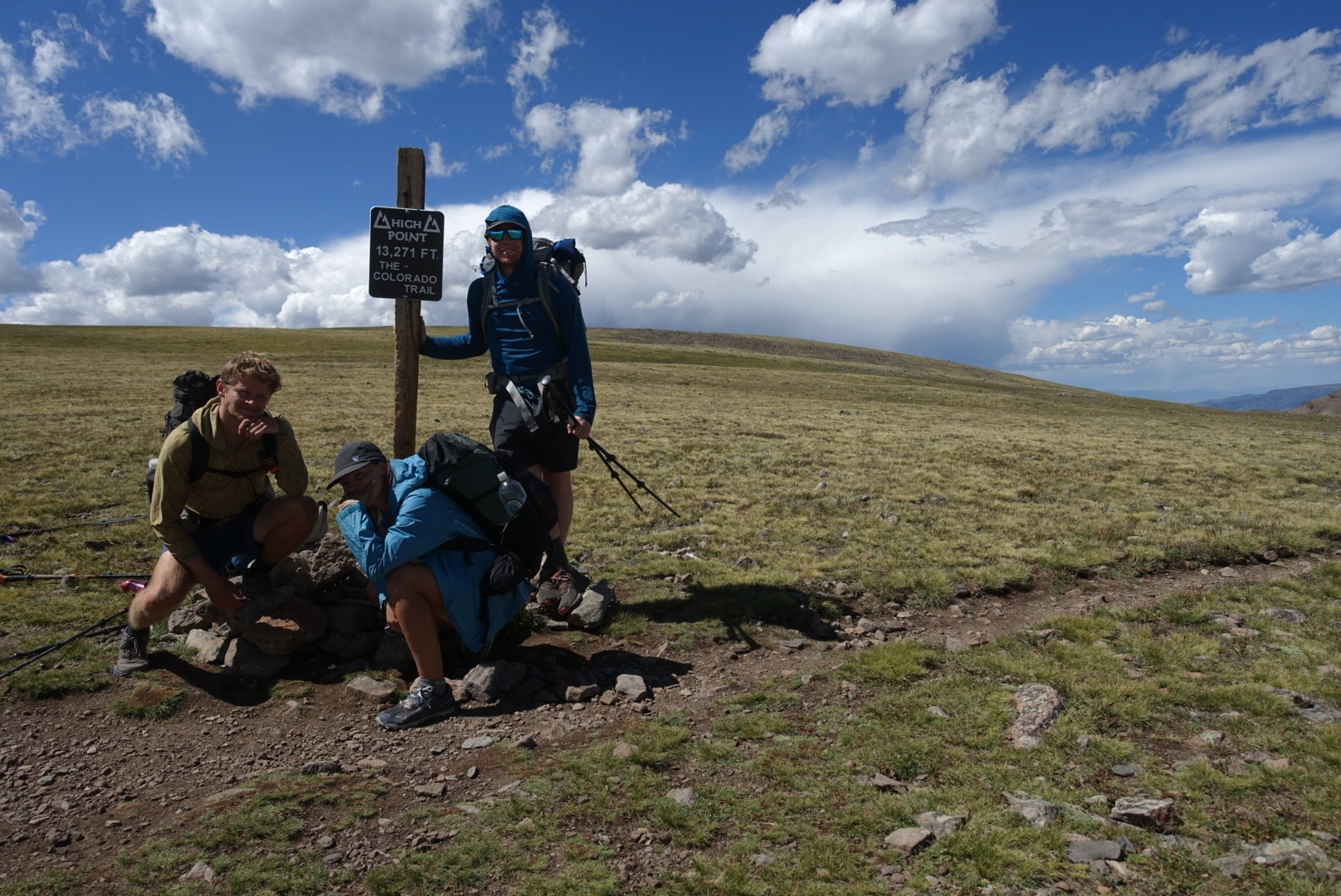 Matt, myself, and Big Spork at the CT high point.

“You know, we’re coming up on this beautiful lake. I think I’m going to eat some mushrooms and camp early,” Big Spork announced, already in the process of retrieving one from a ziploc baggie and tossing it into his mouth. He extended the open bag in our direction with a mischievous glint in his eyes, “Let’s celebrate. We’re almost finished!”

When the lakes came into view, I was awe-struck by one of the most glorious views I’ve ever encountered. Seated a couple hundred feet below the trail, the lakes’ iridescent bodies mirrored the blue-bird sky overheard. They shimmered with pockets of indigo, reflecting the soft green of the grassy mountainside, and the pink hues of the peach-colored sediment that formed jagged rock formations at their backs. Willow thickets marked the lakes’ boundaries, indicating thriving moose habitats.

On the hike down to the lakes, I felt as though certain boundaries within myself were dissolving. Waves of unnamed emotion would roll over me, then ebb away like the tide going out. Distracted, I misplaced my foot and rolled my ankle with a sickening twist. An involuntary, embarrassing yelp preceded my graceless tumble as I collapsed in a heap on the dusty trail. Shooting pains radiated along my tendons as I clutched hard at my ankle, waiting for the sensation to dissipate. Wanting desperately to be undeterred by my injury, I borrowed one of Matt’s trekking poles, and limped the short distance down to the lake.

As Matt, Big Spork, and I reached our desired campsite at the edge of a lake, big black clouds unfurled on the horizon. A storm system was amassing and moving with purpose in our direction. Big Spork, farther along into his trip, laughed carelessly into the face of the looming storm and shouted, “This is gonna be sick!” 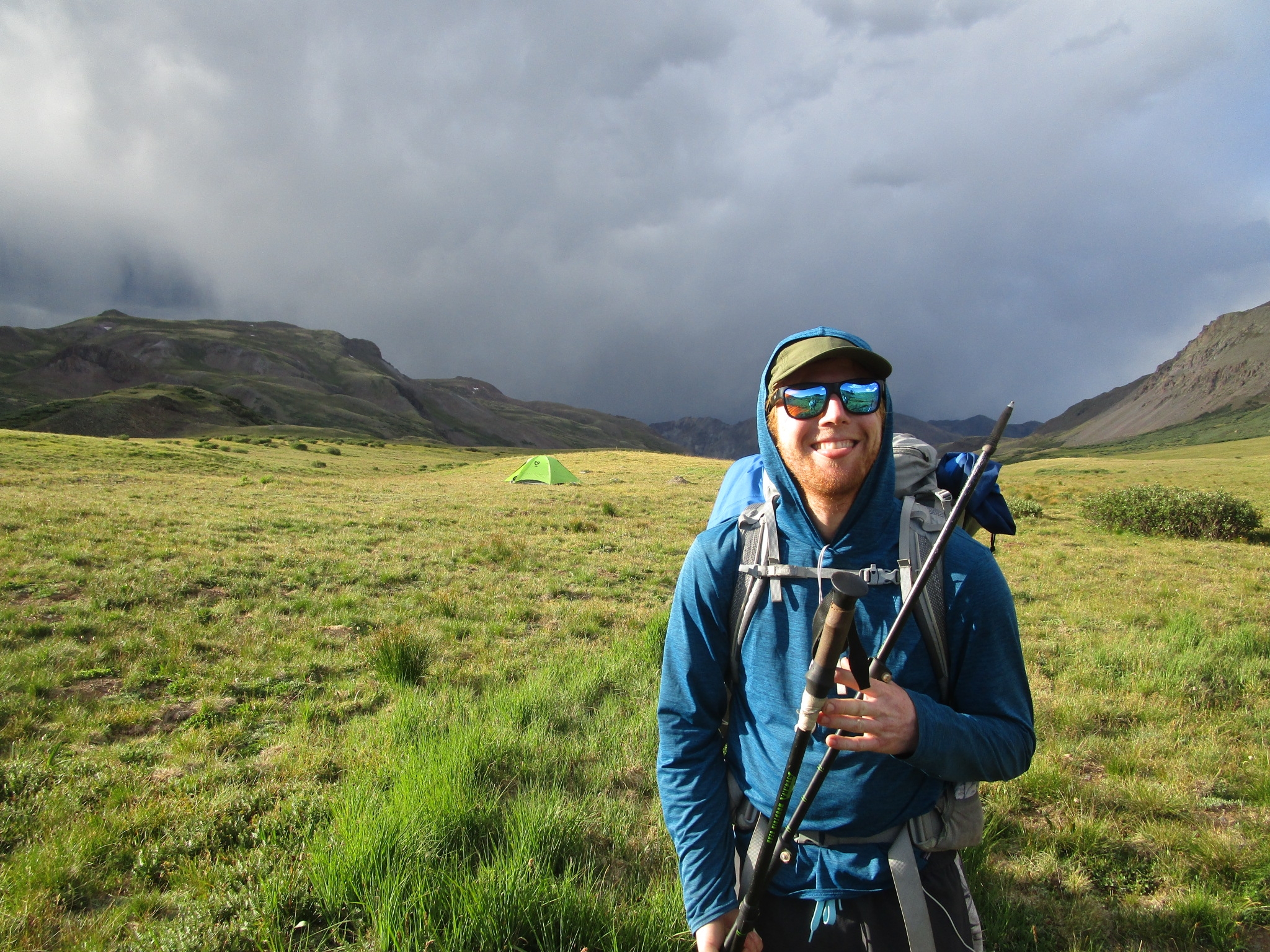 Big Spork getting stoked on the incoming storm.

It was both epic and terrifying to experience the dramatic temperature drop, the unrelenting wall of wind that rushed toward us without abating. I found that, in the San Juans, there were vast areas with few trees and little vegetation to slow the wind’s momentum. Matt and I struggled to assemble my tent, as the sheer fabric whipped into the air each time we tried to stake it down.

I haphazardly threw my belongings inside to weigh it down and felt the first raindrops begin to fall like chilly little kisses on my head and shoulders. Inside my tiny tent, Matt and I sat nose to nose. I attempted to hold the tent poles in place as the wind lashed against us, but the poles would bow inward, and I worried they might snap or that the fastening hooks would be ripped off.

Beneath the green hue of my rainfly, my skin seemed to assume a scaly, reptilian quality. I blinked at my hands and arms with wide eyes. Shouting to be heard over the storm, I asked Matt, “Do I look like a lizard?”

He laughed hysterically in response, the handsome smile lines around his mouth forming deep furrows of delight. I half expected his appearance to change through my distorted gaze, but he looked gorgeous and alight, just as he always did.

The storm passed as suddenly as it arrived. Just as a calm hush had fallen over the lakes, the noise and vibrations of heavy footsteps shook the earth beneath me. The force caused my limbs to tremble, even though I was elevated inches off the ground on my sleeping pad. Thinking a T-Rex was outside my tent, I sat up and opened my vestibule.

Nearly a dozen moose walked just yards from where I sat, like enormous velvety shadows gliding gracefully along. One stopped, then swung his massive, monochromatic head and paddles in my direction. A jolt of terror shot through me and I quietly beseeched him, “Please don’t come over here.”

We stared at each other for an indefinite stretch of time, until finally, he turned toward the lake, and plunged into the water with a couple of powerful paces. I sat there, watching the moose bathe and swim together. I watched as the sinking sun set the mountain tops ablaze before shrinking behind a stone outcropping. The waning crescent moon followed, arching over the rocky abode of the lakes and all the creatures that dwelt there. I waited patiently as the blue veil above turned lilac, then violet, thinning until it revealed the stars. They twinkled vigorously, pleased to be released from where they glint and gleam all day in secret. The Peace of Wild Things, a poem by Wendell Berry, came to mind:

When despair for the world grows in me

and I wake in the night at the least sound

in fear of what my life and my children’s lives may be,

I go and lie down where the wood drake

rests in his beauty on the water, and the great heron feeds.

I come into the peace of wild things

who do not tax their lives with forethought

of grief. I come into the presence of still water.

And I feel above me the day-blind stars

waiting with their light. For a time

I rest in the grace of the world, and am free. 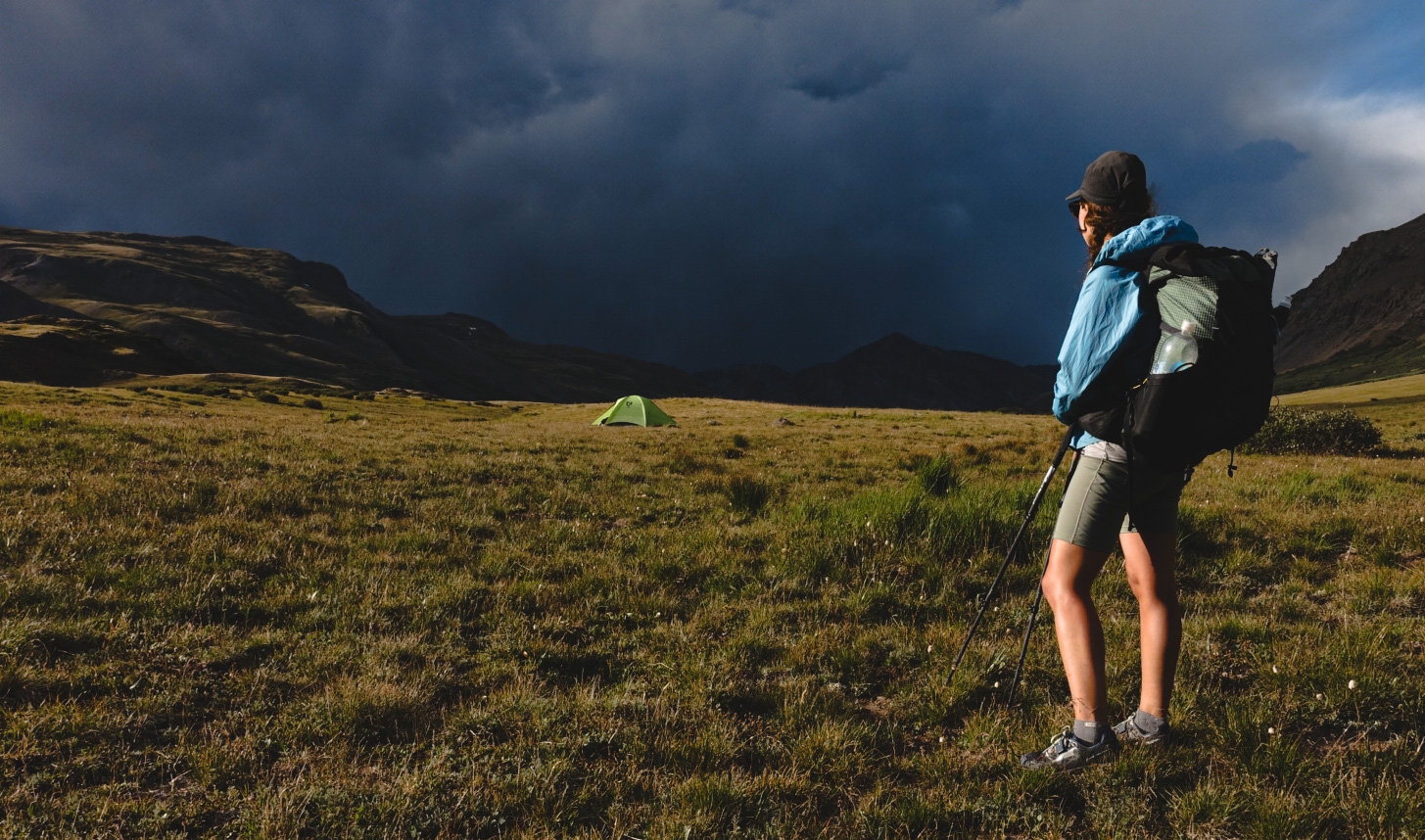